Mark: Hi, it's Mark from TLR. I'm here with Mr. Bernie Pawlik, Pawlik Automotive in Vancouver, 24 time winners of best auto repair in Vancouver as voted by their customers. And we're talking cars. How you doing Bernie?

Bernie: Well, this thing actually had a couple of things going on. Besides the plastic pipe, we also had a water pump leak as well. So basically the vehicle came to our shop with a couple of concerns, but one of them was there was coolant leaking from the engine. Did our usual diagnostics and testing, a pressure test, visual inspection, and found the water pump actually had a leak, as well as there was a leak somewhere under the intake manifold area.

Mark: So the unfortunately not so uncommon under the intake coolant leak.

Bernie: Exactly. However being a 2008, this is a redesigned engine from the previous model. We did a podcast about this, about an 06. Surprisingly in a week, we had two different models with two different styles of coolant leaks, but this is a redesigned engine, 4.8 litre V8. And the cooling system is definitely a different design. Actually, I would say better than the previous generation. Less complex. But any engine we'll have coolant leaks, but this had a similar thing under the intake manifold. So while I'm muttering along, let's have a look at some pictures and we can see the different design. 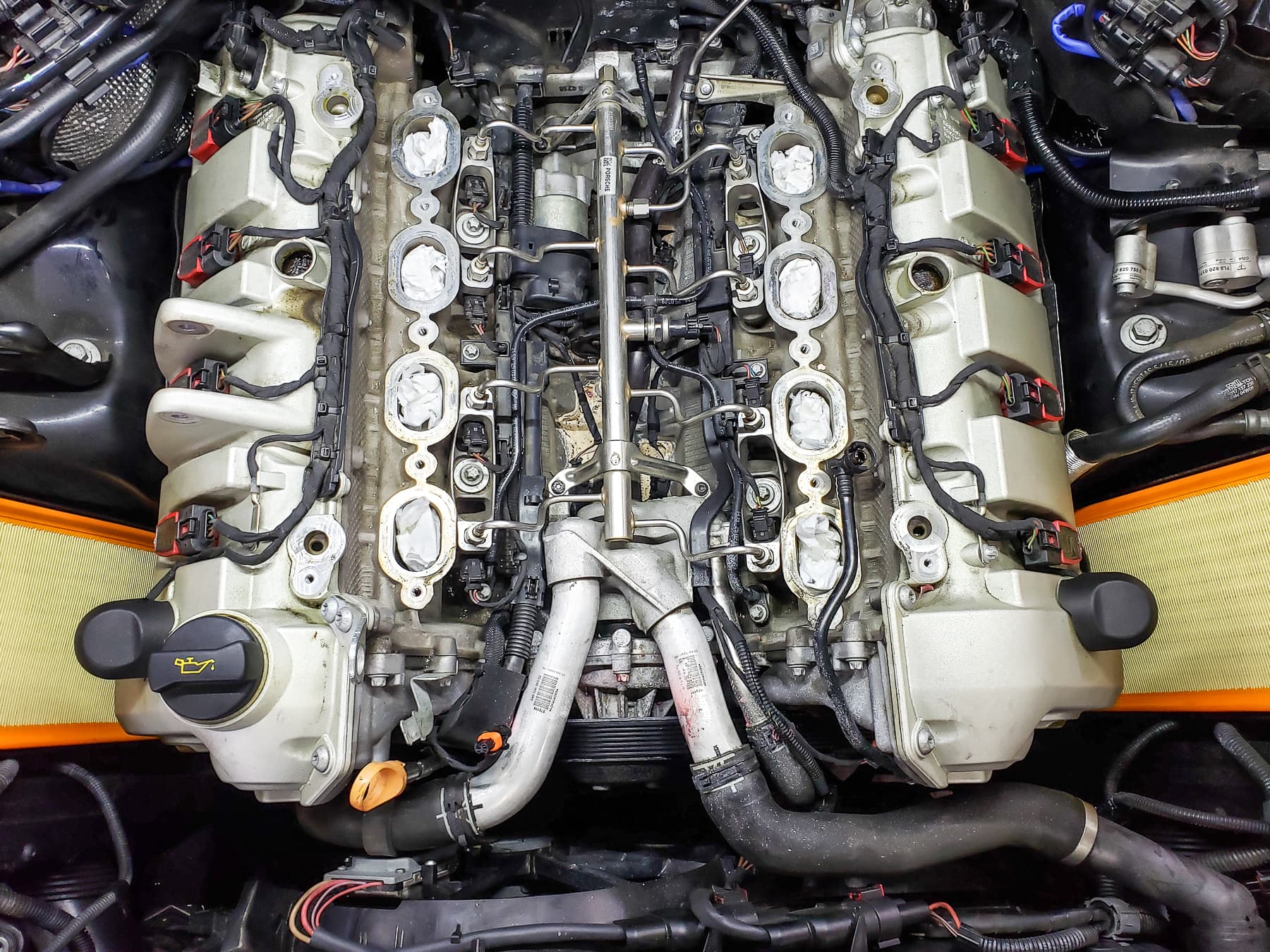 So that's a fuel rail now where the coolant pipes used to be. And there was an array of the original design had three plastic coolant pipes, small diameter pipes for the heating system and a very large diameter pipe for larger engine coolant flow. This has been redesigned. It still has a, a plastic pipe, but it's only one small plastic pipe that runs underneath this fuel rail which we replaced with a new metal pipe. 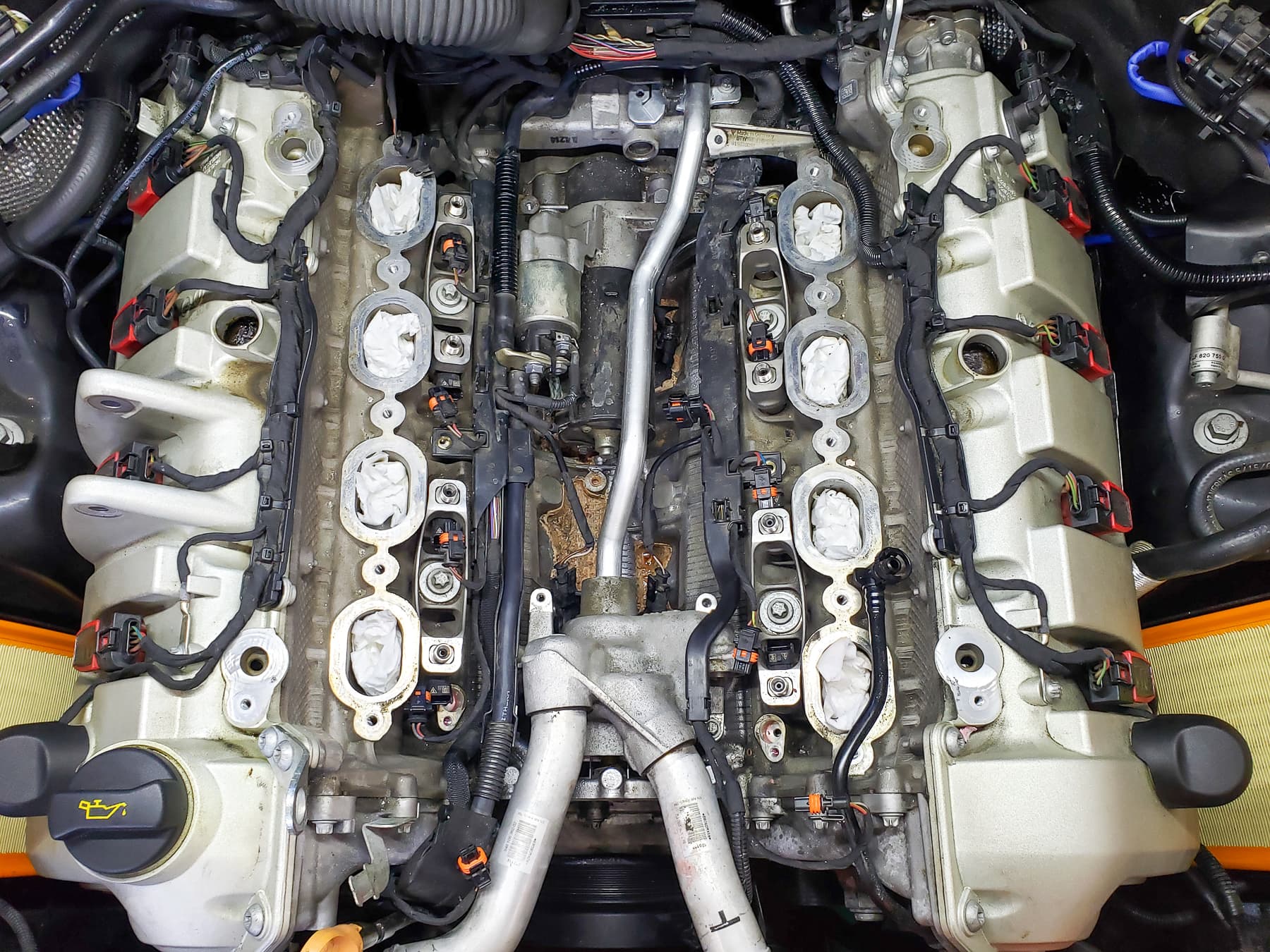 Here is the fuel rail off. This is the new replacement metal pipe. While we're doing the water pump, we also noted that it looked like there may have been a leak coming, not just from the plastic pipe, but also there's a little interesting fitting underneath this cooling system. 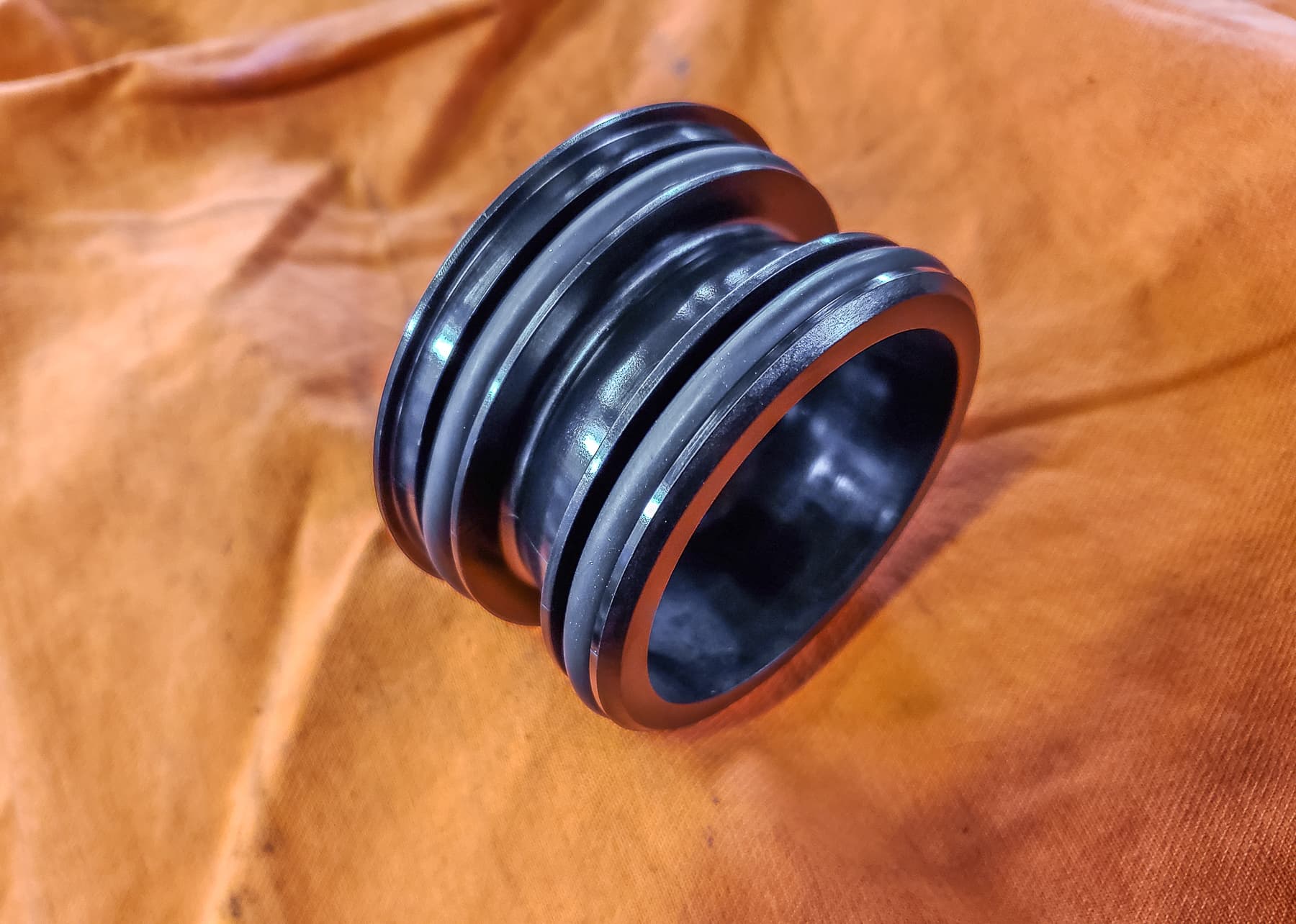 This fitting here actually holds the thermostat in place. It's a plastic fitting with two big, large O-rings. And when we pulled it out, the plastic had deteriorated and cracked, you know, just plastic, it's such a brilliant material in vehicles. I mean, it just, I know I'm being facetious here, but anyways, so this piece we replaced as well. And that basically, kind of interesting, it actually holds a thermostat in place between that and the water pump. 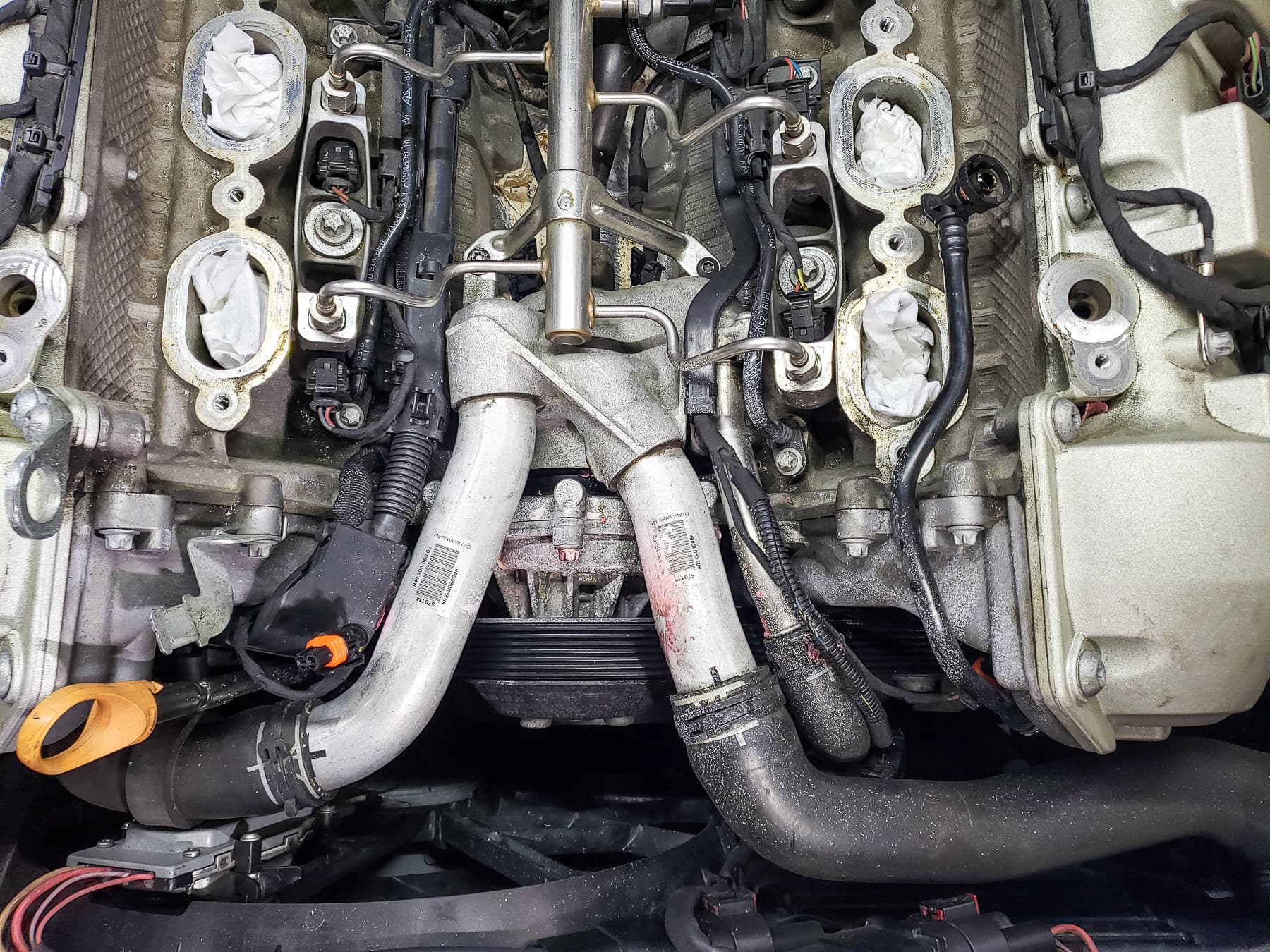 So here, this is before we replaced the water pump, you can see this little bit of a pink coating here. This is coolant that is sprayed up behind the water pump onto the cooling pipes here. So telltale sign that the water pump's leaking. And Porsche, they use a pink coloured antifreeze. So it leaves to kind of a nice little pink stain, wherever there's a leak which is helpful. So that's our picture show. Helpful in diagnosis anyways.

Mark: Is it a plastic impeller water pump?

Bernie: I'll be honest with you. I didn't actually look at it, but it probably is. A lot of manufacturers, European manufacturers use them. I didn't actually look. A lot of times when we replace water pumps. We actually use metal impellers and not plastic. The thing about plastic is they break suddenly. We've got podcasts and information on this, but you know, they'll just break suddenly and the engine will all of a sudden start running too hot. The good news is they don't overheat quite as immediately as if say you lost your coolant, but because there's no coolant flow it'll eventually get hot pretty quickly.

But you know, the thing with plastic is you can't see there's anything wrong with it, it's just broken internally. So again, you know, it saves ounces of weight, but I find it just kind of causes grief that may not be necessary.

Mark: So they've improved the design of this engine over the previous engine. How much did they improve?

Bernie: Gasoline direct injection of course, is a huge improvement over the port injection system, better fuel economy, horsepower, lower emissions. So that's an improvement in the way it runs. But I think this is a huge improvement in terms of the cooling system as well. I mean, it still has a plastic pipe, now we've replaced it. But at least it only has one and it's a small diameter pipe that isn't going to quite cause as a severe of a coolant leak as could happen with the other system. So it's a better design and I'd say more reliable overall.

Mark: So we know that this was probably a pretty big generational upgrade for the Cayenne. How's the reliability with the redesigned engine?

Bernie: You know, I hate to say we don't see enough of these vehicles in our shop for me to say, that this engine is way better, but, you know, I think from a design point of view, I like it a lot better. I think it's a huge improvement. I don't have the statistics on everything, but generally I'd say it's a lot better of an engine. If I was going to buy a Cayenne, I'd definitely be looking for this generation.

I don't really like the older ones are kind of a noisy, growly engine. Sounds like there's something wrong with them, even when they work fine. So yeah, I do like these engines better. Plus the direct injection, you know, just more power, better fuel economy. It makes a lot of sense.

Mark: And that's getting more and more important as the world changes.

Mark: If you're looking for service for your 2008 and newer Cayenne, the experts to see are Pawlik Automotive in Vancouver, BC, Canada. You can book on the website at pawlikautomotive.com or you can call them at (604) 327-7112. They'll find out what's going on with your vehicle. They'll get ready for your appointment.

And of course you can check out all the previous podcasts and videos that we've done on pawlikautomotive.com, hundreds and hundreds, all makes and models and types of repairs. Or our YouTube channel, Pawlik Auto Repair. We thank you very much for watching and listening. We appreciate it. And I appreciate you, Bernie. Thank you.

Bernie: And I appreciate you too, Mark, and appreciate all of you. Thanks for watching.