Mark: So today's victim is a 2008 Subaru Forester that had an AC problem. What was going on with his vehicle?

Bernie: Yeah, so the AC stopped working in this vehicle and the owner had actually come to us stating that he'd actually seen some oil dripping from underneath the middle of the car and he thought the evaporator might be gone. So obviously a knowledgeable client, with a bit of possible information for us.

Mark: So what kind of diagnosis and tests did you do next?

Bernie: Well, we do a standard AC diagnostics. So first of all determine is there refrigerant in the system which we found that there was none, pretty much none. Did a visual inspection up and down, you know, top side, bottom side, look at all the components of the AC system, the compressor, the hoses, the condenser, and try to look at the evaporator, although the evaporator's hidden under the dash. So it's difficult to see.

So that was a good diagnosis for an evaporator, because they're often extremely difficult to find. And often it's sort of a process of elimination. Well, you know what? We can't find any other leaks. I think you need evaporator and it's generally very expensive time consuming repair.

Mark: So you mentioned this evaporator was in the dash. We've seen some incredibly complex and difficult to get to, you're basically tearing the whole interior of the car apart, it seems like. So was this the case with this Subaru?

Bernie: No, it wasn't. And you were saying, it seems like tearing the whole interior apart. Well, the answer is actually for some of them, it's true. I know we did one on a Lexus a little while ago, and literally the whole dash, everything comes out like, you know, hours and hours of work to remove everything. But this one, Subaru is really nicely designed. The evaporator comes out really nicely.

We'll get into pictures in a couple of secs. Yeah. I mean, that's one thing I appreciate about Subarus is sometimes, you know, things are built simply and with actual repairs in mind. So let's just have a look at some pictures right now. 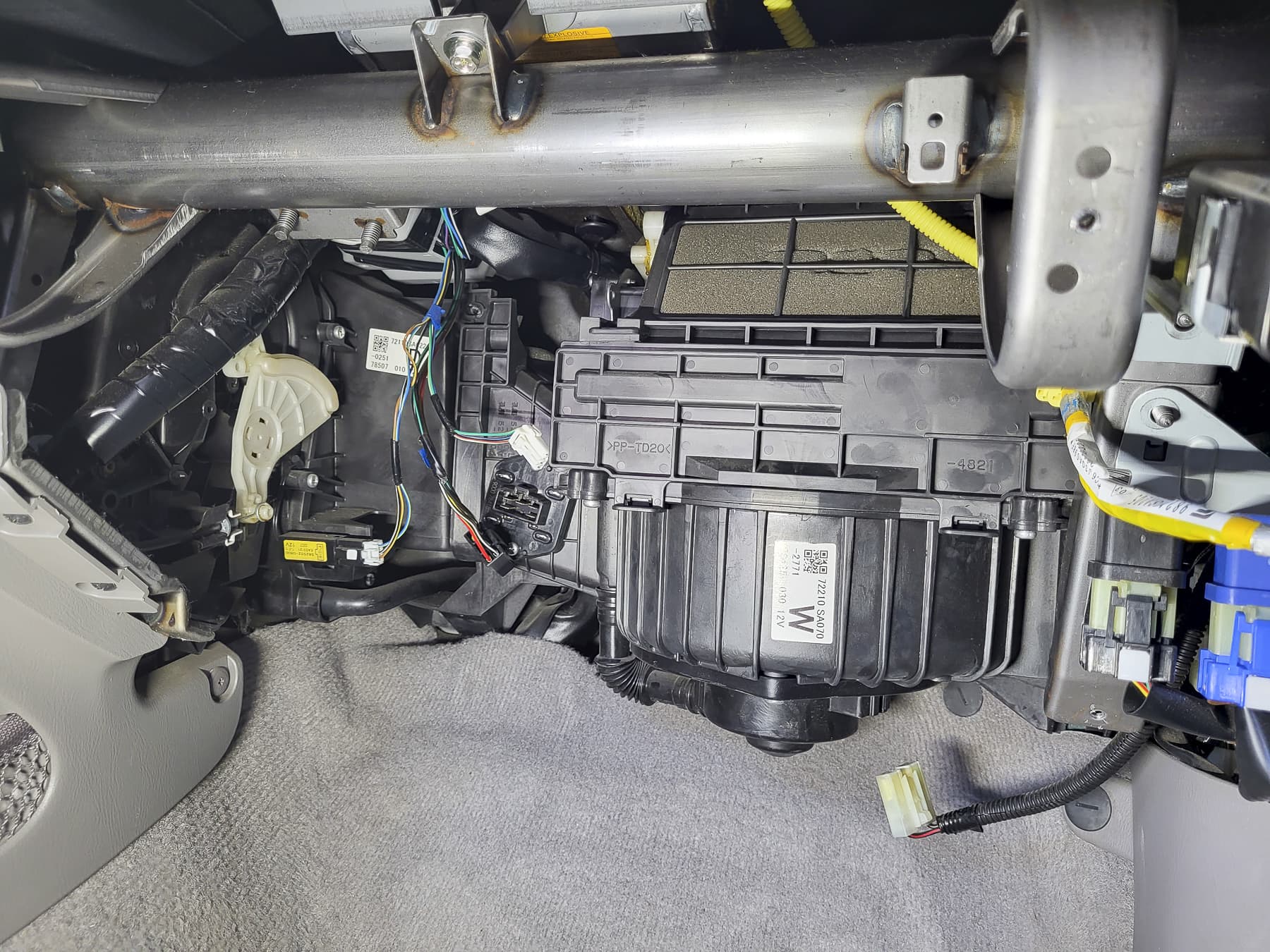 So, this is a look at the heater box with the glove box removed and this big metal piece we're looking at here, this is sort of a support beam for the instrument panel, the dash, obviously provides some structure in case of collision as well. So this here is where the, so imagine that the glove box sits here, if you're sitting in the passenger seat, the glove box is out. This is a view you're getting. This is the heater blower motor sitting under here.

The cabin air filter sits inside this little panel here where I'm moving my mouse pointer. So this box comes off and there's another little panel here and the evaporators just sits right in there. So no major dash removal at all. It's basically few components and things come out.

Let's have a look at the next view here. This is what the heater box out. And there's the evaporators located right inside this box here. There's pipes, which go to the firewall, the expansion valve, which is a component of the air conditioning system. Always bolts up to the evaporator sits right here. 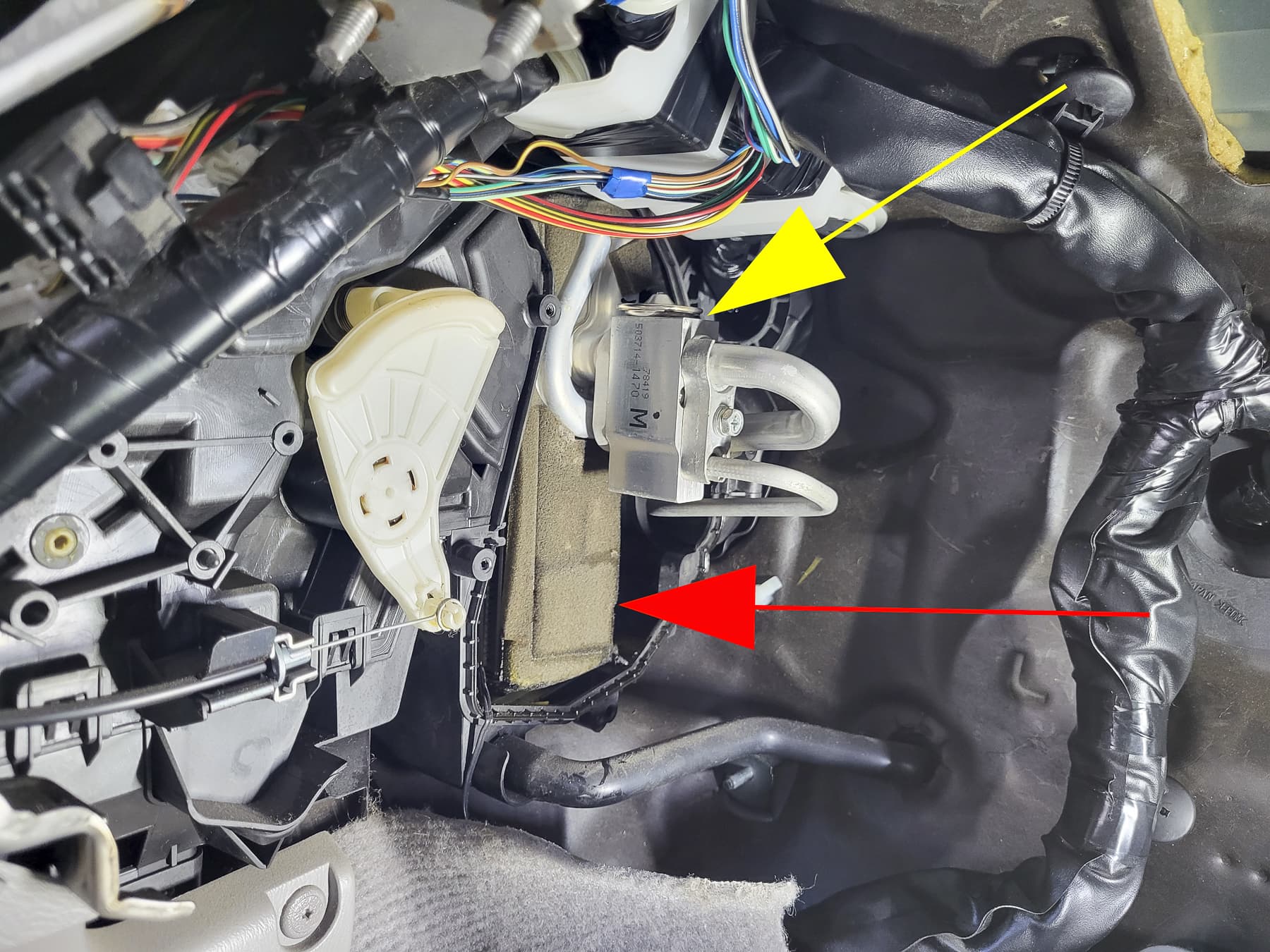 So all you have to do is remove this pipe. You remove the pipes from the front, that these tuck out of the way and the evaporator, not even any clamps, once this covers off it, just slips right out. So really pretty amazing replacement. 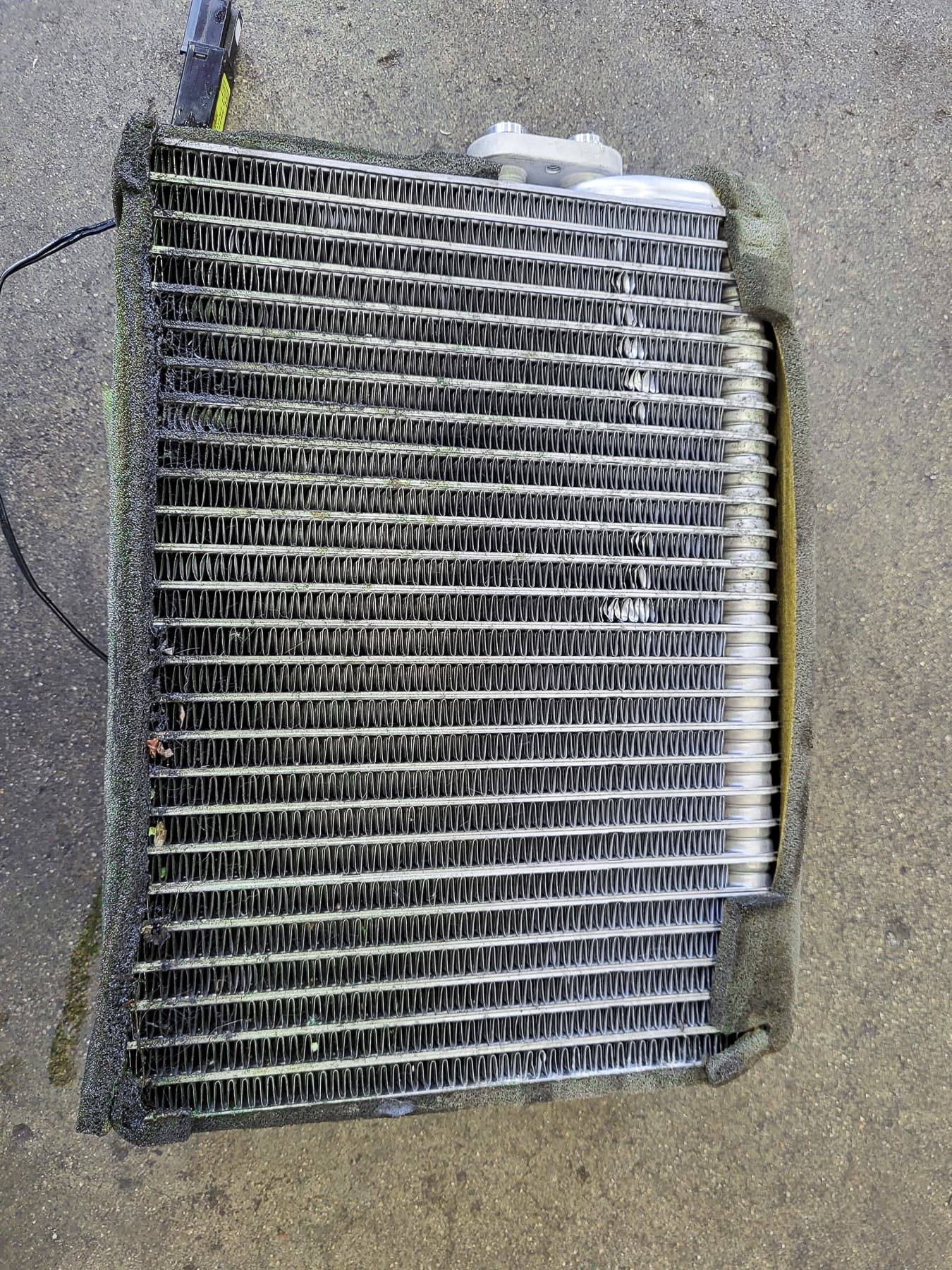 So then finally for last picture we can see the old evaporator core here. You can see kind of a greenish tint over here. This is where all the leakage was. So again, it's nice when things are confirmed. Now you can see, this is where the expansion valve was. So we're looking at the bottom of the evaporator here. This was extremely full of oil, so we had to clean the evaporator box out and clean the drain hose out to make sure there's no further oil because in future, it blows you don't want to have any evidence. You want to know freshly where the next leak is coming from. Plus you want to keep everything nice and clean. So we removed all the oil out of the evaporator box. Again, you can see these fins are all kind of darkened with oil, and that was our leak. So there's our picture show for the day.

Mark: So what happens after the core is replaced and you put it all back together?

And what it does is it basically removes as much moisture from the system as possible. You want the air inside the AC system, inside the piping to be absolutely dry. Any moisture can cause problems. It can cause freezing. So if there's actually like actual water mixed in with the refrigerant and refrigerant attracts water, it could cause freezing.

So as it goes into the evaporater, you could actually have freezing take place. Of course, water inside the compressor's not a good thing because it's a mechanical pump. And so anything that moves around doesn't want to have water, it needs oil. So we put it into a deep vacuum for about half an hour, maybe a little longer. Then after that we do a vacuum test for about 10 minutes. And then that basically determines is there a leak? If there's a vacuum leak, then we know we haven't solved everything and there's further repairs to do, but usually it passes and just because a passed the vacuum test doesn't mean the system is fully sealed, but it's one step. So after that's all done, the vacuum test is confirmed, then we fill it with the proper amount of refrigerant, charge it and test it. And the way we go.

Mark: How common of a repair is this on Subarus?

Bernie: Well, this is the first one we've done. And as far as AC leaks, not that I wish it one anyone, but if you need to have an evaporator replaced, it's a pretty good job to do in the Subaru Forester.

Mark: So in comparison, this seems like a pretty straightforward kind of repair for something that's, you know, it's a complex system and it can be really hidden within the vehicle like we've mentioned before. Is this another reason why you like Subarus?

Bernie: Absolutely. I mean, when I see this kind of thing, I appreciate the simplicity of the design and the ease of repair. And someone's actually thought about that. I remember years ago, first Subaru I bought was a 1980 Subaru. Just kind of a quirky looking car. I remember looking underneath it. And they actually cut little holes in the frame so you could tighten the oil pan bolts. I thought, man, that's thoughtful, you know, just little things like that. So can't say they're thoughtful for everything and they're cars are problem free, but they are a really good car. You know, practical and well thought out and well designed. I like 'em. It's on my recommended list.

Mark: If you're looking for repairs to your Subaru or maintenance, and you just want to feel comfortable with who you're working with the guys to see in Vancouver, BC, Canada, Pawlik Automotive. You can reach them and book online at pawlikautomotive.com. Or you can call them and talk to them. Someone will actually answer the phone, although they're busy. So sometimes you gotta leave a message and they'll call you back. (604) 327-7112 to book. You have to book ahead. They're busy. Always. They're always busy, very popular. Pawlik Automotive in Vancouver. Thanks Bernie.