Mark: Hi, it's Mark from TLR. I'm here with Bernie Pawlik, Pawlik Automotive in Vancouver, BC, Canada. Vancouver's best auto service experience. 23 time winners, 23 time winners of best auto repair in Vancouver as voted by their customers. And we're talking cars. How are you doing Bernie?

Mark: 2008 Volvo XC70 had some sort of power window problem. What was going on with this Volvo?

Bernie: Yeah, so our client brought the vehicle to us the left rear power window. Wasn't working also the door lock as well. And there were occasional times when it would work, but most of the time it wouldn't. So that's the issue we faced.

Mark: So what kind of testing and diagnosis process did you go through?

Bernie: Well because of the kind of car with modern computer technology, we hooked our scan tool up and we looked to see what sort of signals we're getting from the various switches in the vehicle. And from the drivers main switch, we could see in the computer that all commands to the power windows were as they should be and what we expected, but the window wouldn't work. And there's bi-directional control. So we were able to operate some windows, but we couldn't operate the left rear window through that control.

Mark: So digging into this now, how did you go a little bit further?

Bernie: So what we would do in any older car, without computer system that is pull the door panel off the left rear door, start testing the wiring. Inside there's a, it's a pretty complicated setup. I mean, there's your basic power window motor and door lock actuator. Like you'll find in any car that's been built in the last 50 years, but what is more complex is there's a door module. There's a module and every door a computer sends a signal from the body control module. When it gets a signal from, whichever switches, it gets processed through that computer and that will send the signal to the motors to actuate it. So that wasn't working.

So we had to do some testing on the wiring and the area that we tested, we test for basic power and ground. All those were present, but the one area that we started focusing on us, it's called a LIN bus system. It's a computer bus system, the communication system between the computers that control a window system.

So those were the next series of tests that we did because clearly that issue wasn't getting the proper signal. From somewhere. Either by broken wire, defective module or something in that area.

Mark: So, how do you test the LIN bus system?

Bernie: Well, we use a lab scope and I'll show you some testing. We'll just do a little picture show here. You should see a picture of a nice silver Volvo. 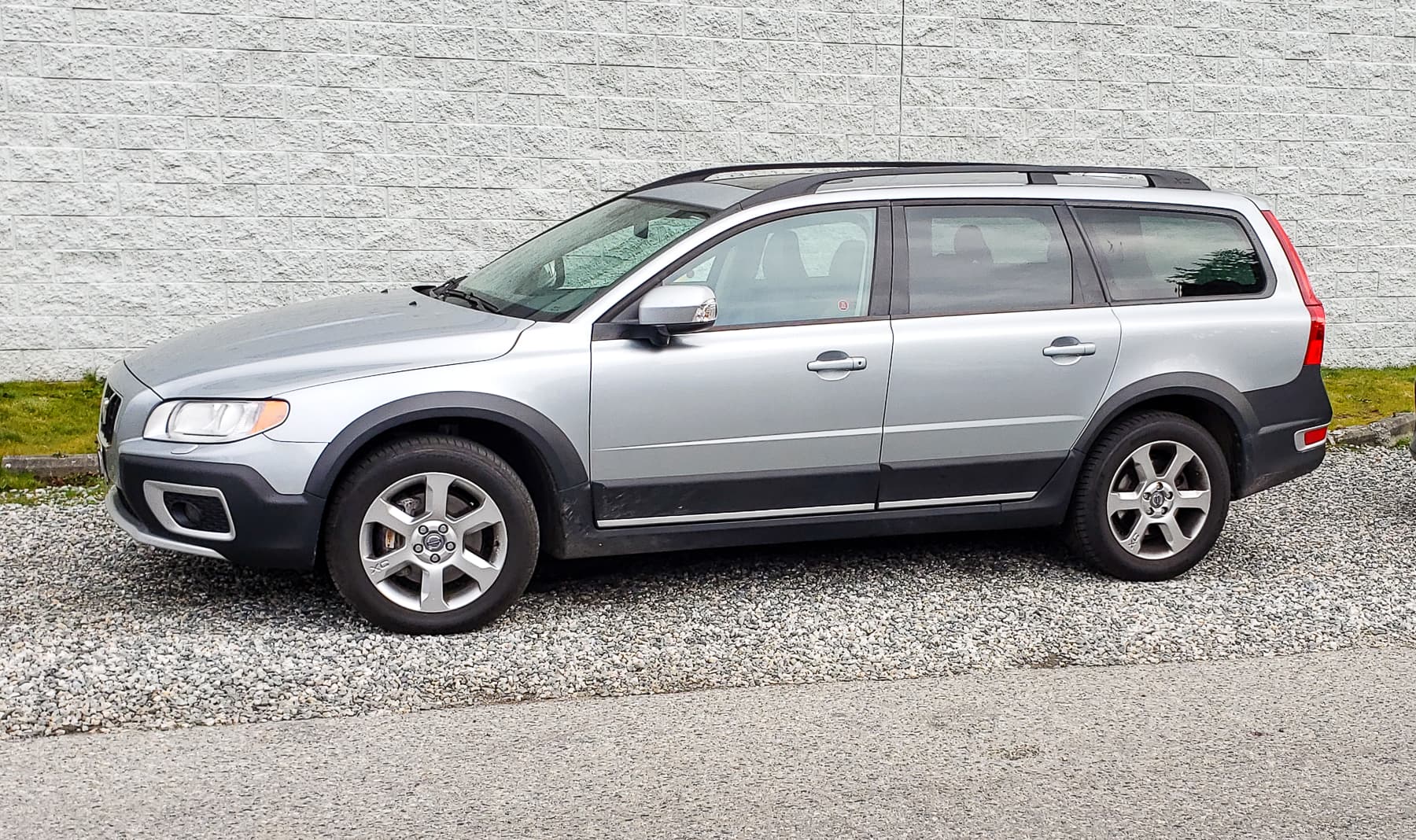 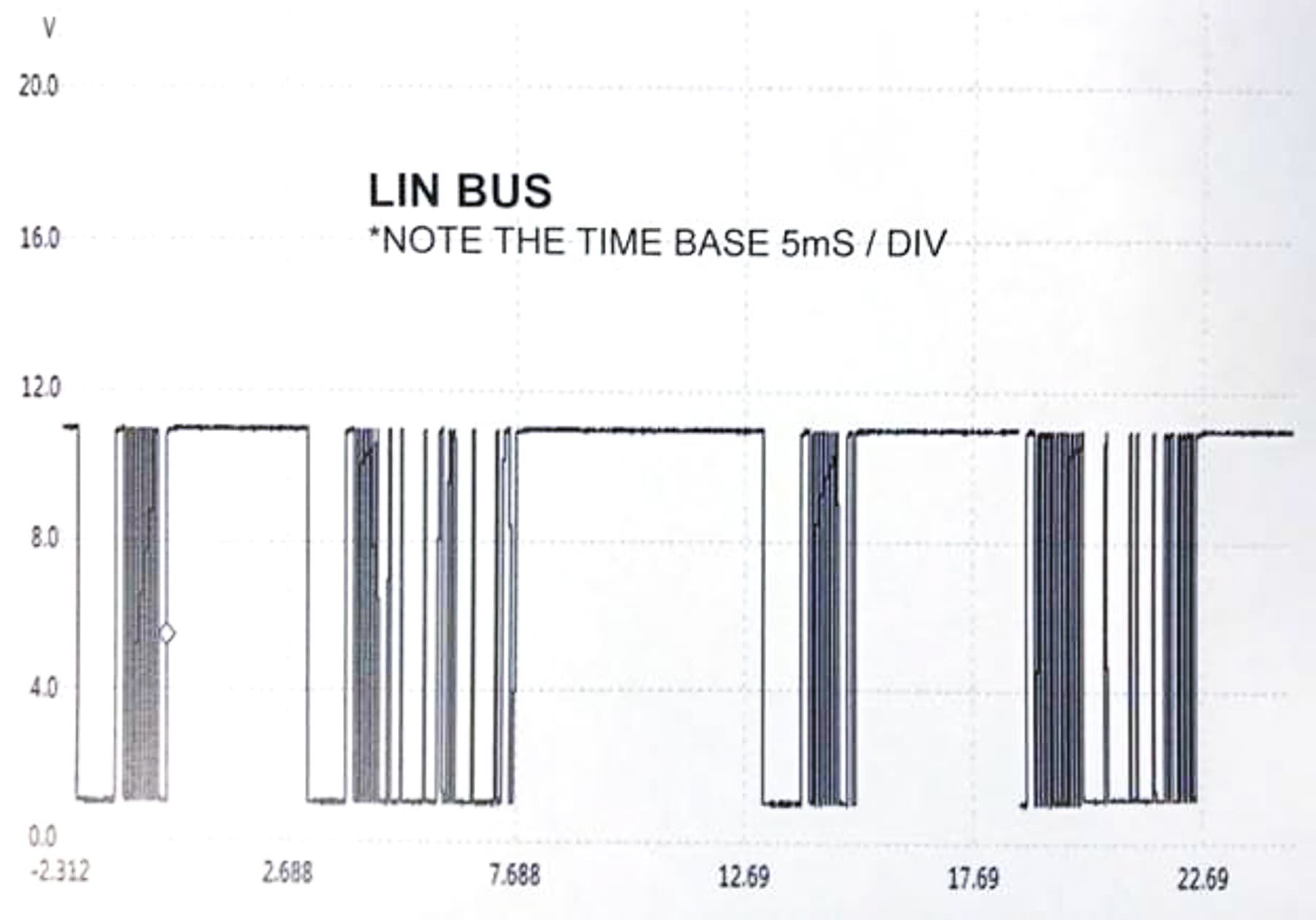 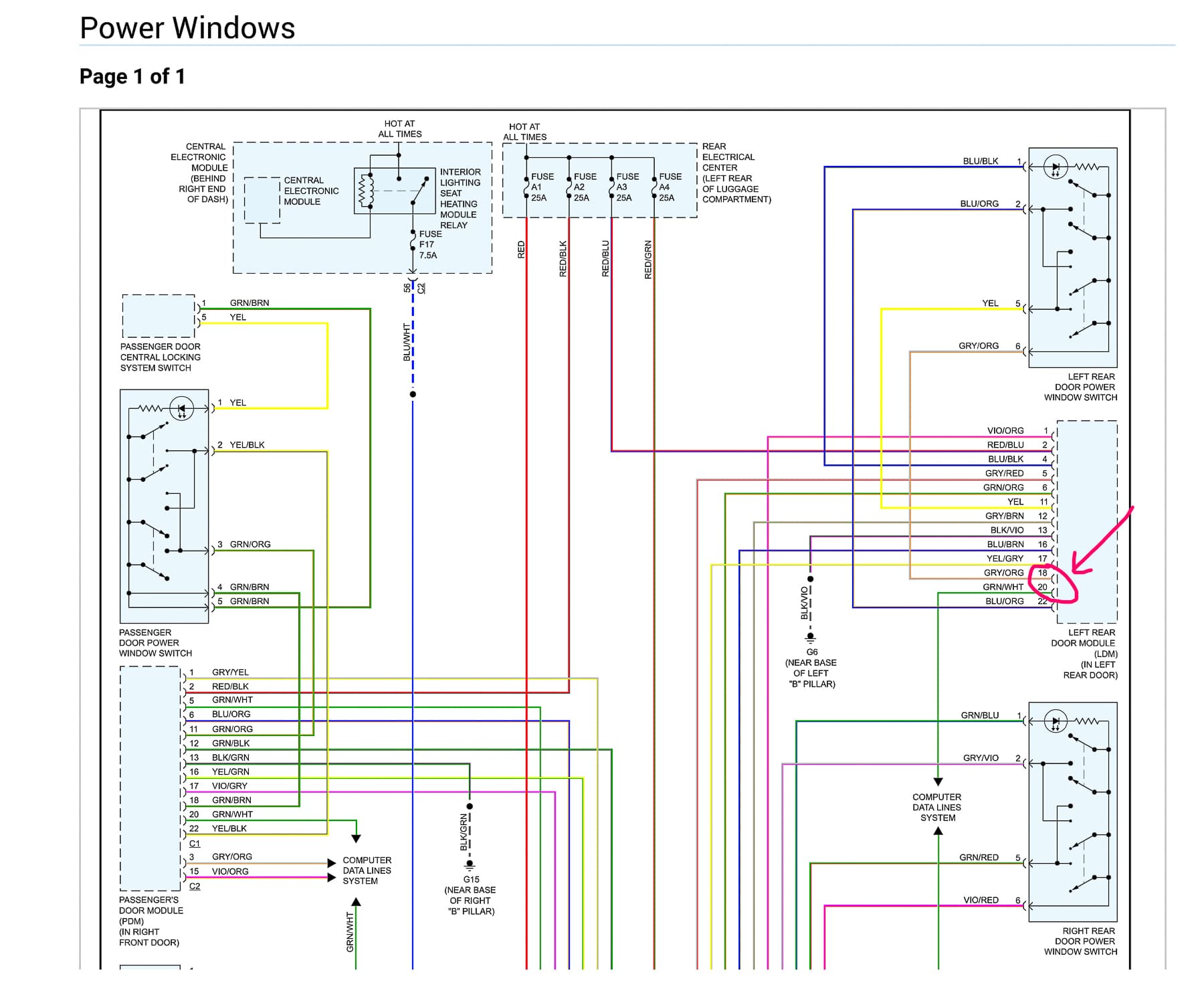 So this is basically on a lab scope. A lab scope is basically, it tracks time and voltage, and you can see at this point, this is a zero volts. This is 12 volts, and somewhere around little under 12 volts, maybe 11, is the highest voltage you get. And about one volt is sort of the bottom end. And this signal will switch. Back and forth in various patterns. But it's key to have these fluctuations.

Now what we were getting when we hooked our test probe up to the LIN bus wire on the left rear module is it is basically stuck at 10 volts. It's just a solid line going across the screen. Obviously a problem. So we pulled the driver's door panel off where the door module is, and we found it, it had this signal that we're looking at here. We unplugged the other door modules to make sure there wasn't anything going on there. There was no signal coming from the LIN bus system to this door module, probably a broken wire somewhere along the lines. So that's kind of how the diagnosis goes. It's time consuming. That's basically what we found.

Just kind of an idea here. This is a wiring diagram. I always show these because I really like people to know the complexity of what we're dealing with with a car. It's not just a matter of let's plug our scan tool in, Oh, there's the problem. You know, here it is, let's fix it. This often takes a few hours worth of dedicated time to fix these issues.

So this is just one example, but this is the left rear door module. You can see there are about 20 wires going in and out of this. Powers, grounds, signals, power to the motors, power to the power door lock. And in this one, wire that I've circled here. It says computer data lines, that's the LIN bus line.

This is where it's supposed to get that fluctuating signal, which it was not. So those was our diagnosis. So you probably wonder what did we do next?

Mark: What do you do next, Bernie?

Bernie: So we kind of figured, at this point, you've got to kind of think, well, where would the most likely chance of a broken wire be? And it would probably be the driver's door because that gets opened and closed more times than anything. It gets the most exercise and gets the most wear. So we start pulling wiring apart part that went into the driver's door through the door jam and we found a broken wire. And here's a couple of pictures.

So the red arrow points to our broken wire here, which is part of this connector, main connector to the driver's door. And finally, one more shot again. You can see the wire broken. Yeah. So we basically repaired the wire, soldered, heat shrunk, extended it. We do whatever we need to do to make sure it's reliable and will last for another 10 15 years. And that's basically the repair done. After that everything came back to life in the rear door.

Mark: Essentially the LIN bus, that your scan tools, when you're checking things are going to point in a general direction most of the time. Without being very specific about, okay here somewhere in these miles of wiring, literally miles of wiring in the car, hidden in all kinds of cavities all over the place. There's a problem in one of these somewhere. It'll tell you perhaps which one, but it won't tell you where. Is that right?

Bernie: Yeah, absolutely. The scan tool really is just a direction of where to go for repairs. And interestingly enough, I mean, we have a tech support team with the scan tools we have, and we will often call them or send a data file in saying, Hey, here's what's going on. Have you got some thoughts or suggestions. Because most of these things we find are first time repairs, and there's a whole team of people that we have. So when you come to us, you've got that backing of a lot of experience. You know, which is what you get at either dealership, manufacturer level on some of what we have is probably even better.

But anyway, so we sent the file off with these particular trouble codes that we obtained out of the computer and the tech rep who is helping us suggest that it probably was a module because that's almost always what goes wrong. Well, you know, if we just go, let's just change the module, we would have wasted the customer's money and been doing more diagnosis for free.

So from there it just gives us a direction to understand how the circuit works and the information, and then we can go from there. So, you know, some repairs are simple. A lot of them are not, I think it's just important to know that  when you have something that's going on in your vehicle.

Mark: And plus part of it's experience, like being able to know that, Oh, the rear window isn't working, let's just tear the rear door apart. And then maybe we'll find it kind of the guess and by golly method of diagnosis, which you don't use. No, we don't use. Basically a more thoughtful, true problem diagnosis way of finding the actual issue.

Bernie: Yeah. It's very important to do that and follow a structures and procedures and that's the best way to find the issue and sometimes you go, okay, well let's just start at where it's most probably a problem and which we did the driver's door and that's where it was.

I mean, we could've started tearing the wiring apart at the rear door and through the rest of the vehicle, but it's, again, it's like probabilities of where are things going to happen? You know, the other area, when we find a wiring issue on a car, we'll often ask a client, Hey, has this car been in an accident recently? Or do you know anything about an accident history? Because again, wires don't normally fail for no reason. They're pretty durable. They could last a hundred years, but sometimes there's a reason.

Sometimes it's the way something's manufactured, but when there's something that moves, it's in a spot where something is moving. That's where a wire can often be faulty. Or if there's been a collision and you know, there's been repairs done and maybe it hasn't been done properly or, you know, we see that a lot. So it's all about asking the right questions too.

Mark: So after the repair, everything worked fine?

Bernie: Yep. Windows good, door locks fine, everything back to normal. And so really, I mean, it was a time consuming repair and costly in that manner, but you know, no expensive parts were required. These door modules are expensive. They often require reprogramming on Volvos, which I don't know why, but they do.

Mark: And how are these  XC70 Volvos for reliability?

Bernie: Well overall, I'd say pretty good. This car has got over 200,000 kilometres. It's a 2008. So what's that make it, 13 years old now, you know, that's a fair bit of mileage. One thing we did find as there was some oil leaks on the engine, which looked to be probably a major repair. If the owner takes that on. They're not severe leaks, but we have done the rear differential on this vehicle.

You know, they're a bit of a quirky design vehicle. They're a little more expensive than average to fix, but overall, a pretty good car. I think sometimes when you give a car time to age out and you can kind of see whether it's good or not. And I think these are pretty good cars. Just expect things like the rear differential. If it hasn't been done, you'll be doing it.

Mark: They do a lot of differentials, rear differentials for Volvos and Land Rovers. If you need some service for your Volvo in Vancouver, the guys to see are Pawlik Automotive. You can reach them at (604) 327-7112 or check out the website. pawlikautomotive.com. You can book online there now. Or check out the YouTube channel. Pawlik Auto Repair. Hundreds on both of those places. Hundreds, not exaggerating. Over 500 over almost 600 videos, almost 700 I think. Videos all makes in models, types of repairs. We've been doing this for nine years. There's a ton of stuff.  Thank you for watching and listening. We really appreciate it. Thank you, Bernie.