Mark: So 2009 Acura MDX had a front strut problem. What was going on with this vehicle?

Bernie: So this vehicle was brought into our shop. There's some clunking and clicking noises coming from the front suspension. So we did an inspection and found the front struts needed to be replaced.

Mark: So this is a pretty common job amongst anything that's using a MacPherson strut or some other type of strut. Is there anything that makes this model, this job unique?

Bernie: Yes it does. In the case of this car, it does because for the regular suspension system, the struts are available from many of our normal suppliers that we buy from, aftermarket suppliers, but the sport suspension struts are only available from the Acura dealer, and the price is, shockingly high. We'll look at some pictures, but we can keep talking.

Bernie: Yeah, well you could. Okay. So you can actually do that. So here's the car here. And we'll just look at a couple quick pictures. 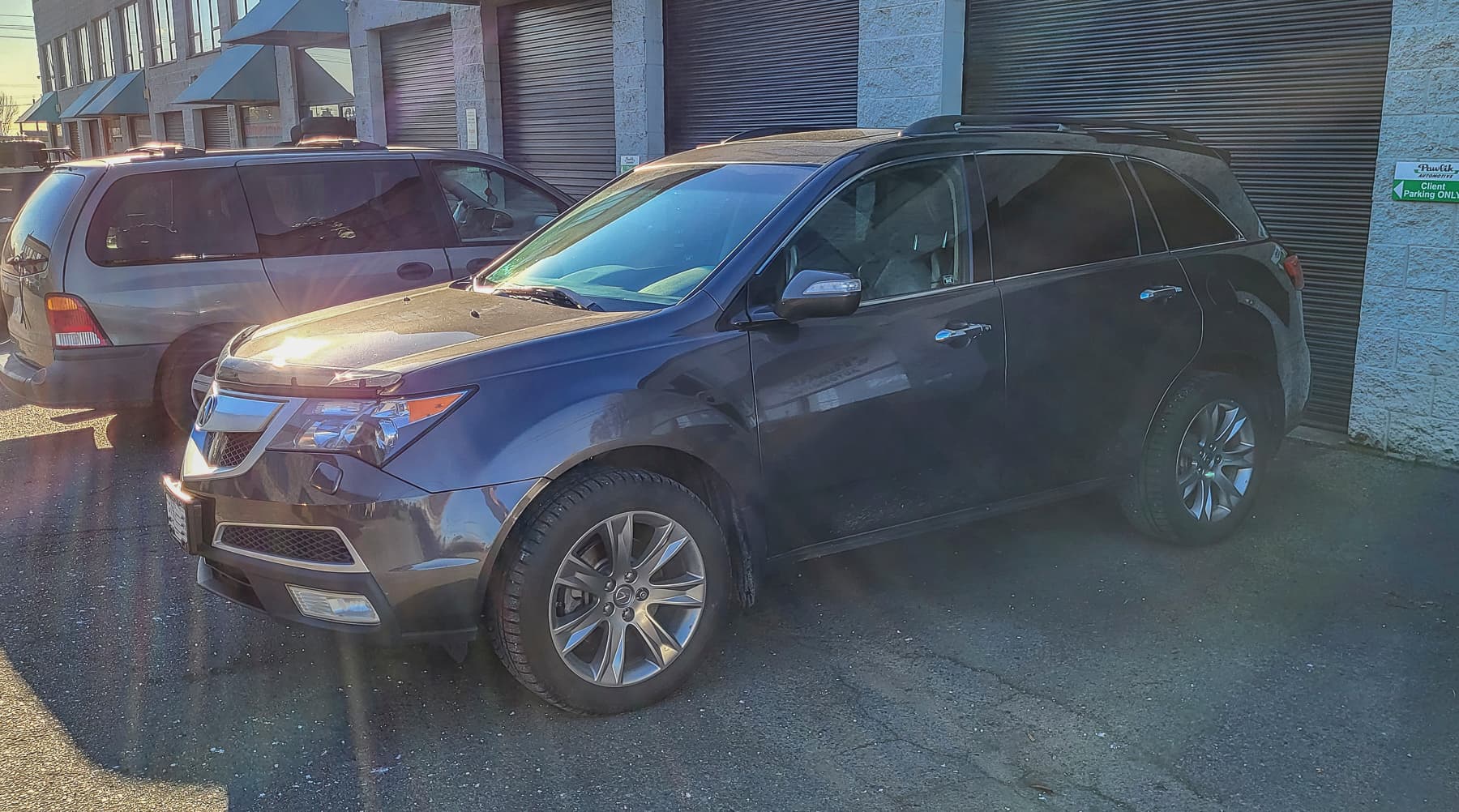 So here's the strut, which looks like a regular strut. I mean, you got your mounting plate in the top coil spring, strut, everything looks pretty much like a normal strut. The only difference, of course, is what's inside of the strut.

And this little electronic connector down here. And this controls basically the sport ride mode of the strut. So yeah, you can replace it. And there are companies that actually sell kits where you can actually replace it with regular struts. I mean, we could have probably put those other, you know, regular struts in as well. 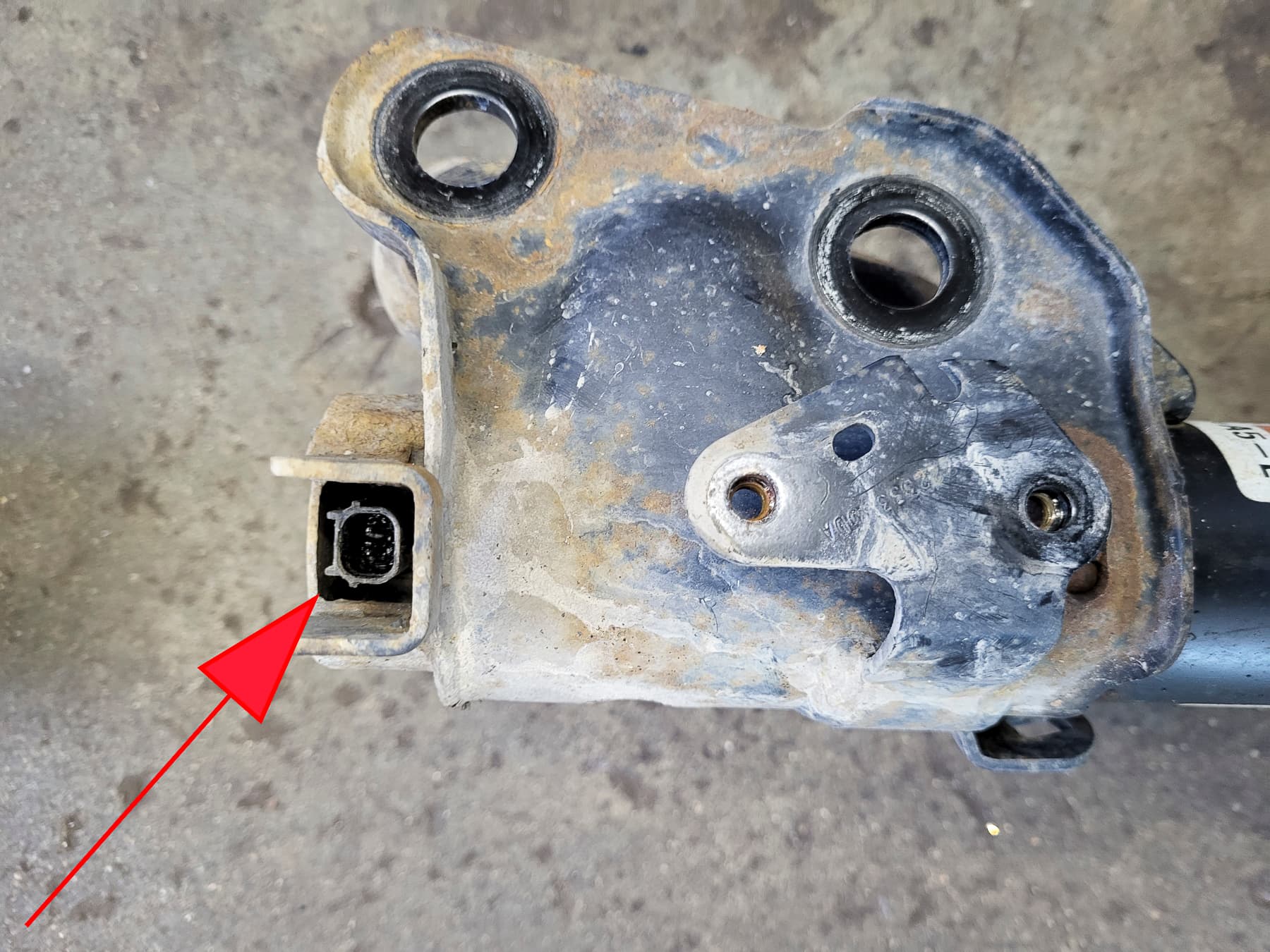 But you lose that functionality of the ride control. Now the kits come with a little electronic module that you hook into the system, because these are electronically controlled. You'll have warning lights and stuff on in the dash. And the way cars are integrated nowadays, you know, if the sport suspension isn't working, it might affect other things.

So they have these little modules and boxes that connect up to the vehicle suspension system, and it basically kind of fools the vehicle into thinking there's still struts there. I did a little further reading on it and from what I researched, I think what they are is, it's just a box with resistors in it.

They give the correct resistance value to the computer saying that the struts are actually there. So, I mean, it's not anything more sophisticated than that. Which you could probably, if you were on a more adventurous, you know, actually just find the right resistance and hook 'em up with a strong, powerful resistor. And it would actually probably do the trick, but the downside is you're not gonna get the ride and the quality of, you know, feel of the car. So it's really up to the individual owner at this point is how much do you wanna spend on fixing it? And if you do the fronts, of course you need to do the backs, if you're gonna change it all over. And in the case of this vehicle, the rear struts were in good.

Mark: So these sport suspension struts, do they fail more often than regular?

Bernie: Well, they may not fail more often, but they fail in different ways. So for instance, this clicking and clunking inside the strut, you know, there's other components inside the strut that you wouldn't find in a regular suspension strut.

And a lot of them, I don't know if this is the case with these, but a lot of vehicles that have like adjustable struts or shocks, they use a fluid that's impregnated with metal particles. And, I think it's a magnet or some electric current to it, and it basically changes the viscosity of the fluid. So it'll flow in a different way.

So I think that's one of the issues. But sometimes there are little valves and plates and things they put in that tend to wear out, that wouldn't wear in normal struts. So sometimes they will wear out a little sooner. I mean, this vehicle's an 09, so that makes it what 13 years old at this point. I mean, if you're in the, the strut sales business, they would've told you to change them five years ago, which is a bunch of bs because a lot of times they'll last 20 years.

You know, I basically just go on, how does the vehicle ride? And if it rides fine, it's not leaking fluid, then I think the struts are fine. That's just my opinion. But in this case, with the clicking and clunking sound, it kind of made it irritating to drive, not a safety issue, but irritating.

Mark: So the suspension strut, we're using that word, like everyone knows what that is. It basically combines the spring, the shock absorber and the connectivity on both ends to, all in one sort of unit.

Bernie: It does. Yeah. I'll just actually show the picture here of the strut again. That's exactly right. And that's why they use 'em. I mean, the alternative is to use individual control arms for suspension. So this is the upper connection of the suspension system. The lower end uses a control arm, which is basically an arm that connects from the frame of the car to the wheel hub.

So it allows for the up and down movement of the vehicle. And so this is the strut here. Like you said, it's got your coil spring, moving my mouse pointer around, coil spring here. So there's your spring, there's this shock absorber right down the middle tube and the strut part, it's all incorporated into one. So it eliminates a need for the control arm.

When MacPherson strut suspension came out, how amazing and fancy it was. I don't know that it's actually better than control arms. It probably isn't. Like individual control arms, you look at really good luxury cars most of 'em have like, you know, multiple control arms, it's more precise. But I mean, for the most part, these work well and an Acura MDX is a luxury car. And there are Mercedes that use MacPherson's struts and you know, lots of luxurious models use them, so they work well.

Mark: So this sport suspension was a very expensive repair, essentially. We sort of glossed over that.

Bernie: Yeah, it was.

Mark: And so is that a typical thing with more luxury vehicles that you're gonna spend more on repairs because you got fancier, do dads.

Bernie: Yeah, absolutely. A lot of luxurious vehicles use air suspension systems. They'll use hydraulic suspensions. Mercedes is famous for that in some of their models. But Lexus uses 'em in some of their cars too. You know, air suspension is more common than you have these electronically controlled suspensions. Dodge Ram trucks have adjustable suspensions and we've done a few repairs and they're really expensive. Instead of air, they actually use a sealed nitrogen gas system. It's kind of cool. You have to charge it up with nitrogen gas. It's kind of neat.

So if you want to keep the repairs cheaper, you know, look for ones that don't have the fancy suspension, but often it's that, that makes the car nice to drive. And especially with like an air suspension adjustable system, if you happen to stick a thousand pounds of weight in the back and five people, you know, you don't wanna overload the vehicle. But the car will ride really nice and, you know, sometimes you can adjust the height up and down if you want, you know, more sporty ride, you keep the car low.

I used to have a Subaru, like an 86 Subaru that had air suspension. Kind of a unusual option, but you know, you push a button, the car would go up two inches or an inch and a half, you know, so go off road. And then if you want, you know, drive on the highway, you drop it down for more, you know, safer sportier ride.

But there's a price to pay. Those air struts were expensive, but a fraction of the price of what these struts cost. And I'm not gonna talk about the price of 'em, but they're an awful lot of money.

Mark: If you need service for your Acura, if you've got clunking and banging and you need that replaced, the guys to see in Vancouver are Pawlik Automotive. You can book online on their website, pawlikautomotive.com. Or you can give them a call, (604) 327-7112. You have to call or book ahead. They're always busy. The lot's always full. They're Vancouver's best for a real reason. They are the best. Thank you for watching and listening. Thanks Bernie.