Mark: So 2009 Ford Escape Hybrid that wasn't starting. What else was going on with his vehicle?

Bernie: Yeah, so the vehicle was towed to our shop. It wouldn't start. It's been cold in Vancouver for awhile. It, it had warmed up, but the owner went out to start the vehicle and it wouldn't crank over. Nothing happened when he turned the key.

Mark: So why wouldn't the engine start?

Bernie: Well, I mean, obviously you think, Hey, the battery has gone weak under the hood. So he did try to jumpstart it and it wouldn't start. So on this type of hybrid, which is the same as a Toyota Prius, by the way, the high voltage battery is required to actually start the engine. So that has to be in the right amount of state of charge to start the engine. If it's too low in voltage or the battery has gone dead, then your internal combustion engine won't start.

Mark: So is that how you know that the high-voltage battery was the cause of the problem.

Bernie: We did, but I mean the first step of course is to make sure that 12 volt battery is in at least decent shape. So our diagnostic procedures starts with testing the 12 volt battery, making sure it's got an adequate state of charge. Then we scan the vehicle computer to see what kind of trouble codes are there. And there was, I can't remember the exact code, I don't have it in front of me, but it was basically related to the high voltage battery being too low. So at that point we knew we had to address the high voltage battery and then deal with the issues there.

Mark: So can the high voltage battery be recharged or is it just it's cooked? It needs to be replaced.

Bernie: Yeah, no it can be recharged, but it's a very specialty process. Chargers are kind of unique. We actually purchased one from a company in Wister, Massachusetts, where I did some EV training and they're not really readily available. It's it's a very unique device and the procedure is kind of time-consuming, which we can talk about in a minute.

Mark: So you're not going down to Lordco to get a charger for this high voltage battery.

Bernie: You are not. You're not going to any sort of regular auto repair. And if you're watching this from somewhere else, Lordco is a large auto repair parts company in British Columbia, expanding into Alberta.

But yeah, you're not going to any sort of auto repair shop to buy these kinds of chargers. This is a very highly specialized service and repair. And in fact it involves us removing the battery pack. We'll look at some photos in a few minutes. We actually have to take the high voltage battery out of the vehicle, partially dismantle it to access the terminals to actually do the charging.

Bernie: Well, it's funny that you mentioned that. So I will say, this vehicle is very similar to a Toyota Prius and Toyota doesn't have any way to charge the battery simply either. You have to do, you know what we're doing if your Prius battery goes dead. But Ford, up until, in the Escape, up until 2008, actually had a switch in the back of the vehicle if your high voltage battery went too low. You could click a switch and charge the high voltage battery through the 12 volt charging system.

But for some reason, 2009 and newer, they decided, you know, we don't really need that thing, so they didn't put it in. So the customer is now faced with a very large bill and a lot of inconvenience to have to fix this. I assume they must have figured, Hey, we can save a hundred dollars or a couple of hundred dollars per car. Why bother putting it in? So thank you Ford. But you know, keeps us in business. 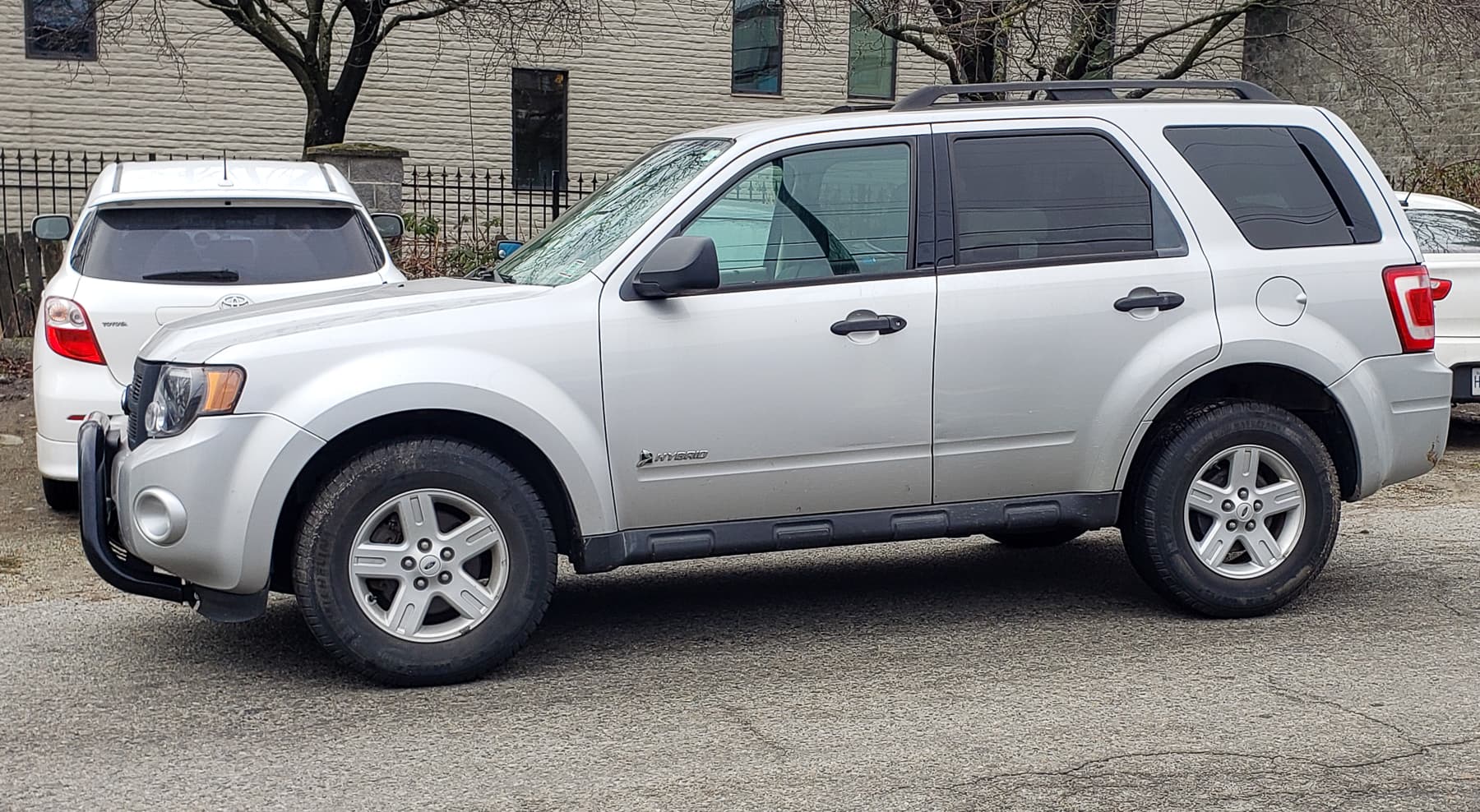 And a kind of unique feature of this vehicle. You can tell it's a hybrid model from a regular one by this little vent here. If the rear glass here actually has a little opening and that's an air vent to actually cool the battery. Which is very important in keeping the battery alive for a long time. 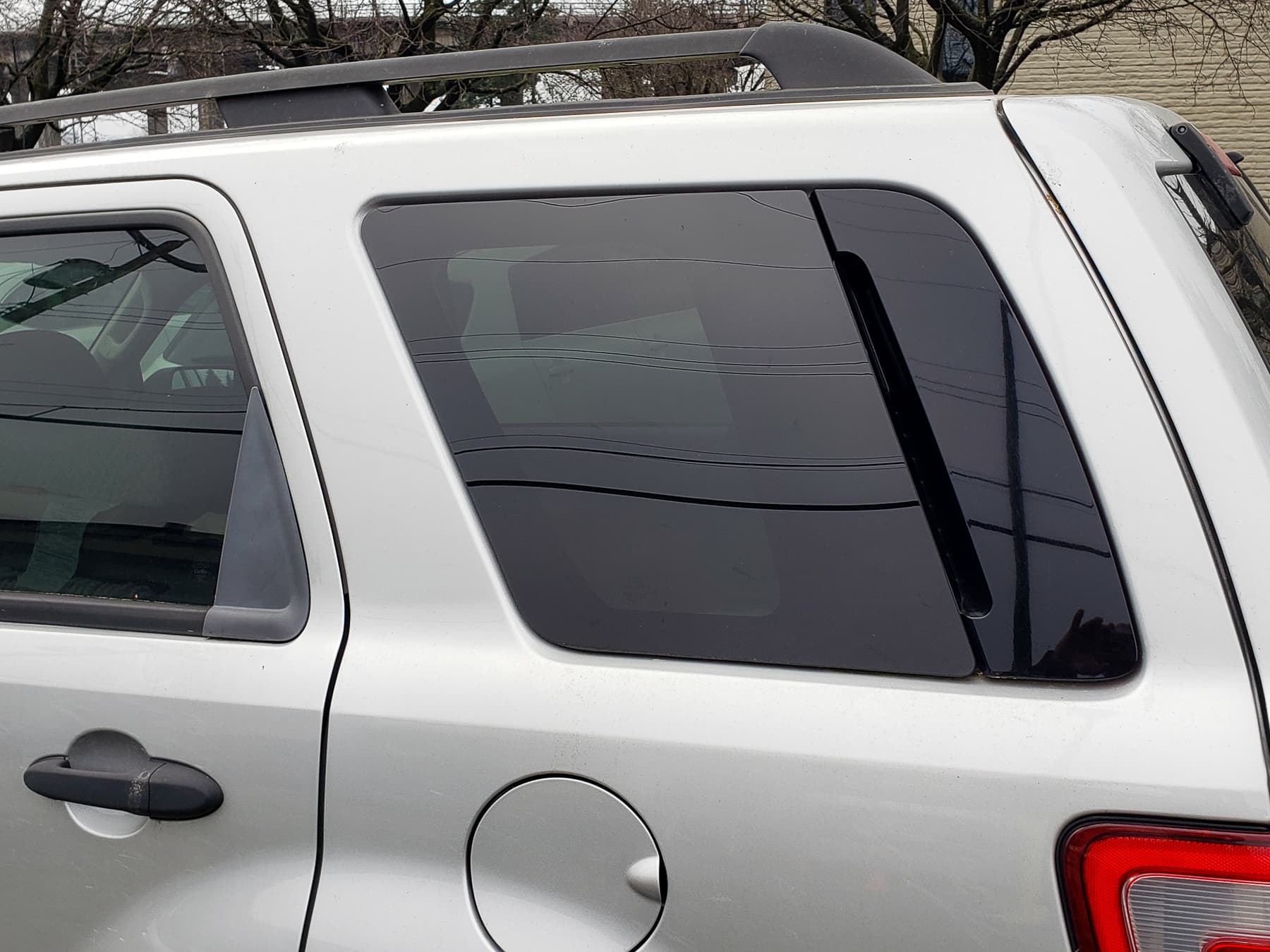 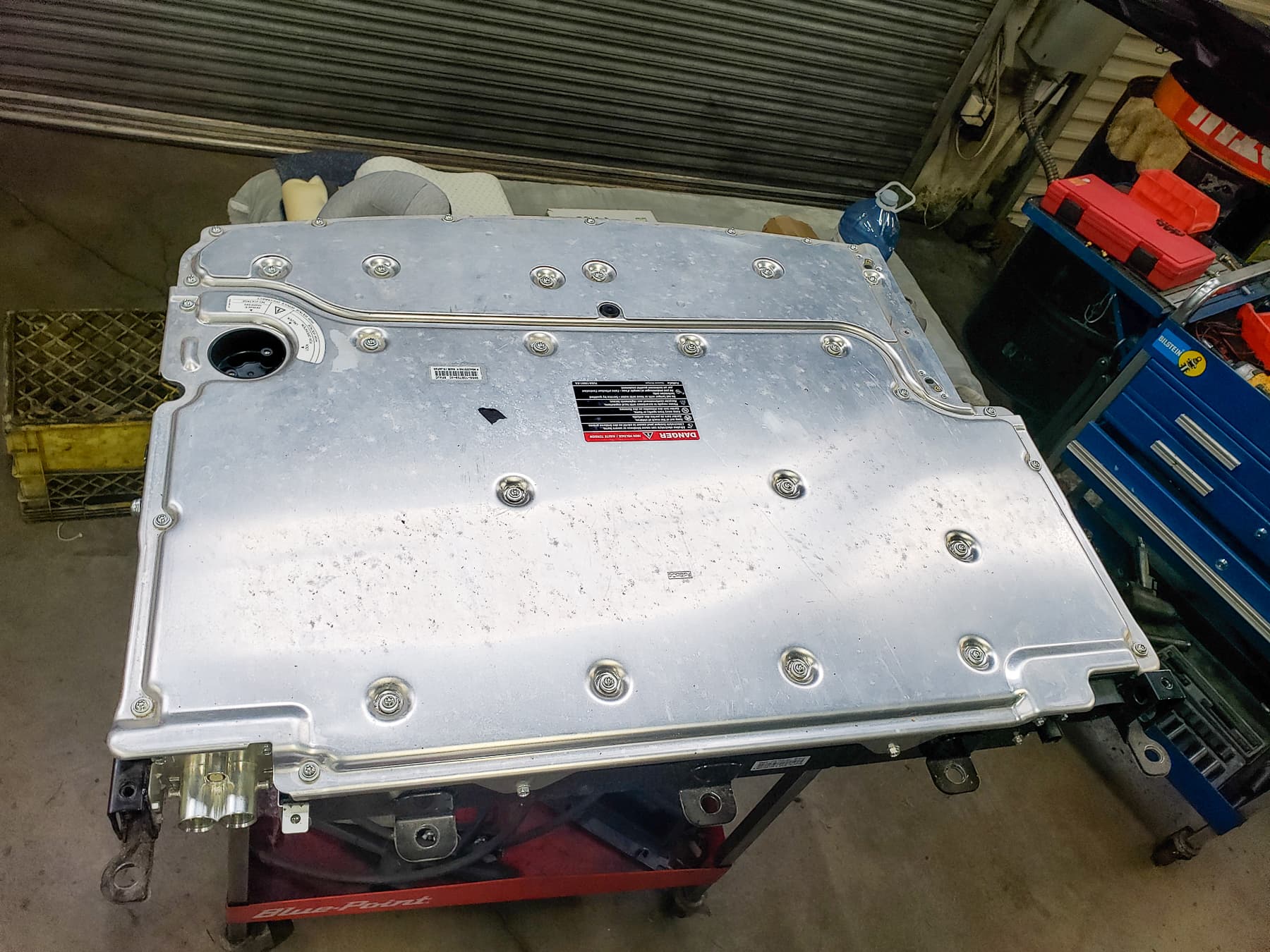 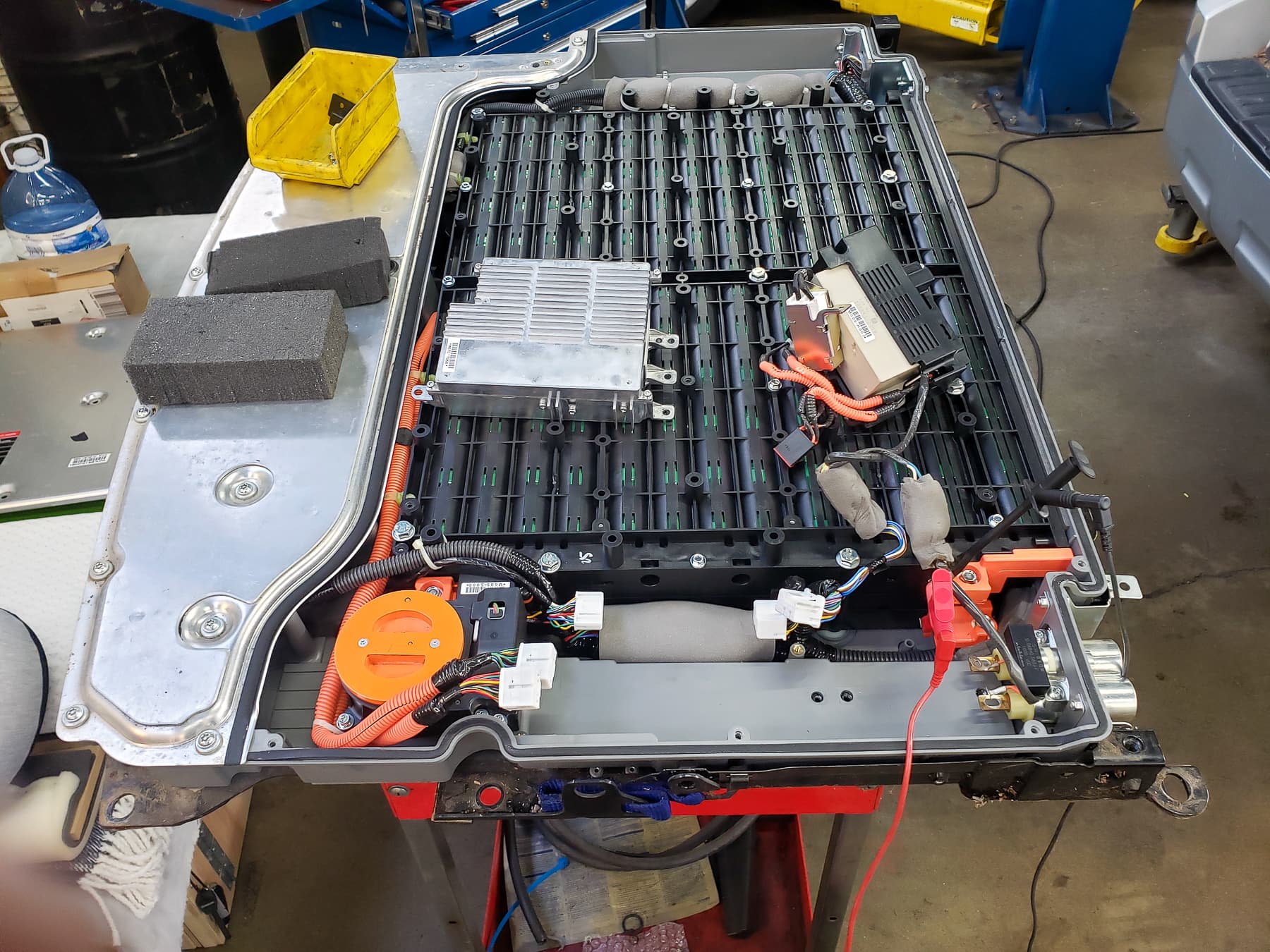 We have to access all these components to basically connect the charger. And here's a view of our special chargers I mentioned. So this is actually in the process of charging. So it's at 329 volts at this point 400 million amps of current is going. So it's a very slow charging process, takes hours and hours. We actually did over a period of a couple of days to get the power back into the battery. There are probably chargers available that'll do it way faster, but this is just kind of what we have available. And it's kind of unique. 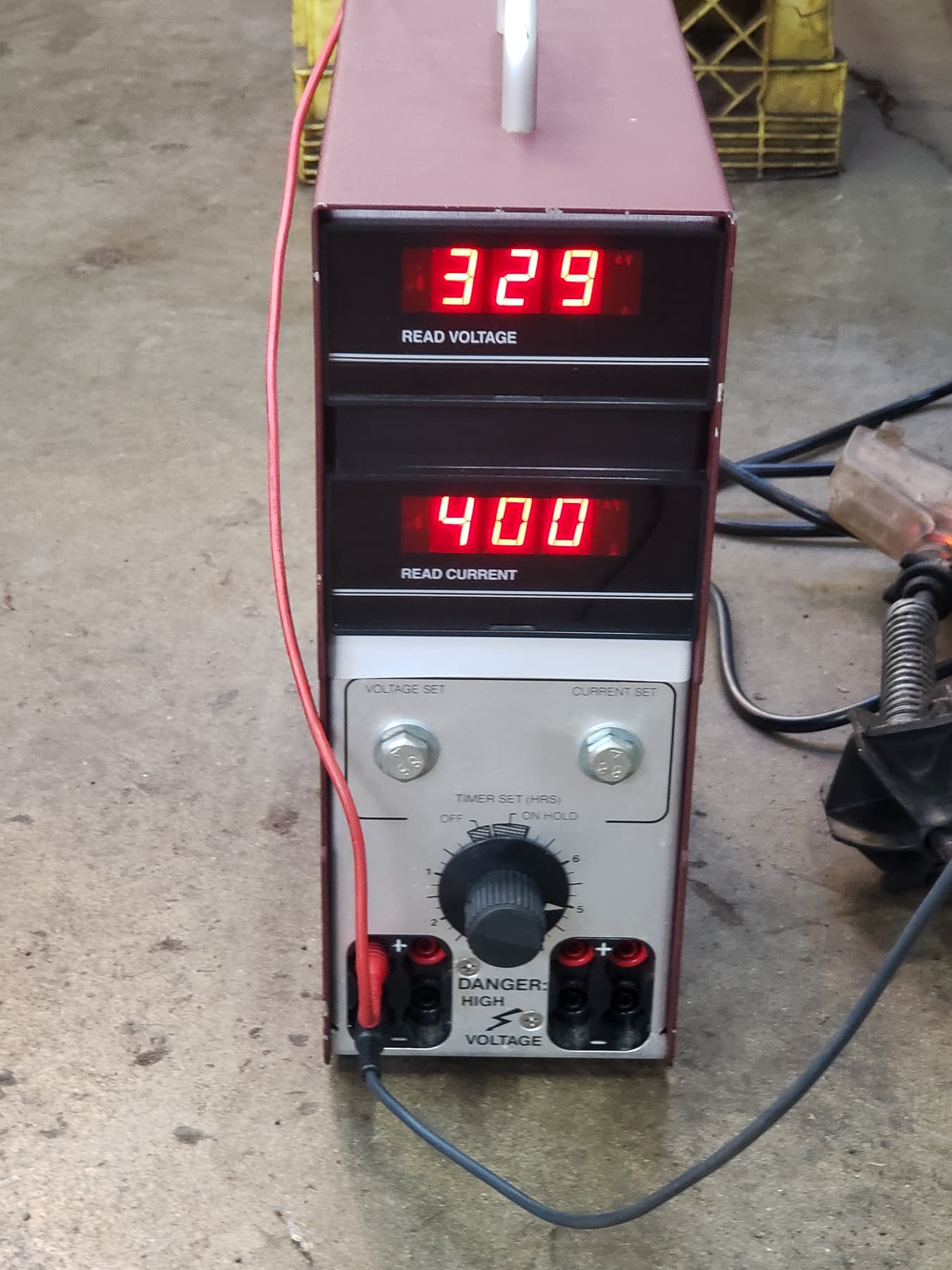 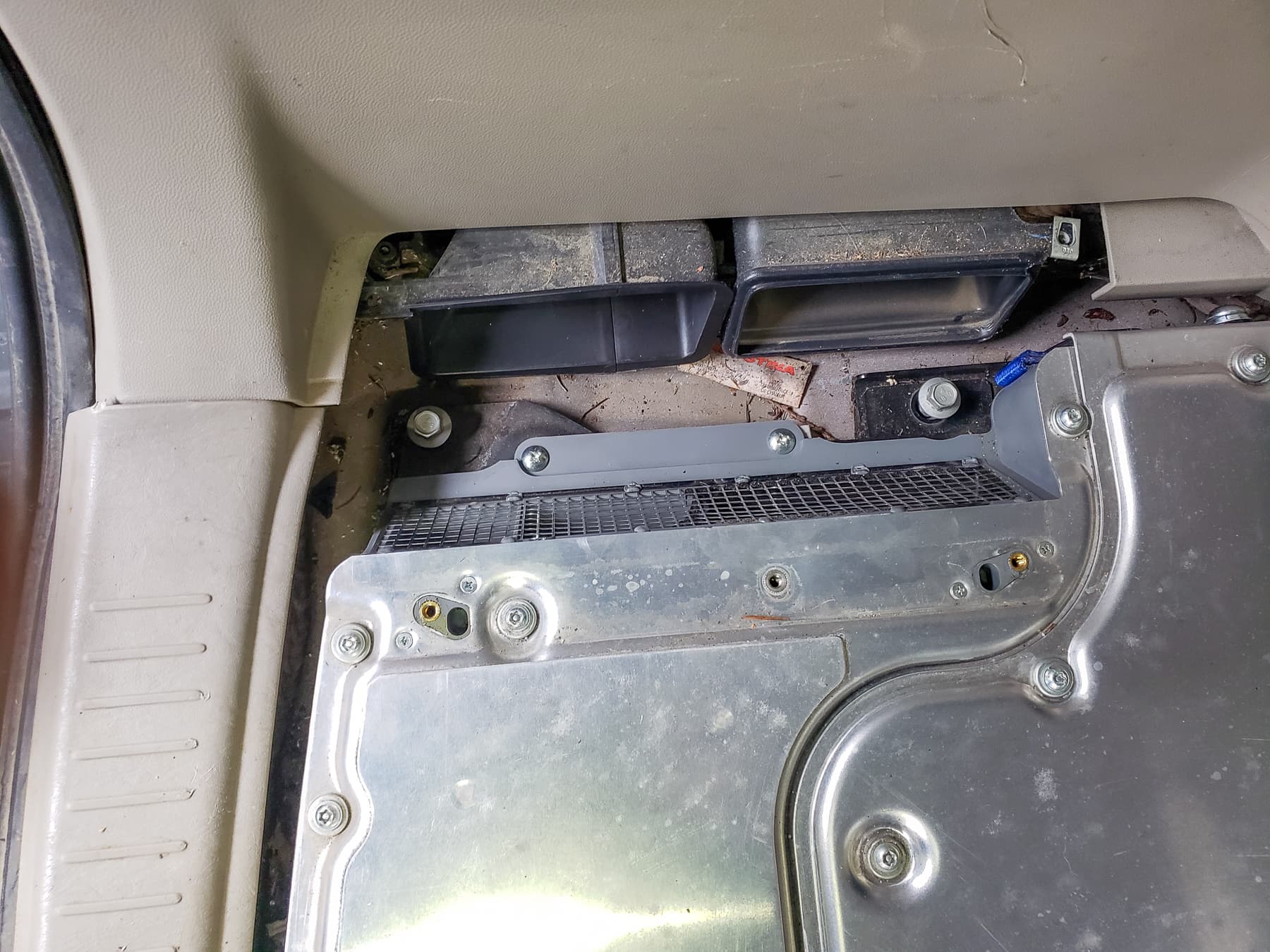 This is the battery back in the vehicle. This is that air vent I was showing you. This is where the air kind of gets hooked in. And there's a fan that blows air through the battery pack to keep the temperature at the right spot. 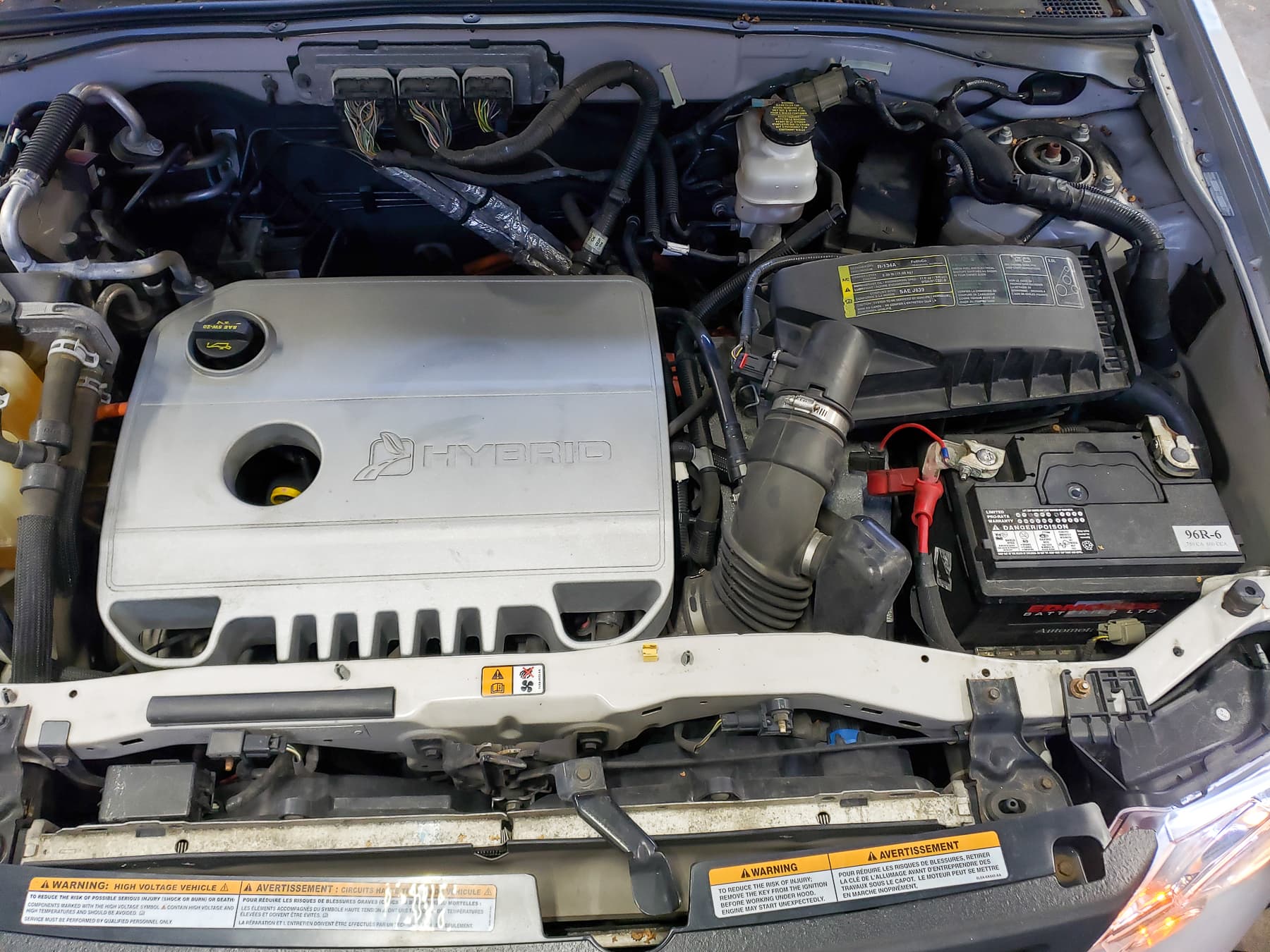 The under hood view. There's the 12 volt battery. The internal combustion engine. Then the motor generator unit's over here, basically the transmission, which drives the vehicle. And one last picture to look at is after our repairs and road test. This is what we do after the repair. Road test the vehicle. Look at the scan tool. See what kind of information we've got. 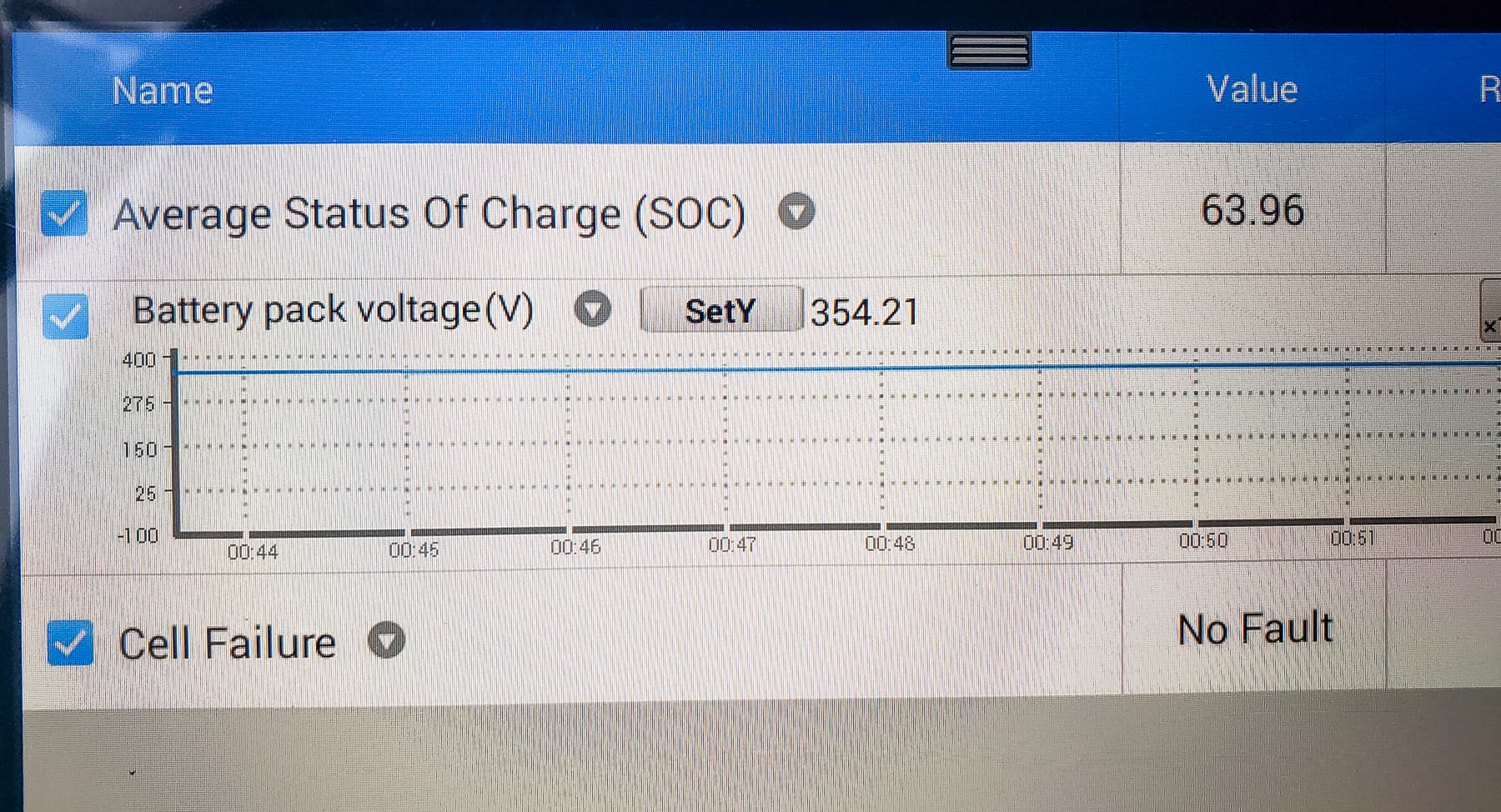 So at the time of me taking this photo, there was 354 volts in the high voltage battery pack. And the good thing for the customer is the battery was in good shape because it says no fault cell failure, because if the cells are bad, this will show up as a fault. And then the battery will need to be replaced.

I mean, there are other things that could need it, but that's a surefire indicator that at least the battery decent. And average state of charge, this fluctuates too, depending on if you're going down hills for a long time, this state of charge will go way up. If you're you know, going up a hill and really booting it, the state of charge will go down. So at this point, this is what we're reading and there's our picture show.

Mark: All right. So why do you think the battery lost charge in the first place?

Bernie: Well, I asked the owner, I said, how long has the car sitting? You know, last time we've had a couple of these where people have left them for months and then when gone to start them and they wouldn't go. This one, he said it was probably off for 10 days, maybe a little longer.

We figured it was very cold in Vancouver, like down to about -10, -12 Celsius, which is pretty cold here. It sat for a while. It might just be the combination that when he parked the vehicle, the state of charge was a little low and just the temperature caused the battery to run down.

So that's all we can figure. It seems a little on a short timeframe because you know, people have Prius's have left them for six months and they fire up. But you know, I think it's a combination of when it sat and the temperature, it just kind of, for some reason, the battery pack was discharged.

Mark: And the high voltage battery in the vehicle is charged by the motor generator.

Bernie: It is. Then they kind of work together. So if the high-voltage battery's dead, the internal combustion engine won't start, to charge the battery. So it's kind of a vicious cycle, but nonetheless, if you can get it started, then the internal combustion engine motor will drive the motor generator to charge the battery pack.

Mark: How did everything work after you charged and installed the battery?

Bernie: Yeah, it was good. It actually worked fine. Started up right away. We retested the 12 volt battery that tested fine, and we went for a couple of good road tests. And I usually like to verify that everything works well and it's getting the motor generators charging the battery, the battery is driving the motor generator. It's all working. So that was a picture I showed with the scan tool. And as I said, it fluctuates. But yeah, happy ending after all. We never know when we go to take this charging process, whether the battery is actually going to survive it or not.

So we can tell, of course, once we hook the charger up and how the voltage comes through with whether the battery is going to be good or not, but at least at this point it's out and then the customer can opt for a new battery. By the way, a new battery for this is, I don't even know if he can buy one from Ford anymore, but I think I priced it, it was like $24,000 or something insane like that.

It's something crazy. It might be less, but I think last time we looked at one it was something like that. So there's lots of good used batteries out there. That's what I would recommend because they're generally pretty reliable.

Mark: So how are these Ford Escape Hybrids for reliability?

Bernie: I mean, generally they're pretty good. We've run into a few of these where the batteries have discharged, but overall it's a pretty decent vehicle. This one's now what 13 years old. I think it's got some pretty good life left in it.

Mark: If you're looking for some service for your hybrid in Vancouver, the guys who are experts are Pawlik Automotive. They have all the tools. They have all the equipment. They know what they're doing to fix your vehicle. They're trained up and know how to fix your vehicle the right way, the first time. Pawlik Automotive. You can book on the website, pawlikautomotive.com. Or you can check out hundreds of videos, all makes and models and types of repairs are on there. There's our YouTube channel Pawlik Auto Repair. Same story. We've been doing this for 10 years. Or you can call and book your appointment. (604) 327-7112. They'll talk to you. They'll get ready for when your service appointment is. They'll be ready. They'll look after you. They'll get it done right the first time. Pawlik Auto Repair. Thanks Bernie.