Mark: So today's victim is a diesel 2009 Ford F350, a biggie 6.4 litre diesel had a cab mount replacement. What was going on with this diesel beastie?

Bernie: Yeah. So there was a couple of things going on with the vehicle. One was a drivability problem that the engine had some performance issues, did some diagnostics and determined that the high pressure fuel pump had an issue. So that was what needed to be replaced.

Mark: So where is the high pressure fuel pump?

Mark: So did Ford design these trucks for easier cab removal, since it seems that so many, these are complex engines, this is a common way and easy, fastest way to get at everything. So did they make it easier?

Bernie: Well, what I can say is that on the 6.7 litre, which is I think a year after this 2010, it was introduced. They definitely designed the cabs to be easier to remove on those vehicles. And I'm not sure on this particular model, but I mean the six litre, we do lots of them and we have the cab removal procedure down pretty well. But the newer ones, they definitely designed with that idea in mind because they realized, you know, anything needs to be done, the cabs got to come off. So it's not really a huge job for us to take these off even though it's sounds incredibly intimidating. There's a few items to remove and they have made it easier. I just can't say this model year, whether it's easier than say an 07.

Mark: How did the cab removal process go?

Bernie: Well, removing it was a bit problematic on this vehicle. Several of the bolts, actually, most of the bolts were seized and we had to cut the heads of all the bolts off so we can pop the cab off and then sort of deal with whatever was going on with the seized bolts after. What they do with the bolts is they, we'll look at a picture in a minute, that the bolts are actually Loctited in place, so they don't come loose. And so the lock tightening had basically kind of seized up and they use a, it's like a captive nut on the frame. So it was not really welded in place it kind of floats freely. And so there was a tendency for it to spin, which obviously would have been a disaster. You know, so we cut them off and figured let's deal with it later. So that's kind of how it went.

Mark: So when we're talking about removing the cab from a truck, basically there's a frame underneath the truck, the cabs and bed on top, and you're taking the whole top of the truck off.

Bernie: Yeah. You basically remove the top where the where the hood and engine compartment fenders the passenger compartment is a four-door truck, which, I mean, almost all trucks I realize nowadays are. And you basically just lift that all off the truck. A lot of on frame vehicles, they're really not as difficult to remove as you think. It just seems like kind of a freaky concept. Actually let's just look at it, the pictures right now and we can keep talking. 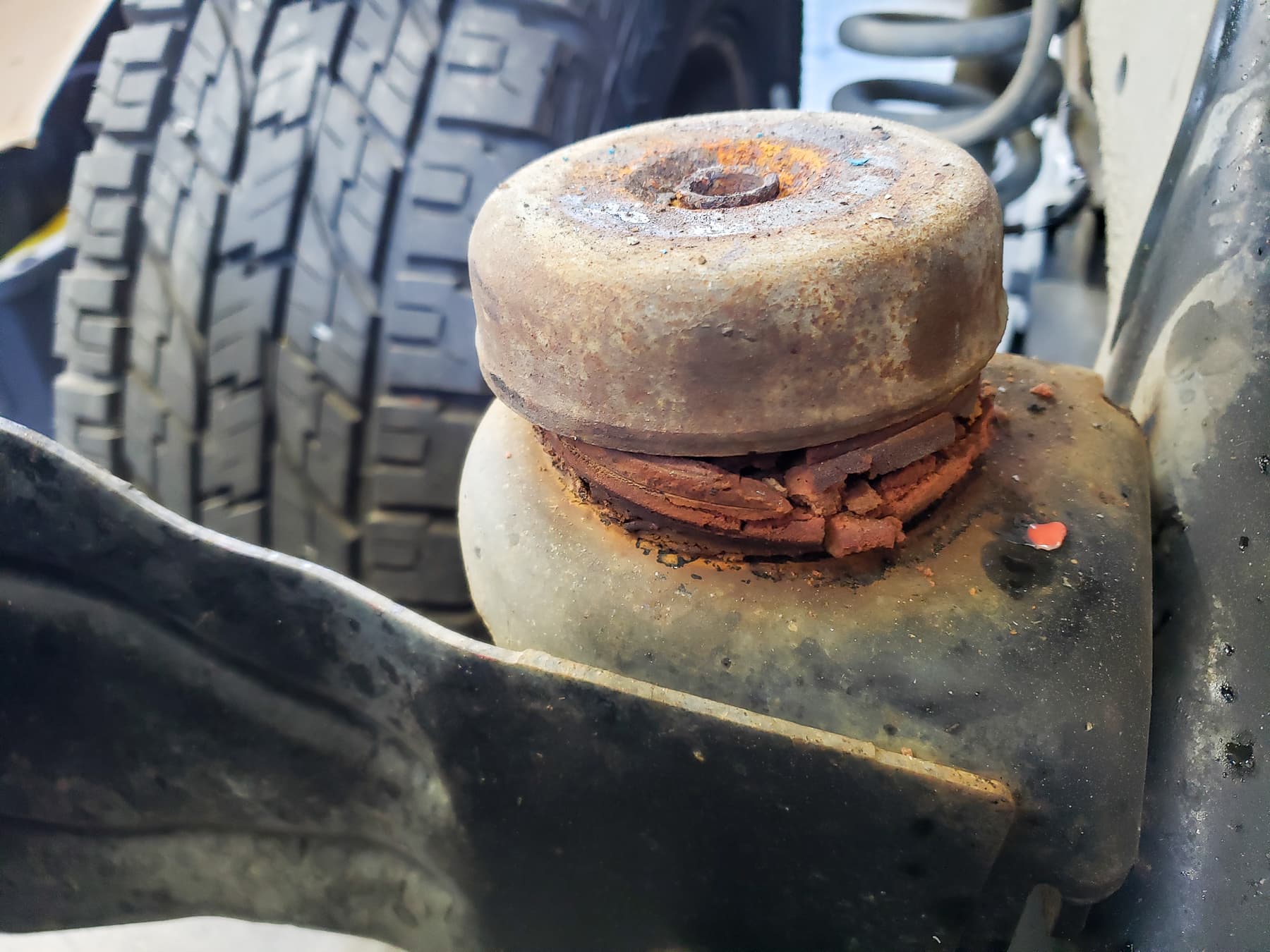 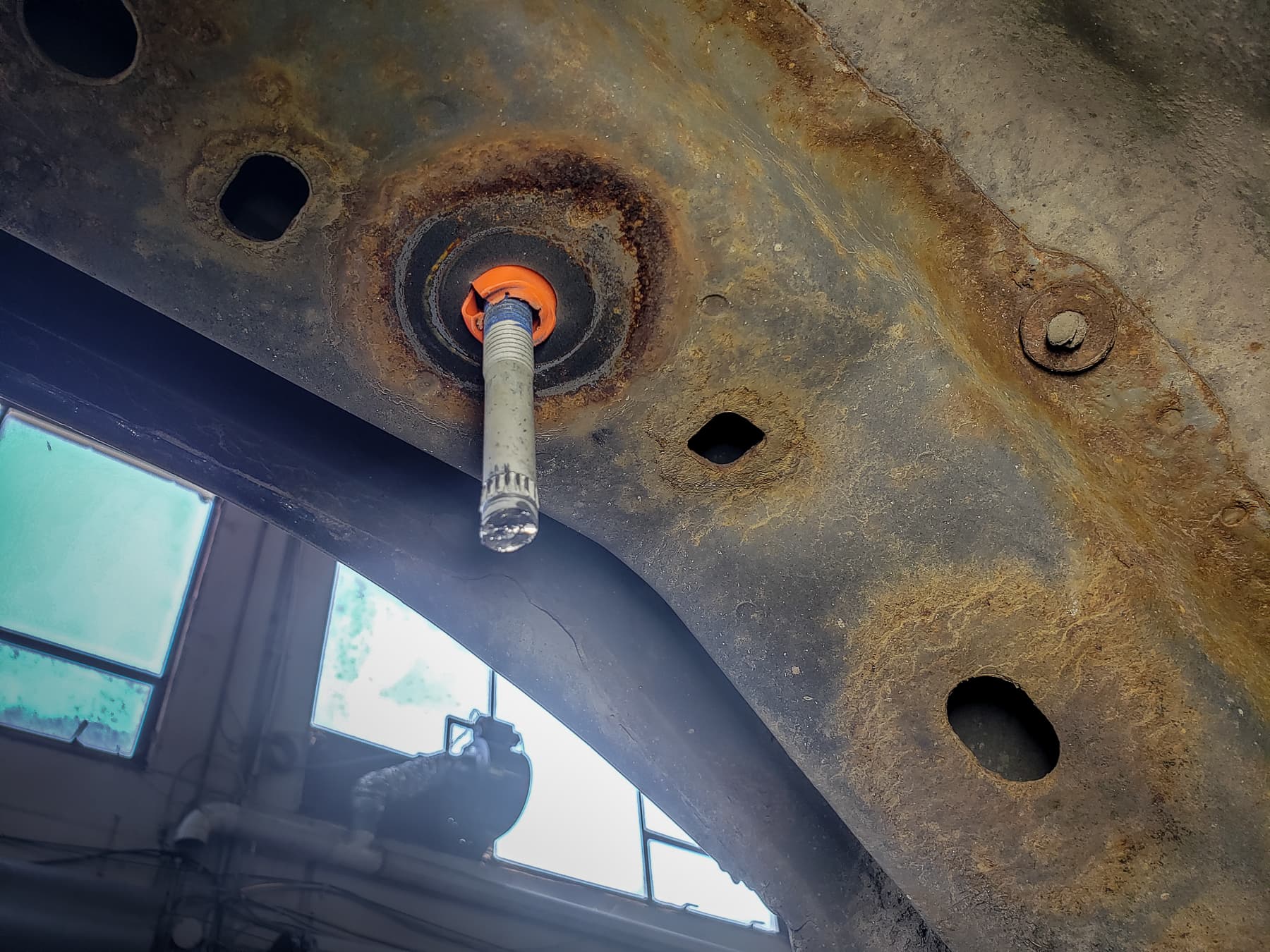 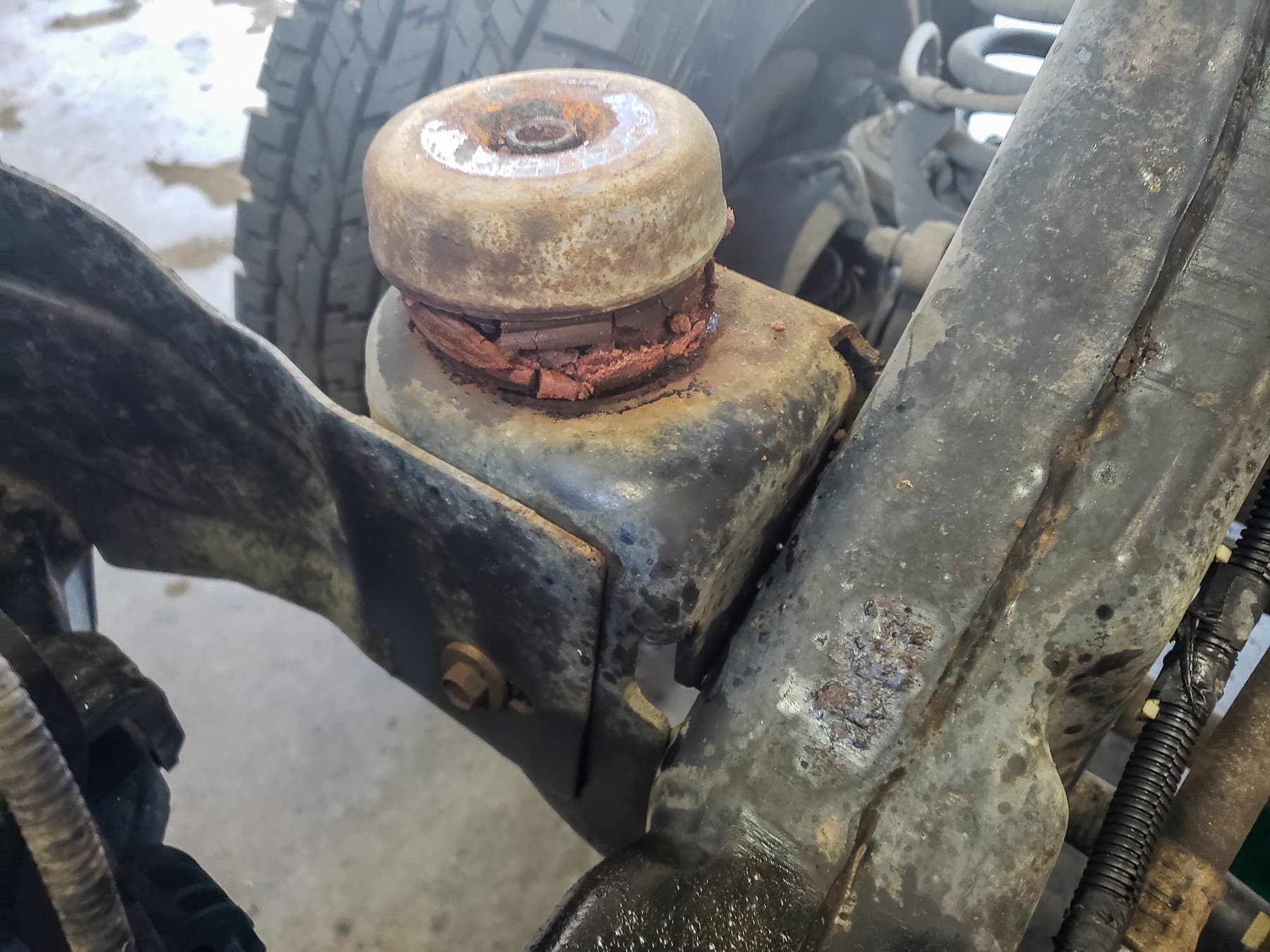 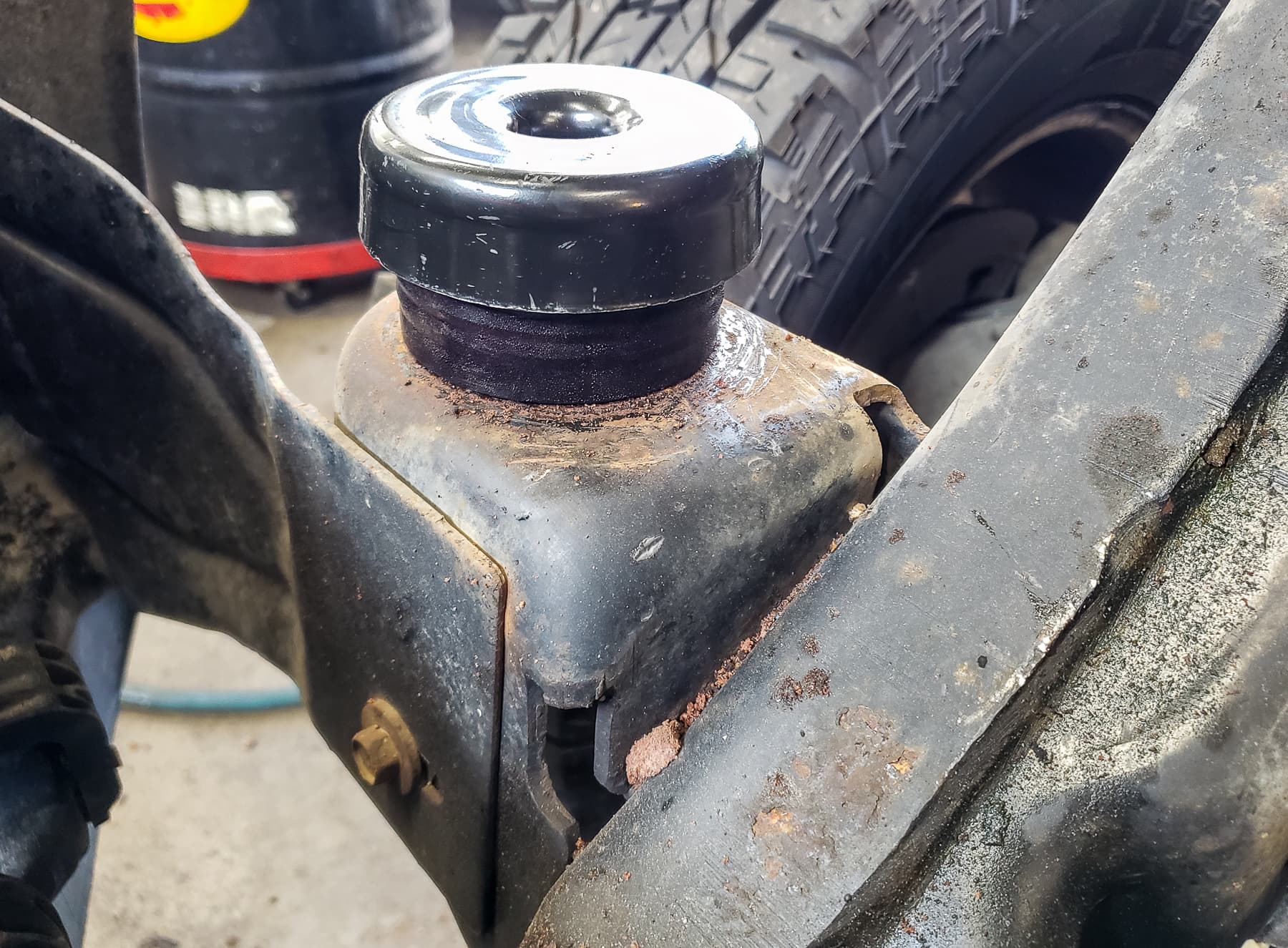 So the other issue we did find is the cab mounts were really badly worn. That's why we're doing this podcast. I mean, we lift a lot of these cabs off and we don't normally find cab mounts worn, but you can see this rubber here is completely disintegrated.

This is the bolt was left over that we cut off. So you can see the Loctite on the top of the bolt and what we ended up doing this sort of heating the bolt in such a way so it kind of freed the Loctite and then we're able to remove the bolts. It took a lot of extra time to do this, but we were able to successfully remove it. Now you can see the frame is welded in solid, so there's no way to change the captive nut short of cutting the frame open. So it was kind of like one of those things where we had to make sure we did it properly.

Mark: It's a threaded bolt that goes into the nut that's on the other side of the frame that we can't see.

Let's look at a couple of other pictures. So this is another view of a different mount that's all crushed out. I mean, they all kind of look the same, but it's kind of surprising.

Mark: And the body sits right on top of those.

Bernie: Body sits right on top of these. Yeah. Yeah. So this is a cushion mount. So because if it wasn't cushion, you'd feel every bump, every bump and rattle, it would be felt throughout the inside of the vehicle. It would be exceptionally rough, even though, you know, it is a one ton truck it's obviously going to be rough to begin with. There's a picture of our new mount, so you can kind of get an idea. What does it, what does it look like when it's new? Well, that's what it looks like when it's new, you can see a nice, perfectly symmetrical piece of rubber. That's not all mushed out and destroyed. One last comparison. Old. New.

Mark: Was there any other issues that you ran into when you were changing the damaged, after the damaged bolts were replaced?

Bernie: No, the mounts themselves are pretty easy. They just kind of stick on top of the frame. And then they get squashed in as you drop the cab down and then bolt it up. So once we got the bolts removed from the cab, everything else was pretty straight forward.

Mark: Were there any other issues once you had the cab off and were working on the fuel pump?

Bernie: No, the fuel pump went successfully. Well, that replacement was successful. We did that. One other issue we did run into afterwards though was that the vehicle still had some running issues. We change fuel filters. There's two fuel filters, one under the hood and one under the vehicle, which was kind of easy to get with the cab off. It's usually kind of a pain to access.

There's a lot of guck in that filter. Anyways to make a long story short, it turned out that the actual low pressure fuel pump had gone bad also, which is located in that same areas that lower fuel filter. It's called the horizontal fuel conditioning module. I always love saying that. The HFCM. I don't know where these engineers come up with these weird words, but the horizontal fuel conditioning module, it's basically a fuel pump, a water separator, and a fuel filter. It's a fuel conditioner. It's really weird. Anyways.

Mark: So its job is basically taking fuel from the tank, the fuel tank, transferring it through the vehicle, up to the high pressure fuel pump.

Bernie: Exactly. That's exactly what its job is. Yeah. And then in addition to that, so we replaced that and everything is running fine. And then out in the road, it kind of bogged down again on us. We figured maybe we have a fuel, because of this guck that's in the fuel system. Maybe there's a an issue in the tank. Maybe there's some contaminants. Because it certainly looked like it. So we pulled the tank out, cleaned it out, found the fuel strainer was partially plugged to. So clean the tank out, replace the strainer, put all back together, ran like a dream.

So I guess we're drifting a little off of the cab mount situation here, but you know, we think the high pressure fuel pump probably was damaged by the lack of proper fuel pressure from the low pressure pump and the guck.

So it's always important in a diesel. Get good quality fuel. Make sure you change your filters. And this customer is actually a pretty good maintenance client. So it may be that he picked up some bad fuel somewhere along the way. That does happen from time to time.

Mark: Somebody doesn't grind the bones quite enough in that dinosaur juice.

Bernie: That's right. Yeah, exactly. That the distillation process didn't quite work so well. So anyways you know, we don't see fuel problems like I've talked about like a lot of gasoline engines don't even have a fuel filter anymore like they used to. And you know, it tells me that at least the process of fuel manufacturing and distribution is very clean compared to what it used to be 30 years ago. But you know, diesel, it's subject to crap forming inside it too. So you gotta be careful.

Mark: How are the 6.4 litre diesels compared to other Ford diesel engines?

Bernie: Yeah, I think they're pretty good. I mean, they are definitely less problems in a six litre. I mean, vehicle is about 220,000 kilometres, I think when we did the service. We've serviced this vehicle for many years for this client. This is the first major problem he's had with anything. So that's pretty good. If you consider a six litre up to 220 Ks, you may have spent, you know, 10 or $20,000 on repairs. Maybe. And some people with six litres have spent nothing even up to that deal, but those are the rare exceptions. And I think the 6.7 is a better engine than a 6.4. It's pretty decent.

Mark: If you need some service for your diesel, any make or model of diesel in Vancouver, the guys to see, the experts are Pawlik Automotive. You can book online pawlikautomotive.com. We have hundreds of videos on there. Check them out. They're good. We've been doing this for. 10 years. 10 years we've been doing this. Almost a thousand videos, all makes and models and types of repairs. Or you can call (604) 327-7112. Almost always they answer the phone. Sometimes they get too busy, but most of the time you'll actually have somebody to talk to. No voicemail jail. Yay. Call them and get booked. They will ask you some questions. They'll make sure they're ready for when you show up for your appointment. You can check out our YouTube channel. Pawlik Auto Repair. All the videos are on there as well. We thank you for watching and thank you, Bernie.

Bernie: And thank you, Mark. Thanks for watching and listening. We appreciate it.