Today’s featured service is Fuel Pump Replacement on a 2009 Jaguar XF, brought to us by a client from West End, Vancouver.

This beautiful 2009 Jaguar XF suffered from a stumbling engine and no acceleration when the fuel tank level was low and the car was cornered hard. Connecting diagnostic equipment confirmed that fuel pump pressure momentarily dropped to zero on sharp right turns. What we had was a fuel starvation issue.

The Jaguar XF uses a saddle tank: a design common to many cars. The tank spreads out across the vehicle under the rear seat, but must be made in such a way as to accommodate the driveshaft and exhaust system. To do so it becomes thin in the center and is deeper on both sides. This requires a system with either 2 fuel pumps or a main pump and a pick-up pump. Our Jaguar XF uses a rather unique version of the latter. The main fuel pump sits in the right tank in a bowl which is filled with fuel by a jet section pump located below the bowl and in the left tank.

In order to cure our Jaguar’s ailments we replaced the main fuel pump and the auxiliary assembly to the left tank. A road test involving some hard right turns, with our diagnostic equipment connected verified good fuel pressure at all times.

While fuel pump replacement often involves dropping the fuel tank, the Jaguar XF, like most saddle-tanked vehicles provides fuel pump access from inside the car. This is a great thing because removing saddle tanks is very labour intensive. 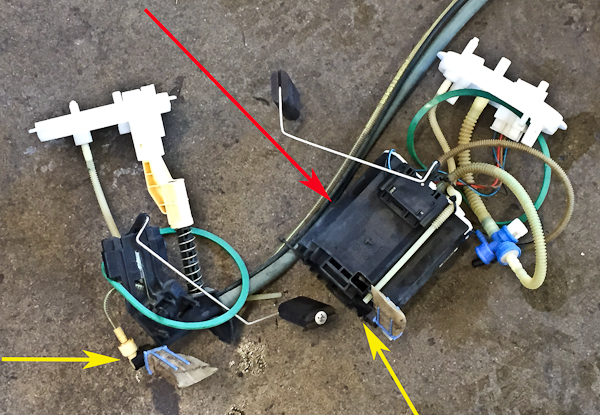 Fuel pump assemblies for 2009 Jaguar XF. Unit on left is the left tank assembly with fuel gauge sender and jet pump. The yellow arrows point to the jet pumps. The unit on the right is the right tank unit which contains the main pump inside the bowl assembly and indicated by red arrow. This unit also has a jet pump and fuel gauge sender
If you google fuel pump or fuel starvation concerns for this car you will find many results and there are recalls for some of these cars. This particular model was not one of those covered.

This 2009 Jaguar XF is a gorgeous car that looks great and performs well. The interior is luxurious, but perhaps the most interesting feature is the dash board air vents which ‘roll out’ when the key in turned on. While Jaguar cars have a poor reputation for reliability we find that those built since around the 2000 model year are good cars. The influence that Ford had on Jaguar was indeed positive.

For more information on the Jaguar XF click here http://en.wikipedia.org/wiki/Jaguar_XF 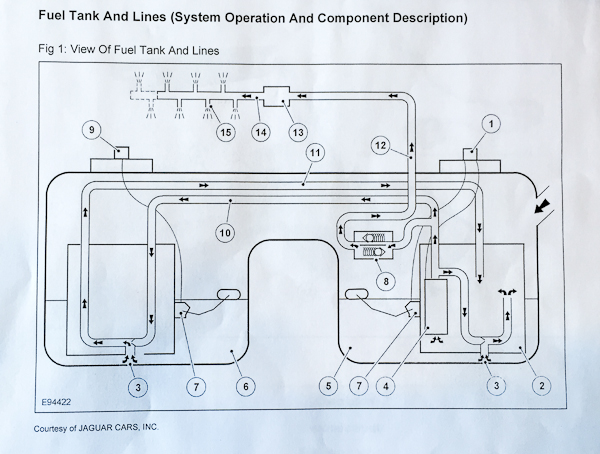