Mark: Land Rovers an LR2, 2009 with a crankcase vent valve replacement. What was going on with this vehicle?

Bernie: So the vehicle came to our shop with a client's concern was there was a noise, like a noise coming from the engine area where after the vehicle was driven for a while it's good and hot. So, had a look at a few things. We did actually do a repair, we replaced the serpentine belt tensioner because there was some noise from that issue. We ran it for a long time, never heard the noise. And then finally after some time that the noise reoccurred and we were able to find that the noise was coming from the PCV valve or crankcase vent valve.

Mark: So what's involved in replacing this part?

Bernie: Well, so this part, basically it's an assembly that bolts onto the back of the intake manifold. Not an incredibly difficult repair. Fortunately it's pretty accessible. Once the engine cover's removed, basically a bolt on bolt off repair. A little bit of computer reprogramming afterwards to, which I'll explain a little later on, but that's basically what was involved.

Mark: So what was wrong with this part?

Bernie: Well, basically let's have a look at some pictures and I can show what goes on with this part. 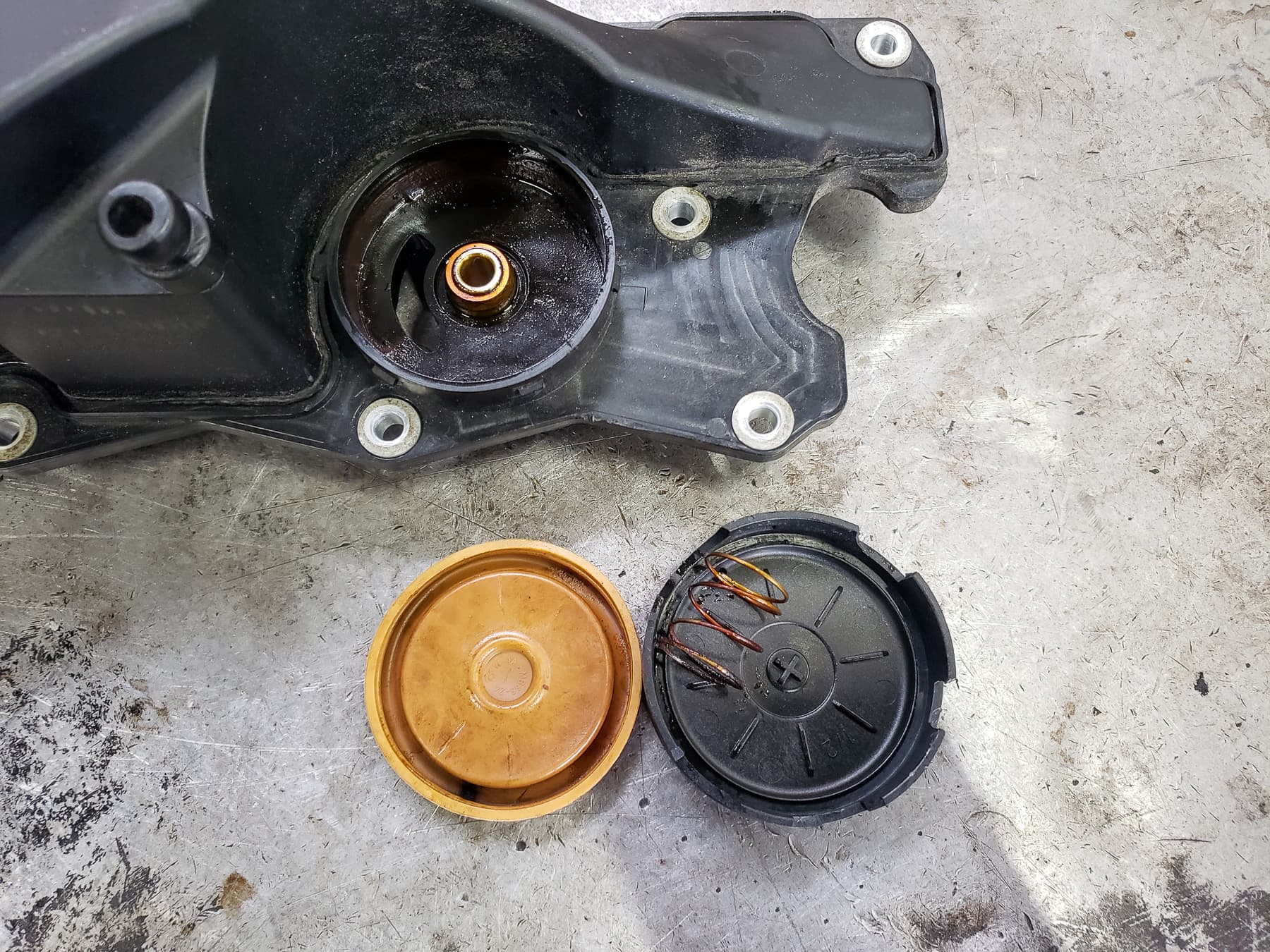 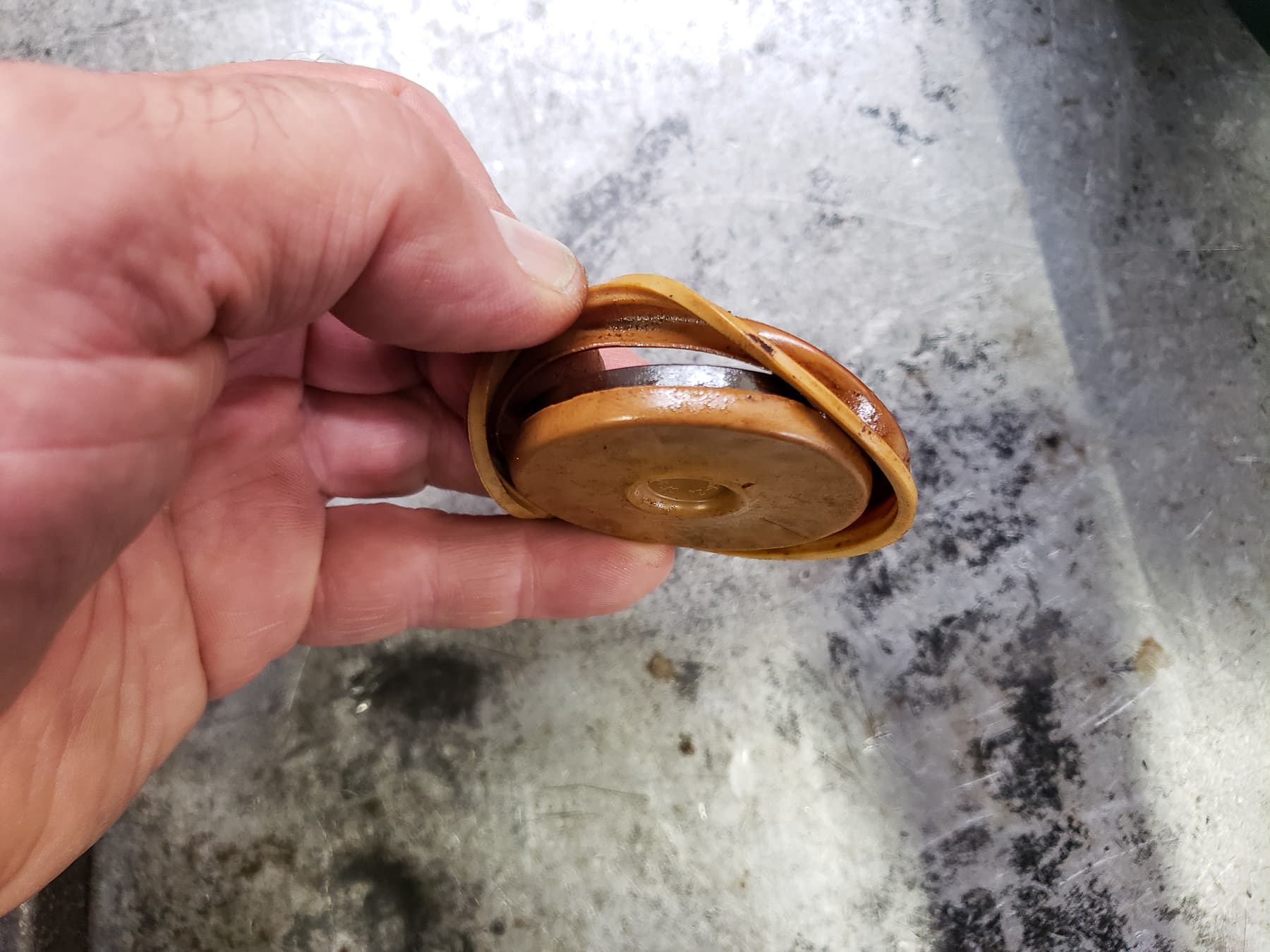 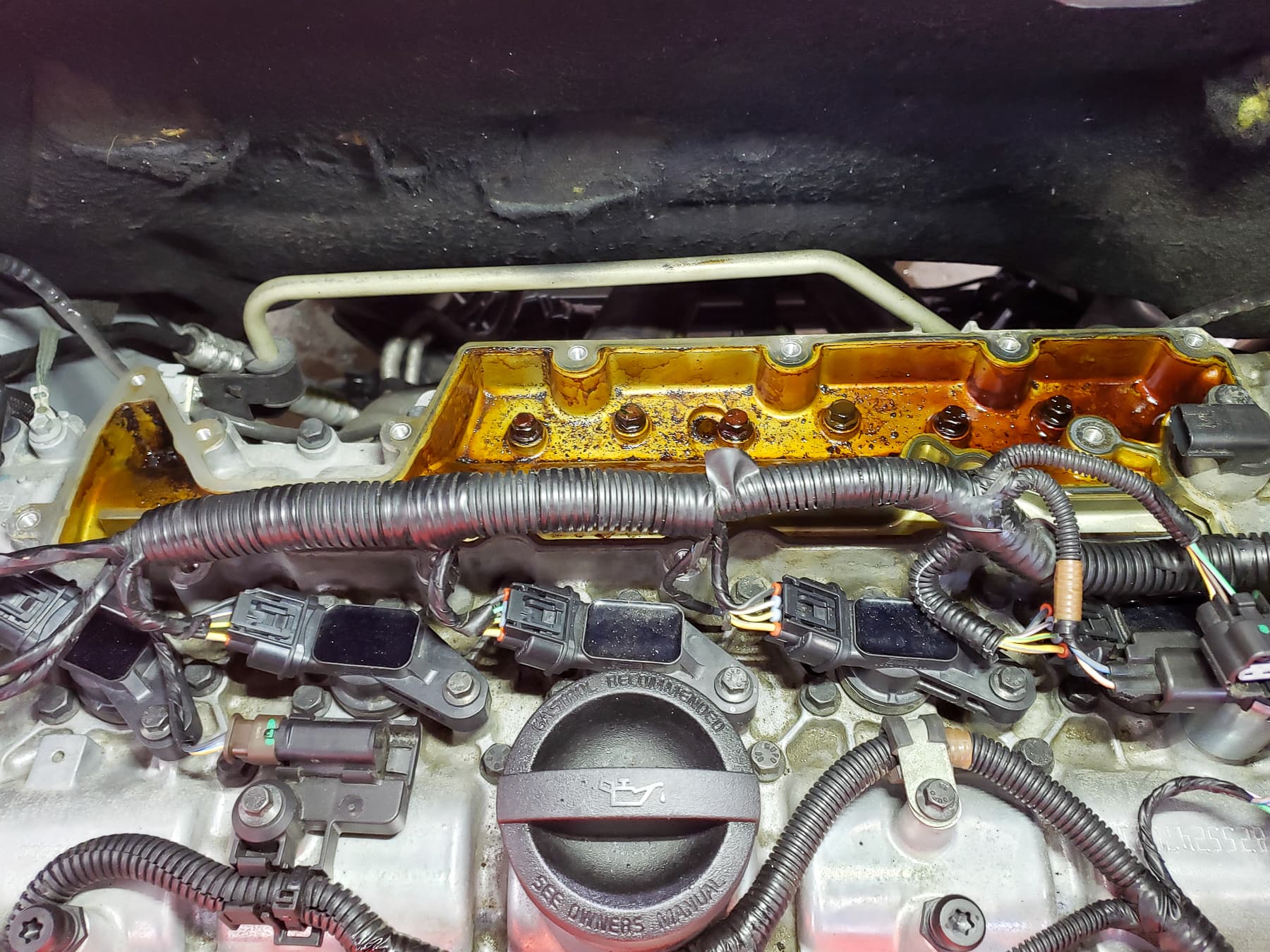 So here's our a nice 2009 LR2 really good, again, really good condition. I was thinking we have a lot of clients who keep their cars in good shape. So this car still looks like a brand new vehicle, which is a good thing. Good to do.

This is the piece right here. This is the top of the crankcase vent unit opened up. The actual problem is this little round area there, and we'll have a closer look, but as you can see these are where all the bolts spouses is quite a few bolts that hold a oldest piece on, but it's fortunately accessible, not buried as these are on some vehicles and engines.

Here's the underside view of the part. Again, not much to see it's a piece of plastic and, again like the vent valve unit is basically over here in this particular area here. But there's basically suction from the intake manifold. And then the rest of it connects to this area here connects to the crankcase area. So it sucks the fumes out of the crankcase.

And what goes wrong with it? There's the unit there. But this is the rubber diaphragm. This is the part that goes wrong. There's a spring and a diaphragm and depending on engine vacuum, it will actually suck a certain, predetermined, I would say calibrated, that's the word I'm looking for a calibrated amount of combustion gas back into the engine, burn it up, which is a huge reducer of emissions.

There's the problem with the unit right there. You can see this rubber diaphragm was torn and that's what was causing her issues. So you know how we knew besides once we heard the noise, what's a really good indicator of this problem is when you open your oil filler cap, all of a sudden with the engine running, it's enormous amount of suction. And sometimes it actually requires a bit of force to lift the cap off, not pliers or anything, but like the hand force is abnormal and you can hear a huge amount of suction. And you'll notice an enormous kind of change in noises and suction of the engine. So that's, that's a good indicator that this part is blown.

Mark: So again, why do they use an electric, or a ... So it breaks. Why again? Why is it there? Why, why is it, what is this doing in terms of the vehicle?

Bernie: Yeah, so as I mentioned, it's emission reduction. That's the primary purpose. This part goes by a couple of different names. I call the crankcase vent valve. They may call it a PCV valve, which is positive crankcase ventilation. That's kind of the more common term.

But the whole purpose of this device is to basically take the blow by gases that occur in the crankshaft and internal combustion engine and suck them back into the intake manifold, re-burn the gas because the pollutants that come out of crankcase blow by gases are hundreds of times worse than what comes out of your tailpipe.

In the old days and we're talking back in the sixties, with a gasoline internal combustion engine before they had PCV valves, you'd have to think of a road draft too, and that would vent that the crankcase gases. Crankcase gases happened because as the combustion process occurs, some of the combustion escapes past the piston rings and goes in the crankcase. If you didn't have a vent, they would just blow something apart in the engine. Like the oil pan would blow off or something like that. So having the vent, allows the gases to escape. But if you ever smelt these gases, I mean, it'll knock you out for about two seconds. They're they're just horrific. So that's what the PCV valve basically reduces that emission.

And so these are just a little more sophisticated of a system having that diaphragm like that, but a lot of people might be familiar with the old traditional PCV valve, just a little round metal piece of plastic elbow, and it used to be the kind of thing you'd change every couple of oil changes on an old American V8 or some Japanese cars. But it's become much more sophisticated and often part of the engine.

Some engines they're even actually part of the valve cover. Some of the PCV valve goes bad. You have to replace the whole valve cover, which can be a pricey repair.

Mark: So is this unique to Land Rovers that these wear out?

Bernie: No, it's not. I was kind of alluding to in the last item I mentioned, you know, they used to be a kind of easy replacement item in the days of the little PCV valve, but this type of big diaphragm PCV valve is commonly used on European cars and they do fail on pretty well everything. BMW has some rather elaborate, even larger ones and more difficult to access units, on their 3 series for their straight six engines for many years, like in the early2000s, they failed all the time in a similar fashion to this one. So it's a common replacement item and we do a lot of them on Land Rovers, but they don't all require replacing, this unit the V eight engines, the V6's they use a different similar concept, but you can actually just replace the diaphragm with a kit. So it makes for easier and less expensive repair.

Mark: So how did the vehicle run after the repair?

Bernie: Oh, fantastic. Except, there was actually one issue and that is the noise went away and then it would kind of reoccur in kind of a strange fashion. So, our solution for that was basically there was a reprogramming procedure, not a reprogram, but a relearn, procedure with the engine computer.

So you know, what happens is, of course, if the engine has been running for a while, like this, the fuel system adapts to this excessively lean condition. That's that's occurring from the torn PCV diaphragm. And once you to replace the part, it works better, but the computer isn't fully adjusted and given time it would probably work its way out.

But, of course, you know, delivering to the customer with noises, doesn't instill a great deal of confidence that the repairs done properly. So with the reprogramming procedure, it basically, resets the fuel trims and mixtures back to normal. And then, the vehicle will compensate and adjust from there. But basically that repaired it all.

Mark: So we've done quite a few podcasts about the Land Rover LR2, what's your feeling about the reliability?

Bernie:  Pretty good car. There are a lot of things that do happen. I mean, this vehicle is the same as a Volvo XC 70. And a couple of perhaps other Volvo models, but same as XC 70 Volvo. As a matter of fact, I didn't point out with that one of the early pictures that I shared earlier says FOMO CO right on top of the part. So this is like when Ford owned Volvo and Land Rover, you know, they built basically this platform. So it's pretty good.

There are some things that are, you know, that we've talked about a lot on podcasts, the rear differentials on this vehicle will go bad. It's a guarantee at some point that the rear differential variants would go bad.  The serpentine belts are very complicated, like the drive system, so that that's a very expensive item to repair as well in these vehicles. But overall they are pretty good for reliability and it's a nice size little compact SUV, all wheel drive vehicle.

Mark: If you want expert repair on your Land Rover or Volvo in Vancouver, the guys to see are Pawlik Automotive. You can reach them at (604) 327-7112 to book your appointment. You have to call and book ahead. They're busy. Check out the website pawlikautomotive.com. YouTube channel Pawlik Auto Repair, hundreds, not exaggerating, hundreds of videos on there about all makes and models, all types of repairs. We appreciate you listening to the podcast, watching, leave us a review. If you like what we're laying down. Thanks for Bernie.

Bernie: Thanks, Mark. Thanks for watching. We really appreciate it.