Mark: So today's victim is a 2009 Mercedes that had a problem with its axles. What was going on with this car?

Bernie: Yeah, so the vehicle came to our shop, towed in because it would barely accelerate. That was basically the client's concern, the car wouldn't accelerate. The check engine light was on. I believe he may have had it looked or there was a thought there was something wrong with the transmission because the engine seemed to run fine, but it just would barely move forward. It would move, but very minimally.

Mark: So, okay. How do you test and diagnose what the heck is going on from there?

Bernie: Well, the first thing would be a road test, but in this case, you know, it was pretty evident what was happening in the shop parking lot. So we drove it into the shop, connected the scan tool to see what kind of trouble codes were stored, and there was a gearbox error code.

I don't have the number in front of me, but that was basically the code description, gearbox error. So it did seem to point to it being a transmission issue just based on the scan tool. And this is important that people think well, don't you just plug it in, it tells you what's wrong? Well tells you an area that's wrong, it doesn't tell you what is wrong. So that's a myth busted right there.

Mark: So what did you do next?

Bernie: So, next thing, of course, is to do an inspection. We hoisted the vehicle, had to look, inspected the transmission fluid, did a visual inspection looking around, and Ed who was working on it, noted that when you spin the wheels he could see some grease at one of the front axle shafts of one of the CV joints, which isn't normal. You shouldn't see grease coming outta the CV joint boot. Noticed that and then went to spin the wheel and noticed that the axle wasn't turning. Only the wheel was turning. So there was kind of a clue that the CV joint on the front left axle was broken. This is a 4MATIC car, it's an all wheel drive car.

So things have to be in pretty decent working order. So we figured, okay, that's gotta be the first place to start with replacing the axles.

Mark: So what was the process? Walk us through what you actually repaired.

Bernie: So we basically replaced both front CV axles. One was broken, and the other's you could see a bit of grease leaking out of the others too. So I'll just show a couple of pictures here and I got a nice little video here too. It's kind of fun. 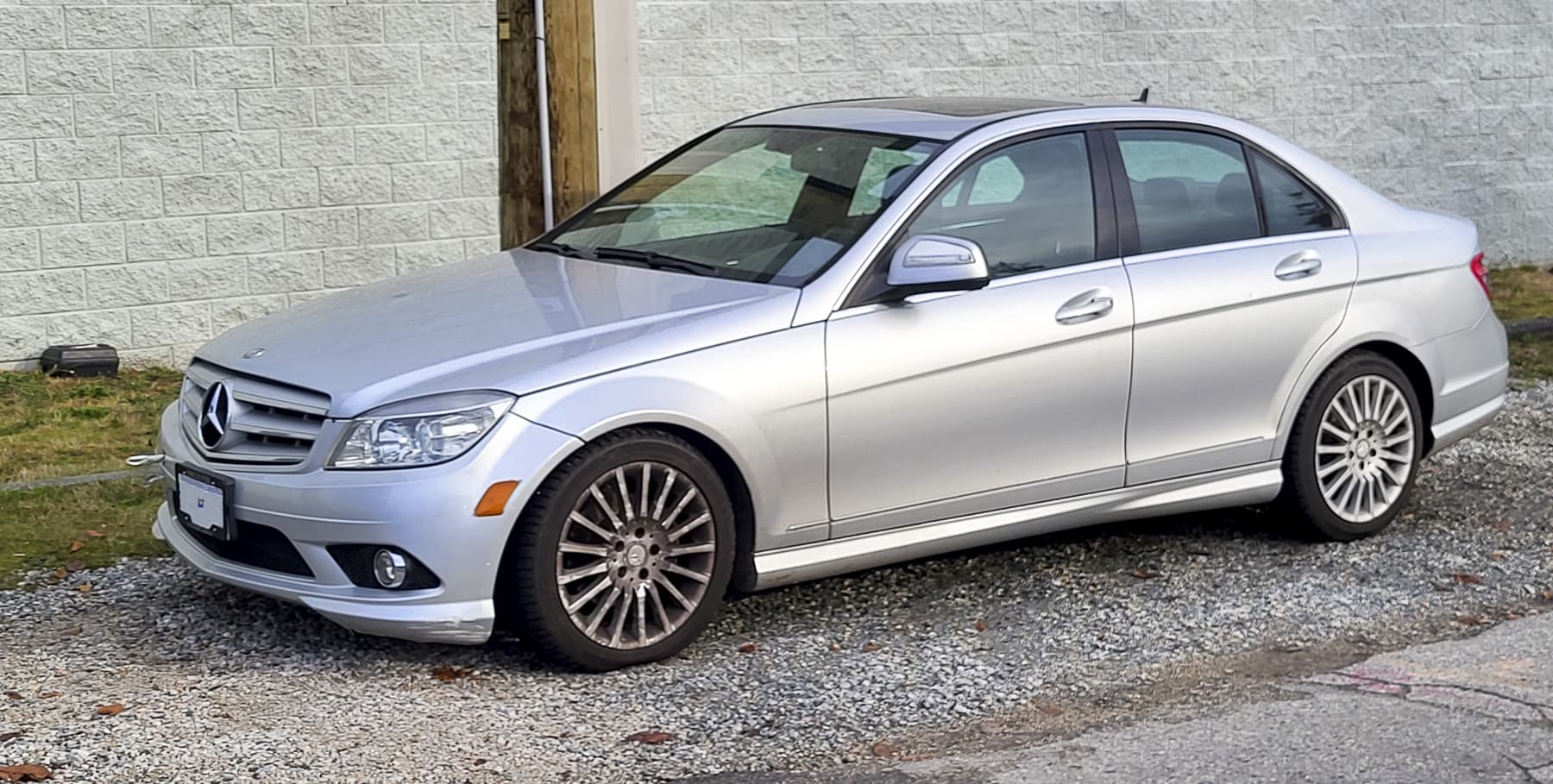 And these are the old CV axles that we pulled out of the vehicle. So you can see this boot is very deformed. This was the actual one that had the broken CV joint. And you can see a lot of grease here, but also this is the axle from the other side and you can also see a lot of grease on this one too. So there was some issues with this. I actually didn't notice until I looked at this photograph to put up on the podcast, but you can see some lettering on here. 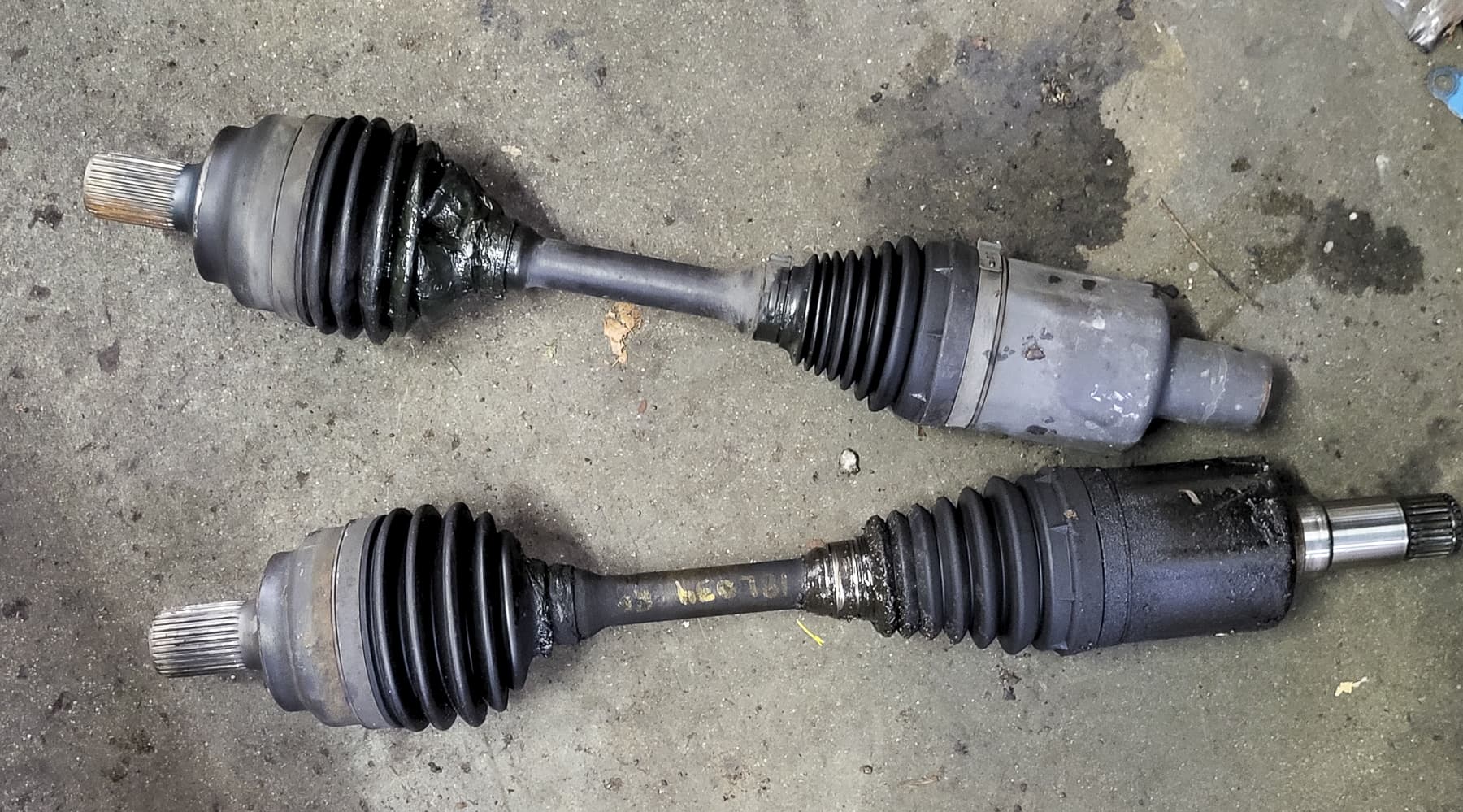 It almost, looks like this is an auto wrecker or a used replacement axle. They often mark things like this. So not sure the history of the car. But anyways, this axle looks like it may have already been replaced with a used one, but we put brand new parts in.

I also have a video here to show just play this. This kind of shows what what we found. That shouldn't happen, by the way, just in case you're wondering. You should not be able to turn that whatsoever. So that's kinda one more time. That shaft should be fixed to the end piece.

There's a little picture show. So we basically replaced both axles cleared trouble codes, and road tested the vehicle.

Mark: So how did it work after you replaced the axles?

Bernie: Yeah, it was good. It fixed everything. So changing axles on this vehicle is not the cheapest of jobs, but it's a lot cheaper than a gearbox. So it was good news for the owner of the car.

Mark: CV joints, constant velocity joints, have been around for a long time. How are they for reliability?

Bernie: Usually they're pretty good. It's not very often that they break, but they do from time to time. I mean, most of the times we replace 'em is because the axle boots are blown open and they leak the grease out, or they make a clicking sound. You go around a corner, if you hear a really sort of sharp snapping click, that's a sign of a worn out CV joint usually.

Used to be way more common. I mean, the quality of CV joints is way better than it used to be. I'm thinking back in the seventies, eighties, I mean so many CV joints would wear out on so many cars. Especially Japanese cars. As much as Japanese cars have a really good reputation, there were certain parts that would just wear out on all of them. And their CV joints were crappy.

And actually a lot of German, a lot of cars in general, but nowadays are pretty good. But, you know, these are the kind of things we see to replace 'em nowadays if they break. They're actually pretty reliable parts.

Mark: Do you ever rebuild these parts?

Bernie: We don't. There was a time when we used to, especially when the boots were blown open. We'd take the joint apart, clean the grease out, put fresh grease in, put a new boot on it. It was almost like a maintenance service that we would do. You see the boot cracking and would be about to go.

But yeah, nowadays we never do that. Axles used to be very expensive. They're much cheaper now. There's so many aftermarket axles, I mean, made in China, quality isn't quite as good as OEM, but you know, some of 'em are just ridiculously cheap. So it isn't even worth us taking it apart and doing anything with it. And then you get a new inner joint, new outer joint, you got new boots and everything. So it's much better.

Mark: And do you see these sorts of issues commonly on these Mercedes 4MATIC models, four wheel drive models.

Bernie: We have had a few of them where we've had some CV joint problems. None with this broken axle. I can remember a while back, actually the car wasn't even that old, it had some clicking or there was something wrong with the joint where it caused some weird vibration issues. So I think that they're not the most reliable part on these cars. But why this one broke, it's hard to say.

Mark: And how are these Mercedes C230s for reliability?

Bernie: Generally they're pretty good. I mean, they are a European car, so a few more things than usual tend to go wrong, but they're a pretty good car. You know, with the 4MATIC, of course, there's a few more parts involved.

These axles being one of 'em. And a transfer case. And drive shaft. Differential. So it makes for a more complex vehicle and a few more things that can go wrong. Pretty good cars, but you will spend more money on them just because of what they.

Mark: If you're looking for service for your Mercedes or your CV joints, in Vancouver, the guys to see are Pawlik Automotive. You can reach them at their website to book, pawlikautomotive.com. Or you can call them. You can call and book. They'll actually talk to you, (604) 327-7112. They'll get ready for your appointment and they'll make sure that you're looked after. Remember, 24 time winners of best auto repair in Vancouver as voted by their customers. Thank you so much for watching and listening. Thanks Bernie.