Mark: Hi, it's Mark from Top Local. I'm here with Bernie Pawlik, Pawlik Automotive in Vancouver. Vancouver's best auto service experience. Why? Because 22 times they've been voted Best Auto Repair in Vancouver by their customers. We're talking cars. How are you doing Bernie?

Bernie: A diesel particulate filter. And what that does, we can just cut right into that. It basically, traps those nasty black particles that come out of diesels. And it stores them, burns them off and sends them out into the air fresh and clean, which is why you can stand you know, by the tailpipe of one of these diesels and not feel like you're about to die like you would with the older ones. A lot of people remove them. We won't get into the politics of that. I like having DPR's because I like clean air. You know, we do the best we can with our fossil fuels for the time being. So this is one of those things that makes it happen, but it's an added expense on a diesel, you know, and things do go wrong with it over time.

Mark: So what were the indications that there was a problem with this?

Bernie: So the vehicle came to our shop, the owner had a couple of concerns. He was actually having add a fair bit of oil to this engine. So this is the three litre Mercedes diesel, having to add a little more oil in than he figured he should have. And, also the check engine light was on. A bit of a lack of power too. So next step testing, of course, we found there's a code for a high soot content in the DPF, diesel particulate filter. And also doing some visual inspections on the vehicle, looking around, we figured that the PCV system was probably part of the reason it was using too much oil.

Also, the high exhaust back pressure can cause some issues with oil consumption as well. So a partially plugged DPF could do such a thing. So, you know, when the soot content this high, it's not flowing as well as it should. So for repairs, we ended up replacing the PCV system and we opted to do a cleaning on the DPF. There's a few options with DPF's. You can either just flat out replace it, which is the most expensive option. And there's a couple of different cleaning options. So we have a chemical cleaning process that we do in our shop. That's what we did on the vehicle.

Mark: So what's involved in cleaning, using this chemical system?

Bernie: Yeah. So the cleaning process is basically a two part chemical process. There's a sensor we remove right in front of the DPF. I'll show a picture in a minute, we remove the sensor. There's a little tiny little wand that sprays a chemical in, and then, we leave that in for a little bit and then spray a second chemical, then you run it and that, cleans it out.

Not always a hundred percent effective, but that is the way we do it. So let me just, share some pictures here. So this is the DPF.

So, I guess, you know, by seeing it lying on the ground, kind of leaves the conclusion, we actually ended up replacing it on this vehicle in the end.

I'll we'll look at that. This is just kind of gives you an idea of the whole length of the pipe. This connects to the mufflers and the tailpipes. There's a closeup of the unit. 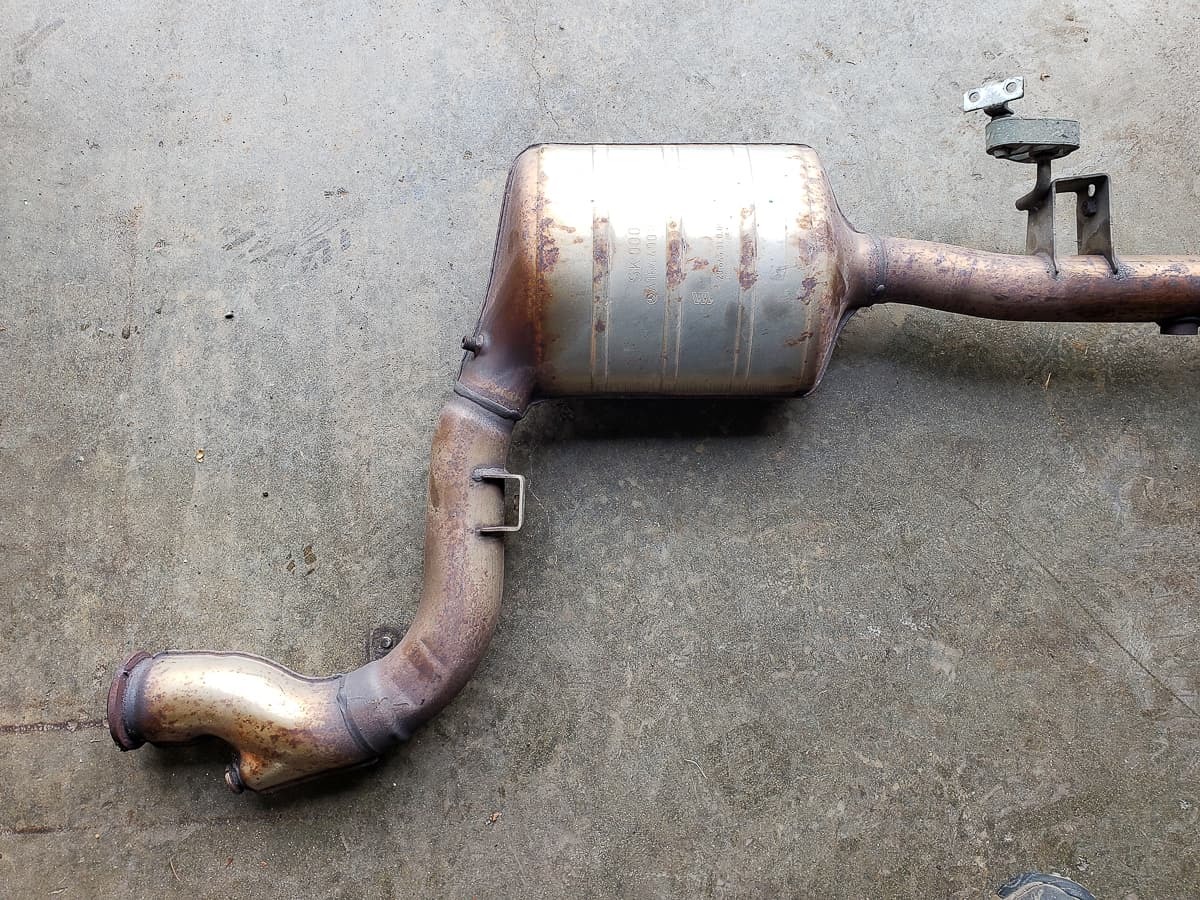 This is where we spray the cleaner in, right in this area here. So there's a sensor that we remove and we're able to spray, and there's like a honeycomb web of, I don't know exactly all the details of what's inside of it but basically that's where the cleaner kind of goes to work and, softens the particulates and helps burn it out quicker.

Mark: That's the blue part of this.

Bernie: Yeah the add blue fluid. Sometimes called a diesel exhaust fluid add blue. So that's part of the process. And, you know, Volkswagen, you know, the diesel-gate Volkswagen, they decided they didn't want to put that add blue system in because it's, it adds a bunch of extra money.

And so they fudged their numbers saying their diesels could be just as clean, but if you have this and this, it makes it really clean. Just cost more money, more stuff to add on.

Mark: So you mentioned that they're not the cleaning procedures, aren't a hundred percent effective. How successful generally are there?

Bernie: We find that, you know, in our shop, it's kind of a 50-50 type of thing. So this vehicle to do a little history. So it was a couple of weeks previous to this week that we, you know, did the work and, the check engine light did come back on. The oil consumption had dropped, which he was happy about from the PCV and POS cleaning may have helped, but mostly the PCV, I think. Oil consumption had dropped a fair bit, which is good. But basically his check engine light did come back on with a high soot load in the DPF. So we weren't successful with this one. We've done other vehicles where it does work well, it's just, you just don't know until you do it, but it's a fraction of the cost to do a cleaning. And I think worthwhile doing before you change the filter because the filter is a very expensive item to replace.

Now, there are other methods of cleaning as well. There are companies that will actually take these things. They'll bake them very high temperatures and blow them out. We haven't had a lot of success with them. We've had it done on a few, like Mercedes before, it hasn't worked. So we don't really normally we recommend it.

And a lot of these companies do that, they're really targeted more for large trucks, tractor trailer, semis, and that kind of thing, which actually works quite well. I'm not sure on, you know, sort of, your American light truck diesels, how well they work. We haven't run into too many issues with those yet, but definitely works well with big trucks.

So it's really, at this point we gave the client the option. Look, you know, we could have it baked. It probably won't work, or you know, let's replace it. It'll work better. And so he did it.

Mark: So first, I guess what's the typical lifespan of a DPF?

Bernie: You know, it's hard to know, and it really depends on the kind of driving you do. So this is a 2009, it's got about 154,000 kilometres on the vehicle, which is not a lot for a vehicle of that age. So what that tells me is this vehicle has probably been mostly city driven, short trips, and that's definitely much harder on a DPF than it would be had this person done nothing but highway driving. So how you drive it. Makes a big difference. And if you have a diesel, it's always important to make sure it gets warm. And you do at least some long trips. Ideally, if you just scooting around town a little bit, see if you can get up for highway drive on a Sunday, or, you know, whatever make some excuse to go for a highway drive.

I know it seems kind of wasteful, but it's really much better for the engine to get it good and hot. And you know, warms the engine up, cleans the exhaust system out, get out for a good burn down the highway. And that way it'll burn the particles out. So it may well be that the person never did this. That's kind of like the best thing you can do for that sort of thing. But I mean the average life kind of hard to say, it really depends on usage.

Mark: Yeah so buy a diesel for its intended use, not driving around in the city, stop and go driving is the worst thing for a diesel.

Bernie: It is the worst thing for sure. And people often buy these, you know, before you buy diesel, you need to know what are you buying it for and how are you going to use it? You know, if you're just driving five miles to work and back every day, don't buy diesel.

Mark: Get a bike.

Bernie:  Get a bike, absolutely. Yeah a bike or you know, something but just don't just, don't buy a diesel cause it won't work for that. But if you do happen to do that every day, and then you're heading off, out of the city every weekend, then it could work. But it really depends on your usage, but often with a car type or very light duty diesel like this, people buy them for the wrong reasons or they get sold on the idea. Oh, it's got great fuel economy. And the truth is it does, but the repairs are very expensive. So I think you need to be able to justify the repairs.

Mark: So, how did the vehicle work after you replaced the DPF?

Bernie: It was awesome. So, you know, definitely felt more powerful, the check engine light remained off and we can look at data on the computer and it will actually tell what the soot  load is of the DPF and it was at zero so, which it should be since it's brand new, but it was, you know, all reset. Everything was good. So, so yeah, worked great.

Mark: So maximizing the life of your DPF is basically get out and drive up to the Caribou and back once in a while.

Bernie: Oh yeah, that'd be really good, but you don't even have to go that far. I mean, we live in Vancouver. If you drove from Vancouver to White Rock, I don't know, go out and have some dinner in White Rock once a week or something like that.

Mark: And don't spare the horses.

Mark:  So there you go. If you need some service for your Mercedes diesel and you want experts who will give you the straight goods and fix it for you in the most economical way possible, the guys to call are Pawlik Automotive. You can reach them at (604) 327-7112 to book your appointment in Vancouver, BC, Canada. You have to call ahead because they're busy and they're always booked. So you got to book ahead and if that's not working for you, you can check out our YouTube channel. Pawlik Auto Repair, hundreds, not exaggerating hundreds of videos on there for the last eight years. We've been talking about the repairs of many, many vehicles, all makes and models, all kinds of repairs. Or the website pawlikautomotive.com. We appreciate your watching the videos and appreciate you listened to the podcast. Leave us a review if you like what we're doing, even if I'm stumbling all over my words. Thanks Bernie.

Bernie: Thanks Mark. Appreciate you watching.