2009 Toyota Sienna Air/Fuel Ratio Sensor Replacement is our latest featured service, brought to us by a client from Delta, BC. 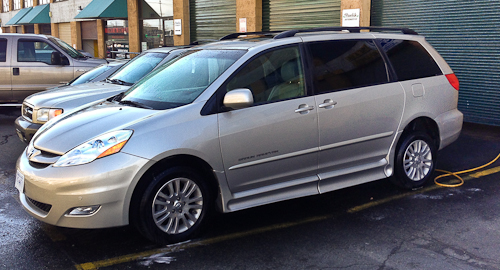 The Air/Fuel Ratio Sensor is an advanced form of oxygen sensor. The oxygen sensor or O2 sensor as it is often called reads the oxygen content in the exhaust, sends a signal to the engine computer which fine tunes the fuel mixture. The Air/Fuel Ratio Sensor does the same only it can operate over a wider range of air and fuel mixtures allowing for better fuel control and emission reductions.

Modern vehicles with their sophisticated computer management systems for fuel injection, ignition and emission controls rely on a number of sensors for information. When a sensor fails to send the right signal, and the computer suspects as much, it will make its own decisions based on other data. Often, you won’t notice a difference in the way the engine runs but subtly something is not right: your engine performance will be slightly less than optimum along with your fuel economy, and if you could measure it, your exhaust emissions would be worse.

While performing our thorough diagnosis on the Sienna we found that the bank 2 air/fuel ratio sensor was bad intermittently. We confirmed this by running tests on our scan tool and manually altering the air/fuel ratio while watching both sensors (there are 2 on this vehicle). It was clear that the bank 2 sensor made many erroneous readings due to an internal defect. 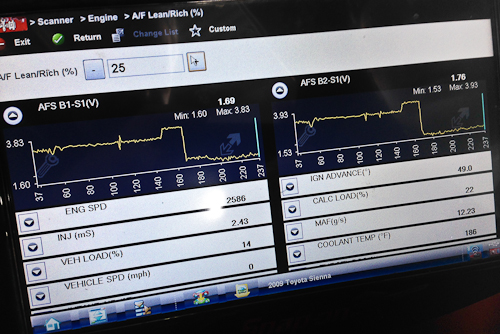 Scan tool in graphing mode performing A/F ratio tests. The readings are with the new sensor installed. Note the readings are virtually identical. With the old sensor the readings on the right graph would often go to 4.3 volts which was way out of acceptable range.

A proper repair always involves verification, whenever possible. We were able to do the same scan tool test as previous and found that both air/fuel ratio sensors read identically.

The Toyota Sienna has been around for a decade and a half and replaced Toyota’s somewhat quirky minivans: the Previa and the LE before it. The Sienna is conventional in that it has the engine in the front whereas the previous vans had the engines in the center of the van, under the floor. As with all Toyota products this is a well built and durable vehicle.

For more about the Toyota Sienna click here http://en.wikipedia.org/wiki/Toyota_Sienna 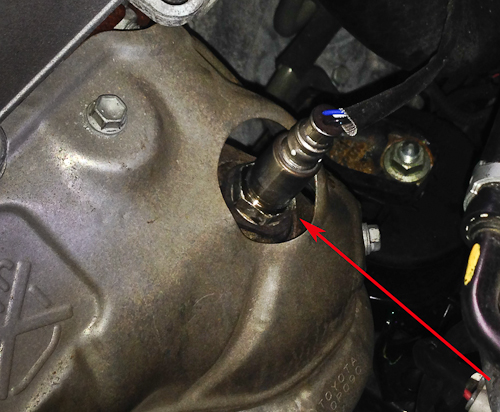