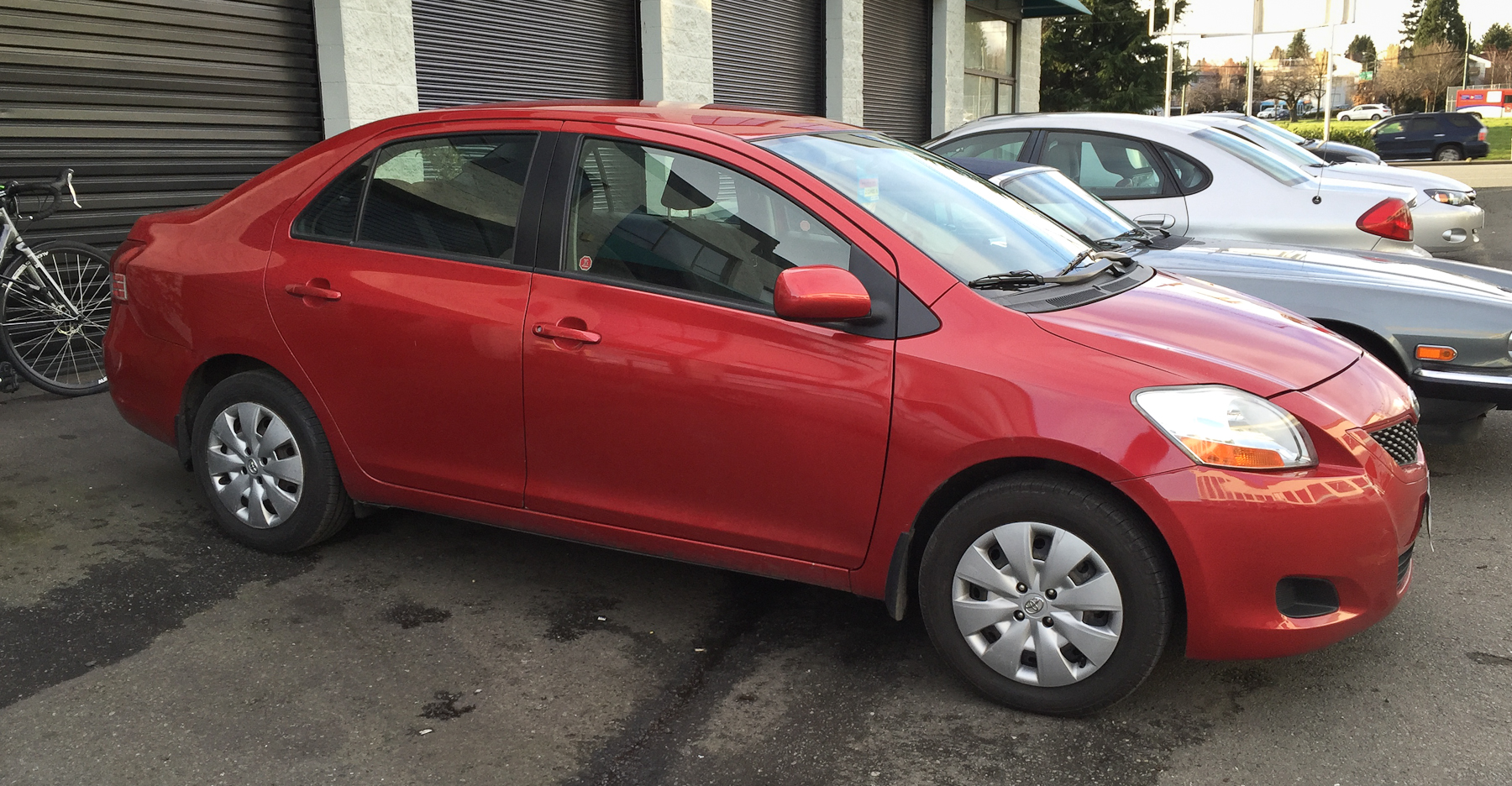 Mark: So we’re going to talk about a Toyota Yaris, a 2009 - there was a water pump problem? What was happening with this Toyota?

Bernie: Well the owner originally brought the vehicle to us not for a water pump problem but for a strange noise that was happening. It seemed like a suspension noise in the vehicle. So we had the vehicle for a couple days, the first day we drove it, we could hear quite a loud racket, it seemed like a suspension rattle in the front of the vehicle, but it only happened under certain circumstances. We did a full comprehensive inspection on the vehicle and never really found anything wrong with the suspension which was surprising, but we did find the water pump was leaking and while we did the water pump, we found a couple of other interesting issues along with that. I'll share a photograph here - so there’s our Yaris, it's a 2009. There’s the water pump, I’m actually one picture ahead of where I want to be: that red, reddish colour stuff around the plug there, that’s antifreeze, Toyota antifreeze is a red colour, and that’s antifreeze that’s been leaking out of the water pump. So the water pump was leaking and that was evident and needed to be replaced. What we found that was interesting when we replaced the water pump is that the bearing was so badly worn in the water pump that the pulley was rubbing against the water pump housing and that red arrow points to, the pulley that sort of, how do I best describe this, the shinier, smoother piece at the bottom of the picture, and that’s touching the housing of the water pump right where the red arrow is pointing. That shouldn’t be happening. There should be clearance of about an eighth of an inch in that area, so the bearing was worn so badly, the water pump housing was rubbing and in the end we figured that this was actually what was causing the noise. Strange as it was, it seemed like a suspension noise but actually under certain circumstances the noise seemed to be occurring while you’re driving. So yeah, that’s what we found. 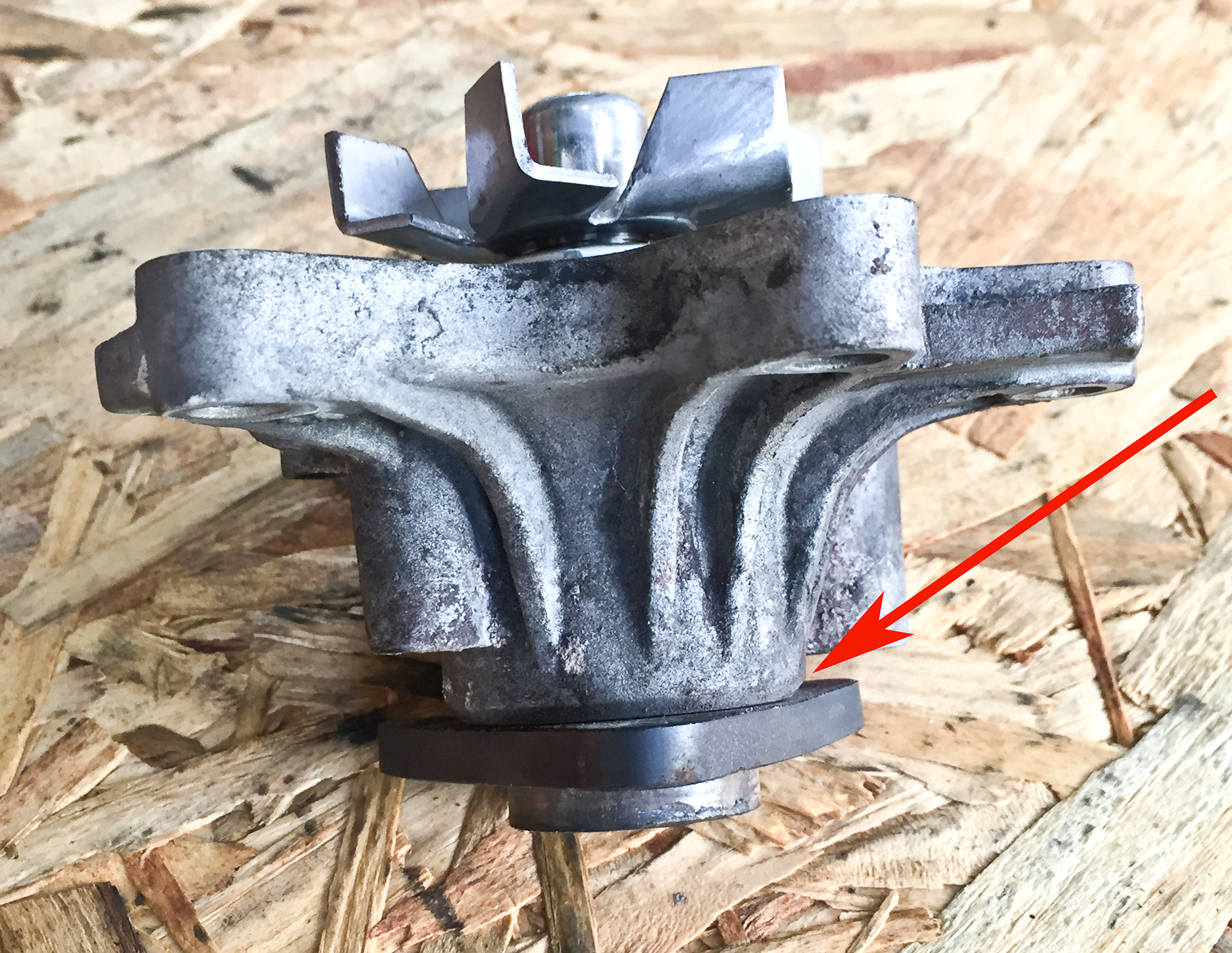 Side view of water pump. The red arrow points to the pulley flange sitting right beside the housing. There should be a clearance of at least an 1/8 of an inch here.

Mark: So do water pumps typically fail on Toyota’s?

Bernie: Water pumps seem to be one of the most common failure items on Toyota’s. I’ve said for years they extremely reliable vehicles and I still say that to this day, they’re very reliable. But it seems like almost every Toyota we look at seems to need a water pump sooner or later. So that seems to be the one part that fails quite frequently on Toyota’s. We’ve done them on all sorts of V6’s, 4 cylinders, Yaris’s, Highlander’s, you know just about every make and model - Even Priuses.

Mark: So if I were a Toyota owner, is there anything I can do to look after my water pump?

Bernie: No, it’s just something that’s going to fail over time, it’s just the way the part’s made. Flushing the cooling systems is really the only thing but the water pump is really a very simple device. It’s a belt driven pump, the only thing that’s in there is the antifreeze, the only fluid in there and like all modern antifreezes in cars it's meant to last five to ten years and 150,000 or more kilometres. So there’s really nothing you can do to flush it out. The belts are a lot of times self tensioned, when they’re at their proper tension they last as long as they do. It’s just one of those things: water pumps wear out when they wears out. 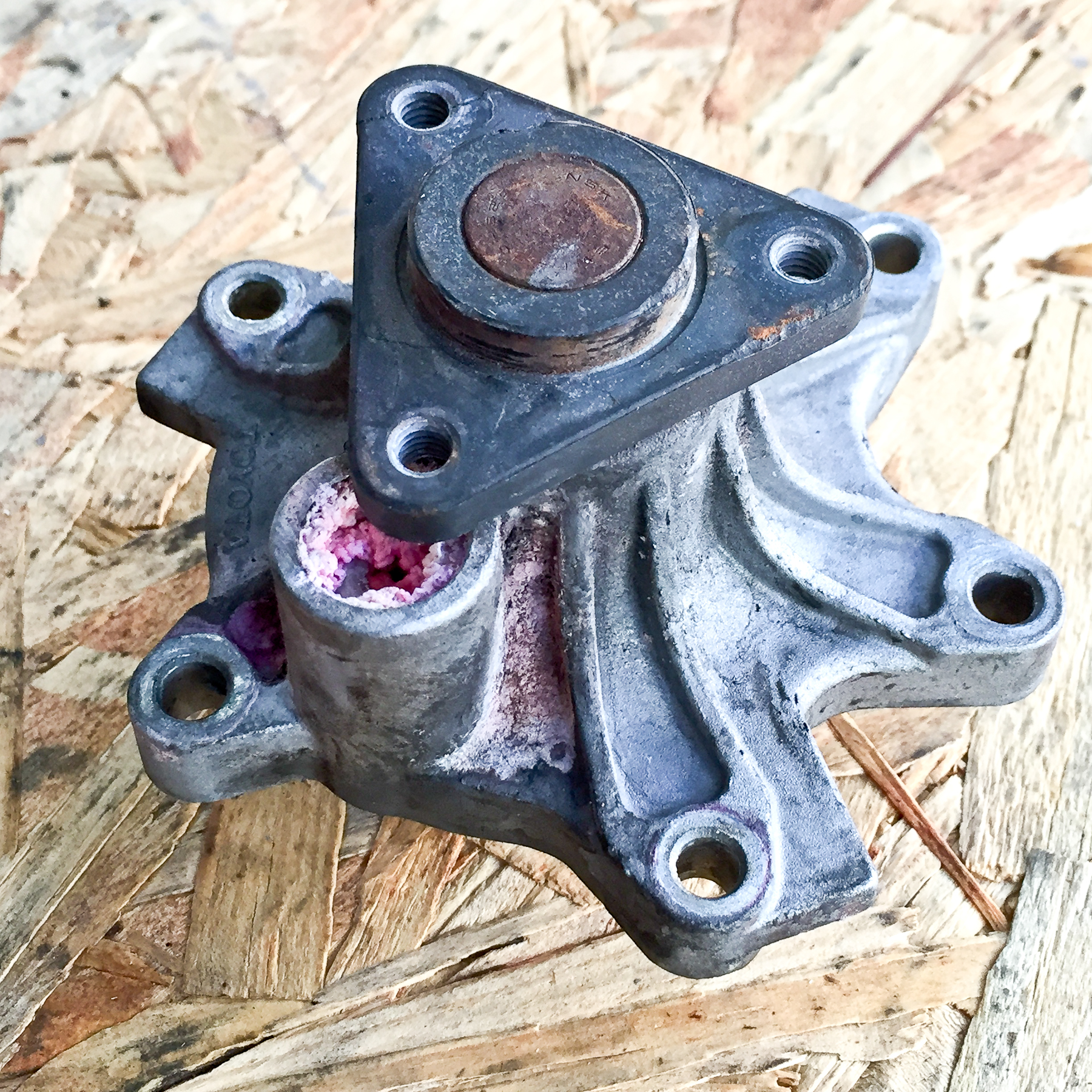 View of water pump: the red crusty deposits are from antifreeze leakage

Mark: So a few years ago, Toyota really got beat up in the press about some problems that they had. So how are Toyota vehicles these days?

Bernie: They’re excellent. I mean I don’t think really honestly think there was ever really a lot wrong with them and I think the media just jumped on it and went crazy because Toyota was overtaking the American manufacturers as the biggest  carmaker in the world. I have a, maybe it’s a bit of a conspiracy theory, but I have a feeling that there were some people didn’t like it very much and pointed some flaws out. Not that there weren’t some problems and things to be fixed but it really blew over so fast that it’s nothing you ever hear about anymore. So Toyota’s were always reliable all the way through. Toyota stepped up, fixed what they needed to do and they’re still amazing, reliable cars to this day. I highly recommend them.

Mark: so if you’re looking for service on your Toyota of any kind, the guys to see are Pawlik Automotive - you can call them at 604-327-7112 or check out their website pawlikautomotive.com. Thanks Bernie