Mark: So today's victim is a 2009 Volkswagen CC, a little bit different car and had a crank shaft seal problem. What was going on with this vehicle?

Bernie: Yeah, it is a bit of a different car. It's basically a Passat, but it's a luxury version. It's a pretty nice car actually, if you're into four-door sedans. It's actually a beautiful car. Anyways yeah, so what was happening with this vehicle. The owner had been to another shop, had some repairs done and he kept having his check engine light come back on for a lean air fuel condition code. That's basically what we scan and found. Had it repaired at another shop a few times and decide to give us a shot at it.

Mark: So what causes that kind of lean code?

That's another one, which is kind of unique to Volkswagen. There's a few other brands of vehicle where the rear main crank seal will cause that issue. And it's kind of unique in the world of car repair air fuel ratio issues. So that's why we're talking about it.

Mark: So what kind of diagnostic test did you do to find, to narrow it down to that was the issue?

Bernie: Yeah, well, there's a number of things we did, but one thing we did do is based on the previous repairs that the owner had had done, we went straight into, among you know, verifying things in a scan tool and testing a few electronic items. We have a device called a smoke machine. It basically injects smoke under very light pressure into the crankcase or wherever we want it to go. And we can see where the leaks are coming out. We did that and sure enough, there was smoke billowing out from the bell housing. The bell housing is the area where the transmission bolts into the engine where the rear crank seal is located.

So that verified right then and there that there's a huge vacuum leak coming from that area. And that was in fact, the main issue with this vehicle.

Mark: Alright, so how can a rear main crank seal cause an air fuel condition problems?

Bernie: Well, basically the seal deteriorates and causes air to be sucked in. Now you'd think the crank shaft seal is there just to seal oil out, and that's the primary purpose. But also, if air leaks in, as the engine is running, there's a certain amount of suction from the crankcase ventilation system.

And if the seal isn't intact it'll cause that to basically suck air into that area. And even though it's not dripping oil in the ground, but the other interesting thing, and I was just going to put a picture up right now. But the interesting thing is after we did the smoke tests, which puts a slight amount of pressure, we noticed there's a big puddle of oil underneath the vehicle on the ground, which was another thing that verified that the seal, in fact, wasn't great. But it wasn't really leaking to any degree, like you would expect the rear crankshaft seal to leak. 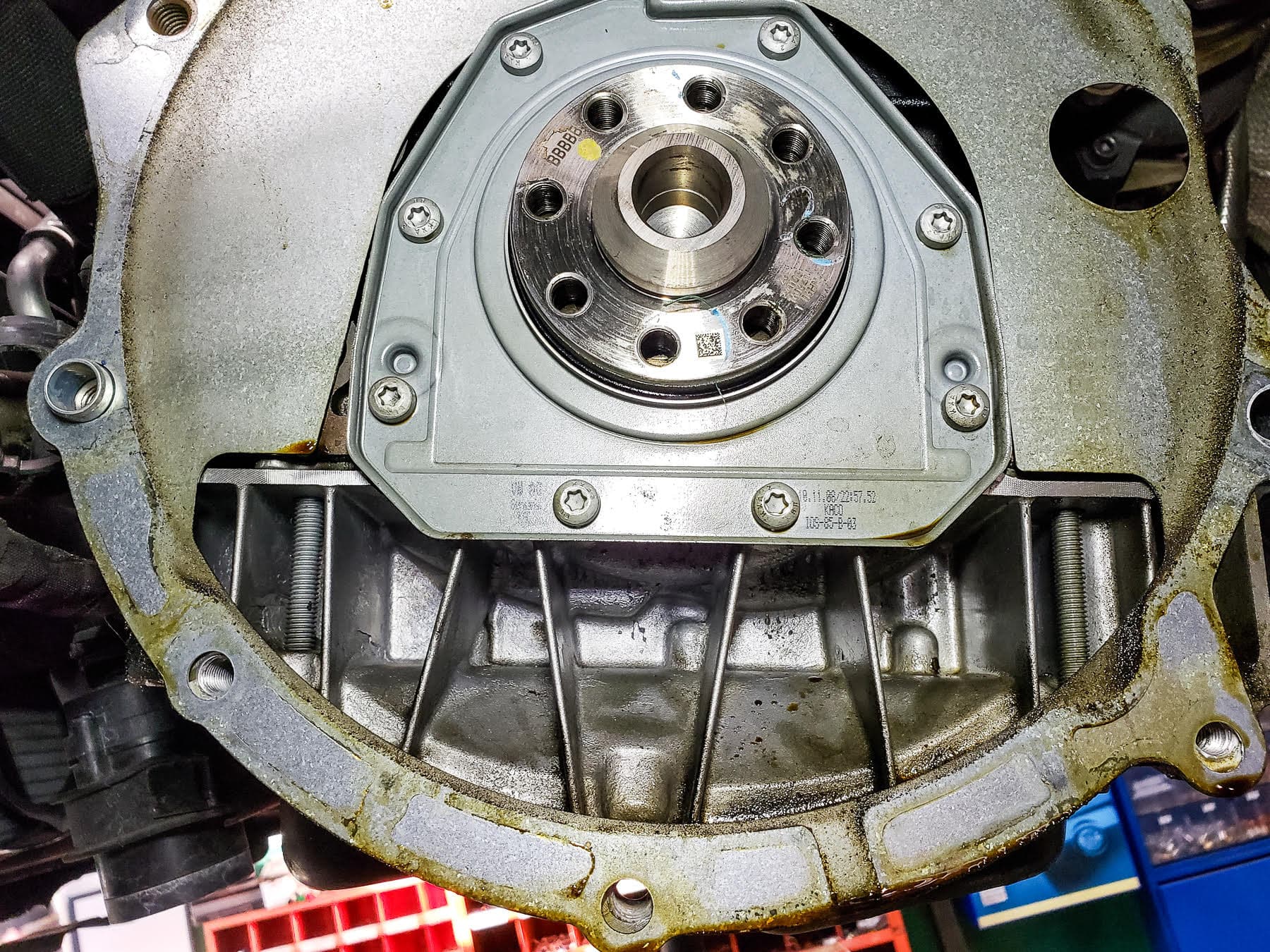 So we removed the transmission. So it is a very involved job. Transmission was removed. This is what we see with the flywheel off. And there's the crankshaft. There's the old oil seal. If you look around here, you can see it's kind of oily. That's what we're looking at, where my most pointer is pointing a lot of oil here. And I'm going to show you a picture of the new seal installed in a minute. But if you can kind of see the seal, this black area here. This is the lip of the seal that rubs against the crankshaft and keeps the oil in and the air out. 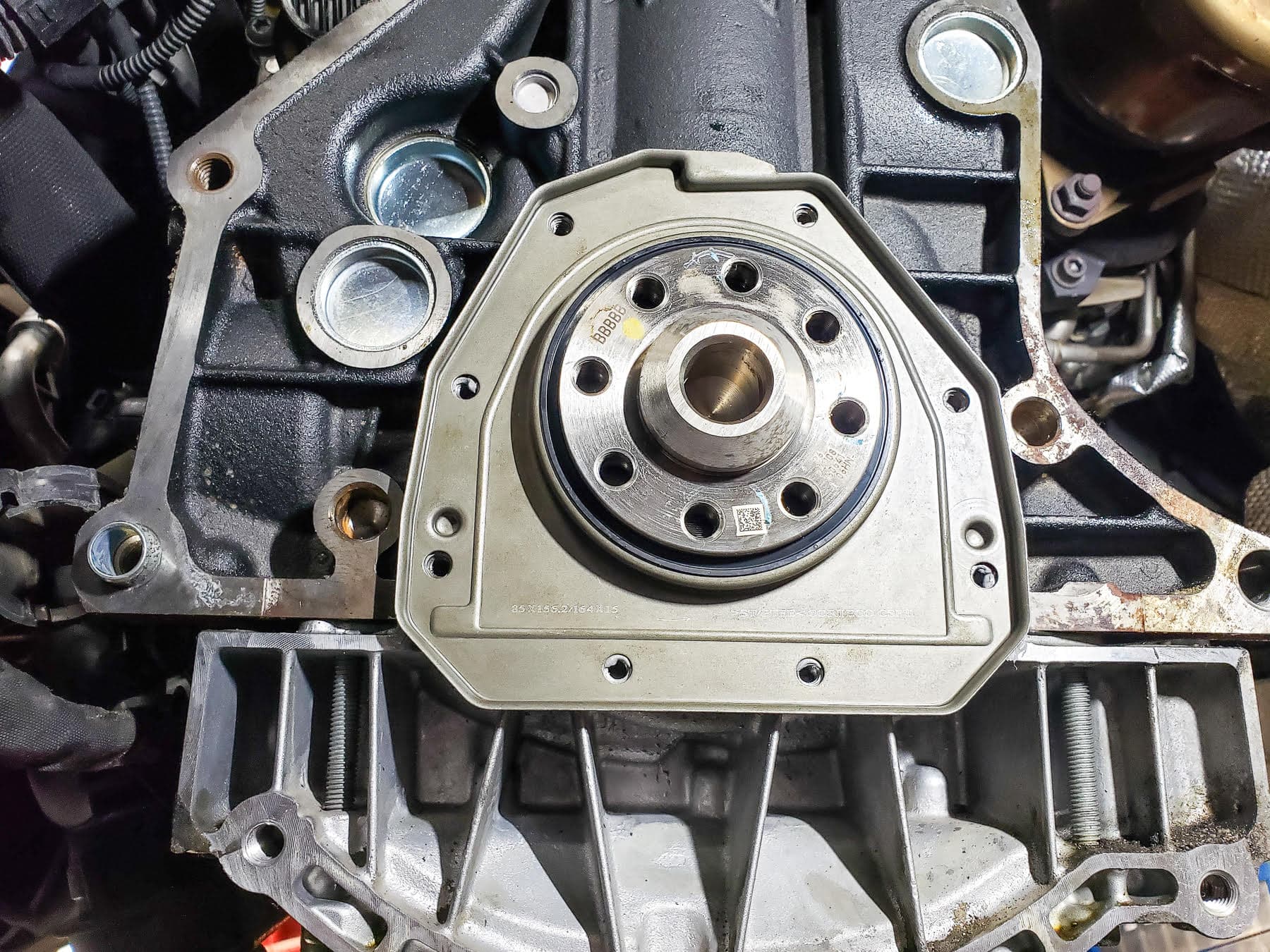 And this is the new seal installed. You can see this black rubber is a lot more pronounced. There's there's a lot more of it there. If you look closely, you don't see any bolts here. This is what the seal basically just put in place. I just took a quick photograph before the seal is actually bolted in. And so when you buy this seal, it actually isn't just a seal. It's actually the seal with the plate and it's an interesting, different design than well, it's getting to be more common on a lot of vehicles. But this seal, it's not like your typical older fashioned seal where it's a pretty thick piece of rubber with a garter spring. It would have like, a soft rubber lip and a spring around it to hold it tight against the shaft. 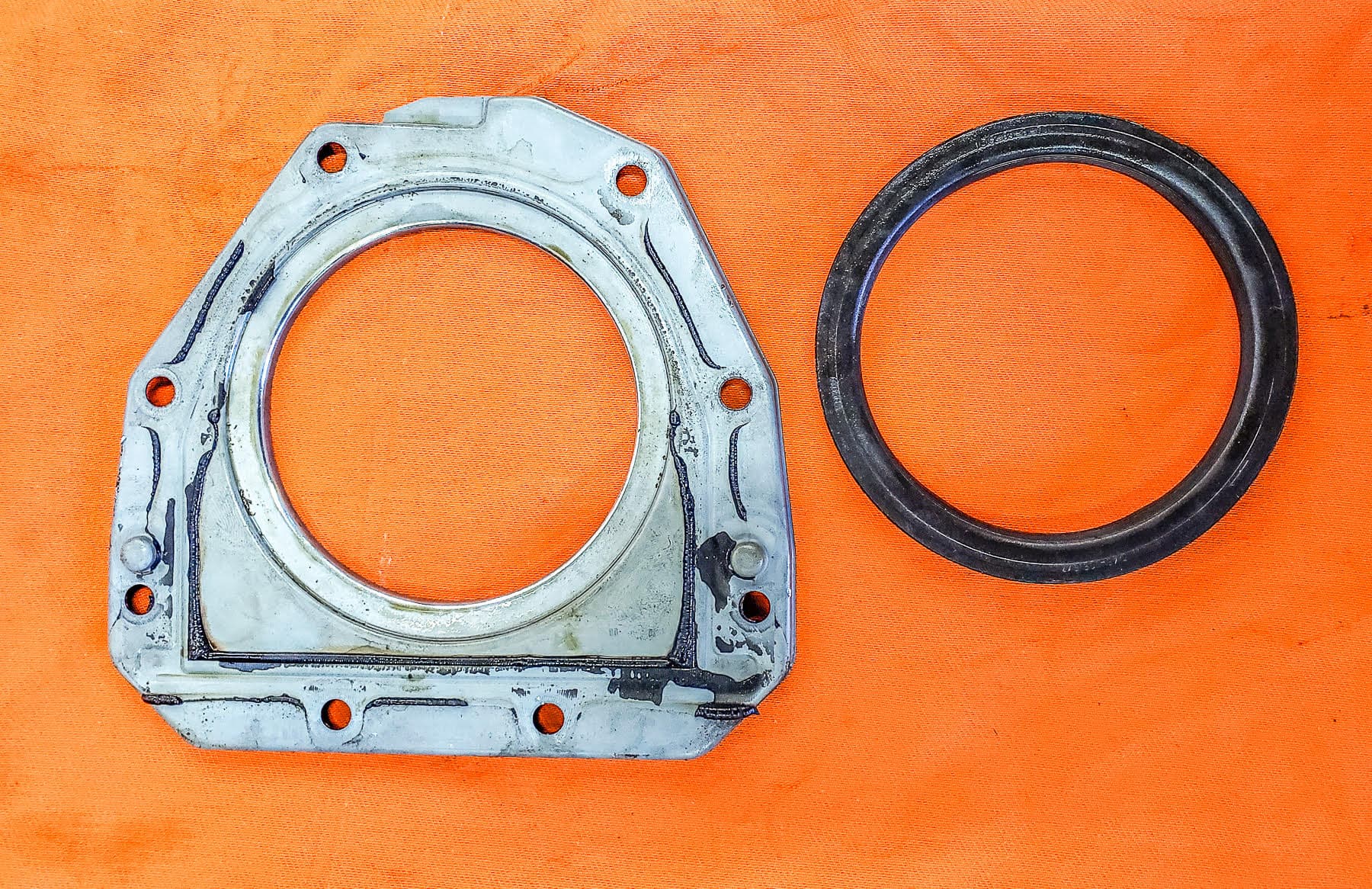 These are more of a harder type of rubber and they fit against the shaft without the garter spring. But the interesting thing is when we took this out, the seal is actually broken off of this metal flange here. And I think that's probably why it leaks vacuum is over time that whatever glue that holds it together, deteriorates, and you know, the air gets sucked in here.

So it's enough to keep the oil sealed, but the air gets sucked in through the seals. So it was basically the seal that came apart in two pieces. And there's our show.

Mark: So did you replace any other parts during this repair?

Bernie: Well, we did actually replace the PCV valve or the oil separator, which is located on the valve cover. Had a discussion with the client and thought, you know, even though he'd had a replaced at another shop, not more than maybe a hundred kilometres ago, we figured it was a good idea for us to replace it.

We put in original equipment manufactured unit on, which is of course, as good as it gets. It worked fine. We verified all the air fuel ratios were all good. So we let it out the door, you know, the a hundred percent guarantee. We give it back to the client and hopefully he can get a refund from this other shop if they do that kind of thing, you never know. But that's basically what we did. So verified, everything was fixed at the end of the day.

Mark: So how did the engine run after this repair?

Bernie: Oh, it was good. Yeah. Ran nice and smooth. Check engine light was off. As I mentioned, you know, we actually can look at the air fuel ratio on our scan tool and verify that it's actually what it's supposed to be and it was, so it was good.

Mark: I guess the next question I have is, is this common to all VW? It's a front wheel drive vehicle. I'm assuming.

Bernie: Yeah. It's front wheel. It might even be all wheel. No, no. It's only front wheel.

Mark: But is this a common, possible problem?

Bernie: Yeah, it is actually quite common on these. You know, it's been a long time since we've done one. So I wouldn't say super common you know, to me, it's when it's really common, we'd fix them all the time. But it is a common issue that causes this and we've certainly done them before and will continue to do them over time for sure. And Volkswagen, isn't the only vehicle where this happens.

I believe that I believe Volvos do it as well, but you know, I think it's some part of the seal design. It just tends to fail and needs to be done, but definitely Volkswagen, it's common.

Mark: How expensive a repair?

Bernie: In Canadian dollars with taxes, a couple thousand dollars, by the time we were done with that, the PCV valve and less without the PCV that added a few hundred dollars to the cost. But yeah, it's not cheap. And you know, one thing the owner asked me, Hey, is it worth doing this repair on the car? And I said, of course the car's in beautiful shape and only about 120,000 kilometres.

So a lot of life left in it, for sure. So, you know, definitely worth the money.

Mark: Yeah for two grand, you got another a hundred thousand kilometres at least, and safe, good driving. And how are VW CCs for reliability?

Bernie: Yeah, they're a good car, it's a European car, you know, I'm always a little jaded European cars. There's always more to go wrong with them, but it's a good car. It's a nice car and pretty reliable.

Mark: If you're looking for service for your VW in Vancouver, the guys to see are Pawlik Automotive. You can book online at pawlikautomotive.com or you can call them (604) 327-7112. You have to call and book ahead, they're busy. Or you can check out and research things on the website at pawlikautomotive.com got hundreds and hundreds of videos all makes and models and types of repairs. And of course, on the YouTube channel. Just search Pawlik Auto Repair, same story, 10 years of doing this almost every single week for 10 years, a lot of videos. And thanks so much for watching and listening. And thanks, Bernie.

Bernie: Thank you, Mark. And thanks for watching. We have a lot of fun putting these together, that's for sure. Thanks.