Mark: So today's victim is a 2010 Honda Civic that needed a new engine. What happened to this Honda?

Bernie: So the vehicle was towed to our shop. The owner was driving and the engine seized up and needed to be replaced. So he brought it to our shop.

Mark: So I know Honda's like any car wear out, but an engine seized, what happened to this engine? That's pretty rare.

Bernie: Yeah, it is rare for Honda. Their engines are one of their stronger points. What happened is the owner was driving, it been raining a lot in Vancouver. If you watch the news, we've had some record epic, almost biblical rainstorms. He was driving along, hit a puddle water got sucked into the engine and seized the engine up.

Mark: So was it an extremely deep puddle?

Bernie: I don't know how big the puddle was, but the reason why, because normally so I mean the way an internal combustion engine works, it sucks air into the engine, compresses it and with fuel mixed in fires a spark. So normally when a car is manufactured, they usually put the air intake fairly high up on the engine, it'll be like three feet off the ground. In this case, the owner put in a cold air intake, a performance modification, and this was mounted quite low down into the bumper. So it didn't take much of a puddle. I mean, all you'd have to do is hit a foot deep puddle of water or a huge amount of spray to suck air into the engine.

And apparently I believe the story was, he was driving on the highway when it happened. So engine revving at maybe two or 3000 RPMs. Huge suction of air. Water in the piston compresses. Bam blows the engine apart. It literally blew it apart. And we can have a look at some pictures because that's the fun part. 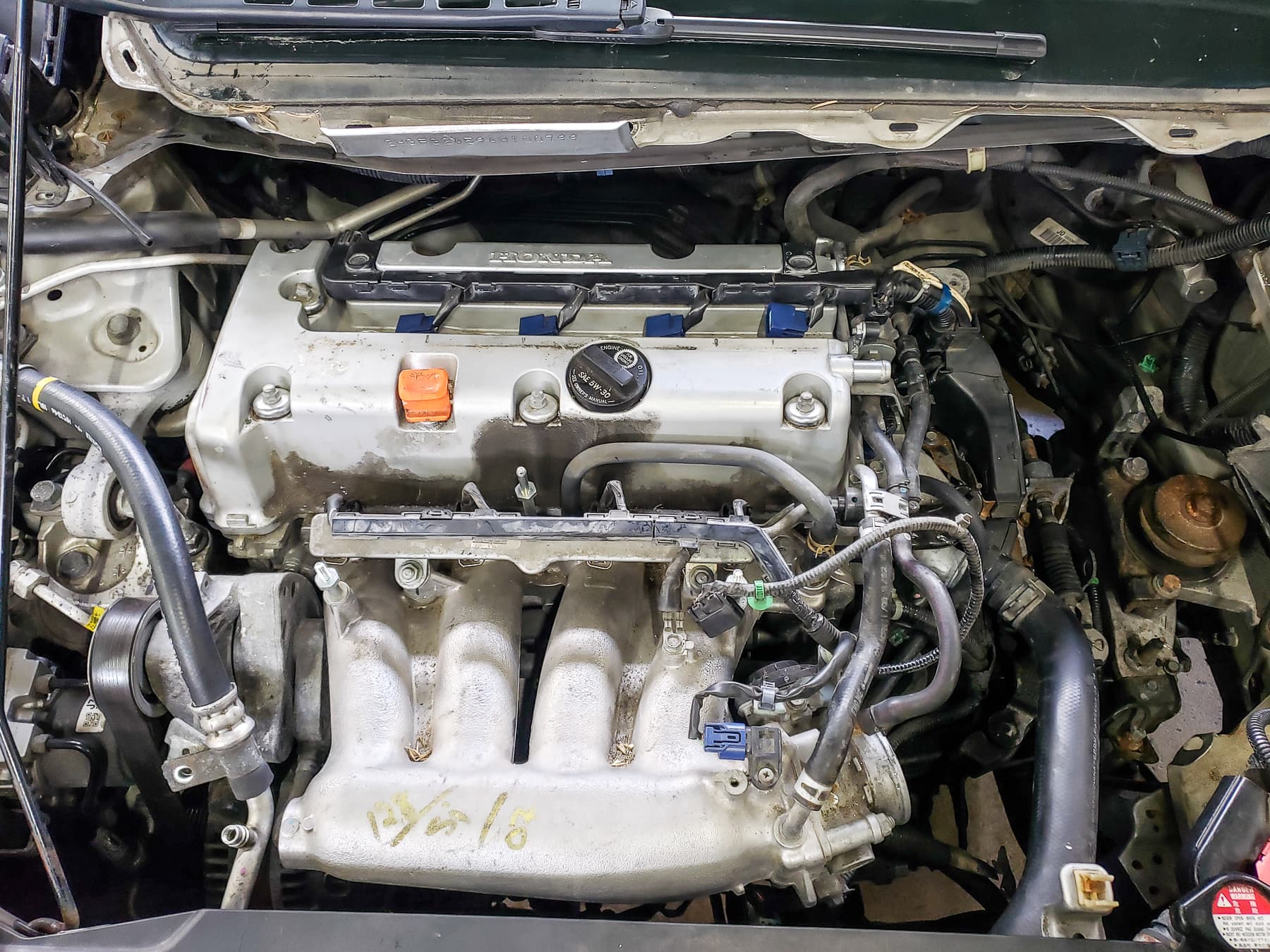 Mark: Can I make a speculation? Wouldn't the water have turned to steam instantly too. So it would have even more power to explode the engine apart?

Bernie: Well, it may have, but I think in this case, probably not because it probably drank so much in one suction that it probably just compressed it. But that's a good point, it could. I mean, we actually do combustion chamber cleaning treatments, where we actually suck water into the engine to clean carbon deposits out. It works really well in addition to a combustion cleaner, but we put a very controlled amount of water and very small amount that sucks in. Called hydraulicing, like when it compresses like that. But this, I think it's possible, but I think it probably happens so fast, it was probably cold. Didn't have time to warm up.

Anyways, here's our engine. This is the replacement engine we put in. This is where the air intake system normally bolts up to the engine and the air cleaner box would normally sit in this area, this cold air intake. We'll look at pictures in the second, the pipe comes out here and goes downwards kind of hidden down in this area, into the front bumper. 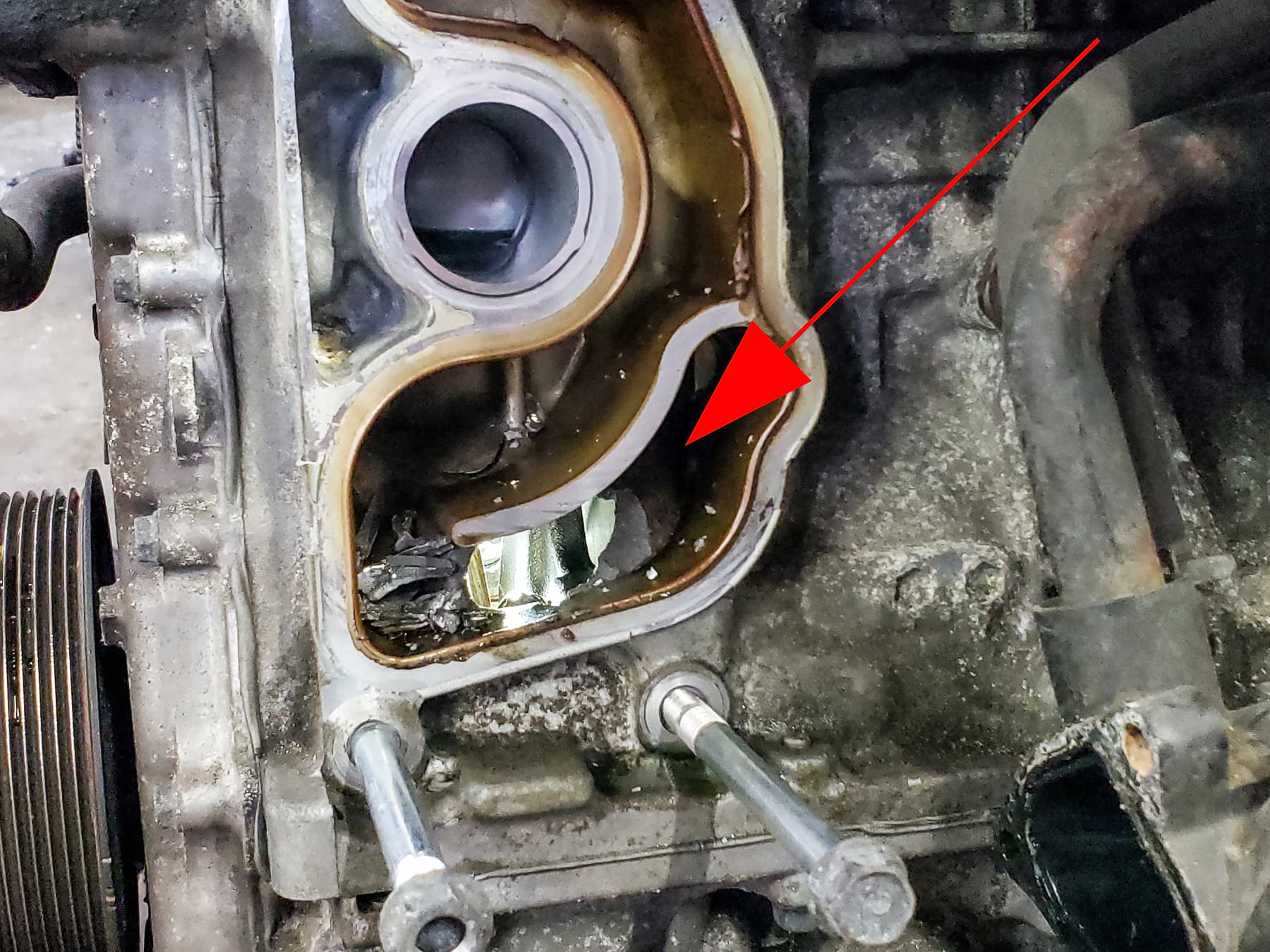 What is here is a very bent, broken connecting rod. And it just flung loose in one second and busted the engine block apart. So that's the kind of thrilling, neat stuff. At some point, we may actually take this engine apart and may have a couple of other pictures to add at a later date to the show notes. 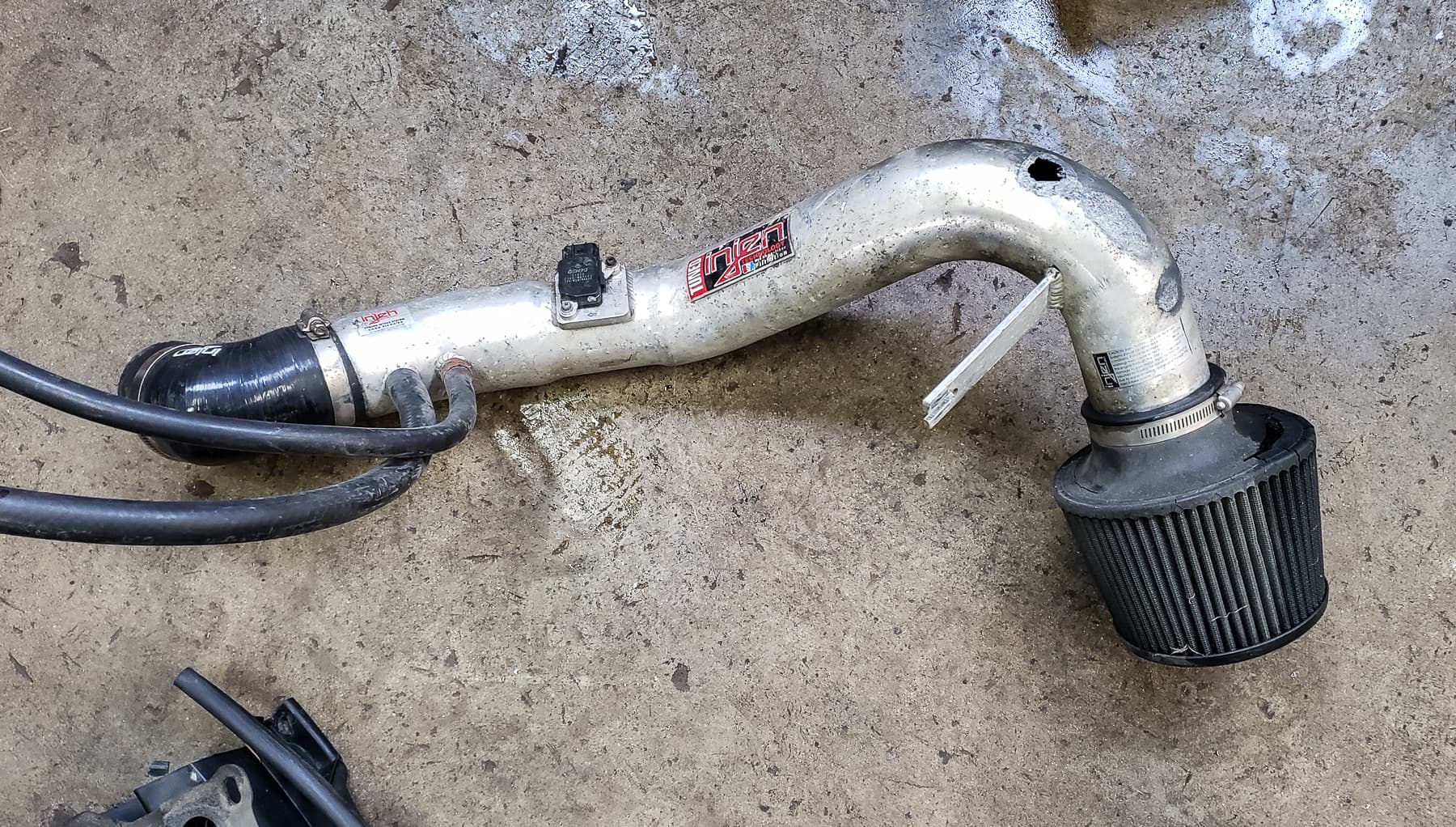 Here's our cold air intake. This is the culprit for the job. There's the K&N style air filter. This is like a reusable air filter. That's supposed to allow a lot of extra air flow and create a humongous, extra amount of horsepower, which is what the selling feature of this is. But you can also notice there's a hole here.

So this intake has been, you know, again, these things don't always fit perfectly. It's been rubbing on the frame of the vehicle. And there's actually an additional hole. So air is being sucked in past the air filter. So that isn't a good thing. I mean, the engine was actually, you know, dirt could have been sucked into this engine and it probably was for a time. 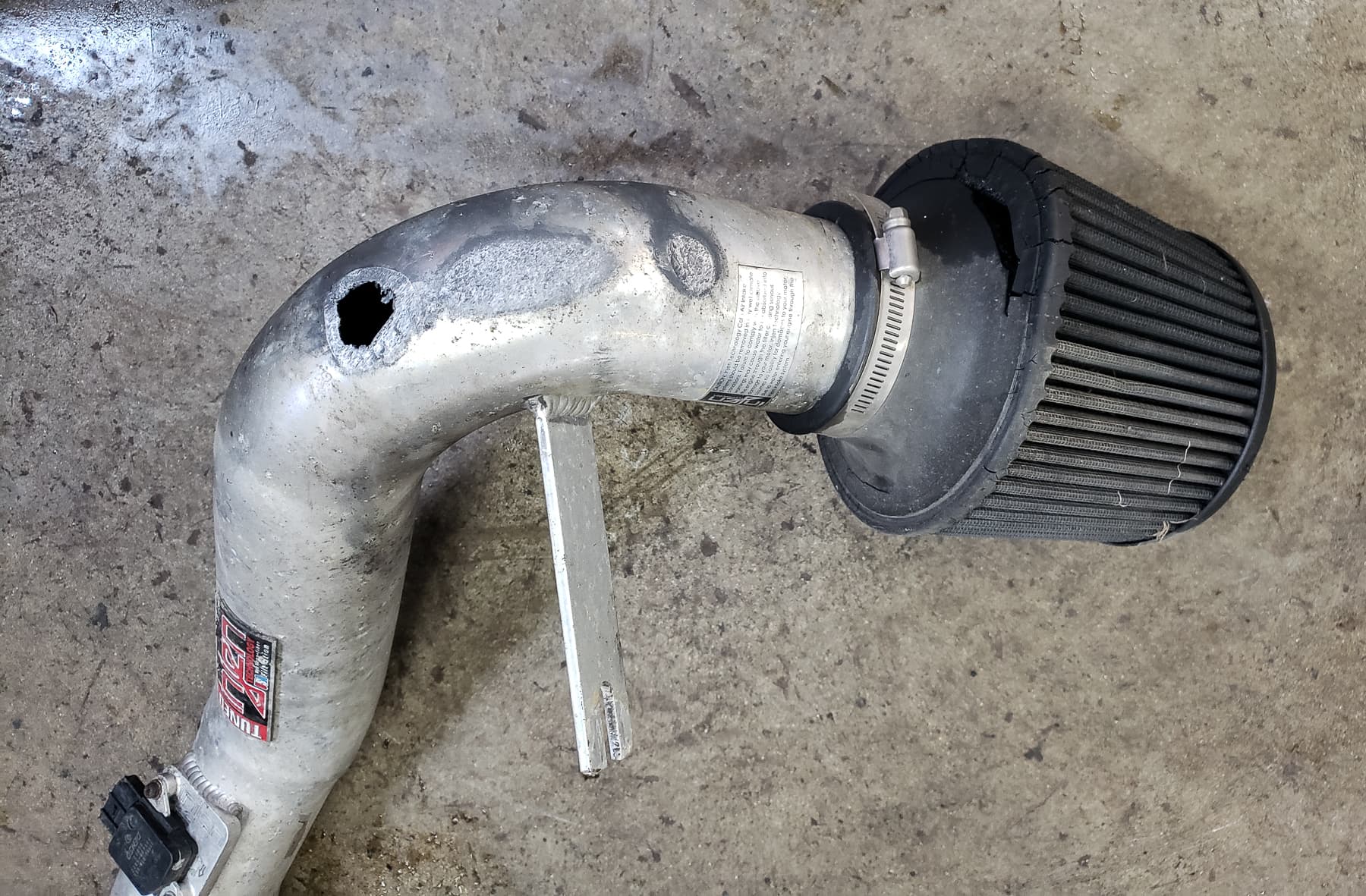 And there's a closer view of the hole in the air intake. Also, this filter is broken too, which probably wasn't a result of the puddle. It probably just, again, bad installation. Doesn't fit properly. Air filter broken. So this engine was probably doomed over time. So that's our picture show.

Mark: So let's discuss cold air intakes. This was a poor installation, but are they worth even putting into a vehicle?

Bernie: I don't think so. I mean, they're supposedly we'll give you a couple of extra horsepower and I don't know what it is. I mean, the manufacturers are going to claim it does a lot more than I think you're going to find in the real world.

It makes a nice sucking sound. If you're interested in that kind of thing. Personally, I prefer engines that don't make much noise other than maybe a nicely tuned exhaust, but that's just my own preference. But I just don't really think it's worth putting one in. The value is so minimal compared to what you're actually going to get in return. And I mean, then you get a thing like a puddle, which happens a lot around Vancouver. But even if you live in Arizona, I mean, they get flash floods and rains and you might be stuck out there. And all of a sudden your air intake sucks in water that wrecks your engine.

Now the owner of this vehicle has actually providing us a new air intake which is mounted higher up, which is smart at the very least. But there is an advantage to cold air being sucked into the engine. It is denser and it does provide more power if you really want that. There are ways you could do it, but it's not going to be cheap. You're going to have to do plumbing. You're going to have to have drainage in it. And you know, there are things that need to be done. But I would not advise, you know, save your money.

If you have to do it, put a K&N air filter in the factory air filter box. It might give you a one extra horsepower out of 200, you know, make you feel good about it. Other than that, I just wouldn't waste my money.

Mark: Let's talk for a second about, you know, what about as a buyer of a used vehicle? Would you ever buy a vehicle, but would you recommend buying a vehicle that's been modified in any way?

So usually, if it's stock and factory, it's going to be used less, not as hard theoretically better maintained. And when you have this cold air intake and you think, well, I don't really want to have this. I don't want to take the risk. You're gonna have to spend a bunch of money to get the factory intake system back into the vehicle.

So I think it's a stroke against the vehicle. I mean, there are other modifications that people do that are sometimes there's no negative to it, but you know, to me, that's always a bit of a red flag. At least a yellow flag.

Mark: And probably if you notice that, then you probably want to make sure you get a very thorough vehicle inspection, even though that's not going to guarantee that you know, how long this vehicle is going to last. It's still a good idea to make sure it's done right and properly. And that the vehicle's safe after these modifications.

Bernie: Exactly. And you know, the thing about buying a used vehicle is, there's always a gamble. There's stuff we can see. We can do a really thorough inspection. We can look at things and go, okay, this is what we see, but it doesn't mean that things aren't worn to the point where it's okay today. But in a week or two or a month or a year, some problem is going to show up from the modifications or maintenance. A vehicle inspection now it's like a photograph. It's just a snapshot of what is right now.

Mark: If you're looking for a vehicle and you need an inspection the guys to see are Pawlik Automotive. Or you've got some issues with some modifications that maybe you did and you want to reverse, or who knows, you just need a reliable place where they're going to tell you the truth about your vehicle and get it fixed right the first time. Pawlik Automotive. You can check out the website, pawlikautomotive.com. You can book on there as well. Or you can book through giving them a call 604-327-7112 in Vancouver, British Columbia. They'll get you looked after. Again, 24 time winners of best auto repair in Vancouver. And we really appreciate you watching. Thanks, Bernie.