Mark: Hi, it's Mark from Top Local. I'm here with Bernie Pawlik, Pawlik Automotive in Vancouver. Vancouver's best auto service experience. 21 time winners of best auto repair in Vancouver as voted by their customers. And we're talking cars. How are you doing Bernie?

Mark: So happy new year, we're going to talk about a 2010 Honda Crosstour that had an alternator problem. What was going on with this vehicle?

Bernie: Yeah, so the vehicle came to our shop the owner's complaint was the battery had gone weak and the car was hard to start. So that was his main complaint, not the alternator, but the battery was weak.

Mark: And what testing did you do to find what the problem was?

Bernie: Well, the first test we do is called an AVR test, which is basically an alternator voltage regulator test, is what that stands for, but it  includes testing the battery, of course, which is a kind of heart of the vehicle's electrical system. So we test the battery, test the alternator voltage regulator, starter draw, and a number of different things.

And we found that the battery was weak and needed to be replaced, but also the alternator had blown diodes. Our tester will actually single out some components inside the alternator that are bad. So in this case, it said the diodes were bad and that'll cause a very low voltage signal and erratic voltage getting to the battery.

Mark: So I think I remember replacing diodes in an alternative. Couldn't you just replace the diodes?

Bernie: Well, you could, but it's kind of a specialty repair. It's not something we get into at our shop and really most, unless you're an auto electrical specialist that rebuilds alternators and starters, you really, people don't really get into doing them. Like, to be honest, I've never even done them myself. Yeah, I've changed voltage regulators on alternators when they used to be doable on some, but not diodes. It's kind of a specialty type of thing. I mean, not rocket science, but even getting the parts is tricky. They're not the kind of thing you find in a normal auto parts store. You have to source them out.

So let's just get into some pictures while we're at it. 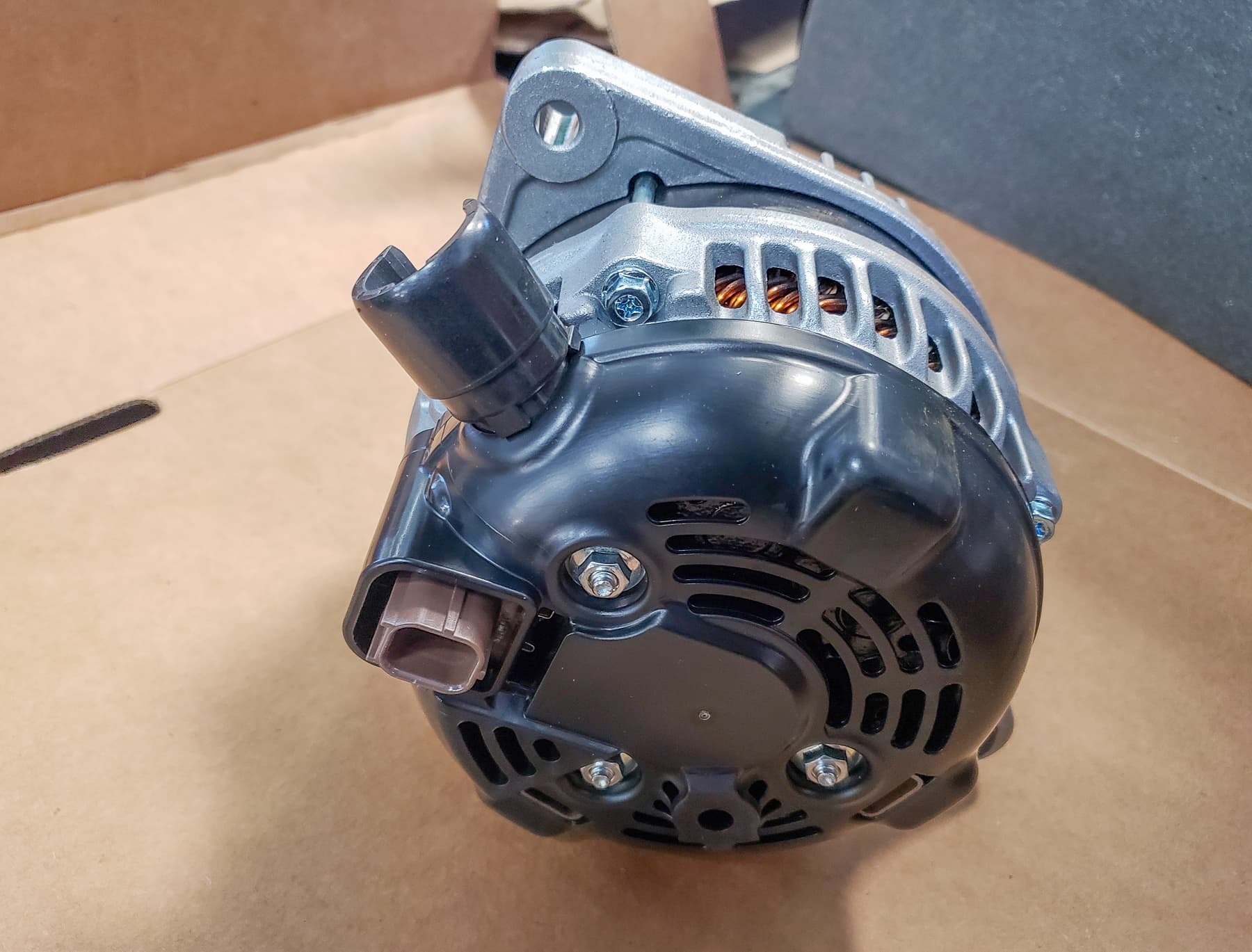 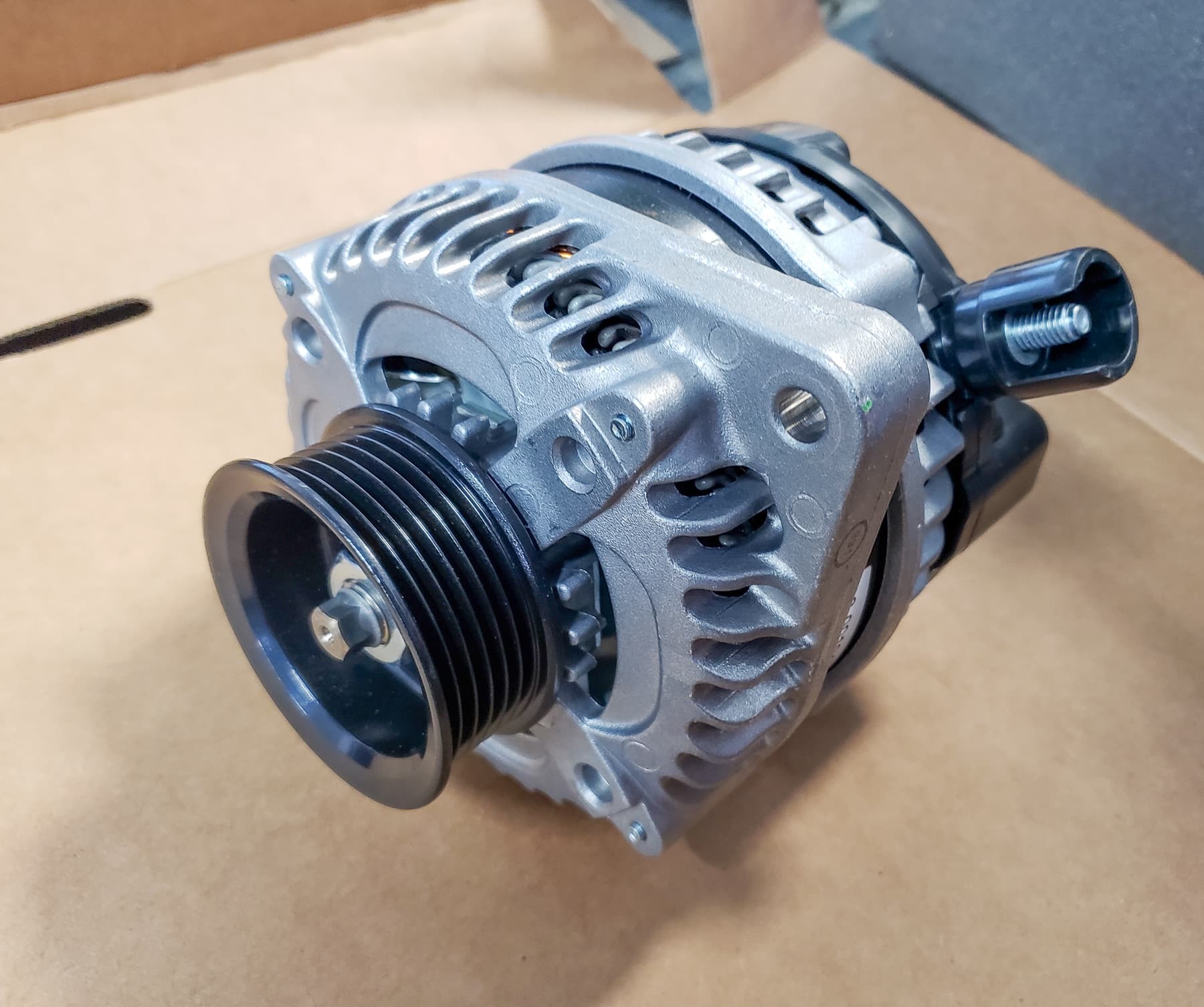 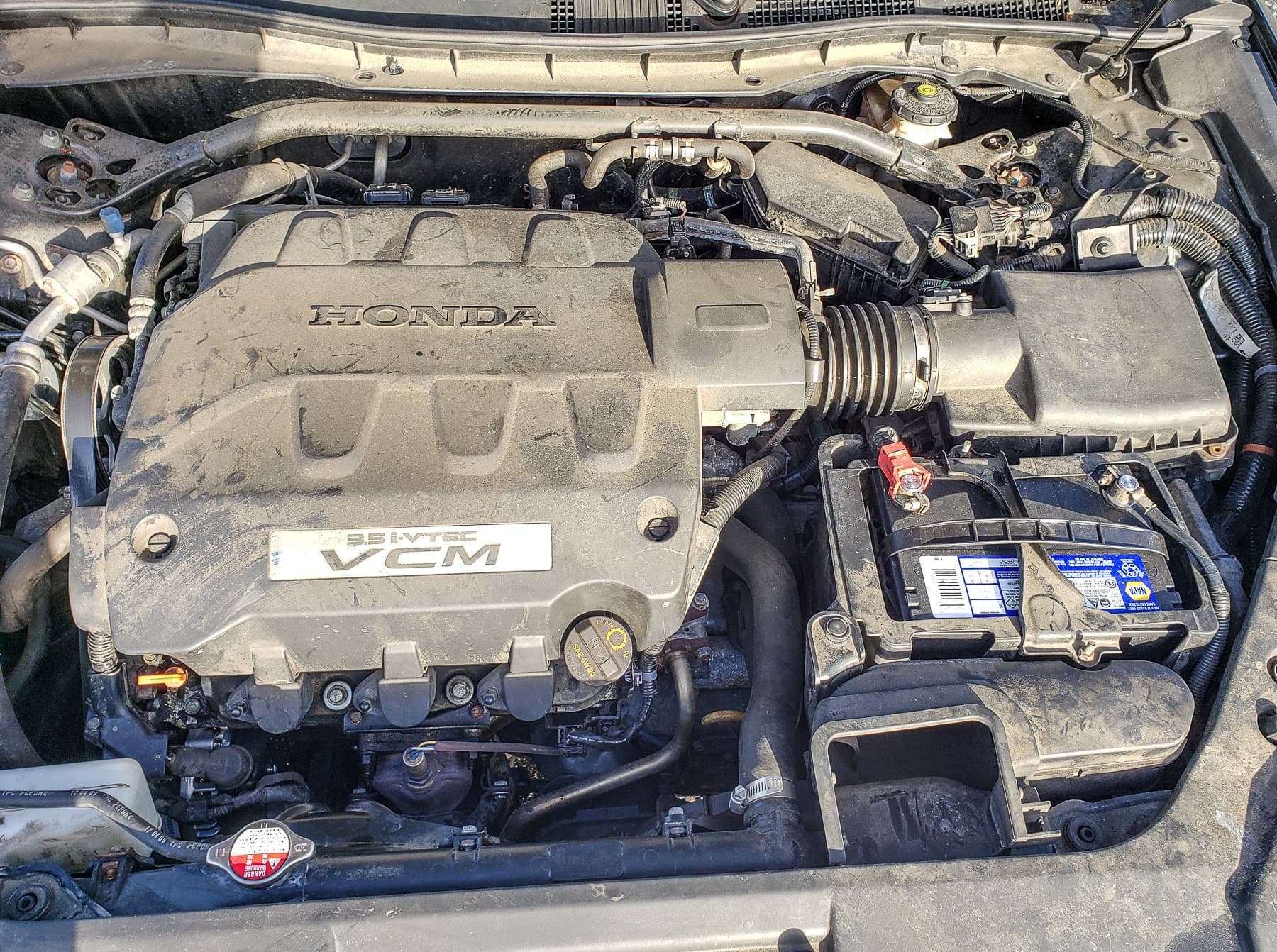 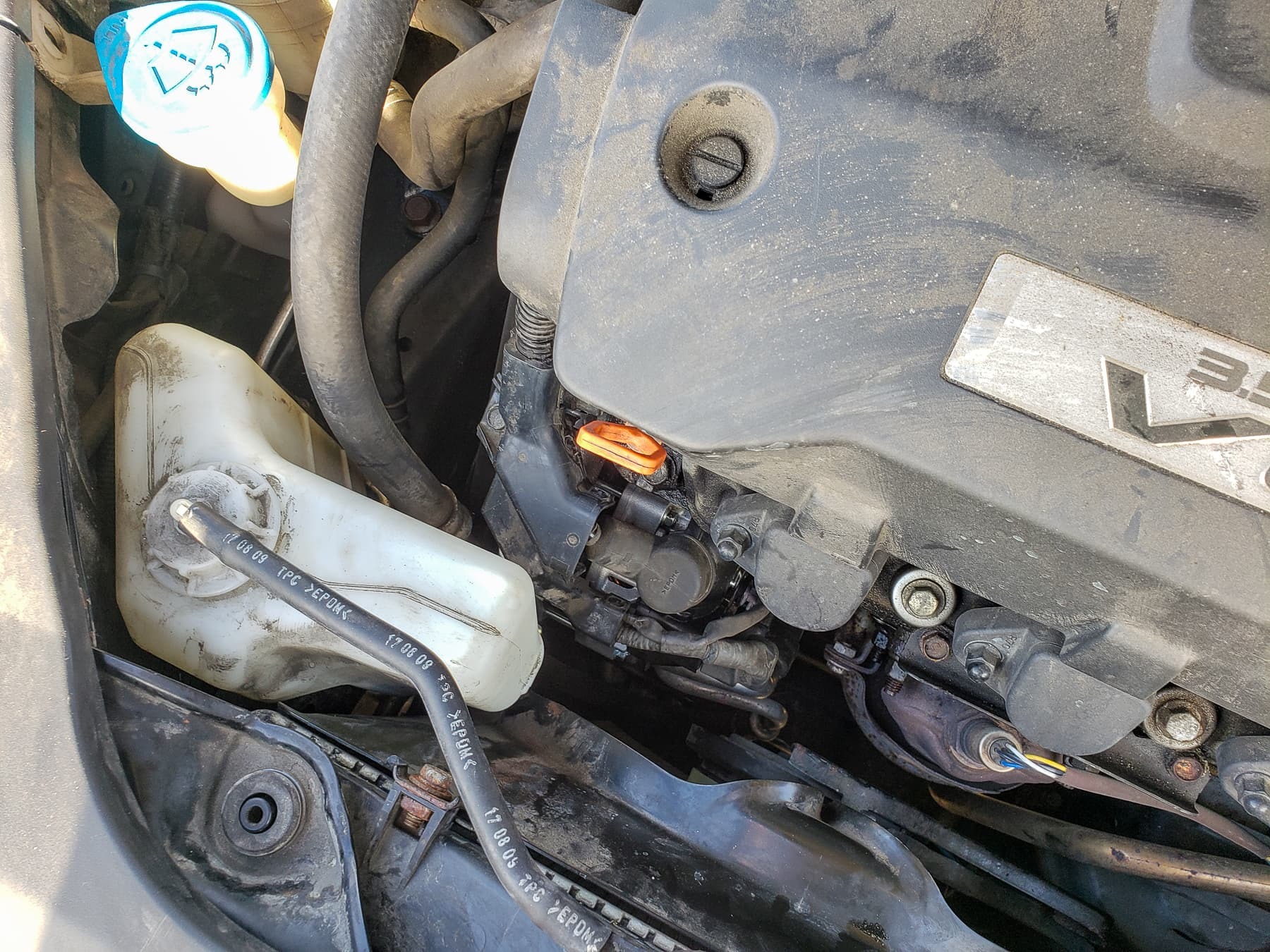 So here's our 2010 Crosstour, which is basically an Accord, little sort of a puffed up Honda Accord, maybe a little SUV. I don't know if you could even call it a compact SUV, but it's a little, kind of a puffed up type Accord.

Here's our alternator. This is the replacement alternator we put in. The diodes sit behind this cover. And there's quite a few items that need to be removed to actually access the diode pack. There's a front view, pulley main power terminal. And there's basically two electrical connectors on an alternator. There is also this one here, which does the field and a few other items.

This normally connects to the computer and some voltage battery and ground signals. That's basically a view of the alternator location. Of course, here's the engine compartment. As I mentioned, it's like basically a V6 Accord type model with a 3.5 litre engine.

There's our new battery installed and the alternator sits down in this area of the vehicle here, buried. A little bit of work to get it in and out. There's another closer view. This is the backside of the alternator. Way down in there. So it kind of gives a view. I've got a couple of other pictures I want to talk about in a minute, but we'll just get back to talking.

Mark: So that after that, of course it's basically good as new and will last another 10 years.

Bernie: Well, you would hope. We would hope it lasts another 10 years. But one thing about alternators is normally when you buy them, they're never brand new. Although there are some offered as brand new nowadays. There's been more new starters on the market available, but what I, not to slam Chinese, but they're cheaply Chinese manufactured a lot of them. And they're really what I've found over time is it's better to just most of the time, unless it's an actual OEM component, it's better to replace it with a rebuilt. But rebuilds don't tend to last as long as originals. You know, they replaced the diodes if necessary. And in this case, of course, when the old one is sent back, they'll put new diodes in. They've changed bearings and brushes and things, common wear out parts, but certain items, unless there is a common failure part, they won't replace them.

So sometimes over time, you know, after a few years of use, the alternator will fail again. But normally we buy good quality rebuilds and have a good, long warranty on them to keep a good long life. But it may not last for 10 more years, we hope.

Mark: So, is there anything that an owner can do to maximize the life of their alternator?

Bernie: Well, there's a couple of things. One is to always make sure you have a good battery in your vehicle. If your battery gets weak and we, you know, part of our B service or comprehensive inspections, we test vehicle batteries on most cars, unless it's a European car with a very hard to access battery.

But in most cars, we test the battery and if it shows signs of being weak, it's best to replace it. Even if the car starts fine, because that really taxes your alternator. So those are the kinds of things as a car owner, if you have your battery tested, it's on an annual basis, and it shows any sign of weakness, it's better to replace it beforehand that'll put less strain on the alternator. And last longer.

Of course, if you're jumping someone else's vehicle like boosting someone with a dead battery, make sure you hook the cables up properly. Your cars running you know, in case if you hook things up backwards, you could damage the alternator. It's possible. There, there are some protective fuse links that'll prevent problems like that happening. But if you do, you know, if you hook a battery up backwards or something if you're changing it yourself, you can create some problems. But those are rare exceptions.

Mark: So alternators has been around for, I dunno, 60. Yeah, 60 years since they were placed generators, how did they change in that extended lifetime?

Bernie: Well, they've got a lot more compact. If you look at a car, say from the sixties, the alternators were quite large, probably six or seven inches in diameter. A lot of them are like four inches now, much smaller. And the other thing is in the olden days, they had a separated voltage regulator. Then sort of the next phase of development was that the voltage regulator is built into the alternator. And now a lot of them, while they may have a voltage regulator built in, there's also a computer control. So it'll switch the alternator on and off on demand, which improves fuel economy, efficiency, power.

If you're, if you happen to be blasting up a hill and you don't really need to be charging your battery, but there needs to be more power to the engine, it'll cut the alternator and then you have more power and then it can just switch it back on again. So there's all sorts of little things that that can be done with computer controls. So that's kind of the biggest thing.

And then of course, if you start getting into hybrid vehicles, the alternators on a lot of vehicles are built into the motor generator. So it's all changed. But compactness is certainly the key for sure.

Mark: So how are Honda Crosstours, this is a fairly, not that long of a model year run. How are they for reliability?

Bernie: They're great. And they're basically the same as an Accord and yeah, very good vehicle. I would highly recommend it. I did want to actually just make one more comment on something too. It's just part of the service on these things, for many years, a lot of cars have when you disconnect the battery, you have to enter a radio code.

It's like an antitheft procedure. And I started thinking about this car, it's kind of annoying because most vehicles, the radios have become integrated into the dash. So it's not like the olden days where if you stole a radio out of a certain vehicle Volkswagen Cabriolets used to be very popular because you can cut the roof, take out this nice Blaupunkt radio and stick it in any, sell it, or stick it in any car you liked. 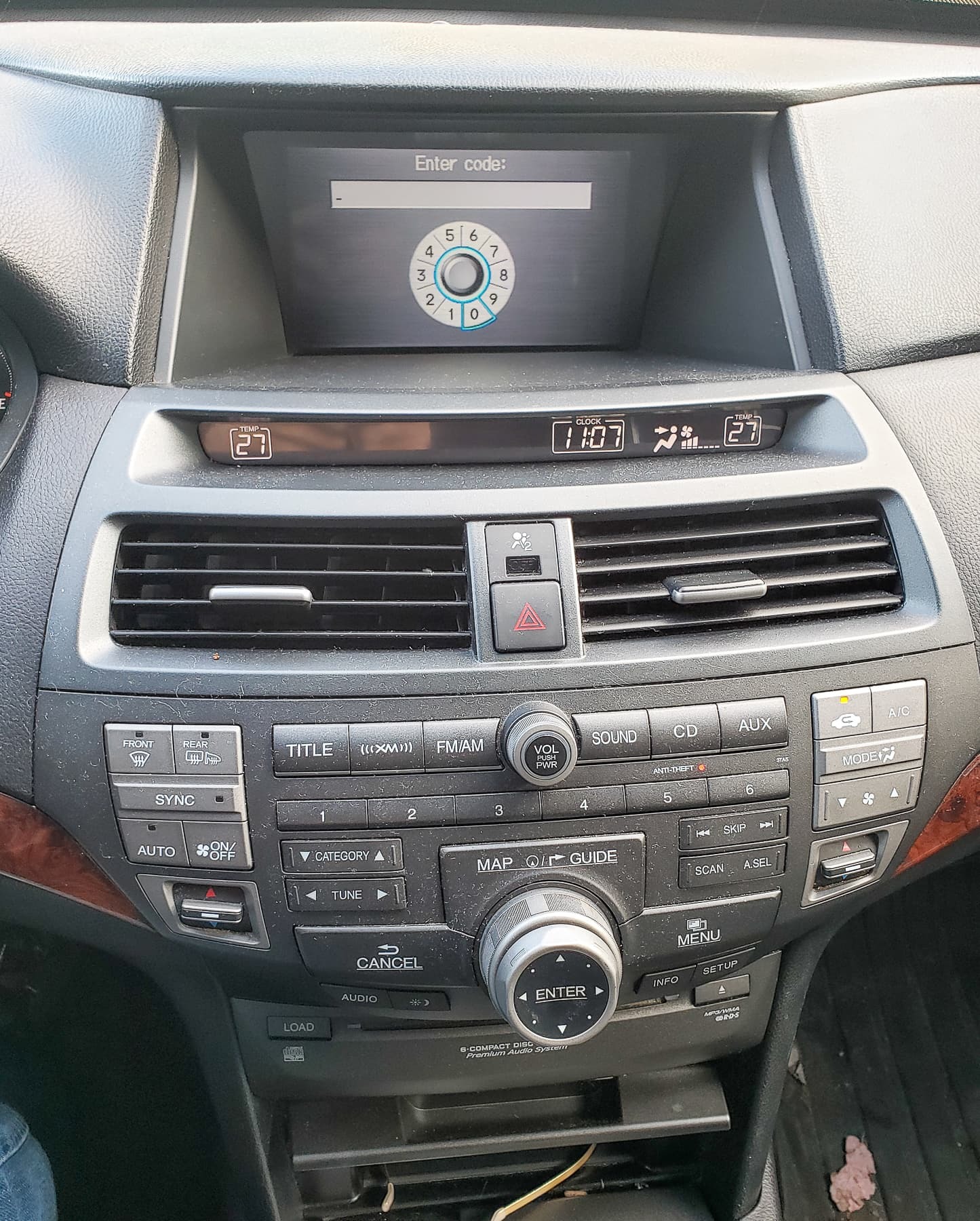 It was a good thing to do, but nowadays they've gone away from that. But it's interesting with Honda, I'll just do one more picture share before we go. As we, if do we fix the radio, of course, there's a code and you have to find these codes and enter them into the vehicle.

It doesn't take a long time, but it can be frustrating in service to find the radio code. So this one, you have to enter a radio and navigation system code to get everything operational. Now, I don't know why they do that because who's going to steal this radio. I mean, where else are you going to put it, but in another Honda Crosstour and people just don't do that. So that's my little rant for the day.

Mark:  If you're looking for service for your Honda in Vancouver, the guys to see Pawlik Automotive, you can reach them at (604) 327-7112 in Vancouver, BC, Canada. You have to call and book ahead. They're busy even now, even in the middle of a pandemic, they're still busy. So call ahead and book or check out the website. Pawlikautomotive.com. Hundreds of videos, articles on there over the last eight plus years. Our YouTube channel Pawlik Auto Repair, same thing. And of course thank you for watching and listening to the podcast. We truly appreciate it. Thank you, Bernie.