Mark: So today's victim is a 2010 Hyundai Genesis. Genesis has become its own company now hasn't it? It's separate. So this is before that. Before that. And this is an oil burning issue, what was going on with this Hyundai?

Bernie: Yeah. So this vehicle came to our shop. The owner was concerned because there was a lot of blue smoke coming out the tailpipes. And I mean, a lot. You and I have been around for a long time, when we remember there was cars that burned oil and smoked and driving down the road. It wasn't really an uncommon issue, but now, you know, to see a car smoking, when it drives down the road is pretty rare. It's like, oh wow. Look at that. Not in a good way, of course. But this thing was like just huffing the blue smoke out the back. Really serious issue. And, you know, thought, okay, there's something major going on with this car.

Mark: So how do you go about determining what the cause is of this blue vaping happening?

Bernie: This blue vaping. Yeah, so an internal combustion engine can basically burn oil in a few different ways. One is the piston rings can fail. The other area is the valve seals or valve guides will fail and that'll cause excess oil to get into the combustion chamber. The other third common item is the crank case ventilation system. Not all vehicles, but some, you know, the way they're designed, they'll start sucking oil into the intake system and start burning oil. And this is a turbocharge engine, so the fourth thing on a turbocharger is there could be a failure in the turbocharger, that will cause excess oil to get into the exhaust system and burn oil out of that. So those are kind of like the four ways on a turbocharged engine engine you'd you'd find a leak. So our task of course is to determine, okay, which of those items is it?

Mark: So, how do you go about isolating which one, troubleshooting down to which one it is?

Bernie: Yeah, so there's a couple ways to eliminate a few things, like for the crank case ventilation or breather system and even like piston rings, it just popping the oil cap off with the engine running is a good telltale sign.

For instance, if you pop the oil cap off with the engine running, all of a sudden is a huge suction release, then, you know, generally that the crank case ventilation system is, something's blown in there and it's sucking too much vacuum through the crank case. So that's usually a telltale sign of that.

If there's a lot of sort of smoke inside the crank case, it's puffing, there's a bit of pressure kind of, kind of it's my best description. You know, that then that, that can indicate that the piston rings are blown and there's too much crank case blow by. So that's another way. Things like valve guides and valve seals are definitely trickier. And sometimes it's engine specific. Some engines have problems where they'll actually drop valve guides. I can't think of an engine that's had that in a while, but issues where the valve guides will drop out and then they'll just be like a jet of oil pouring into a specific cylinder.

From there you can pull spark plugs out and go, okay, that's the one cuz you can tell by the spark plug. So in the case of this engine and of course with the turbo, that's a little trickier, we did actually notice the flange that was coming out of the turbocharger, there was actually some oil seeping out from that flange. That's how bad the oil consumption was on this one. And we figured the next step in the process would be to remove the turbocharger from the exhaust manifold, which you can do on this car. And just look inside the manifold and see, is there oil coming out of, you know, there would obviously be a trail of oil coming out in the different ports or is it maybe coming from the turbocharger.

So we proceeded to take that out and found that the ports were all dry and the end of the turbocharger on the exhaust side was just completely soaked in oil. So problem found.

Mark: What was involved in the repairs then?

Bernie: Yeah. Well, let's look at some pictures. So there's our nice looking Genesis. I always like to look at these cars, you know, I've been around long enough where Hyundais were real pieces of crap and they really have built some pretty nice cars. And this is one of 'em. 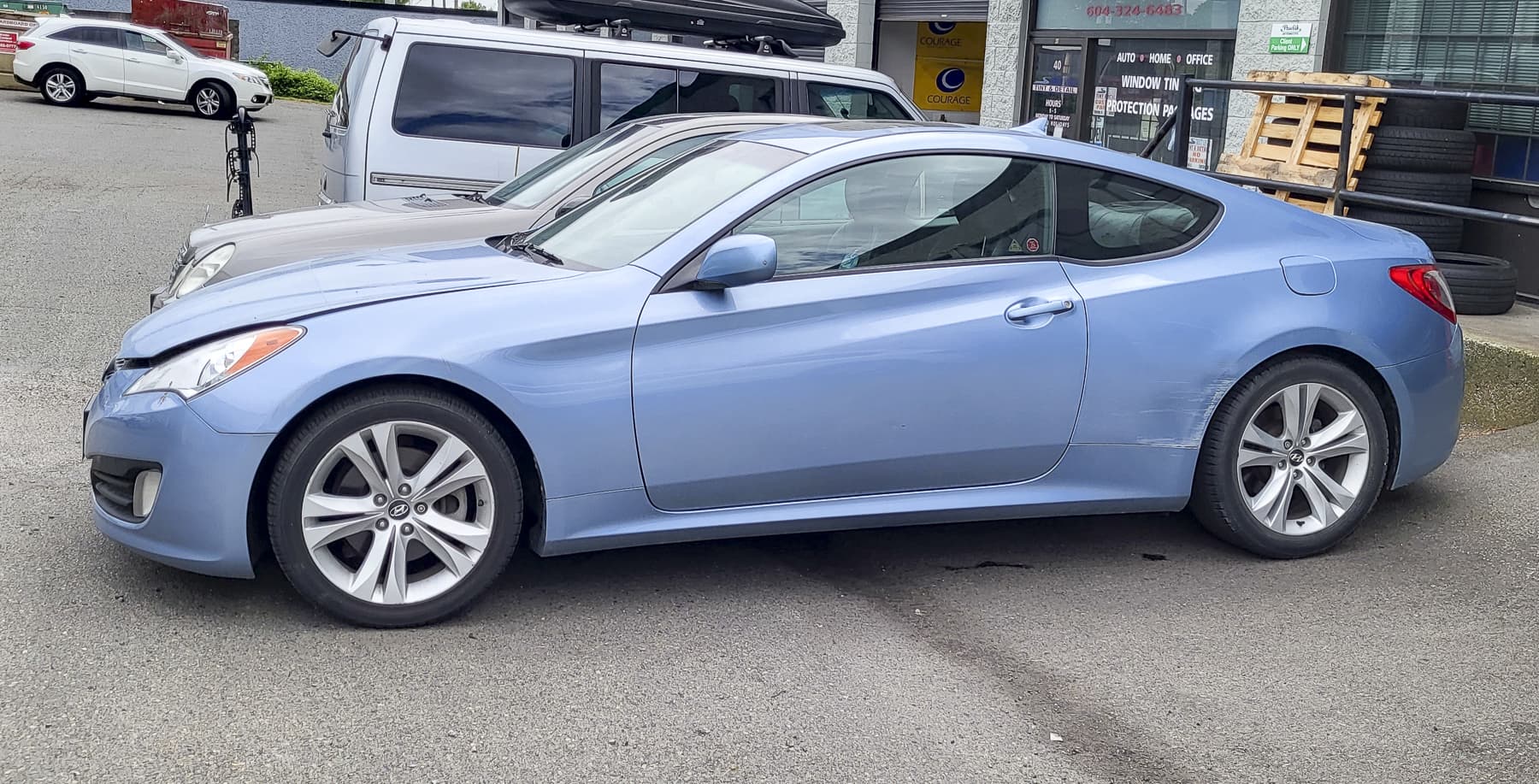 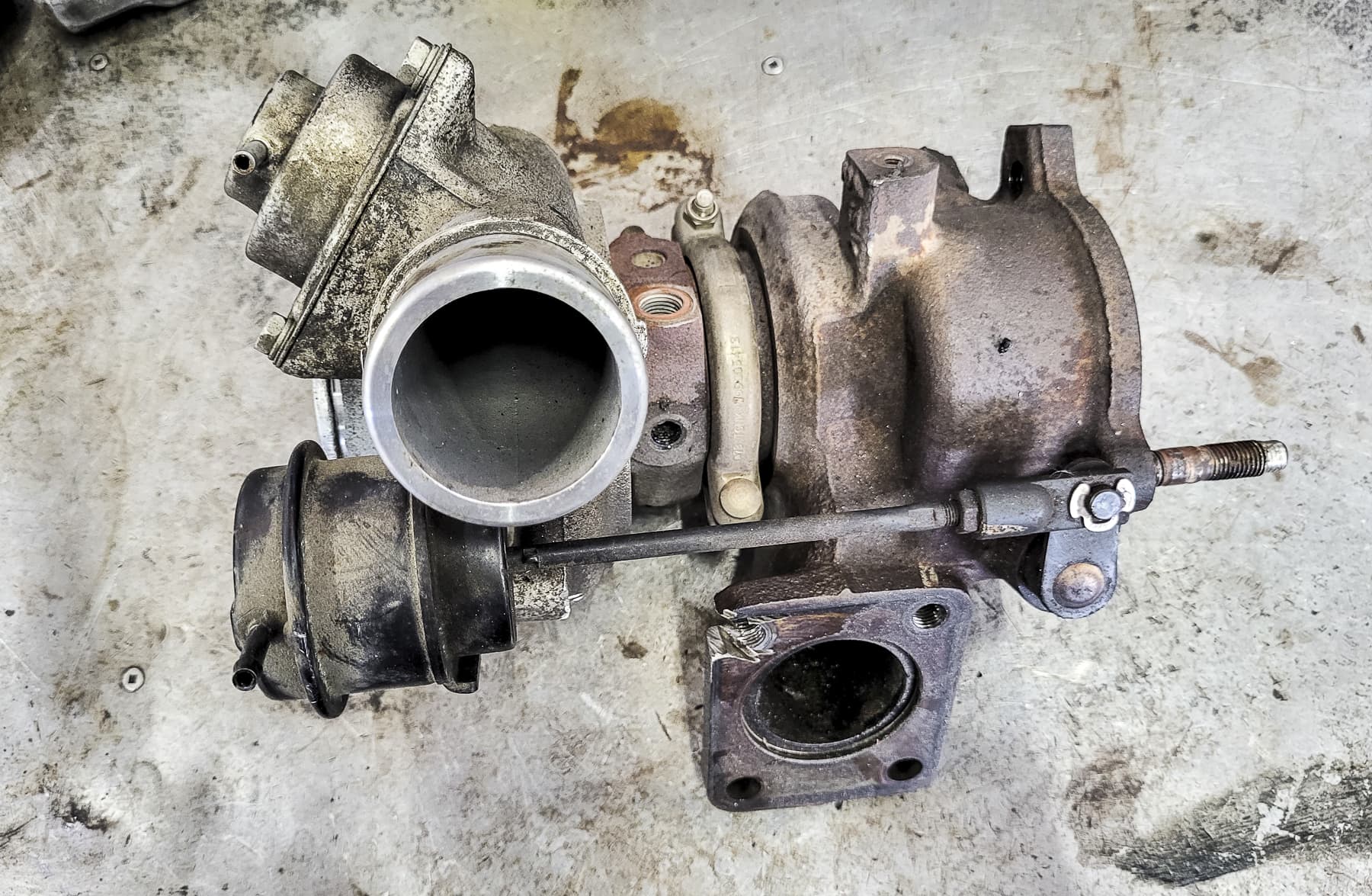 You can see there's no oil here, but if you look at this picture, this is the exhaust side of the turbo. You can see it's black, kind of shiny black. This is actual liquid oil sitting in here where the red arrow is pointing. And a couple of these other items, the yellow arrow, this points at the actual turbine blade. We're gonna look at a cool video in a second is just to see how badly worn this is. 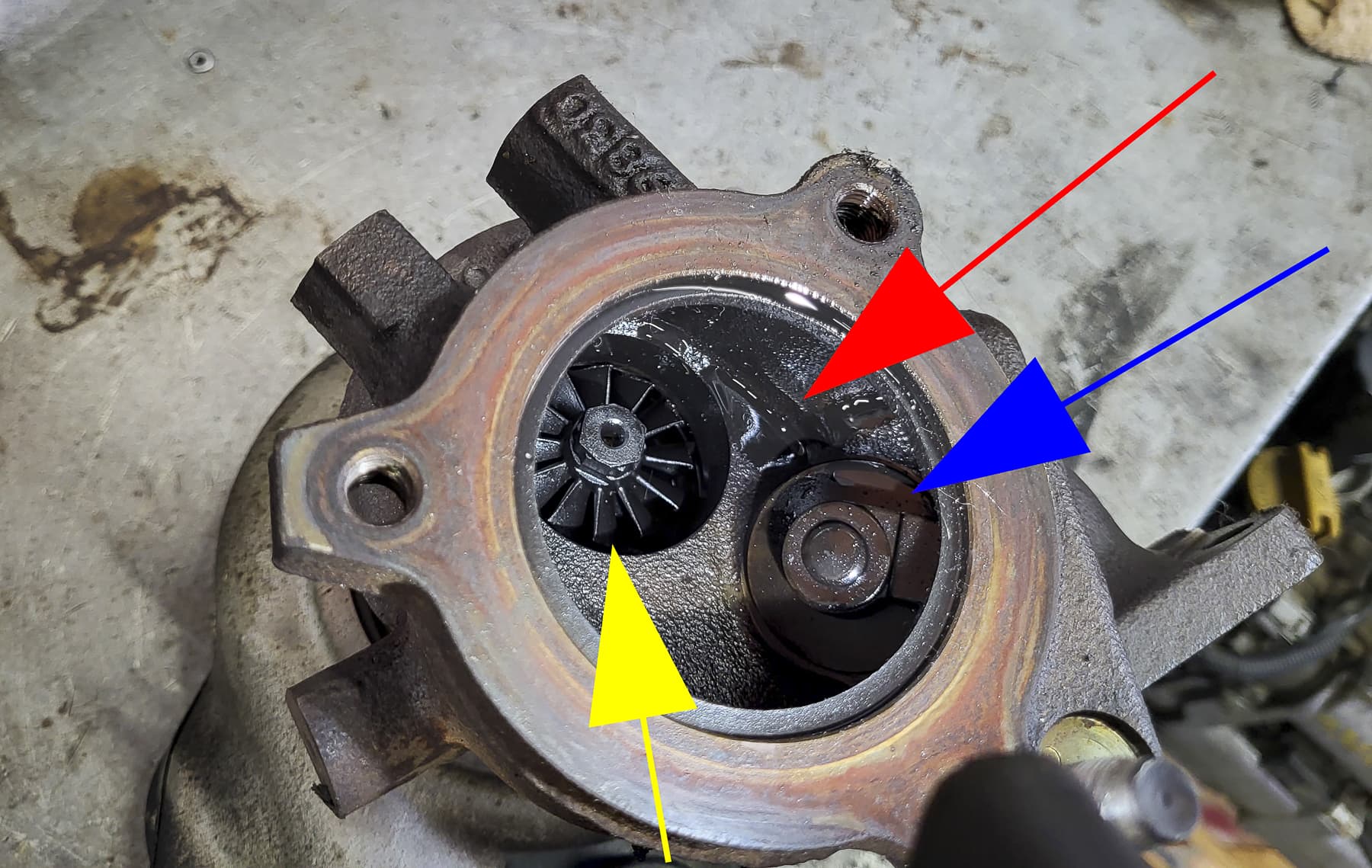 So the video, this is kind of the fun part. So just watch where my finger is. My God. Yeah, pretty bad, eh. So there should not be any movement like that whatsoever. Maybe if you had a dial indicator on there, to measure it, there might be a couple thousands of an inch, but not quarter or half inch movements. So there's our picture show for the day.

Mark: I'm surprised at how small the turbocharger is.

Bernie: It is. Well, it's a two litre engine, so it doesn't really need a very large turbo. Now, of course you could probably put a much larger one in if you wanted to get more power out of it, but there are things to consider when you do that kind of thing. You know, if you put too much boost, you can blow the engine up. So there are limits. But it is pretty tiny.

Mark: So the repair really was just, you replaced the turbo.

Bernie: We replaced the turbo. Yep. And that that took care of it. That fixed it.

Mark: And how did the car run afterwards?

Bernie: Good. You know, one thing that does often happen, as you can imagine, a lot of oil has been pumped out of this turbo into the exhaust system. And so it does take a little while for the smoke to dissipate. In my earlier years of fixing cars, when we'd repair something like this, maybe something like that, or a badly blown head gasket, where it's filled with coolant. It filled the exhaust system full of antifreeze. It's a little discouraging cuz you start it up and it's smoking still and you go, oh no, did I fix it properly? Sometimes it can take like half an hour of driving to get the smoke out. This didn't take too long surprisingly. I should have taken a little video of the smoking exhaust beforehand, but I didn't. But it was pretty bad.

Mark: So when the turbo's that badly worn wouldn't, there have been some kind of indication, like a lack of power or a lot of noise or something other than the smoke pouring out of the back of the car to indicate there was a problem?

Bernie: Yeah. I mean, I would of thought that prior to the turbo failing like this, there probably would've been some noises coming from the turbo before the bearing even got, you know, wore out that bad, badly. That would be another thing, plus I would say absolutely a lack of power, but it might be that the person was so concerned about the smoke coming out the back, they barely, you know, touched the gas, which is probably kind of the case. But yeah, with a turbo shaft like that, it's not gonna spin up properly and boost. So I would say there were some other indications besides that, which the owner never told us.

Mark: So how normal is this kind of wear?

Bernie: Not that common. We don't run into too many turbos that are blown, blown that badly.

Mark: Is there anything that the owner could have done to prevent or get the turbo to last a little longer? Were they changing their oil properly? I guess?

Bernie: Well, probably not. I think the impression we were under and I don't wanna say, you know, if the owner is watching this, if they've done regular oil changes, I apologize. But you know, the impression we were under is that the oil was in pretty bad shape and probably not maintained properly, but I can't say for certain that was the case with this car. But it is really important to change your oil regularly and to exceed the manufacturer's recommendations. Especially with a turbo engine. There's so many things that can, it's a precision component. Clean oil is vital.

There's one other item too, in driving a turbocharged car that many people don't know. And that is if you're driving along the highway, you know, say that one of the turbos work and it's getting really hot. And you decide to pull over you know, say you need to, you know, you wanna get a drink from a gas station or something you decide to pull in really quickly. Don't shut the engine off right away. Let it sit in idle for, you know, a minute to let the let the oil circulate through the turbo and cool it down.

It's very important. That turbo will seize, they can seize up when that happens or you can have excessive wear. So proper heat you know, proper heat management. Yes. Thank you. You know, is vital in terms of turbocharger life.

Mark: And how are these, this era of Hyundais for reliability?

Bernie: Yeah, they're good cars. You know, we rarely see a lot of problems with them. They're really pretty good overall. It's on my recommended car list. Plus, it's a nice looking car too.

Mark: So there you go. If you need some service for your Hyundai in Vancouver, the guys to see are Pawlik Automotive, you can reach them at all the above normal places. And we thank you very much for watching and listening. Thanks Bernie.