Mark: Hi, it's Mark from TLR. I'm here with Bernie Pawlik, Pawlik Automotive in Vancouver, 24 time winners of best auto repair in Vancouver as voted by their customers. And clearly Vancouver's best auto service experience. And we're talking cars. How are you doing Bernie?

Mark: So today's victim is a little bit older, 2010 Smart car that had a valve cover issue. What was going on with this vehicle?

Bernie: And so this vehicle came to our shop for a general look over. It had a few concerns of which we repaired and there was a leaking valve cover gasket, but it wasn't too severe when we looked at it. And based on the cost of the other items that were needed to be repaired, the owner, you know, we sort of made an agreement, hey, let's not fix the valve cover right now we can leave that until a later time. So we did all the other work, left the valve cover gasket alone and went out for a road test and the vehicle wasn't running too well.

Mark: So what happened on your road test?

Mark: So the spark plug tubes were filling up with oil because of the leak from the gasket.

Bernie: Exactly. I'm going to start showing some pictures, but the actual valve cover gasket leak that we saw was due to the external gasket on the outside, but there's also seals on the inside that seal a spark plug tubes from oil getting in. So they're not actually valve cover gasket, but they're part of the whole ceiling system. So here's our cute little 2010 Smart car. It's actually a convertible model too, which is kinda neat. 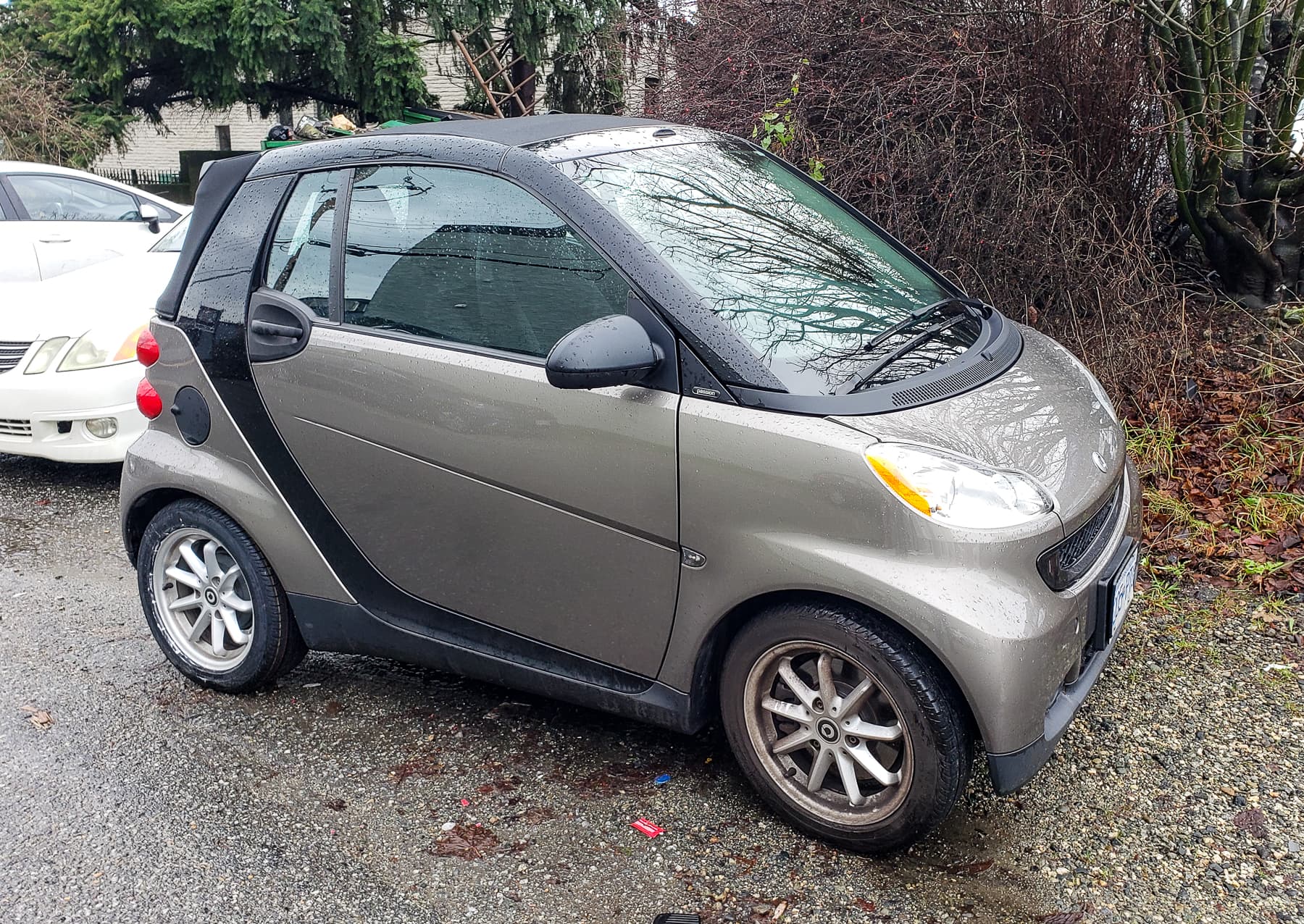 All right. Other pictures. Valve cover. There's the new valve cover. This is where the spark plugs tubes sit. The ignition coils fit down in here and there's a seal that goes in there. Then this prevents oil from getting down the spark plug tubes. So that needed to be replaced as well. 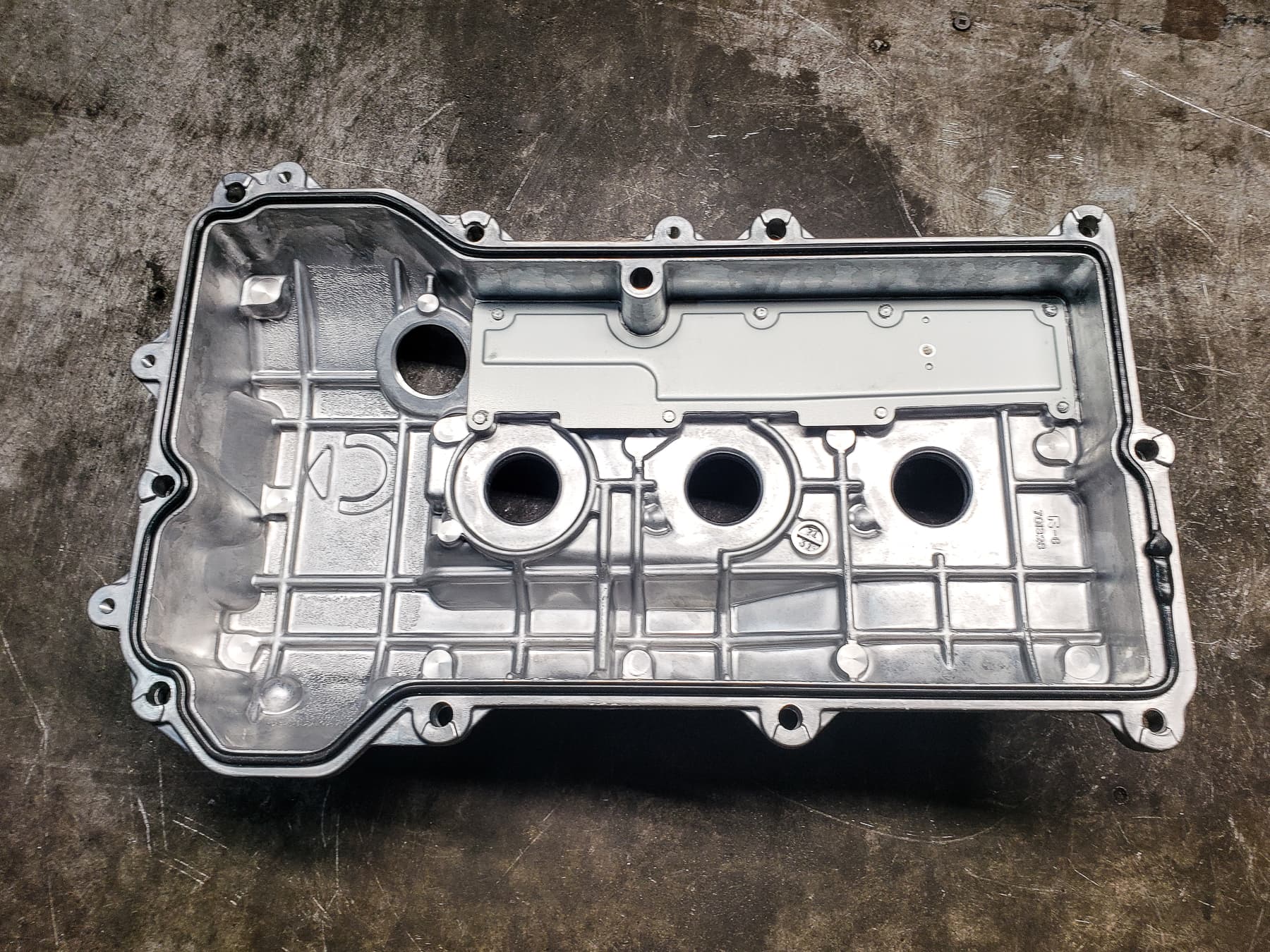 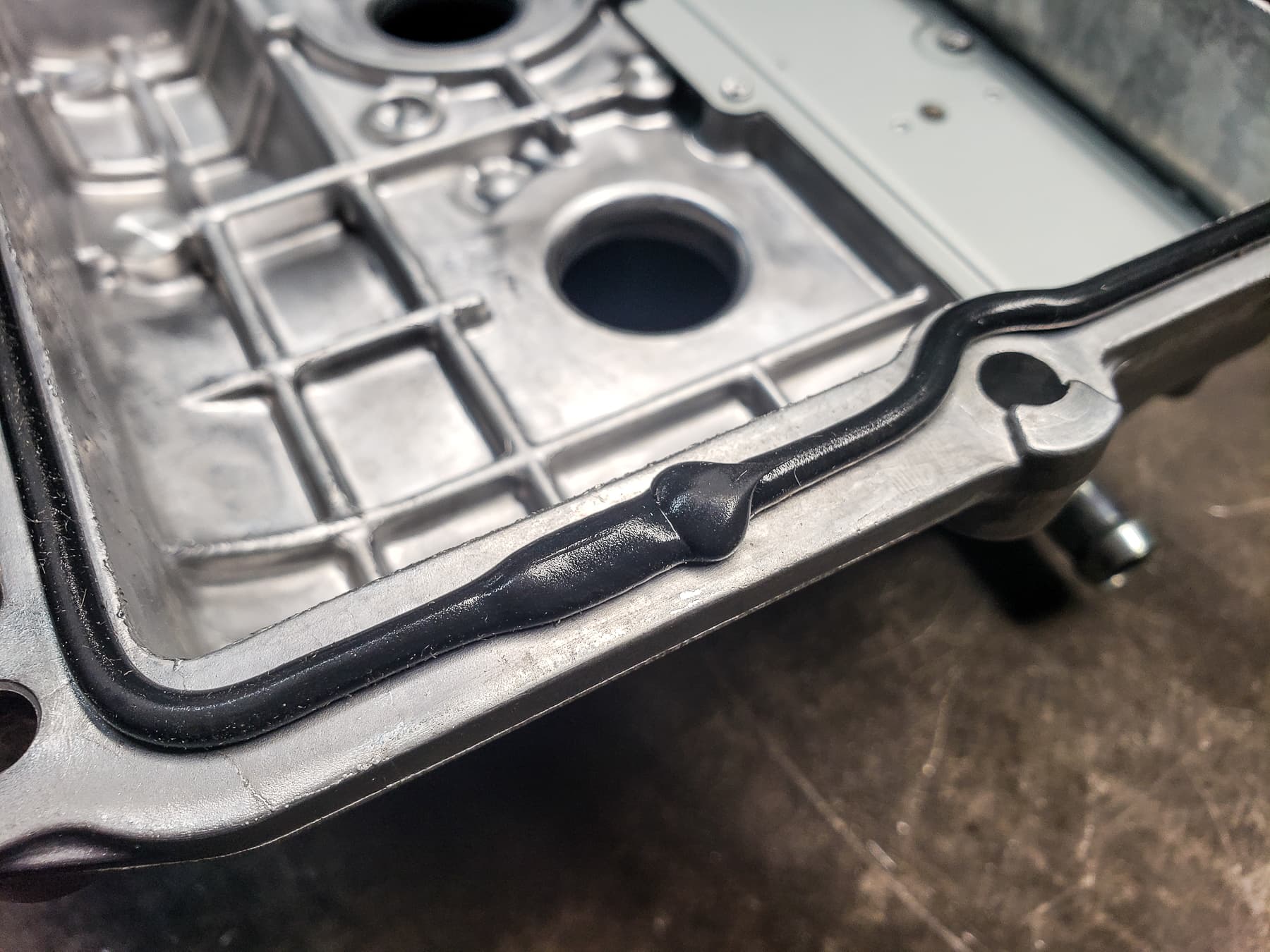 Now you can see the gasket here. We're going to talk a little bit about this. This gasket is molded right onto the valve cover, and we have to replace the whole cover to do this job properly. And I reason I know that is because there's actually companies that sell the valve cover gasket. And so the first time we ever ran into this a few years ago, we just changed the gasket and it started leaking and we got another gasket and it started leaking.

And then we decided to realize, oh, this is a molded type of factory sealer that they put on here. So we decided to do it with silicone and we tried that and it didn't work. And finally ended up after three times having to bite the bullet, buy the valve cover, which is a lot of money and seal it. So why companies sell a gasket when it doesn't really work, I don't know. But we can talk about today a little more. So this is that factory molded gasket. This is hard rubber. It's interesting. This isn't actually quite perfectly formed, but when it all bolts down and it's torqued top, it actually works really well. And it's kind of a, you know, one time use unfortunately. 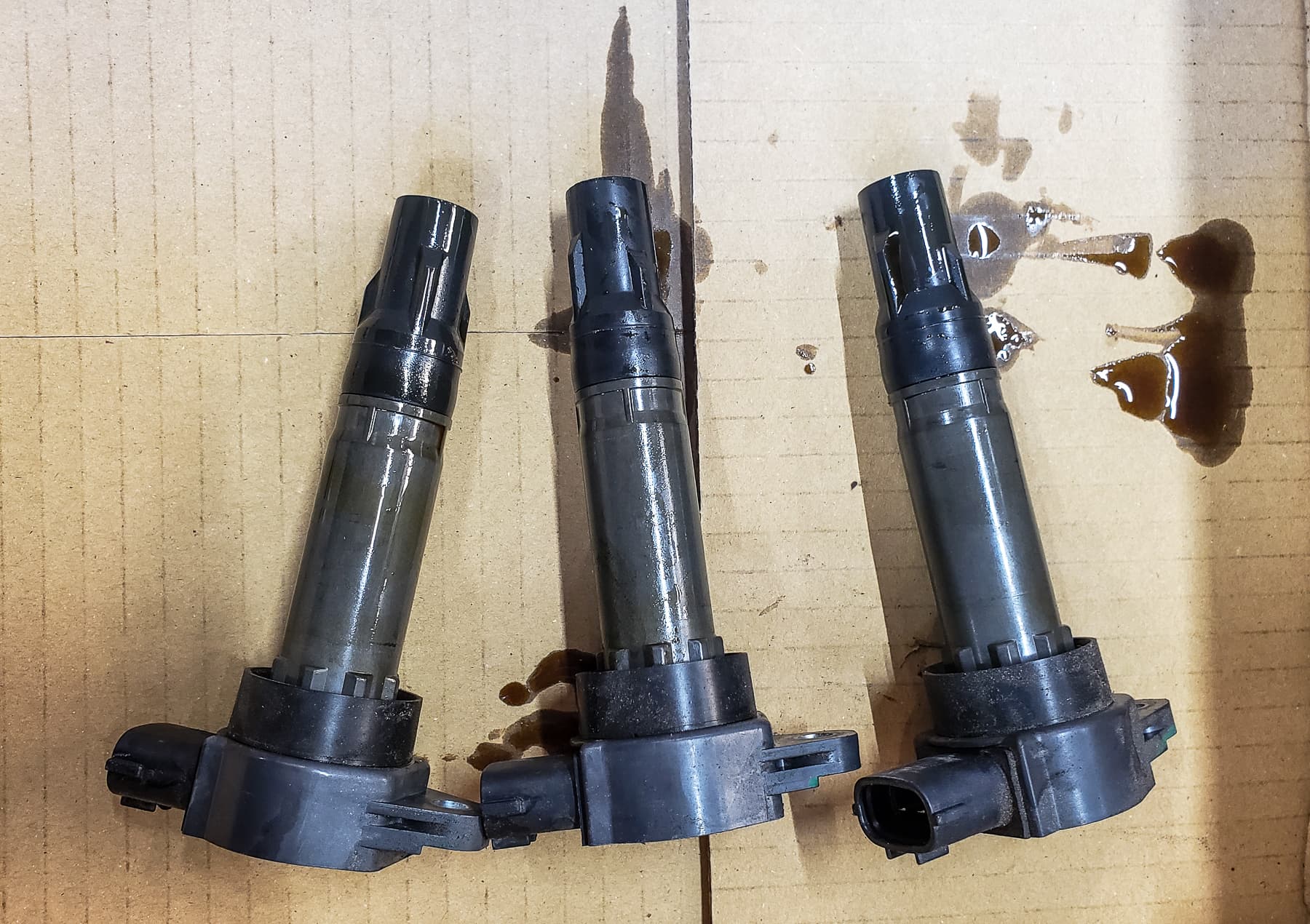 These are our ignition coils and you can see all this oil here on the ignition coils, especially this one here is, well as bad as the other ones. Then what happens is, as the oil starts filling up, it shorts out the spark plug and it won't fire. Now you can see three coils. This is a three cylinder engine. You can imagine if you take one ignition coil out of the picture, you've got only an engine running on two thirds of your spark plugs. Whereas if you have a V8 engine and one quits, you have seven eights of an engine, but this one, you only have two thirds. It's not a lot. And if two were to quit, while you basically have a one third, it doesn't even work. So it's really critical that there's no malfunctions on this type of thing. 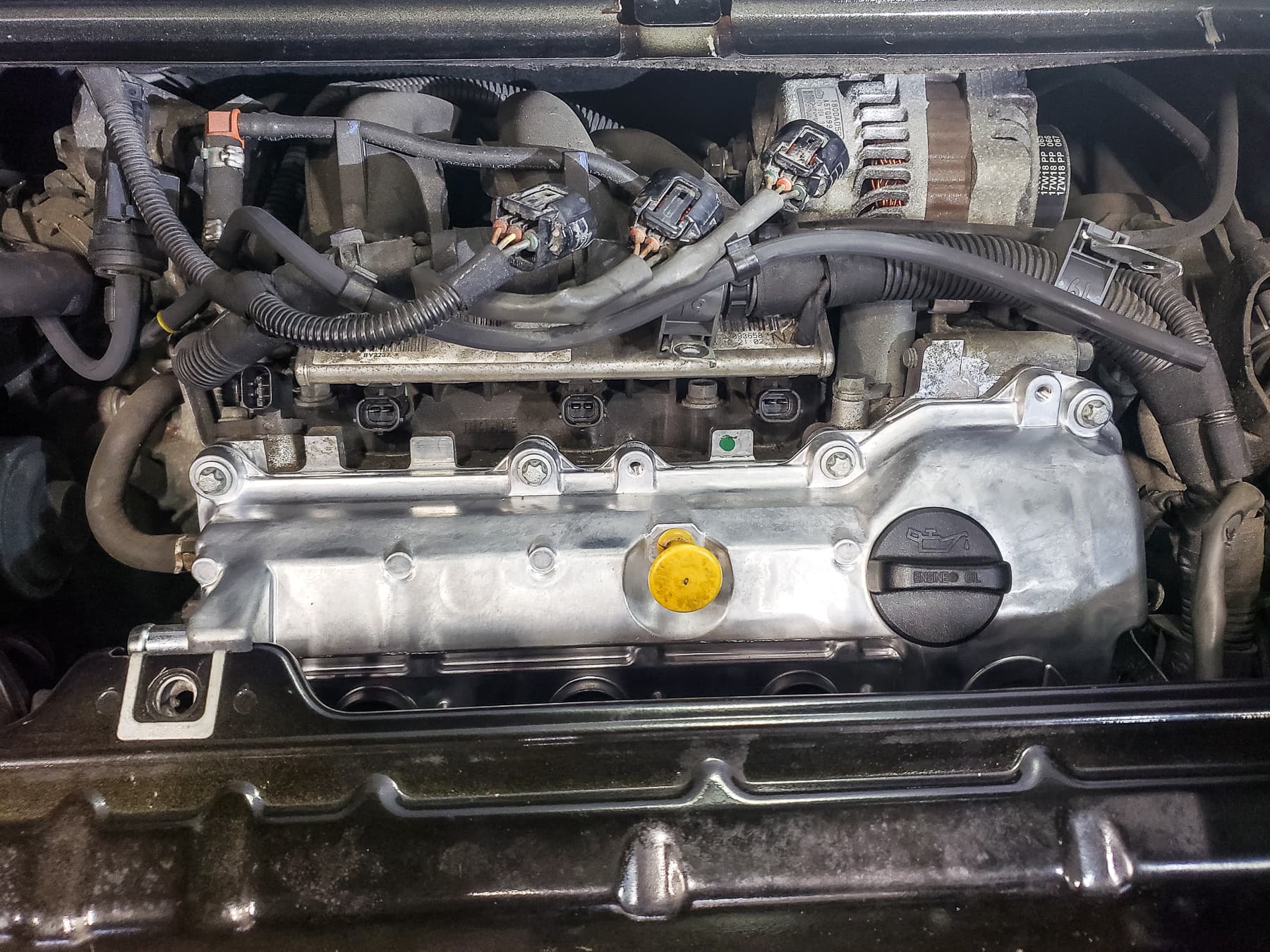 This is a picture looking down to the engine compartment. This is the new valve cover put in. The coils, this is sort of the lip of the engine bay. This engine is in the back of the vehicle. A little bit hard to get at the stuff. These wires here that I'm pointing out with the most pointer are for the ignition coil wires. The coils fit in here. And the fuel injectors are sitting here. There's wiring that needs to be connected up there as well. So those are pictures show.

Mark: Okay. So did you have to replace the ignition coils?

Bernie: No, we didn't replace the coils. They were fine. We cleaned them up with brake clean, which removes all the oil and they were in good shape. So if you were to have left them for a very long time, it might wreck the rubber boots that go over the spark plugs. But in this case it was fine and they all worked fine. So they should work for quite some time.

Mark: So other than evilness, why would someone make and sell a valve cover gasket when it doesn't work?

Bernie: I really don't know. It's really dumb and kind of annoying in fact. Maybe on some occasions it works, but we've tried it a couple of times, as I said. We had one that we went through and it ended up costing us a lot of extra time and grief to try to fix it. Sometimes when you fix cars, you learn that certain things have to be done a certain way. And the more expensive route first off is the best way to go. It's just a little bit harder to sell when you're faced with a bill of a thousand dollars plus for a valve cover job and you go, wow, it's a little dinky car. You know, it's a lot of money when you could get a gasket. But you got to fix it the way that works. So, yeah. I'm a little annoyed that this manufacturer actually sells it in the first place.They really shouldn't.

Mark: These are very unique automobiles, not a lot of them around. Three cylinder engine, which is kind of very strange in itself. How are Smart cars for reliability?

Bernie: They're not bad, but they do have a lot of things that do go wrong with them over time. And they are expensive to fix because it's a Mercedes. They're kind of exclusive and they've never sold a lot in North America. I mean, for awhile, they were only selling them in Canada and not the US and I'm not really even sure what sort of volumes they sold in the US. But the original diesel models from the sort of two thousands decade, those were only sold in Canada. So parts are hard to get. They're kind of an expensive vehicle to fix once they get older.

So they're fairly reliable, but I think they reach a point where they're just not economically worth fixing anymore after a certain amount of time. This one still has pretty low mileage. It's a nice car because it's a convertible and still get some good life.

Mark: So if you're looking for service for your Smart car or Mercedes-Benz in Vancouver, the guys to see are Pawlik Automotive. You can check out the website and book on there, pawlikautomotive.com. They'll call you. They'll check out everything what's going on. There'll be ready for your appointment. Or you can phone them (604) 327-7112. You have to call and book ahead or book online prior to your appointment. They're always busy. They will look after you. Best auto service in Vancouver, pawlikautomotive.com. Thanks Bernie.

Thanks Mark. And thanks for watching.