Today’s feature is a 96,000 kilometer service performed on a 2010 Subaru Forester, brought to us by a client from New Westminster. 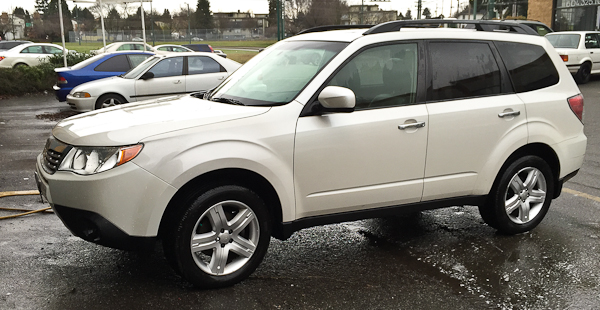 As cars have become more reliable and better built the 96,000 kilometer service is less involved than it once was. Going back 15 years and previously most Japanese cars 96,000 kilometer services included replacing all fluids: engine oil, transmission fluid, differential fluids, brake fluid, power steering fluid and engine coolant. There was a tune up with new spark plugs and fuel filter plus other ignition components as needed. Then there was the timing belt. Often we would also find that the CV joint boots were about to break open and needed to be replaced. As you can imagine this was a big service: lots of work and expensive.

Nowadays there is much less. Our featured 2010 Subaru Forester’s service was major but much less involved. All the fluids need to be flushed or replaced except the engine coolant. The tune up now only consists of spark plug replacement. Fuel filters are no longer replacement items. The timing belt is still there but is much tougher and will last until the 168,000 kilometer service. CV boots are also tougher and rarely need replacement. This brings the cost of the service down substantially however there are a couple of additions. This car needed the cabin air filter replaced and some of the fluids are synthetic which ups the costs of these services. Spark plugs are platinum and this raises the price over the plugs of yesteryear. Overall, for the car owner it is much more reasonable. It’s a reflection of just how much more reliable and well built today’s cars are.

For more about the Subaru Forester click on this link http://en.wikipedia.org/wiki/Subaru_Forester

For more about the value of maintenance click on this link http://goo.gl/Wq2HSv 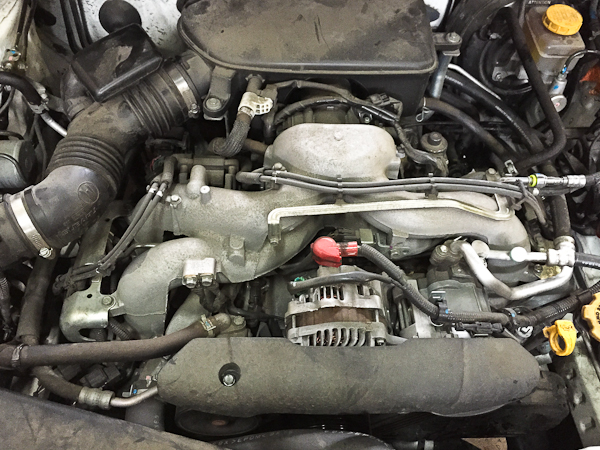 Engine Compartment of 2010 Subaru Forester. The large metal piece in the center is the intake manifold. The fact that this is metal and not plastic will likely save the Subaru owner money. We see numerous problems with plastic parts.