Mark: Hi, it's Mark from TLR. I'm here with Bernie Pawlik, Pawlik Automotive in Vancouver, BC, Canada. Vancouver's best auto service and repair facility. And of course, 24 time winners of best auto repair in Vancouver as voted by their customers. We're talking cars. How are you doing Bernie?

Mark: So today's first victim is a 2011 BMW X3 I Drive Controller. What was going on with this BMW small SUV?

Mark: So what's an I Drive Controller and what does it do?

Bernie: Yeah. So this is something BMW put in, in the, I'm going to say late 2000s. It's a nice, cool little knob near the gear shifter on the console. And what it does is it controls the radio, the navigation system, all sorts of features in the car.

I mean this, on this BMW, you can actually turn the knob, click buttons. You can access a full owner's manual. It gives you status of oil change services or brakes. There's other inputs you have to do to make sure it's all accurate, but generally, you know, there's timed oil change intervals and things you can look at. Any services, any issues that come up with a car, everything will be displayed.

And so this knob is actually, and this whole system has got knobs and buttons. We'll look at pictures in a few minutes. If you own a car, of course you know at BMW, you know what this thing is. It does a lot to the functionality of the vehicle. Still drives without it, but things are missing.

Mark: Cleaning has to happen. What happened to this I Drive Controller?

Bernie: Well, basically the the owner had sprayed a lot of cleaner around the console area. And I guess some of it leaked into the controller unit. So you know, cleaning with caution is important. It's better to put the cleaner onto the cloth for instance, than it is to spray it around the various components on the vehicle. Sometimes it seems like, oh yeah, just spray it on a, wipe it off. But with sensitive electronics you've got to be careful of where things go.

Things like water intrusion with so many computers and wires in cars, you have to be careful. You don't have water leaks in the cars that we fix a lot of issues with cars where water's leaked in and the damages wires or control units. So same with cleaners. If you sprayed in the wrong spot or too much of it, it can cause damage.

Mark: So how did you repair the I Drive Controller?

Bernie: So for this vehicle, we actually opted to use a used unit and I shall just share some pictures here. We've got our nice blue coloured X3 2011. 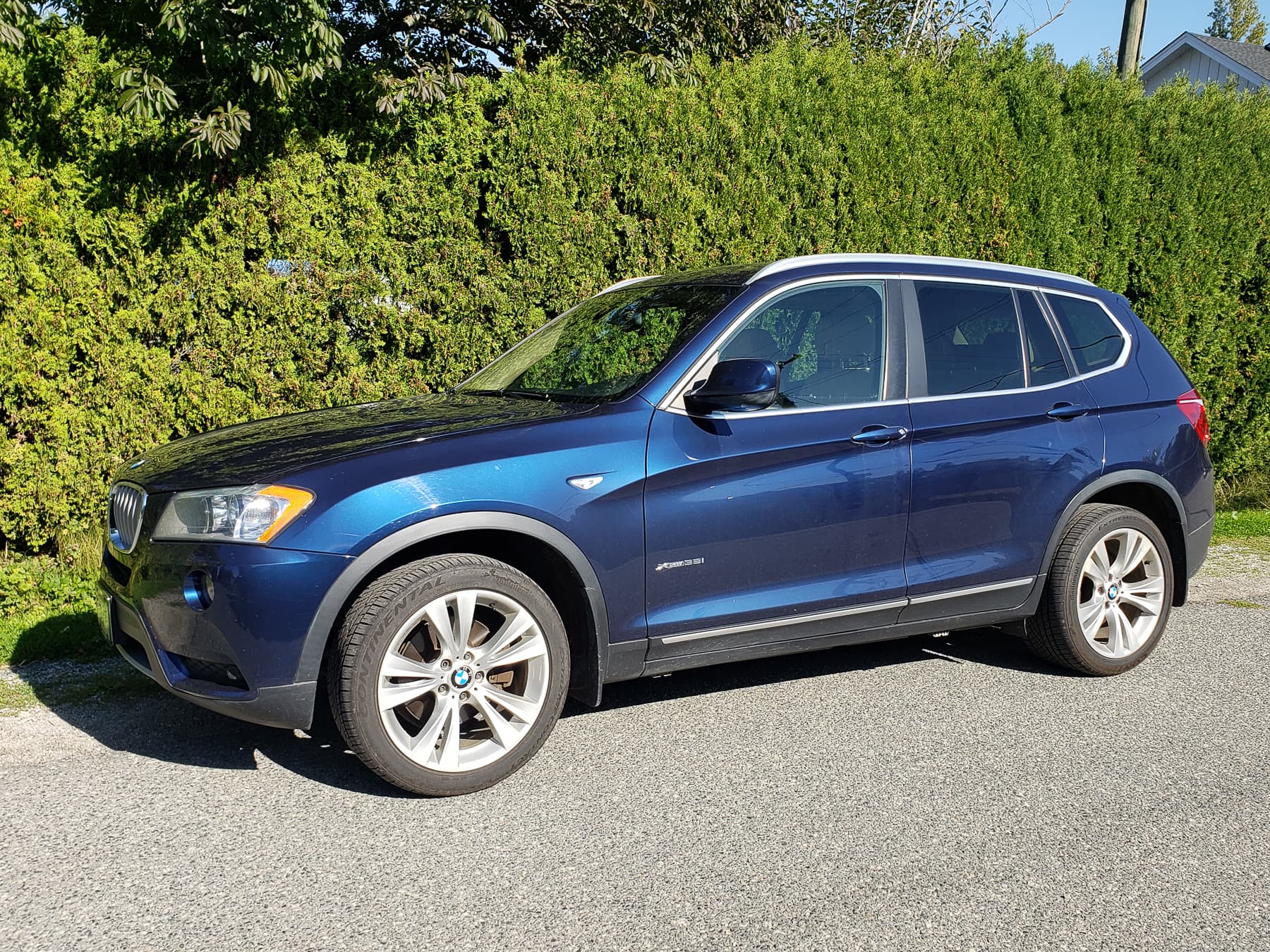 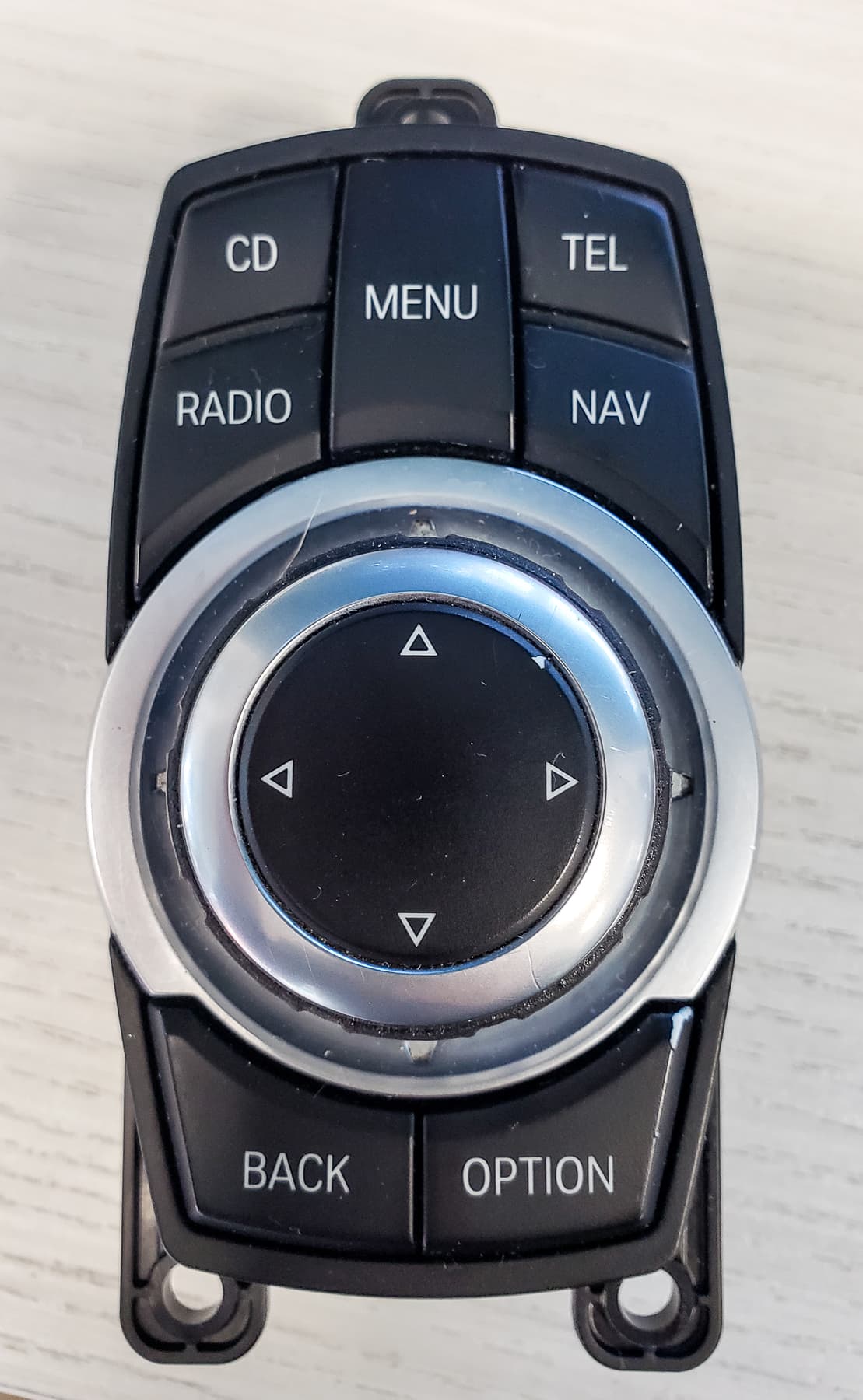 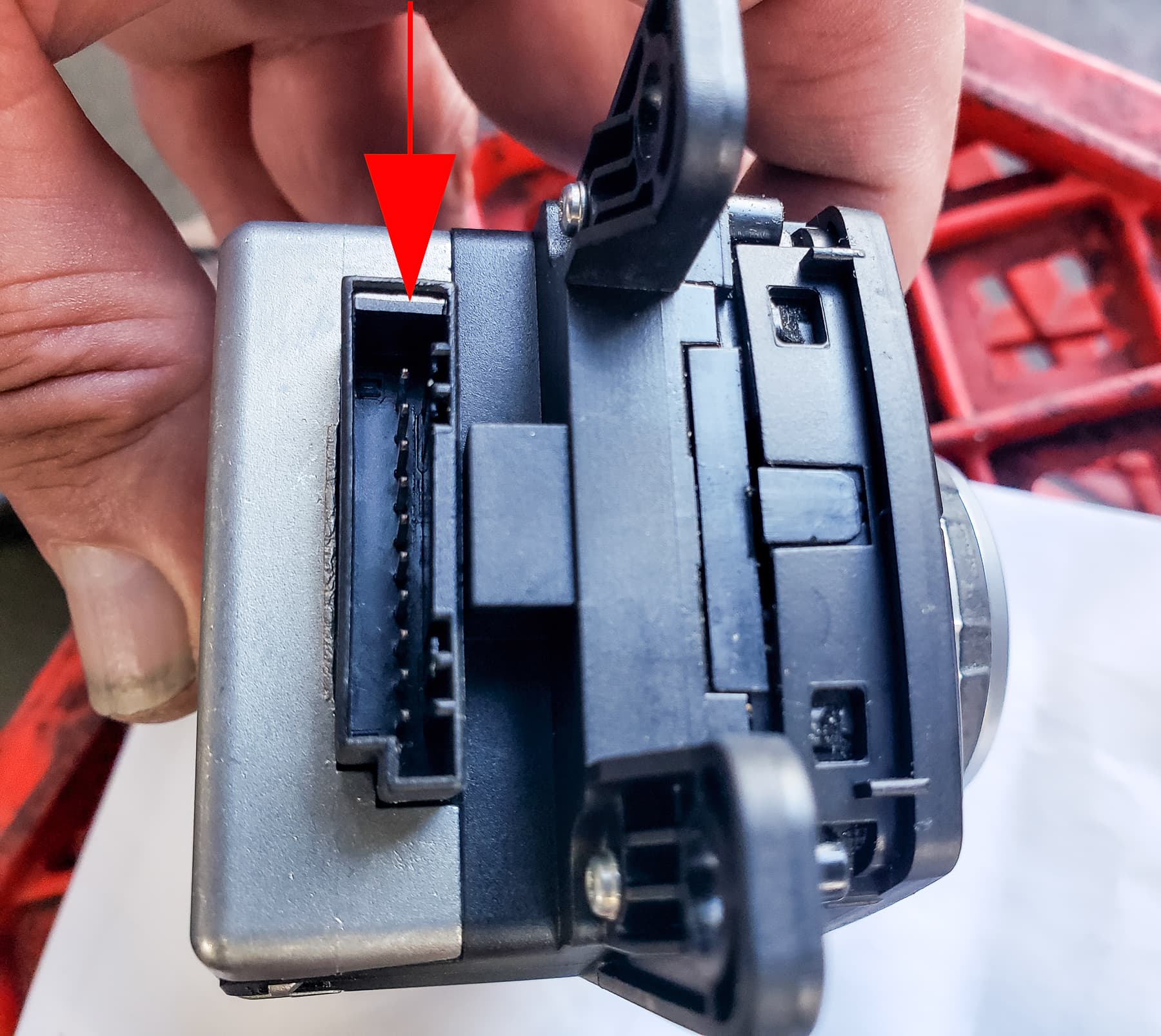 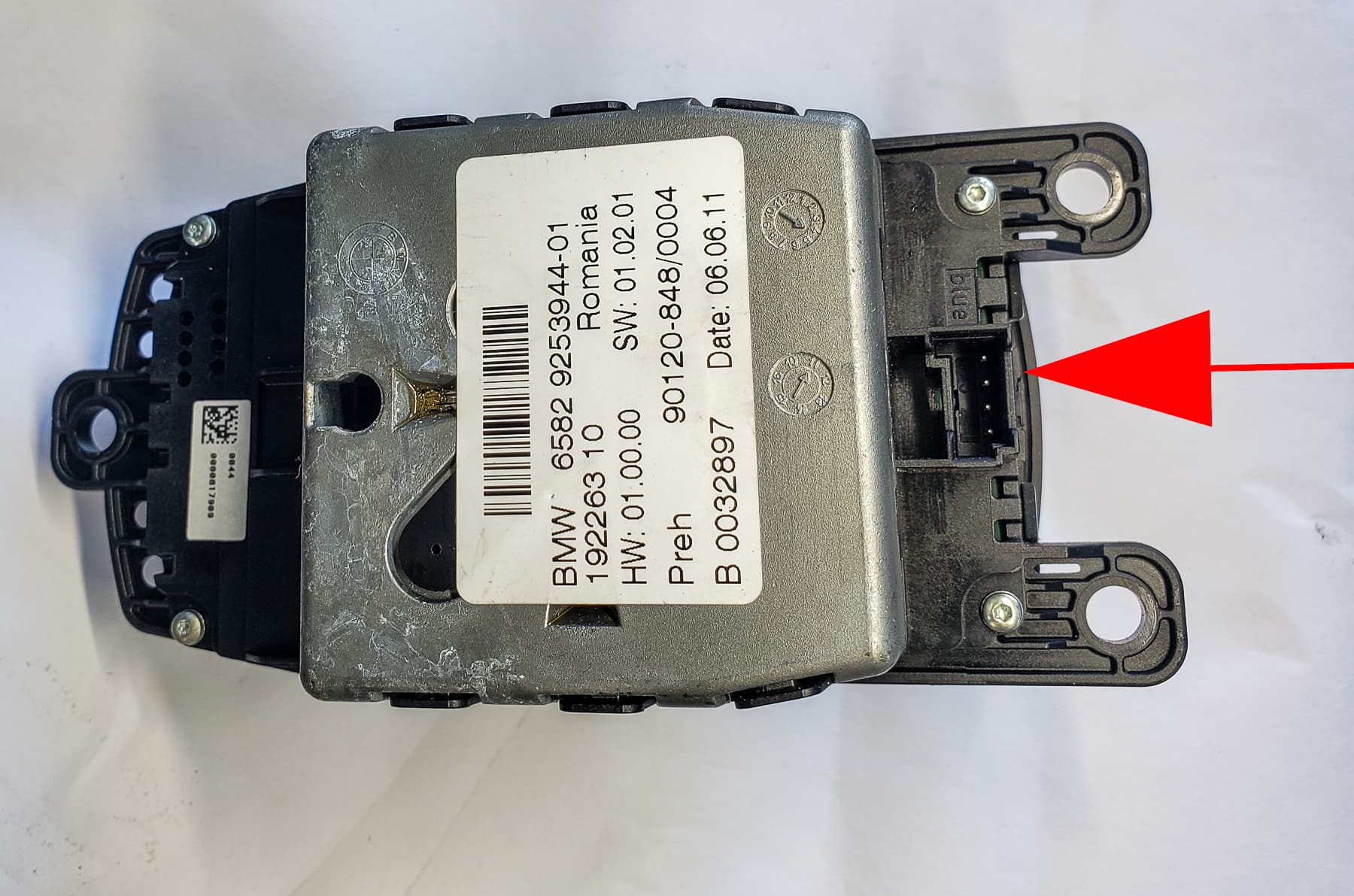 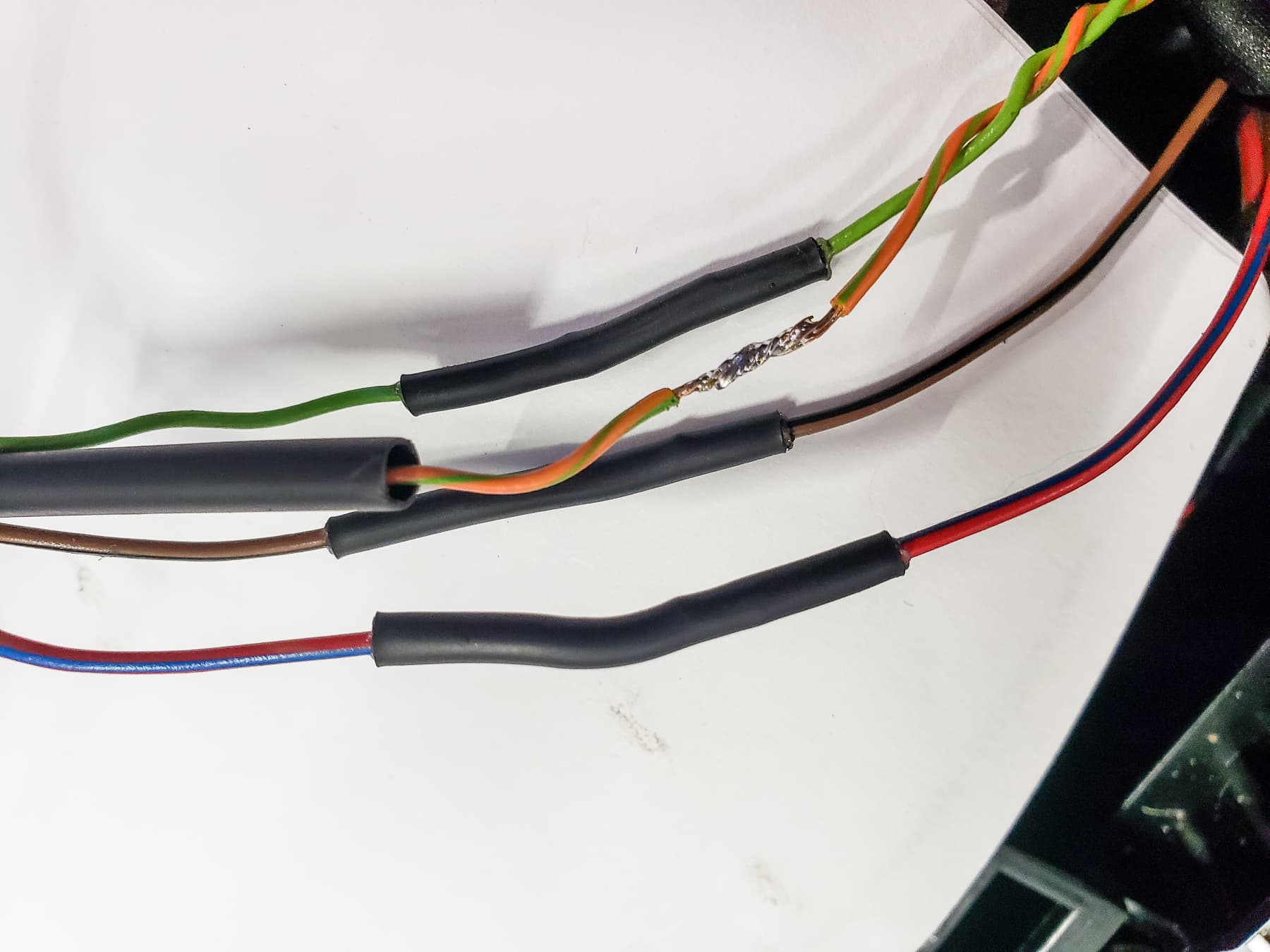 As far as pictures go. So we ended up putting a used unit in the vehicle. There's a picture of the I drive controller. So as you can see this knob, it's like a little joystick, push it back and forth. And there's also a knob can rotate. A ring you can rotate and then buttons for various items here. So we ended up getting a used unit and the reason why the owner actually had an extended warranty, but the extended warranty didn't cover this particular part.

We'll just get briefly into extended warranties, but there are different levels of extended warranties. You can get to like a basic one, which usually covers sort of engine components and drive train. So if your engine blows up or transmission you know, fails, it'll cover that, but it won't cover a lot of other items like ignition coils or computers or anything like that. Then you can get different levels of warranty.

And this one had the plus warranty but it didn't cover things like the I Drive Controller. And I actually called the warranty company to put a claim in and well, it says it covers the navigation system and the radio, which this thing I think is an integral part of, because the controller isn't a listed item, they wouldn't cover it.

But apparently if you had the elite plan, it would be covered. So this is something we can talk about in a further podcast, but when you're looking to buy an extended warranty, look at what's covered and you really need to go over the details. And then of course, weigh the costs, because the elite warranty does cost more money.

So we ended up going for a used unit based on price. The new ones in Canada, 650 bucks. So we managed to get a used unit for much less money. We ran into something interesting on this car though. When we went to change it, there's the electrical connector there in this particular 2011, it's got about 11 pins on this electrical connector.

We got a used one. Again, this is a pretty common part. The used unit had a four pin connector, which didn't work. So send it back and it turned out after calling a number of auto wreckers, nobody had one. I guess 2011 was the first year they use this and they use this other connector. But what I noticed is the actual unit is exactly the same.

And even though there's 11 pins on this electrical connector. Even those 11 pins here, they actually only use the four on the right. And they actually happened to be the same colour code. So I got a wrecker of send me a wiring harness with the four pin connector and we soldered the wiring in and it worked just fine. So learned a valuable lesson there.

Actually, if you have a 2011, you're watching this and you get the wrong thing, you can always just make sure you get the wiring connector from the auto wrecker and soldered it in. And just a little example of the work we do. We like to solder and heat shrink all the wiring we do instead of twisting things together, using butt splice connectors. There's a place for all of those things, but solder and heat shrink is basically the best way to do it.

This wire is like, there's no break in the wire whatsoever and it'll be bullet proof for life. So things like butt splice connectors, we don't like to use those unless there are certain circumstances, but very rare in our shop.

Mark: How'd the vehicle run after you made the repair?

Bernie: Oh it was good. Yeah. Everything worked fine. This is a plug and play unit. So there are many modules and things on European cars, especially that if you put it in, you've got to program it. This is just a basic switch item. So no need to program it. It works fine without any programming. So that's a good thing. Yeah, it worked fine. Restored everything back to normal.

Mark: I bet that that change is changing as we get into 2021, 2022, that pretty much everything has to be reprogrammed.

Bernie: Well yes and no. I think it depends on whether it's a module like a computer unit or whether it's a switch. And essentially this is just a very fancy switch. I'll just go back to this picture for one second here.

You can see there's four wires in this, so this is the power wire. So battery voltage. This is a ground wire. So basically some of the power the unit up, and then these two are data communication wires. So there's a can bus. That's a computer network. And so this is how so many computers and modules work on so many vehicles from a power window switch to to this I Drive Controller.

Even though it's got numerous knobs, you think it should have a hundred wires going everywhere. It only has four. And that's what we find in a lot of components on modern cars. This just goes to a computer and that computer talks to another computer. And it's pretty cool. It's amazing.

That's why we can have so many advanced electronics in cars. So much in there without having like, you know, a hundred or 200 pounds of wires and a million miles of wiring. It's just how it all works. So it's complicated, but it's simple. If that makes any sense.

But the thing is you need the computers to work on the car. So, you know, without having a scan tool and a lot of things, it's hard to know. Like when I plugged a scan tool into the unit, you can actually turn the knob and you can watch it on the scan tool, how it's rotating. You can push the joystick back and forth, and it'll show you which things are working. So then it helps us our diagnostics. But again, it's simple, but you need the computer.

However, this was a simple diagnostic because not only, you know, the owner said there was some smoke coming out of the unit, but it smelled burnt. These are things where you don't really need a complex diagnostic tools. You can just go, Hey, it got screwed up. Change it.

Mark: How are BMW X3s for reliability?

Bernie: Well, they're kind of not the most reliable there. There's a lot of things that do happen on these vehicles. Oil leaks, water pumps you know, they have electric water pumps that fail. Coolant hoses, they got a lot of plastic bits and pieces that break. It's kind of typical BMW. So I'd say it's not the most reliable vehicle. I mean, I shouldn't say it's not reliable, they are. But you'll have a lot more repairs to do on this as opposed to a Toyota product or even a lot of other brands. Nice vehicle to drive though, for sure.

Mark: If you're looking for service for your BMW, so that it's reliable, the guys to see are Pawlik Automotive. You can check out and book on the website pawlikautomotive.com. Or if you need to call to book ahead, and you must, they're busy. Give them a call at (604) 327-7112. They'll work through it exactly with you. Get all the parts ready for you, so that they're ready when you show up to do a great job. Get your vehicle running again. Check out our YouTube channel Pawlik Auto Repair. We've got close to a thousand videos on there. We've been doing this for 10 years, all makes and models and types of repairs. Thank you for watching and listening. We really appreciate it. And thank you, Bernie.

Bernie: Thank you, Mark. And thank you for watching.