Mark: So how do you go about diagnosing where the oil leaks coming from?

Bernie: So we have a few different methods at our shop. First of all is a visual inspection to see if there's any obvious leaks. And usually that involves on this BMW, removing splash shields from the bottom to see where oils coming down. From there we add UV dye to the engine oil, run the vehicle for a little bit to see where the oil's coming from. Or shampoo the engine, depending on the circumstance. Every vehicle's different.

Some oil leaks are really obvious. On this vehicle, it actually had an oil pressure switch that was leaking, which you could see oil seeping out of the switch area. Not much rocket science required in that diagnosis. Just replaced the switch and it's done.

But for the other leaks, we clean the engine off, put the UV dye in, we could see the oil's leaking out of the sort of rear bottom of the valve cover gasket and the other indicator also, when you shut this engine off, there's a little smoke coming outta the engine. So it was actually burning oil off of the exhaust system. And that's often a valve cover gasket. But there could be other areas.

Mark: So is this, just for interest sake, is this a V or a straight six?

Bernie: It's a straight six, yeah.

Mark: So what sort of job is it to replace this part?

Bernie: It's actually not too bad on the X3, there's actually a fair amount of space. Usually on the 3 series or the 4 series, usually the firewall's kind of crammed in down on the engine. So this one, it's actually a little more roomy to replace it. It's still a few hours worth of work to remove and replace. We'll just get into some pictures here. 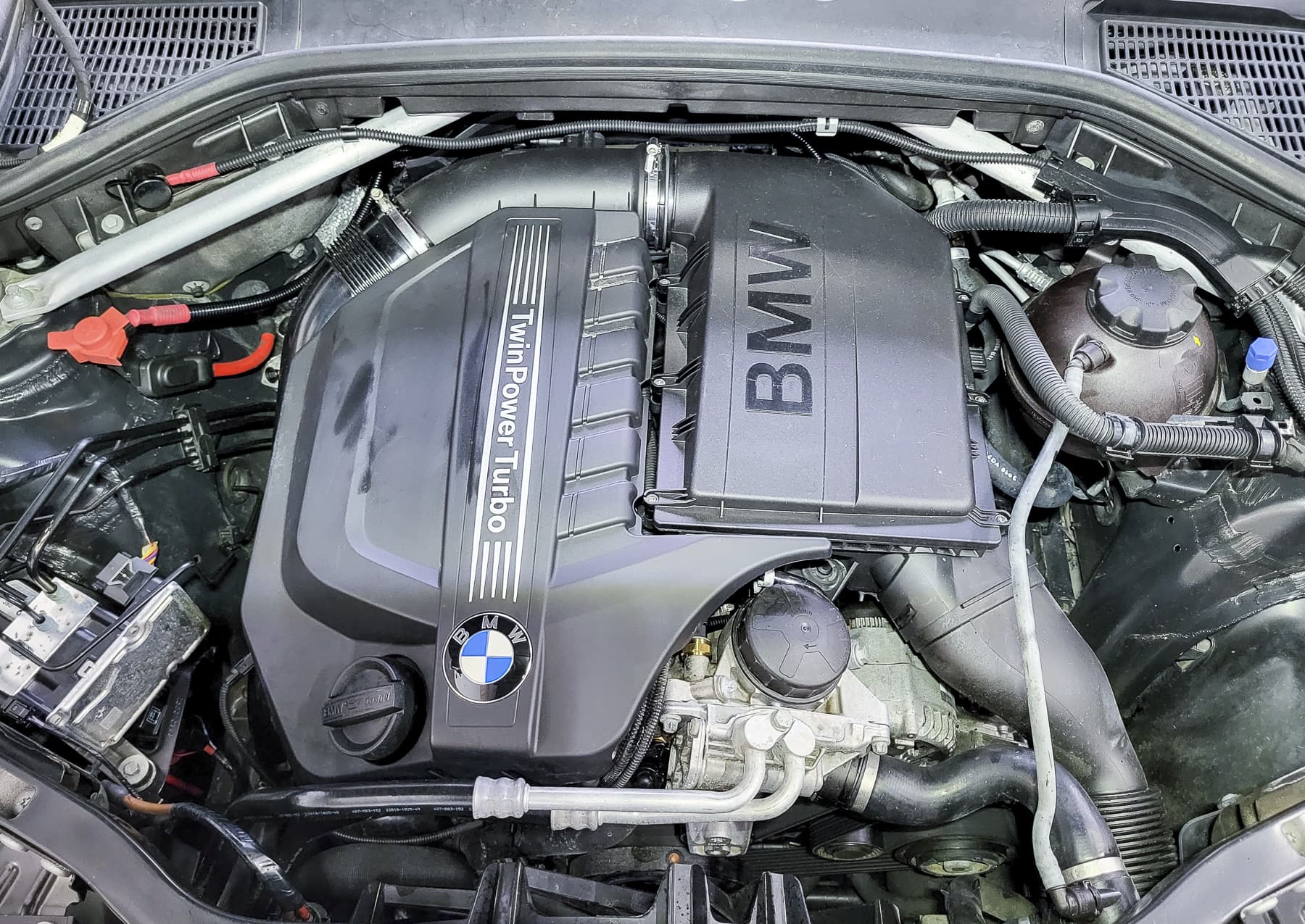 And there's the new valve cover sort of loosely installed. So on the 3 series cars, you often have to remove a lot of this area here, the wiper areas, sort of the cowl area has to be removed to access it. But on this one, there's actually a fair bit of room. But the fuel injectors, fuel injection pipes need to be removed, ignition coils, there's a lot of wiring that needs to be removed. 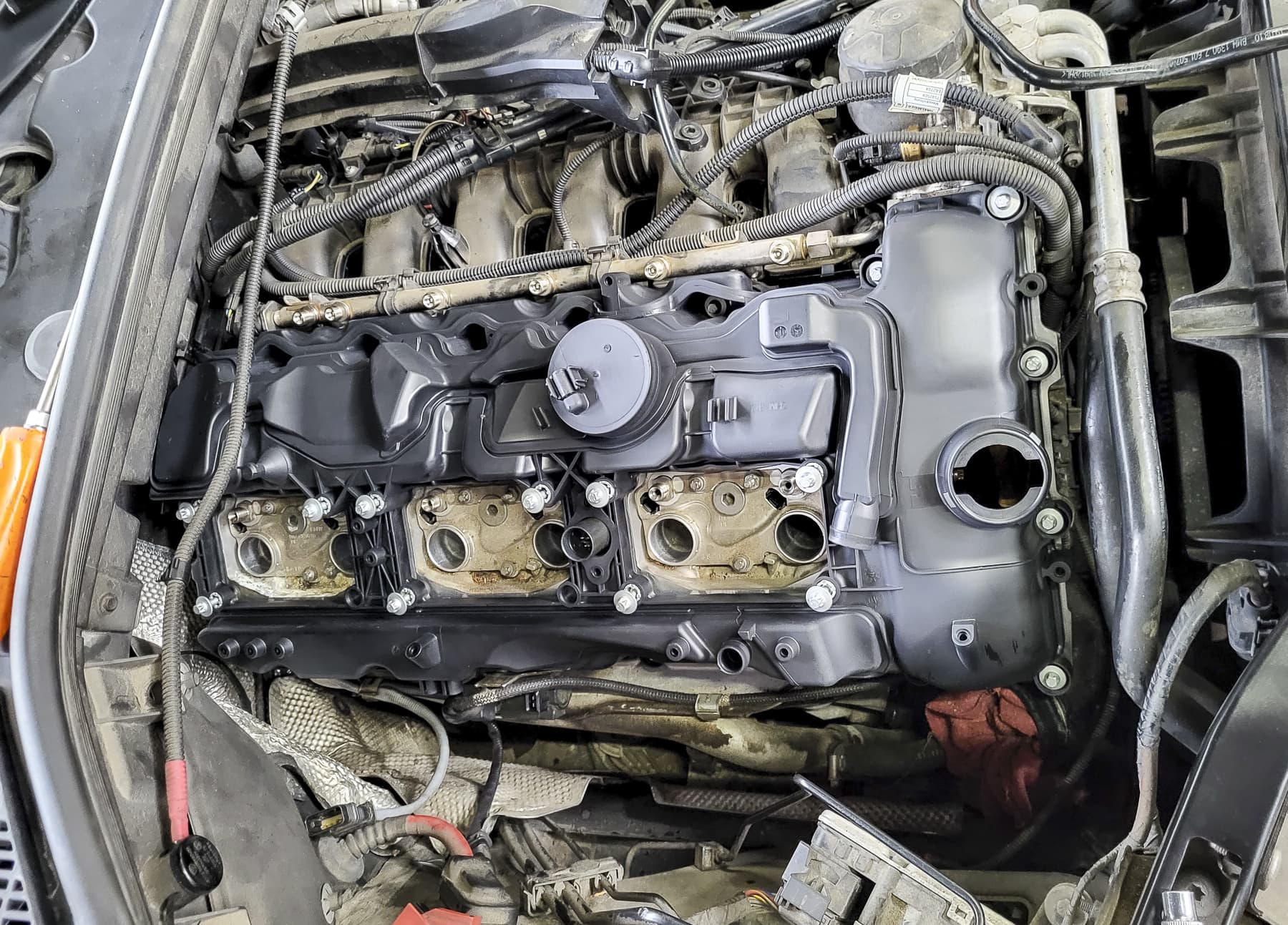 We got another picture here, it's kind a closer up view. The red arrow points to the ignition coils. So the spark plugs are located way down there. And the yellow points to the fuel injection pipes, there's a high pressure fuel injection system, injector wiring there. And the injectors are located way down on this area here. They don't need to be removed, just the injection pipes which sit over top of the valve cover. So there's our picture show. 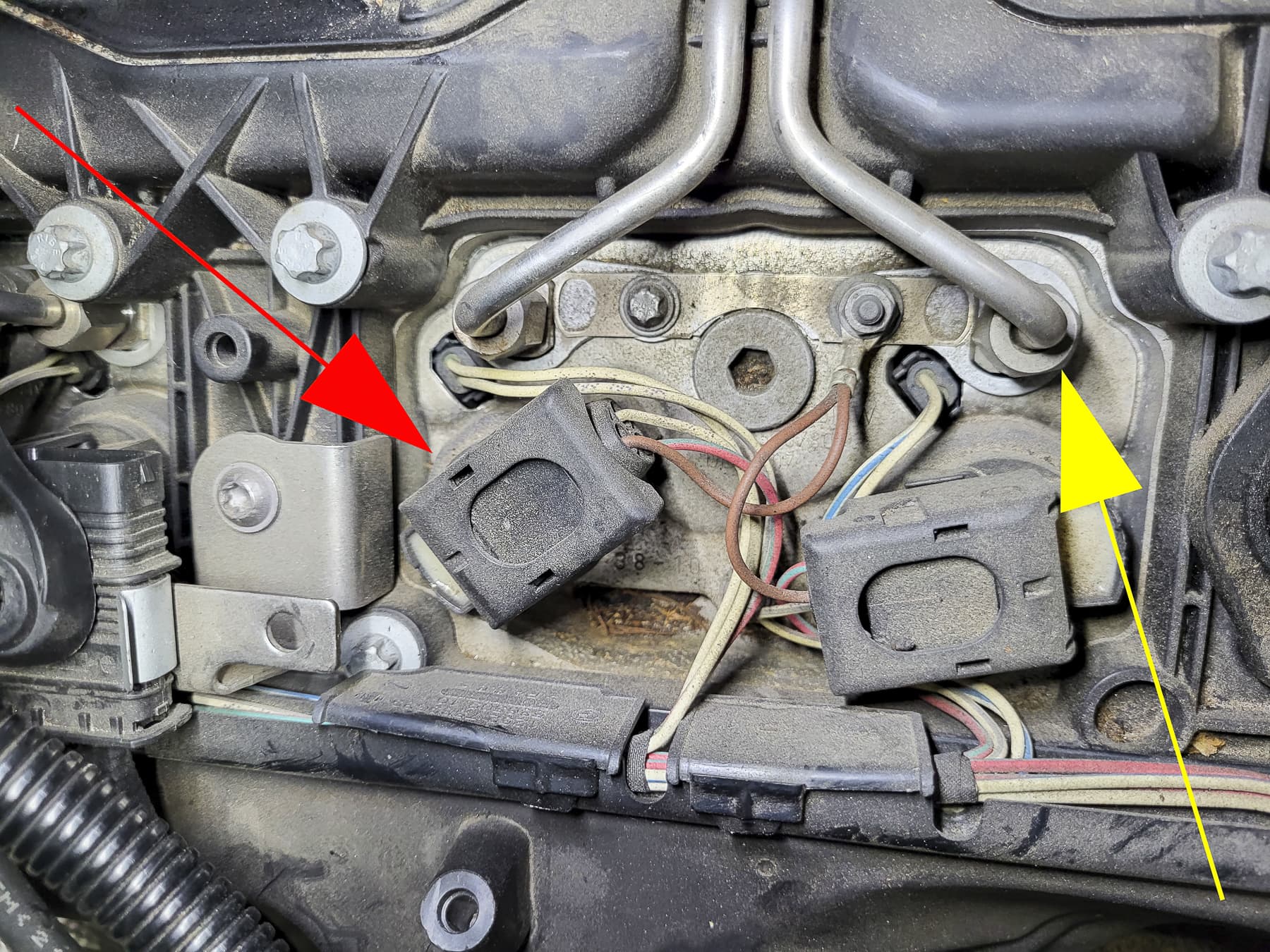 Mark: So you replaced a whole valve cover. Wouldn't you just replace the gasket?

Bernie: Well, in the case of these cars, what we found is that the valve cover, it's made of plastic. They tend to warp over time. And so yes, you can buy the gasket. The thing you need to do is replace all the bolts. They use aluminum bolts in these things, so they're like a one time use bolt. So you've gotta replace all the bolts and the gasket. Again, you know, it's a lot cheaper to just replace those pieces. But the thing is with the cover, the cover's tending to warp. You could do the. Put it all back together and then it leaks again, which is the last thing you wanna do.

So what we found is, it's better just to bite the bullet, do the whole job, put a new cover in, and it's complete. It comes with all the bolts, the gaskets, everything's just there. It actually makes the replacement a little faster. Not that we would do it if we knew the covers were good and wouldn't warp, we would just reuse the cover. But that's what we found happens frequently.

Mark: So is this a BMW thing where you have to replace the whole cover or do other manufacturers do this?

Bernie: It varies from car to car. There are a lot of vehicles that have plastic valve covers. You know, one of the things that some of 'em have they have a breather mechanism built in. These ones do too, the crank case breather, and those will over time fail. And so a lot of times you have to replace the whole valve cover just to fix that part. So again, on this vehicle we solve that issue too. And actually, I'll just, let's go back to the screen share. I'll just point that piece out to you again.

There's the new valve cover, so this is part of the crank case breather here, as well as this area here. So the breather mechanism is built into the valve cover. So if that fails, then you have to replace the whole cover anyway, so it's better at this point in time, gotta get in there, do the gasket, just do the whole thing.

But as far as other brands you know, there are other European cars where we do them. We have other cars where we do just replace the gasket, but we've had a few, you know, where they do fail. So it's a little frustrating doing the job and then having to do it again a second time, only to put the cover in. So we kind of watch each vehicle and on an as needed basis figure out what we need to do.

Mark: So oil leaks seem to be, as you mentioned, pretty common on BMWs. They were on mine. What, what are some of the other causes of engine oil leaks?

Bernie: So I had mentioned that we replaced the oil pressure switch on this particular one, so that's a cause. Oil pan gasket is a common cause of leaks and that's a pretty large job, very large, especially on an X because it's got the front wheel drive shaft that goes right through the oil pan. So you have to remove quite a few components to get the oil pan in and out. So oil pans are common, valve cover gaskets, front crank shaft seals as well. Those are some of the more common leaks.

Mark: Nothing around the turbos and stuff?

Bernie: They can. Don't see them too often, but anywhere where there's oil being pumped and flowing is a potential leak. Head gaskets, knock on wood, you know, since I actually own one of these cars, seem to be pretty reliable.

Mark: And you mentioned reliability. How are BMW X3s for reliability?

Bernie: Well, you know, they're a little more problematic than your Toyota, let's say. But, I've actually owned an X3 for, it's got 160,000 Ks now. It actually hasn't been that bad of a car. At first there was a few issues like, you know, the oil pan gasket leaked that under a hundred Ks. So I going, well that's not so great. But I'd give it some time and a bit more mileage, the car has actually proven to be, I think, fairly reliable, but there are a lot expensive things that can go wrong. And you know, again, this valve cover, for example, it's an expensive job to do.

Mark: I don't understand the plastic valve cover or the aluminum bolts. Explain to me what's going on there?

Bernie: Just lightweight. They use a lot of aluminum fasteners on BMWs. They work well once, and, you know, and so the thing is whenever you do a job, I believe the oil pan may have aluminum, I can't remember, but it's all about saving weight. It's kind of bizarre because you can have a handful of these bolts that you normally have a feel in your hand like, Oh, this is, you know, there's a weight and they weigh nothing. So I sometimes wonder to myself, I mean, out of a whole engine, I mean, how much are you gonna save? Like five pounds? I guess every pound saved is energy less wasted. But I sometimes wonder, you know, especially if a car gets older, maybe they decide, Hey, we don't wanna sell these bolts anymore. What are you gonna do? Throw a car away because you can't buy the aluminum bolts anymore.

So it adds cost to repairs. Sometimes I find it a little weird. But they do work. They work fine. But they're really, again, only one time because once you toque 'em back, they just don't have the strength to be torqued multiple times. The good news is with this valve covered job, you know, this BMW has a 160ish Ks on it, you know, chances are assuming we did our job right and torqued everything well and the valve cover we replaced, the quality is good. You know, you should never have to do this job again. So that's kind of a positive thing.

Mark: So there you go. If you're looking for service for your BMW in Vancouver, the experts to see are at Pawlik Automotive. You can book online at Pawlikautomotive.com. They'll call you back. They'll find out what's going on. They'll get ready for your appointment. Or you can call them and talk to them, (604) 327-7112. You have to call or book online ahead of time. They're always busy. Pawlik Automotive in Vancouver, BC Canada. Thank you so much for watching and listening. Thank you, Bernie.