Mark: Hi, it's Mark from Top Local. I'm here with my good friend, Bernie Pawlik, Pawlik Automotive in Vancouver, 23 time winners, 23 time winners of Best Auto Repair in Vancouver as voted by their customers. And we're talking cars. How are you doing Bernie?

Mark: So today's victim 2011 Jeep Grand Cherokee that had something weird happened with that blend door motor, what was going on with this vehicle?

Bernie: Yeah. So blend door motor is actually part of the heating system and the owner's complaint was that on the right side of the vehicle, this is a dual climate zone vehicle, there was no heat. They couldn't control the heaters, just blowing out cold air.

Mark: So what tests did you do to find out what was going on, where the problem was?

Bernie: There's a few tests we can do, because these things are all electronically controlled, they have little motors that control things, and it's fairly advanced. You know, it's an electronic climate control system. We can hook a scan tool up. We can actuate things. We can do tests and see how things are working on the electronic end of it.

So we did that and basically concluded there's something going on with the blend door motor, like everything electrically was working fine from the electronics perspective, but it still wasn't operating the door. So we figured we had a mechanical problem. At that point, we did a little physical inspection access to blend or motor and found there's a broken gear that attaches to the end of the door where the motor actuates and moves the door.

Mark: Okay. So how do these motors and blend doors work?

Bernie: Well, basically inside a heating box there's, they're pretty complicated. So you have your air conditioning condenser on one side, you have your heater core on the other side, which is the hot air, the cold air. And then depending on how you do your settings, that there are doors inside with motors that actuate them, that they will either blow air up to your defroster. They'll blow it on the floor. They'll blow cold air on one side, hot air on the other. However you want to choose it. All of them have doors and motors, so that makes it very complicated setup.

I'll get into some pictures, just show you the repair, the motor we did, but that's basically how they work and what happens. So if something breaks of course, if a door breaks or motor breaks, things don't operate as they should. 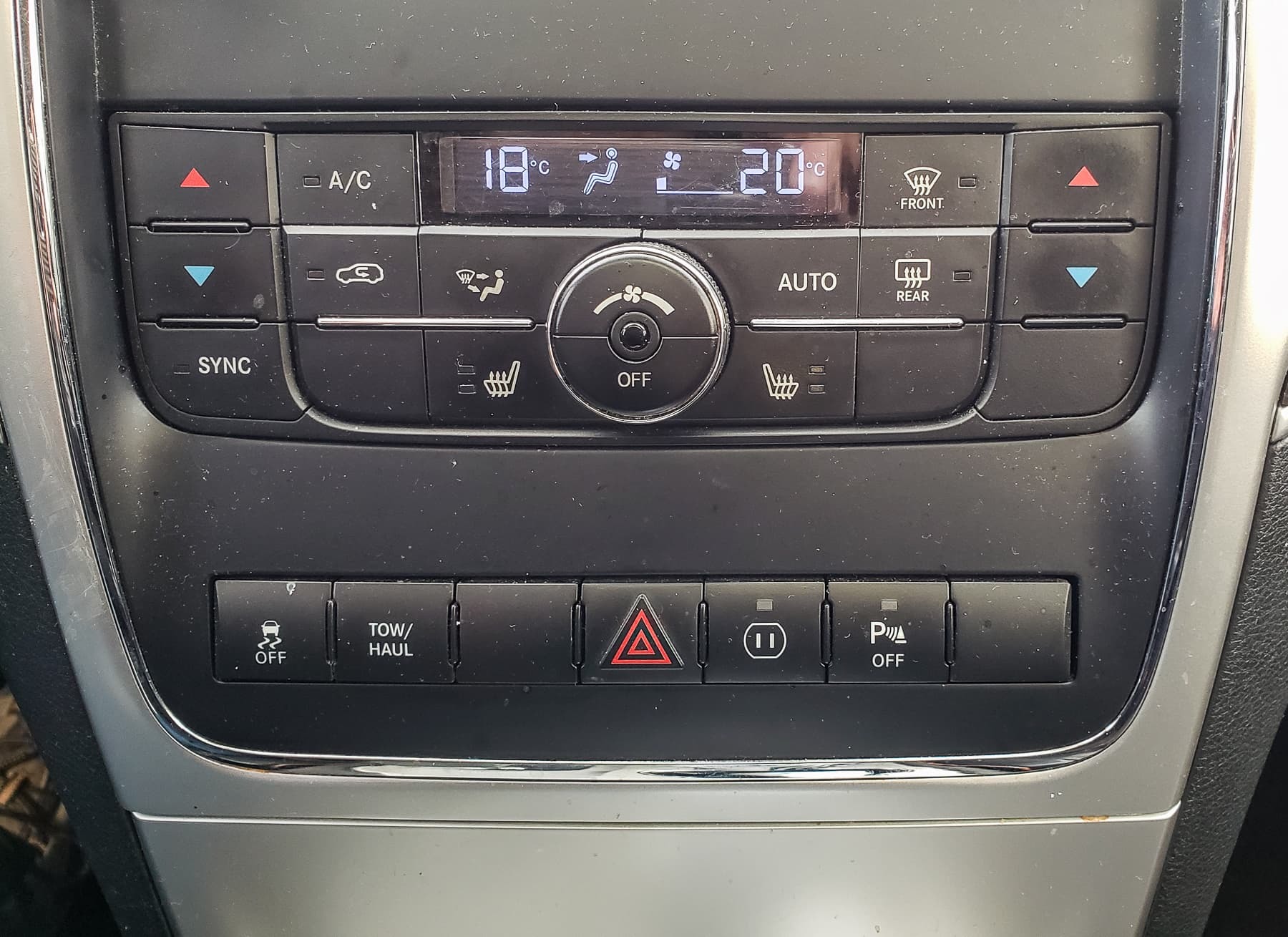 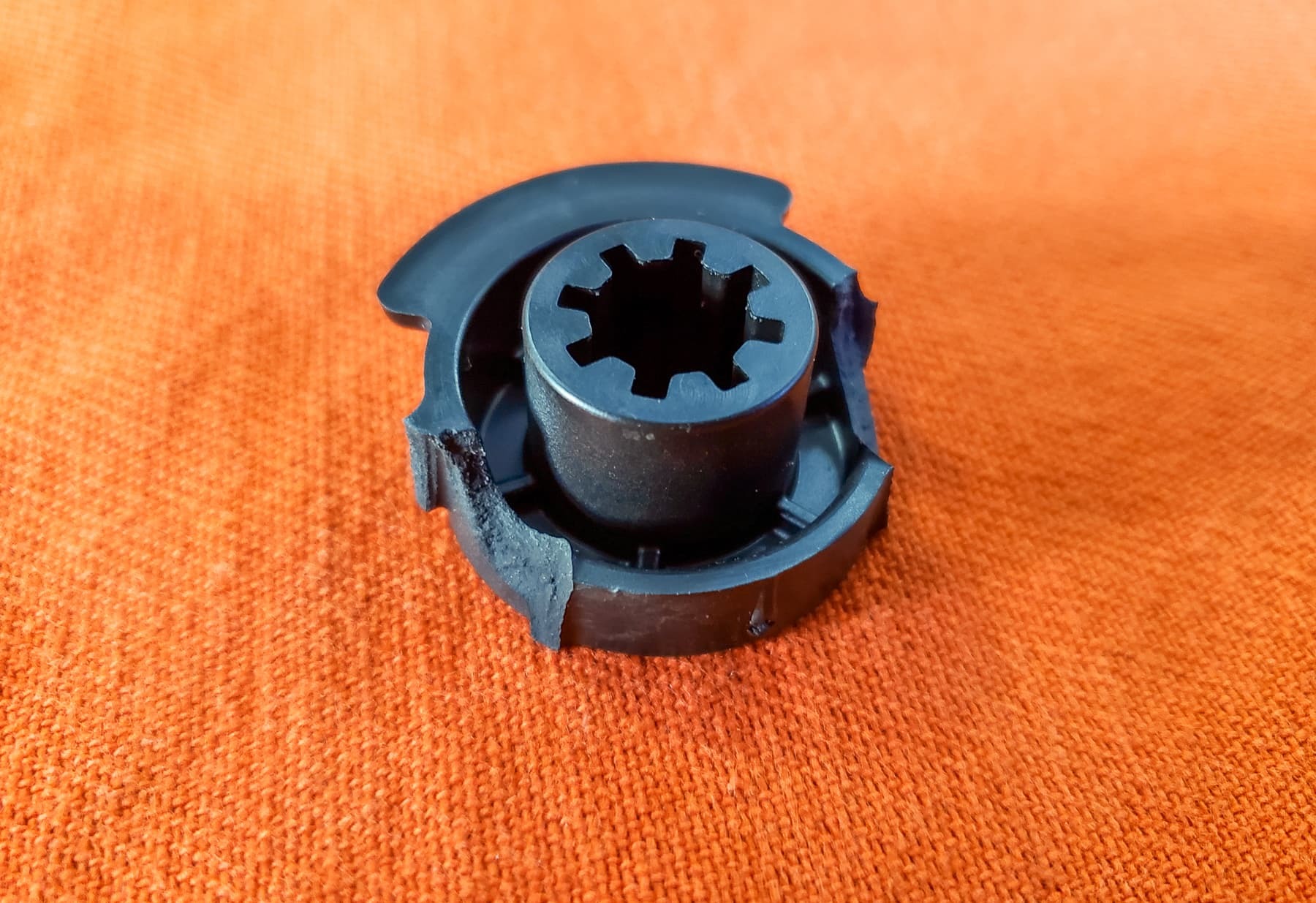 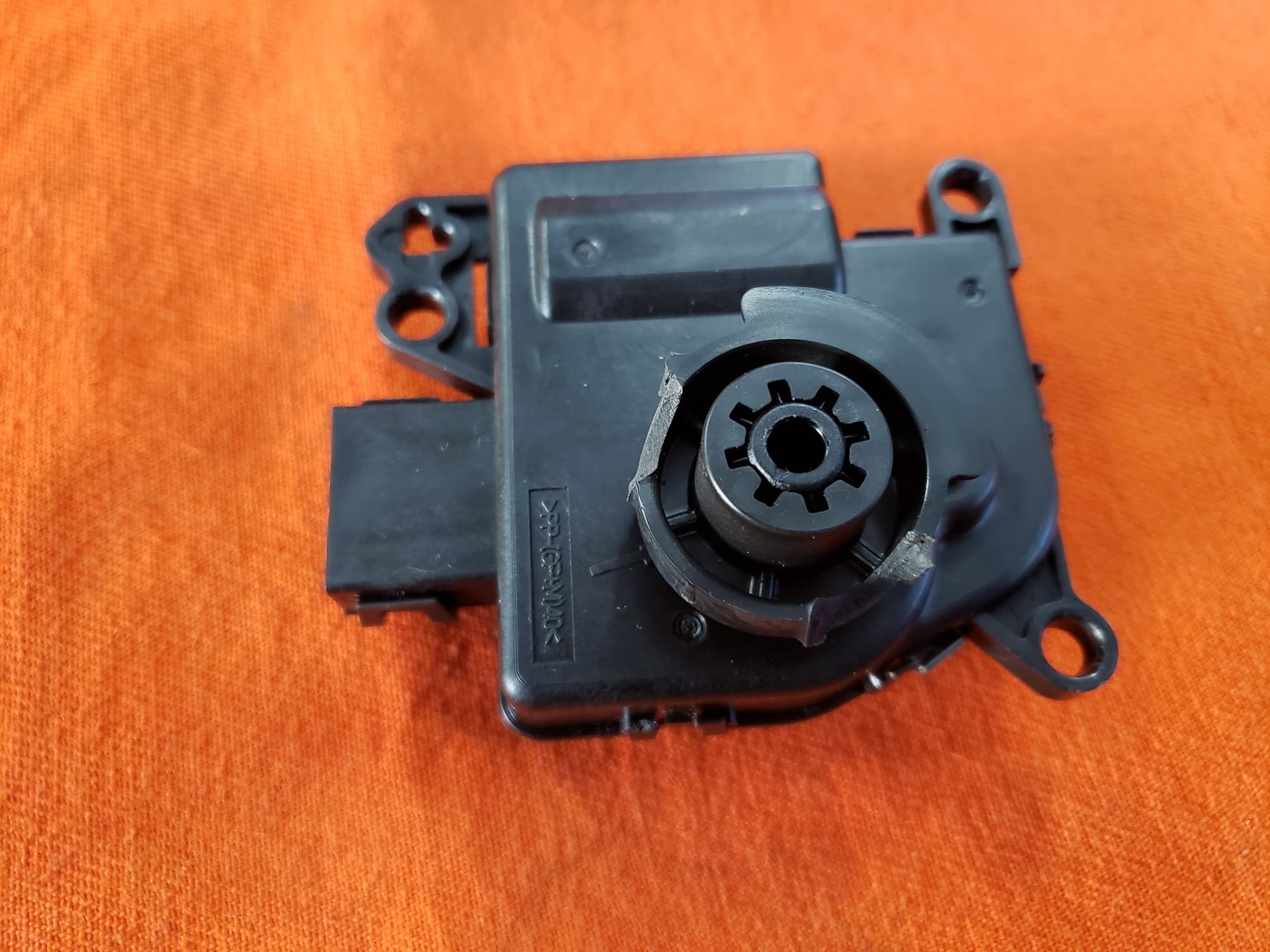 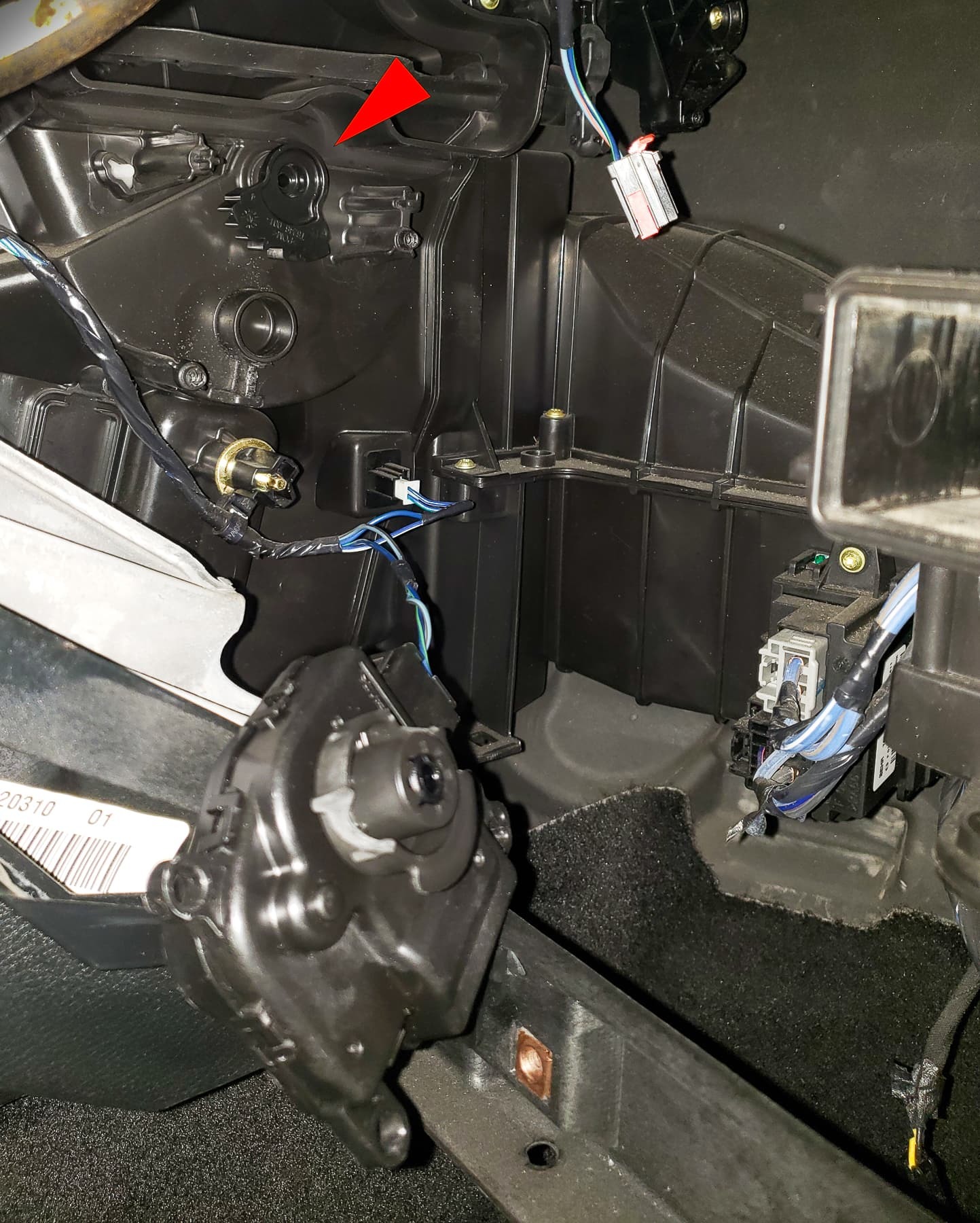 There's our Jeep. Beautiful 2011 Grand Cherokee. Nice model, fully loaded. With all the nice options is what makes these vehicles nice. Here's a view of the the heater control panel. So you can see, you know, in this particular moment, it's set for 18 Celsius on the driver's side, 20 on the passenger. And there's the controls. Now what was happening of course is no matter which way you set this, doesn't matter how hot you'd do it it would still only blow cold air on the one side, cause the door was stuck in one position.

The part. There's our old motor, this is the broken gear. And there's the actual gear again. You can see a chunk of plastic missing. I don't have the other parts of the gear, but there's big teeth that stick out in this area here. And again, this is the motor kind of with the gear assembled onto the motor.

And there's a picture of where the unit sits and there's a little arrow there. There's the new gear you can, if you look closely, you can see about five or six teeth on the gear and that sits, the actual blend door is inside this area here. So this whole assembly here, this is part of the heater box. This only part of it. A lot of these will take up three quarters of the underside of your dash it's an enormous amount of space underneath. So that's basically it. We're done with our picture show.

Mark: So obviously you had to take out the entire dash to get to where you could affect repairs on this blend door.

Bernie: We didn't actually. The good news for this repair is we didn't actually have to take it all apart. A lot of times you do. Sometimes they put the blend doors right at the very back of that heater box. And so you have to actually take the whole dash out just to get it one motor. But this one here was actually accessible with the glove box removed and a few items, really, not that difficult. So fortunately for the owner, not a really expensive repair, so that was a good one for them, for sure.

And sometimes you get lucky. Sometimes they can be a simple replacement. Sometimes the motor needs to be replaced or in this case, the gear, you know slips in on the outside, which makes it easy. They've actually done something right on a Jeep for once. Actually they do lots of good things, but you know, sometimes you wonder why didn't they do it easier?

Mark: So they make it complicated because it's a complicated system on the outside basically, is that right?

Bernie: Exactly. I mean, there's just a lot of complexity to it. As I mentioned earlier, you're basically controlling cold air from the air conditioning condenser on one side. Heat on the other side, you're wanting to blend it with the exact amounts. So when it says, you know, 18 Celsius, you're getting 18 Celsius air.

So there's sensors that pick these things up, but inside, you may want to be blowing defrost or in your face. And so there's a lot of different things going on and that's what makes it so complicated. And they need motors to do that. In the olden days, there was doors, but there's this simple cables that go from one to the other, but you'd either have like hot or cold.

And you know, people want the nice stuff nowadays. We're just used to it. Climate control air conditioning used to be exclusive to cars like Cadillacs, if you go back like 40 years ago. And now it's like most base model cars, a lot of them have climate control. It's pretty simple, but it's not really simple, but it's just been made so commonly that it becomes cheaper to put in.

Mark: So you service a lot of Jeeps at Pawlik Automotive. How are they for reliability?

Bernie: Well, there's a lot of things that happen to them. There's a variety of issues and you know, we've done a lot of podcasts. So I'd say they're not the most reliable vehicle on the on the planet, but they're pretty good. I mean, like a Grand Cherokee is a nice luxury SUV. You can go off road, you can drive in snow. So it's a useful vehicle, but there are a few more things that tend to go wrong with them than a lot of other vehicles.

Are they more expensive to fix than a European SUV? No. Less reliable than a Toyota, but they fill a kind of niche that isn't available in some other brands. So good vehicle, but you know, be prepared to spend a little more money fixing it and maintaining it than you would for some other cars.

Mark: And it's good off-road and good in the snow, like you mentioned.

Bernie: Yeah, exactly. It's a kind of vehicle where you can take it anywhere. And of course, you've got some capacity to stick things in the back and it's a utility vehicle. You know, again, this one's a V8, so it's not good on gas. I mean, Jeep Grand Cherokees have a reputation for being horrible gas, guzzling, inefficient vehicles. So again, it depends on the kind of vehicle you want to own. But you know, there are V6 models that are much more efficient.

Mark: There you go. If you need some service for your Jeep in Vancouver, BC, the guys to call are Pawlik Automotive. They work on a lot of them. You have to call and book ahead. They're busy. (604) 327-7112 to set your appointment or if you're from outside the region, check out the website pawlikautomotive.com. We have hundreds of videos on there for over the last eight plus years. Or the YouTube channel Pawlik Auto Repair, same thing, all makes models, types of repairs, all kinds of stuff.

You can see us going from goofy to somewhat less goofy. We thank you so much for watching and listening to the podcast. We really appreciate it. Thanks Bernie.