Mark: Hi, it's Mark from TLR, I'm here with Bernie Pawlik, Pawlik Automotive in Vancouver. Vancouver's best auto service experience. 24 time winners of best auto repair in Vancouver as voted by their customers. And we're talking cars. How are you doing Bernie?

Bernie: With an introduction like that I'm doing awesome today. Thank you.

Mark: So we're going to talk about a 2011 Mercedes-Benz C63 AMG. What was going on with this vehicle?

Bernie: This vehicle came to our shop primarily with a concern that the radiator fan would run randomly at any sort of time, like especially when the key was off and it would kill the battery, which is not a good thing. And the owner had previously taken it to another shop, had a number of repairs done, but they weren't able to successfully repair it. So he brought it to us to do it and I'm happy to say we did a great job with it.

Mark: So what testing did you do to find the issue?

Bernie: So there's a few things we looked at. First of all, we did verify the fan was running and the concern was happening. Scanned for codes, tested various components related to what would cause the fan to run. And the first issue we ran into was to replace the Sam modules. Sam stands for signal acquisition module.

Most Mercedes have at least one or two of these. Some have even three depending on the car. But these are basically boxes, they're full of relays and control units and things like that. And the fan was controlled through that unit. A visual inspection of the front Sam, which controls a fan found there was moisture inside the fan inside that unit. So we figured that was a good place to start. We replaced it and had it reprogrammed, which is necessary. But the issue is still continued on. So we had a further diagnosis to do.

Mark: So was it a complicated replacement to change the Sam?

Bernie: It's a bit of work. Not crazy. I mean, fortunately it's pretty accessible. There's a lot of wires to hook up and reconnect, but they're all plug type things. As I mentioned, there is programming involved. The next step in our diagnosis, we of course, tested the fan to see, okay, what was happening with that? We found there was a badly burnt wire to the fan. The previous shop had apparently replaced the fan. So we figured okay, that's in good shape.

What we found was a badly burnt damaged wire between the fan and the ECU or the PCM, powertrain control module. So we repaired that wire thinking, okay, that's going to solve the issue, but it didn't do that. Little further investigating with the client and found that in fact, the previous shop had replaced the fan. That hadn't solved the issue.

The previous shop had also replaced the powertrain control module. Cause there's something going on with that. They replaced the fan, put the fan back in, the old one, but of course he didn't tell us that when he brought the vehicle to us. So what we found out at a later time as we actually had the old fan still in the vehicle.

So we found that there was a defect in the fan and make a long story short, that along with the wiring had actually damaged the PCM. So that needed to be replaced again. So with all that information, we'll look at a couple of pictures. So there's our backend of our C63. This is a real AMG as opposed to some just cause it says AMG on the back doesn't necessarily mean it's real, but if it says C63, then you know it is a real one. 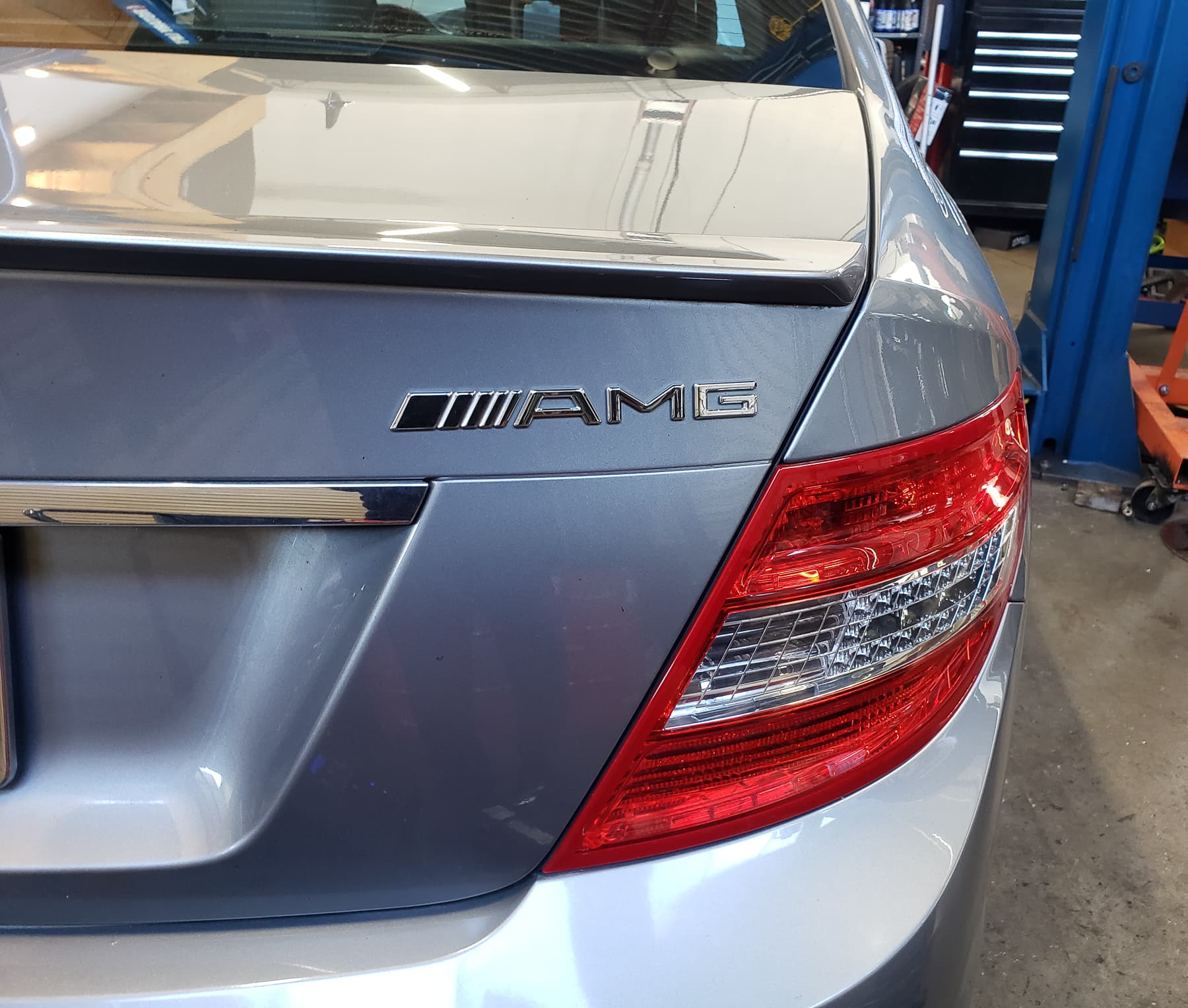 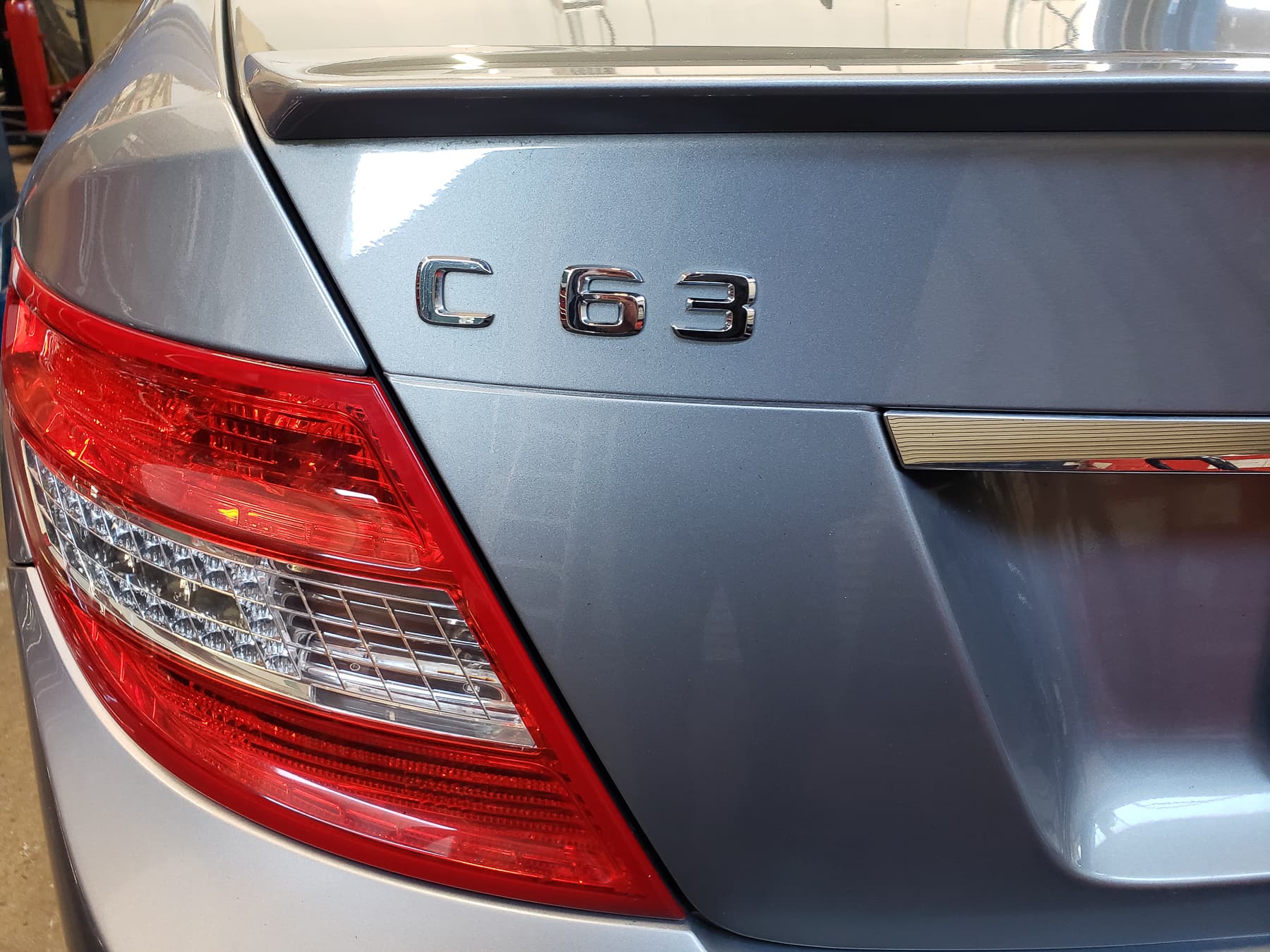 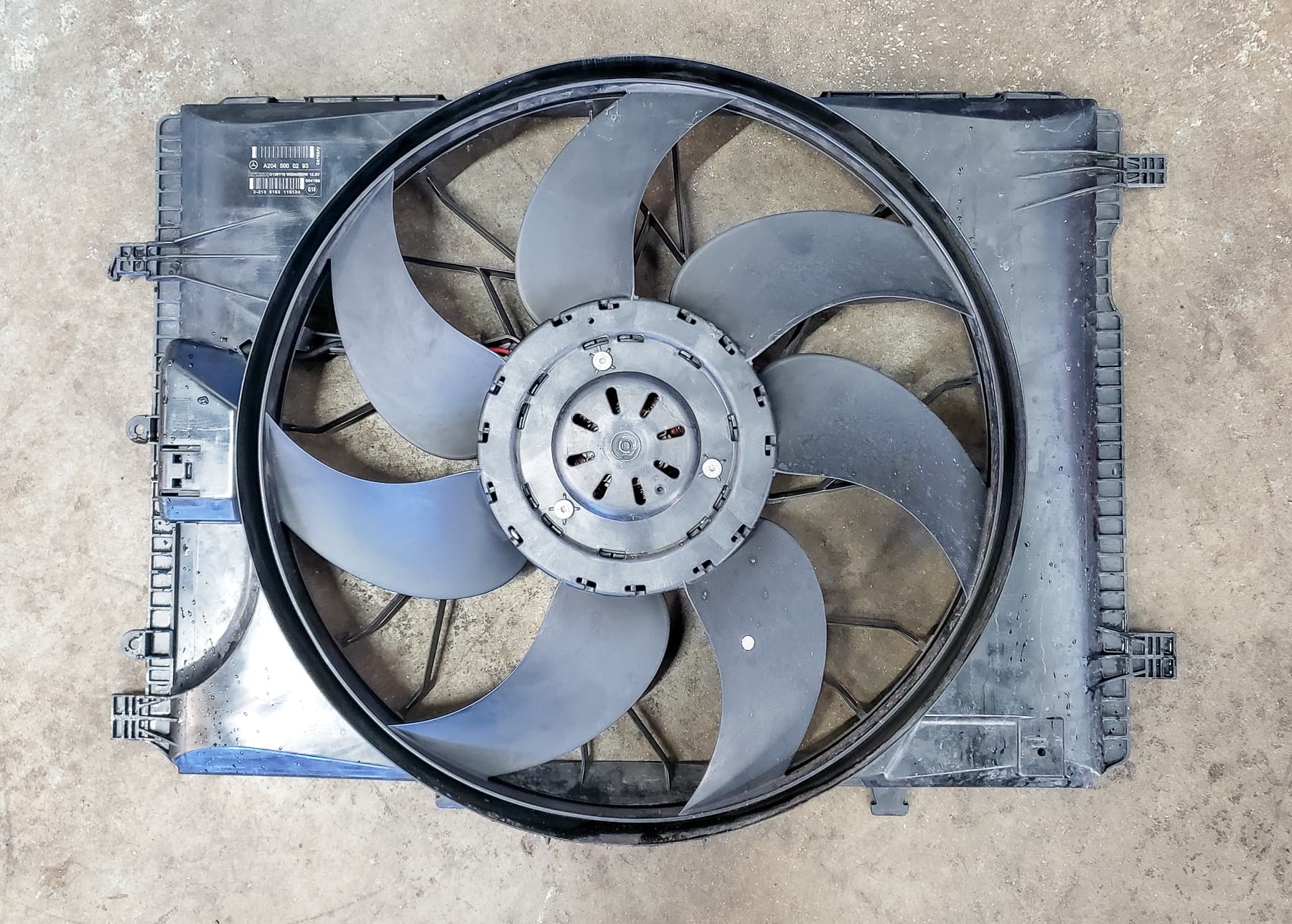 There's the fan unit. And this is basically the culprit of what was going on that basically caused everything to go bad. What happens is these fans can develop an issue and it's important to fix it right away. If you have one of these cars and your fan starts running on, get it fixed right away. Because you leave it too long, this is what caused the wiring to get destroyed and take out the PCM at the same time. So very important if there's an issue, fix it right away. You might save yourself quite a lot of money with just having a fan to replace. 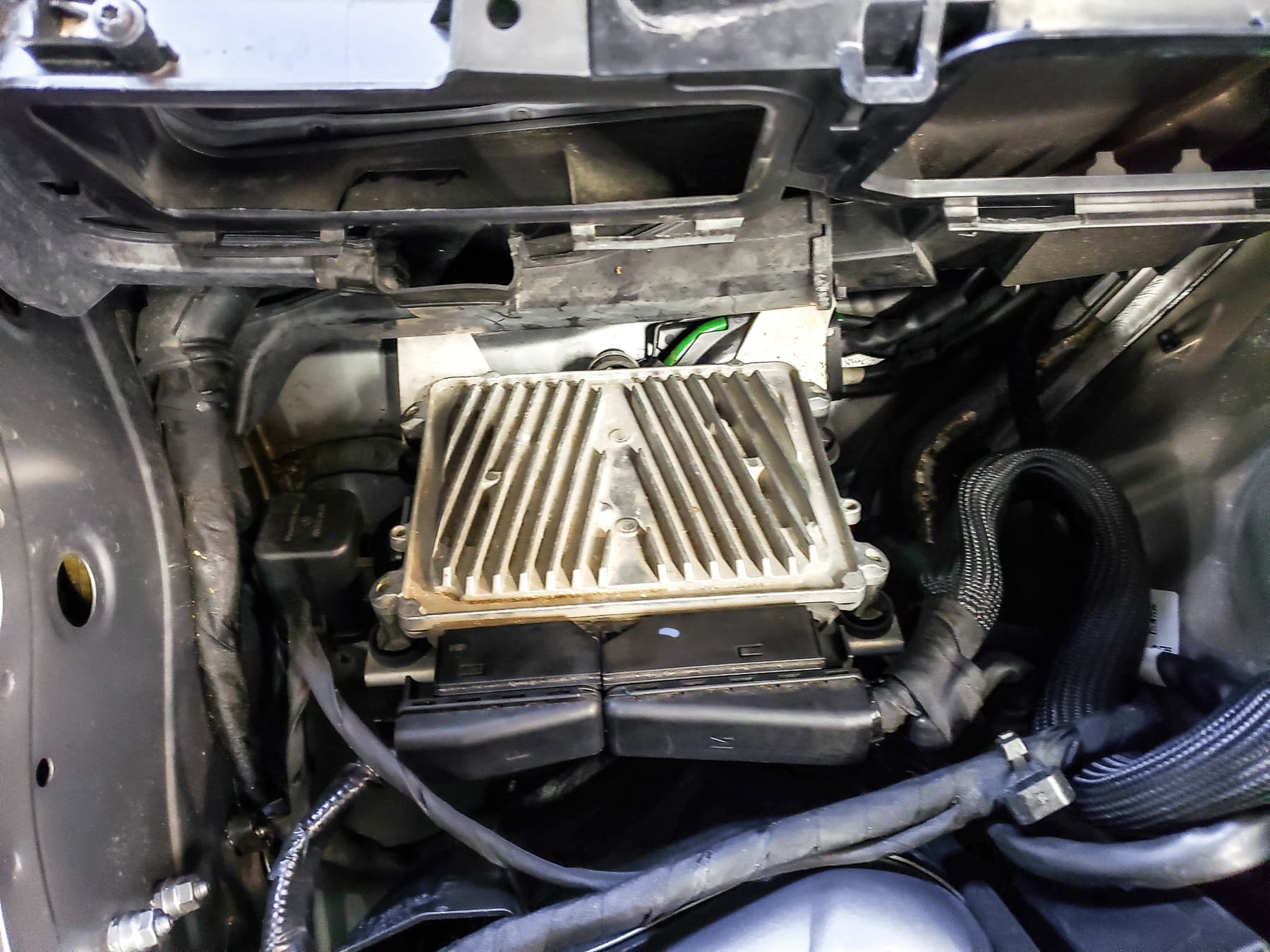 There's a photo of the PCM. This is located in the back passenger side of the engine compartment reasonably accessible, which is awesome. And this unit of course requires some intensive programming as well. So there's our picture show.

Mark: Did you use all new parts for this work?

Bernie: The Sam was new. The fan was new, but the PCM's exceptionally expensive. We're actually able to get a used one and we have someone who can program these units. Which is important because a lot of Mercedes items, once they're programmed for a specific vehicle, you can't use it for anything else. But for this particular model we have someone who can reprogram it. Worked fantastic. Everything worked really well once it was all fixed. Fan came on and off when it was supposed to, and customer's happy. Although it was a very expensive bill and you know, had a previous shop bill too. So it's it was overall very expensive repair, but functional. Working well.

Mark: So how did everything work after all these repairs?

Bernie: Yeah, it was good. Yeah, really good. You know, as I said, the fan switched on and off, like it was supposed to. He didn't have to keep disconnecting his battery every time he stopped somewhere, which is really annoying.

So, as I mentioned, you know, the important thing with issues like this, and this is applies to any car. If you have something that's not operating properly, like a fan that's running on like this, get it fixed before it causes more damage. Had it got fixed early enough, it may have prevented the PCM from being damaged. And wiring as well.

Mark: How common a problem is this on C63s?

Bernie: Well, this is the first one we've repaired, but apparently according to our programmer that we deal with, he's seen it a few times. So if you have one of these cars, watch out for it because it does happen.

Mark: And is this a Mercedes-Benz kind of global issue with electric fans?

Mark: All the vehicles.

Bernie: You know, and actually this is the first, we've done fans in a couple of different models, but I mean this particular issue, I think it's probably more related to this car, but I can't say for certain. But as I said with any vehicle, if you have an issue like this, where the fans running on, make sure you do get it fixed.

Mark: And not to slag off anybody else, but why were you guys able to find the problem and the other shop, perhaps wasn't.

Bernie: Well, I think some times the difference between fixing something and not fixing it, is determination, and having the right resources too. So, I mean, we have good equipment. We don't have everything in our shop, but we also have tech support companies we can deal with to get information, where we can't figure it out ourselves.

And there's plenty of things in the automotive world, not just Mercedes, but any other car where there's just a weird problem that's completely unrelated. And if you don't have the resources to that kind of technical information, you'll never be able to fix it, there's that. Plus we have someone, you know, in our pocket, so to speak that we hire who comes in and does programming. We have a couple of different people actually, and it's proven to be very handy. So these are resources beyond what we can do in our shop. So I think that's really, it sometimes determination, having the right resources.

Mark: If you're looking for your vehicle to be repaired right, especially if it's a Mercedes-Benz, the guys to see in Vancouver are Pawlik Automotive. You can reach them on the website pawlikautomotive.com. You can book on there. They'll call you. They'll find out what's going on. They'll check and see, and get ready for when your appointment is. Or you can call them at (604) 327-7112 to book ahead. You have to call and book ahead. You have to book ahead, period. They're busy. Pawlikautomotive.com is where all the information is.

Our YouTube channel, Pawlik Auto Repair, hundreds and hundreds and hundreds of videos on there. We've been doing this for over 10 years now. All makes and models and types of repairs. That's all on the website as well. You're welcome, please. We appreciate you listening and watching. But we also highly recommend if you're not sleepy, watched our videos, we'll put you to sleep. Thanks Bernie.

Bernie: Thanks Mark. Well, I'm told that actually people find our videos entertaining too. So anyhow, thanks for watching. We appreciate it.