Mark: So a 2011 Mercedes GL, 350 that had air suspension problems. What was going on with this seven passenger SUV?

Bernie: So the owner brought the vehicle to us. He'd had some previous suspension issues repaired elsewhere, but he'd run into some other problems. The rear end of the vehicle was sitting very low and he'd found a few little bits and pieces lying on the ground, which he showed to us.

Some plastic pieces underneath the vehicle, but essentially the vehicle was sitting, you know, on a kind of an upward slope with the backend on the ground.

Mark: Never a good sign when you find plastic underneath your car that looks like it's designed for the car. So what and diagnosis did you do?

Bernie: So, of course first part of our air suspension diagnosis is a visual inspection to just see what the vehicle is doing. Verified, of course that the vehicle back end was sitting quite low, scan the vehicle computer, found a, you know, a number of codes for certain issues, but the really biggest part of the inspection was of course, figuring out what were these plastic pieces and why was the backend sitting low. So we hoisted the vehicle and we found the left rear airbag had basically was blown apart and it had come right off its mounting.

It kind of just clips into place. It's not really held in by anything other than its own, as a bag expands, it kind of mounts in the control arm and in the frame of the vehicle, but it's not really held in. It's lightly held in place at the top, and it'd come out completely out of its spot. And the plastic pieces were parts of the left rear ride height sensor.

So this is, this is what we found was wrong. And also the right rear airbag was completely deflated. So it wasn't blown, but you know, same age as the left side. So we figured, Hey, let's just start with both the rear airbags and get a new ride height sensor.

Mark: So what repairs were involved?

Bernie: Well, let's have a look at some pictures. So there's our Mercedes. This is after the repair of course, sitting nice. But when it was brought in this fender was sitting very low, near close to the tire. 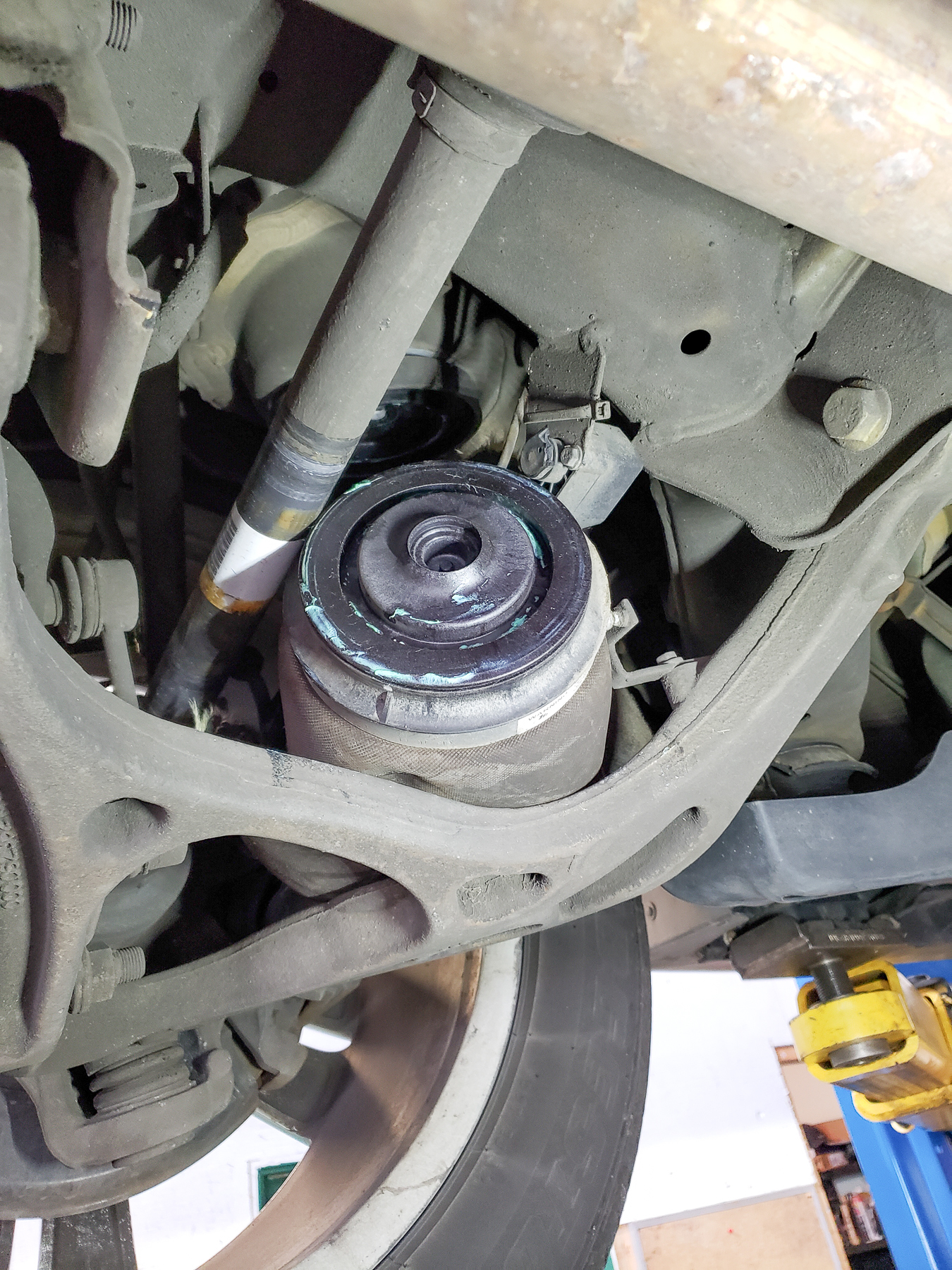 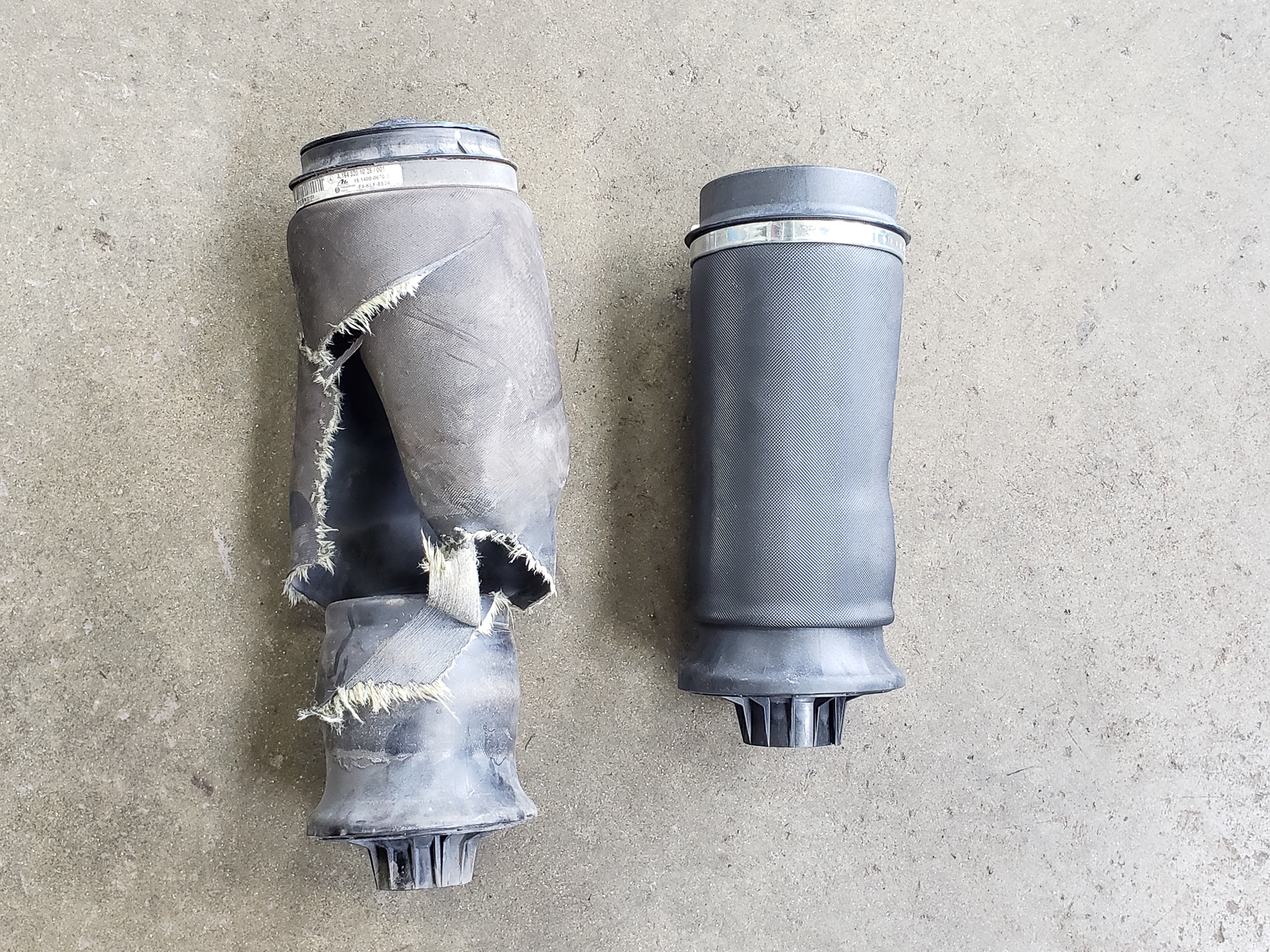 So what repairs were involved? So replacing both rear air springs was needed and also the ride height sensor. This is the ride height sensor right here. And there's a, it's kind of hard to see in this picture, but there's an arm that sticks out off of here. And actually you can see everything. There's an arm that comes off of here. This is snapped off, that connects to a piece like about, about three inches long. It clips up here. So as the spring came off, it just knocked this and broke everything apart. Got another interesting shot here. This is a comparison of the old and the new, and you can, it's pretty clear to see what's wrong with this bag. The thing I wonder about this, did this thing make a really loud boom when it blew up or did it just kind of tear apart? But it's kind of interesting, but this is the bottom part of the air. So this just sits in the control arm and this part here actually does clip up into the frame of the vehicle, but it just kind of holds in place. And as the airbag is inflated, it will sort of mount and hold everything in place.

I mean, another example is the air spring normally sits up here at the top and then at the bottom and I can't exactly, I think it sits somewhere in and around this area. So those are the pieces we replaced.

Mark: Did that solve all the issues?

Bernie: No. Of course, after doing it, then we, start the vehicle up and with our scan tool, we can inflate the system. So it has an air compressor and the system needs to be inflated and everything worked fine on the left side, but the right side airbag would not inflate. So there was some further diagnosis and testing that we needed to do. And what we found is that the air suspension valve block was defective and causing that part of it not to work. So that's the piece.

So this is the other piece we needed to replace. It wasn't evident until we replaced the left side. And this is why we often explain to our clients when we find an issue, we say, okay, this is what we know so far, and this is what we've got to fix first. And often it'll solve everything, but sometimes it doesn't. And in the case of this vehicle, this is what we found.

So this valve block here there's basically five fittings here. And one of them comes from directly from the compressor. Four of these go to the different air springs and you can see electrical terminals here, so that the air suspension computer will gather all its information, how's the vehicle sitting? What's the height? You can also command the vehicle to sit higher. So as the computer receives its commands, it'll send electrical signals. There's air pressure in one area from the compressor, and this will pump up the springs as needed. So there are a number of solenoids. There's at least four to five solenoids in here that will open and close as needed. And this one was defective because it wouldn't allow any air flow from this area. So there's a network of plastic hoses that run through the vehicle that carry the air to the each air spring. So this is the other item that we replaced.

Mark: So you replaced that part? How did it all work from there?

Mark: So are there any, like further concerns or issues with this type of vehicle suspension?

Bernie: Well, so we replaced basically both the rear air airbags or air springs. He'd had the left front air strut replaced previously. And so there's basically the right front was still original. I mean, it was working fine and you never know how long these things will last. I mean, it may last for a couple of years. It might only go for a month. Hard to know. But the other area of concern is whenever you have a leak in an air suspension system is a compressor really gets strained. And it's, I would say that at some point, this compressor will probably need to be replaced sooner than later. Now of course, the vehicle is 9 years old at this point, almost 10 years old. So that compressor's had some pretty good life. But that is something that will likely need to be replaced fairly soon. We've had these vehicles where it's got a blown air strut or rear air spring. We replace it a couple months later, it's in, cause the compressor's failed. So at the present time is working really well. But you never know that does shorten the life. So if you have an air suspension issue, it's always best to fix it as soon as possible to prevent further damage.

Mark: And how are  for reliability overall?

Bernie: Pretty good. I know you could probably find quite a few podcasts about these. So this is the 3 litre diesel engine. There's a number of issues with these engines. We've talked about, I think, you know, really good maintenance is key with these engines. Getting the engine warm, changing the oil frequently. Those are all important things, but there are a number of things that do go wrong with them that are expensive. And of course the air suspension system is another issue. And that's, you know, with this particular vehicle, you know, you can, by the time it's 10 years old, count on having to replace, you know, a number of the air springs and struts and compressors, those kinds of things. So nice vehicle overall, but you know, they are expensive to maintain.

So there you go. If you're looking for service for your Mercedes-Benz in Vancouver, the guys to see are Pawlik Automotive. You can reach them at (604) 327-7112 to book your appointment. You have to call and book ahead they're still busy. Check out the website pawlikautomotive.com hundreds of articles on repairs of all makes and models, cars and trucks. Same on the YouTube channel Pawlik Auto Repair. Thanks for watching. Leave us a review. We'd really appreciate it and thanks, Bernie.

Bernie: Thanks, Mark. Thanks for watching and listening. We totally appreciate it.