Mark: So today's victim is a 2011 Mini Cooper S model that had a blower problem. I didn't know that they had to superchargers on Minis.

Bernie: Well, they actually do. But this wasn't actually the blower that you're thinking about, the supercharger blower. This is a non supercharged version. And this was actually the heater blower fan inside the vehicle, that was the issue.

Mark: So what sort of testing and diagnosis did you have to do?

Bernie: Yeah, so the client's complaint was a heater blower motor didn't work at any speed and the owner had checked the fuses and found that they looked good. It's a good thing. Kind of the only thing you can really look at yourself to just see if there's anything wrong. Of course, if a fuse is blown, there's usually a reason for it. They don't normally just blow for no reason, but sometimes you get lucky and you find a fuse and fix it, and it solves a problem, but not very often.

So testing and diagnosis, of course we do test the fuses. We hook up a scan tool to the vehicle computer. From there we can actually look and access the climate control system. We can turn the fan switches on. We can see if the switches are actually sending signals to where they're supposed to be, at least based on the computer. And then we verified that that was in fact happening. So we knew the switch and the panel was working. From there, we had to get down and do some testing inside the vehicle. So we have to pull some paneling off. Test the power flows to the heater motor resistor, the heater blower resistor to the actual fan motor itself.

Bernie: We found the blower motor was dead. So as I said, there's a couple of things that can cause these issues. One can be the fan panel. It could be a wiring problem. The heater blower resistor is a common issue as well. But in this case, the blower motor was the culprit.

Bernie: So in order for the fan to work on different speeds, they put in a blower motor resistor, or nowadays maybe more of a control module, but it resists the current flow to the motor so that you can operate the fan on different speeds.

If you actually ran it through a switch, it would be a much more complex and require a lot more wiring to do it. So it's better just to do it through a resistor. So that is a common failure item. But again, in this case, it was good. But it's basically a companion to the fan motor. Otherwise it would only work on one speed.

Mark: So is it a difficult job that changed the blower motor?

Bernie: Well, as far as blower motors go on cars, this wasn't too difficult. I mean, it was our technician of course, found that it was hard on his back because you've got to lie underneath the driver's side of the car. It's very fiddly to get it in and out. But the good news is you don't have to tear the whole dash apart to do it. So most blower motors are generally not too difficult, but there are some cars that require, you know, more than a day's work to pull them in and out. So the owner's never liked that too much.

Let's get into a couple of pictures here. 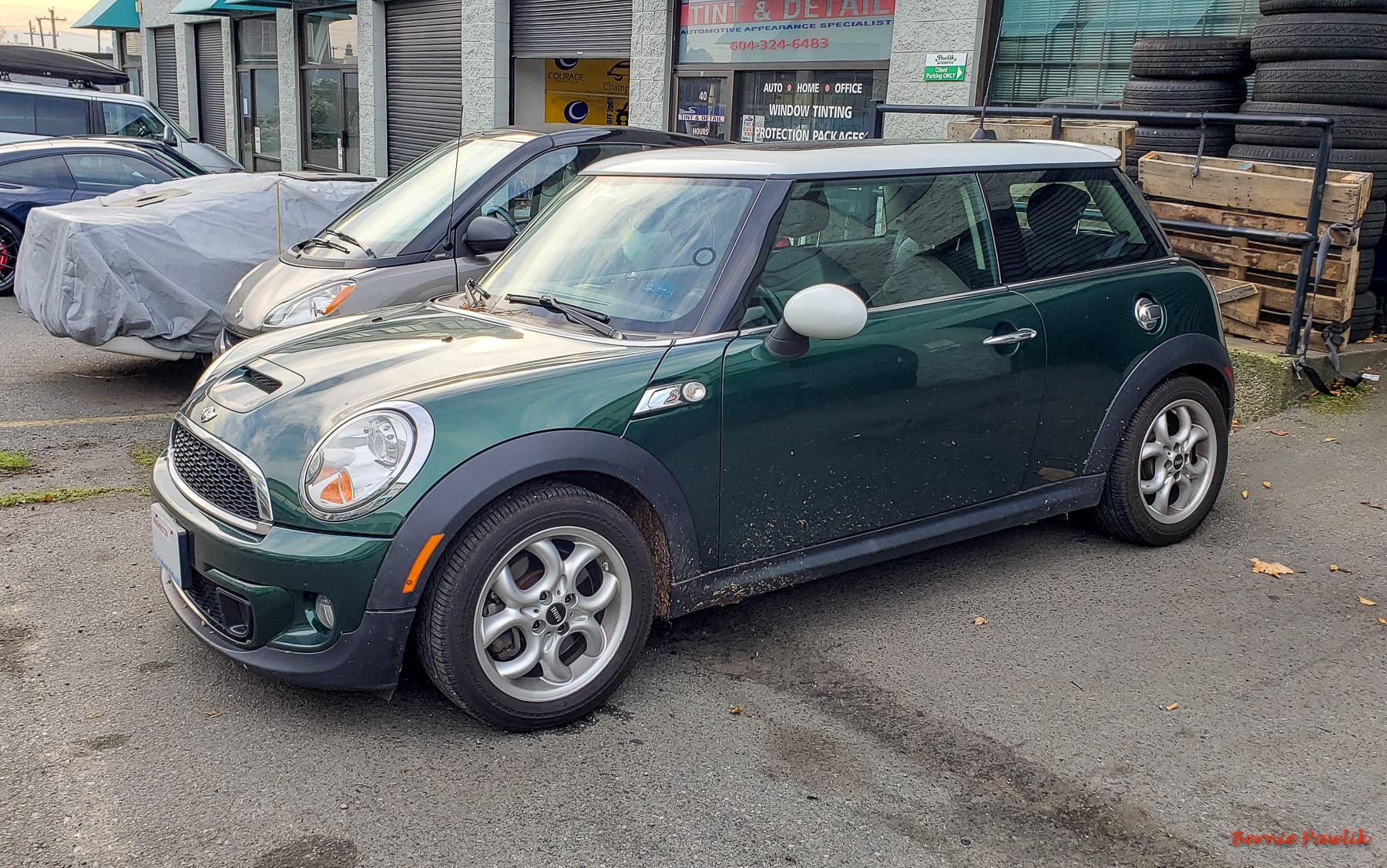 Followed by the blower motor. So this is the new motor. This is called a squirrel cage. It's kind of looks like a running wheel for a rodent to run around on. But it's basically a fan. This is a piece that spins right here when you turn the fan on. The actual motor's in this section here, of course the wiring connector here. 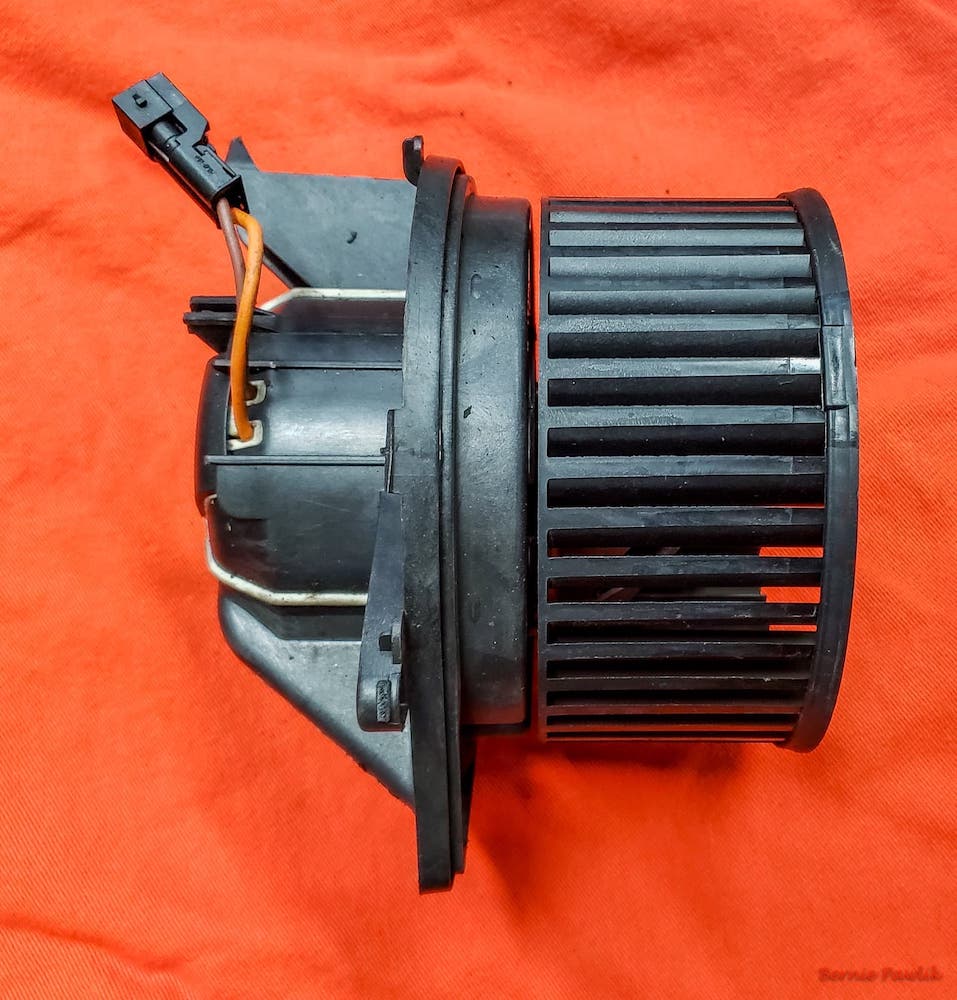 We can just look at our other view here. 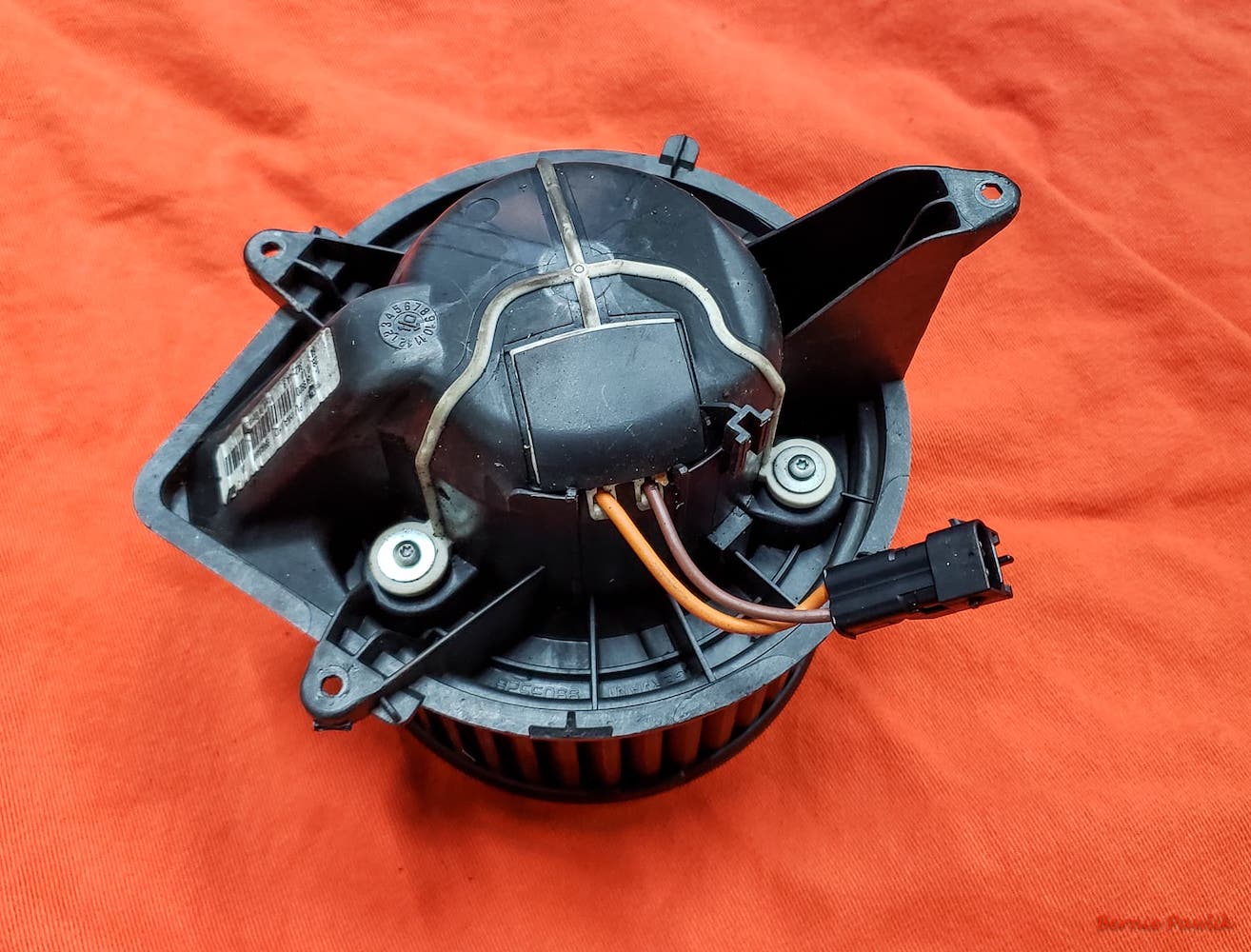 This is the backside, basically the blower and three attachment screws that hold it in place. This is the new unit that we put in. Actually no, this is is actually the old one.

Mark: Ah, so did you notice anything that was wrong with this motor?

Bernie: Well, we actually did when we actually pulled the motor out to turn that squirrel cage, usually it's super easy. There's almost no resistance whatsoever. This one was tight to turn. So something had seized up in the motor and caused it to die. So maybe a bearing seized up or something else gave way inside the motor. But it didn't have a rough spot, it was just difficult to turn. So eventually whatever happened, maybe a bearing seized up in the motor just burned itself out.

Mark: So is this a common repair on Mini Coopers?

Bernie: We haven't repaired a lot of them, so it's not really super common. We do work on a lot of Minis. Nothing more than any other vehicle. I mean, a blower motor does generally die eventually on any car, but it's not any more than average on a Mini.

Mark: So how are these BMW version of a Mini Cooper for reliability?

Bernie: Well, I don't know if they're any less or more reliable than the old original version of the Mini. They probably actually are better because old cars are just not very, they had a lot of breakdowns and tuneups and things that were needed. But they're generally pretty good, but they are a more expensive vehicle to fix.

It's a nice car for sure. It's a fun little zippy car. But you will spend more money fixing it than you would for a smaller Japanese car, but it's kind of a unique vehicle and certainly a lot more fun. So there's a little price to pay, but it's a good car overall.

Mark: And you have the extra benefit of it not being an old version of a Mini, which I went O for the summer when I had that vehicle. Girls did not like that car.

Mark: So, if you're looking for service for your BMW or your Mini or Mini Cooper or Mini Cooper S in Vancouver, the guys to see are Pawlik Automotive. You can reach them by phone at (604) 327-7112 to discuss what's going on with your vehicle. Or you can book your appointment on the website pawlikautomotive.com. They'll get back to you. Again they'll check out what's going on. They'll be ready for you when you show up. You have to call and book ahead. They're always busy.

Check out the website, pawlikautomotive.com. Hundreds of videos, all makes and models types of repairs. And of course, YouTube channel, Pawlik Auto Repair, same thing. All the videos are up there. Thanks so much for watching and listening, we appreciate it. Thanks Bernie.

Bernie: Thank you, Mark. And thanks for watching and thank you for listening.