Today’s featured service is Exhaust Gasket Replacement on a 2011 Nissan Versa, brought to us by a client from Kitsilano, Vancouver.

While an exhaust gasket replacement seems like a rather ordinary, run of the mill repair, and something hardly worth a mention I found a rather humorous reason to write this post.

Over the years there have been jokes floating around about parts that don’t exist, the kind of blatantly obvious parts that couldn’t possibly exist but you could tell someone they needed and they’d never know the difference. In the carpentry trade it’s the elusive lumber stretcher (a tool). In the automotive trade one such part is the muffler bearing: a part that couldn’t possibly exist because bearings are only used on moving parts; and mufflers or exhaust systems of which they are a component, have no moving parts.

While the joke of this phantom part has floated around for years, imagine my surprise when an exhaust gasket arrived from the Nissan dealership and was called a bearing on the invoice. The muffler bearing was real; sort of. I would hardly call this a bearing in the sense that we think of it on a car, however from a different definition of the term, calling this part a bearing is appropriate. 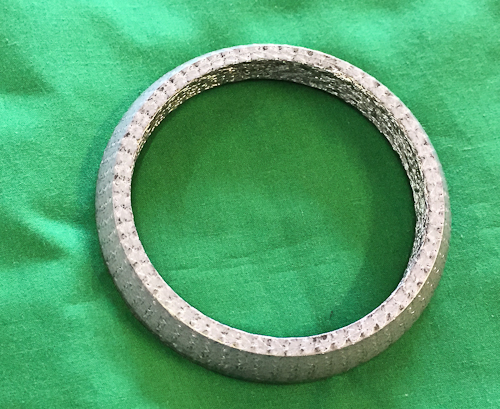 Exhaust gasket for 2011 Nissan Versa. This is the “bearing” as it is described on the invoice.

All joking aside this Nissan Versa came to our shop with exhaust so loud that it almost sounded like a noisy sports car. We determined that the cause was a worn out exhaust gasket between the manifold and the header pipe. At this point the gasket used is somewhat special as this is a flexible joint. The fact that this gasket was worn at this car’s young age and mileage (60,000km) was likely due to being an Ontario car. Road salt and harsh winters definitely shorten the life of many components “muffler bearings” included.

For more about the Nissan Versa click here http://en.wikipedia.org/wiki/Nissan_Tiida