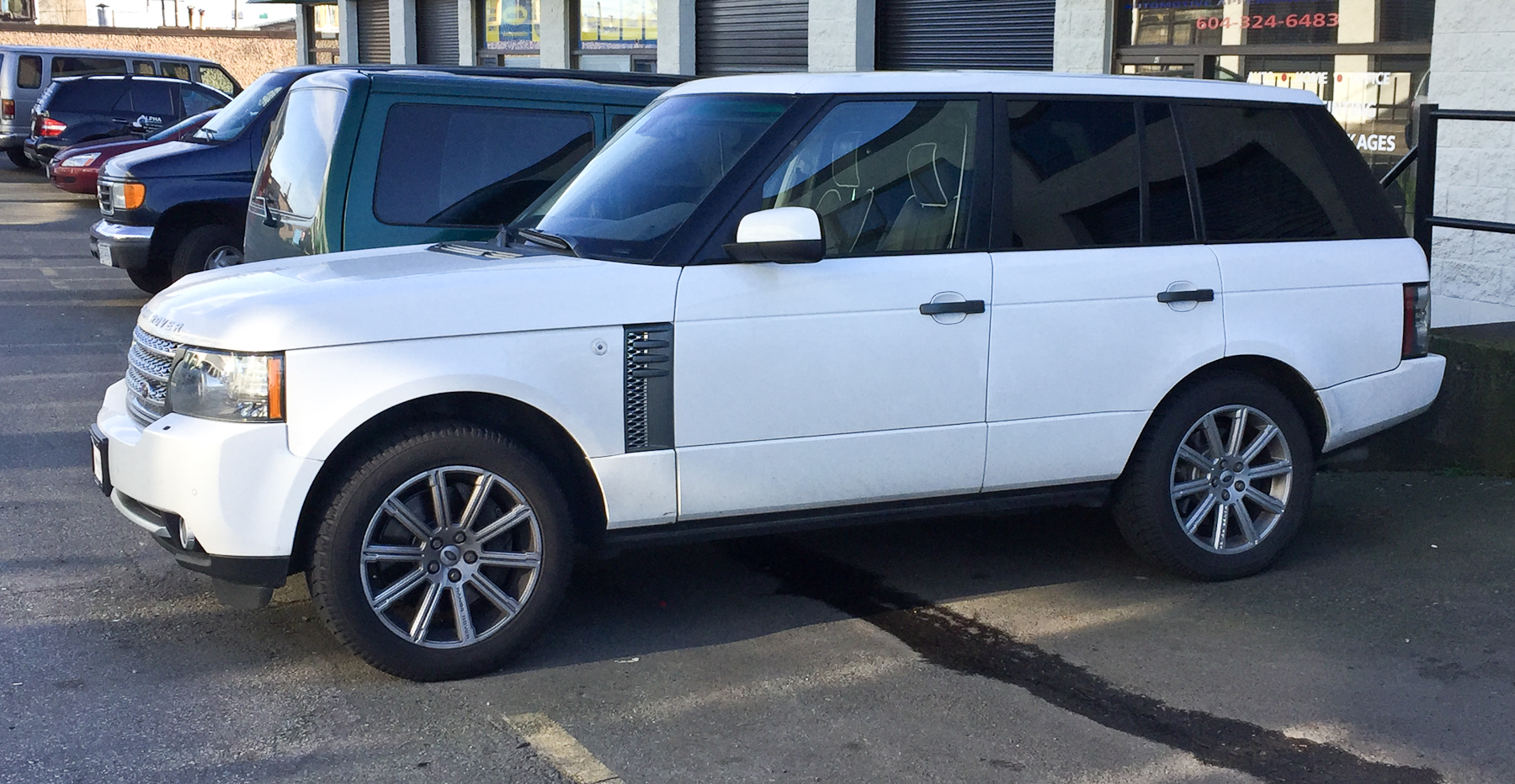 Bernie: Well, this particular Range Rover had a warning light on the dash for an ADS system fault. It shows a little symbol that looks like the vehicle with curved arrows that looks like its rolling. So that’s what was going on with this vehicle.

Bernie: ADS stands for Active Damping System and it’s basically a fancy term for the electronic shock absorbers. What they do on this vehicle: it has air suspension for the springs so you can vary the height of the vehicle, but for stability control it uses active damping suspension. The shock absorbers are electronic. The active damping control adjusts the suspension depending on what you need: if you’re on a bumpy road it’ll adjust it a certain way, if you’re on a smooth road it’ll adjust it a certain way and also if you’re going around a corner and the vehicle starts loosing some stability, it’ll beef up the shocks, tighten them up, whatever is needed. So it’s all part of the stability control of the vehicle and just the overall ride and effect.

Mark: So what did you find with this vehicle?

Bernie: What we found with this vehicle: the first step, is to connect our scan tool and see what kind of information we get out of it and what we found was a trouble code stored in the system (which there always is when the light is on). It was for a fault with the right front damping sensor. I don’t have the exact code written down in front of me, but there was a fault with that part of the system. So we did further diagnosis and what we found was a broken wire to the active damping solenoid, located at the top of the shock absorber. Now I’ll share a couple of photos here because these are very telling, now lets just get into that - so - this is our Range Rover here and here’s the wiring. Now this picture here, on the left hand side is the old wire that we removed, we basically had to replace both front shock wires because although the wire on the right hand side was actually broken, the one on the left was about to break and I’ll show a close up photo of that one later. On the left hand side is the original wire, you can see it’s been cut off, if you look on the right hand side where it goes over top of the other wire, it’s been cut off of the original wiring harness and the new wire is sheathed in plastic all the way from the rubber piece, there’s a rubber piece near the connector, it’s sheathed in a thicker plastic. The other wire, you can see it is wrapped in electrical tape and I’ll just get into the next slide - this is a close up of the broken wire or the almost broken wire. So the left hand side was still functioning but it wouldn’t be long before this wire broke and caused a failure. So again, if you look back here to this picture, I don’t know if my mouse pointer actually shows here, but that’s where that picture was taken. So that’s the wire that we replaced on both sides. Land Rover has an updated part that they sell that works a lot better. You can see that thicker sheath around the wire, it should last for substantially longer. This whole issue is part of a TSB - Technical Service Bulletin put out by Land Rover, obviously something they had a problem and they’ve upgraded the design of it and there is readily available information on how to repair it and new, upgraded, expensive parts to fix it. 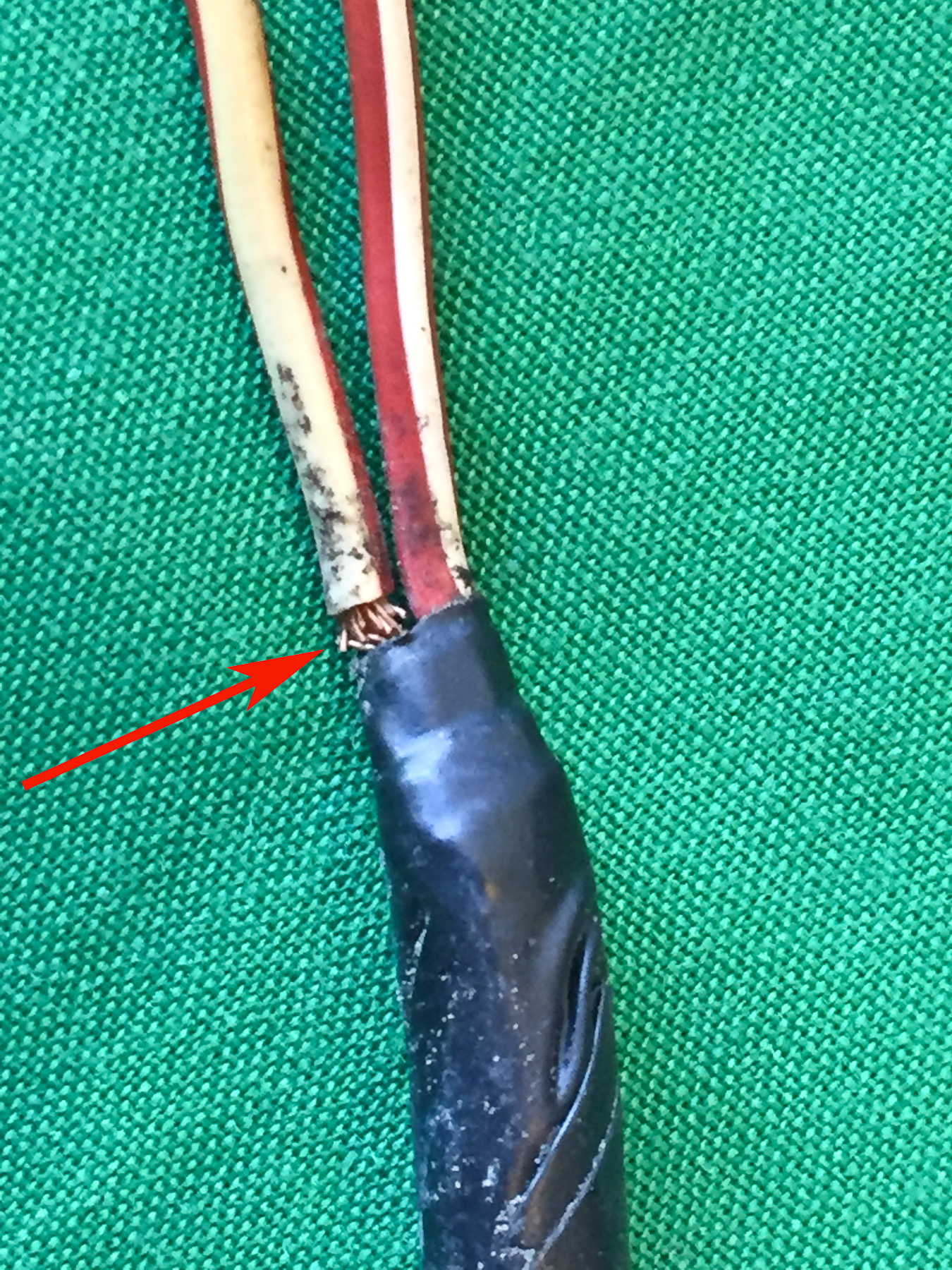 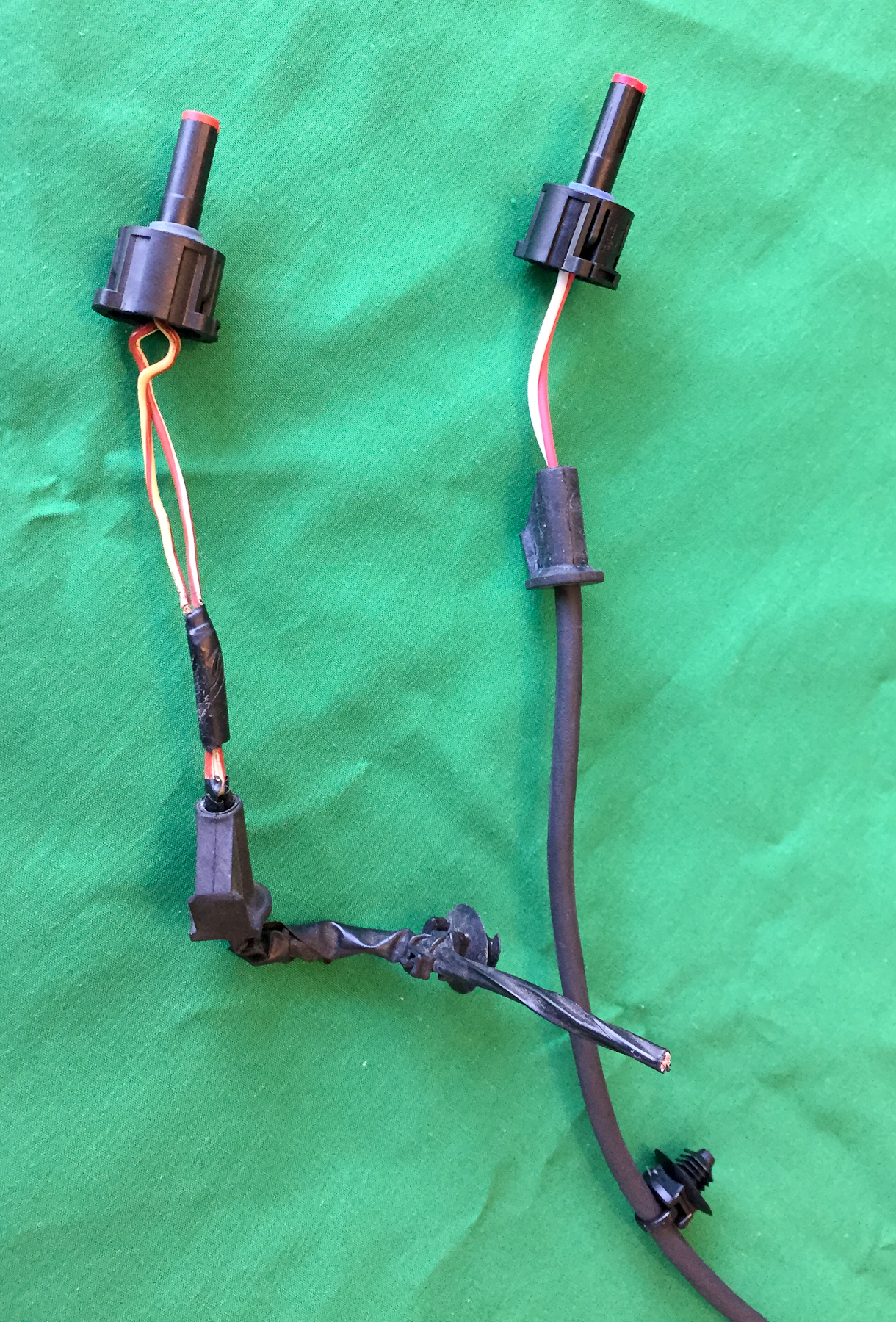 old harness connector on left and new connector on right. Note the thick rubber cover over the wires, This is a much more robust part that should last for many years.

Mark: So wouldn’t this be a safety recall item?

Bernie: Well I guess not and I don’t know exactly what the criteria is for creating a recall as opposed to just a TSB but obviously it’s not enough of a safety issue to create a recall. While driving the vehicle with the light on, there wasn’t any noticeable difference in how the vehicle handled but I’m sure that under certain circumstances there would be. But it’s nothing like the vehicle is going to accelerate or you’re going to loose your brakes or suddenly go around a corner and the vehicle is going to drop and you'll lose control. It’s nothing like that. That might be the criteria but it does make you wonder when a part is so clearly, badly designed that they wouldn’t at least offer a complementary warranty for the first few years. The vehicle is a 2011, it’s only five years old at this point. It’s really a kind of part that should of been built better but now that we’ve fixed it, it should never be an issue on this Range Rover again.

Mark: So if you’re looking for expert help on your Range Rover or any of your vehicles, these are the guys to go see - Pawlik Automotive - give Bernie a call 604-327-7112 or check out their website, tons of information there pawlikautomotive.com. Thanks Bernie