Mark: So a VW, 2011 Golf that had a problem with the brakes, a brake light warning. What was going on with this Volkswagen?

Bernie: Yeah. So the customer brought the vehicle in, there's a brake pad warning light on the dash. So obviously he was concerned about that and that was his primary concern with the vehicle. Stopped okay. But there was a warning light on.

Mark: So what kind of diagnosis and inspection procedure did you follow to find out what was going on?

Bernie: Well, it's always important when someone comes in with a warning, light to determine what the actual warning light says. And in the case of this vehicle, it says brake pad warning. So on this vehicle, there's only one brake pad that has aware sensor on it. That's the front left. So that's a pretty good indication that there's something either wrong electronically or the actual brake pad is worn out. Brake pad warnings are usually a European car thing. Some cars have, you know, a sensor on every wheel. Some have just one, like this, Volkswagen, some have like one sensor per axle. So it's not an exact warning on each pad, but I'm trying to think, there's actually a couple of cars that actually have a sensor on every brake pad, which is, you know, that gets to be pretty accurate at that rate.

Anyways from there, an inspection. We do a regular brake inspection like we do on any car to determine, you know, the condition of the brakes. You know, how thick are the pads, how are the rotors, did the calipers retract properly? What are the conditions of the brake hoses and fluid and so on. We look at all those items and then determine what the vehicle needs.

Mark: So how did that lead to a rear caliper being replaced?

Bernie: Yeah. So I'm talking more about the rear caliper on this vehicle. I mean, there were other things that we changed that we've discussed in other podcasts.

The front brake pads and rotors were worn out and needed to be replaced. That was one of the primary issues. We found on the rear brakes, there was about five to six millimetres left on the rear brake pads. We've got a slight uneven wear, but that's still a fair bit of material. But what we noticed when we visually inspected the brakes before we took the caliper off. As we could see, the right rear caliper dust seal had been twisted pretty badly. And we figured that at least we should do a service on the back brakes to clean and lubricate it and, you know, reestablish the position that dust seal before things get worse.

Mark: So how does the rear dust seal get twisted?

Bernie: So on these brakes, when you do a brake repair, you basically have to retract the caliper piston. And normally that happens by just squishing the piston back into its bore with pliers or special tools. But this is a parking brake on the rear brakes, and that requires the caliper piston to actually be rotated with a special tool. So somebody probably rotated it. They didn't either lube the end of the dust seal or they just allowed it to get twisted while they put it back in. There's a bit of friction that happens and that's what created the damage to the dust seal.

Mark: So that doesn't sound like such a big deal. Maybe. Why did that lead to a caliper replacement?

Bernie: We'll get into some pictures right now. With the twisted seal, what happens is it allowed the seal to crack and let water into the caliper and freeze up the piston.

So let's have a look at a couple of pictures. So here's our 2011 VW Golf. And our caliper piston. So this is a view of the caliper here, this dust seal, and I didn't take an after picture, but this is the before, this is supposed to be a nice seal. It covers over this whole area from here to here, and you can sort of see, it doesn't look like it sits properly. 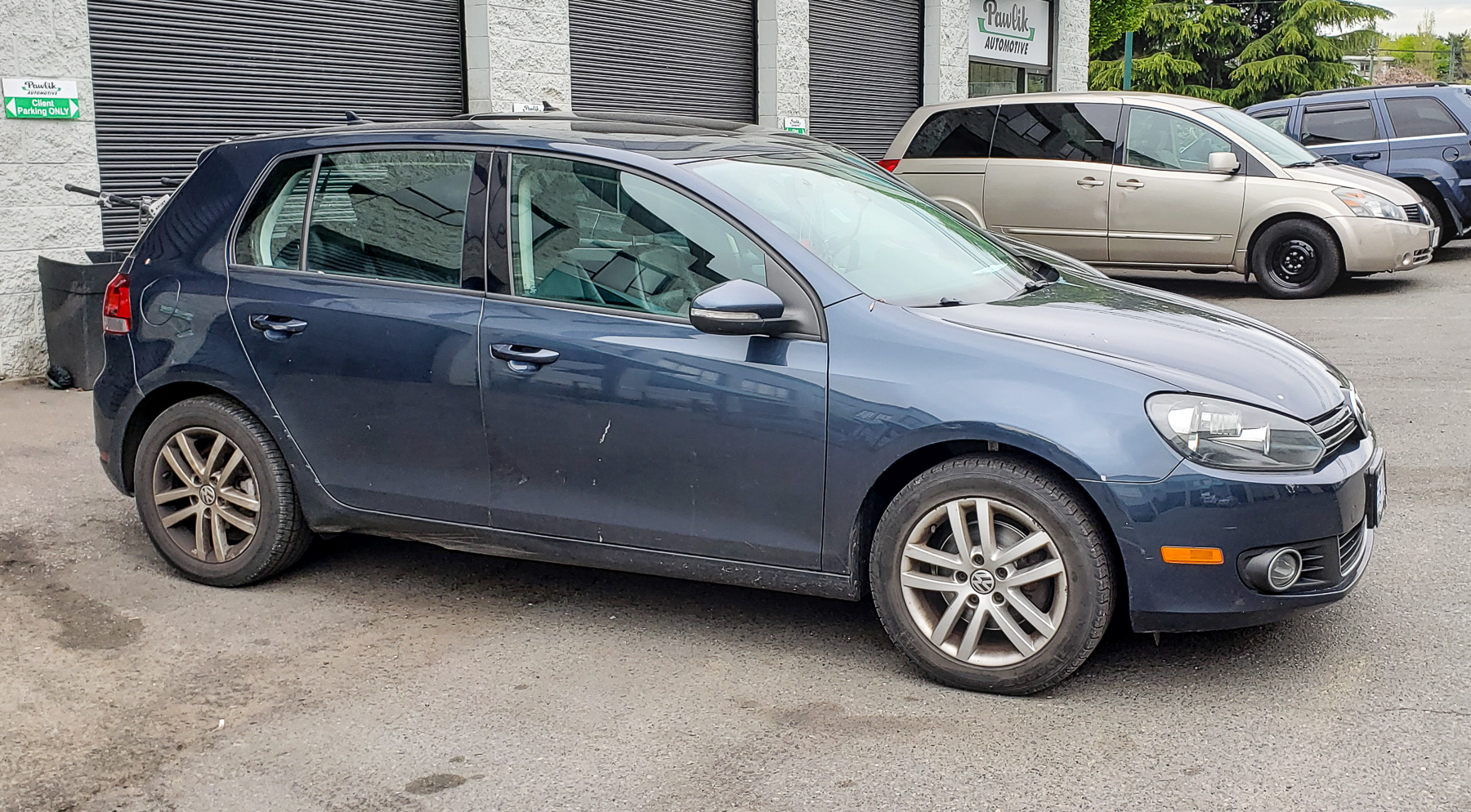 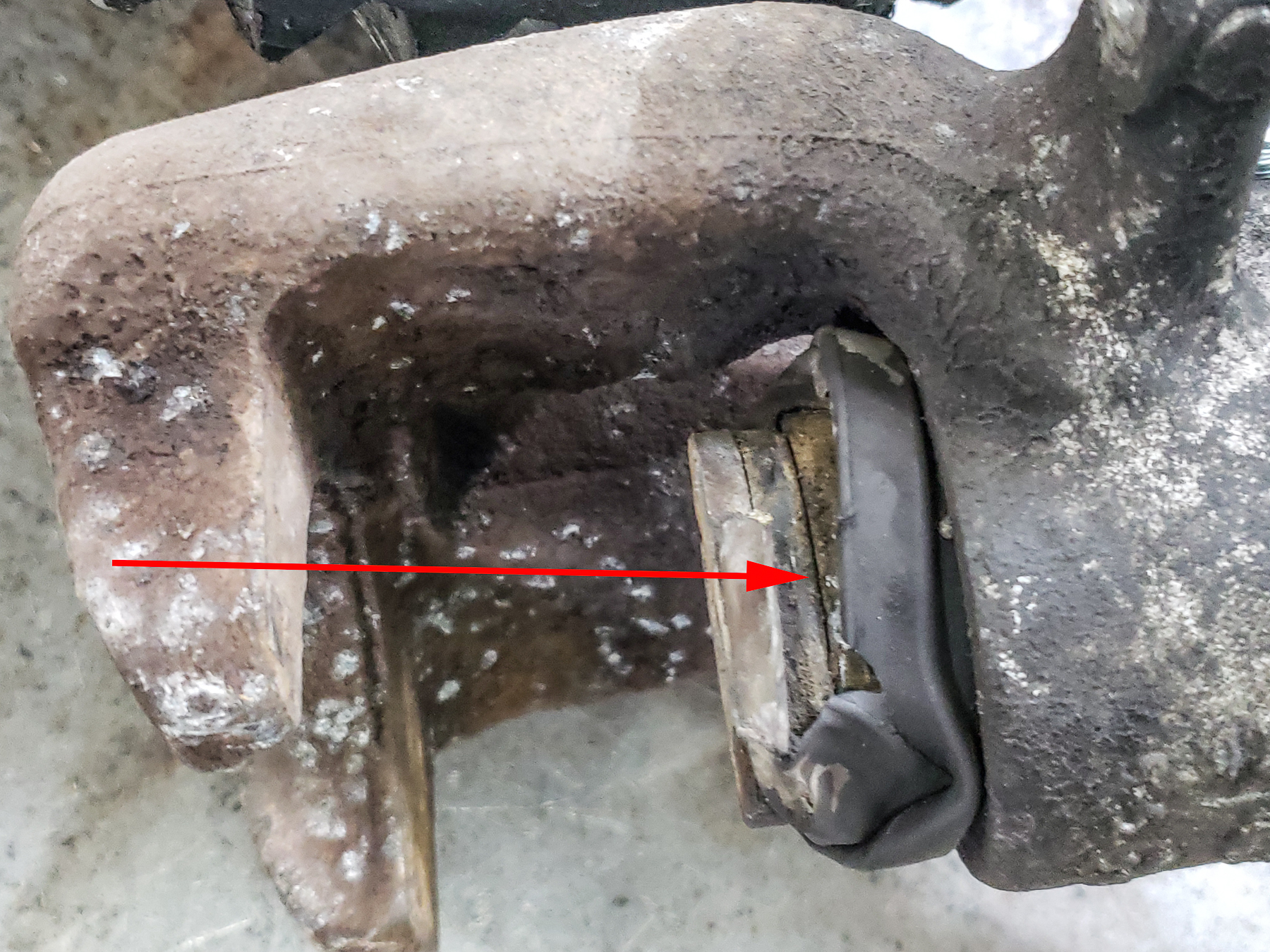 And inside here there's rust and that is supposed to be covered with this dust seal and no moisture or rust in that area. So as that happens, this piston starts to seize up in the bore and cause the brakes to wear unevenly. So that's why we ended up replacing the caliper.

Mark: How serious an issue would of this been over an extended period of time?

Bernie: Well, what would happen if we hadn't done anything with it, is the brake would start to wear rapidly as the caliper piston seized up. Calipers will sometimes just seize without sort of warning that, you know, all of a sudden you're driving and your brakes start getting hot or smoking in a really extreme condition.

So that's what replacing the calipers, you know, like in this case, is all about. Preventing that kind of thing from happening. So it can be pretty serious. Once we noticed that kind of issue is happening, it needs to be addressed.

Mark: And how often on a Golf are brake calipers replaced?

Bernie: Not often. This vehicle has about 200,000 kilometres, so it's a pretty high miler. And these were definitely the original calipers. So they've got a pretty good long life. Most brake calipers do tend to last a long time, but it depends from car to car.

Mark: So might we assume or guess, that they had a problem with their parking brake and somebody tried to monkey with it and fix it and didn't exactly, weren't experts in doing it.

Bernie: I would say not necessarily with the parking brake. With the regular brakes. I'll just get back into this picture here for a second here. As I mentioned, the caliper piston has to be twisted back in. And this isn't a greatest view. But if you look on the front face of this caliper, there's usually a couple of little holes and there's a special tool that will actually press this piston, you rotate it and it presses the piston back in, in this direction that I'm moving the mouse pointer back into the caliper bore. That needs to be done when you do a brake job, because as the pads wear, the caliper piston moves out in this direction. So when you put new rotors and pads in, then the caliper piston of course has to be moved back.

So what I think is more likely, is whoever did the last brake job just wasn't really very careful to make sure this dust seal sat properly and that's what caused it to wear out. I mean, dust seals will crack and break with age, but the way we found this one, of course there was definitely some other underlying causes.

Mark: So this wasn't the first break job?

Bernie: No, definitely not. But 200,000 kilometres was a long time, but I know you've owned a Volkswagen product. This was a standard transmission you can get a lot, as you well know, you can get a very long life out of brake pads and rotors on these kinds of Volkswagens. They last for, I know that your Jetta had 130,000 kilometres when you moved on. Somewhere around there. And I remember the brakes were still in very, very good, the pads were probably still eight millimetres thick, which, you know, at that rate it probably would have lasted 300,000 kilometres. Although something would have probably seized up or corroded by then. But you know, they were still on a trajectory to a long life.

Mark: And how are VW Golf's for reliability?

Bernie: They're good, decent cars. They have a few quirks and things here and there, some engine issues with certain models, but otherwise, you know, a pretty good car.

Mark: Stay away from the diesel.

Bernie: Yeah. Well, I mean, the diesel is reliable, but we know that they weren't exactly forthcoming with their emission specs. So you're polluting more than you know, if you're buying it for a clean diesel, you're not really that clean.

Mark: So there you go. If you need service for your VW in Vancouver, from experts, the guys to call are Pawlik Automotive. You can reach them at (604) 327-7112 to book your appointment. Even now, they're still busy. They have a smaller crew right now. Some people have been laid off because of other requirements that they needed family-wise and, hey, it's still busy enough that you've got to book ahead. So 327-7112 to book your appointment in Vancouver. If you need to check out what's going on, check out the website, pawlikautomotive.com. There's hundreds of blog posts and videos on there over the last almost 11 years. As well, the YouTube channel Pawlik Auto Repair. Again, hundreds of videos on. They're all makes and models of cars and types of repairs. Thank you for watching. We really appreciate it and thank you, Bernie.

Bernie: Thank you, Mark. Thanks for watching. Always a pleasure.