Mark: Hi, it's Mark from Top Local. I'm here with Bernie Pawlik, Pawlik Automotive in Vancouver. Vancouver's best auto service experience. 23 time winners of best auto repair in Vancouver as voted by their customers. We're talking cars or trucks in this case. How are you doing Bernie?

Mark: So what, how do you test and diagnose that once it, once the vehicle's in the shop?

Bernie: Oh, it was a few things. I mean, the first thing we did was sit in the vehicle and test the heater controls on the dash and see how things were operating and everything seemed to be in good order. So our next step was to look under the hood and see, you know, check the coolant level. And we found the coolant level in the overflow tank was down a bit, not empty, but down below the full level.

And did a little further testing, did a cooling system pressure test because the level is down and found a leak from one of the heater hose connections, right at the heater core. So figured just that little lower level of coolant was enough to cause the heat not to work. And that's not an uncommon issue.

If you have a vehicle where your heat's not working, checking your coolant level is definitely a good first thing to do. I was surprised that this didn't have a warning light on the dash because I would assume most of these vehicles of this vintage and being a platinum model as well, should have had a warning light, but it may be that the level was not quite low enough, or it might be that this vehicle isn't equipped. I should probably know that doing this podcast, but I don't.

So if you have a Ford F-150, check your owner's manual and see if that actually has a warning light to that kind of thing. For low coolant level, I for low coolant level. Yeah. That's an important thing to heat. And, you know, had that light been on the first thing, we probably would have done those, pop the hood and looked at the cooling level, but you know, we just take things in sequence.

Mark: So how sensitive, like coolant levels dropping. Is there any normal reason in regular use that that would just go down or is there always some sort of problem that's causing that?

Bernie: Well, always a problem. Unless you have like a 1960s vehicle that doesn't have a contained overflow tank cooling system, because those will actually blow a bit of coolant out as the engine warms up and the level will sometimes drop. But yeah, coolant levels should never go down. So it'll go up and down depending on temperature, but it'll always stay between, you know, a low level and a high level. So if it's actually disappearing, you've got a leak somewhere.

Mark: So what repair did you actually end up doing?

Bernie: Yeah, so we ended up replacing one of the heater hoses. There's a connector and I'll just get into some pictures right now. So there's our F150, it's a platinum edition.  This is like a top end model. Nice wheels, tires, you know, fancy interior though, the whole nine yards. It's a nice pickup truck. 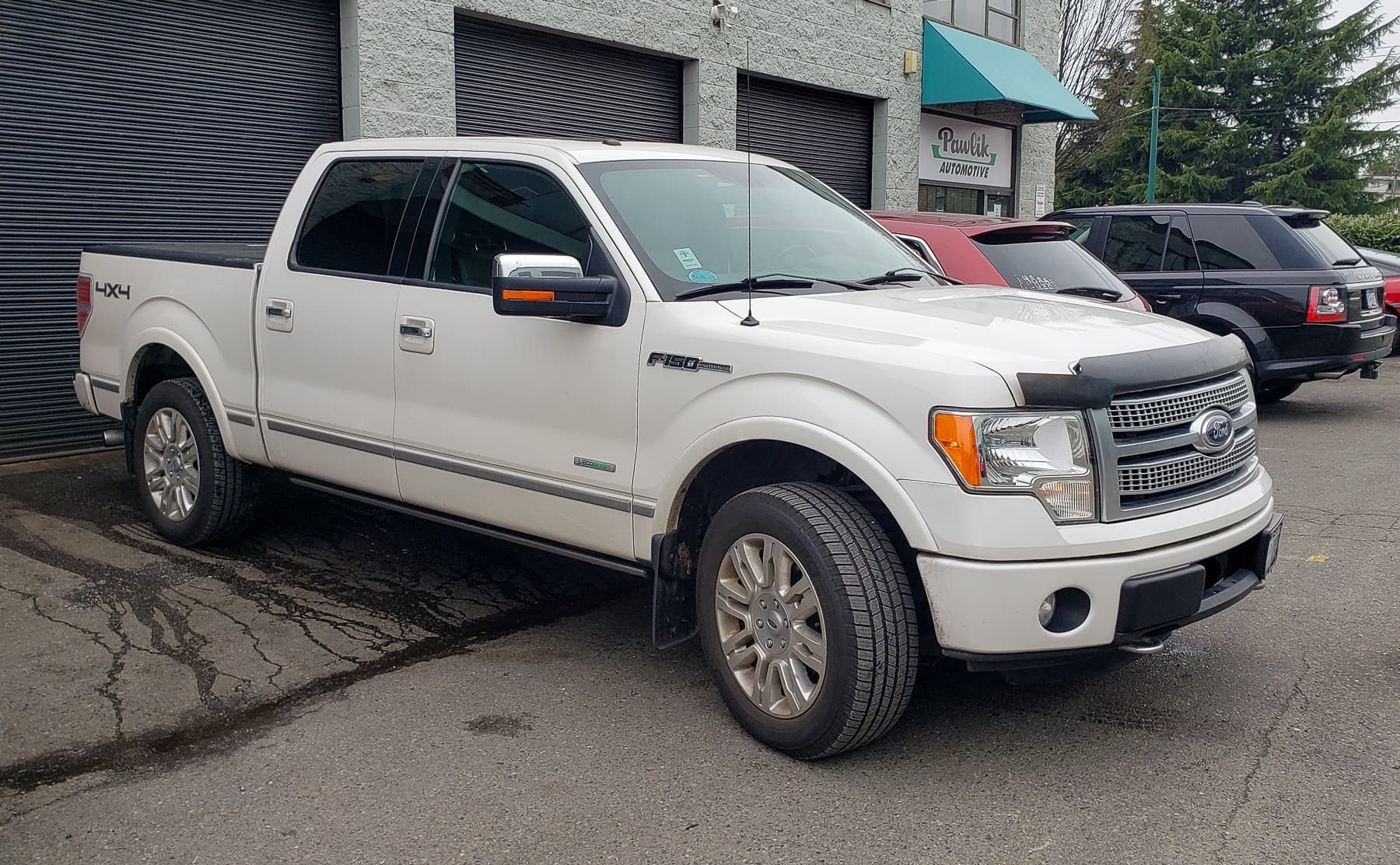 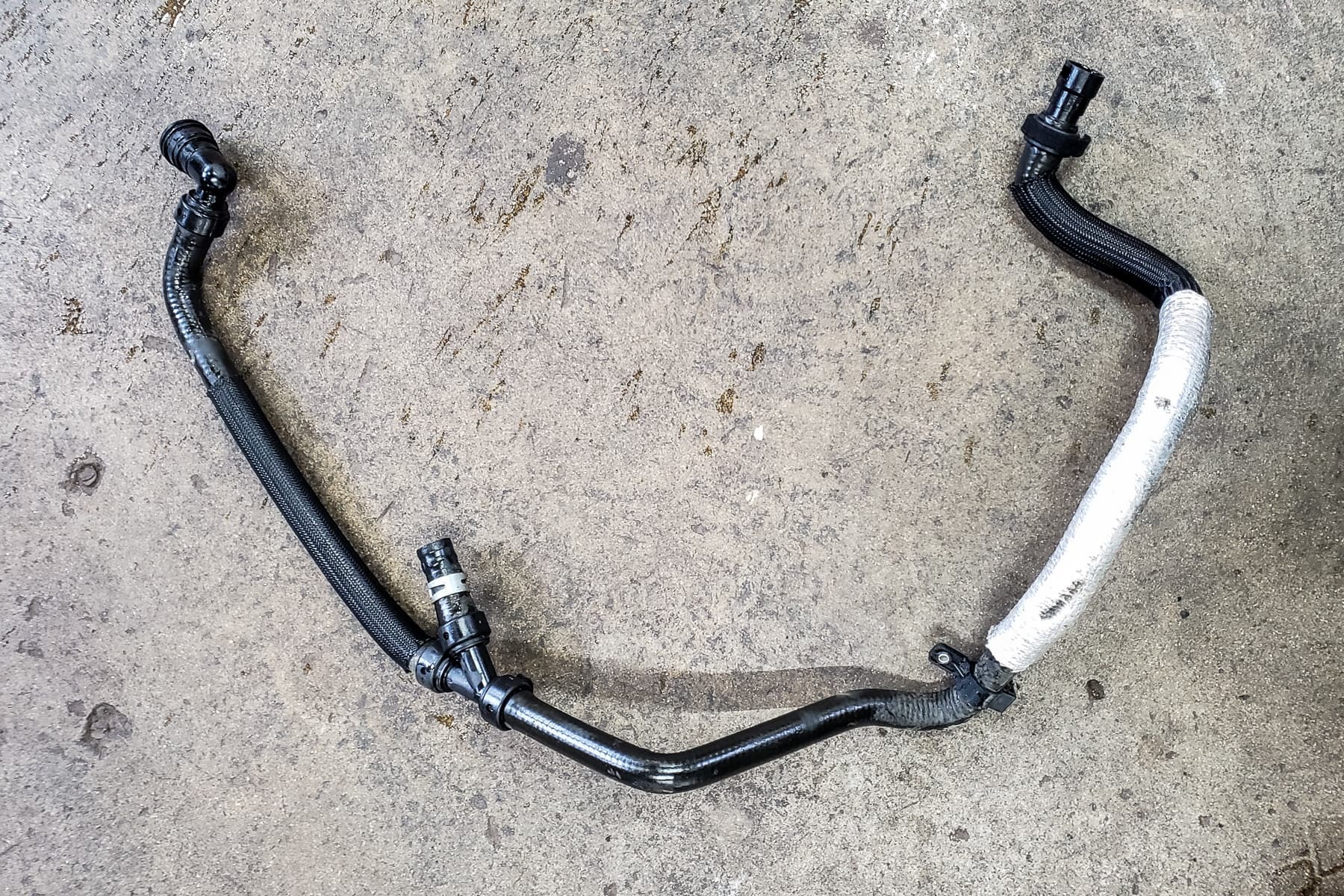 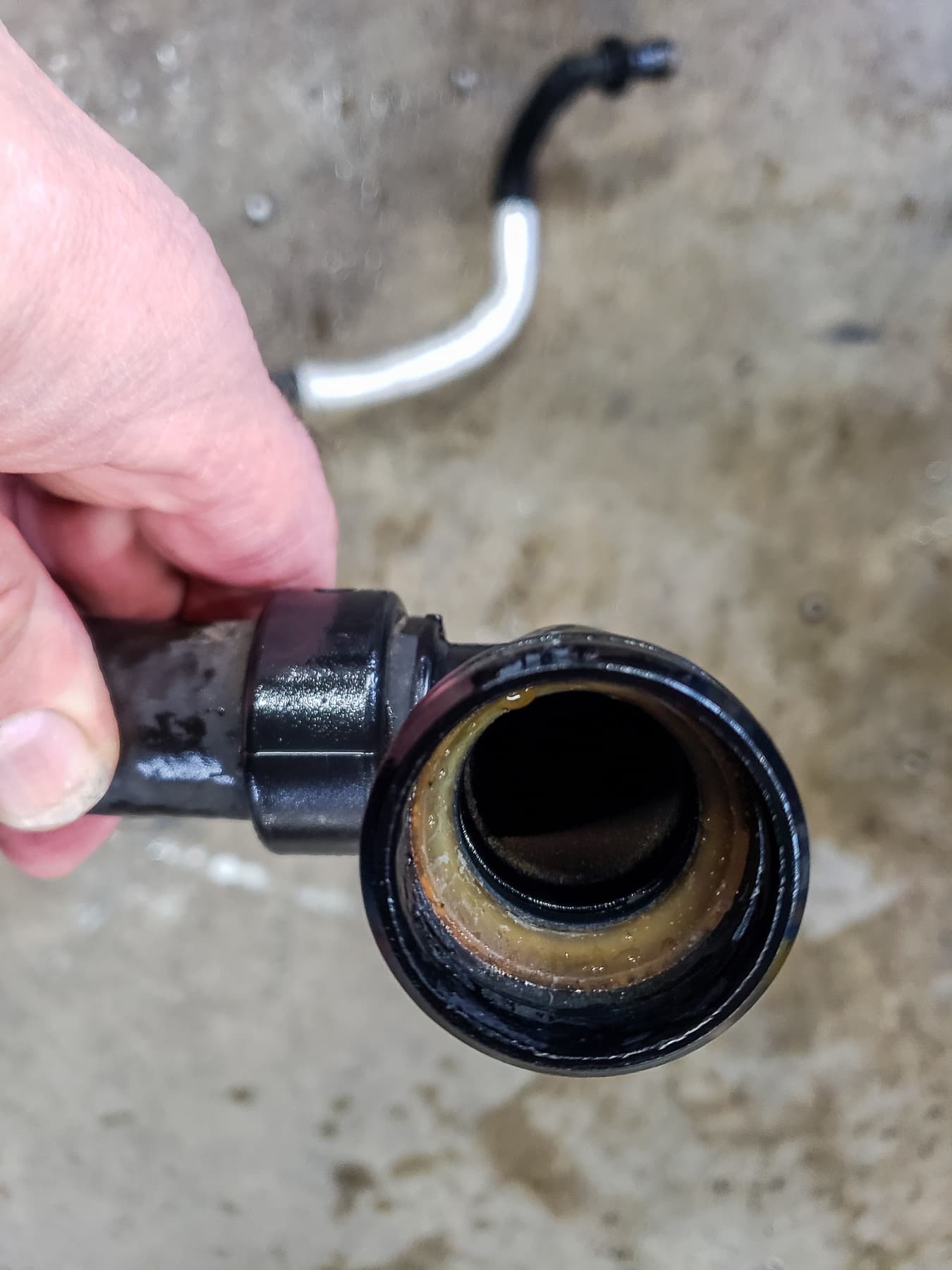 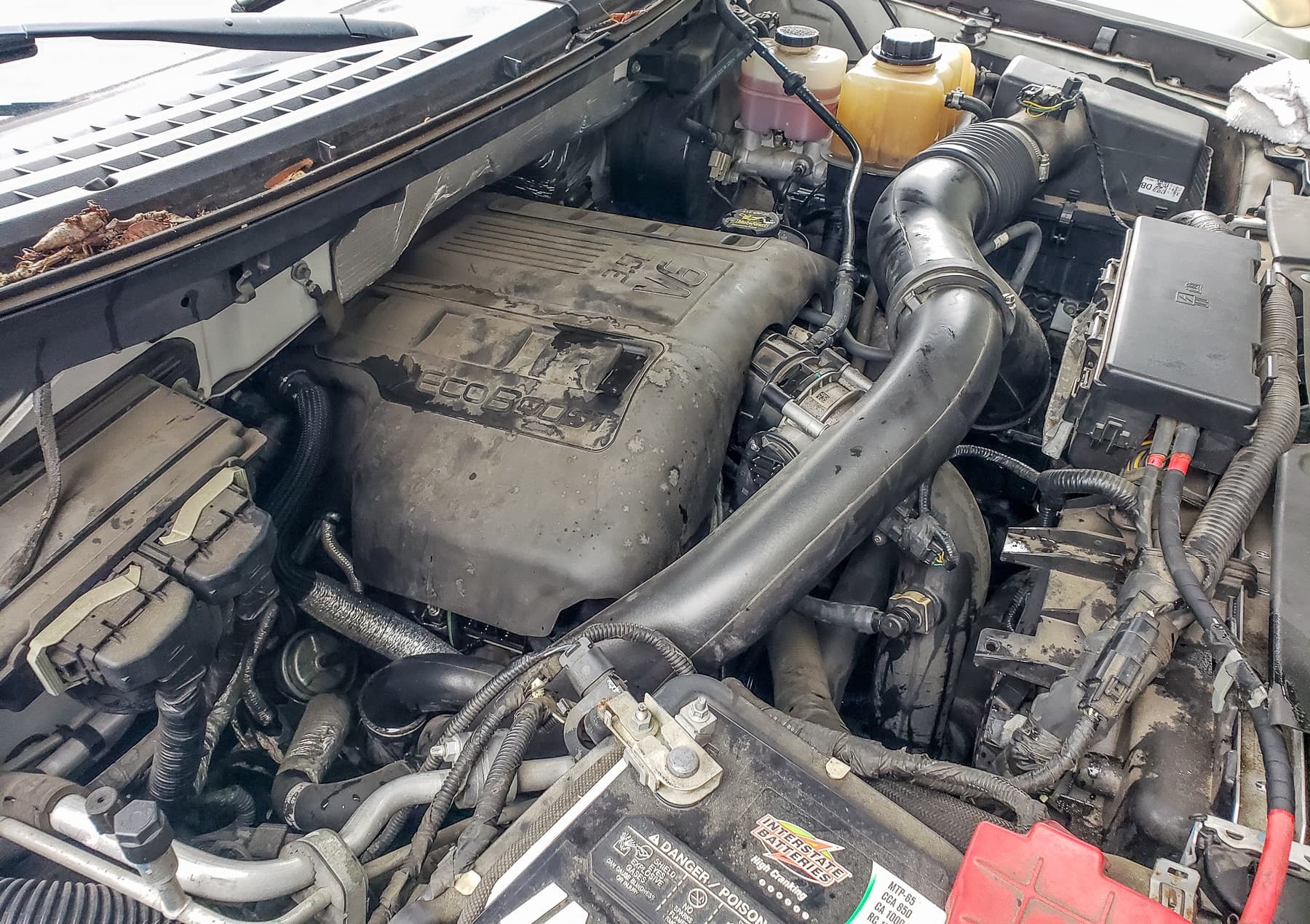 This is the hose that we replaced. So pretty fancy hose. There's a connector on this end here. This is where the leak was. It's a quick connect connector. And this is a closeup view of the connector. There's not much to see in terms of anything being bad, but there's an O-ring seal inside there that fits onto a special fitting on the heater core and clips in, and it's held in by clips.

So really easy to assemble and disassemble. Actually, you know, once it gets old, sometimes it can be a bit of a pain. Here's a view of the engine compartment. And that heater hose is just over here where I'm circling my mouse pointer. So it's at the back. There's two heater hoses. The other one was fine. We retested it after a repair and found no further leaks coming from that area.

So this hose runs way underneath here and around. It makes a couple of connections and connects to the bottom of the overflow tank.

Mark: So you mentioned that's a fancy looking hose. So the days of just extra hose, a red, rubber hose, basically from the firewall to the, to wherever, to your radiator. Are different because of how cramped the engine space is. Is that basically why?

Bernie: Yeah, I'd say that's pretty much it. We still have bulk heater hose in our shop and we do use it from time to time, but it sells less and less frequently because you know, most heater hoses now are all molded with special connectors.

So some of it is a cramped engine compartment for sure. But the second part is it's manufacturing it's I would say it's a lot easier to have a hose connected up to an engine that has a clip on it. And as it goes down the assembly line, I don't know if it's a human being or a machine, but you just go bing clip, and it's done, as opposed to having a clamp where you need a plier to pinch it, or you need a screwdriver or something to turn the screw.

So I'll actually just go back to this picture, cause it's kind of interesting conversation. You can see this hose here, does have a pinch clamp, but this is attached to the engine. And this one, it goes to the overflow bottle. So when this engine would come down the assembly line, this would probably be all attached and hooked up to it.

And as the engine is put in, then there's, this a snap this and snap that kind of thing. So I really think a lot of it is all manufacturing. Now what you're going to do in this vehicle is 20 years old, you know, to get this hose Ford decides to discontinue it, there's going to need to be some customization for sure.

But the areas that are going to be challenging of course, are these ones with the heater core because they're special fittings. Whereas this could be, you know, you can buy these kinds of T's, that's an easy thing and a straight piece of hose. You can always bend stuff. There's there's lots available you could probably do. But again, I was thinking to myself, 20 years down the road, trucks will probably all electric and most people, unless they want a vintage vehicle, probably won't be repairing this thing anymore.

Mark: Absolutely. So you mentioned this is an eco boost engine. What's that?

Bernie: Ford started these a little over 10 years ago. It's sort of the best world of economy, performance and emission. So this is a 3.5 litre V6 engine, it's got twin turbochargers. So it's got pretty impressive specs, like 365 horsepower, 420 foot pounds of torque on this particular engine.

And there are more modern models and other models with more performance. That have like far better horsepower ratings even than this. So it's pretty cool, but you know, essentially there's much better gas mileage, cause you're not hauling a heavy V8 around and you've got the benefit of of the extra power with the twin turbochargers. You know, on the downside, what I don't like is, there's more complexity, it's not simple. A V8 engine is much simpler. Whereas this you've got a couple less cylinders, but you've got two turbochargers to potentially go bad. And it's direct fuel injection, which causes some issues as well as the maintenance services.

Pretty reliable, but, and good for economy. But they're definitely more complexity and more to go wrong. So keeping up your maintenance schedule, oil changes. Some direct injection cleanings on a regular basis will keep the engine running along time.

Mark: And how are these EcoBoost F150 is for liability?

Bernie: You know, so far at our shop, we haven't really seen any problems with them. And I don't really know in the overall world I mean, I haven't heard a lot that they're a really problematic engine. So I think Ford has done a pretty good job with them. That being said, you know, we don't see a lot of them at our shop. So most of the trucks we see have V8s or diesels but I think they're good. They seem to have been working on, I mean, this truck is 11 years old now, no nine years old getting ahead of myself. There'll be 11 years old in a couple of years. So yeah they seem to be pretty good so far.

Mark: So there you go. If you need some service for your EcoBoost F150 or any Ford product guys to see are Pawlik Automotive. You can reach them at (604) 327-7112 to book your appointment, you got to call and book ahead they're always busy. Or check out the website pawlikautomotive.com. Hundreds, no exaggeration, hundreds of videos on there. We've been doing this for nine years. All makes and models and types of repairs. YouTube channel Pawlik Auto Repair. And thank you for watching and listening we really appreciate it. Thanks Bernie.