Bernie: Doing very well; yeah, proud to receive that award for the 8th year in a row, quite awesome.

Mark: But I think that’s seventeen times now you guys have won, Best in Vancouver.

Bernie: Sixteen or seventeen with that and the West Ender, I think that’s what they’re called, but yeah it’s awesome, it’s an honour.

Mark: So we’re going to talk about a 2012 Jeep Wranger Unlimited, unlimited, you had to do a starter replacement, what was going on with this vehicle? 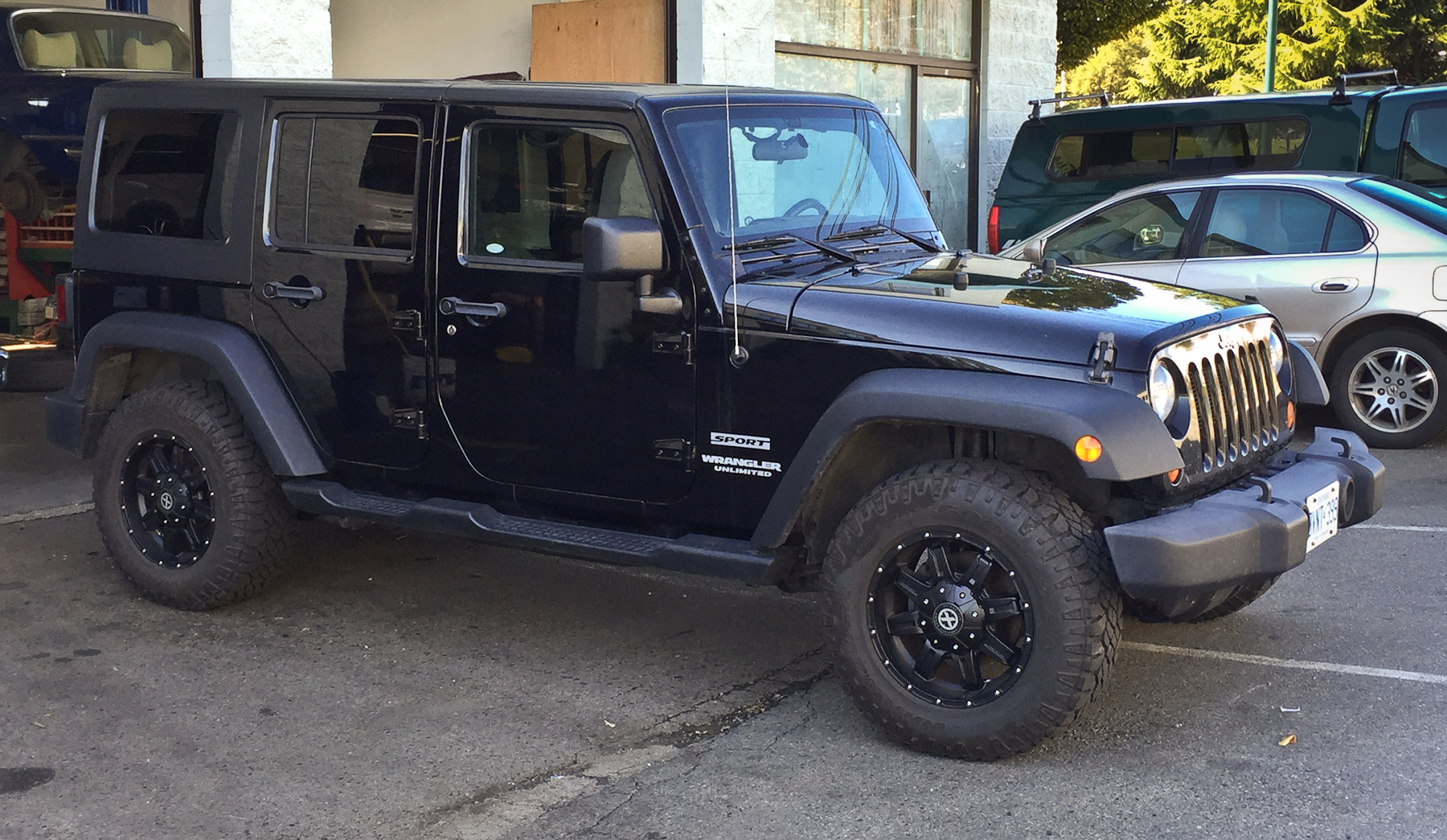 Bernie: We did, yeah so the vehicle was towed in, wouldn’t start, apparently it wasn’t running properly and the story we got was it died so brought it in, it needed a starter replacement.

Mark: So how did you determine that the starter was the problem?

Bernie: Well through a grueling diagnostic process, I mean, it’s just, just what we do for every vehicle we work on. We have to take the customer’s concerns and you look at the vehicle and do some tests and from the testing we did we found the starter was dead. Just a bit surprising because the vehicles not all that old, 2012, its only 4 years old, sixty-five thousand kilometers I think on the vehicle, really pretty young, normally I would expect you know some vehicle starters last for 100, 200,000 kilometers maybe even longer.

Mark: So I guess this is a kind of generic sort of question but how difficult was it to get details from the customer about what happened to the vehicle?

Bernie: You know this is an interesting story because when the, when the customer brought it in he mentioned that the vehicle has been making some, some strange sort of screeching kind of noises and just listening to him I kind of thought well that sounds like it’s, it’s a maybe it was a problem with the belt screeching noises, belts maybe the belt tensioner came off or belt broke, the alternator wasn’t charging and the battery went dead. Those are the kind of things I think about when a customer talks about what happened to their vehicle but it is funny getting a straight story from people, the more I’ve been in this business the more I like to ask more detailed questions and some concerns are really difficult to try to pin down and others will tell you certain things and then they reverse their story and nothing wrong, it’s just that it’s just the way people perceive things and I often get a little scared in our business when someone who comes in is not proficient in English because even people who are incredibly proficient in English it’s hard to communicate the details sometimes of what’s going on. I had a guy a week or two ago, he had said you know, the moment this vehicle goes up the slightest incline the temperature gauge goes up and the engine starts, well I surmise kind of overheating and then he repeated it to me several times, the slightest incline so we did some work on the car, Nigel went out for a drive, went up a really steep hill and didn’t even overheat so I phoned him back, he goes it only happens when I go up Royal Oak hill which if you know Royal Oak hill that’s practically like a rocket ship taking off, it’s straight up, I go well no wonder. It’s funny how many times he said the same things, we get those kind of details where I try to even ask people to trip them up for stuff and then o.k. well, we’ll just work the best we can with the information we’ve got.

Mark: So let’s go back to the Jeep, what was involved in changing the starter?

Bernie: Well starters are pretty straightforward, I mean once we diagnosed it and we determined the starter is a problem we replaced it and it’s not really huge labour intensive. I’ll just share a couple photos here while we’re on it. This is the starter motor from the Jeep, the interesting thing about the starter is it’s really small, now I haven’t put anything to give it any scale but this starter motor is probably only about six or eight inches long for the total length which is really quite small, it’s also incredibly lightweight too and I kind of makes me wonder why, whether that’s part of the cause why this starter failed at a fairly young age. Vehicle manufacturers are always trying to make things lightweight, compact you know, better fuel economy performance so they make things out of lighter materials but often that doesn’t equate to durability. 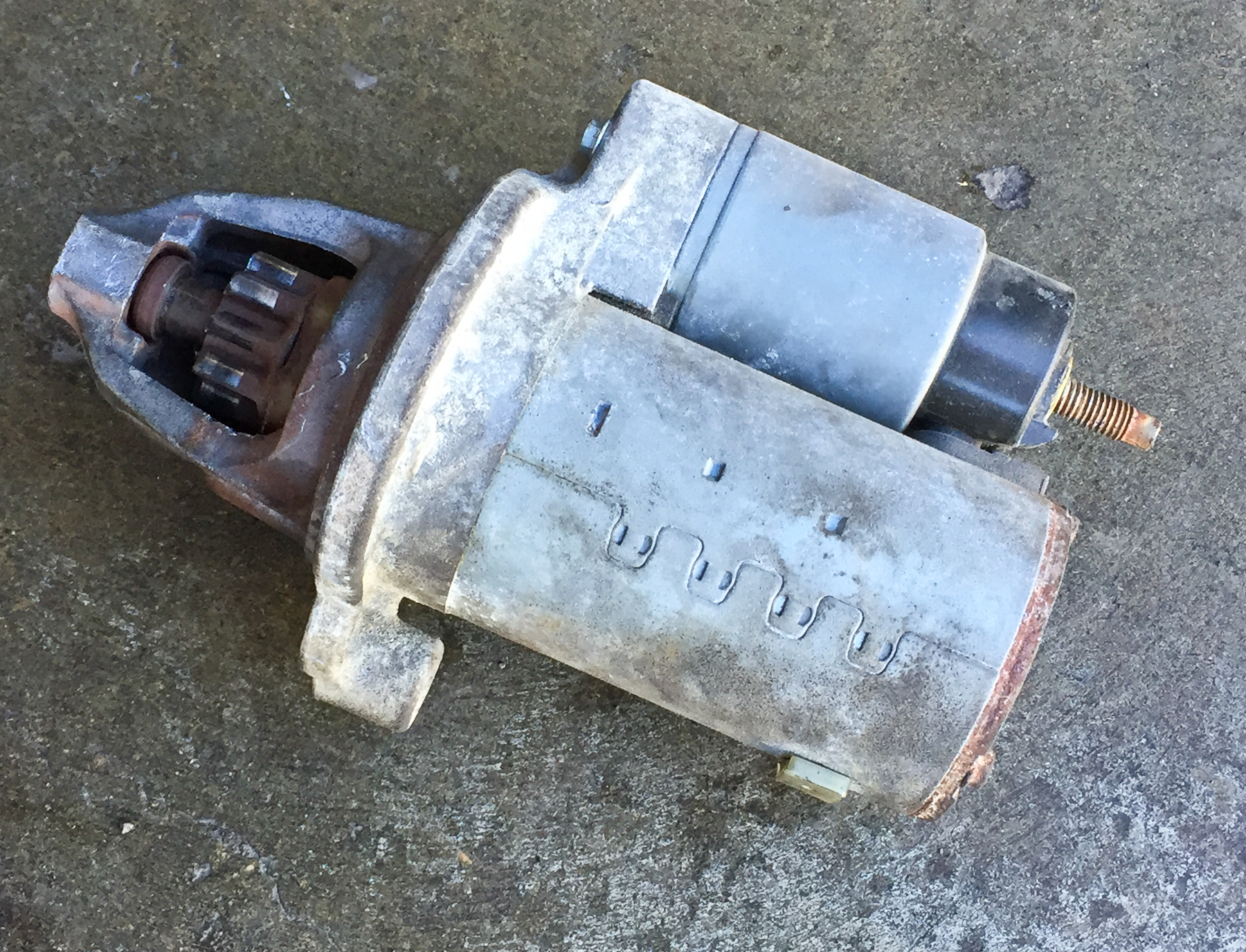 Starter from Jeep Wrangler. This unit is very small and lightweight. It may be that this compact design shorted its lifespan.

Bernie: Oh yeah, so here’s our Jeep, this is our 2012 Wrangler Unlimited, four door, quite a popular vehicle, we work on a lot of these, excellent vehicle even seen a few of these rigged up by some of the dealers around town with shovels and axes and really set up for the off road experience but a lot of people they just see street pavement but if you want to take them off road they’re definitely pretty good for that, they’re nicely set up for that.

Mark: You have another shot there that was showing where the starter was in the motor?

Bernie: Yeah, yes so this is another interesting thing and I’ll just share this back again, just hang on for a second here. Actually this is a not actually the starter, this is a I took this photo because I found it very interesting, like a lot of modern cars, it has a big plastic cover over the engine. We pulled the cover off and found that, found the alternator position rather unusual in this vehicle; they’ve actually mounted the alternator backwards to where they normally sit. That red arrow points to the alternator and normally and if you look to the right of that you see sort of a round piece, the black section, that’s the belt, the drive belt and normally the alternator sit the other way around but that drive belt pulley sits forward and it’s kind of been like that for ever and ever, as long as cars have been manufactured but on this one they’ve flipped it around the other way. I guess there was space under the hood and room and that’s what they did so, it’s funny looking at the innovations of car manufacturers do, kind of set us back, what the heck is that and that’s basically what they did. It works fine either way as long as it’s bolted up and the belts tight. 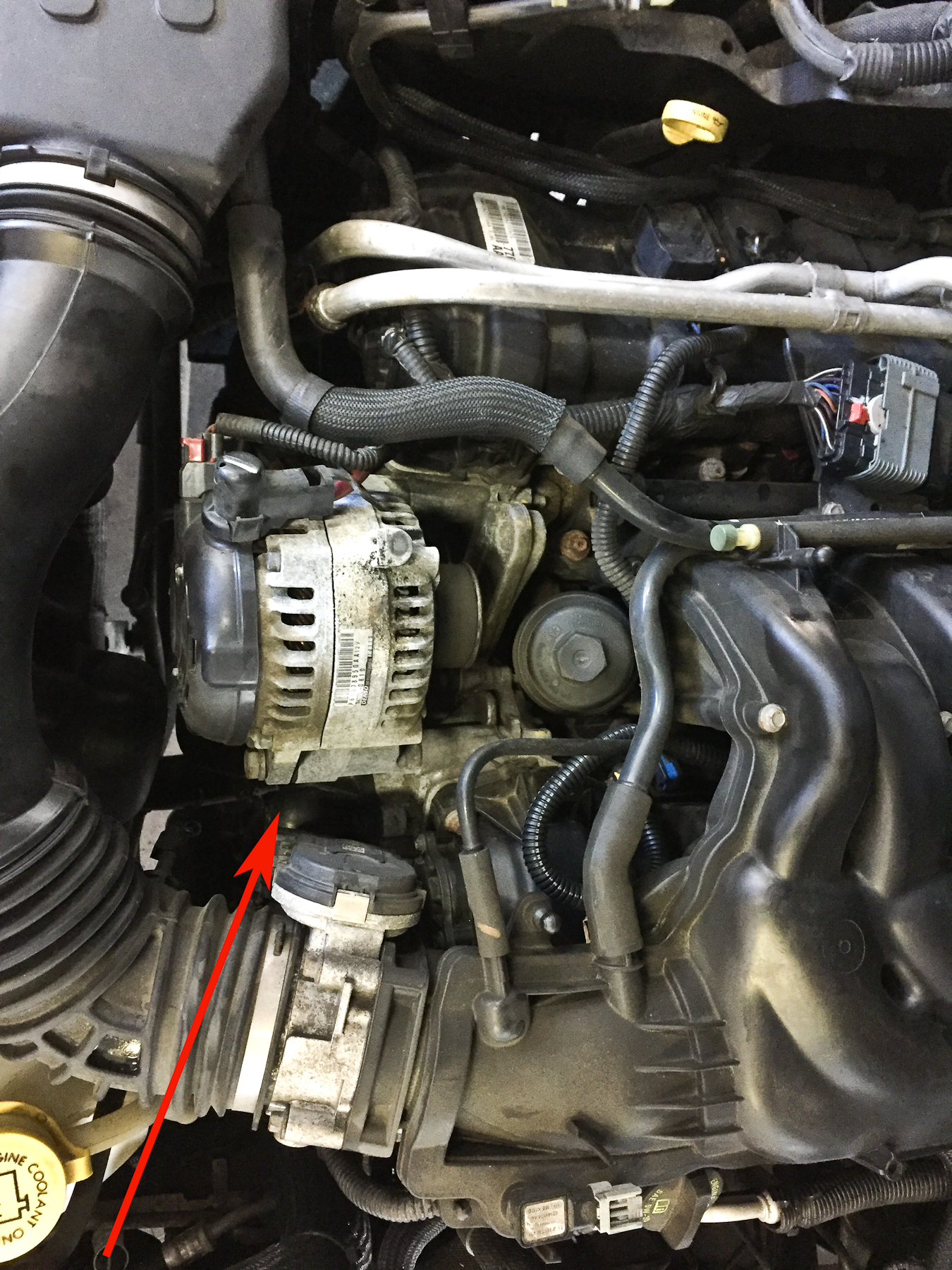 Mark: So how are Jeeps overall for reliability?

Bernie: Well I’d say they’re not fabulous, they’re actually to be honest with you they’re kind of one of the vehicles we like to work on because a lot of stuff goes wrong with them, so that’s a bit of an honest from the auto repair shop, a bit of information but people love Jeeps, I mean we have a lot of customers with them, people seem to like them a lot, I mean because they’re a unique vehicle and they’re capable of doing some offroading, a lot of people don’t but they like them and where there’s more stuff goes wrong with them than probably should but you know, they seldom break down if they take care of them, we don’t get too many towed in like this one but there’s a lot of, they’re complicated too, it’s all wheel drive, 4 wheel drive so there’s transfer cases, differentials, lots of other bits and pieces that can go wrong.

Mark: So basically make sure that you’re maintaining your Jeep regularly and you’ll get the maximum life out of it.

Bernie: Absolutely and I mean expect that you will spend more money fixing it than you would on a lot of say a Toyota Yaris or a Honda Fit but it’s a different class of vehicle than that so.

Mark: If you’re looking for maintenance and repairs on your vehicle in Vancouver the guys to call are Pawlik Automotive; check out their website pawlikautomotive.com, tons and tons of information on there. We’ve been doing these hangouts for a long time, they’re seen all around the world or you can give him a call to book 604-327-7112. Thanks Bernie.