Mark: 2012, there was a Kia Rio manufacture that appeared in your shop, what was going on with this vehicle?

Bernie: Yeah, so this vehicle came to us, a couple of issues. One basically the owner had found his fuel economy was dropping, and also there was a check engine light on. So two issues.

Mark: And so was this the first time you'd seen this vehicle?

Bernie: Yeah. This is a new vehicle to our shop.

Mark: And so what kind of repairs did you have to do?

Bernie: So this vehicle came to us in a couple of different rounds. The first round we scanned it, there was a code for a lean air fuel condition. Did some diagnostic and testing on that and figured based on the fact that there was low fuel mileage, everything we could test on the AirFuel ratio issue. We did some tests for vacuum leaks and various things, found nothing in that area. Figured doing a GDI gasoline direct injection system cleaning might be a good place to start because if the valves get carboned up, it can cause lean fuel condition issues, fuel economy dropping, a lot of different issues. So we did that. Completed the work sent the vehicle out the door, and a week later came back and the check engine light was back on again.

Mark: So when a vehicle comes back after you've done a diagnosis, do you charge for more diagnosis? How does that work?

Bernie: So it really depends on the circumstances. In the case of this vehicle, we did not. We basically re-scanned the vehicle computer to see what trouble codes were stored, and this time we found a new one. It was a P0420, kind of a dreaded code. If you've know anything about codes, it's a catalyst efficiency, code and usually 99% of the time, maybe 95% of the time, it means the catalytic converter's weak. I say 95 because it's possible you could have an oxygen sensor that isn't quite reading properly, but usually, there are other codes that would set in that case.

So and there are things like vacuum leaks or exhaust leaks that can cause that code as well. But most of the time it's a bad catalytic converter. Based on the mileage of the vehicle, the fact that the spark plugs had been replaced recently and the engine may have had a misfire, you know, it was pretty clear the catalytic converter needed to be replaced.

So that's what we did. And we didn't charge for that diagnostic because we'd already done previous tests and verified a number of things. But it depends on the car. So this is actually a really good important point to bring up because sometimes we'll have a car that comes in and has 10 codes and we clear the codes and we drive it, and then we find maybe one or two codes return.

We go, okay, those are the most important things to deal with at this moment in time. So we deal with those codes, we fix it, and then the vehicle might come back. So the other subsequent codes maybe something different. And if they involve a lot of testing that isn't relevant to what we've previously tested, then there would be a charge. In this case, there wasn't. So it's kind of a 50/50 thing.

Bernie: So catalytic converter actually is an item that doesn't really wear out, but they do need to be replaced for several reasons. So the way a catalytic converter works, it's like sort of a honeycomb of metal coated with precious metals and it creates a chemical reaction. So that reaction doesn't really ever break down. But what happens is the converter can sometimes mechanically fail, like it comes loose inside its casing or an ignition misfires kind of the biggest thing, or, or too much fuel will cause a catalytic converter to overheat and melt internally or damage.

So it's usually damage from the engine. This is why a car with a check engine light on the, if the light's on solid, it's not usually a big deal if the light is blinking and that's usually accompanied by an engine misfire. You need to fix the car ASAP because the blinking check engine light indicates there's a catalyst damaging misfire. That's basically what that interprets to.

So we don't know the history of this vehicle. It's the first time to us, but the client did say he replaced the spark plugs. Maybe it had a misfire beforehand. I mean, if you drive it too long, it'll usually kill a catalytic converter. 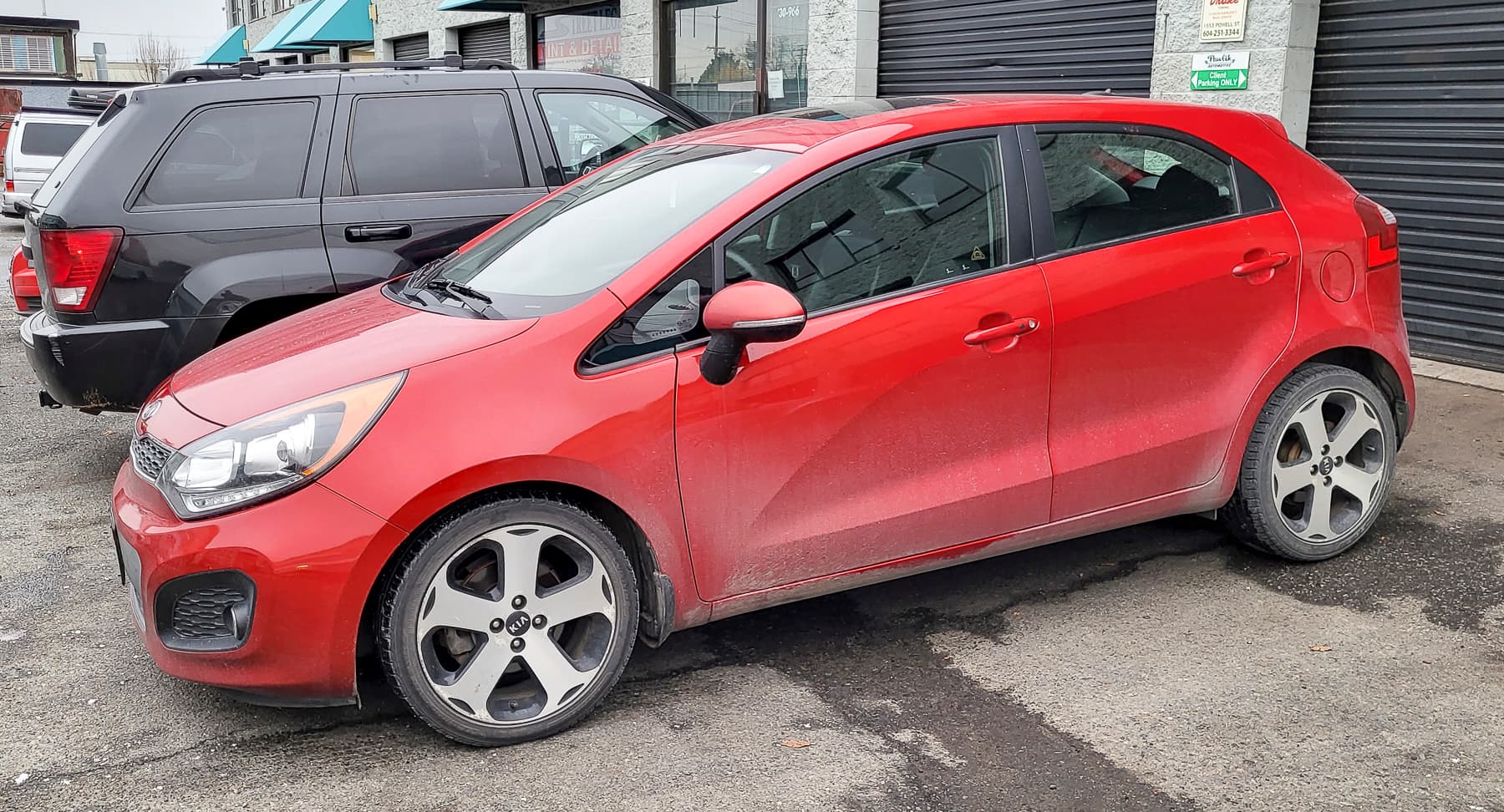 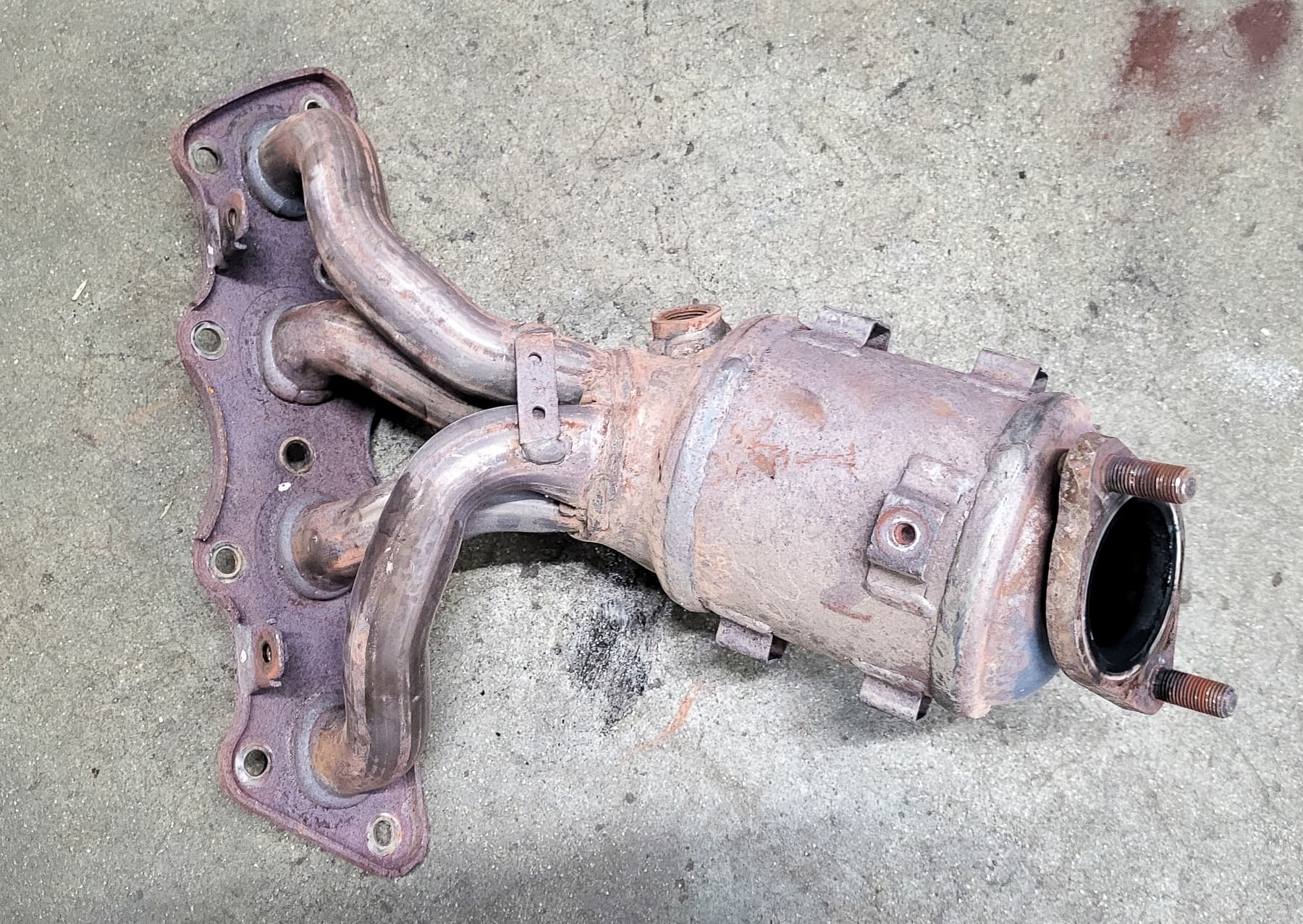 So yeah, it's not terribly difficult because the type of car, you know, there's not too much in the way, but it's a few hours worth of work to pull us apart and take it in and out.

Again, there's another view of the assembly here. It involves the exhaust manifold gasket on each end, and lots of nuts and bolts and things to deal with. Fortunately, nothing was seized or broken because often that kind of thing can make the job a little more difficult. But that's basically the unit there. 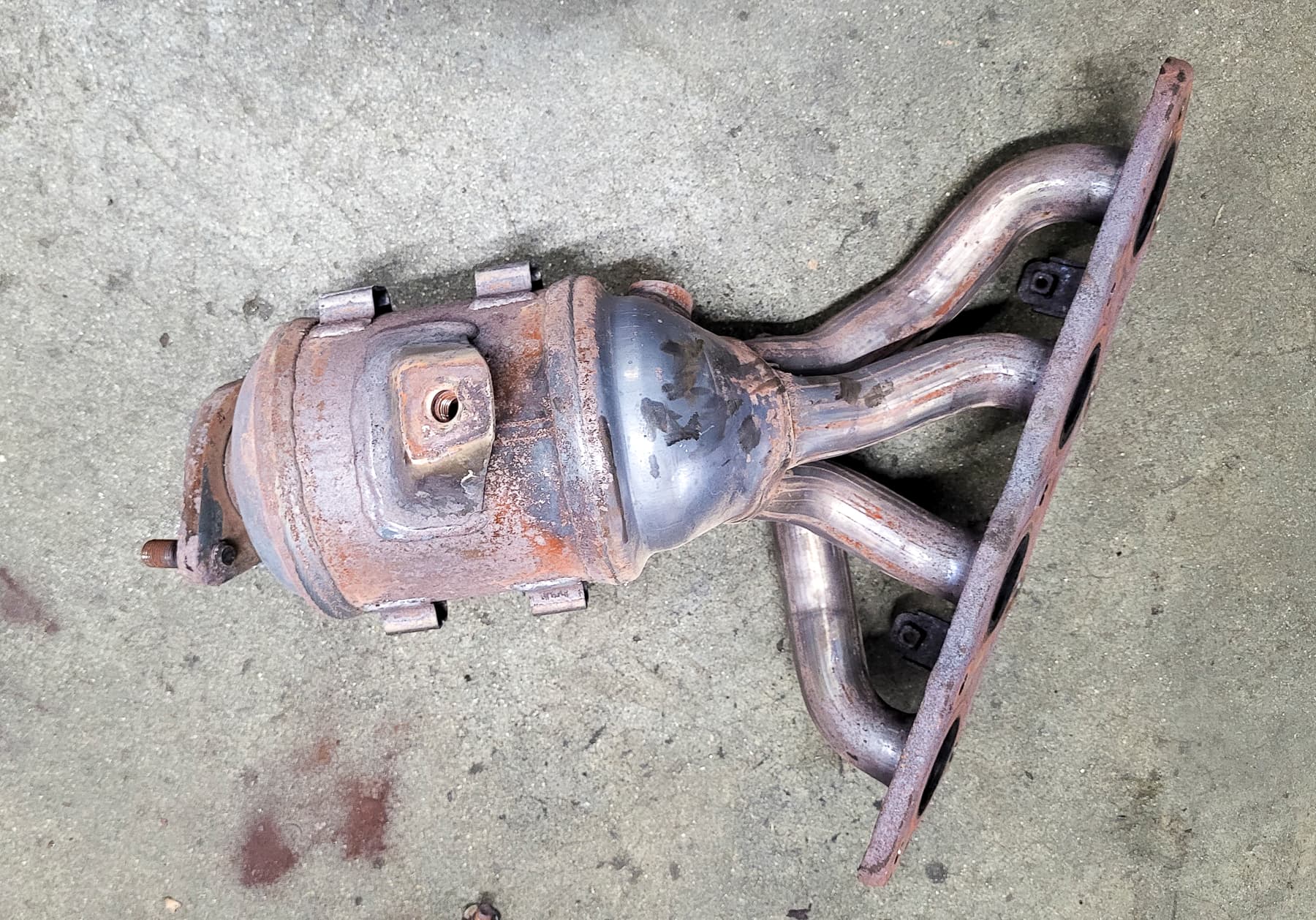 Another view of it. This hole here, that's where the front oxygen sensor attaches. So that'll be taking readings directly off the engine making adjustments to the fuel system from there. And then I'm not sure where the rear sensor may be mounted in the next pipe, into the downpipe. Sometimes it's mounted at the base of the catalytic converter. And that monitors the efficiency of the converter. And that's usually between those two. We'll set that P0420 code based on the information it's getting. So there we go.

Mark: So can you just replace the catalytic converter? Could you like cut the cat off and weld a new one?

Bernie: Well, you probably could, but it's a very, again let's just get back to the pictures because if you look at this, I mean this would involve some, first of all, getting the right size converter and it would be very difficult.

Someone who's highly skilled at welding could probably do it. We could probably find a converter, but it just, wouldn't be cost efficient to do it on this design. I mean, we will weld converters in more on vehicles where the converter is further down the exhaust system and that's really kind of an old fashioned way to do things.

You might wonder, well, why would they make this so complicated? Well, The catalytic converter needs heat to operate, so the most heat, of course, is right again, I'm moving my mouse pointer here. Right where the exhaust comes outta the cylinder head. And then of course the next hottest spot is just right down the pipe.

So if they put it right near the engine, the catalytic converter heats up extremely quickly. And that's why they put these converters up in this location. It's very common, so it's more expensive to fix because you have to replace a manifold assembly. But it's more efficient. You get a emission reduction within 30 seconds of startup. Whereas if it's further down the pipe, it might take you know, a minute or longer before it heats up enough. And especially in the olden days, you'd look at like the seventies or eighties when they put cats in, they were like four feet down the exhaust stream way underneath the bottom of the car. I mean, it would take several minutes for that to actually start working. So this is a much more efficient system.

Mark: And could you get aftermarket parts for this, or was this from the manufacturer?

Bernie: Yeah, we got aftermarket for this one. Dealer catalytic converters are almost always better than aftermarket because they just have more precious metals in them, and the cost can be substantially higher. So we kind of weigh the cost, the age of the vehicle, what's available. Certain import cars, I mean, you're pretty much stuck with buying an OEM. It also depends on the car too.

I was just thinking, I had a Mercedes SL55. Fortunately I never had to replace the cats cause it would've been insanely expensive. But you know, I was just thinking if you could weld the cat in the bottom of that. But, you know, to make it look nice when you hoist the car up would be kind of difficult to do with an aftermarket cat. So I'd almost be more inclined to spend the thousands of dollars that would cost, then to weld something in for half the price. You know, but everyone's different.

Mark: So how common and repair is this on Kia Rios?

Bernie: We don't do many of them. You know, and I think the thing with cats is that it's not a predictable failure item. A lot of it is circumstantial. But I've had customers in the past where they've had a vehicle with a slight little misfire and they don't fix it for a while and then they fix the problem and then within six months there's a P0420 or 0430, that depends on which bank it is of the vehicle. Cat efficiency code comes up and you go that was predicted. So, it is really important to do the maintenance on your vehicle to keep it up and you know, as I say it's not entirely common for this vehicle.

Mark: And how are Kia Rios for reliability?

Bernie: Yeah, they're good car, you know, it's a, oh I hate saying bottom end car cuz that kind of seems insultive, but you know, it's a lower priced car and they're actually really good. They work really well, pretty reliable. If you're looking for an econo car to drive, this is, you know, an unfortunately expensive repair on this vehicle that isn't that common. So think you can count on 'em, it's a good car.

Mark: There you go. If you're looking for repairs for your Kia in Vancouver, the guys to see are Pawlik Automotive. Or your catalytic converter, if you've had some backfiring, get in to see them right away. Pawlik Automotive. You can book online at Pawlikautomotive.com, or you can call them (604) 327-7112 to book. You have to call and book ahead or book online ahead of time. They're always busy. The parking lot's full. But they're cranking them through and fixing a lot of people's problems and getting their vehicles running reliably again. Pawlik Automotive. Thank you for watching and listening. Thanks, Bernie.