Mark: Hi, it's Mark from TLR. I'm here with Bernie Pawlik, Pawlik Automotive in Vancouver. Vancouver's best auto service experience. And that we can say that because there are 24 time winners of best auto repair in Vancouver as voted by their customers. We're talking cars. How are you doing Bernie?

Bernie: Well first of course, is just to verify the issue and we did have the car overnight and the vehicle did drop down on us. We could see that. Test scan for codes. Didn't find anything useful in that area but what we did a visual inspection that we could actually hear a hissing sound coming from the left front air strut in the airbag area. So that's a perfect verification of where the problem lies. You don't want leaks in an air suspension system.

Mark: So how big a job is it to change the air suspension?

Bernie: Well, it's quite a few hours work and it's pretty pricey. The actual air struts themselves are a pretty complex item, which we can talk about in a little bit. There's a lot to remove and re-install, but it's kind of typical for a job like that. Quite a few hours work for sure.

Mark: Sure, were there any other parts that had to be replaced along with the air struts?

Bernie: Not in this case. Sometimes, you know, we find a lot of vehicles with air suspension if someone's left it for awhile, sometimes the compressors will wear out. Or it sometimes comes to us with a bad compressor because it's been working so hard to keep this suspension system pumped up. But in this case fortunately it was only just the air struts. So have a look at a picture. 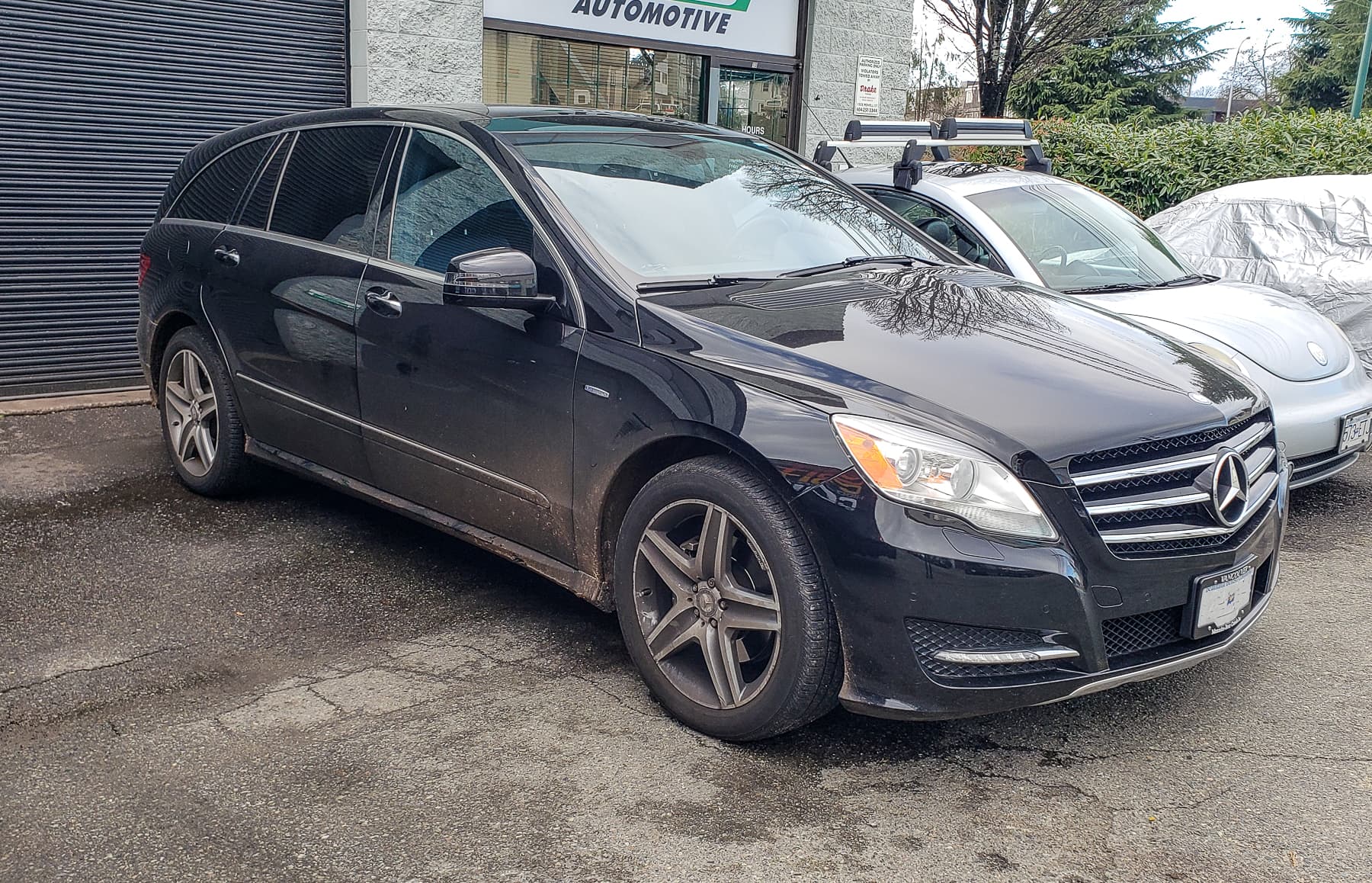 So there's our vehicle, the R350. Interesting looking vehicle, which we can talk about in a few minutes.

Here's the old strut, this is partially removed. So you can see some of the suspension, some of the steering knuckle has been removed to access it. So as I say, there's a fair bit of labour involved in getting these out. They're kind of wedged in there. Here's the upper control arm that I'm kind of moving my mouse pointer over. Here's the airbag right here. The knuckle down here in this particular area. And this is part of the shock absorber system. 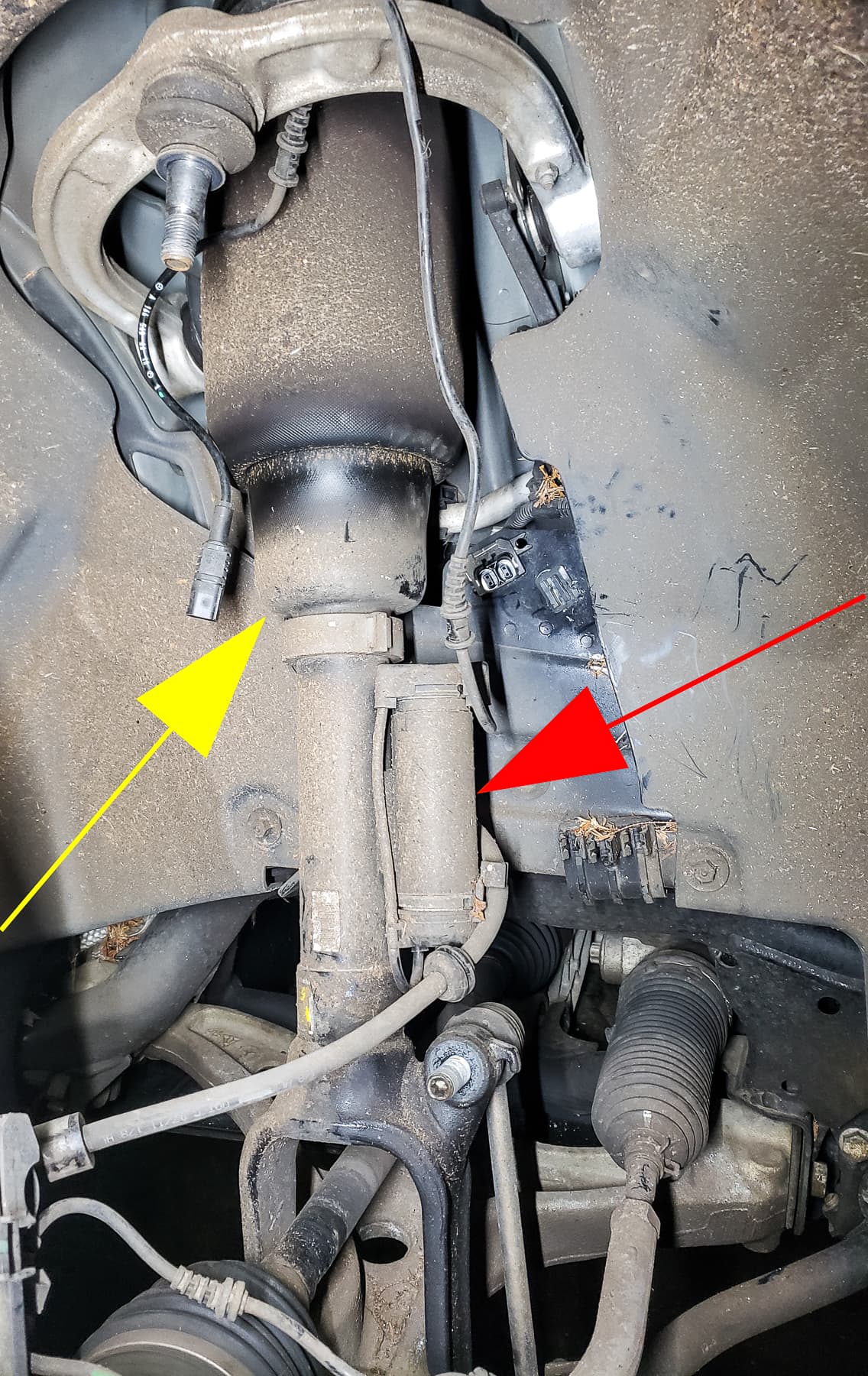 We'll look at a picture of the new piece here. And I realize I'd actually had some nice edited photos with arrows pointing, which will actually be included in the written portion of this podcast. But for some reason, I got the wrong pictures here.

But anyways, you can see a little cylinder beside the strut, and this is an electronic control to control the suspension system. So this is like a ride control. So if you want a firm ride or a softer ride, these are adjustments you can make from inside the car. And that's controlled to this piece here. That's what makes this a very expensive component. If it was just a regular type of strut, it wouldn't have this on there. And it'd be a much simpler item just with the airbag here.

And you can see this as the airbag here, somewhere on the old one on the left side, there was a leak in the actual bag. So they just wear out over time. There's our short and sweet picture show.

Mark: So, did you change more than just the one leaking airbag?

Bernie: We changed both fronts. Yeah. The rears we left, you know, anything was suspension. It's always best to do things in pairs and the same with brakes as well. If you know, you have one brake, that's worn out, you don't just change brake pads or rotors on one side, you always do everything at per axle because there's an effect of how it handles. Now on a rear suspension, you could just change one side because the rear isn't quite so important as the front, like the front, everything has to be in perfect precision, let's say.

Mark: Where you steer the car.

Bernie: Yeah, exactly. You know, things have to be very precise on the front, whereas the rear, it's important that it's fairly equal, but it can be just a little slight bit off, so you could just change one on the rear. But if one front one's gone, chances are the other one's going to be bad too.

And what was happening with this vehicle also is a problem had been going on for a little while. The front right was also starting to drop too, although we didn't detect a leak in the front right yet, but you know, it's just best to do things in pairs and have everything equal.

Mark: So how was the vehicle after repair?

Bernie: Yeah good. Yeah, it worked fine, worked great. We kept it overnight to make sure it held the air. Was all good.

Mark: Is there anything that an owner can do to keep the airbags working or not leaking over time like this one did?

Bernie: Well, yeah, that's a good question. And this vehicle surprisingly only had like just over 50,000 kilometres, which is really low, but it is a ten-year-old vehicle. You know, there's not much you can do. An air suspension system, it's just kind of along for the ride, so to speak. You know, if you're driving over a lot of rough roads, I guess that would be a little harder on the vehicle, but if you have to drive over rough roads, you have to drive over a rough roads. There's really not much you can do.

I mean, the only thing I can think of is, you know, if you're driving in areas that muddy or there's a lot of road salt is to flush under the suspension system once in a while just to wash any salts or dirt off of it. That would be probably the only thing I can think that you could do as an owner of a vehicle like this. Otherwise it's really, everything's just going to wear out and in its own time.

Mark: And the airbag system, the reason why it's like, just to reiterate what you already said, the reason it's there is because you can adjust the ride comfort level, firm or soft. But can you also adjust the vehicle height?

Bernie: Yeah, you can. And that's kind of one of the bigger advantages of air suspension, is you can take a vehicle like this and it's a large vehicle. You can put five passengers in and enough camping gear to go away for a couple of weeks. So, you know, like quite a lot of weight, you can load the vehicle fully and it's going to ride really nice and smooth and level.

Whereas if you you know, it didn't have air suspension, the vehicle would either sag in the back or, you know, it affects the handling. So you have a vehicle that rides at the same level, no matter what kind of weight you put in it. And a lot of air suspension vehicles, you can adjust the height.

I owned a Subaru, many years ago. There was a time in the eighties where Subaru's had air suspension, eighties and early nineties, some models that air suspension. And it was kinda neat because I could load the car up and go camping. We'd ride real nice and smooth. And you can also raise the height of the vehicle for off road. So if you're driving down the highway, you know, you want the vehicle to be low and near the ground when you're going fast. But if you're going on a slow road and there's some ground clearance issues, you can raise the vehicle. So it works really nice, but there's a price to be paid for it when things wear out. But, yeah, that's kind of the best advantage.

Mark: So you mentioned these R models that are a little bit unusual. How are they for reliability?

Bernie: They're kind of the same on par with pretty much any other Mercedes. This vehicle is kind of built on the same platform as an ML or a GL. And so they're kind of similar. I mean, they have the same engine options that you'd find in those models. You can get everything from a gasoline V6 up to a V8.

They even make an AMG model. If you want to go really fast with your zero to 60. And I actually looked at the spec, it's about 5.5 seconds. A friend of mine was a car dealer once described as these cars look kind of like a coffin on wheels and a sorry, if you own one and you really like the look of it, it's a bit of an insult, but you know, there's got to be one of your coffin on wheels to go zero to 60 in 5.5 seconds, you can get the AMG model. They're like any other Mercedes good, reliable, but you know, you'll spend more money on repairs because they're just more complex.

Mark: If you're in Vancouver and you're looking for service for your Mercedes-Benz, the guys to see are Pawlik Automotive. You can reach them at 604-327-7112 to book, or you can book online at pawlikautomotive.com. You have to book ahead. They're busy. And if you enjoyed the video, you can check us out on YouTube. We have a channel there with close to a thousand videos on all makes and models and types of repairs, Pawlik Auto Repair. Or on the website itself pawlikautomotive.com. Full details, written write ups, all kinds of great information there. And of course, thank you so much for watching and listening. We appreciate it deeply. And thank you, Bernie.