Mark: So today's victim a 2012 Mercedes. One of your favourites, E63 AMG that had a sway bar link problem. What was going on with this car?

Bernie: So the vehicle came to our shop with a few concerns, an inspection and we found that the sway bar end links were worn and causing a clunking sound in the vehicle when you hit bumps.

Mark: So I'm assuming the clunking was from the sway bar links.

Bernie: Absolutely. Yes. I mean, it could be coming from lots of places and the sway bar links are probably the cheapest, easiest thing to fix on this vehicle. So fortunately for the customer, it was a fairly straightforward problem.

Mark: So what is the sway bar link and what does it do?

Bernie: So the sway bar link. Why don't we just get into some pictures right now? And I can kind of explain what it does. So there's our car a nice little family hauler with, you know, over 500 horsepower twin turbo V8 engine. It's a lot of fun to drive this vehicle as you can well, imagine.

So sway bar link. We'll just get right to the part. There is a picture. I apologize. It's a little fuzzy. 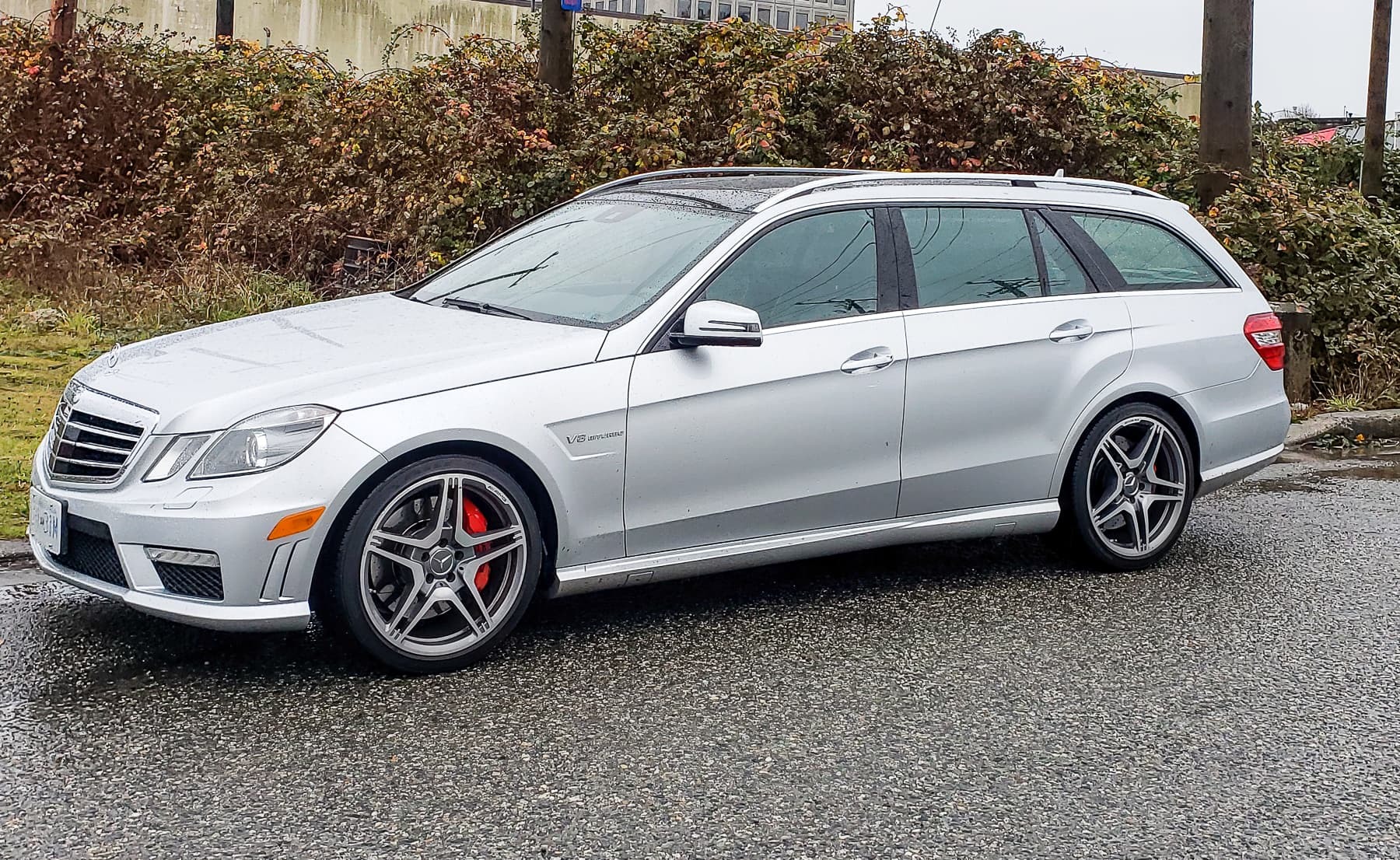 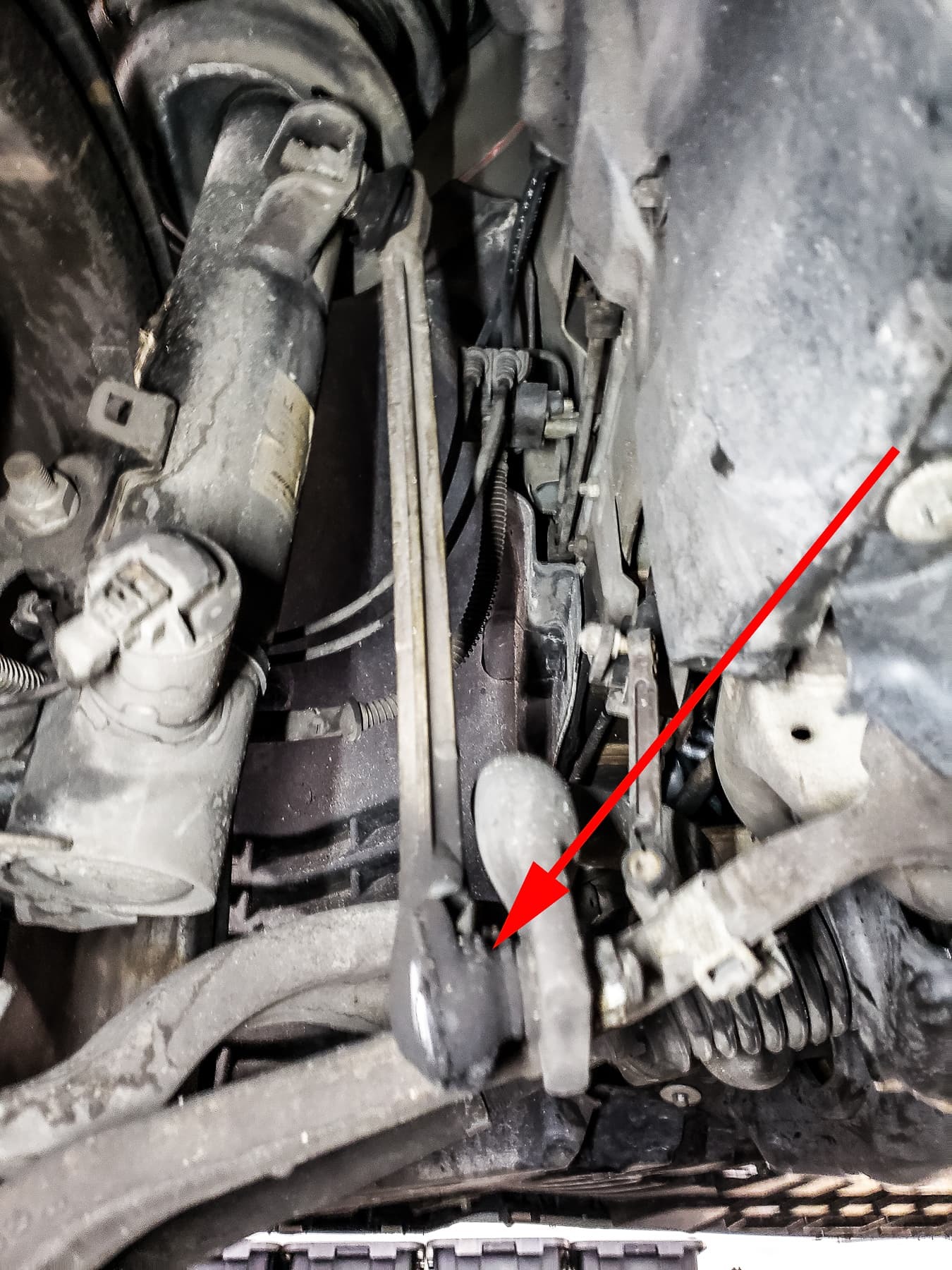 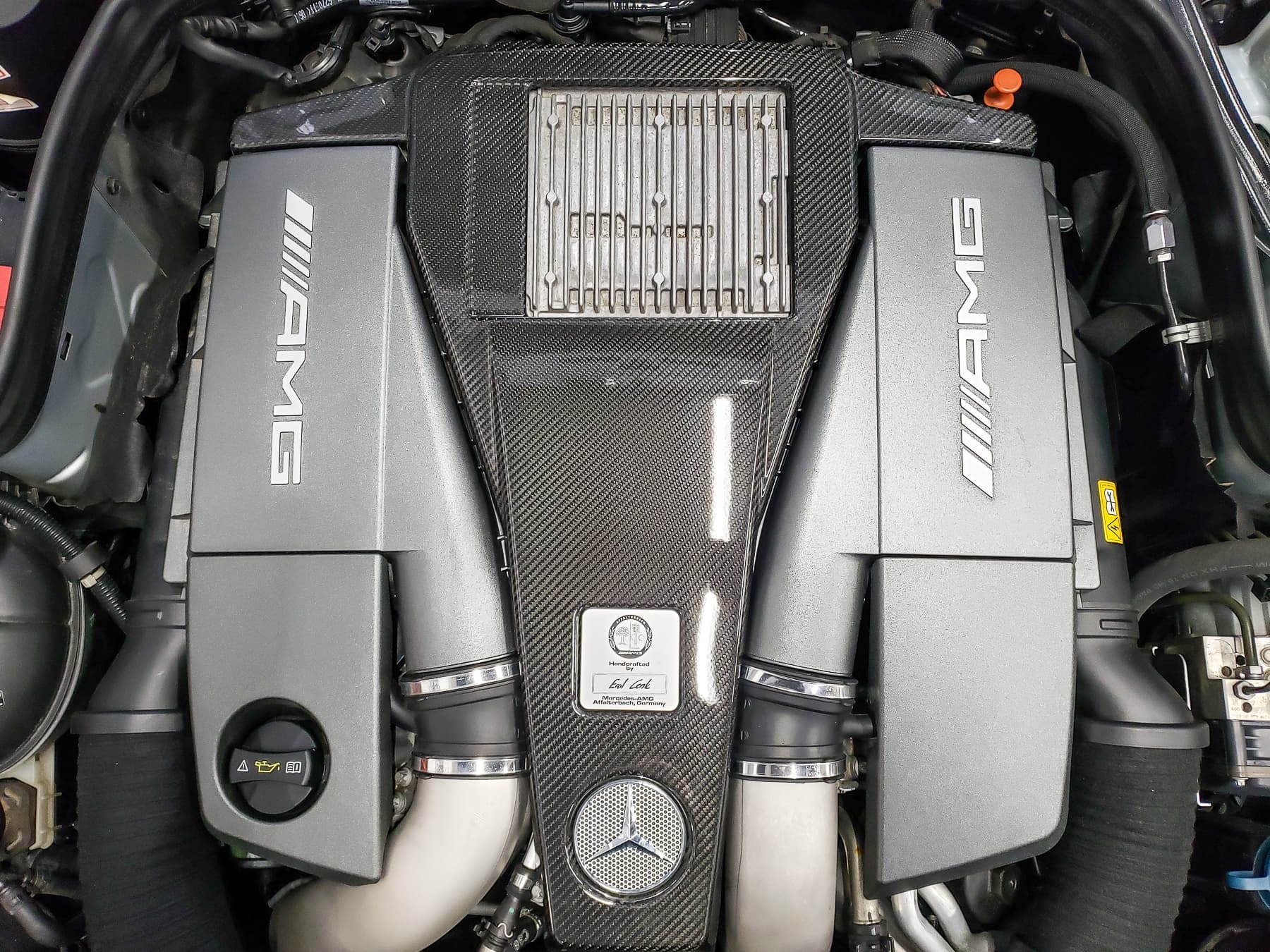 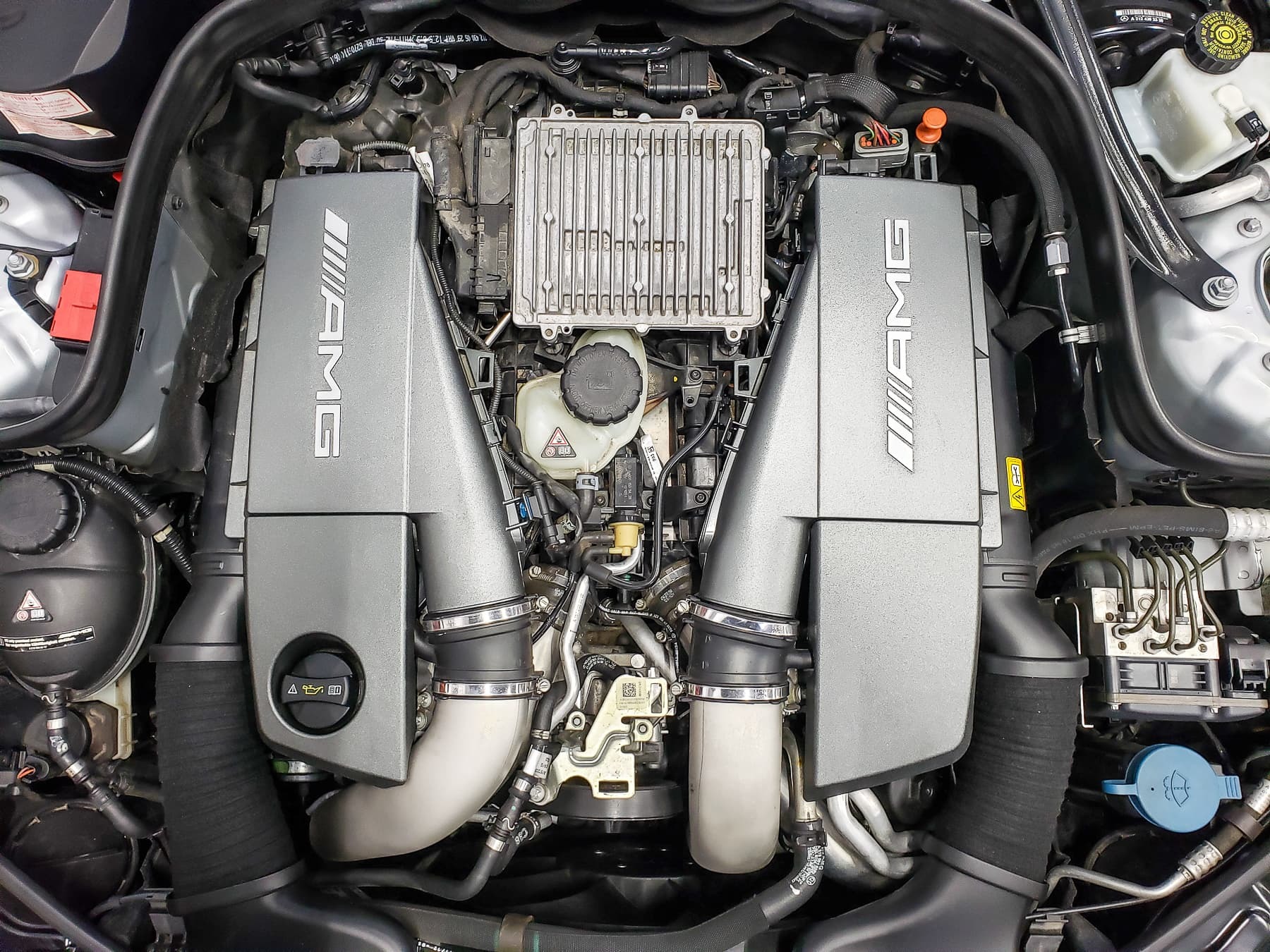 This is looking up at the driver's side underneath, the wheel is over here on the left. This is the strut. This is the sway bar link here. Sway bar is this piece here and it goes across the frame.

So what it does is it keeps the vehicle stable. It reduces body roll. When you go around a corner fast that the vehicle body tends to roll in a certain direction and this,  just transfers some of that movement to the other side of the vehicle and keeps the vehicle more stable. So it's pretty critical for vehicle stability, I mean in the olden days, vehicles didn't have them. Almost every car that I can think of that's been built in the last while, has them, although I do have a Mercedes SL55 that has the active body control, which is a hydraulic suspension. It does not have sway bars because it controls the sway of the vehicle through the struts, it's so quick with hydraulic struts. It can adjust the body roll, you know, in microseconds with just a click of a solenoid and some fluid.

But anyways, this vehicle is different, this is the bottom of the strut, by the way, it does have a variable suspension which is actuated by the struts. It's complicated. There's a lot of things on this vehicle that could be bad. But back to the sway bar, there's a ball and socket joint here that wears out and that's what causes the clunk in the sway bar end link. It's not just a Mercedes thing, like every car that has sway bars will develop clunks and clinks. Some of them are designed a little different, but this ball and socket joint type is very common on many vehicles, Mercedes obviously included.

Let me just divert off a little bit, because I love AMGs. I mean, the neat thing about them is the engine. You got this handcrafted engine by, I think it's Errol Cork. And you know to me among the engines that we opened the hood on, these are nice looking engines. There's the top of the engine. Nice carbon fibre cover you know, the supercharged one, like the SL 55. It has a supercharger underneath, which you can see the top of, but they design these engines beautifully on most AMGs. There is one exception that I find it doesn't look that good.

But here's the cover off. You can see there's a coolant reservoir, the ECU and a number of other components buried under here. So nice looking engine. As I say, the only one, I don't like the SL 65 has a V12 twin turbo. When they put this big plastic cover over the whole top, they kind of really cheaped out on that or never really kind of built it as well as they could.

Mark: Back to the sway bar links. What happens to sway bar links? So it's a ball and socket joint, it wears out. Basically what else can happen with that?

Bernie: Well, once it clunks, it gets to be kind of irritating. Now you think, well, so it's irritating do I really need to fix it? And the answer, you know, like sometimes they will actually wear up to the point where they pop apart and I've never seen a problem with that, but what does worry me is it could happen that it pops apart in such a way that the bar comes out and say pokes the side of your tire and blows your tire apart.

That's to me probably the worst case scenario that could happen. Never seen it happen, never heard of it happening, but it's absolutely something that could happen. So that's why you want to replace them when they start clunking and banging. But the other components of the sway bar system, like on this car it's pretty simple. It's just a steel bar that connects from one side to the other with the links. There's some rubber bushings that attach that to the frame of the vehicle, those wear out. And they can cause a kind of thudding and thumping noise too. So those need replacement from time to time as well.

Mark: So I'm thinking if that comes apart, that's not a good thing, but you mentioned there's other components that need replacement. How often does this kind of stuff wear out on vehicles?

Bernie: They actually wear out fairly frequently. You know, it's a repair we do quite a lot in our shop and it's not just Mercedes it's, you know, any make and model of car they tend to wear out.

So I mean, this vehicle has under a hundred thousand kilometres. It's you know, eight, nine years old at this point in time. So they're worn out. So that's kind of gives you an idea of lifespan. I think you're lucky to get about a hundred thousand Ks out of a set of sway bar links. They do tend to wear out, but it's not a very labour intensive process to replace them and they're not overly expensive on most cars. I will mention that there are some systems of sway bars that are more complicated.

Certain manufacturers have them like a Range Rover comes to mind where they can actually disconnect the sway bar. There's a disadvantage to having a sway bar. And that is when you want your wheels to really move independently from one another, the sway bar kind of keeps the wheels, like the front wheels connected, or the rear wheels connects to a certain degree. If you have a vehicle like an off-road vehicle, like a Range Rover, you might want to actually have that wheel be able to, if you have a big deep pothole or something, or you're going over a rock. You might want to have that extra traveling suspension not affecting the other side of the vehicle. So they actually have a sway bar that will disconnect. And that adds a lot of expense.

I'm sure we've got a podcast about that system because we've repaired them and replaced them. And they're not a cheap repair, but on this Mercedes, fortunately this one's just a straight bar. Pretty simple.

Mark: So this is an awfully cool car for a shooting brake or a station wagon. How are they for reliability?

Bernie: Pretty good. You know, it's a pretty good car. I mean they do have some issues but it is a Mercedes. It's an AMG. It's complicated. There's a lot of extra components and pieces. I mean, twin turbochargers, there are some engine issues, which we could talk about at another time, but I mean, generally they're pretty reliable, but there's a lot of very expensive things that can go wrong on them.

So you know, if you buy one, just be prepared that you're going to be spending way more money on maintenance on this car than you would on on your average vehicle or a lesser model Mercedes for that matter.

Mark: And probably a lot more on fuel, on tires and on brakes because 520 or 50 horsepower is tempting.

Bernie: It is absolutely. And I haven't priced the brakes out on this particular model. It doesn't look like it's got the fanciest of AMG brake packages. Some of them have very, very expensive brake systems and some have good brake systems, but they're not as expensive as others. They're more reasonably priced, but yeah, like you said, these are all like premium fuel vehicles. You know, they're not the best gas mileage, but you know being that is a twin turbo, if you're out in the highway and you're just cruising, you will get pretty good fuel economy for the kind of vehicle that it is. But around the city it's not comparable to Prius or we'll compare it to a Lexus hybrid, since it's in a class above a Prius.

Mark: So you're looking for service for your Mercedes AMG product or any Mercedes or any European or any Japanese or any American product or light truck. The guys to call are Pawlik Automotive. You can reach them at (604) 327-7112 to book your appointment, you have to book ahead, they're busy. Or check out the website pawlikautomotive.com. Hundreds of videos on there. All makes models, types of repairs. YouTube channel Pawlik Auto Repair, same story, hundreds. We've been doing this for eight years. So we've got a lot of product on there. Thanks so much for watching. We really appreciate it. If you like what we're laying down, give us a like. Bernie, thank you.

Thank you, Mark. And thank you for watching. We totally appreciate it.