Bernie: That's good. Well, people keep voting for us in various magazines around Vancouver. So thank you.

Bernie: We will take it. Absolutely. Yes I like it. The good news about this is it will never go down. It's only a credit going forward. So that's a good thing.

Mark: Beauty. So 2012 Range Rover is, today's victim, Evo Q, Evoque maintenance service. What was going on with this vehicle?

Bernie: Yeah so we had a new client come to our shop with this 2012 Evoque. It was due for maintenance. He had a couple of concerns with the check engine light would come on occasionally, but other than that, just a basic maintenance service.

Mark: And how many kilometres were on this vehicle?

Bernie: This vehicle had a hundred and 48,000 kilometres. So, you know, fairly, on in life for sure. I don't know what to say, middle-aged. It's hard to know with cars. Some people think 148Ks is over the hill, but I think, you know, it's not too far gone.

This is a picture of our nice looking Evoque. 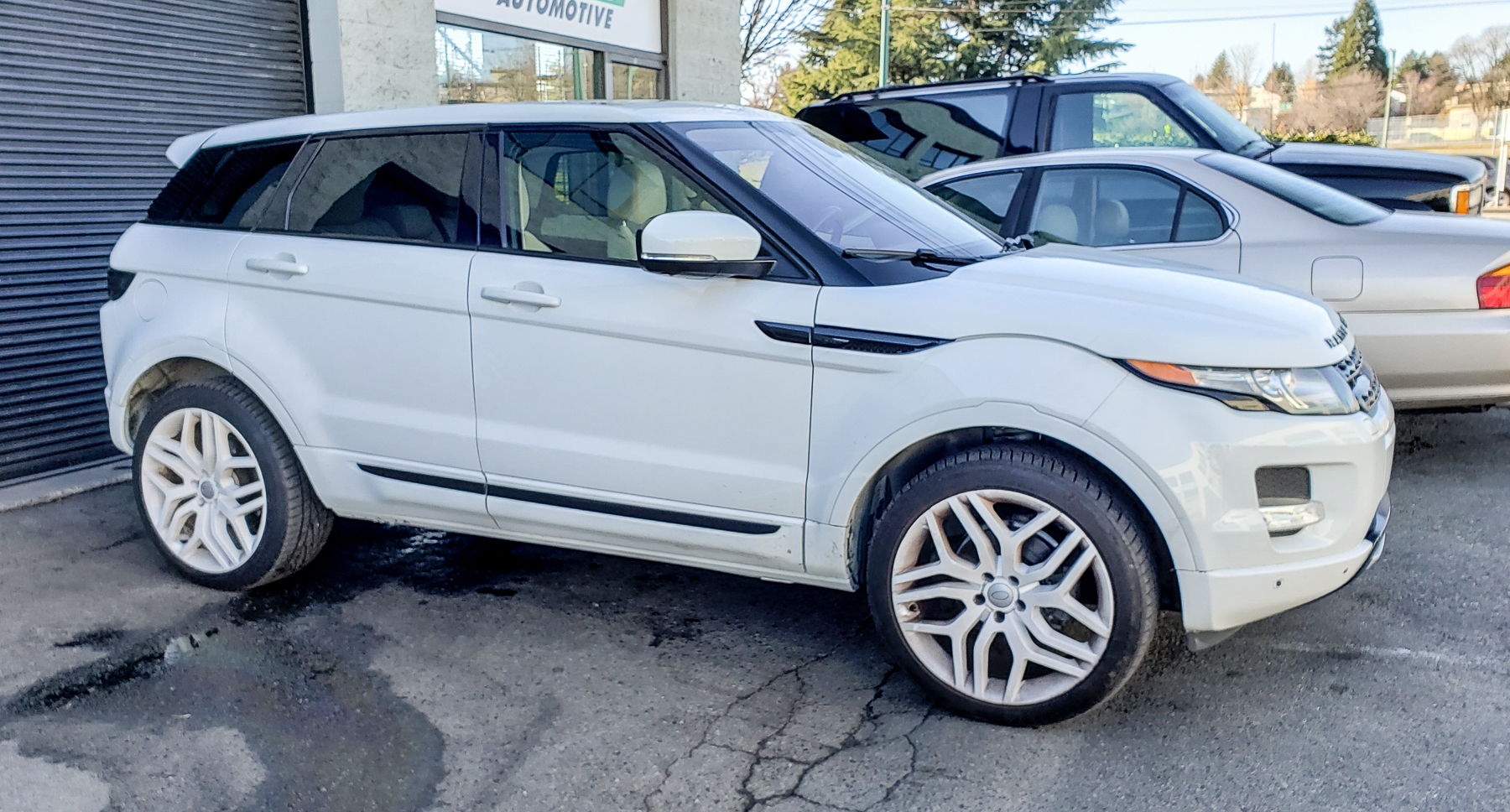 Pretty cool, stylish vehicle. When I got the thing in the shop,  it's a 2012, this is the first model year of this vehicle and you go wow. It seems like they were just yesterday, it was a brand new car and kind of makes me realize how life in the world just keeps on going, you know? Anyways, so yeah, 2012. So this is now an eight year old vehicle.

Mark: And what services were due at this time?

Bernie: So there's a few filters that are due, an oil change of course, and then there's, it depends on which maintenance schedule you follow, there's a number of some other items. And I talked with the owner cause he just recently bought the vehicle, we're unsure of, you know, what the maintenance history was on it.

So there's basically two maintenance schedules that one can follow. And depending on which one you follow, determines some of the other items, like whether to change transmission fluid, differential fluids, and so on.

Mark: So why are there different maintenance schedules? And is that something that's common? We've never talked about that before.

The reason why some of the, some of the differentiating points for the heavy usage schedule are frequent short trips which many of us do. Then there's towing, driving in extremely hot or cold weather. Those are other issues. But that frequent short trip thing is what many people fail to look at and, puts us, I say us, I mean, most people who drive in the heavy maintenance or the severe usage category.

So on this particular vehicle, so for severe usage, the transmission fluid, drivetrain fluids, it's recommended those are replaced every five years as opposed to 10. In this case, the owner didn't want to do that. Fine. That's their thing. And the fluids, we did look at, they seemed to be in still, you know, fairly good colour, you know, not discoloured. Which doesn't always indicate the fluids are bad, but it is an indicator anyway, so you know, for the time being, we'll wait for a couple more years and then we'll do those fluids.

Mark: And were there any other issues with this vehicle?

Bernie: Found a minor oil leak. Other than that the vehicle is actually in pretty good shape. And that of course, I did mention the check engine light was a concern for the owner. We did, as part of the service we do as vehicles scan, record the codes, clear them, and we'd just see what comes up.

But, there was nothing major, you know, in terms of the codes we found. And it's interesting with a lot of these European vehicles, when we do a full code scan, sometimes we'll get up to it like a hundred trouble codes. There was actually 20 in the engine module, but a lot of them are like, you know, little communication error between one computer and another. There's sometimes if a battery's weak, it'll set off a whole number of you know, low voltage in this module. So sometimes you'll get a number of these codes. So we clear them. A lot of times, if you, if you re inspect it or re test it in a week, you'll find this probably like none or maybe one, you know, of some sort. But I, you know, the, the key thing is if everything's working fine, sometimes I find these codes are just, it's good information, but it can be, you don't want to go down the rabbit hole of trying to fix this stuff.

Mark: So no other issues basically, once you looked at the trouble codes?

Bernie: Yeah, it's fine. You know, if the check engine light comes back on and the owner did say that it would sometimes came back on and off, then we're going to need to have it back in for diagnosis. But having cleared away all those superfluous codes, we'll have a better idea of what's actually going on with the vehicle.

Mark: And how reliable are a Range Rover Evoques?

Bernie: They seem to be pretty reliable so far. I'd say so far I mean, they've been around for eight years. It's not the most common vehicle, so we don't see a ton of them on our shop, but so far there doesn't seem to be too many problems with them.

These things use a two litre Ford EcoBoost engine. So that doesn't sound so fancy, you know, compared to Range Rover, but Ford owned Land Rover and Jaguar for a long time and use their technology. And I think you know, in a lot of ways made them much better vehicles. Put them kind of mainstream and where Jaguar was, you know, running out of money when it was the standalone company. Ford put a lot of money in and their technology and really improved these vehicles overall. So this is a two litre, a turbo engine, it's in the EcoBoost family, which you'll find in a lot of other Ford products. So if you want to, if you want the Range Rover Evoque feel for less money, you can probably find a Ford product, but I won't be as nicely built and as the Range Rover and have the fancy features and luxuriousness. It's a really cool vehicle. I mean I always thought, like right from the beginning, the styling is unique and it's a nice size vehicle. You know, and with that engine, it's fairly economical considering the size of the vehicle.

Mark: So there you go. If you're looking for service for your Range Rover product in Vancouver, the guys to see are Pawlik Automotive, you can reach them at (604) 327-7112 to book your appointment in Vancouver. So you have to call and book ahead. They're always busy. Or check out the website, pawlikautomotive.com, hundreds, literally hundreds of videos and articles about maintaining all kinds of cars and problems as well. Thank you for watching the YouTube channel Pawlik Auto Repair, hundreds of videos on there. And of course, thank you for watching and listening to the podcast. We really appreciate it. Leave us a review on Apple podcasts. Thanks Bernie.