Mark: Hi, it's Mark from Top Local. We're here with Bernie Pawlik, Pawlik Automotive in Vancouver. Vancouver's best auto service experience. 21 time winners of Best Auto Repair in Vancouver as voted by their customers. And today we're revisiting an old tried and true topic, a Range Rover Sport coolant leak repair. What was going on with this Range Rover Bernie?

Bernie: Well, it had a coolant leak, it's a Range Rover.

Mark: Okay, thank you. And what did you find this time?

Bernie: We've talked about this a few times, I'm trying to put a little humour into it. Maybe not such a fun subject. But anyways, what we found is there was a coolant leak coming from the engine. There's a plastic coolant pipe that from the upper radiator hose thermostat area that goes down under the intake manifold in that pipe, plastic pipe had cracked.

Mark: Plastic, plastic. What was the, what was the mileage on this vehicle?

Bernie: Yeah, really, really low mileage. Only 63,000 kilometres. So, I mean, you know, to me that's just a barely broken in vehicle, you know, 2012, so it is eight years old. But that's still in the, and my, my thinking and with that low mileage, really not that old but nonetheless, you know, it's plastic. We run into it.  We talk about this a lot on our podcast, a variety of vehicles, to be fair to Land Rover and Range Rover.

Mark: So what's involved with, with this repair?

Bernie: So this repair, so this is a non supercharged model. What was involved is removing the intake manifold, and from there we were able to access all the…and I'm actually show some pictures right now. 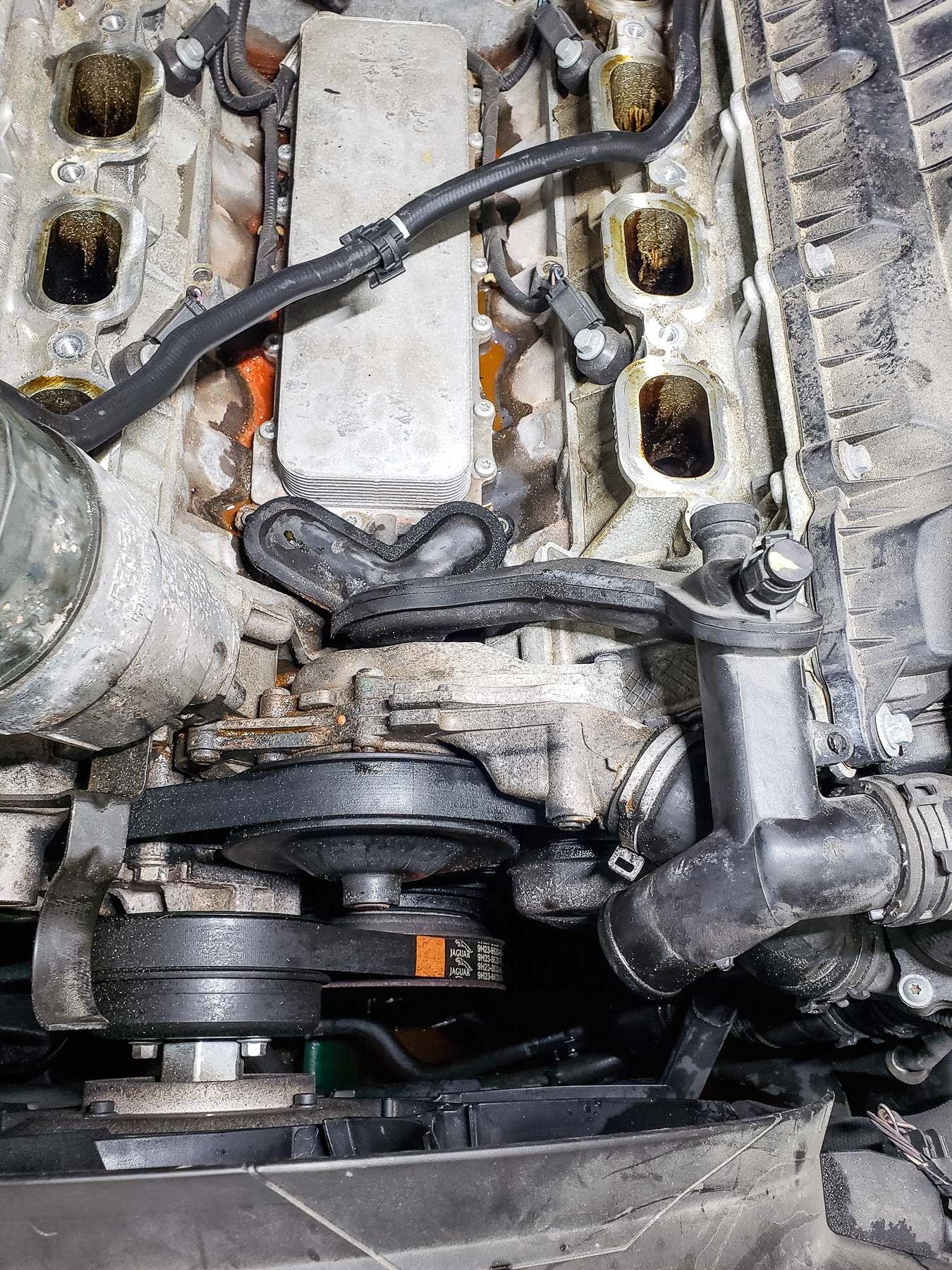 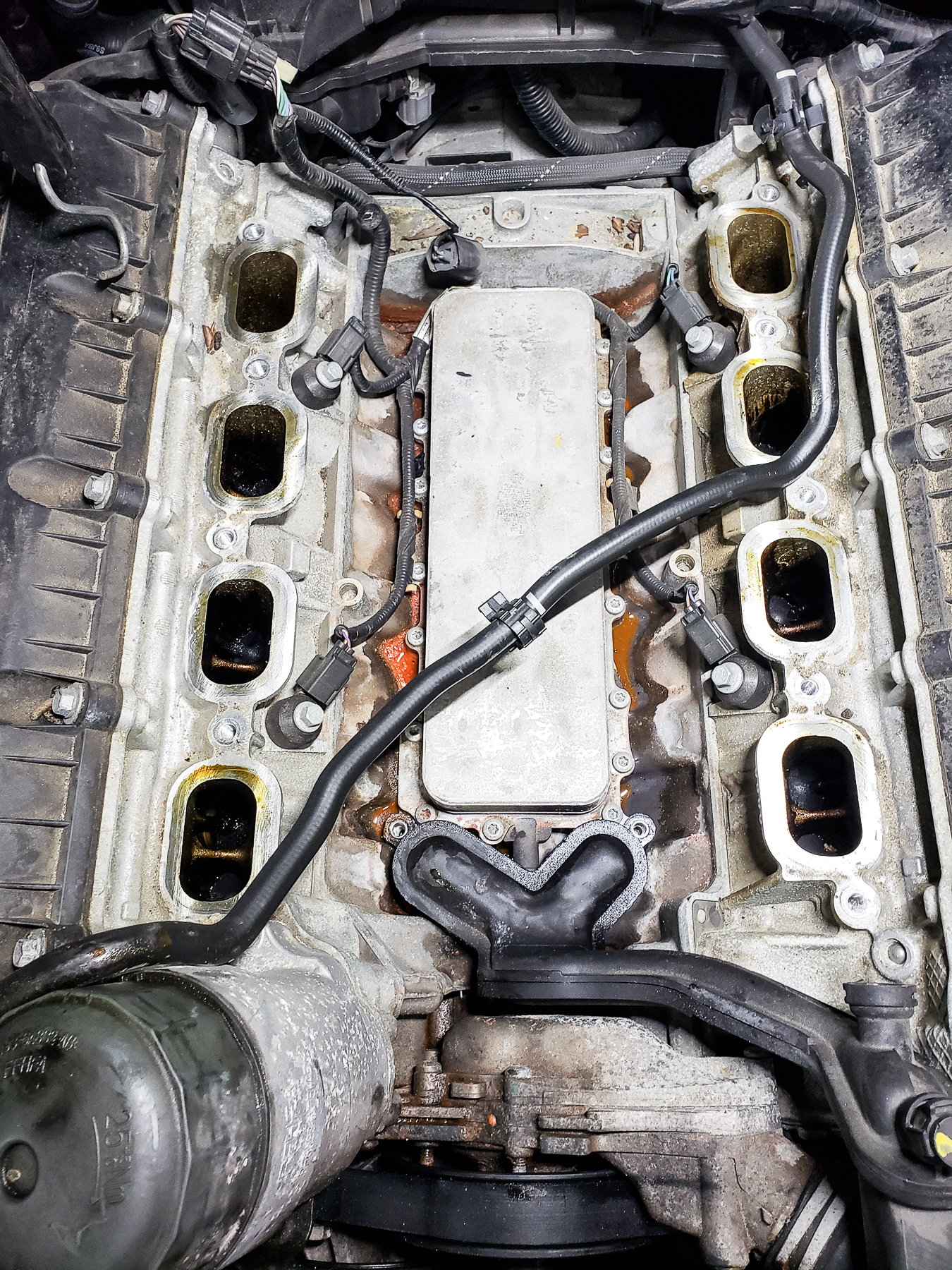 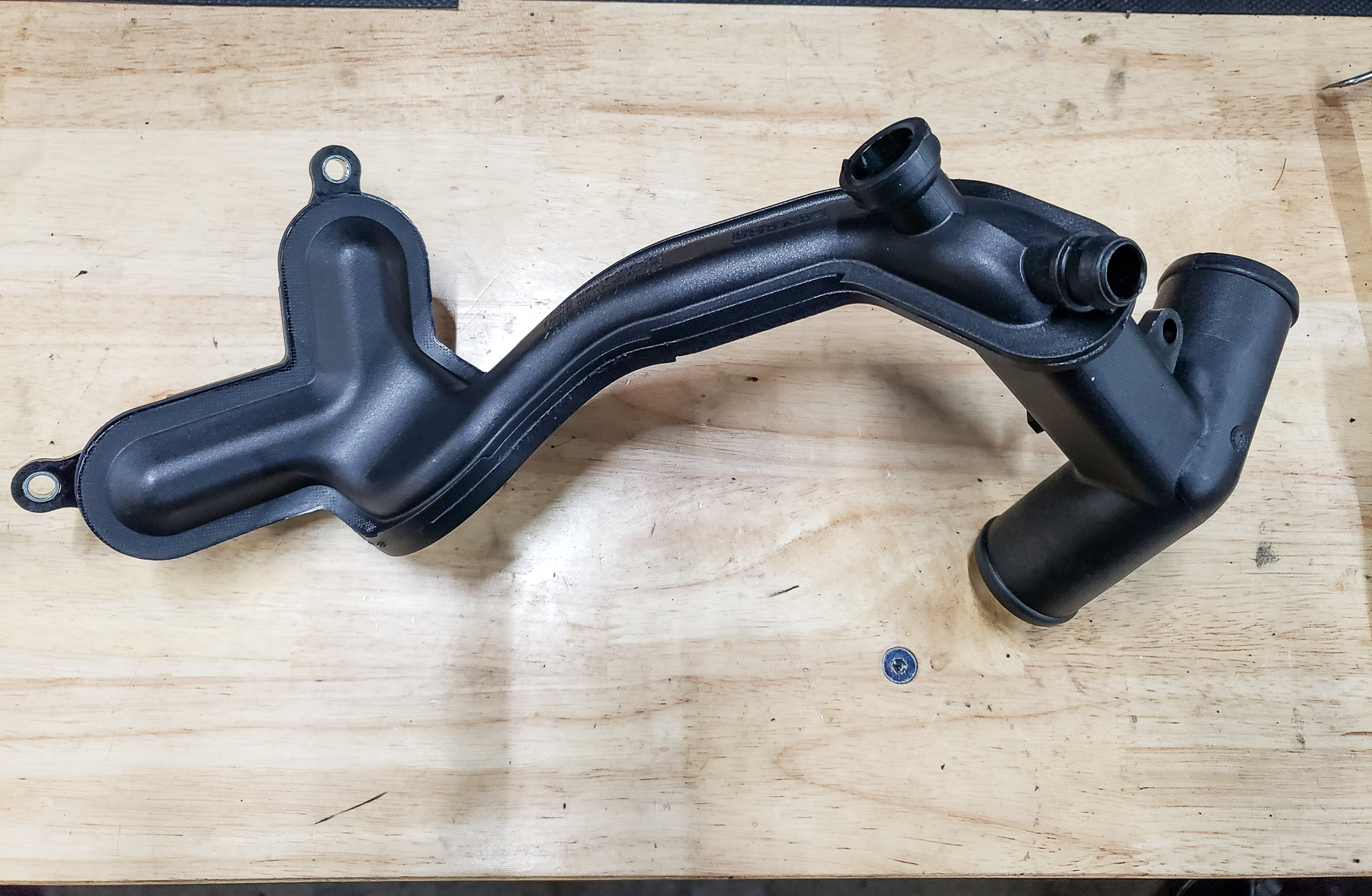 We're actually able to access the coolant pipe and do the repairs. So once that's off, the repair's much simpler to do. Impossible with the intake manifold. Here's a, basically a view of the engine compartment with the intake manifold removed. These are the intake ports into the engine. This is another coolant hose, we changed that which runs under the intake manifold. Kind of makes sense to change at the same time. This is a rubber hose, but these do fail usually when the vehicle gets older. But make sense to do it while this is out, because you know, if all is done well, this won't need to be removed again for another eight years or so.

We'll have a look at some other pictures here. So again, here's another, another view, looking more straight down in the engine compartment and you can see the assembly here. There's a crack somewhere in here. I'm not certain exactly where it is, but you can see this orange colour down here. That's the antifreeze, the coolant that they use in these vehicles. And a view of the new part held down by a couple of bolts and everything, pieces clip in, some hose clamps, other items just just fit together with clips and pop together. So that's our picture show for today.

Mark: Are there any more durable replacement parts available for this repair?

Bernie: It's a good question, for Land Rover, no. There we basically need to replace everything with the same type of plastic material that was there before, unfortunately. But for certain cars, like BMWs use a lot of plastic components and they have replacements on certain models where you can actually buy a metal, say a metal thermostat housing. Or water inlets are available in metal, which is a really good option because they won't fail again. I mean, the gasket may, the gasket, that part of it may seep or leak, but certainly, the housing itself won't fail. And a lot of times the problem comes from a housing failure. So unfortunately for Land Rover, Range Rover, we're pretty, well pretty much stuck with the plastic. But you know, and other models that we work on, there are options available and we do use them whenever we can.

Mark: We're not really showing it, but there's actually a lot of part removal to get to be able to take the intake manifold off on these vehicles. Is that, am I assuming right there?

Bernie: Oh, absolutely. Yeah. It's quite a few hours worth of work just to change this pipe. I just showed pictures of the easy stuff and not with the, not with the manifold on, but there's, you know, it certainly takes a little while to remove that manifold, get it out of the way and then change all of the pipes and hoses. So you know, when, after that, of course, then it's a matter of bleeding the cooling system out. You've got to remove all the air from the system and with a lot of modern cooling systems there I mean, it's always been an issue in every car since I, you know, as long as I've worked on cars, getting air out of cooling system.

But it can be even more complicated on modern vehicles because they have many hoses, many passageways and little nooks and crannies where air can hide and cause the engine to overheat. So we actually have special filling equipment, which is pretty awesome. It actually vacuums the cooling system and sucks everything in. So it really speeds up the whole process. But it, you know, again, that's kind of an involved part of the procedure.

Mark: So this is a non-super charged engine. What, is it a better engine than the supercharge variety?

Bernie: Well, it depends. It certainly doesn't have more horsepower, which is, I mean, which is a nice feature with the supercharge engine. I mean the supercharge engine really goes fast, which is pretty awesome and nice immediate power. But I tend to find these engines are probably a little more durable. We haven't done a timing chain on one of these non supercharged engines yet. I say yet, because it probably happened, but I think it was a supercharger it really, you know, the engine speeds up. The internal acceleration in the engine is so quick when you throttle it, the timing chains are, are an issue in these vehicles. And I think they, you know, there's the supercharger, they, they weren't really built tough enough to handle that. So, I'd say, you know, overall, and of course a supercharger is an expensive item in and of itself, on top of the engine. So with a non-super charge engine, you immediately don't have that. So I think, I think you'd probably get a little more durability out of the non-super charged, but less little less thrills.

Mark: So there you go. If you're looking for a service for your Range Rover in Vancouver, the guys to see are Pawlik Automotive. You can reach them at 604-327-7112 to book your appointment. You have to call and book ahead because they're always busy. Check out the website at pawlikautomotive.com, hundreds, over 600 articles on there about all makes and models and all types of repairs. Of course, there's the YouTube channel Pawlik Auto Repair where we have, again, hundreds of videos again on all makes and models and repairs. And of course, thanks for much for watching or listening to the podcast. We really appreciate it. Give us a like on iTunes or Spotify and thanks Bernie.

Bernie: Thanks, Mark. And thanks for watching.