Mark: Hi, it's Mark from Top Local. We're here with Bernie Pawlik, Pawlik Automotive in Vancouver, BC, Canada in the midst of the lockdown COVID craziness times, and we're talking cars. And Pawlik Automotive is of course, 22 time winners of Best Auto Repair in Vancouver as voted by their customers. Today we're going to talk about a fairly popular vehicle. A BMW 328i. How are you doing this morning, Bernie?

Mark: So what was happening with this three series BMW?

Bernie: So the car is a 2013 328i. The owner had a couple of issues. One was, an oil leakage, some warning lights on the dash, the engine didn't feel like it was performing properly, possibly some misfires. So those are the client's concerns and things that we looked at.

Mark: And so you did some diagnosis, what did you find?

Bernie: Yeah. So we start with a scan tool diagnostic. We basically hooked the scan tool up, did a full code read of the vehicle. There was a couple of codes in the engine, did a visual inspection of the vehicle and noted a lot of oil leakage. It was severe.

There was oil leaked out everywhere, all over the top of the engine, the bottom, sort of the usual spots that we might find oil leaks on this engine, like around the oil pan gasket area. It was oil around the oil filter, housing area down the front of the engine and in a lot of spots. But of course, without cleaning things up and doing proper diagnosis, it's hard to tell where it's leaking from. And we don't want to sell a bunch of work the customer doesn't need.

So first step, we did an engine shampoo. We cleaned it up thoroughly.  And then ran the engine and noted immediately an enormous oil leak coming from the oil filter cap housing area. Actually where the cap sits, there's oil leaking right between the cap and the housing.

The other thing we noted was the engine oil service was way overdue, like by thousands of kilometres. So first thing we proceeded with was an A service, an oil service on the vehicle, and sealed that all up. And then we proceeded from there. We figured a lot of the problems with the engine may have actually been due to the fact that the oil level was a) low and b) just very old. So that's kind of where we proceeded.

I'm going to show a picture here actually of the oil filter while we're talking. So this is actually the car. It's as a 2013, you know, a classic BMW three series, you know, definitely their most popular model. Four door sedan. Nice vehicle for sure. 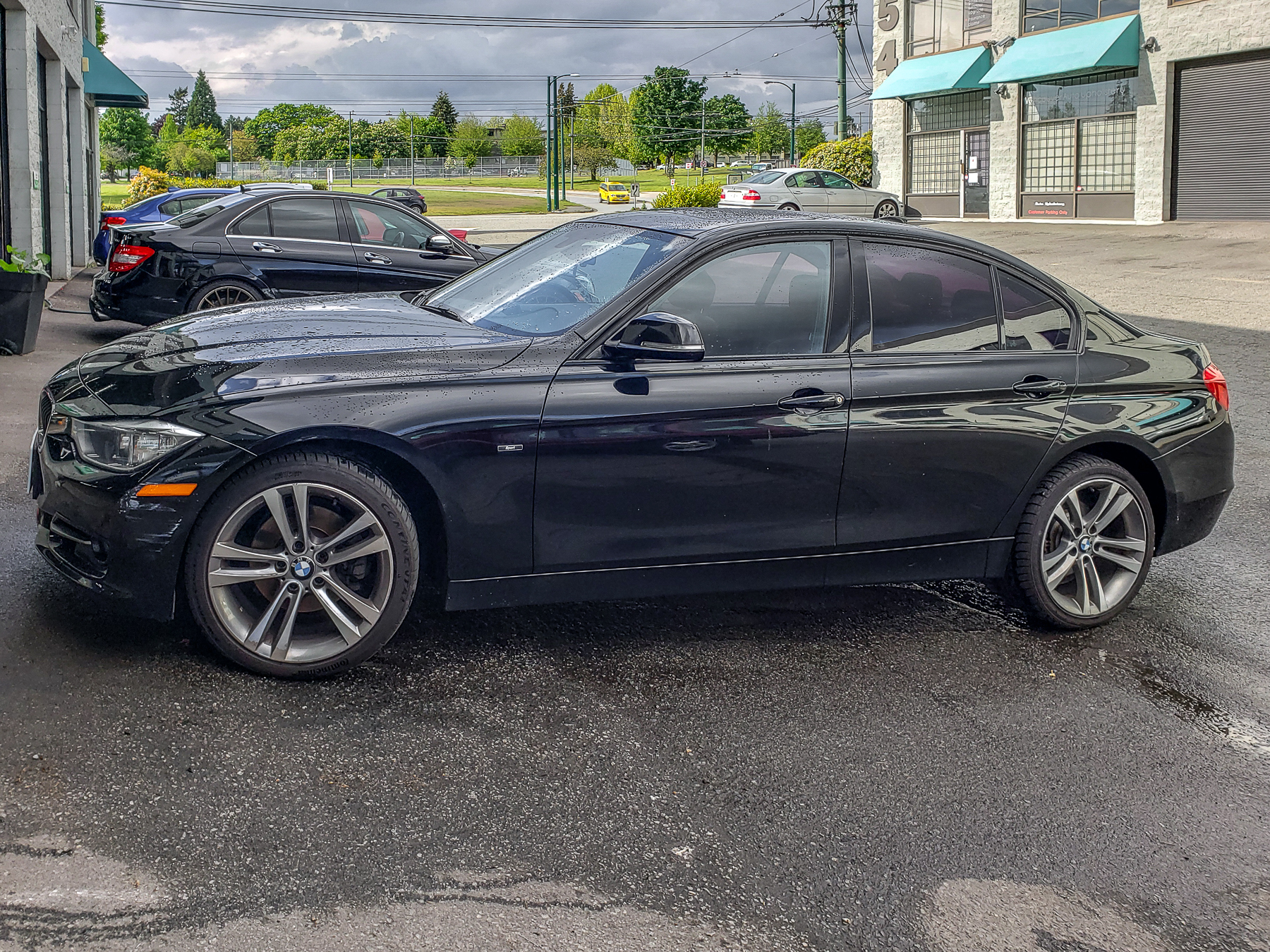 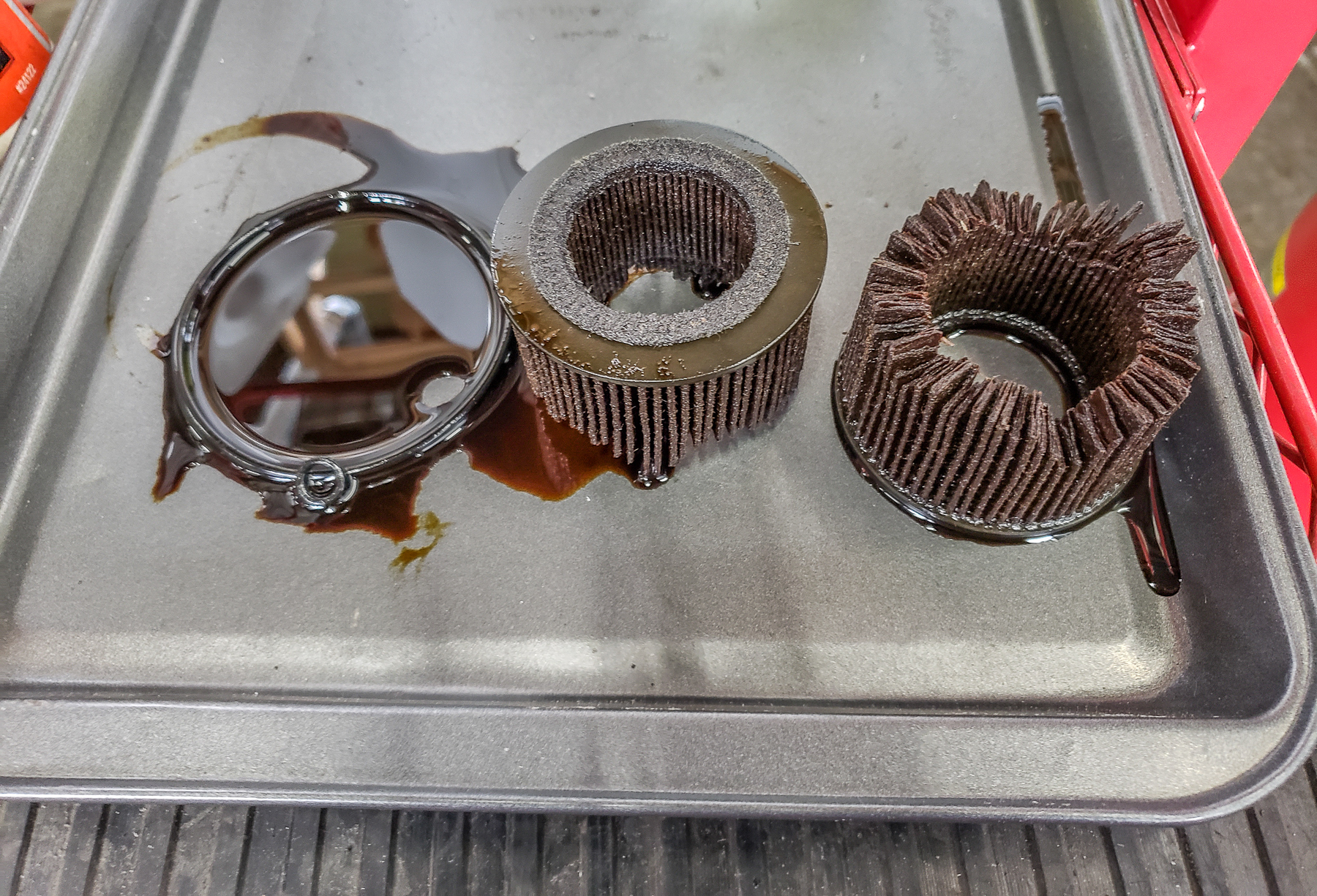 This is what the oil filter looked like. So we took the oil filter out. It had been in there so long, it actually just broke in half when we took it apart. This is the O ring seal that goes around the filter cap. I don't have a picture of the filter cap. It's basically a plastic cap and there's a replaceable seal. The seal is hard as a hockey puck. I mean, if we grabbed it, we could probably crack it in our hands. It was so hardened. So this is why the oil was leaking out. I mean, the filter,  this is not uncommon when we see vehicles that have been way overdue for oil services. Mercedes or BMWs, any cartridge filtered vehicles. The material just breaks down and it goes hard and it just cracks apart.

Mark: Which engine is this?

Bernie: This is a two litre turbocharged engine. So BMW has done something interesting in the 2011 model year. Instead of using the six cylinder like they did in most models, or they did, in the say the three series that they had some four cylinders as well. You can usually tell the size of the engine by the number of the vehicles, say a 328. It would be a 2.8 litre engine. A 318 for instance, would be a 1.8 litre, which is a four cylinder. But now they've kind of got away from that and they changed the numbering around, but that doesn't necessarily reflect the displacement of the engine.

Of course there's performance modifications, and they can make it a higher performance model. But you know, for an average driving car, you're really getting the best of both worlds. Fuel economy performance, reduced exhaust emissions, everything in one bundle.

Mark: And this is a four cylinder, rather than the old kind of tried and true six cylinder that they used for decades.

Bernie: Yeah, it is. It's a four cylinder. And they still make the six cylinder models, you know, with all of this technology as well. But they've gone down to the four cylinder in a lot. They use it in X3's, you know, the three series sedans and coupes, you know, so it's awesome. I mean lots of power. I can't remember the actual, I think it's 250 horsepower or something like that, which is pretty damn good, you know, for a little engine like that. And it's a nice compact engine too. There's a lot of room in the engine compartment because you can put a six cylinder engine in there. So it's actually nice to have a vehicle that has some, some extra space in an engine compartment that they haven't just crammed it all full of everything.

Mark: So as you mentioned, probably the height and what really all of the current popular auto manufacturers, or what we consider the historic auto manufacturers, are the best that is making really high performance or really efficient gasoline or diesel powered internal combustion engines. And are they ready for the future?

Bernie: Are they ready for the future? Well, they're trying. This could be a whole separate podcast. I know we talked earlier about Volkswagen and how their ID series is sitting idle. Maybe that's what the ID stands for, idle, due to software problems.

Whereas another manufacturer, like Tesla for instance, it started off more as a software company and a unique manufacturer. And they've kind of taken things in a different direction. I mean, I have no doubt that a lot of, you know, like the original car manufacturers are going to come through with some pretty neat cars, but they're just, you know, they'll muddle their way through for awhile and some of them probably won't survive.

Mark: So you've talked about the value of scheduled maintenance many, many times and how doing that, when it's due and how important it is for internal combustion engines and especially BMWs. But also many other manufacturers as well, especially with these high performance tweaked to the nines engines that are doing the very best possible way that they can. So what can happen when you leave your oil changes too long?

Bernie: Well, of course, we already looked at this picture of this oil filter. You know, that's not a good thing. This is supposed to filter and clean your oil. So I mean that's just one little thing that you can see. But I talked about all the technology in this engine. I mean, all these things require clean oil. When you start getting sludge, which builds up when you don't change your oil enough, it blocks things off. A variable valve timing system stopped working, and this isn't a BMW only thing. This is any car Japanese, North American, European, anything with an internal combustion engine. Clean oil is so critical for performance. Even carbon deposits that occur with gasoline direct injected engines can increase when you don't change your oil frequently enough. So that causes other performance problems with the vehicle.

So there are so many reasons to change your oil regularly that it's just so important. That's all I can say.

Mark: And how often should this type of BMW get serviced?

Bernie: Well, I know the manufacturer, when we reset the oil service interval on this vehicle, it said next service due 17,000 kilometres. My opinion, that's way too long. But you know, the owner of this vehicle left it way over that interval like by probably 10,000 k's I believe so. You know, and we see this often, people just, they get busy or they, whatever happens they don't do it. But even 17,000 kilometres is too long. I mean, really, in my opinion, and I think a lot of other people in our industry, 10 to 12 is probably as far as you should go. You know, when you change the oil at that interval, it's not so dirty. It's still got some cleanliness to it and hasn't deteriorated to the point that you get when you leave it way too long.

Mark: So there you go. If you're looking for service for your BMW in Vancouver, regularly scheduled service to make sure you get the maximum life out of your vehicle, the guys to see are Pawlik Automotive. You can reach them at (604) 327-7112 to book your appointment. You got to call and book ahead. They're always busy. Check out the website, pawlikautomotive.com, hundreds of videos and articles on there about repairs of all makes and models of cars. Pawlik Auto Repair is the YouTube channel, hundreds of videos on there. Of course, thanks for listening to the podcast. Leave us a review wherever you're picking your podcasts up from, and thanks, Bernie.