Mark: Hi, it's Mark from TLR. I'm here with Bernie Pawlik, Pawlik Automotive in Vancouver. Vancouver's best auto service experience and 24 time winners of best auto repair in Vancouver as voted by their customers. We're talking cars. How are you doing Bernie?

Mark: So today we're talking about a 2013 BMW X3 that had a rear wheel bearing issue. What was going on with this BMW?

Mark: So after you do the road test, what's your next step?

Bernie: Yeah, so we basically put the vehicle up on a hoist and have a listen to each bearing with the stethoscope. And the great thing about this vehicle being an x drive or all wheel drive is that we can actually run the vehicle and we can get the wheels spinning up the road speeds and listen with a stethoscope. And we can listen to each wheel bearing. And found that the left rear wheel bearing was very much noisier than anything else in the vehicle. So there was a slight noise at the right rear side, but definitely the left rear was distinctly the worst sound.

So when you do a road test, the wheel bearing sound is kind of distinctive, in that it increases with speed and often if you're moving the steering wheel, so say you're turning the wheel and sort of banking a curve, or just kind of changing the load on the wheels, it'll often change the tone of the noise. So that can usually be a pretty good indication that it's a wheel bearing. Not a 100% guarantee without listening to the actual wheel bearings on a hoist, but it's usually a pretty good diagnosis. Gets us in the right direction.

Mark: So what's involved in replacing this bearing?

Bernie: Well, basically the brakes have to come off. I'm going to actually put some pictures up while we're talking. 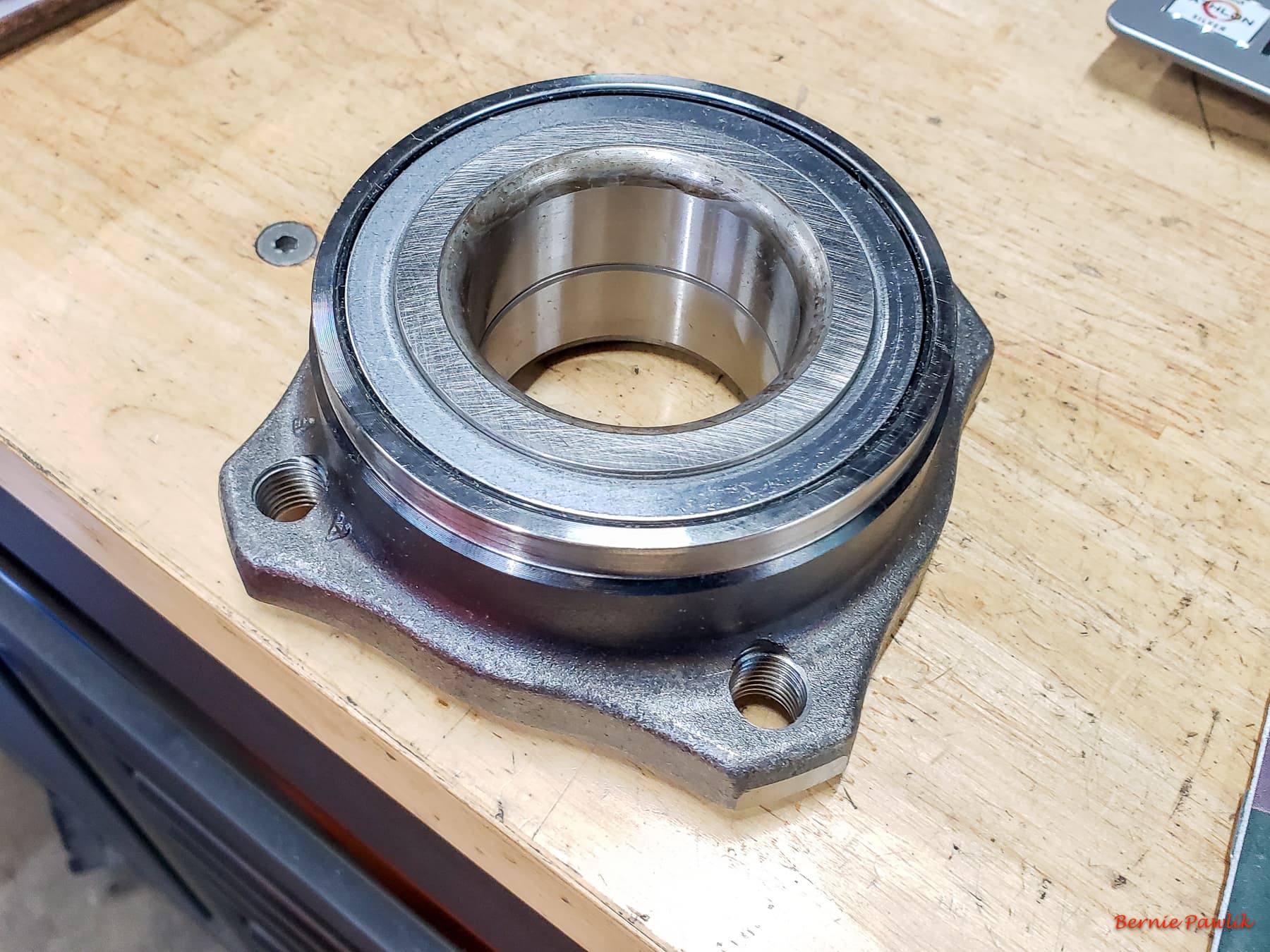 So this is the new replacement wheel bearing. This section here bolts onto the rear knuckle, the wheel hub goes in the middle here. 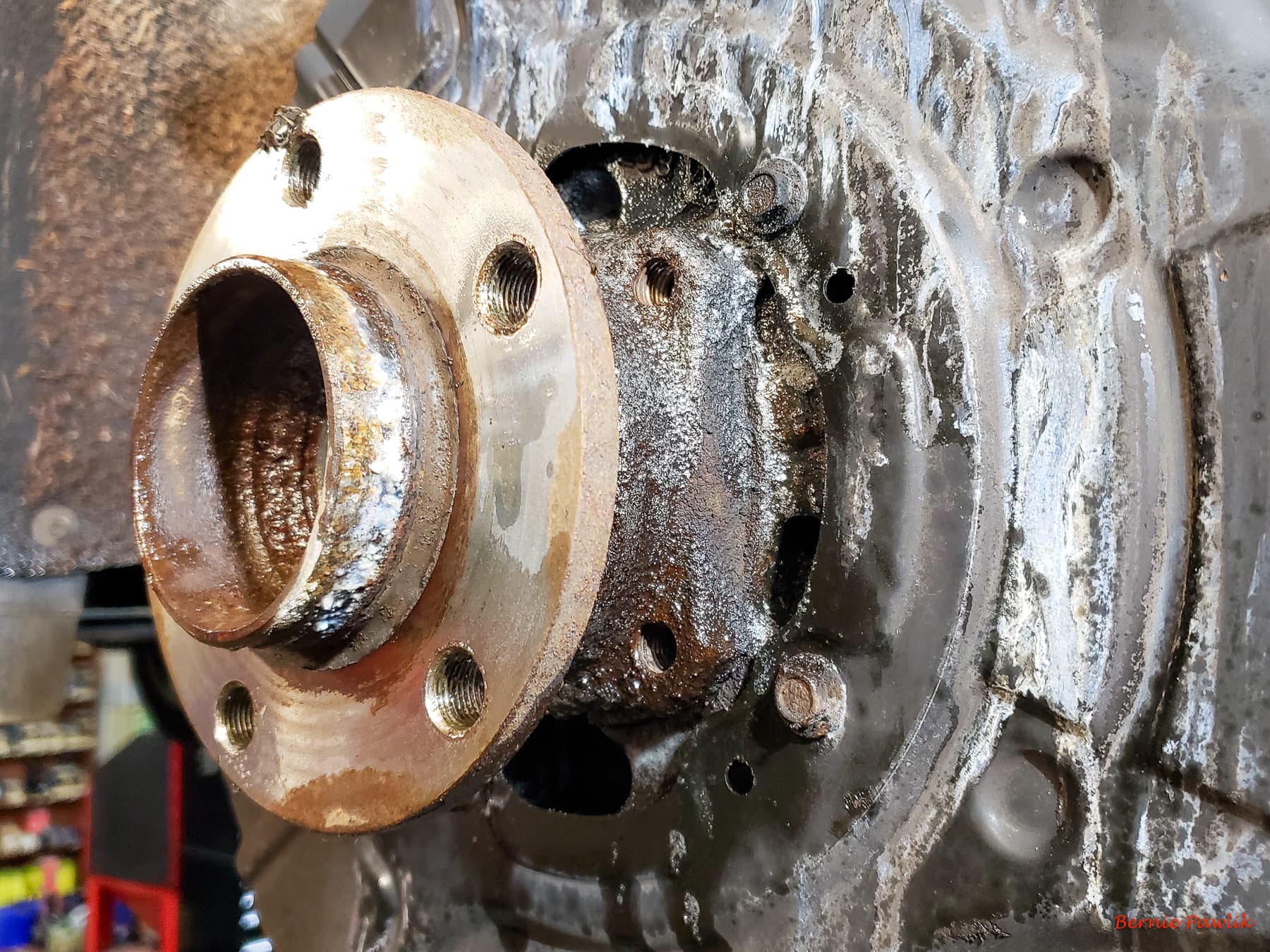 And this is a much uglier picture. This is the old wheel bearing in the car. You can see a lot of corrosion. You know, that kind of happens over time. This vehicle may have come from a slightly saltier climate than we're used to around Vancouver.

But you can see the actual bearing assembly here and then the hub where the wheel bolts up to here. Of course, the brake rotor slides on to here first and the brake pads and calipers. There's also parking brake mechanism in here as well, which had to be removed to do the job. 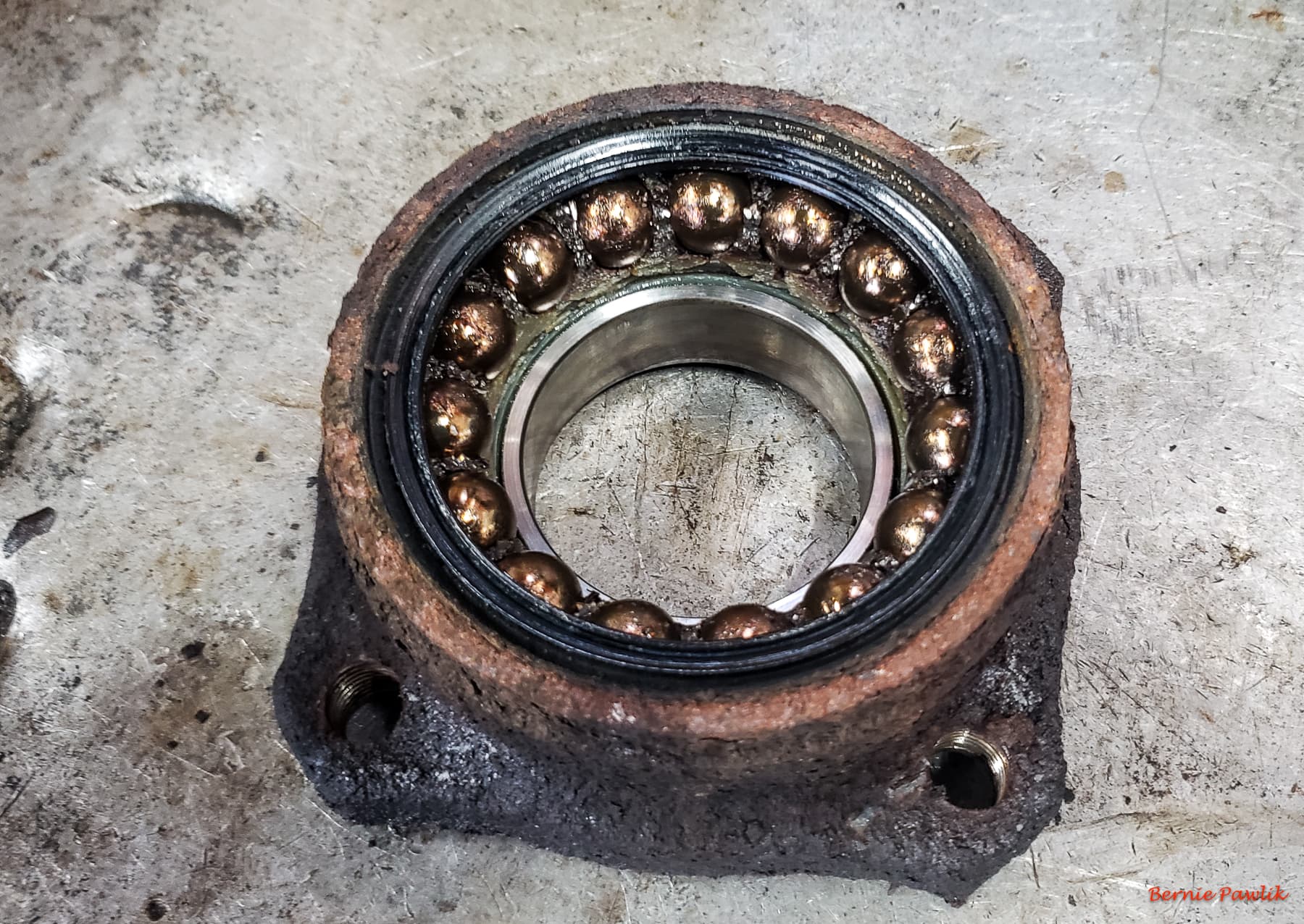 And finally, that's what the wheel bearing looks like when it's taken out. When we take it off the hub one of the bearing races usually comes off with it. We have to pull that off separately. And that's basically the ball bearings, there's two of them. So this is a ball bearing style, some use roller bearings, but most of the ball bearings.

So what's involved, I think the pictures kind of showed a bit there. The hub has to be pulled out of the bearing and then transferred onto the new bearing assembly.

Mark: So do the hubs sometimes need replacement?

Bernie: Occasionally they do, but not very often. And depending on the vehicle, a lot of vehicles actually come with a bearing and hub all is one unit. So it makes the job actually easier because it's just one less step we have to do. But of course, it's another chunk of metal that's wasted, that normally can last for a lifetime of a car.

But occasionally we will find, especially on an exceptionally badly worn wheel bearing, sometimes we'll take it out, we'll pull a hub out and find that one of the sections of the hub that the press fits into the bearing is actually worn out. It's I guess it spins on the race and it eventually wears it out. Not very common, maybe like one out of 20 times it'll be like that. So sometimes the hub needs to be replaced, but not very often.

Mark: And how often, what about wheel bearings? How often do they have to be replaced?

Bernie: Well, you just replaced them when they wear out. And not very often. I mean, we don't do this job very commonly. We work on a lot of X3s. It's not too common that we replace them. They just wear out from time to time. But you know, a lot depends, I guess, on where you drive your vehicle. If it's somewhere that's had a lot of road salt, that's harder on a vehicle because it'll come in and attack the seals, you know, it'll break the seals down and water gets in. That's a surefire end to the bearing. But they're generally pretty reliable on X3s and most BMWs in general.

Mark: Is there anything that an X3 owner can do to prolong the life of their wheel bearings?

Bernie: Not really because they're all sealed units, so they'll just wear out on their own time. Things like hitting curbs can be something that can damage wheel bearings. I think too if a vehicle sits for a very long period of time it can actually cause pressure on certain spots of the bearing. But, you know, again, that that'd be like sitting for like years. So it's not something that would normally happen. So really there's not much you can do just, I mean, it'll just wear out in its own time and you just replace it when it needs to be done.

Mark: And how are BMW X3s for reliability?

Bernie: I'd call them fair. I mean, more stuff goes wrong with these vehicles than maybe they should. Things like oil leaks, coolant leaks, there's a lot of plastic cooling system parts that tend to wear out, ignition coil, spark plugs, those sort of things, especially ignition coil.

So there's, there's quite a few things that do tend to go wrong in these vehicles over time. But I mean, there, it's certainly a very nice vehicle. I mean, I own one myself and, you know, there's things that happen to them, but you kind of pay a little bit of a premium for it. And you will have more repairs than a Lexus say, which has to be a comparable vehicle.

Mark: If you're looking for service for your BMW, any version in Vancouver, the guys to see are Pawlik Automotive. You can call and book your appointment at 604-327-7112. Or you can book online at pawlikautomotive.com.

They'll call you back. They'll get ready. They'll make sure that they're going to do a great job for you when you show up for your appointment. You have to call and book ahead. They're busy. Check out the website, of course, pawlikautomotive.com. There's hundreds of videos on there, not a stretch at all. 10 years, we've been doing this. All makes and models and types of repairs. The YouTube channel is the same story. Pawlik Auto Repair, check it out. And thanks so much for watching and listening. We really appreciate it. Thank you, Bernie.