Mark: So today we're talking about a 2013 BMW X5 was having a misfire problem. What was going on with this vehicle?

Bernie: So this vehicle just limped into our shop. It wasn't running very well at all. Check engine light on and blinking, and just a very poor running, say barely ran.

Mark: So what kind of testing and diagnosis did you have to do?

Bernie: Well, first thing you know, we like to do a road test, but it wasn't really necessary to road test it. Driving into the shop was enough of a road test this time. We drove it in connected our scan tool, found a number of misfire codes in a variety of different cylinders. This is a V8 engine, so they can be up to eight misfire codes for the individual cylinders. Plus there's a random misfire code that will often go off that doesn't define which cylinder is occurring. Don't have a list of codes in front of me, but basically there's a number of misfire codes and we knew there was either a problem with either a cylinder issue, spark plugs, ignition coils, or fuel injectors. Those are kind of the suspects and probably more likely coils. Coils or spark plugs would be the most likely candidate.

Mark: So how do you determine whether it's the coils or versus the injection?

Bernie: Well, this is a little bit of a complicated one because the design of the engine. So this is a twin turbo V8. It has the turbo chargers located in the middle. And BMW has nicely put covers over top of everything, including the ignition coil. Usually on the six cylinder, once you pull a top cover, you can access the coils, we can test them or swap them around and do a variety of things.

But with this one, it's so much work just to get at the coils and plugs. We really need to do our due diligence and diagnostics before we even pull everything apart. So there was a few tests, data we were able to observe on the scan tool and concluded coils and spark plugs were the place to start.

Let's look at some pictures right now. We can have a look at what's involved. So there's the view of the engine with the covers on top. This one's a little dusty and dirty, but you know, kind of an attractive looking engine. And what is revealed underneath that cover is the following. 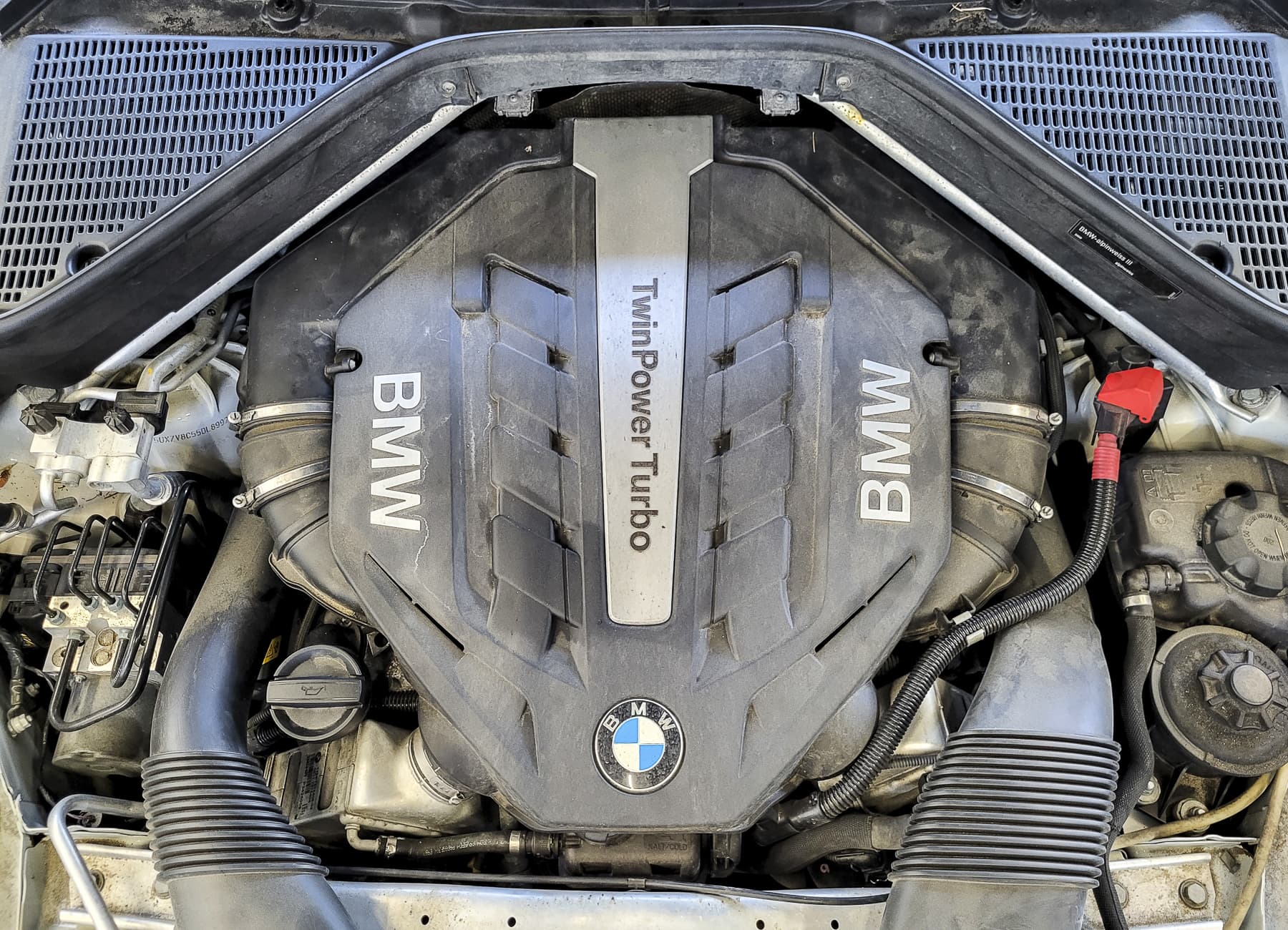 Let's have a look here. This is with the cover removed. So we've got the air filters over here, located here. These are the turbocharges located under here. We'll just do a little drill down here. Now, we still haven't seen the spark plugs and ignition calls because they sit underneath the air filters. 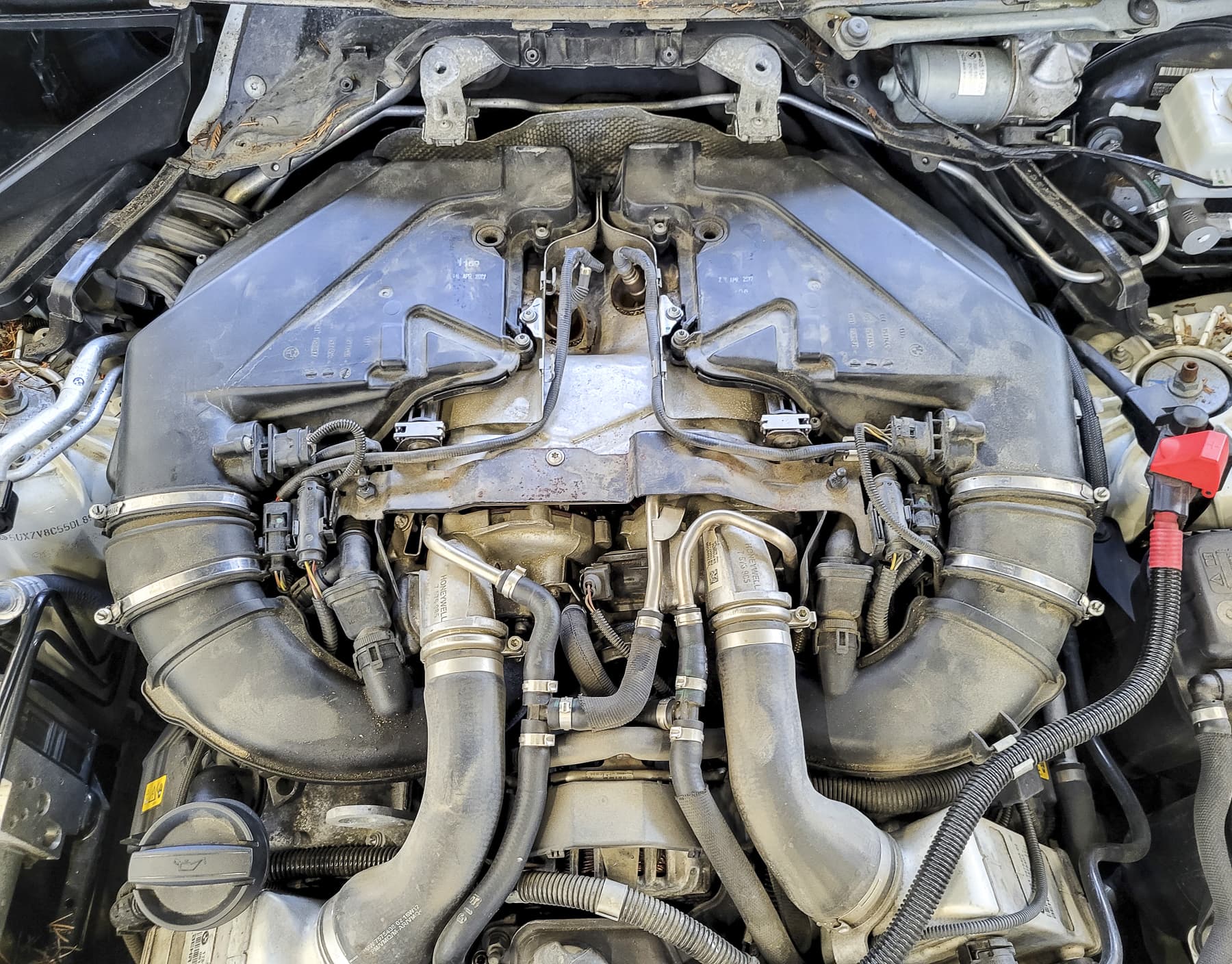 You can see some of the cowl items are up here with the cabin air filters located up here. So all these items need to be removed just to access this area here, these bars. So there's a lot involved just to get to the spark plugs and ignition coils.

So we have that view again that we looked at, then we're gonna drill down a little further. So that's what the air end takes off. So now we can actually access the ignition coils, which are located on either side. And we simply removed the spark plugs and the ignition coils did a visual inspection. 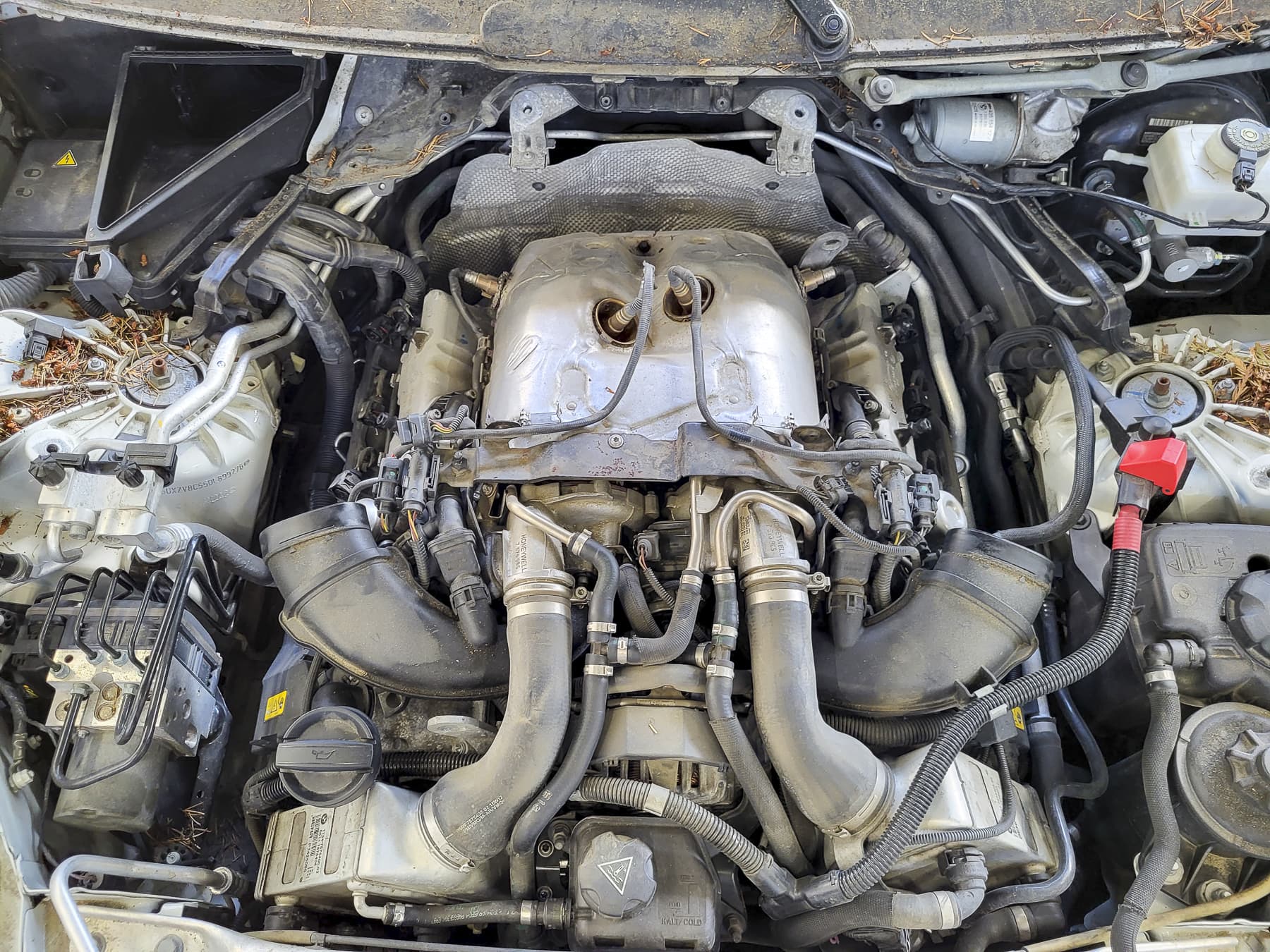 There was one spark plug we could see wasn't quite burning, the colouration of the spark plug was a little different than the others, but it wasn't one of the cylinders was actually having a misfire. So there wasn't much more to do with that, but it's just an interesting bit of information reading the spark plugs to see what might be going on. Slightly different combustion going on in that cylinder than the others. 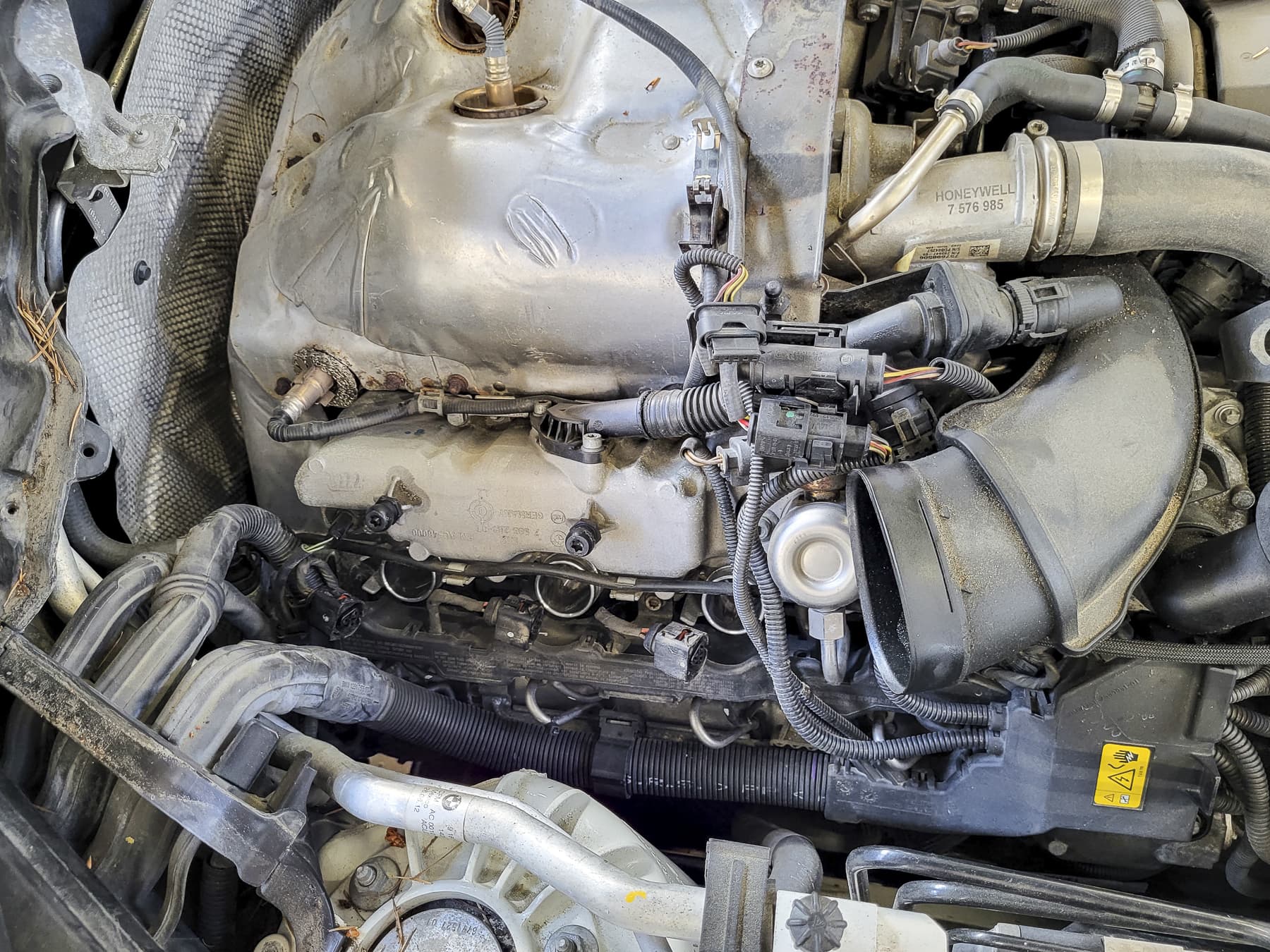 This is the right cylinder bank with the spark plugs removed. You can see sort of the boars where the spark plugs are. Again, kind of gives, you know, from the other pictures, it gives you an idea how much we had to remove just to get at this.

And there's our view at the ignition coils back in place. 1, 2, 3, 4. And that's pretty much the picture show. 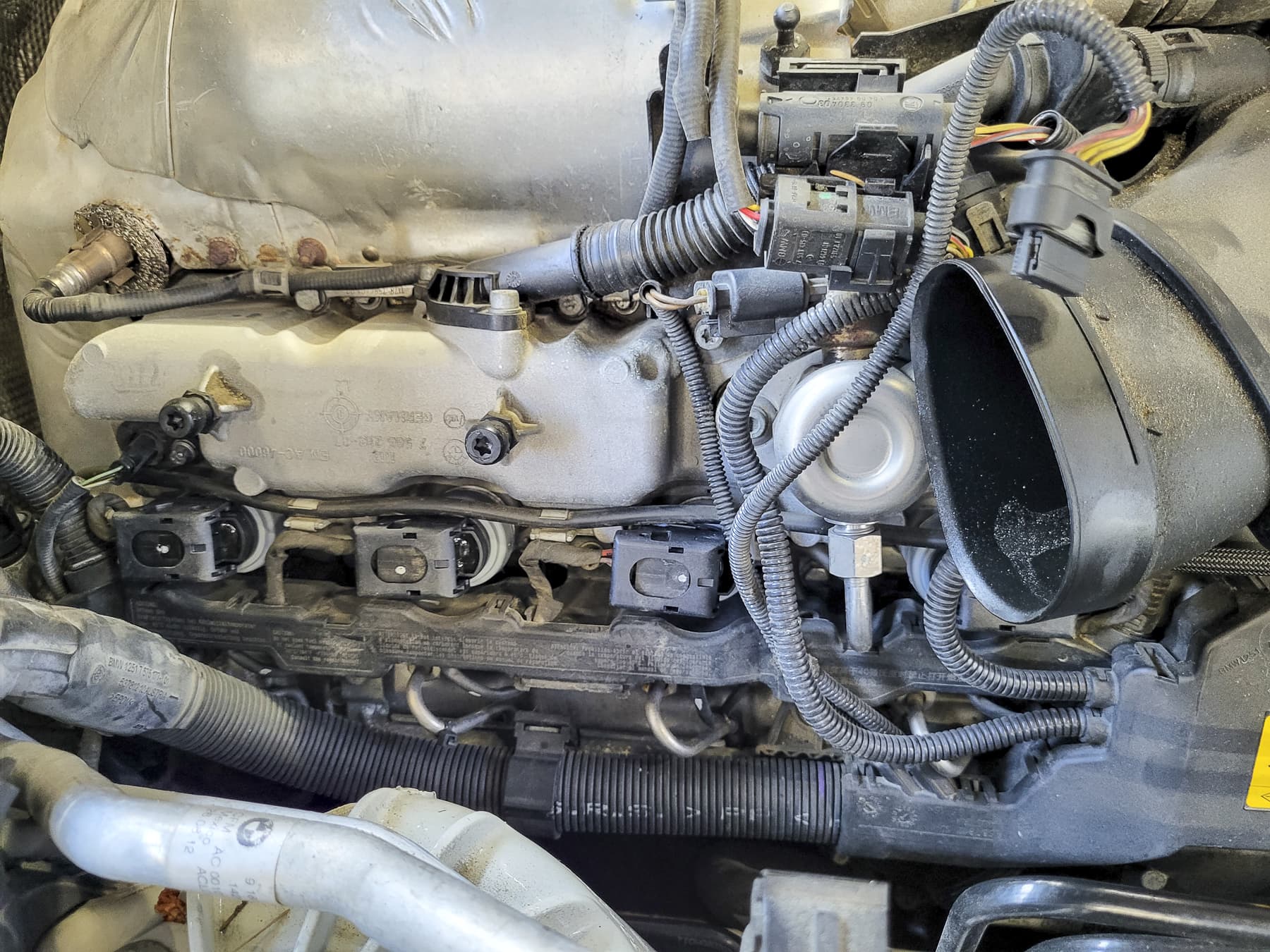 I did actually want to speak of one other item too. So the air filters were dirty. You can see. And so it was a good time to replace them, but I was a little appalled by the wastefulness of this. This is the air filter. When you buy an air filter for this vehicle, there's two of them. This is what you get this big, huge piece of plastic that you chuck in the garbage, along with a paper filter, which could have been sold just as the paper piece in the middle. Like they do for pretty much every other vehicle. But for some reason, this one it's a big piece of plastic that goes in the landfill, which is kind of a shame. 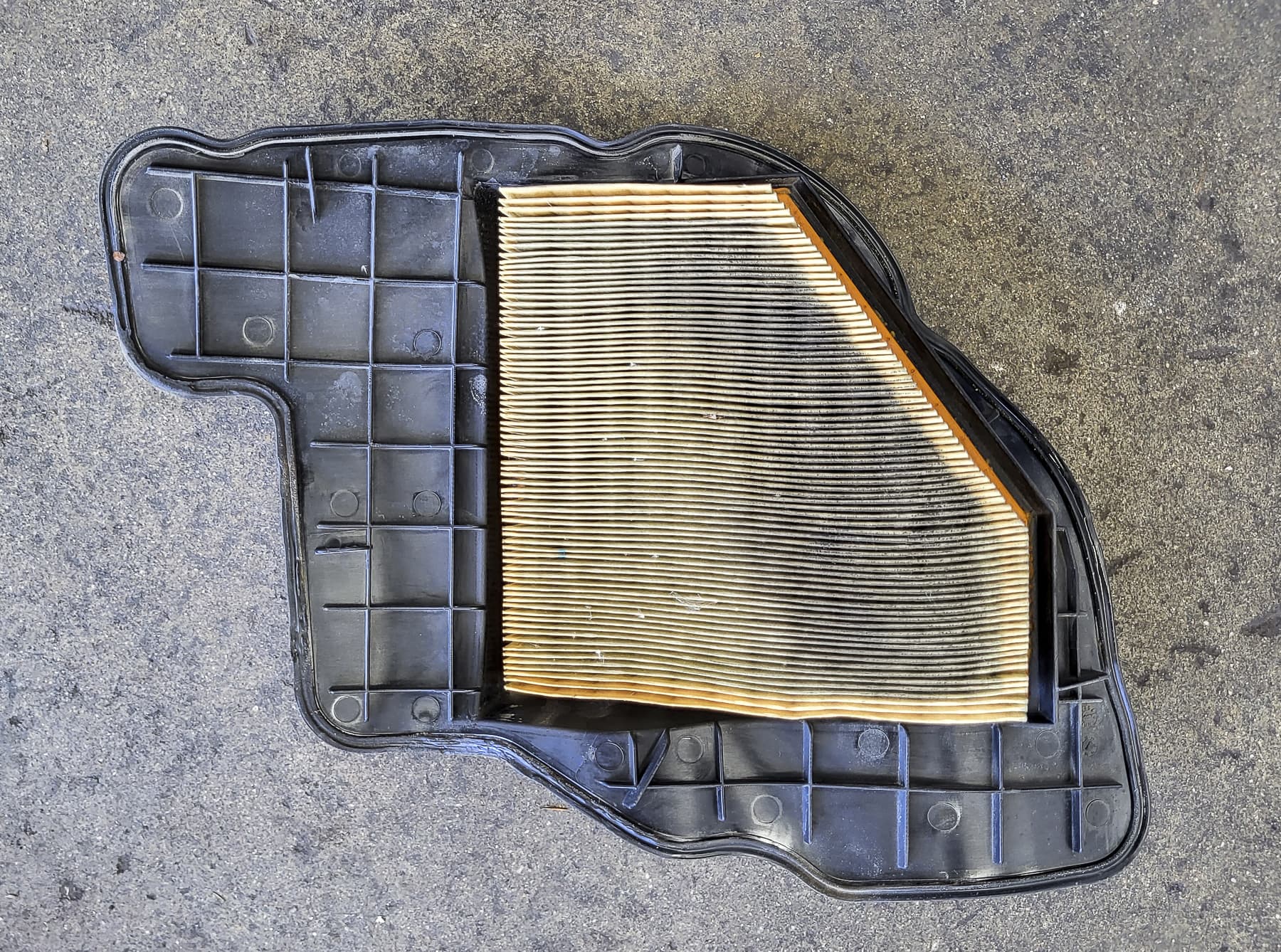 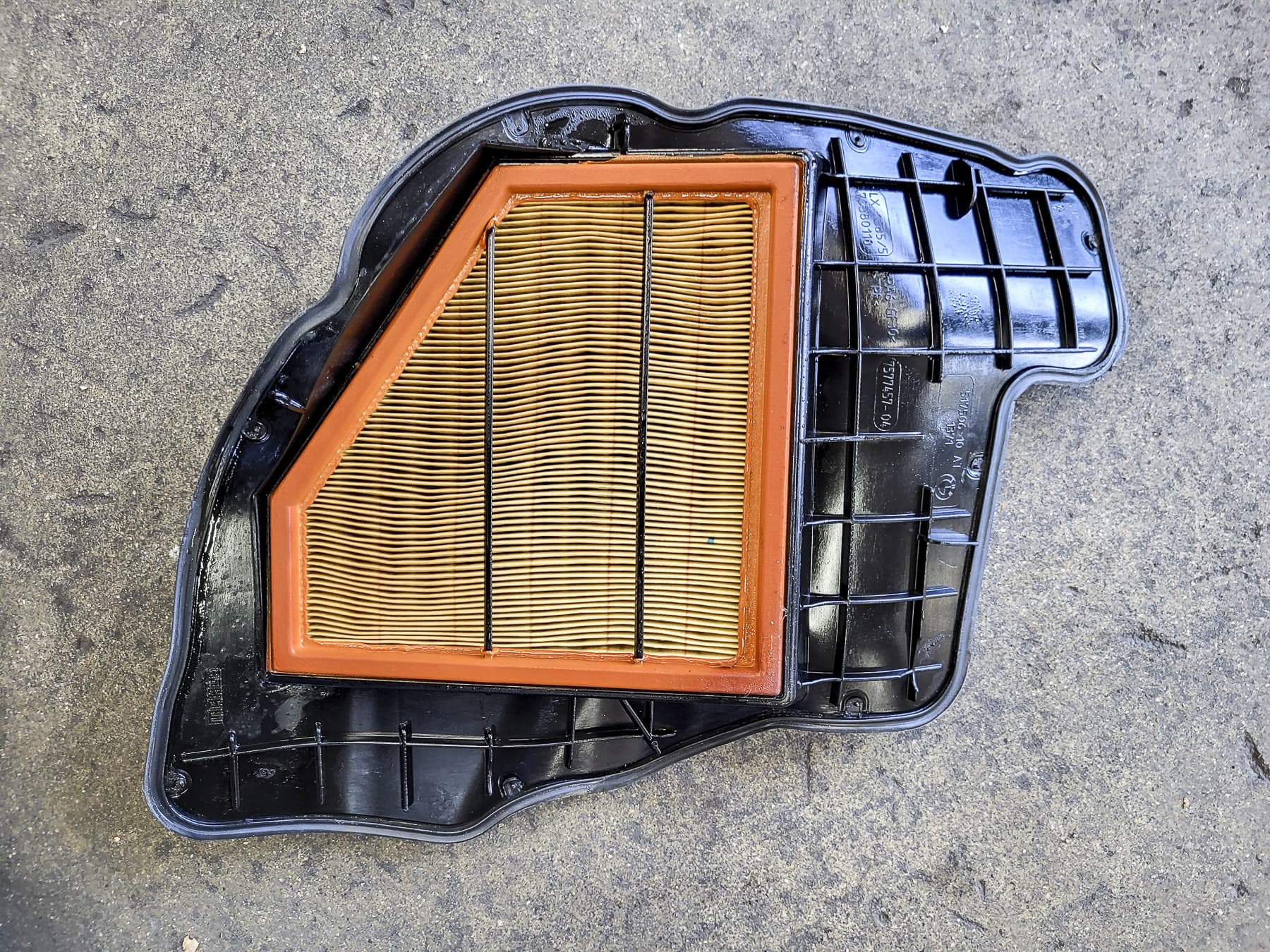 Bernie: It is. Yeah, the exhaust is running down the middle. There we go. That's a good view of it. So yes, this is a different design of engine. It's I'd say somewhat unique, but there's a few, I mean, the only other engine I know right off the top of my head that does this, is the Ford 6.7 litre diesel, which they introduced around 2010. And they put the turbocharges and the exhaust system in the middle of the V and the intakes on the outside. So yeah, definitely different idea.

Mark: So are the intakes actually on the outside or are they also on the inside?

Bernie: No, they're on the outside. So it's a cross flow cylinder head. So the intake, if you see my mouse pointer moving, would be located down here where the exhaust manifold traditionally would be located. And I think it makes a lot of sense with the complexity of turbocharge engines to put these components up here. Much more easily serviced. These are your intercoolers located on the front here. So the turbo chargers blow their air out through the intercooler and then into the exhaust manifold.

And I think in some ways it makes a simpler design. You have your oxygen sensors located up here. Again, if we look at a picture with the air cleaners off, you can see that the four oxygen sensors, the pre cat and post cat sensor. It does simplify things in a lot of respects.

Mark: Except for if you've gotta change the spark plugs.

Bernie: Except for changing the spark plugs. So diagnostically, this is a much more complicated vehicle to diagnose because you can't get at the parts that we would normally go, Okay, let's test those coils. And see which ones might be bad. You know, we're not really able to do that in an economical fashion. I mean, we could take everything apart and then put it back together and test it. We have probes where you can actually, you know, with a lab scope, you can actually hold it on top of the ignition coil and see if it's firing. Well, you can't really do that with this.

I mean, I guess you could, but it's kind of Mickey Mouse and difficult, by the time you do it, it's almost better to go, You know what, just put a set of coils and plugs in and see where it goes, which is, not the kind of diagnosis we like to do, but sometimes it's the only way to go.

Mark: Are there any other problems do you think that this design causes?

Bernie: Well, it sure gets hot. You know, heat's definitely an issue. And they've obviously put this very large cover over top, which is, you know, got insulative material. But our technician is working on the vehicle, he took it out for a drive and misfire developed after he fixed everything.

And sometimes the connectors on the ignition coils don't fit on as well as they could on a BMW. It seems like they're on, but they're not. He had one of them where the connection wasn't quite right. So he came back to the shop after road test to repair that. And it was hot he was like, whoa, that's hot. You could barely handle that nice twin turbo cover got really hot. So, you know, heat management is certainly an issue to deal with and dispersing all that heat from the turbocharger and the exhaust system is definitely an issue. But you can see even the shielding back here is heat resistant and hood insulation is obviously very important because it'll get pretty hot under the hood.

Mark: And the reason they do this, why, why would they build the engine this way?

Bernie: Probably some space saving. I mean, It's getting very complicated to stuff the turbochargers down the side of the engine. And so if you've got this nice big V section, you know, this big bank in the middle, why not put those in the middle instead of tucking them on the outside. And one other thing with exhaust that makes a difference for exhaust emissions is the closer you can put the catalytic converters to the heat source, which is, you know, basically right out of the engine, the faster they start working.

So that's another reason for doing this. You can get your catalyst operation almost immediately. If you remember cars from the seventies and eighties, the catalytic converter was located way under the vehicle, three or four feet down the exhaust system from the engine.

And so when you start the car, it would take a minute or two for the catalytic converter to light up. And now with modern engines, they light up within a minute or 30 seconds to a minute of a cold engine start. So it makes a huge difference for exhaust emissions.

Bernie: Less pollution. Well, you still get carbon dioxide, but you get less of the other nasty stuff, you know, that creates more immediate breathing problems.

Mark: And how'd the vehicle run after you completed everything?

Bernie: Well, they're pretty good. But you know, this is a fancy, luxury vehicle, so you can expect to have more things go wrong. That's kind of how I'll put it. Coils, that's a common failure item for most BMWs. I was reflecting and thinking, I have an X3 that's got 150,000 kilometres. I'm knocking on wood right now. Cause I've never changed the ignition coils, which is kind of surprising because usually they go bad far before. So I guess I've been lucky. But mine has oil leaks, which I've gotta get around to fixing sooner than later. There are a lot of issues with BMWs and you know, they're a nice car to drive. You'll just spend more money on repairs and maintenance than you will on a lesser quality vehicle.

Mark: So if you need your BMW serviced in Vancouver, the guys to see or repaired, the guys to see are Pawlik Automotive. You can reach them on their website to book. Pawlikautomotive.com. They'll call you back. They'll check out what's going on. They'll get ready for your appointment. Or you can call them and book at (604) 327-7112. They're always busy. So you have to call or book online. Have to. Pawlik Automotive in Vancouver. Thanks Bernie. Thanks for watching.

Bernie: Thanks Mark. And thank you for watching.