Mark: Hi, it's Mark from TLR. I'm here with Bernie Pawlik, Pawlik Automotive in Vancouver. Vancouver's best auto service experience. 24 time winners, 24 times as voted by their customers. Best auto repair in Vancouver, British Columbia, Canada. That's an impressive accomplishment. We're going to talk about a 2013 Mercedes-Benz ML350 that had a bit of a wiggly rear end. What was going on with this SUV?

Bernie: Well, it actually came to us, well I guess it may have had a wiggly rear-ended and to be honest I never drove the vehicle, but it did come in with a couple of fluid leaks and one of them was coming from the rear shock absorbers.

Mark: Okay, so why would the rear, what type of suspension is that, that the shocks would leak.

Bernie: Well, shock absorber has fluid inside. So all shock absorbers can leak fluid. Now, some Mercedes use a hydraulic suspension system where you could have potentially a humongous leak, but these do not use that. These Mercedes MLs, they use an air suspension system. So that adjust the height of the vehicle. Basically the springs are air and not metallic would be the easiest way to say it. So you can adjust the height of the vehicle. But the shock absorbers they're a special electronic shock absorber. So they have, you know, more fluid than usual, but basically that's what was happening. The fluid was leaking.

The shock absorption actually occurs from fluid, which dampens the balance of the spring. And it goes through a certain valves and that's how the shock absorber works. It is filled with fluid and eventually seals will leak and the shocks will leak. Same with struts as well. If they're, you know, a fluid filled strike, which most are.

Mark: Yeah, I guess it's like if you've ever seen, as more common for us older guys, but a vehicle gets going down the road and kind of bouncing along, trampolining along over every bump, it kind of goes the shock absorber just makes that happen and stop. Is that right?

Bernie: It does. Yeah. It allows the spring to do one up movement and bounce down instead of oscillating because springs will just keep oscillating. And if you've ever been in a car that has blown shocks, it's a horrible feeling to drive it. I can't imagine what it must've been like in the olden days before they had shocks, you know, or in a horse drawn carriage. It's that continuous balancing it'd be, I mean, it's better to have springs than no springs, but the bouncing feeling it's just sickening when a vehicle doesn't do that sort of one bounce and stop kind of thing. So shocks are amazingly important.

Mark: So what is an electronic shock absorber do that's different than a regular shock?

Bernie: Electronic shock absorber allows a different ride conditions. So you can have a sport ride. You can have a comfort ride. So the comfort ride allow the shock to be a little bouncier, whereas on sport ride will be much firmer. So when you hit a bump or you go hard around a corner, the car doesn't move so much. So that's kind of the difference. There's some trucks that have adjustable shocks where again, you can firm up the ride if you're going off road. You don't want the vehicle to bounce too much off road, so you can adjust that as well.

So adjustable shocks. They work at a couple of different ways and some of them they'll just have a valve, it'll change size and allow the fluid to flow at a different rate. But electronic shocks are interesting. These type, because a lot of them, and I'm not sure on Mercedes, whether they have them, some of them have a magnetic type of fluid and by changing, by sending electrical pulse into the shock, it'll change the alignment of basically the fluid. And so it'll flow slower through a valve. It's kind of interesting. So interesting technology.

It seems to me, this is my experience, it seems to me like those kinds of fluid shocks tend to leak more easily than others. And it's probably because, again, I'm just guessing not an expert, but just guessing, that it's probably due to the fluid may be a little grittier and harder on the seals. That's my guess.

Mark: How does this part of the suspension system fail and leak?

Bernie: Basically as I mentioned, I mean the leakage, you know, it just happens over time. 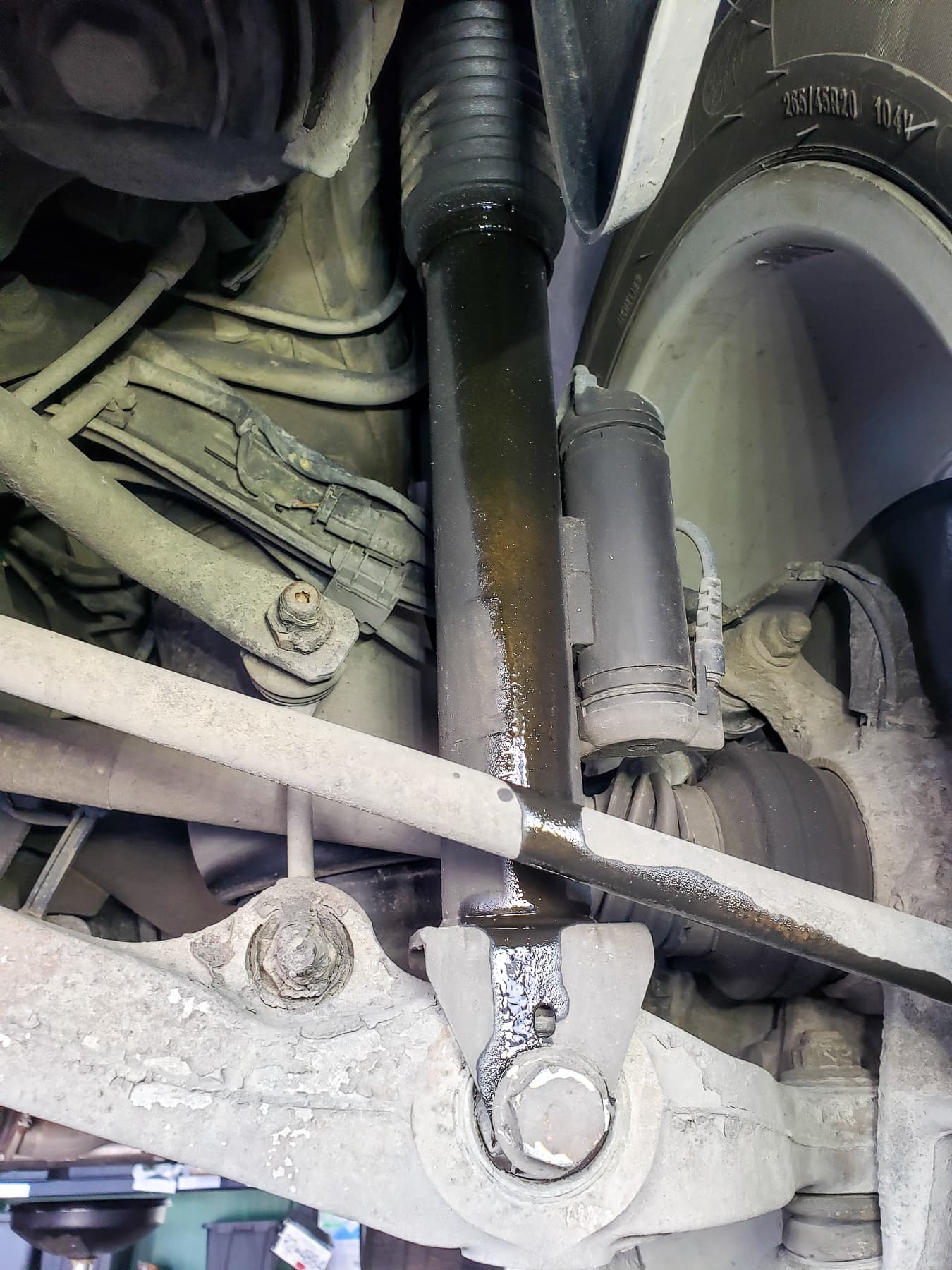 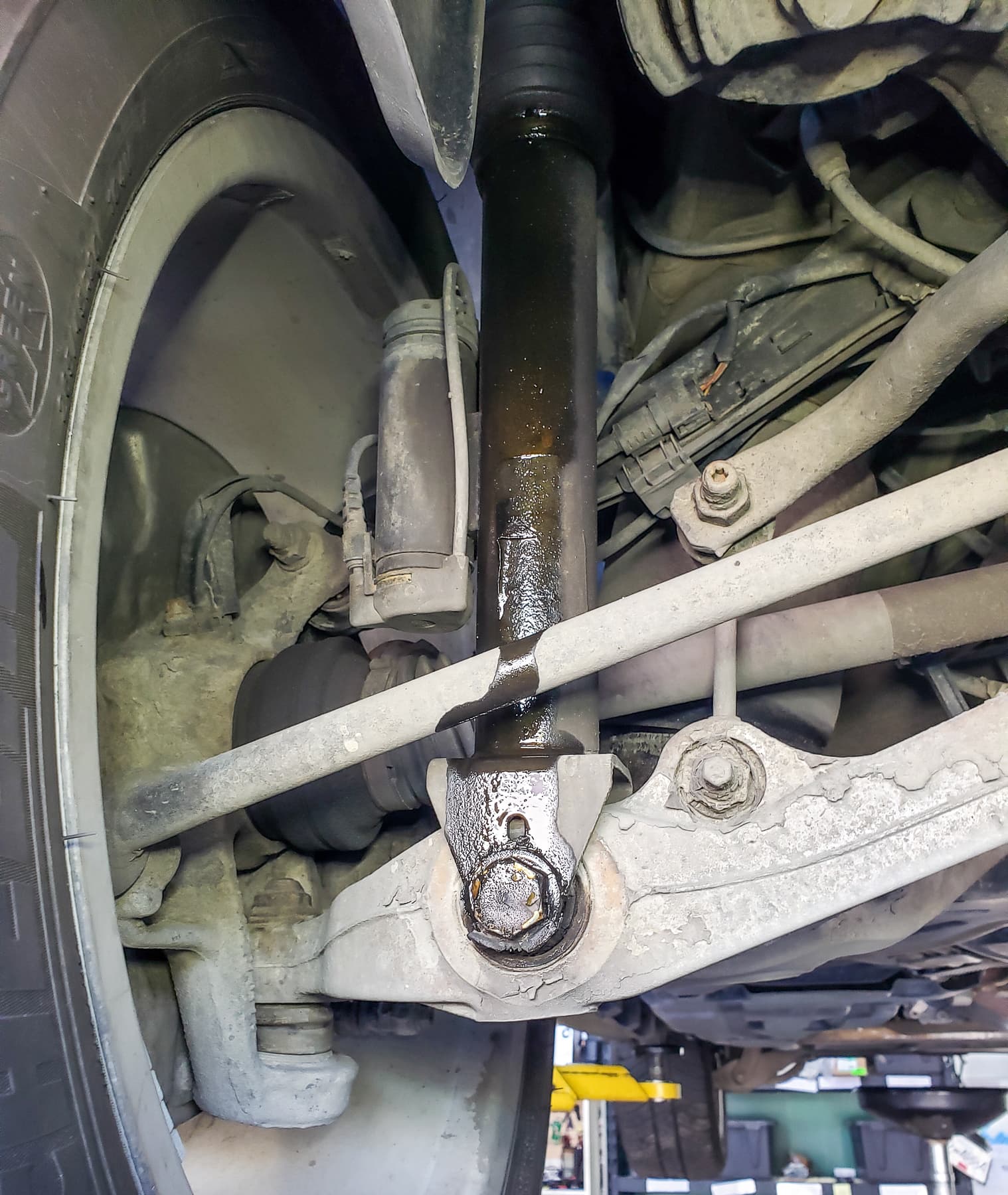 Here's a view of the shock absorber, this is the right rear shock. I mean, you can see a stream of fluid coming down there. This is like kind of a dust cover bellows here. But inside up above there, there's a seal that seals the fluid out and so that leaks. This is the electronic chamber in the shock absorber. Again, I'm not certain if this actually has that magnetic type of fluid or whether this electronic part here just changes the valving inside the shock absorber. I don't know for certain, but in nonetheless it leaks.

Here's the left rear. I mean, both were leaking a lot of times we find these vehicles where only one shock leaks, but in this case it was a double whammy, both were leaking. And when we put the vehicle up in the air,  after a few minutes, there's quite a drip on the ground. So they've been leaking for a little while. There's are 2013 ML350 parked in front of our shop.

Mark: So since they're fancy electronic shocks, are they expensive to repair?

Bernie: Yeah, they are. Yeah. They're not cheap. It's an expensive job. Any suspension beyond just regular shock absorbers, you know, it can get pretty expensive and pricey to fix. So I'd say they're cheaper than the repairs in a hydraulic suspension in an SL500, but they're certainly    pretty pricey.

Bernie: Yeah, it's actually quite common. We've done them on quite a few of these cars. So I think if you, if you keep this vehicle for, you know, it was 2013, that's what seven, eight years, eight years, eight years old. I mean, if you know that they seem to fail, you know, a lot of them by 10 years old. So unfortunately hate to break the news to you if you own one of these, but you'll probably have to repair them at some point. It's just kind of part of the game.

Mark: And how are, especially in these generations, how are they for reliability?

Bernie: They're pretty good. This is a diesel, you know, we've talked a lot about the diesel issues. Yeah.  Yes. Yeah, no, I mean, they're good. I mean, there's a lot of things that do happen with the diesels. And you'll find all sorts of information on other podcasts, but you know, the suspensions do have issues on these vehicles.

We do a lot of repairs on the air suspension, the compressors and often the valve block that diverts the air to the different air struts will fail. So that's the common issue on those. I mean, eventually the air struts themselves will fail. We don't see too many of those yet, but you know, it's a good vehicle, but stuff goes wrong and happens and that's par for the course. So just be prepared.

Mark: If you're looking to have your Mercedes last a little bit longer and be good and safe and comfortable to drive the guys to see are Pawlik Automotive in Vancouver, British Columbia, Canada. You can reach them at (604) 327-7112 to call and book an appointment. Talk about it with them, or you can book online. They'll get back to you. Pawlikautomotive.com. Of course, there's our YouTube channel. Pawlik Auto Repair. We've got hundreds and hundreds and hundreds of videos on there. We've been doing this for nine years, approaching a thousand, all makes and models, types of repairs. Thanks so much for watching and listening. We really appreciate it. Thanks Bernie.