Mark: So this week's victim is a 2013 Subaru Outback. What was going on with this vehicle?

Bernie: So the owner had a noise coming from the engine and he kind of figured, Hey, maybe it's not a big deal. I had a quick listen to it, it's actually a friend of mine. Said, Hey, actually, no, that is something to be concerned about. It was like a whining kind of growling noise coming from the engine when you rev it up. So that's what was happening with the vehicle.

Mark: So how do you sneak up on engine noises in your shop?

Bernie: How do we sneak up on them, well very, very quietly and carefully. So I mean, the first thing to do of course, is to listen to the noise and see where it's coming from, what we suspect might be an issue. I kind of figured it might be a bearing in the drive belt pulley system.

So the main tool that we use for a lot of engine diagnostics is a stethoscope. But it doesn't look like your doctor's stethoscope. I should probably should've brought a sample, but basically the thing goes in your ear like a stethoscope, and it's got a hose on it, but instead of being a flat piece like they put up to your chest. This one has a long cylinder with a very sharp pointed tip, and we can put it on individual components on the engine and try to determine where the noise is coming from. So that's the main tool we use.

The other thing that's neat about the automotive stethoscope is you can pull off this sort of tip piece, and you can just use it as a listening device. So it just picks up sound. So you can kind of move around to certain areas of the engine, and go that's where the noise is coming from. Because sometimes the noises are mechanical sounds and sometimes they're more, I want to say audible. It's like, they're kind of in the air, so to speak. I'm having a hard time describing it. We use the tool in different ways.

So anyways, for something like this, of course, the metal tip is the best way to find it. We pretty quickly determined that the idler pulleys for the belt, as we suspected, were worn out and that's what needed to be replaced.

Mark: So that's what you found with this Subaru. Do you have some pictures?.

Bernie: Yeah, I do. Actually, I even have a video, which is really cool. So let's get into the pictures. So there's our 2013 Outback. Actually I'll get into the video right now, cause this is a really good example of what a noisy bearing sounds like. Can you see that okay. We should hear nothing. And usually a new bearing, it doesn't spin quite so fast and easy. 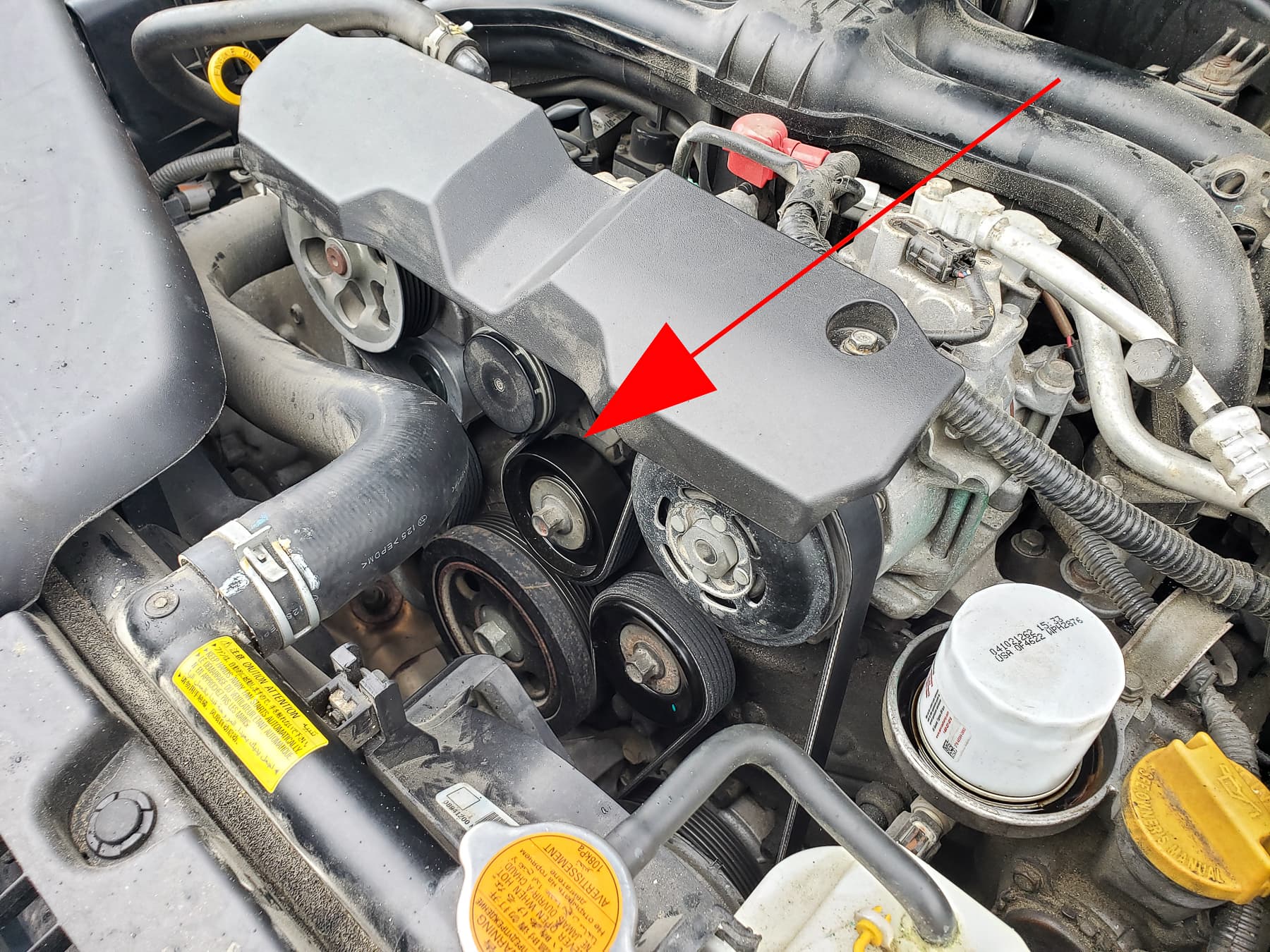 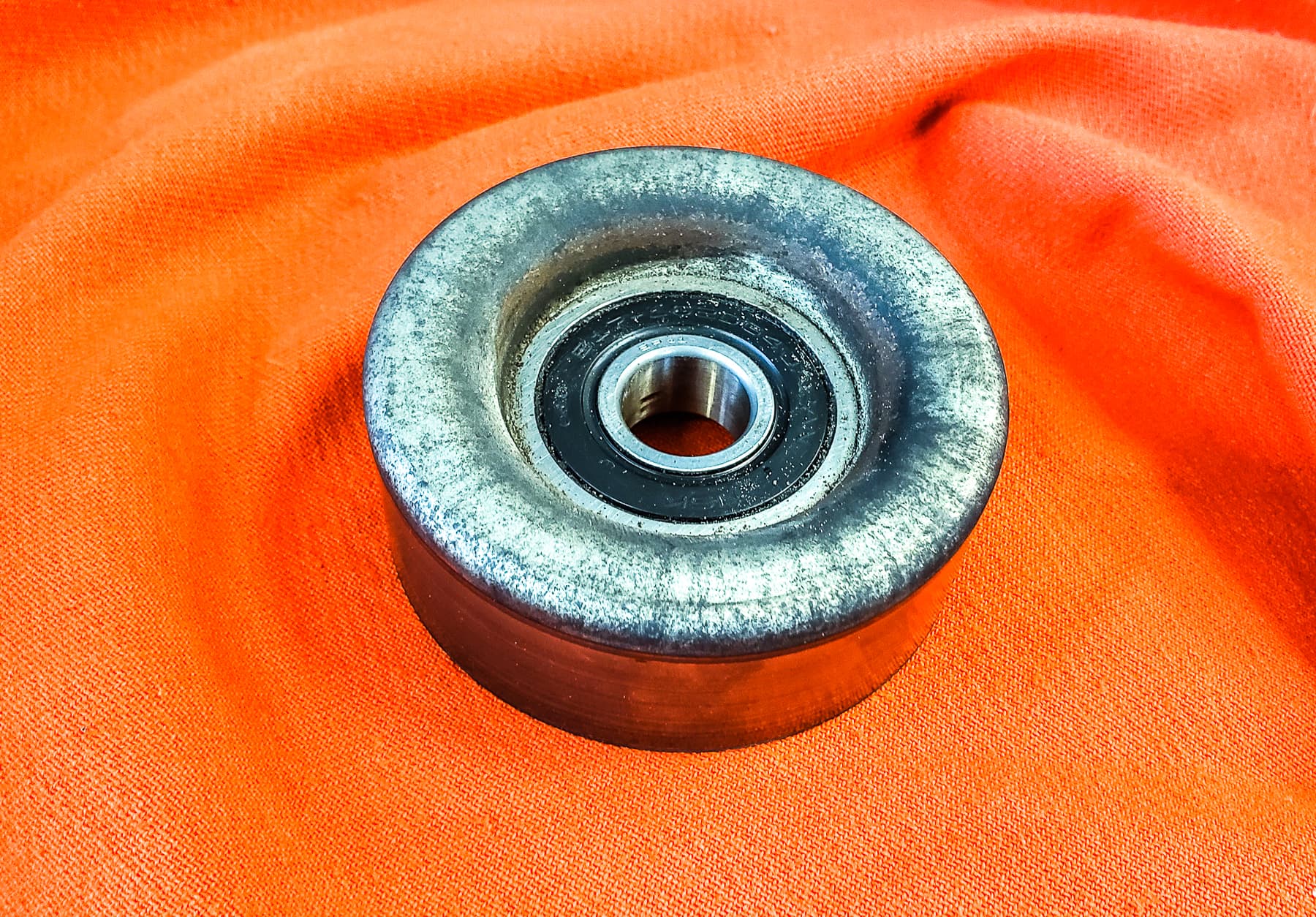 There's a view of the drive belt system. So this is the crankshaft pulley down here. This is what drives everything. If you took the belt off, this is what would be spinning when the engines running. There's an idler pulley here, there, and there's a tensioner pulley here and there's a spring loaded tensioner assembly. Air conditioning compressor, power steering pump. And there's an alternator somewhere. I can't quite see it probably down, probably down here.

Bernie: Yeah, it seems like a, not a usual spot. No, actually this is the alternator up here. The tensioners back in here. So anyways, or the tensioners down here anyways.

Mark: It's like you've never worked on one of these.

Bernie: Its's like I never worked on one of these. Yeah.I sound like a complete fool. But anyways so you can tell it wasn't me who actually did the service on it, but yeah, that actually the tensioner should be down here. So anyways these are the pulleys we replaced.

We also did the belt at the same time. You know, serpentine belts, which is the design of this belt. They're very durable these days. They last a long time. It used to be that they would develop cracks after a while. They use a different kind of rubber compound so they don't crack, like they used to. But they still do wear out. Like the grooves will wear and over time, you know, they won't contact the pulleys quite as well as they should.

So anyways, it's a good idea when one thing's worn out, just do them all at the same time. And then it's done forgotten about, you know, in the life of this car. You'll probably never have to do this service again.

Mark: So what would have happened if the owner had not fixed this issue?

But I mean, you'd notice a loss of power steering immediately. So that would be kind of the first thing. But there'd probably be some horrible screeching sounds along with it. Definitely not good.

Mark: So how often do these pulley bearings wear out on Subarus or any car?

Bernie: Well, they usually last a fair amount of time. I can't remember what the mileage is on this vehicle, but it's a 2013. So the car's about 8, maybe 9 years old at this point. So, you know, that's kind of an average life span for these kinds of things. Maybe, you know, 7 to 10 years on any car. It's not just a Subaru issue. It's pretty well any car that has a drive belt system and they all do. Sometimes you get more out of them, but that's kind of an average lifespan, I'd say 7 to 10 years.

Mark: And how are 2013 Subaru Outback for reliability?

Bernie: Yeah, they're an excellent car. I mean, very few problems with these things. There are some engine oil burning issues with some of these vehicles. And I know the owner of this vehicle, he has no problem with that. So you know, that problem isn't happening on this vehicle. But there are some that do have them. And I think it's kind of random, but it is fairly common. That was not an issue with the earlier generation of these engines. So the newer ones do have that problem from time to time.

So you have to be a little cautious if you're buying a used one, but unfortunately it's the kind of thing where it's really impossible to test for that kind of thing. But if you didn't have seen, see any blue smoke, well you'd know that was bad, but they don't necessarily blow blue smoke. They just consume oil. So that's really the only issue with these cars. Other than that, they're fantastically reliable.

Mark: So if you're looking for some service on your Subaru in Vancouver, the guys to see are Pawlik Automotive. They do a lot of Subarus. You can call them and book an appointment, 604-327-7112. Or check out and book online at pawlikautomotive.com.

There's hundreds of videos on there for your nighttime pleasure as well. Good ones about cars and car repairs. As well, we have our YouTube channel, Pawlik Auto Repair, close to a thousand videos on there. We've been doing this for 10 years. We appreciate so much you watching and listening. Thank you, and thank you, Bernie.