Mark: So, Audio S6, this is a pretty hot little number;  you had to do some maintenance?

Bernie: Yes, it had about 25,000 kilometers and was due for a maintenance service. Basically the service that was required at this point in time was an oil change, oil and filter, the air filter was dirty and we replaced that, wiper blades were smudgy, those were replaced and a full vehicle inspection and we didn’t really find a lot of issues with the car, low mileage, 25,000 kilometers is still pretty low so the brakes were good, everything else was in good shape.

Mark: So what does the Factory Maintenance Schedule say to do for this Audi?

Bernie: So, it’s oil changes is every 15,000 kilometers or once a year, every 12 months which I think is great. There are a lot of European cars, BMW specifically, they have 24,000 kilometers oil change intervals which and actually Porsches are like that too. I think it’s ridiculous, I mean that’s a really long time to go with engine oil.It could probably be OK if you did nothing but straight highway driving and you put that kind of mileage on in a year, but anything else you really have got to change it more often and Audi at 15,000 kilometers with 8 ½ litres of oil: that’s a really good oil change interval. The oil’s going to get dirty but not excessively at that point; so that’s a good time. It is an expensive oil change in these cars just like it is on a BMW or a Porsche but, you know, it’s worth the money to spend a little extra to keep the intervals done at a more timely fashion.

So that’s the annual service, it’s an oil change and the basic inspection, then the every 2 years’ service is, includes the inspection we just did so it’s a full comprehensive inspection, also replace cabin air filters and brake fluid flush are recommended every 2 years on this car, other than that there’s not much else, I did look at the maintenance schedule further ahead, spark plugs are up at about 90,000 kilometers so you have a long ways to go before you replace those.

Mark: So this is a fairly high performance car, what kind of features does it have?

Bernie: Well, it’s pretty amazing, it’s a twin turbo V8 engine and it goes like stink, it’s just awesome. The interior features: I could go on for a long time, amazing upholstered seats and climate control and navigation system and all that stuff but I thought I would just share a couple pictures because every once in a while I come across a car and it’s just got an absolutely gorgeous looking engine. Almost all cars now a days have plastic covers over top of their engine but even this plastic cover is a beautiful work of art. So many of them are just plain covers but this looks beautiful just without taking it off; but underneath is where it’s really cool and this is what’s underneath that cover which is almost scary. There’s a lot of stuff under this cover and we’re not even really looking at the engine at this point, those nice shiny gold pieces are the two turbochargers so you’ve got your air inlets and exhaust system. Underneath is the engine; it’s a kind of car where you really don’t want to be getting into doing any service at all on this thing, you want to make sure it stays in good shape for a long, long time because it will be expensive, there’s a lot in there to take care of. 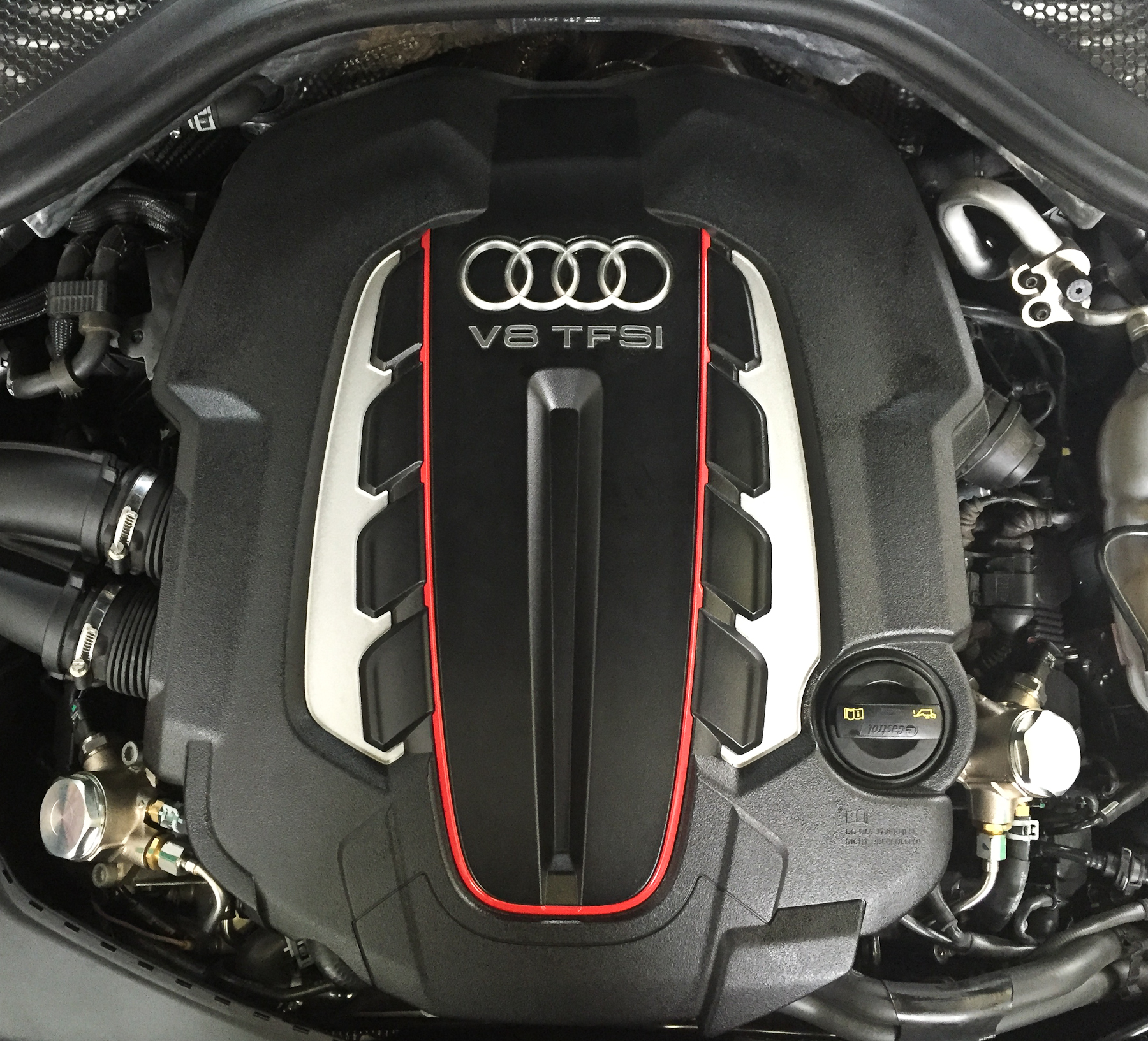 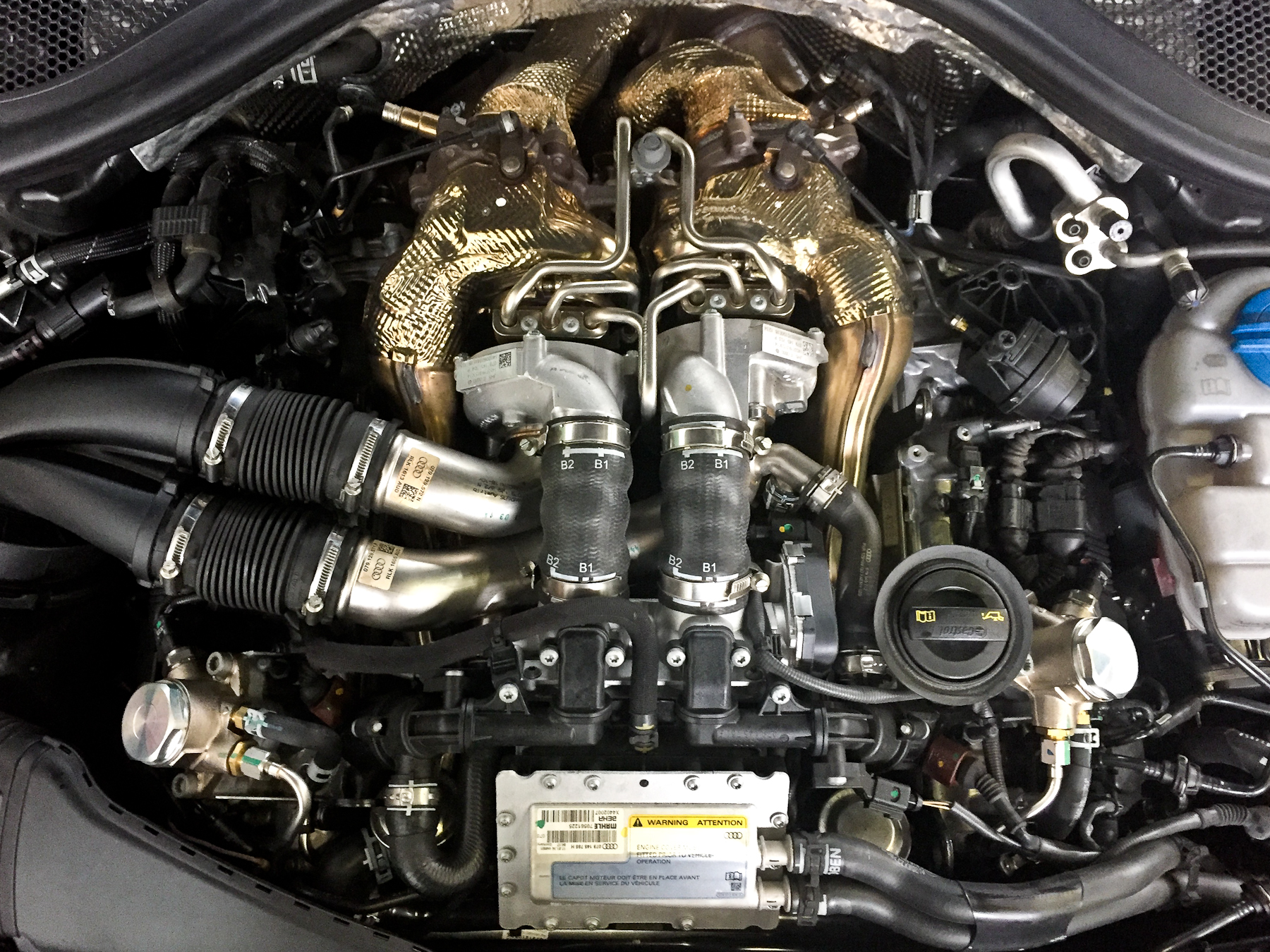 Audi S6 engine exposed. There is a lot of complexity to this engine.

It’s also got the direct fuel injection which makes this car so powerful and responsive, it’s an awesome feature, Volkswagen uses this on a lot of their engines and in a lot of cars nowadays: it’s like the diesel fuel injection where the fuel is injected directly into the cylinders and not into the intake manifold like traditional fuel injection. This actually brings me to another maintenance item which is not on the manufacturer's list but is something that should be done probably every two to three years and that is doing a fuel system cleaning to remove carbon deposits from the engine. That’s something we can do and we can talk further about that in another hangout but that’s a service that like the Motorvac Fuel Injection Cleaning we used to do but that service is really not relevant on an engine like this because of the way the fuel injection system is differently designed. We’ll do a hangout on that in the future and talk about that.

Mark: Any further thoughts on the S6?

Bernie: No, it’s just a nice car, if you’ve some money to buy a nice car to bomb around in, all-wheel drive, go fast and very comfortable too, it’s a great car.

Mark: Great, so if you need some service on your Audi, these are the guys to go see are Pawlik Automotive. You can reach them at 604-327-7112 to book your appointment. They have a lot of bays now they’ve expanded and a lot of great techs doing a lot of great work or you can check out their website pawlikautomotive.com. There are many years of amazing information. Bernie gets calls from all over the world, sometimes that’s not good but it is an example of a worldwide authority on auto repair and so if you want somebody like that working on your car these are the guys to go see. Thanks Bernie.

For more about the Audi S6 click on this link https://en.wikipedia.org/wiki/Audi_S6