Mark: Hi, it's Mark from Top Local. We're here with Bernie Pawlik, Pawlik Automotive in Vancouver: Vancouver's best auto service experience. 22 time winners of Best Auto Repair in Vancouver, as voted by their customers. And we're talking cars. How are you doing Bernie?

Mark: So today's victim 2014, BMW, 435i. This is a series that we haven't seen for that long in North America. What was going on with this fairly new vehicle?

Bernie: Yeah, so this vehicle came to our shop with a very rough running, engine would barely run, a number warning lights on, and definitely needed some help.

Mark: Where did you start to test?

Bernie: Well, of course, scan tools, the first place to start, see what trouble  codes are stored. And then from there we did some tests. We pretty much determined that number one cylinder was the culprit. There was a number of misfire codes for that cylinder, and further testing we found that the fuel injector and number one cylinder was a kind of spraying like a fire hose. It was, as soon as you turn the key on, it would actually inject fuel. It's electronically controlled, whatever controls that hold the injector shut were basically not functioning.

So it was just dumping a lot of fuel into the engine, and we figured need replacement. The number one fuel injector was the culprit.

Mark: So what kind of injection system is this?

This is pretty common. I mean, BMW has been using this for awhile, at least since probably 2010, 2011. A lot of other manufacturers use it. It works really well. Of course creates some of its own unique issues, but, yeah.

Mark: So this is a system that originated in diesels, if I've got that right. Why would they move to this kind of a system?

Bernie: Yeah, you're exactly right. Direct injection is used in diesels. You know, diesels don't have spark plugs. So the only way that the fuel can be fired is to compress the air to a very high temperature, and then the fuel is injected and explodes. That's basically how diesel works.

With gasoline, of course, for many years, they didn't do that. Take carburetors, for instance, fuel just got sucked into the cylinder, got compressed with the air. There's a bit of heat developed and then the spark plug fires and boom, the cylinder goes down.

So now with direct injection, they found there's a lot of benefit to it. There's way more precise fuel control, so the fuel can be injected exactly at the right time. It can be injected multiple times, like in a modern diesel.

That's the reason why modern diesels are so quiet, they don't knock and rattle like the old traditional diesels is because fuel is injected at exactly the right time, and it can be injected multiple times. Some diesels actually will inject, I believe, seven times during a combustion event. It'll start injecting on the way up and on the way down and, you know, as the pistons moving up and down.

So, with gasoline, to be honest, I don't know if gasoline does the same type of thing, but there's no reason why they wouldn't do that. With the direct injection, they certainly have the capability and control to do that.

And the benefit is better performance and certainly much better fuel economy.

Mark: You mentioned there's some unique problems. What would those entail with using direct injection?

Bernie: A lot of the unique problems actually are our combustion deposits, carbon deposits that develop on the intake valves. These have been a problem in cars for a long time, even on port injection systems.

Mark: How do you prevent that from happening?

Bernie: First thing is always use a good gasoline. There's gasoline called top tier and a lot of  major like Chevron, Esso, a lot of those gasolines are all top tier. Just look around wherever you buy gas, just make sure it has a top tier rating. That has the best additive packages. You don't have to use premium if the car doesn't require it, just use whatever, if it's a top tier fuel, that tends to work really well. That will prevent deposits. We do have a combustion cleaning service and we recommend doing probably about every 30 to 50,000 kilometres.

It's basically a chemical spray that sprays into the injection system and that softens up the deposits and removes them. And if you do that on a regular basis, you're not going to develop that problem, but if you don't do it and you leave it for a long period of time, sometimes you actually have to remove the cylinder head from the vehicle. There's also techniques called Walnut blasting where you can actually take the intake manifold off, seal the cylinders up, and basically blast the carbon deposits off with walnut shells. If any of that Walnut debris gets in the engine, it'll just burn off, which is a safe thing to do. But that, as you can tell by removing the intake manifold, it's quite a procedure. So you really don't ever want to go there.

Let's look at some pictures. 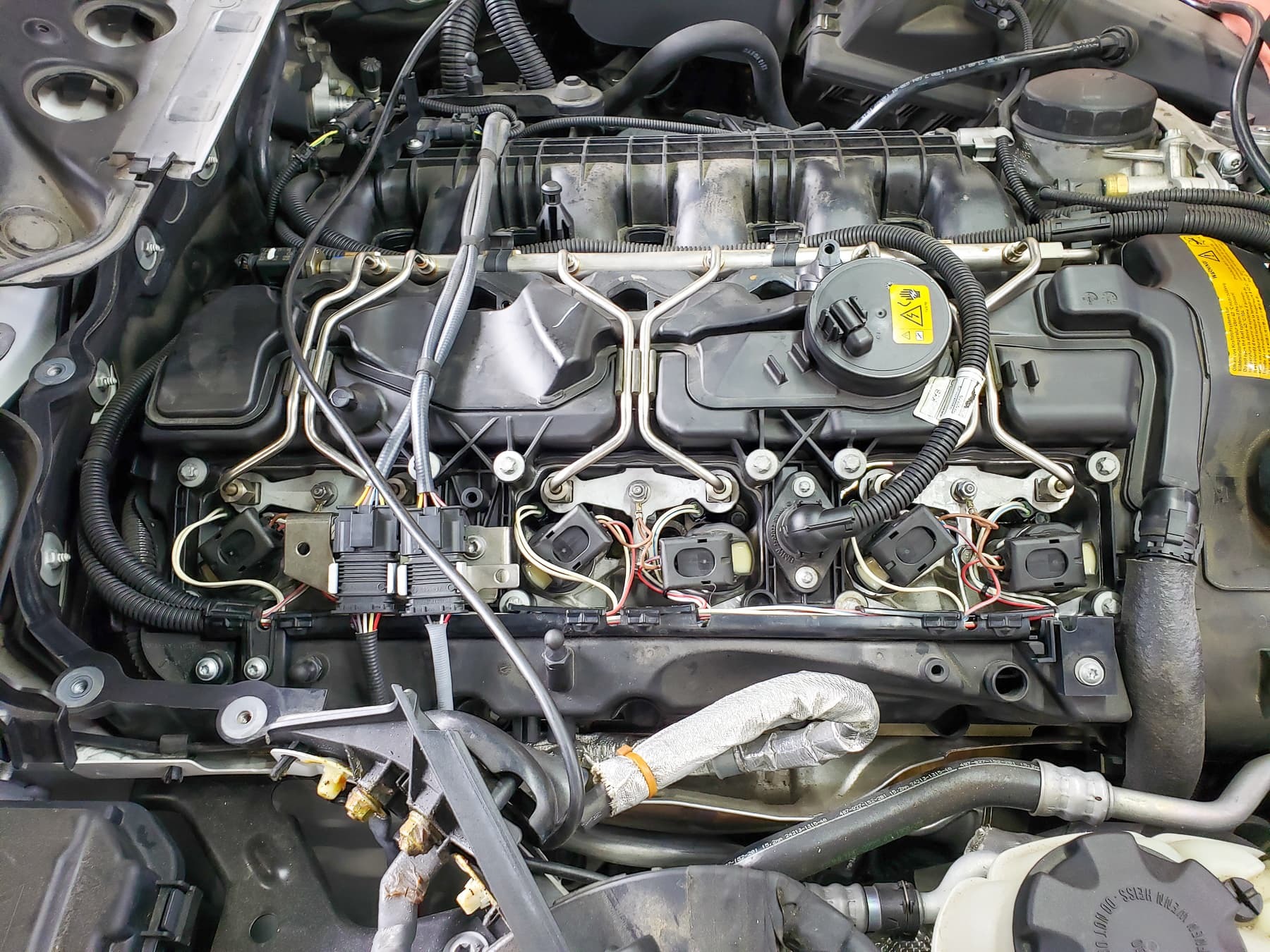 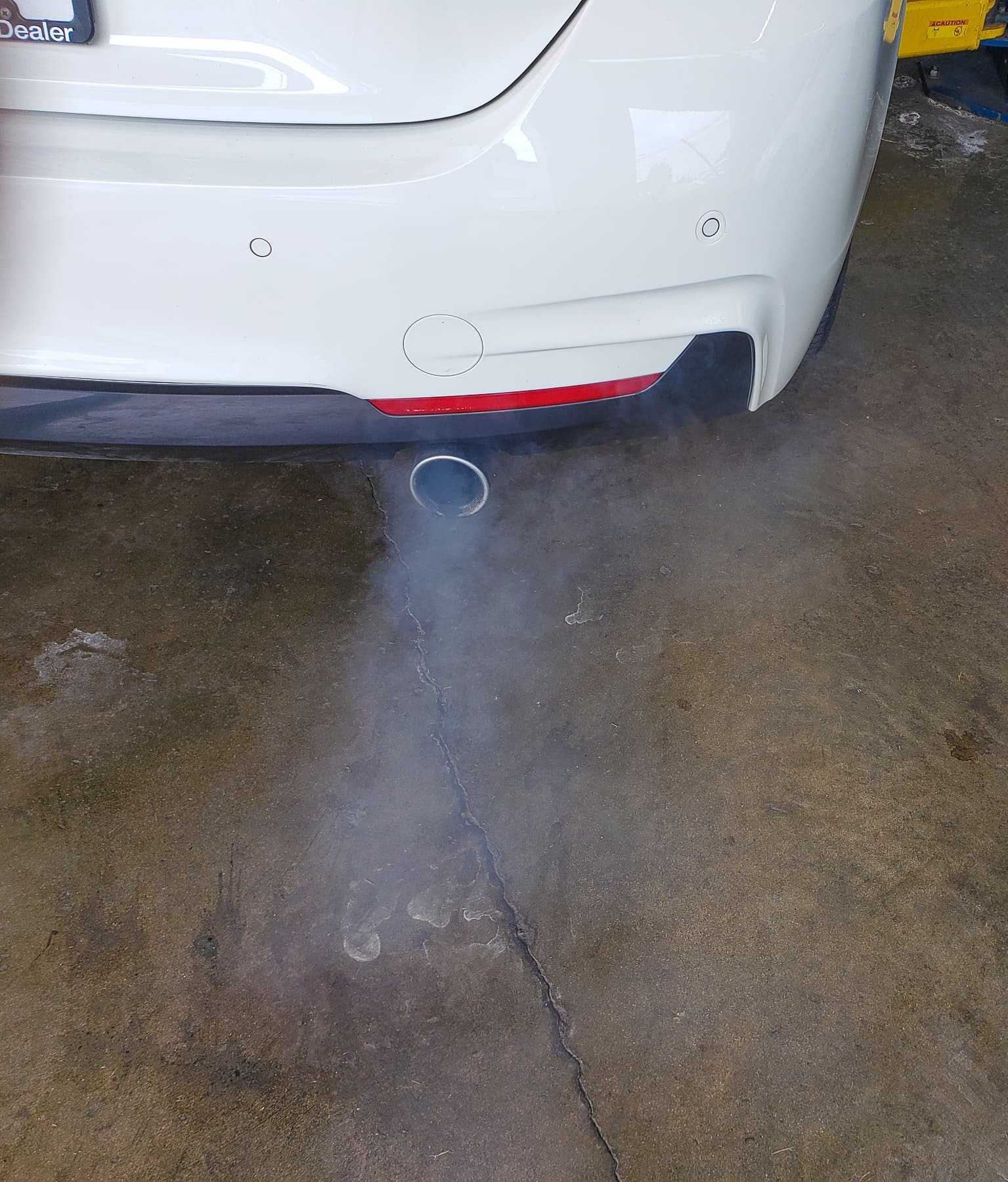 So there's our 2014, 435i BMW, beautiful looking car. I like the four series. It's kind of like a three series, but they tend to be just a little sleeker for some reason, so it's good looking.

This is a direct fuel injector in the BMW.  This is the pintle that sits right in the cylinder here. So it's exposed a lot of heat in very high heat, very high combustion pressures. There's a seal on the end here that prevents combustion pressure from leaking out. The fuel line hooks up here.

There's an electrical connector up here. All the magic kind of happens in this area of the injector here. I mean, it's amazing how, we're talking like literally microseconds of opening times and sprays. It's a pretty amazing device.

And there's a top view of the engine. So these are different cylinders. There's number one, number six.. It looks rather like a diesel when you look at it, it's basically got a high pressure, common rail. There's the electrical connector here for the injectors and the injectors kind of buried down here.

We're looking at the ignition coils right here. So there's six of them. It's a six cylinder engine below that way down there as a spark plug. So. It's sometimes funny when you look at these, you know,  you can actually see the engine, it's hard to know what's actually engine and what's actually a fuel and ignition system.

There's so much that kind of gets  added on top, let's say. Timing changes. So, you know, it's over here, the engine oil filter air intake, just to kind of orient you to the engine compartment and that's the front of the vehicle there. Oh, and by the way, there's a big covers that go over top of here.

So in order to get it, that's an access that there's a very large cover. That pretty much goes right over to this area here. So when you look under the hood, it almost looks like a four cylinder.

Mark: So, is there anything that can be done to prevent fuel injectors failing on one of these new BMWs?

Bernie: No, they'll just fail at their own time. And they are problematic. This engine was kind of unique though. I mean, this is the  first one that we've run into this had developed this problem, but we've had others where they have misfires or they just don't quite run properly and the injectors tend to fail.

Strangely enough, this vehicle only has 50,000 kilometres. So it's very low usage, which is kind of surprising. You think it would last a little longer. I've got a 2011 X3 with over a hundred and it's still - knock on wood - the injectors are still working well, and hopefully they will. They tend to fail at a variety of ages, this seems a bit on the young side.

Mark: Did you have to replace all the injectors or just the number one cylinder?

Bernie: In this case, we only replaced number one and I strongly suggested to the owner, "let's do all six." Because if one fails, chances are the other ones are gonna fail.

You know, you never know. I mean, tomorrow or six months, you never know when the next one's going to fail. So the recommendation is to replace all the injectors and it kind of gives the engine a fresh start. But in this case we just replaced the one, that's what he wanted to do.

And that's what we did. We had recommended doing the spark plugs as well, but he just kind of opted to do the fuel injector, 'cause we knew that was the bad thing.

So these are some of the things that can happen after catastrophic injector failure like this, the exhaust's a little smokey. "Oh, did we do something?" And something happened. It's just, just a matter of time for things to burn out of the system when you ended up getting too much fuel like that.

Mark: After that burned out that stuff, how did it run after all the repairs?

Bernie: The car ran great. A lot of power, ran really well, so we delivered it to the customer.  We got a phone call the next morning, the car is running like crap - check engine lights on, barely runs, and go, "Uh oh". I brought it back in and number six's injector had failed for exactly the same thing.

I find it kind of ironic because it literally, when it left the shop, it was beautiful. So this is why we recommend, you know, when we say change all six, there's a good reason to do it. So after going through a very long ordeal, again, rediagnosed it. We also changed the oil because the oil had got pretty contaminated by now with two fuel injectors leaking too much gasoline, the oil was starting to get contaminated.

So we changed the oil, change number six injector and all the spark plugs and the misfire count was very minimal. We changed number six injector, car's been gone a week, haven't heard back. So I think it's all good, but you know, this is the exact reason why, you know, sometimes they say, you never know, it could fail tomorrow, it could fail in a year.

And this is one of those cases where it failed tomorrow. And by the way, it actually, even though it costs you more money to do the job. All six first time, it's more money, but it's actually cheaper per injector to replace it like that, cause every time you go in, there's extra labor to remove all the other fuel rails and bits and pieces.

So there's the story, but now it's running well... so far, but there's four more injectors that could fail any day.

Mark: If you're looking for a service for your BMW, any fuel injection problems, the experts to see in Vancouver Pawlik automotive. You can reach them at (604) 327-7112 to book your appointment, you have to call and book ahead. They're busy, always busy. Check out the website, PawlikAutomotive.com. Hundreds of videos and articles on there, all makes and models of cars, all kinds of repairs over the last seven years. YouTube channel Pawlik Auto Repair, same thing, hundreds of videos on there. Check it out. If you've got nothing to put you to sleep, we can do the job.  And thanks for listening. We appreciate it, leave us a review. Thanks Bernie.

Bernie: Thanks Mark. Thanks for watching and listening.