Bernie: Yeah. So this vehicle came to our shop with an oil leak well, some smoking from under the hood and smoking and a weird smell which we determined to be the valve cover gasket leaking onto the exhaust manifold.

Mark: So what's involved in repairing that?

Bernie: Well, there's a couple of ways to repair it. I mean, at the very least replacing the gasket, but in this case, we chose to replace the complete valve cover. It's a plastic cover. Comes with a gasket, all the bolts, the whole assembly. And we basically figured that was a better way to repair this as a permanent solution, as opposed to just doing a gasket and risking that perhaps the cover may be warped and leak at a future date, prematurely.

Mark: So is that something you've run into before? Like what that seems like a waste of a good part.

Bernie: We have run into it before. Sometimes with plastic valve covers, now we actually did a podcast recently on Audis with plastic valve covers, but they're very short little V engines. And a lot of these longer valve covers, which this is a straight six engine, it's a very long valve cover. They tend to warp a little more easily. So we just figured that it was a better idea just to replace the whole unit than risk, you know, doing just the gasket. So there's a few parts, it's an extra item, but it kind of makes more sense to do the repair right the first time.

Mark: Are there any other wear out items in the valve cover?

So the crankcase breather system is part of the valve cover but we'll talk about that in a sec. So here's our nice 435, 2014, I think this is the second model year, they came out with these. They came out in 2013 originally.

So there's our new valve cover. If you want to know what this weird background, this is a plastic bag the valve cover came in. I took the picture on the shop floor, didn't want to get any dirt in the new valve cover. You can see this valve cover has new bolts and the other thing you mentioned, was there any other items. 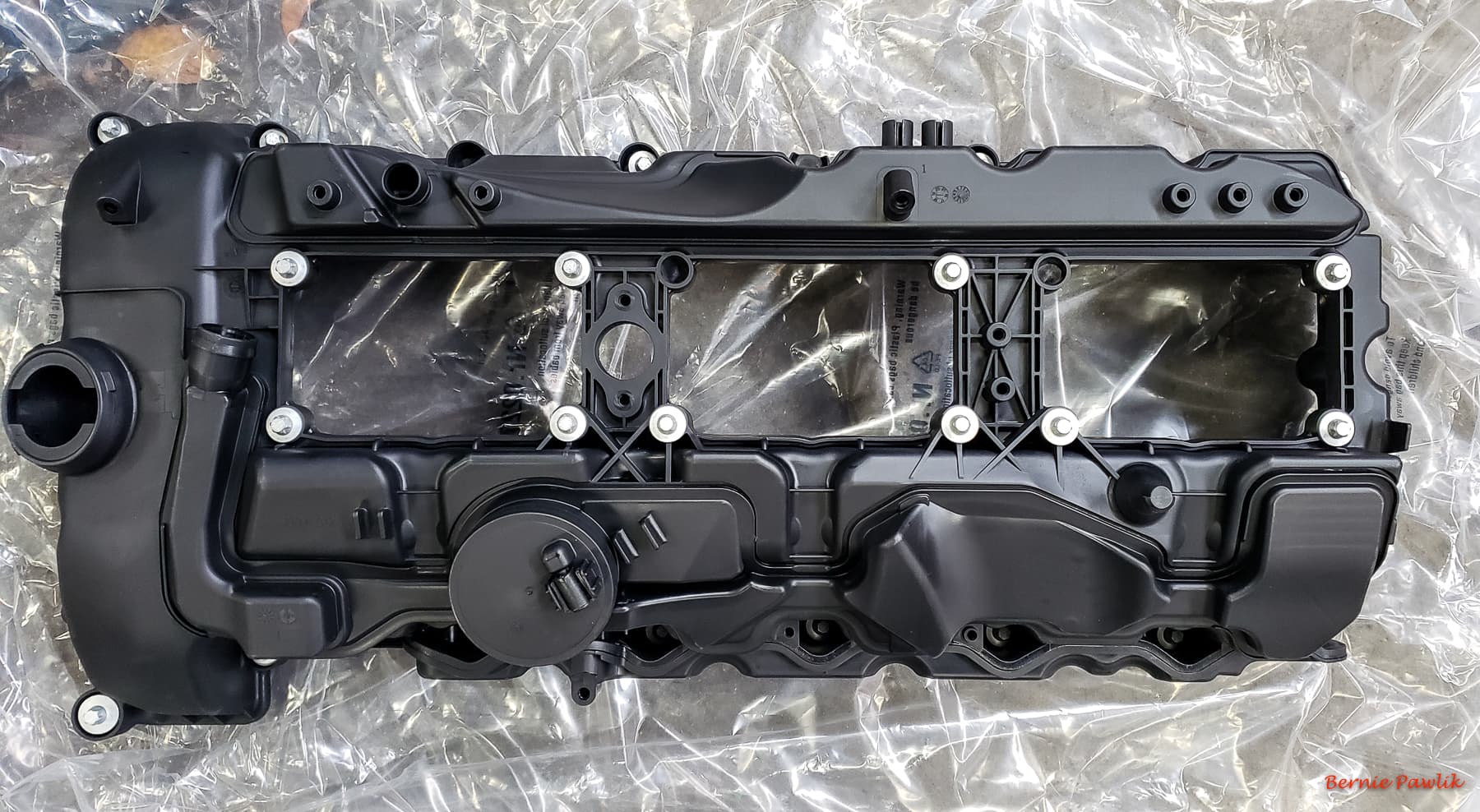 So integrated with these valve covers is the crankcase breather mechanism that which would be like the PCV valve. That's part of this unit here. There's a breather pipe somewhere else too, which I can't quite see. That is actually a breather nipple there as well. But these parts, there's little valves inside and they tend to wear out over time. And of course, because you can see this is all integrated with the valve cover. So it needs to be replaced. And so then that is a failure item.

Here's a view of the valve cover on the under side. 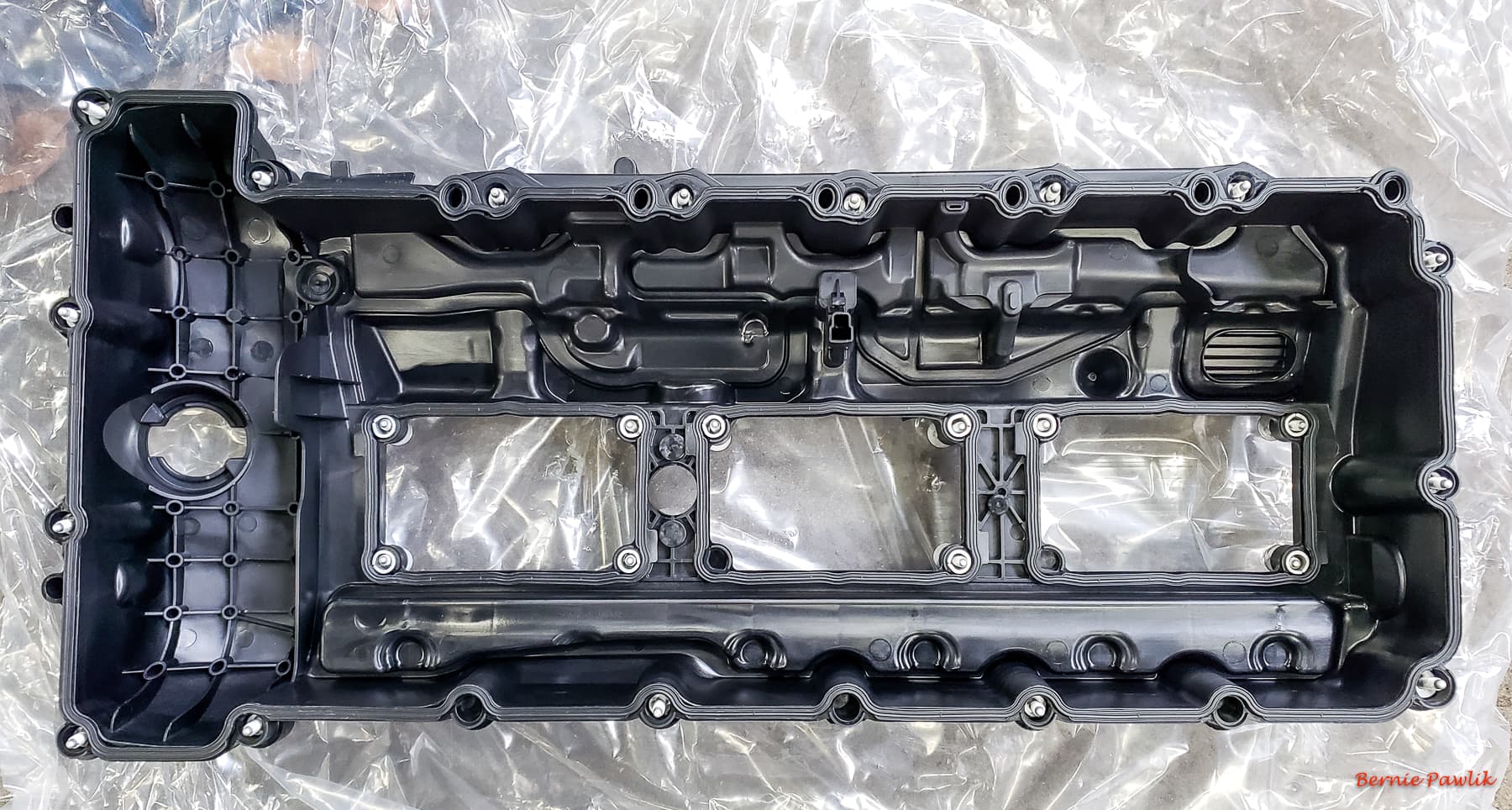 Again, this area is where the spark plugs and ignition coils go. These openings, cam shafts, the like sitting here. You can see the gasket around the edge here. And there's gaskets in the middle as well around the ignition coil and spark plug tubes.

Yeah, so the PCV valve mechanism and the crankcase breather mechanism are really the one item that does fail too that can cause some problems. Here's a view inside the engine here. 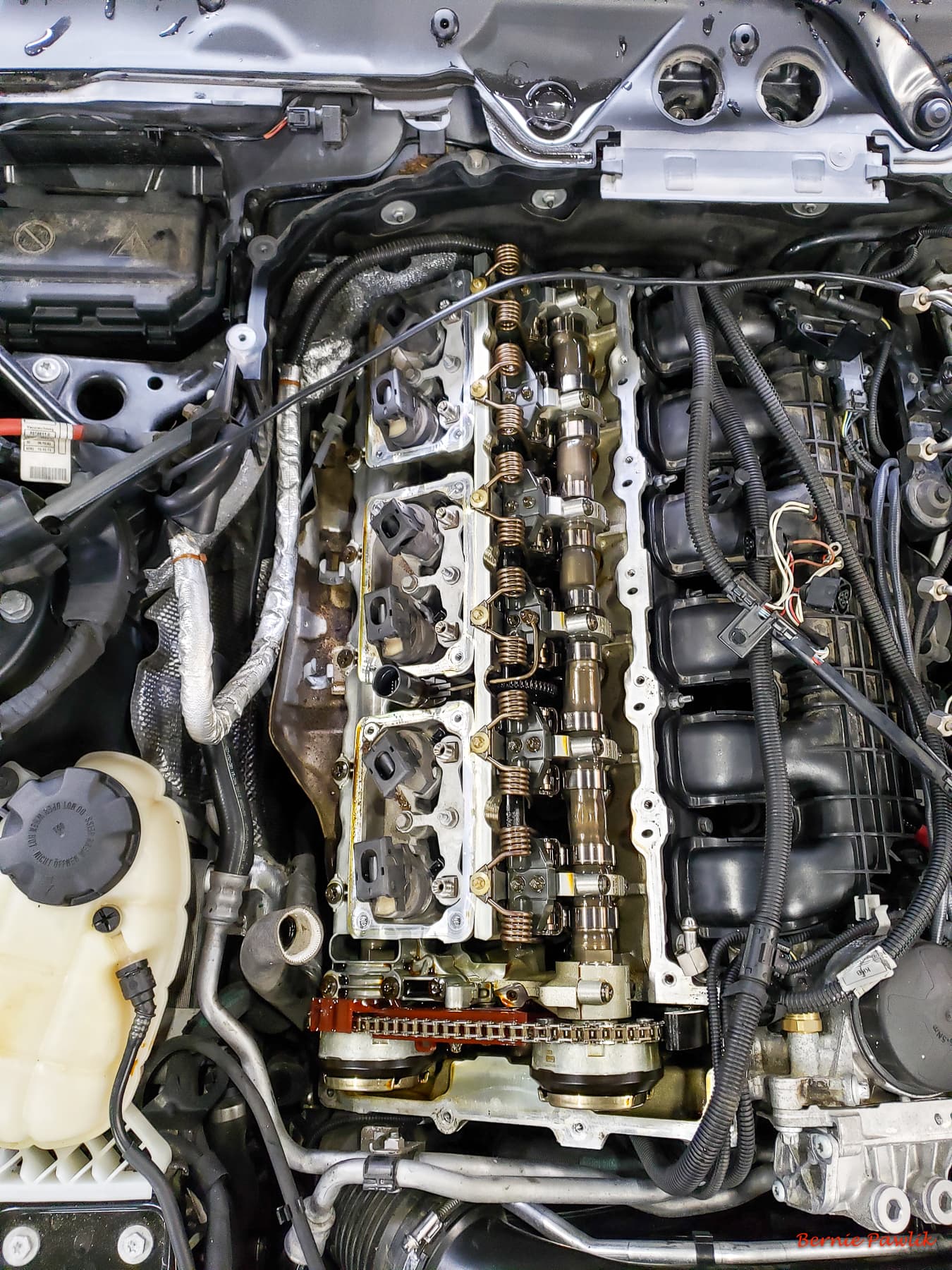 You can see this is the intake cam shaft, the timing chain, ignition coils and spark plugs over in this area here. And then the exhaust camshaft is located here. Variable valve timing, the VANOS system as BMW uses. But also this has a variable valve lift for the intake valves, which is an added piece of complication, but pretty cool engineering.

Closer view up here, you can see some of the variable valve lift mechanism over here. 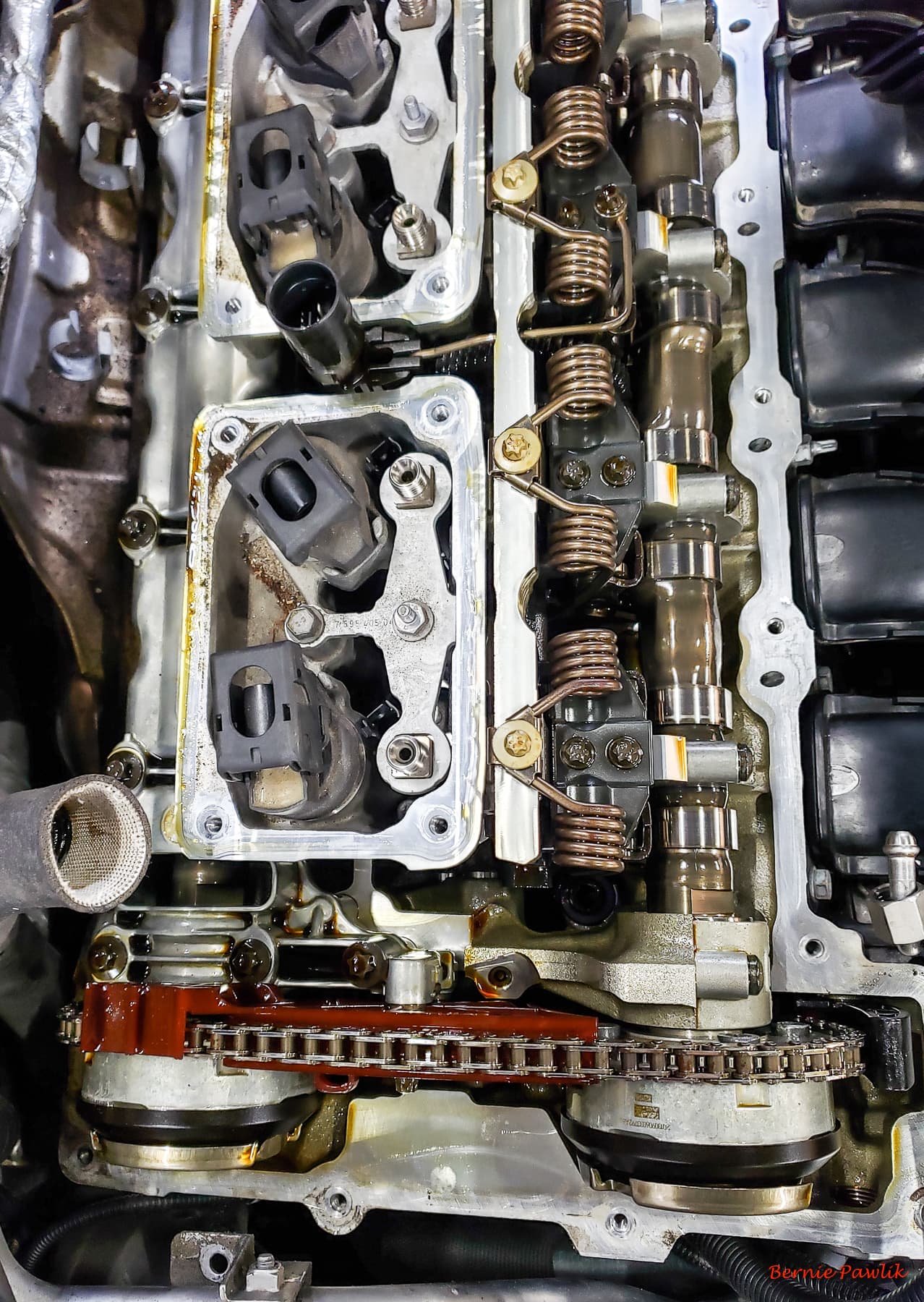 All electronic and oil controlled. So critical to keep your oil clean and in good shape. We talk about the frequency of oil changes. It's super important to do in these vehicles. Ignition coils are here. These are the tops of the fuel injectors here. You have to take the fuel injector pipes off to get to the valve cover. I think that's all we're looking at for our picture show.

Mark: So this looks like a pretty involved repair job.

Bernie: It is actually. You have to take all the fuel injector pipes off, there's a lot of wiring that goes over the valve cover needs to be removed. Plus the engine kind of sits under the cowl of the, under the hood, you know, it's tucked in.

So there's a bunch of cowl covers that need to be removed to access the valve cover to take off. So it's a pretty involved job. Again, hence the idea of doing it right the first time and not going, Well, we'll just change a gasket and then find it fails. Or a PCV valve fails a year or two down the road. You got a yard the whole thing back off again, just to replace a part that you've already done. Sometimes, you know, repairs in modern cars are more expensive. They don't need them as often, but when you do it, you do it right. And then you know, the problem just doesn't come back to haunt you later.

Mark: So these engines started as a fairly simple, straight six, and have kind of evolved into these incredibly complicated engineering marvels essentially.

So it allows for a lot of control, but, you know, the more we do these podcasts, you look at the how complex these engines are. Like how much more can you do to squeeze a little more power out of them? It's amazing. But then you look at an electric motor and it just rotates. There's really not much, I mean, they can probably fail catastrophically and the whole thing goes bad, but with all the little bits and pieces and moving parts in an internal combustion engine, it's miraculous, and it's kind of, I think run its course.

Mark: How are these four series BMWs for reliability?

Bernie: Yeah, they're good. I mean, they've kind of taken over where the three series left off and they're a good car, but they have their issues. Water pump issues, oil leaks. This vehicle doesn't have particularly high kilometres, you know, and it's got oil leaks. So I find BMW fluid leaks are kind of an issue. But it's a nice car. You're gonna pay a little more for repairs.

Mark: And also BMW, in a way, I don't want to intimate any kind of dastardly intent here, but they have really long oil change intervals that you don't agree with.

Bernie: Exactly. Yeah. So you know, to me it's just kind of a sales issue. I think we've talked about this in the past. But their oil change intervals and a lot of them are 24,000 kilometres, which I think is ridiculously high, especially when you consider the complexity of this engine. It's turbocharged, it just needs clean fresh oil.

It doesn't need to go 25,000 kilometres. You're better to do it at 12. You know, keep it clean, keep it fresh. There's just so many things that can go wrong when oil gets grungy and dirty and wears out. It just doesn't make any sense. So, you know, if you're buying the car on a three-year lease yeah just do the 24 K change, you know, because you don't probably don't care. But if you're going to keep the car or if you own the car, do it frequently. And even 12 Ks is not that often. So it's a long period of time. So keep it fresh. Save yourself some money.

Mark: If you want honest, for real based on experience repairs on your BMW, the guys to see are Pawlik Automotive. You can book online, pawlikautomotive.com. You can call them to book, 604-327-7112. You have to book ahead, they're busy, always. Check out the website pawlikautomotive.com. If you want to see the kind of history of all the makes and models and types of repairs that we've covered over the last 10 years. Or the YouTube channel Pawlik Auto Repair. We really appreciate you watching and listening. Thanks Bernie.

Thanks Mark. Thanks for watching.