Mark: Hi, it's Mark from TLR. I'm here with Mr. Bernie Pawlik, Pawlik Automotive in Vancouver. Vancouver's best auto service experience, they've only won best in Vancouver, best auto repair in Vancouver, 24 times, as voted by their customers. And so we're talking about cars. How are you doing Bernie?

Mark: So today's victim is a 2014 Dodge Ram ProMaster van, in the running for the longest title ever, 3.6 litre that had some cam shaft and other assorted issues. What was going on with this vehicle?

Mark: So how did you go about diagnosing the issue?

Bernie: So we basically removed whatever covers off the engine we needed to. Warmed the engine up until we could hear the noise and then listen with a stethoscope. That's usually the best way for us to find noises. And there was definitely ticking coming from the front cylinder bank from the left bank of the engine.

Back of the engine was quiet, fortunately, because this is a transverse mounted engine in the rear bank is like it's tucked right in against the firewall, very difficult to access. They don't give you any covers, like they used to in the vans of olden days. So it was front bank, fortunately, and that's where the noise is coming from.

We weren't certain exactly what it was, but suspect it was probably a cam shaft or a lifter or a rocker arm or something, which are common failure. Somewhat common failure parts.

Mark: So what did you do to repair the issue?

Bernie: So we basically removed the intake manifold, remove the front valve cover, took things apart and found, well, I'll get into the picture show. We found one rocker arm in one cam lobe, pretty badly worn. There's our Dodge Ram 2014 ProMaster van. 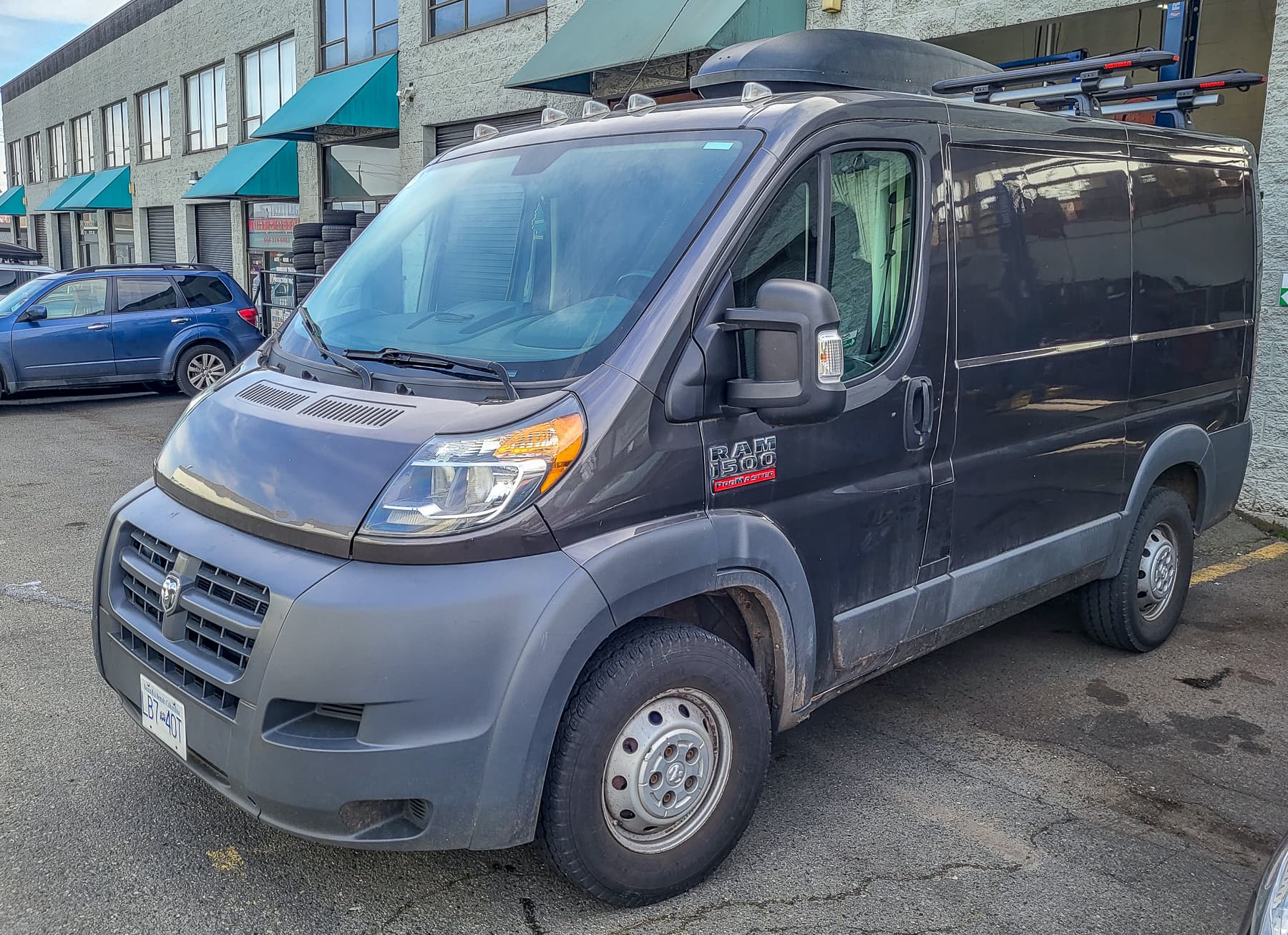 There's the hood where the engine sits in and all the action happens. 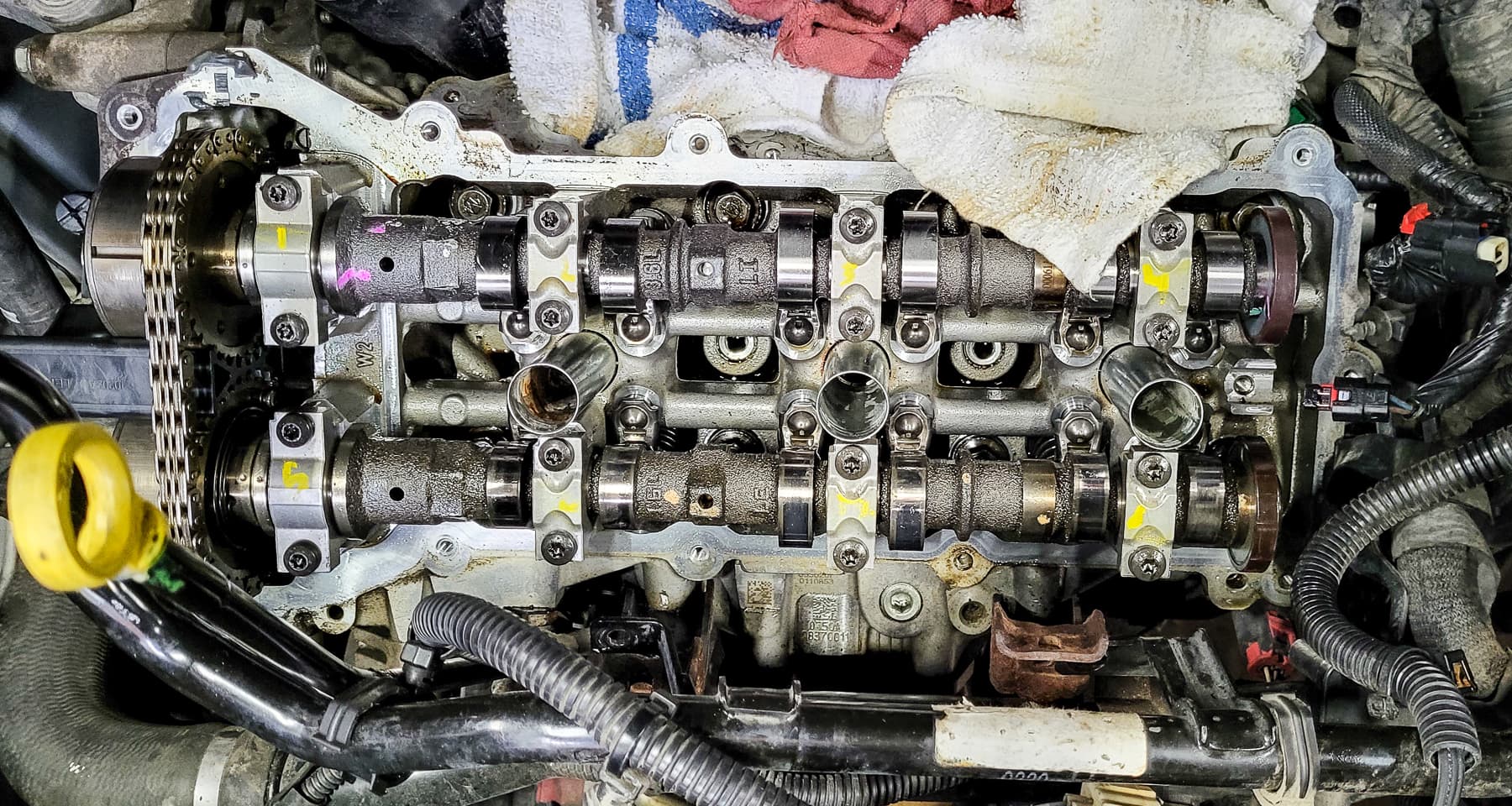 There's a view with the front valve cover removed. You can see the timing chain on the left side here, cam shafts. This is actually after we did our repair work. So if you're looking at this closely, you can see that this is the exhaust camshaft on the bottom.

You can see somewhere on that and they intake cam, which was brand new, nice and clean. Never been used yet. So that's basically the layout of things after the replacement was done. But we can have a look at some of the worn out parts here. 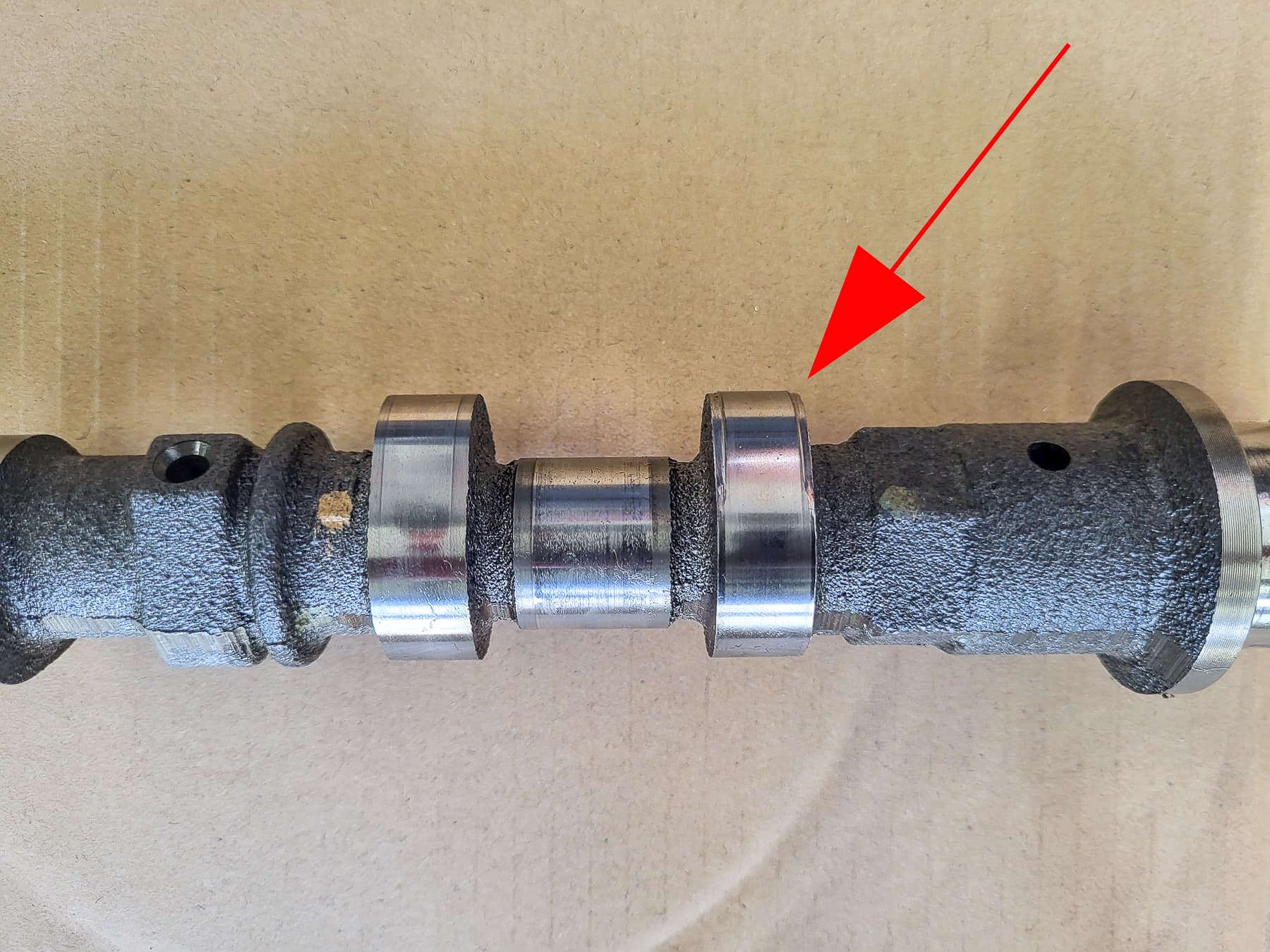 So here's a close up view of the cam shaft. And you can see on these lobes, this is a good lobe, relatively good. This one's worn. You can clearly see material missing from here. So this vehicle uses roller lifters. Again, we'll have a look, this is actually a better view. Sorry, roller rocker. 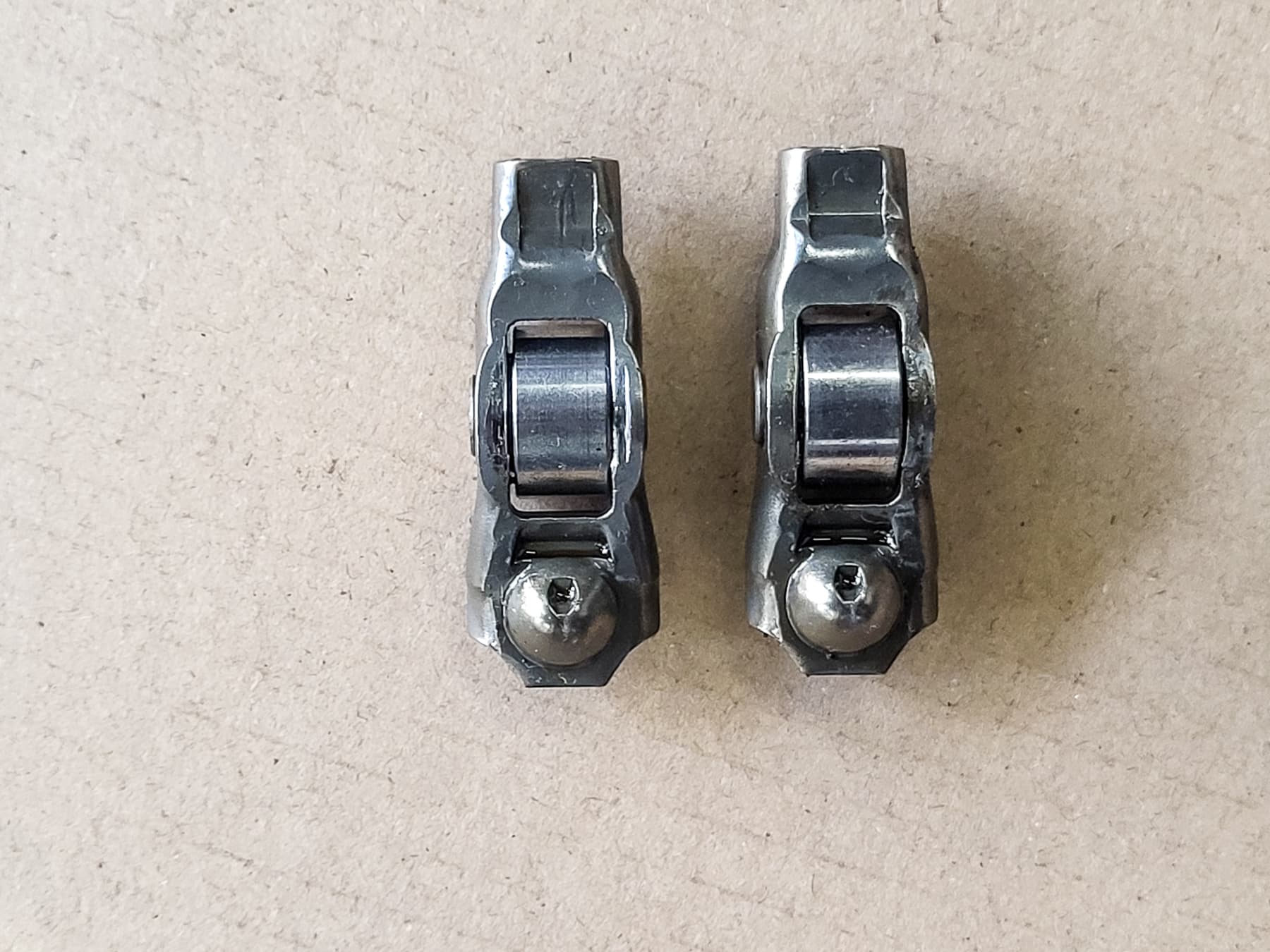 So the the rocker arm basically has a roller in it for reduced friction, but what happens is eventually something occurs where the roller stops rolling and it tends to seize up. And if you look right where I'm pointing with the mouse here, you can see kind of a groove that's worn there, but not in this one. This is one that's in good shape. This one is worn. 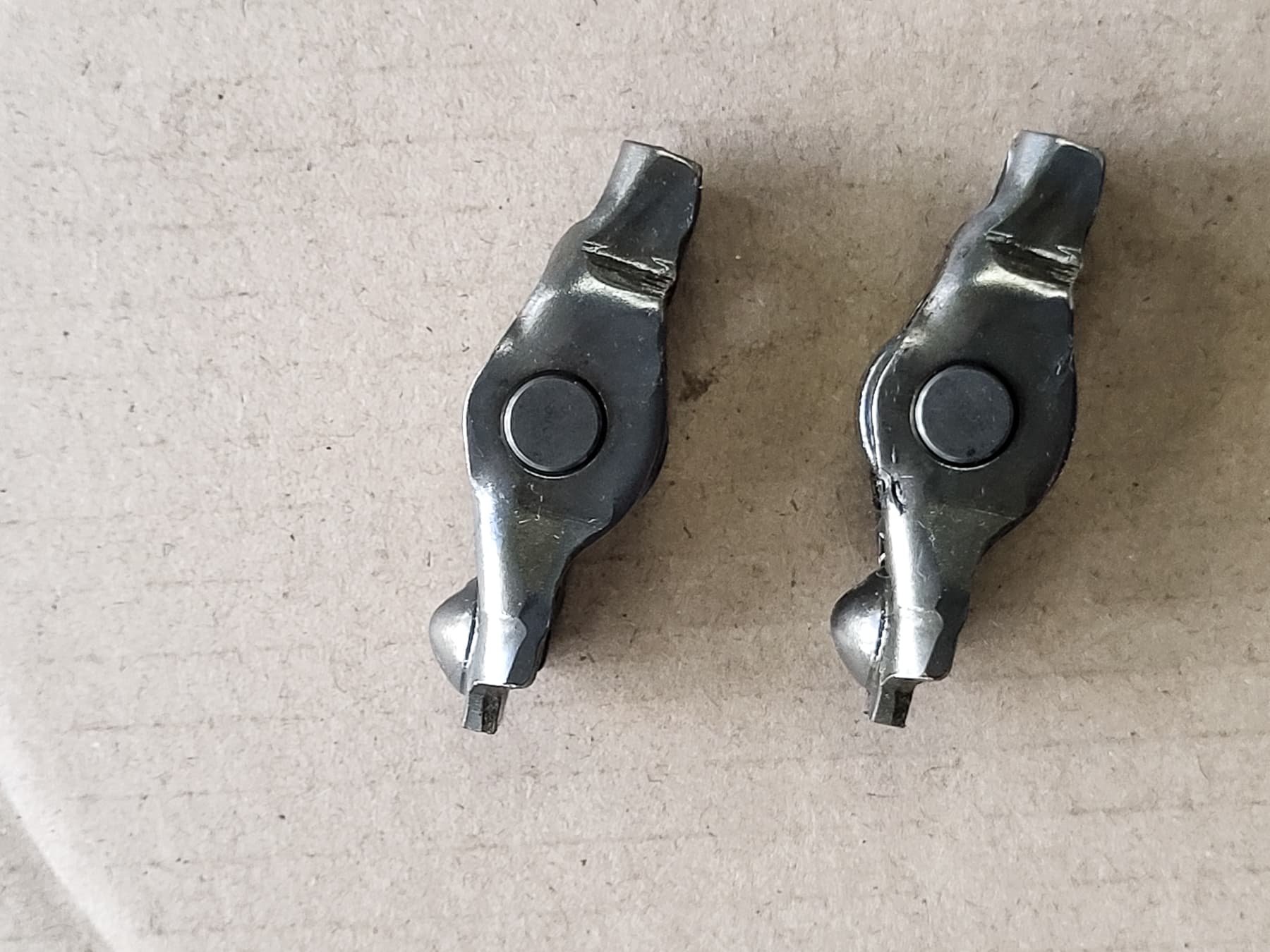 And I'm going to show another picture here that demonstrates when you look at a side view, you can't see the roller on this lifter, but you can see this one. There's needle bearings inside these rollers, and what's happened is the bearings have worn out. And so the roller kind of collapses, then it doesn't actually roll on the cam shaft. The camshaft starts grinding against the rocker arm. And that's what causes that wear. So here you can see that roller that's present. 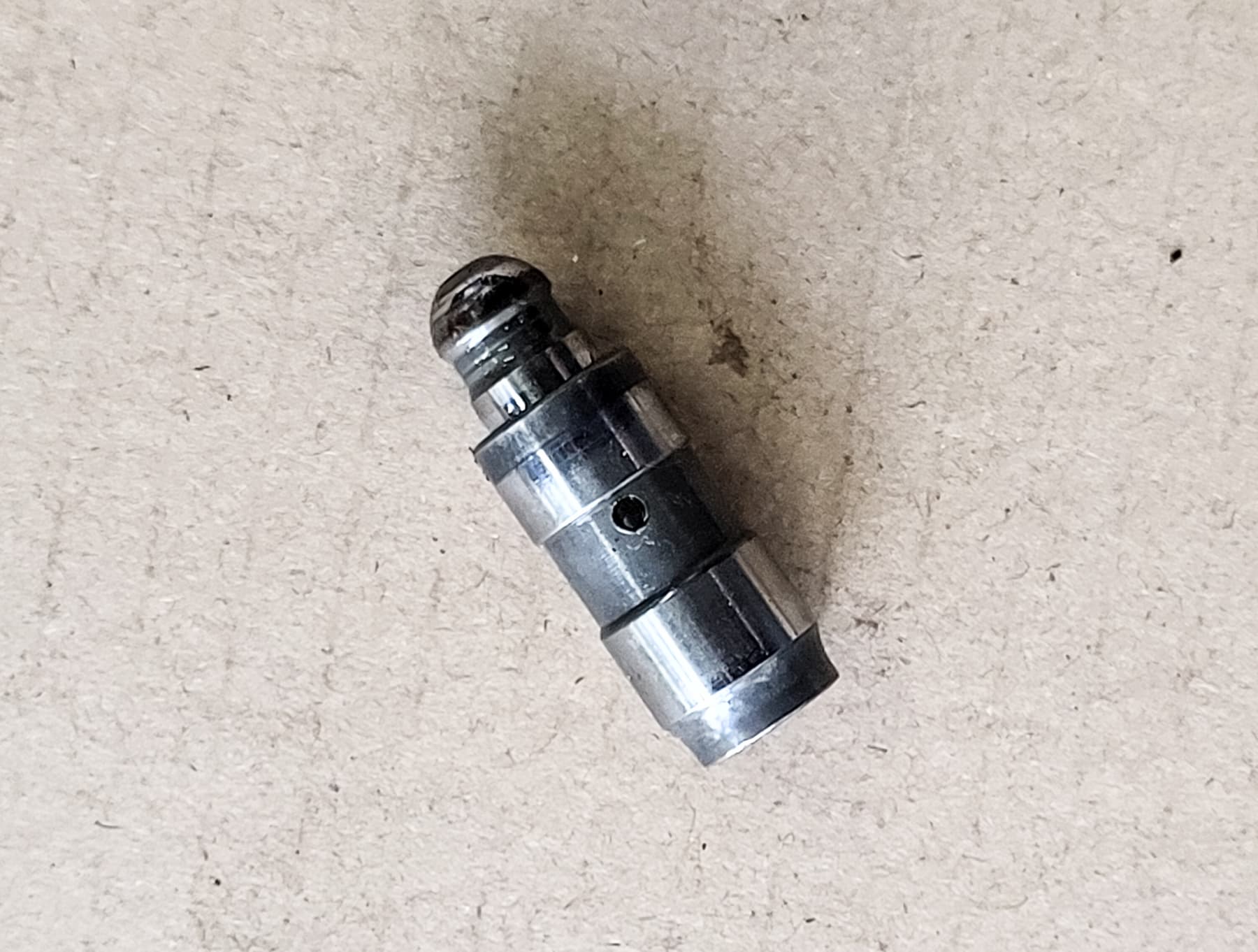 So other components we replaced, the valve lifter. This is a hydraulic lifter. So one end of that rocker arm sits on top of this lifter. It's filled with oil pressure through this hole. That removes the valve lash adjustable. I mean, it's the technology, it's been around for a long time. Again, these can fail too and collapse, and that can cause a ticking sound.

And a larger view of the cam shaft. There's sort of a full view of the old cam shaft. There's the worn cam lobe on the left there. I didn't put an arrow to mark it, but if you look closely, you can see the worn lobe and these ones are, you know, there's a little bit of wear, but there's nothing wrong with them, but you can't just change one lobe. You've got to do the whole thing. So, I think that kind of covers our picture show.

Mark: So why not do the rear bank at the same time?

I should've taken a picture of the engine as it sat in the engine bay and you'd kind of get a sense of why, but it seems most common too, from some of the research that we've done, that this front bank, the left side seems to have more issues than the right, not entirely all the time, but it seems to be more common in this case based on what we found. Just made more sense economically, just to do the front bank.

Mark: And how common is this issue with these vehicles?

Bernie: It happens fairly frequently. We haven't done too many of them. And considering the amount of these engines there are out there, I guess it's something that can happen. But you know, it's not a guaranteed to happen kind of thing like a Subaru 2.5 litre timing belt engine head gasket job where between zero and 200,000 kilometres, you're guaranteed to have a problem. This is not one of those things, but you know, it does happen on quite a few models.

Mark: So it's got variable valve timing, you mentioned. So does that increase the complexity of the job?

Bernie: It does. But as technicians, we're getting kind of used to this kind of thing, cause everything has it. It used to be a one-time variable valve timing was a rare option on fancy cars. But yeah, there's certain procedures we have to do. I mean, all these modern engines with the way that cam shafts and variable valve timing is set up, we need special tools to lock things in place. And this one was actually surprisingly less complex than a lot of other engines that that we work on in terms of cam lockout tools and things. But yeah it is more complex than the days of old where the cams all had key ways in them and everything would just kind of lock together. It's like those days have been gone for a couple of decades ago now.

Mark: So would there be anything that the owner could have done? We didn't talk about how much mileage this vehicle has, but was there anything that they could've done to have helped prevent this from happening?

Bernie: Good question. Okay, so mileage 157,000 kilometres. So what's that in miles that's, you know, just around a hundred thousand miles, if you think in terms of miles. Not a huge amount of mileage, I think, but it's definitely got some years of experience.

Regular oil changes are critical and don't miss them, you know, like the factory recommended is the very maximum you should ever go. And you should probably change oil sooner and use good quality oils. There was no sign that this engine had been abused in terms of, there was no sludge or gum or anything inside the engine, but changing your oil regularly is about the only thing you can really do to prevent something this from happening.

And it still can occur. I think with a car, is how well designed is it? How well are the components built versus maintenance. But the most important thing is do your maintenance, you know, change your oil. If it says every 7,000 kilometres change it every six, do it a little sooner. It's better. And if you leave it a little longer, sometimes even just leaving a thousand Ks over, well, it doesn't seem like a bad idea. It's like, oh, well, whatever it's working fine. It can cause problems down the road.

Mark: So how are these Ram ProMaster vans for reliability?

Bernie: Pretty decent. Yeah. Pretty decent van. I mean, we don't work on a ton of them. There's not too many of them around, but from the ones that we've worked on, they seem to be pretty reliable so far. But, I find Chrysler products are a little lower on the totem pole of really reliable vehicles. So you'll have a few more issues with them and you might with something, well, like a Toyota, it's always my benchmark comparison.

People listening to this, probably get sick, he keeps comparing it to Toyota's again. But yeah, I am. But other than that, they're better priced, so maybe that's an advantage. But overall they're pretty good. They're decent vehicles.

Mark: If you need some service for your Ram ProMaster Dodge. Any Dodge product, basically. Any Chrysler product. Experts who know what they're talking about. Get your vehicle running property. You wouldn't need maintenance on it so you don't have issues. The guys to see are Pawlik Automotive. You can reach them on the website to book pawlikautomotive.com. They'll call you back. They'll find out what's going on. They'll get you in and get you looked after. Or you can call them (604) 327-7112. Remember, they're busy. You have to call and book ahead. They're busy all the time. Pawlik Automotive in Vancouver. And thank you for watching. We really appreciate it. And listening. Check out the YouTube channel. Pawlik Auto Repair, close to a thousand videos on there of all makes and models and types of repairs. Thanks Bernie.