Mark: So today's victim is a 2014 Land Rover LR2, that had a cooling issue. What was going on with this vehicle?

Bernie: So this vehicle came to the shop with the radiator fan running full bore, and it would never shut off. So as you can imagine, the battery would be going dead fairly quickly. It's a high current draw type of circuit. So the fan was basically stuck on and that's what we were tasked to fix on this particular vehicle.

Mark: So where do you start? Where's the testing and diagnosis process that you follow to fix this?

Bernie: Well, there's really only a couple of things that'll cause this fan to run on. There's a fan module located on the actual radiator fan motor, and then there's a computer of course that turns the fan on and off.

So the problem's gonna lie either in one of those two items. Where the computer's telling the fan to just keep running or else the actual module has a problem. So that's where our testing and diagnosis went. Testing wiring circuits and operation of items. And we determined that the actual fan control module was keeping the fan stuck on.

Mark: So are there options, do you have to go to the dealer to get that module or are there other places that you can get a replacement part?

Bernie: No, there's lots of aftermarket parts available. I mean, of course we did look at what was available. You know, we're in Canada, so our availability for parts is a little more limited than it is in the US. Of course we can buy anything from the US or rest of the world, so there's lots of options. But we prefer to deal with our local suppliers for warranty issues and things. And the only thing we could really find locally was to buy the fan brand new from the Land Rover dealer.

I don't know if I want to tell, well, it's a couple thousand bucks to buy that. And so you have to buy the module and the fan as an assembly from Land Rover. So we quickly looked for other options and found that you can buy the module separately. Unfortunately none of our local parts suppliers had anything, which is kind of surprising because there's an awful lot of these vehicles around where we live and they should stock 'em. So we had to order it outta the US, which doesn't take very long and saves the customer awful lot of money.

Mark: So how often is it that the dealer provided replacement parts are a bigger assembly than a separate module, like you can order from an aftermarket provider.

Bernie: A lot of times it's like that. I can't say it's always like that, but there are many times where it's like that and they just sell a complete assembly and a complete unit. And I think sometimes, you know, people go, dealers are so expensive. And it it's little things like this I don't know that, you know, on their sort of hourly rates of labour, that they're necessarily more expensive than independent auto repair shops.

I mean, depends on where you are and who you're dealing with. But I think a lot of times, it's the way you buy parts from dealers. Most dealers will never go with aftermarket parts. They only sell their OEM parts. And so these are the areas where, in the aftermarket business, we have a great advantage.

Mark: Would it not be better to actually have replaced all of that module? The fan and the module itself?

Bernie: Well, you know, that it's a good point. I mean, the fan has got, this is a 2014, it's got that many years of operation and running, but there's really nothing wrong with the fan. And so for the price differential, it really made more sense just to change the module. I will say one thing about OEM parts is mostly, I mean, 99% of the time, I'd say the quality of them is much better than aftermarket.

If you look online, you'll find some really cheap fan assemblies, but cheap in my opinion is you know, cheaply made, low grade motors. I've put some parts in cars that just, it makes me sick, you know, that they actually are allowed to even sell stuff with such low grade quality. So, you know, quality parts are important. And just changing the module is not a very difficult job.

So if the module does go faulty, it's not the end of the earth. You're not wasting a lot of money, I think is what I'm trying to say. So you gotta be careful where you buy your parts. If it's too cheap to be, you know, it can be very cheaply made, especially with fan motors.

So in this case, we know the fan motor was working well. So why not just change the module because the fan could work for many, many years. Can I show some pictures? 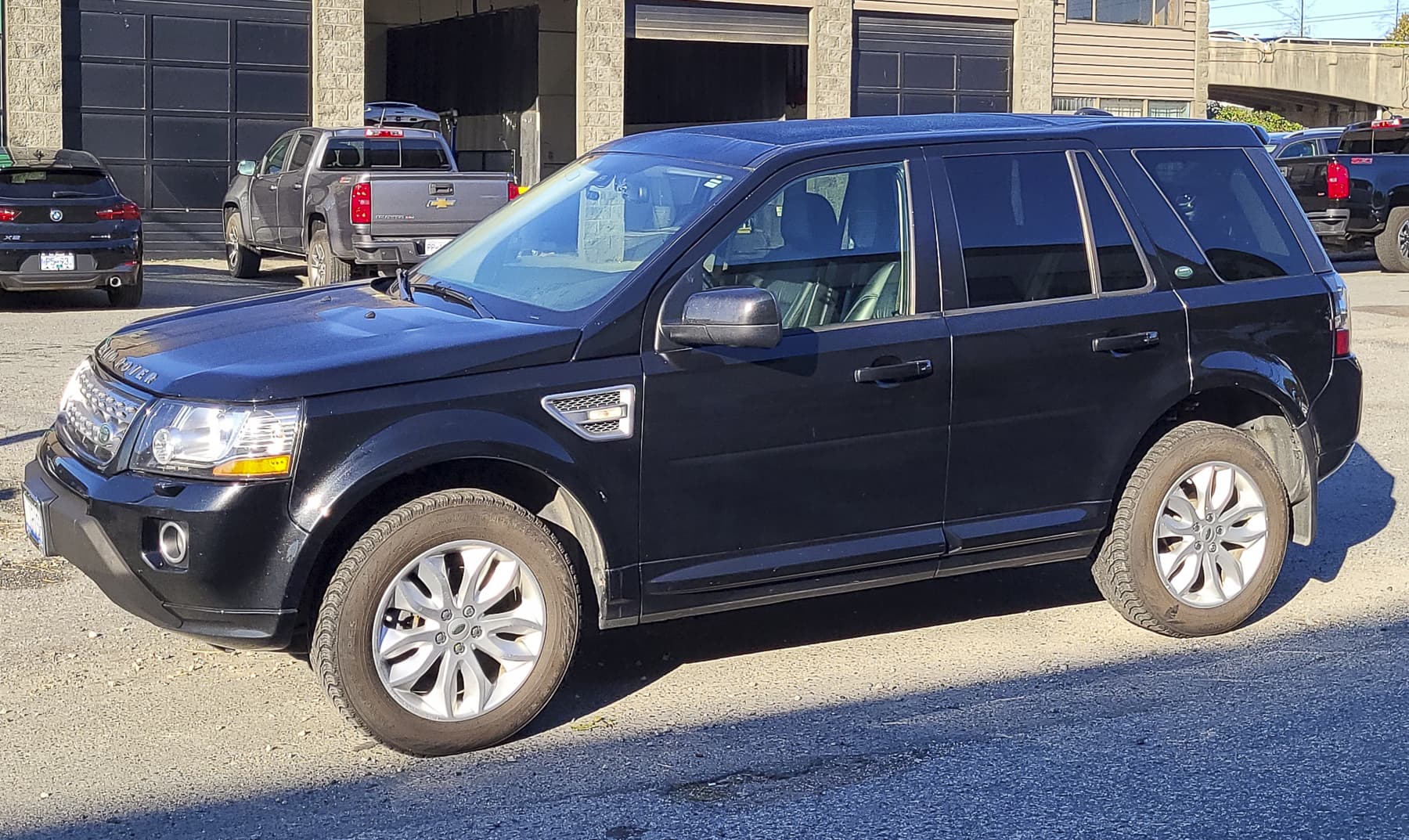 So there is a photo of a fan assembly, sorry, it's a little small, but this is basically the fan assembly. It's got two fans on it and over here is the module. And I apologize. It's not the greatest picture. I wasn't able to take a picture of the actual fan on the car for this one. So I had to borrow one. But the module sits right here. It clips into place. Again, it's not very easy to see on this particular thing. 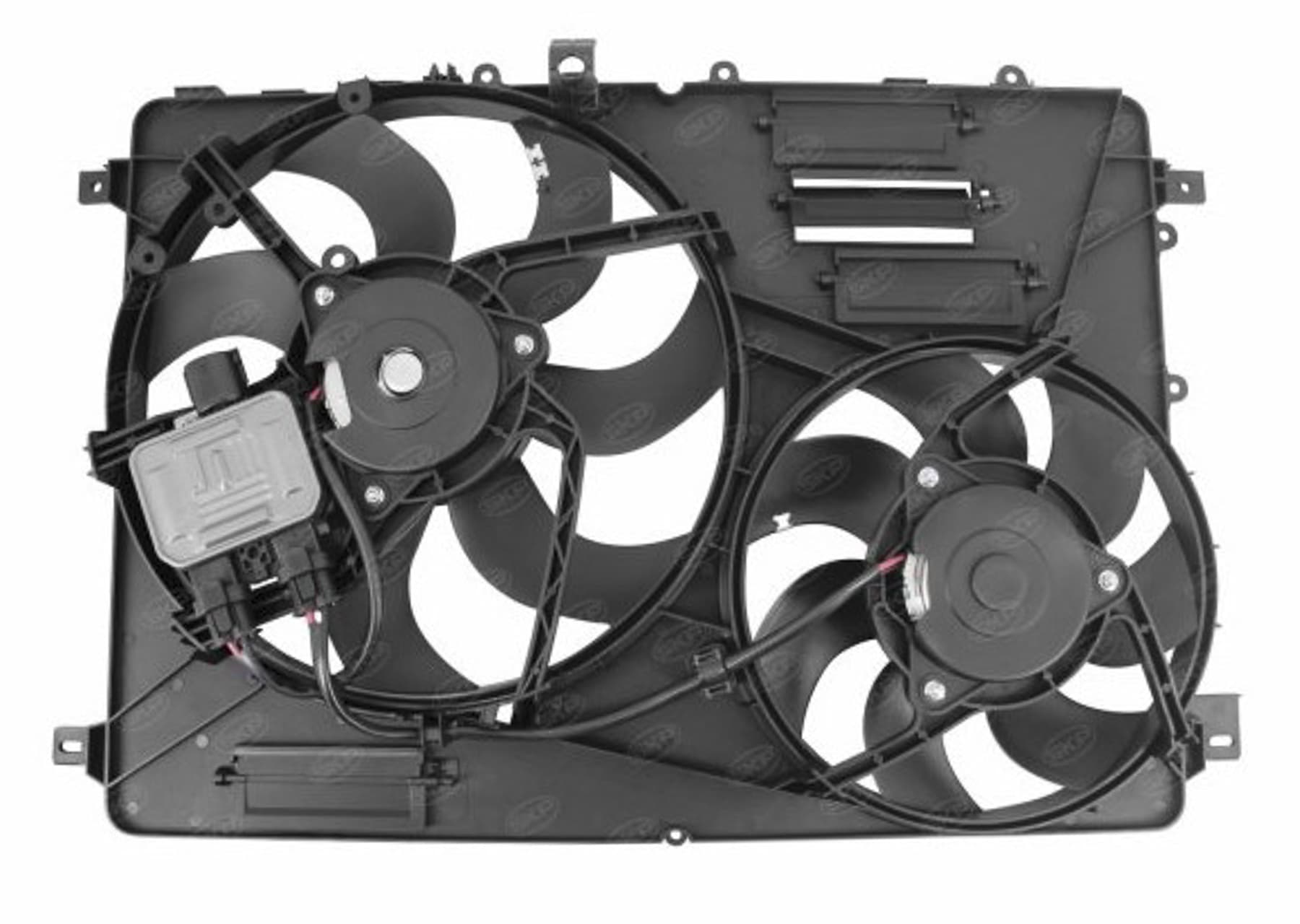 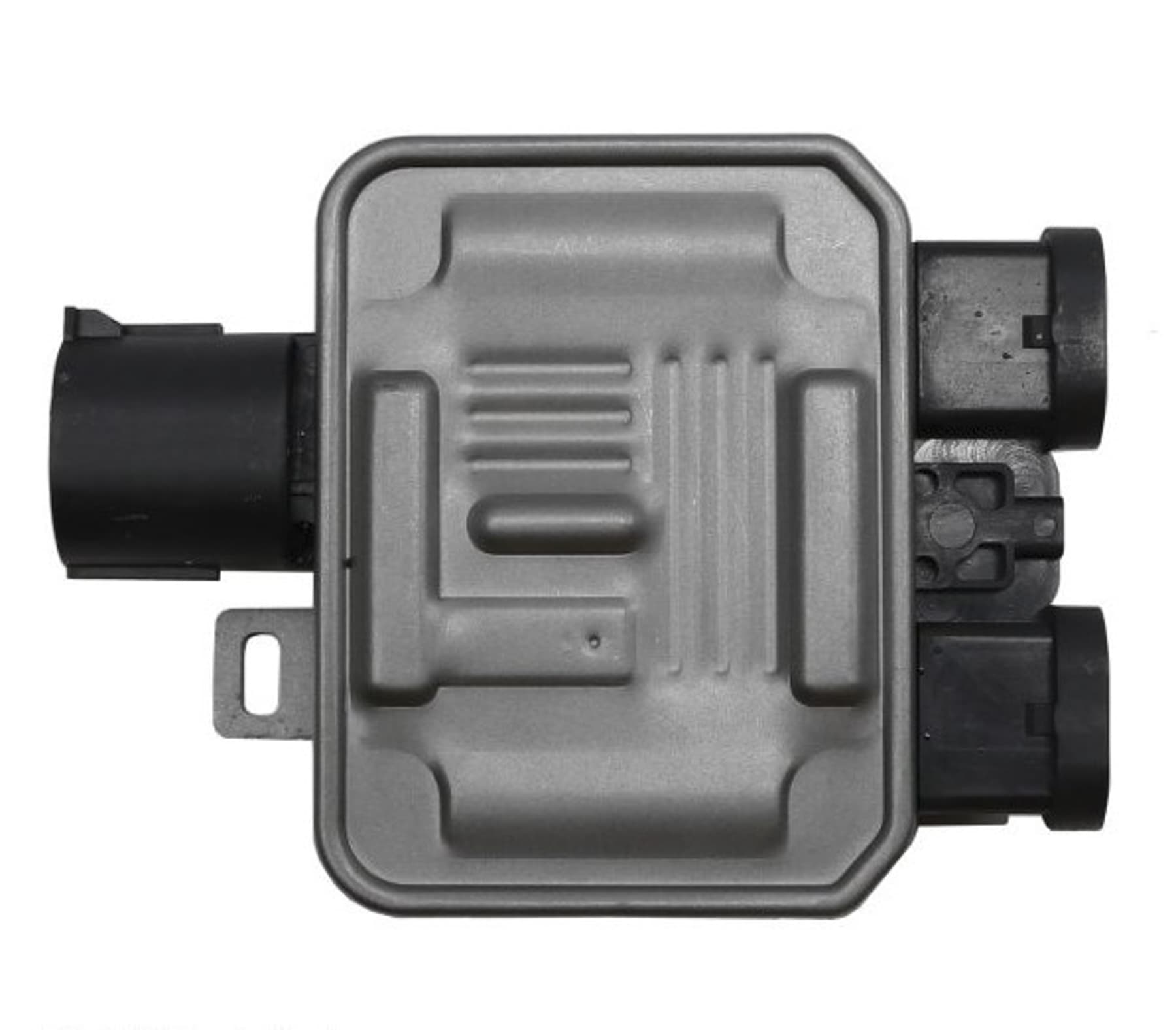 Bernie: So that's our basically short and sweet picture show.

Mark: So everything worked well after you replaced this module?

Bernie: Yeah. It's all good. It's a pretty easy test to verify that. If you plug it all in and the fan isn't running well we've solved that. But we do need to run at least a cycle or two to make sure it comes on. And one easy way to verify it works is to turn the air conditioning on because usually the air conditioner will pretty quickly turn, it doesn't always turn the radiator fan on, but most of the time that'll come on pretty fast cause it needs to draw air through the evaporator. Sorry, condenser.

I always get those, even though I've been working on cars for my whole life, get those confused. Is it the evaporator or the condenser? The condenser. That's the thing in the front.

Mark: So we've probably answered this before, but how are LR2s for reliability?

Bernie: Well, they tend to need a lot of repairs. This particular vehicle, this customer's a very good client of ours and he likes to keep his in very good shape. And over the last while he's spent an awful lot of money on fixing a lot of things. So the vehicle still drives like brand new, but there's a lot of things that have been replaced.

We've talked about the rear ends in these things going bad, but I don't even know if we've done the rear end in his, we probably have. But you know, there's a lot of other things that have gone wrong with the turbo charger. And so he's kept it for a while, but it is a 2014. It's really not even that old it's what, eight years old at this point and not with a huge amount of mileage. But he does use it well and has gone out in the bush, goes hunting with it too, which is nice to see people actually use an SUV for what it's meant for.

But anyways, there's a lot that does go wrong with these. They're a nice vehicle, but if you own one, you know, be prepared to be spending some money. My easiest way to answer.

Mark: If you're a proud owner of a Range Rover, Land Rover in Vancouver, BC, Canada, the people to see to get it fixed right the first time, are Pawlik Automotive. You can check them out on their website, pawlikautomotive.com. You can book online there and they'll follow up with you. Or you can call them at (604) 327-7112 to book your appointment. You have to call or book ahead. They're always busy.

Of course, on the website we have close to, or over a thousand videos like this. We've been doing this for 10 years now. Of course, there's our YouTube channel, Pawlik Auto Repair, same story. Everything's put up on there. And we really appreciate you watching and listening. Thanks Bernie.

Bernie: Thank you, Mark. And thanks for watching and listening. It's always a pleasure.