Mark: So today's victim, a reprise, a 2014 Land Rover LR2 that had a turbo problem. What was going on with this vehicle?

Bernie: Yeah, so this vehicle came to our shop with an exhaust leak issue. There's a ticking noise coming from under the vehicle. And, it was definitely an exhaust leak of sorts.

Mark: Okay. So what kind of testing and diagnosis do you have to do to find what's actually going on?

Bernie: Well, we used one of our best piece of testing equipment, our ears. That's the biggest diagnostic aid for this particular task. So of course, listening to the vehicle, trying to determine what area the sound's coming from. A hoist inspection visually looked well, we use our eyes too, looking at the exhaust for signs of leaks and then listening with either just our ears or to pinpoint things and which we need to do in this case, we have a stethoscope we've kind of adapted for listening to sounds and noises. So we basically listened around, found that there's a leak coming right from the exhaust manifold, where it bolts up to the cylinder head. And that is an integrated unit. It's the turbocharger and exhaust manifold all formed as one unit.

Mark: How common of an issue is this?

Bernie: Pretty common. They do fail a lot on these vehicles. We've done a few of them. And I expect we'll be doing a lot more of them.

Mark: You have some pictures?

Bernie: I do. Yeah. Pictures. Always the fun part. Okay. So there's a photo of the manifold removed from the vehicle. You can see a lot of black soot around here and again, this manifold is tucked in, it's at the back of the engine compartment. It's tucked way in, it's got shields and covers, but if you look close enough, you can generally see it. And think most of the times we've found it's the left side, the driver's side of the manifold that cracks. May not be in every case, but that's what we've noted so far. 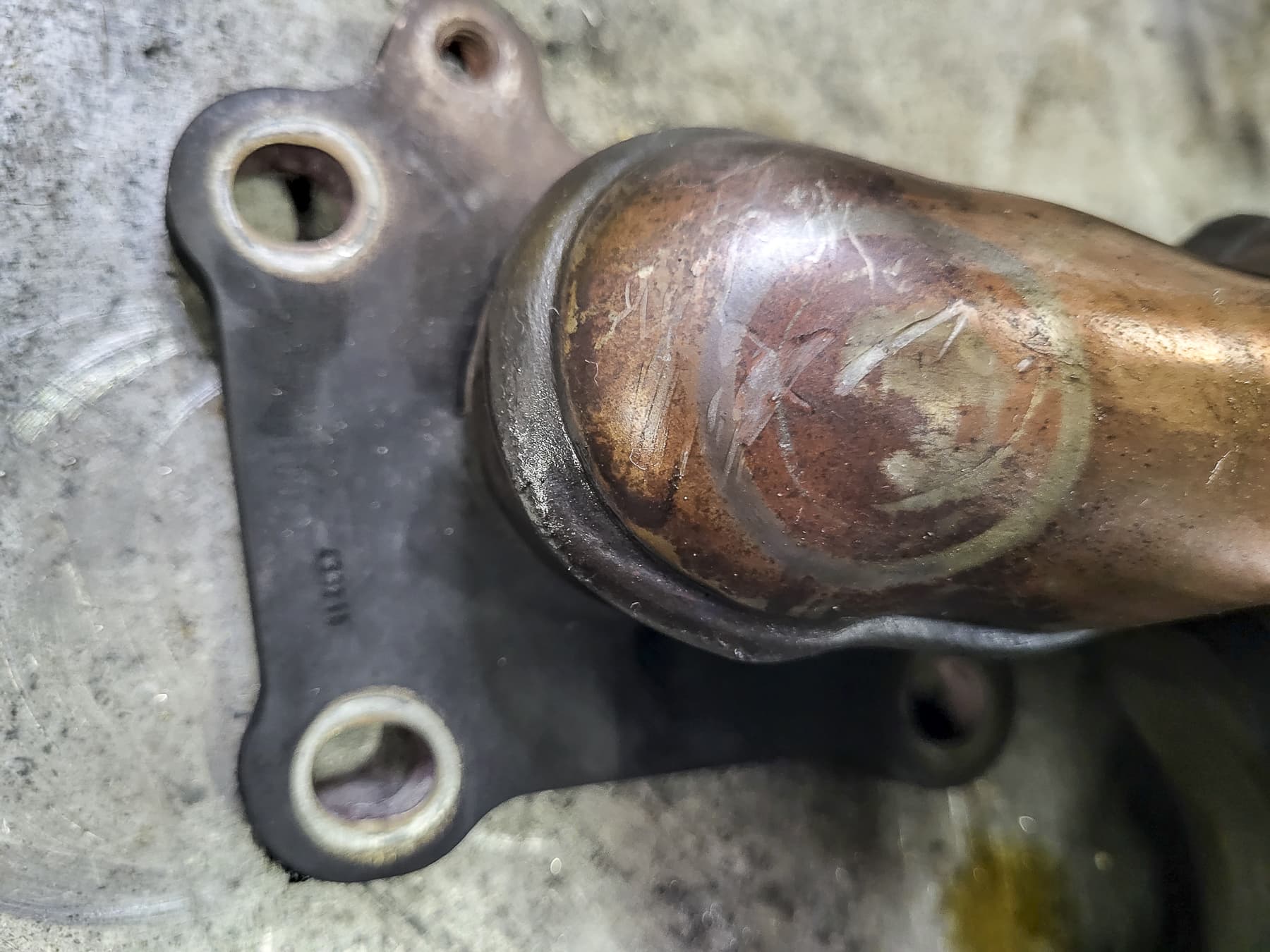 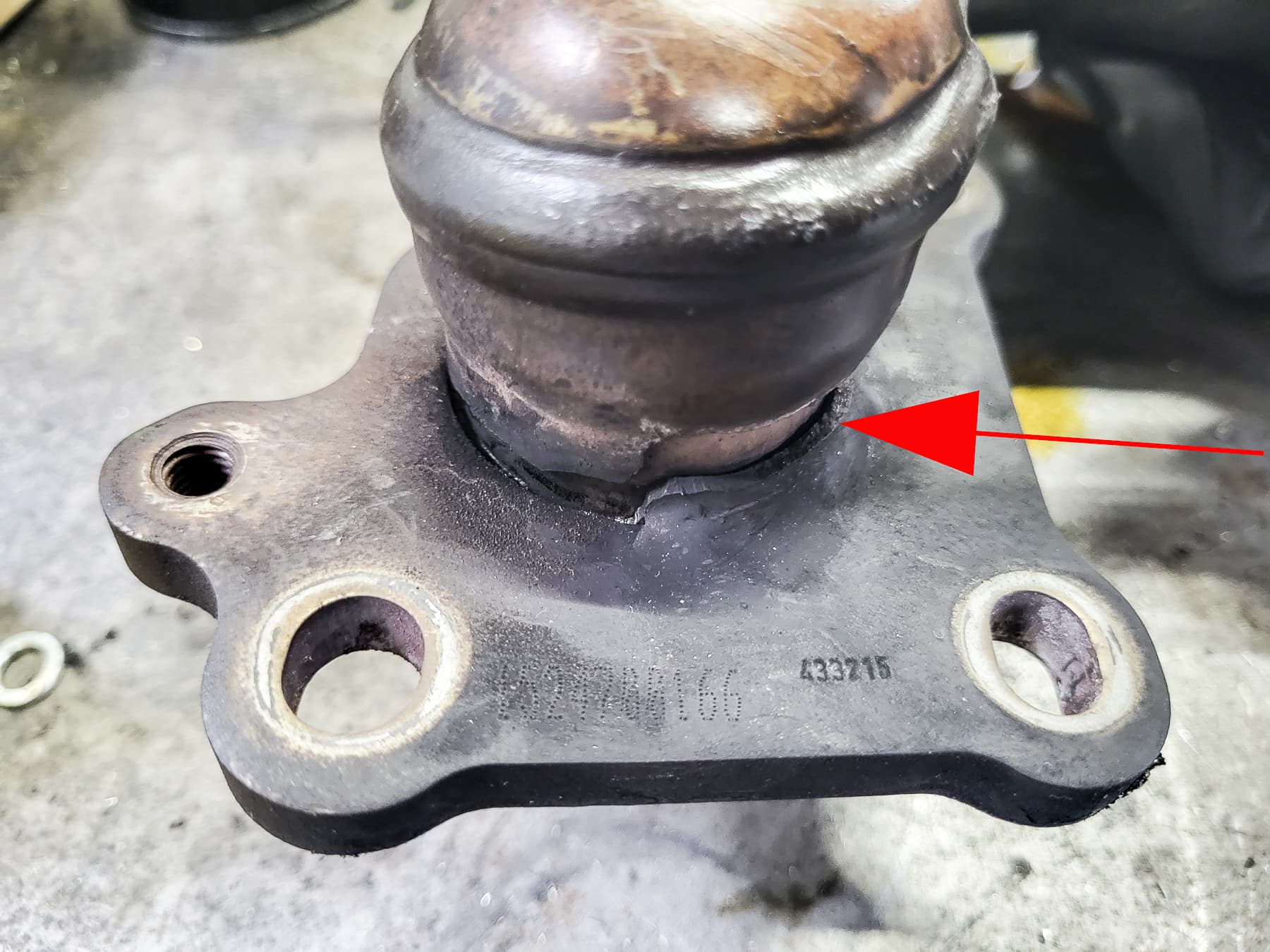 Here's a closer view of the actual crack. You can see it's all welded steel. Flange is just basically cracked off where the red arrow points. Actually, we've got one other view here. That is the old unit. So as you can see by the manifold, it goes directly into the turbo charger. It's all manufactured as one piece. It's compact, it saves space and quite a few manufacturers do this sort of thing. 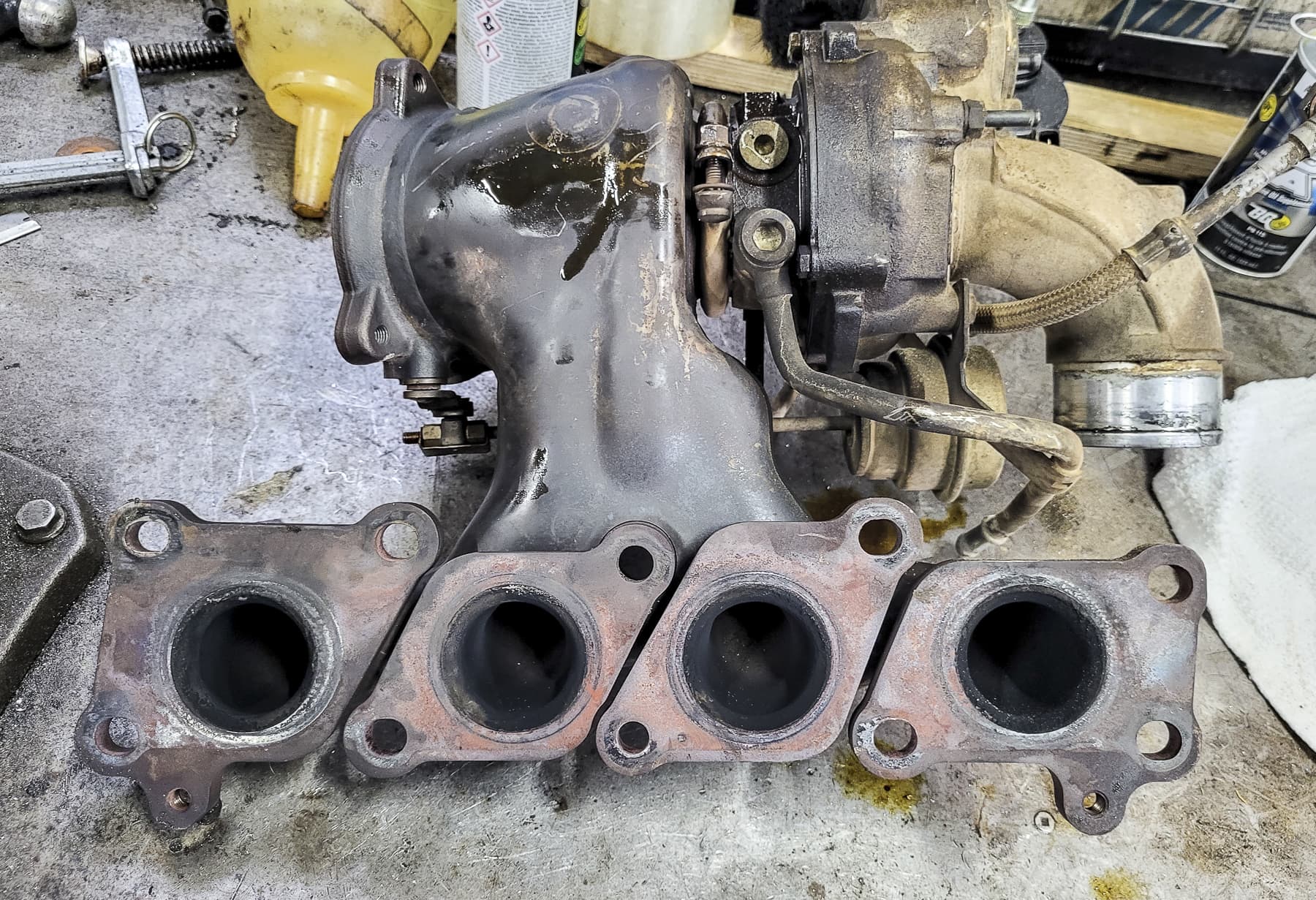 Again, here's our manifold. You can see there're four separate pieces and this is the broken piece here. Trying to flip it up on edge.

Mark: I'm just wondering how you repair you. Can't repair just that one, broken manifold or exhaust manifold. You have to replace the whole piece. It's all one.

Bernie: Yeah, you have to replace the whole piece. There are other vehicles where the turbo is bolted on separately, but in this one, it's a complete piece. So it does make for a rather expensive repair, but it's sort of normal nowadays.

So they put it together, you know, as one unit. And of course that does add to the cost. You know, that just made me realize when you mention that. I mean, it's possible not very likely that you'd be able to weld this back together, but it would take a lot of cleaning and likely would fail again. You know, why does it fail in the first place?

So it could be possible if someone was creative enough and had a jig to bolt it all together properly, it might be possible to weld it. But I wouldn't say it probably overall wouldn't be an entirely successful repair.

Mark: So when we're looking at that view, you've actually cut that one manifold piece for that particular cylinder out of the full manifold assembly.

Bernie: Are you talking about this picture right here? That we're looking at? Yeah. Yeah. This is just, this is just the view of this area over here. Yeah. Flipped upside down. So we actually haven't cut anything off. Okay. It's just the way the picture looks. You're just looking at one end of it.

So as far as replacements, you know, do we replace it with the same Land Rover part? No, the answer is there's an aftermarket replacement that deals with the issue. And this is it. 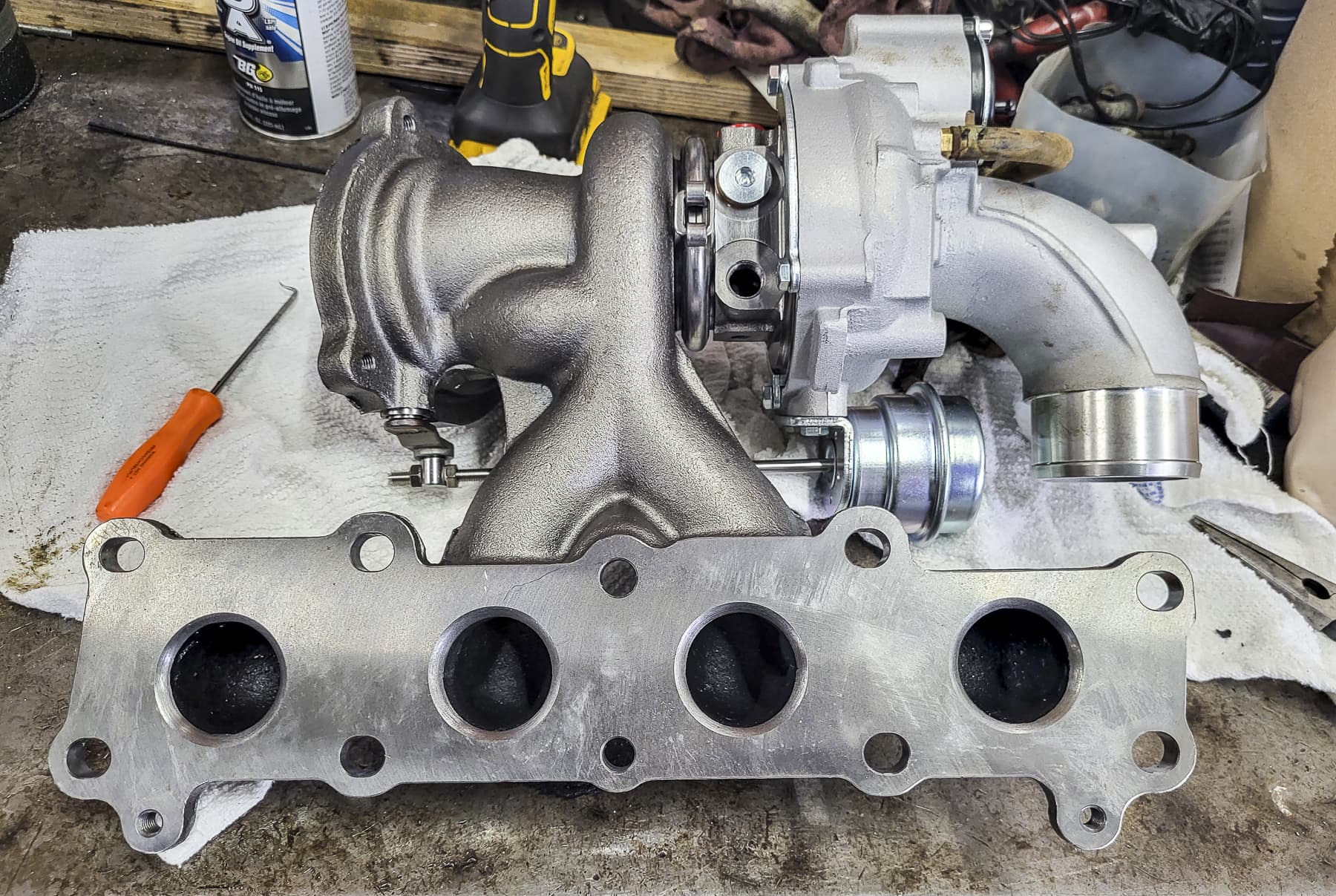 So this is the new, brand new cast manifold turbo charger replacement, all one solid piece. Definitely a more reliable design. So this is a replacement unit. And cheaper than buying it from Land Rover too. So much better overall.

There's a view kinda looking from where we would bolt the manifold up. Again that cracked section in the picture is over here on the left. You can see it's kind of all cast as one piece. 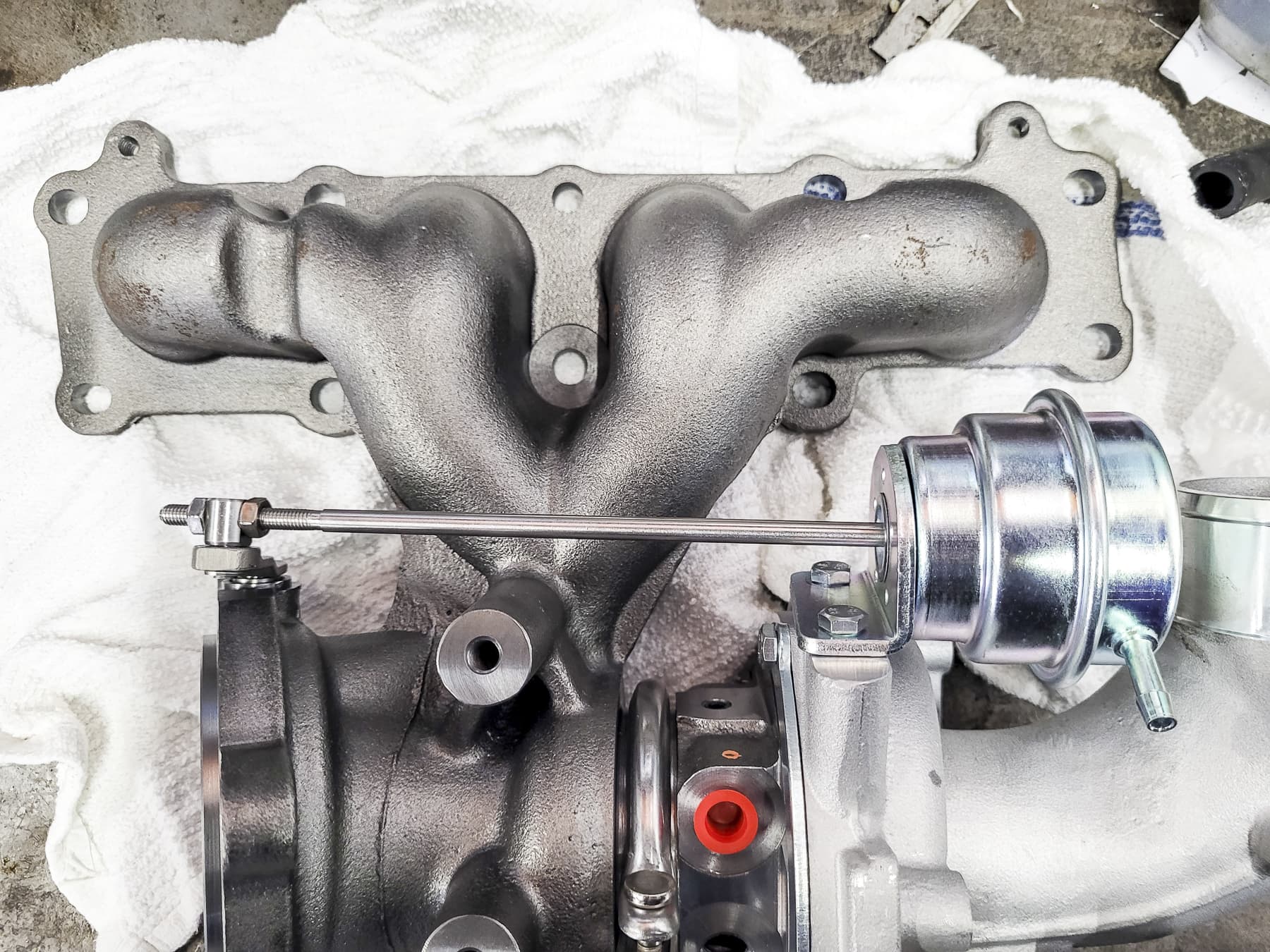 Mark: So you just do it on one side. This isn't happening on both sides of the engine.

Bernie: No. This is a four cylinder engine. It's not a V8 twin turbo. It's an LR2. It's a little small car. So it has a good, highly efficient engine. I can't remember what the size of it. It's two litre, 2.3 anyways. It's yeah, one side.

Mark: So, the upgraded part Land Rover. Doesn't do a great job on the original thing. But if it's just a 2014, you got seven years out of it. How often are you seeing this kind of repair?

Bernie: Well, interestingly in the same week we did this one. We also had a 2017 that had a turbo. This one actually had a turbo charger problem. But while we were diagnosing it, we found that the manifold was cracked also, in the same area. And the newer one, the 2017, there's a slight design difference in the turbo, but the same basic welded steel pipe system used on that one. So we replaced it with a unit like this. So that's two in a week.

It's interesting the way things work in our shop, because we do work in a variety of cars, you know, sometimes we see the same problem three or four times in a month, and then we don't see it again for six months. It's kinda interesting how things come in waves, but it's definitely a common problem.

Mark: So another LR2 issue, and we've done quite a few videos on this. How's the reliability of these vehicles?

Bernie: Well, there's a lot that goes wrong with them. I mean, this is again, another item to add to our list of things that you could expect to replace at some point in time. We have clients who love them and they spend the money to keep them going, because it is kind of a nice little luxurious, compact SUV, but yeah, there's a lot of things that go wrong. Differentials and fuel pressure issues, you know, there's a few things.

What can I say? You know, it's a nice vehicle and you'll spend more money than you would on a Toyota. If you look at all our videos, that's kind of the Bernie Pawlik takeaway.

Mark: If you're looking for service or repairs for your Land Rover in Vancouver, the guys to see your Pawlik Automotive, you can see around somewhere. There's how to connect with us, either in our comments or on Google My Business. And we appreciate you watching. Thank you, Bernie.