Mark: Hi, it's Mark from Remarkable Speaking. I'm here with Bernie Pawlik, Pawlik Automotive in Vancouver, BC, Canada. And of course they're 24 time winners of best auto repair in Vancouver as voted by their customers and we're talking cars. How you doing Bernie?

Mark: So today's victim is a 2014 Mazda CX9. This is a kind of a rare car I think in a way, power window repair. What was going on with this Mazda?

Bernie: Yeah, the driver's power window was doing some weird stuff. We do work on a number these, they're not super common. They're really nice vehicle for sure. It's kinda like a SUV station wagon. When you look at the picture of the vehicle, it does really look kinda like a station wagon. That's just a little expanded. It's a good looking station wagon. Since a lot of 'em never used to be. Anyways.

Bernie: Yeah, so the customer's concern was when you put the driver's window down and then go back up, it wouldn't move up properly. Sometimes you get it up, but it would go, you could hear this like loud noise coming from the window. So that's basically why the vehicle came in.

Mark: So, how do you go about determining what's causing that?

Bernie: Well with power window issues, of course, there's a number of things that can cause problems. But the first thing we were able to eliminate is it's not a switch or main electrical problem. Like the switch is working, the power is getting to the motor. There's just a mechanical problem going on in the window. So the next step is to basically remove the door panel and determine which component is broken and the way windows work there's really gonna be one of a couple of items.

Normally how it works is there's a power window motor. If you don't have power windows, if you have a hand cranked, then you're the motor. But what that motor does is it drives a mechanism it's called a window regulator and there's a couple of different designs. One of 'em sort of the old traditional style that was used for many years. It's not common anymore. It's a big metal arm that pivots in the motor, there's little tiny gear in the motor, which runs along a big gear on the arm.

This one uses the more modern design, this Mazda, which is basically, how, how do I best describe it? It uses a bunch of little wire cables, kinda like you find like bicycle cables but more robust, wrapped around pulleys, plastic pulleys. And it rotates and that moves the window in a track, moves the window up and down. So that's kind of the more modern design those do fail, you know fairly frequently or motors will fail. So anyways, it was a matter of pulling things apart and looking at it and determining what it was. So that was the next step in the process.

Mark: Do we have some pictures?

Bernie: Yep, we do. So there is the vehicle, again that station wagon look. I think these are actually, you know, this 2014 design is actually a little more squishy is why you say it looks like a station wagon, cuz the earlier models of these actually look more like SUVs, they're a little taller. Anyways, that's the vehicle? 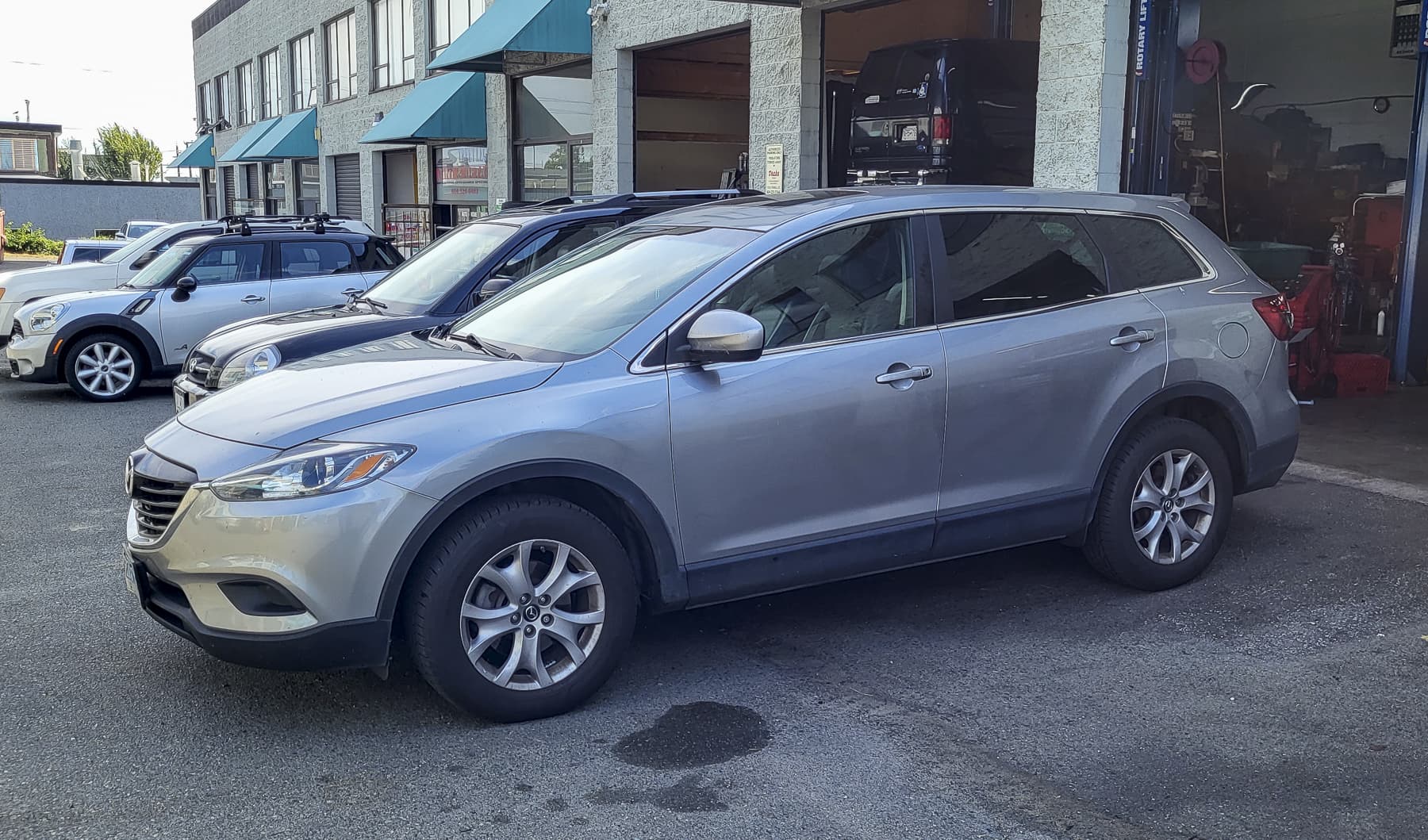 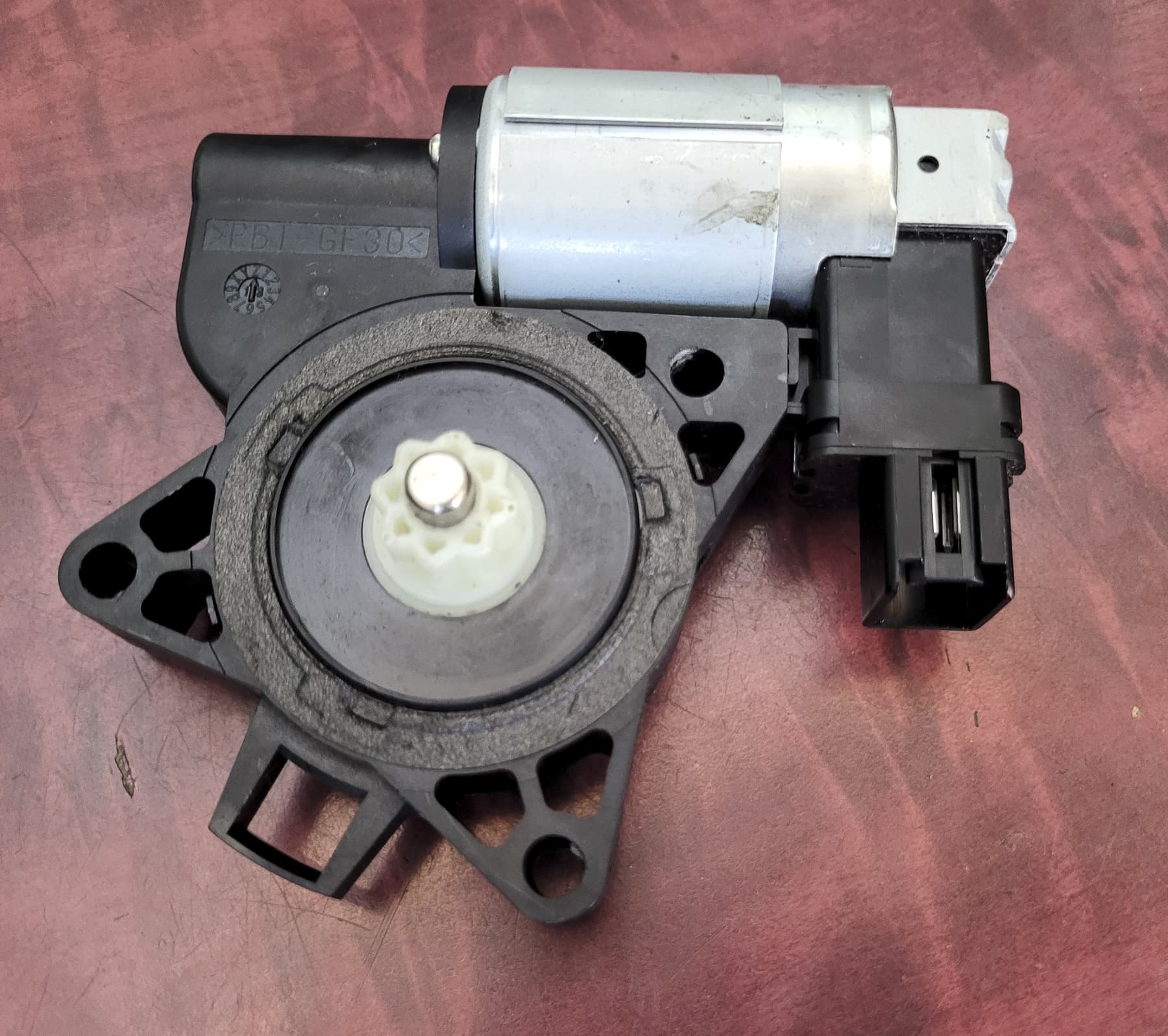 So that kind of determined that part was good. The motor, I actually hooked up to power and I was able to operate the motor. And as soon as I went to operate it, I could hear it do its strange little noises, the BR noises, as I described them. And so there's basically a gear or something that's broken inside this.

I mean, everything looks fine externally, but I was able to, you know, with my hand, grab this piece, move it back and forth and you could feel it actually, there was extra excess play in it. Whereas on the new motor, there was no play whatsoever. This is a complete sealed unit. 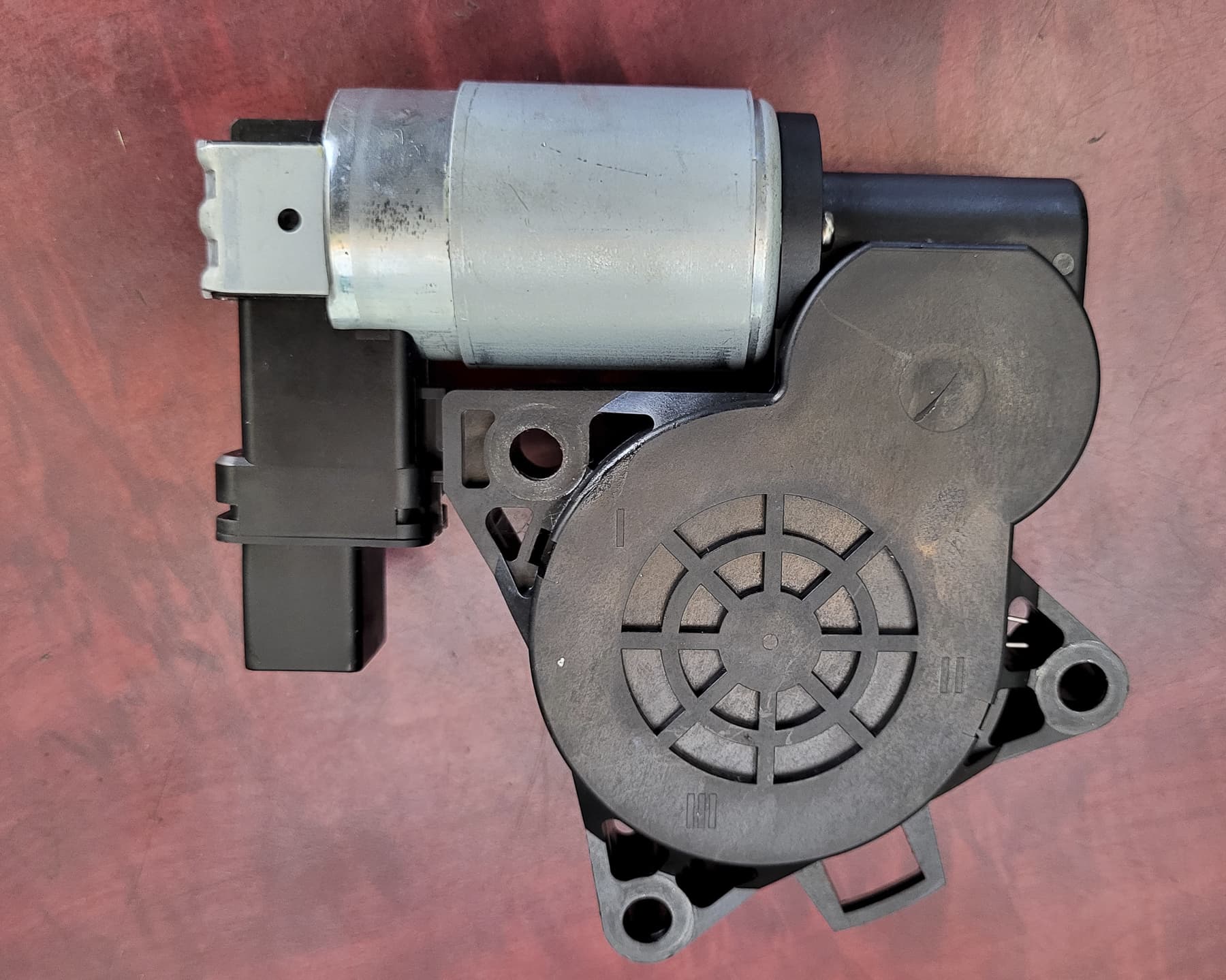 This is kind the backside here. As you can see, it's all a sealed plastic unit. But if I was to break it open I'd probably find that what we would find here. This is the electric motor here. There'll be like a, is it a worm gear? On a shaft driving, I believe a gear here, driving another gear here. That's what it looks like. So somewhere along the line here, there's a gear with some stripped teeth and that's what was basically causing the issue. So, you know, not repairable like the olden days where you could actually buy rebuilt motors. These basically, you replace them when they wear out. So that's the picture show.

Mark: So you mentioned there's a couple things, which of the two parts, the cables or the motor, which fails more frequently?

Bernie: You know, it's kind of a 50/50 thing. And I'm just talking about cars in general, that the regulators fail versus the motors. It's sort of half and half that that's kind of what we find. And when I was thinking about just started to talk initially, I realized, you know, I almost could have diagnosed it as being a motor issue and not a cable issue. Of course you have to see it to test it.

But you know, when I think about it, usually when those cables and those regulators fail, a lot of times the motor will go up, the window will kind of bind in a halfway position, not sort of making us sound like a broken gear. But it could have been that the gear was broken in the regulator or not in the motor, but fortunately was pretty simple to diagnose and simple to repair as well.

These vehicles have an inner door panel. This is a design that a lot of vehicles have nowadays where it used to be that you'd pull the outer door panel off and everything would be kind of visible through holes in the sheet metal. Well, nowadays what they do is they put this panel that bolts on to the sheet metal. And all the window mechanisms are on the inside. So getting the regulator out is a lot more work than it is to change the motor. So the motor was actually bolted off the outside. So it actually made for fortunately for the customer, it actually made for a simpler job than it, than it would've been if it was a regulator.

Mark: So after you placed the motor, all was well?

Bernie: Yeah, worked perfectly. Put all back together and worked like new and probably good for another eight years or more.

Mark: And how are Mazda CX9s for reliability?

Bernie: I think they're quite good vehicles. They're not the most common, but we work at a few of them and they generally are pretty good. I think the earlier models, you only had a few problems. We've done a couple podcasts on some things, so if you look at our archives, you can try to see some history, but they they've got their issues, but generally they're pretty good vehicles.

I like them. They nice driving vehicles generally. Well priced compared to their competitors.

Bernie: It's a V6. Yep. I don't believe they come in a four cylinder. They have different trim levels, you know, and the fanciest trim level is pretty nice. It's a well built, well put together vehicle. I like Mazda's overall. I think they're good. They're less expensive than Toyota and not quite as well built, but innovative in their own way. And they're good vehicles overall, pretty reliable. Probably a few more repairs than Toyotas over the long haul of a 20 year span. But, there you go.

Mark: There you go. If you're looking for service for your Mazda in Vancouver, BC, Canada, the guys to see your Pawlik Automotive. You can reach them on their website, pawlikautomotive.com to book, or you can call and book (604) 327-7112. They're busy. You gotta book ahead. And thank you so much for watching and listening. We really appreciate it. Thank you, Bernie.