Mark: So we have another, a reprise, a 2014 Mercedes E63 AMG that had another issue. What was going on with this car?

Bernie: Yeah. So this is a tagging along to the last podcast we did on the E63. And we found another issue with this vehicle I didn't talk about, but I thought this deserves some attention. It's a repair job that we will be incorporating as a maintenance item and all our future Mercedes services. Maybe not every service, but at a certain time interval. And that is replacing the camshaft position sensors at least inspecting them for oil leaks.

Mark: So what was the presenting issue? Why did you feel like that needed to be replaced?

Bernie: So while we were doing the repair on this E63, we took the engine out to do the valve cover gaskets. We removed the camshaft position sensors from the valve cover, which is part of the job and noticed there was oil inside the connector. And so what happens is there's four sensors. They tend to leak oil out of the sensor. You know, they're immersed in the engine oil, they leak oil out of the sensor, into the connector pins. And that works its way through the wiring harness.

Now, eventually that works its way through a number of different wires, damaging other components. And eventually the PCM, the powertrain control module gets oil in it and damages that, and that you know, as you can imagine, that the cost of that is crazy.

To do that properly, it's a new wiring harness. It's the cam sensors, which are cheap, a wiring harness, possibly some other components and a new engine computer, which is, I don't even know what it costs for this car.

Bernie: It could be, you know, five, $10,000 plus programming. Plus it probably may have to be programmed by Mercedes because they have security protocols where they won't let anyone else other than themselves do the work. So that's a maybe thing on that, but anyways, it's a scenario you don't want. So I thought. So many good issue to do as a maintenance item.

We did actually replace the cam sensors for this customer. We cleaned the wiring harness, but you know, the oil had made its way down to some other components, possibly even to the PCM. Although there wasn't a lot of evidence there of oil, but one of the oxygen sensors quite a bit down in the engine, you can see oil on that connector to that it worked its way through.

So let's have a look at some pictures. 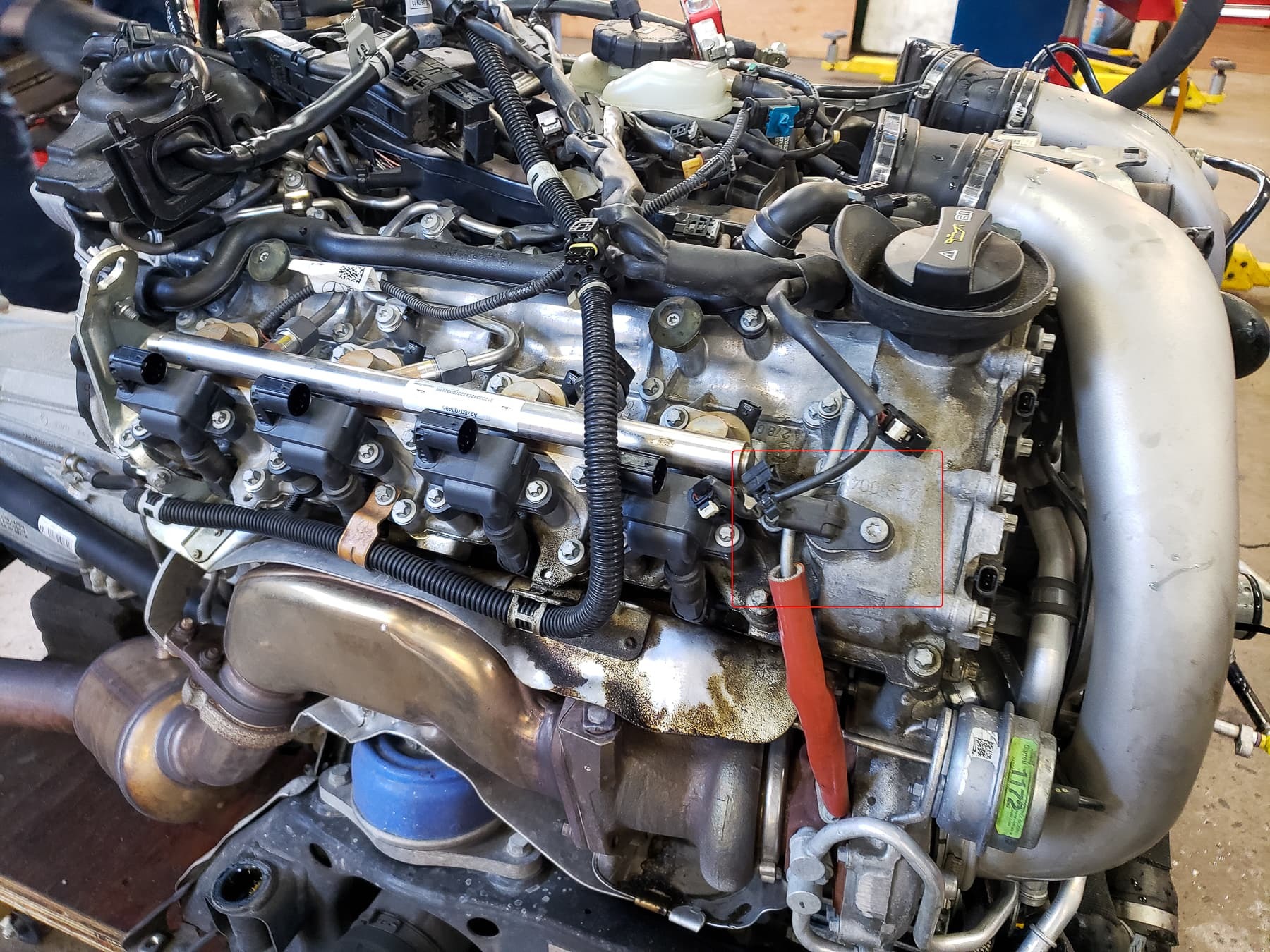 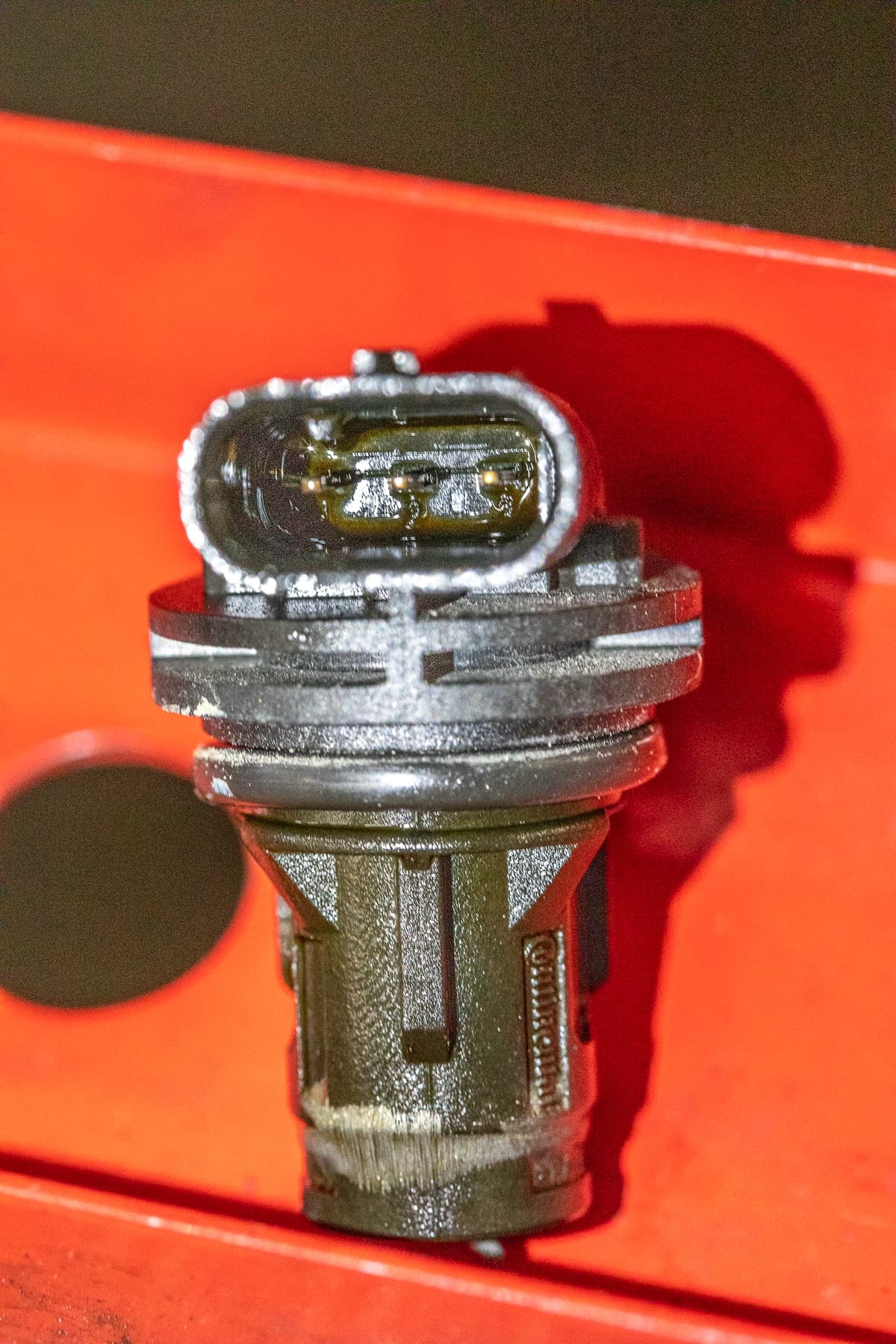 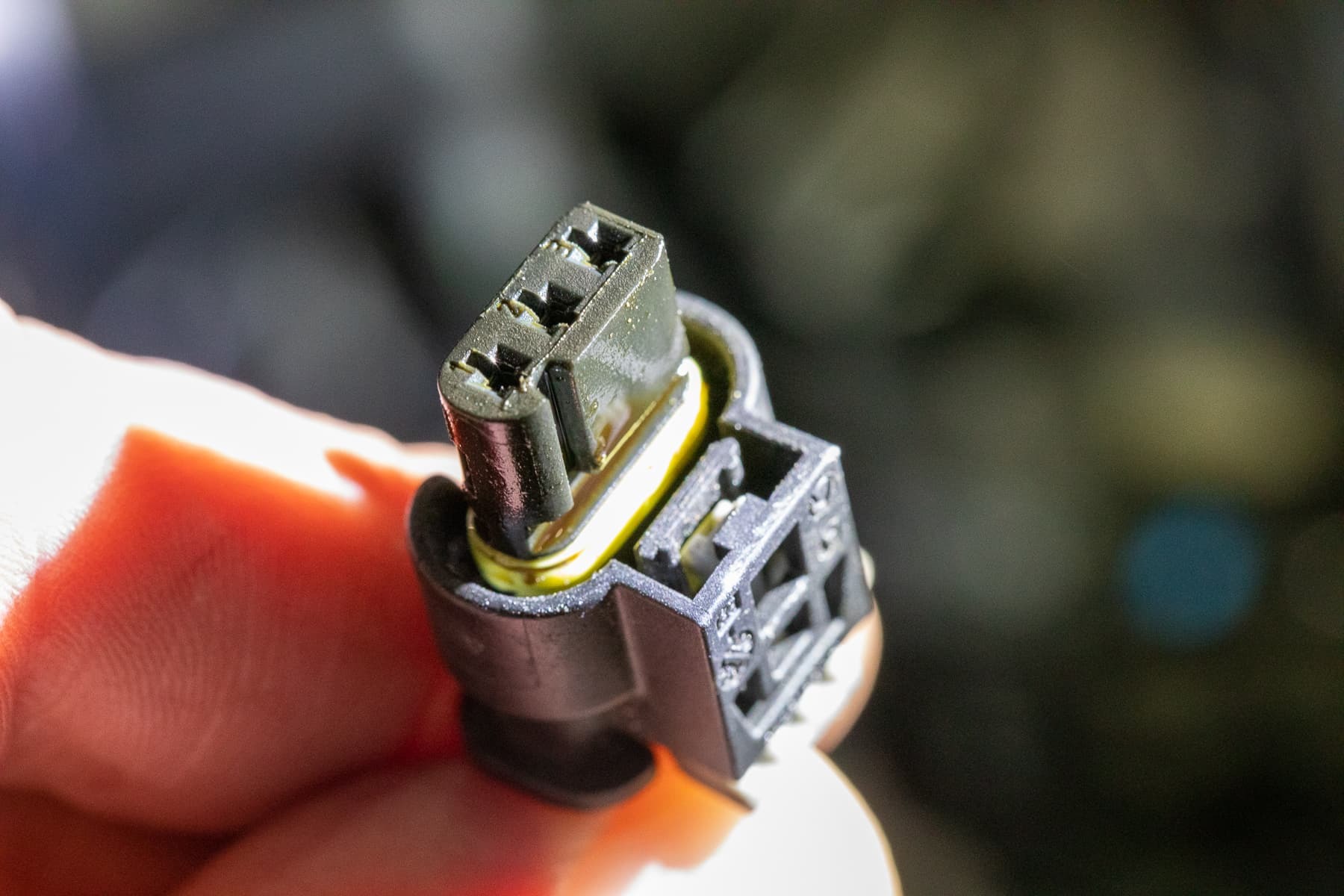 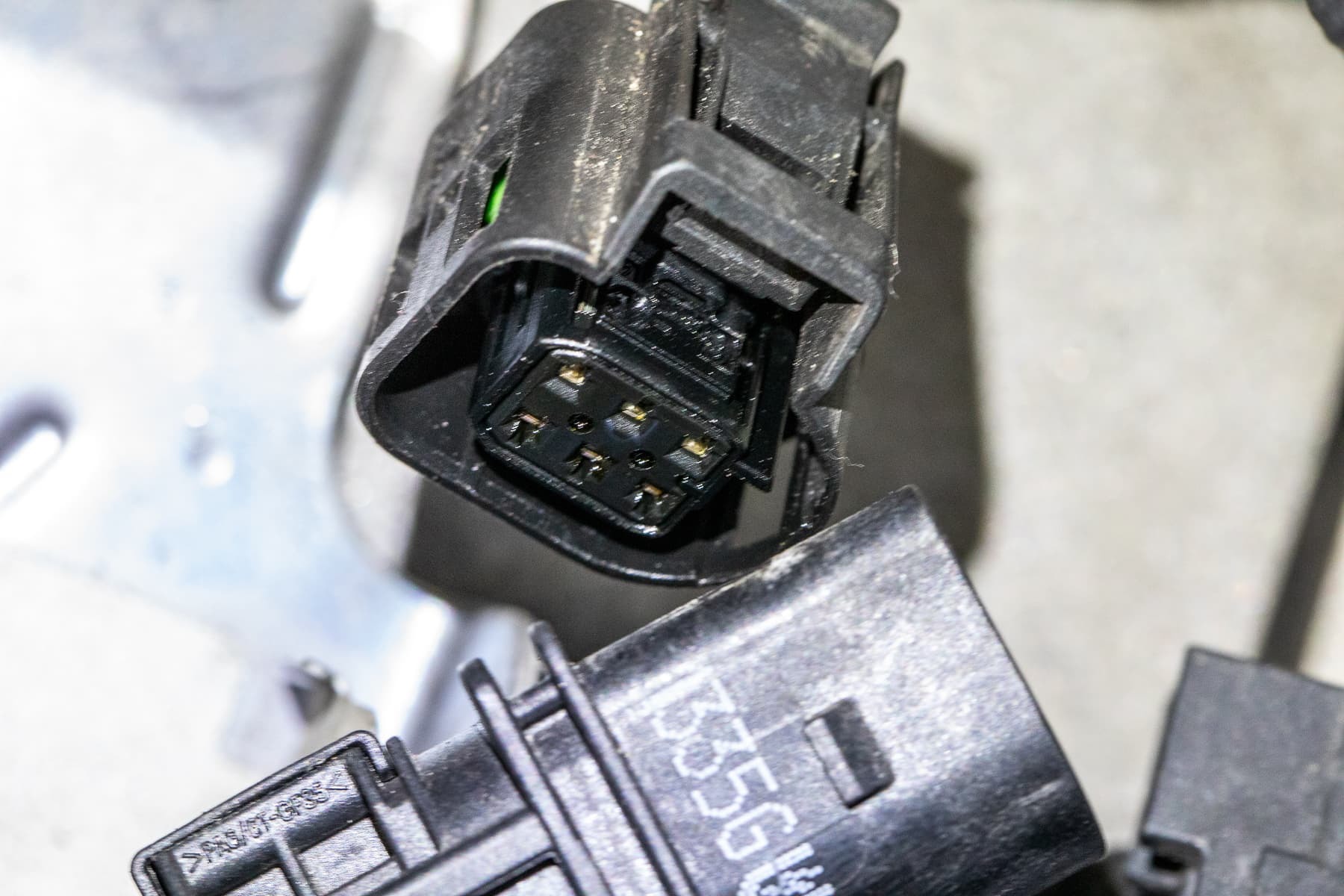 So this is our engine again. I showed this picture in the last podcast. However this one here, I just kinda did a little square around. This is  the cam sensor right here. There's an electrical connector. There's four of these. So there's one back in behind this oil filler cap. And then there's two on the other side, it's a V engine. So I've just kind of taken all my photos of the right engine bank here, but that's, that's the sensor there.

And we'll just look at a couple of other views. Here's the connector itself. You can see oil, this is like a rubber weather pack seal. But as you know, as the oil comes out, of course it goes down here. It goes down into the wires, works its way through the installation.

This is the oxygen sensor connector. I apologize not the sharpest photo, but you can see an oiliness to this plug. This should be bone dry. And so this is a connector. This is way down. This is actually on top of the transmission. So oil has worked its way down to this area.

Once oil gets down into the oxygen sensor, it will damage it. The owner didn't want to replace it at this time, but we did the cam sensors and cleaned up the oil at the top of the engine.

Mark: So this is a really serious, almost catastrophic failure?

Bernie: Yup. And it happens and you know, there's people around who've had to deal with it. We've seen it on other Mercedes models. I'm even thinking back like a, had a customer with an 01 SLK 230 and that had a leaking, it may have been actually a camshaft actuator, but again, it was leaking oil into the wiring harness and caused the oxygen sensors to go bad.

So, you know, this is a thing on a number of Mercedes. And so I think, you know, going forward, we're going to incorporate this as a maintenance service. It's not too difficult when we're doing say a B service and we've got the engine cover off to actually just pop the connectors, have a look, is there any oil in there? If there is change the sensors right away to prevent any further damage?

Bernie: Exactly. Now, interestingly enough, in hindsight, it would have probably would have been good 10,000 kilometres ago to replace these sensors. So again, this might be something we look at with the idea of that being a maintenance item, to just change the cam sensors maybe every 70 to 80,000 kilometres, you know just do it and then it's done and you don't have to worry about it causing any other damage. Because the cost is, you know, it's probably a $10,000 plus repair if it goes really bad. You know, if it gets left long enough and you won't really know until eventually it starts running crappy and things start happening. And you might get lucky, you might be able to clean some stuff up and away you go, but if it gets into the PCM you know, it's all over.

Mark: So why isn't this a suggested maintenance item from. Mercedes?

Bernie: Oh, because it's a defect, you know, that otherwise they'd have to admit, Hey, we put crappy cam sensors in and they would obviously make them better if they could in the first place. So, you know, this is out of the warranty kind of repair. I mean, usually the warranties, you know, five years max. So it's beyond the scope of that kind of thing. So anything beyond that, they're not really too concerned about. I mean, it does kind of affect our reputation in a way, if a lot of things happen after warranty, but you know, it's not really a big concern of theirs.

Yeah, it's basically not a prescribed item, like an oil change or a filter that gets dirty. If they knew they'd probably improve the sensors. And this isn't entirely a Mercedes, I mean, it seems to be more common on Mercedes than any other vehicle, but there are other vehicles where, you know, oil will intrude, through a component and get into the wiring harness. So it's not a good thing, but it seems to me like Mercedes is the big one, the big culprit.

Mark: If you're looking for service for your Mercedes, expert service for your Mercedes AMG or not in Vancouver, people to call are Pawlik Automotive. You can reach them at (604) 327-7112 to book your appointment. You have to call and book ahead, they're busy. They're always busy. They're very good at what they do. Check out the website pawlikautomotive.com. Hundreds of videos on there all makes and models and types of repairs. Same thing on YouTube Pawlik Auto Repair. Check it out. And thank you so much for watching and listening. We really appreciate it. Thank you, Bernie.