Mark: Hi, it's Mark from Top Local. I'm here with Bernie Pawlik, Pawlik Automotive in Vancouver, BC, Canada. Vancouver's best auto service experience and 23, 23 time winners of best auto repair in Vancouver as voted by their customers. How are you doing Bernie?

Mark: So today's victim is a 2014 AMG Mercedes E63, what was going on with this vehicle?

Mark: So what brought this hot rod into your shop?

Bernie: Well, besides the A service the owner had complained that sometimes it felt like the engine had a bit of a misfire and we noticed, well we road tested it and came back into the shop, you could smell oil burning off the engine, and you could see a bit of smoke puffing out here and there under the hood, which wasn't a good sign.

Took a look at it. It was pretty apparent that valve cover gaskets were leaking and they leak right on top of the exhaust manifold slash turbocharger. The turbochargers, it's a twin turbo engine. The turbos are tucked right in nice and compactly in right underneath the cover area.

Mark: So where was the oil leaking from?

Mark: So how do you go about repairing that?

Bernie: Well, actually there's a couple of ways, so it can be done in car, but we chose to actually drop the engine assembly out of the car. It's really hard to access a lot of the bolts and to cleanly remove the valve cover. And we felt like, there's a little bit of extra time, but much more worthwhile way to do a proper repair to just to drop the engine and then work on it. So I'll just get into some pictures here.

Mark: And these cars are built to actually do that right.

Bernie: They are and we're finding that more and more that you know, cars,  removing engines and transmission assemblies is not really that difficult. This is an all wheel drive car too. And really not that time-consuming, I mean, it's a few hours to get it out and get it back in. But once you do it, then doing the work as much simpler than doing it in the car and much less difficult on the technician too. Because you get to stand and work on the engine as opposed to... be hunched over. Yeah be hunched over. 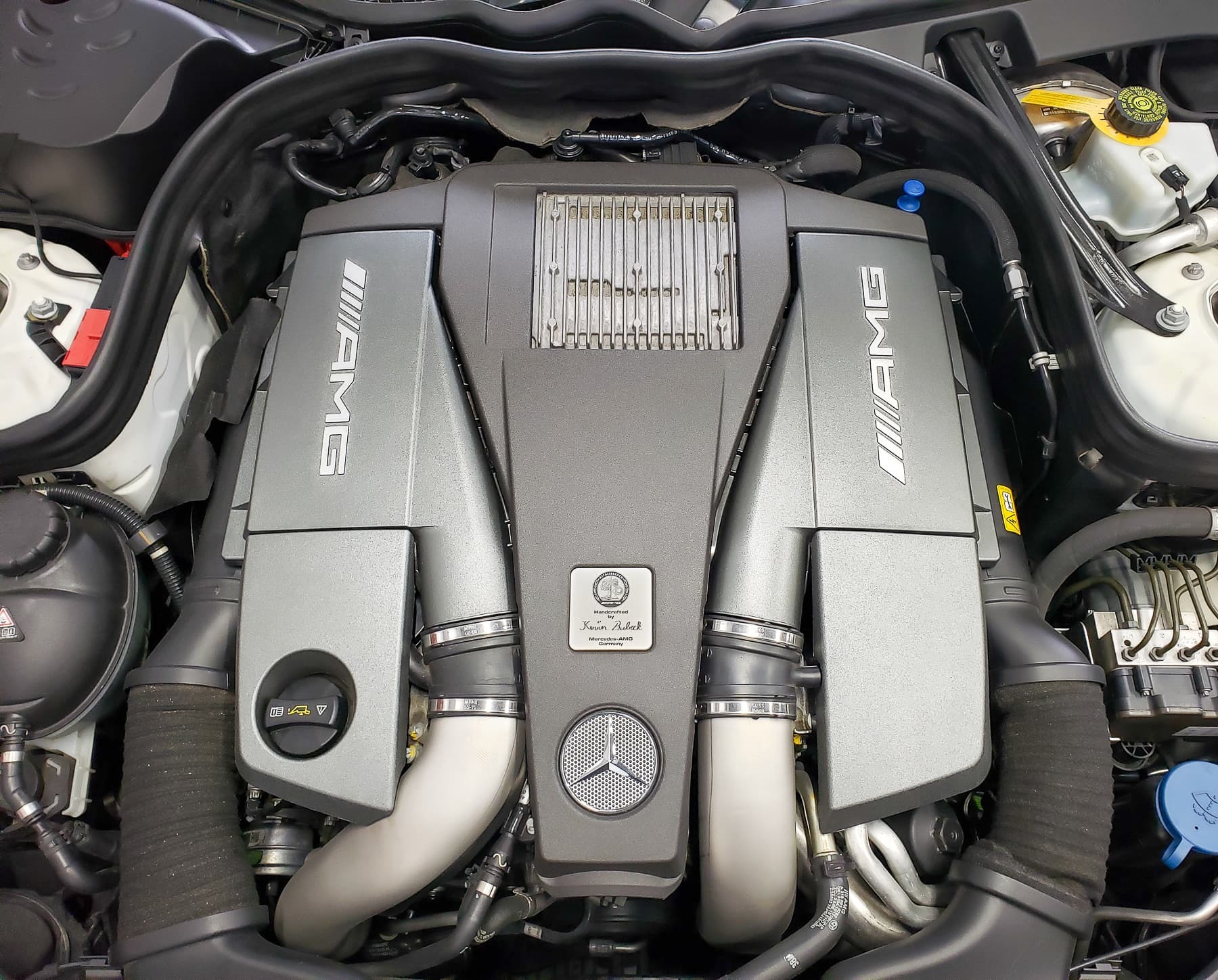 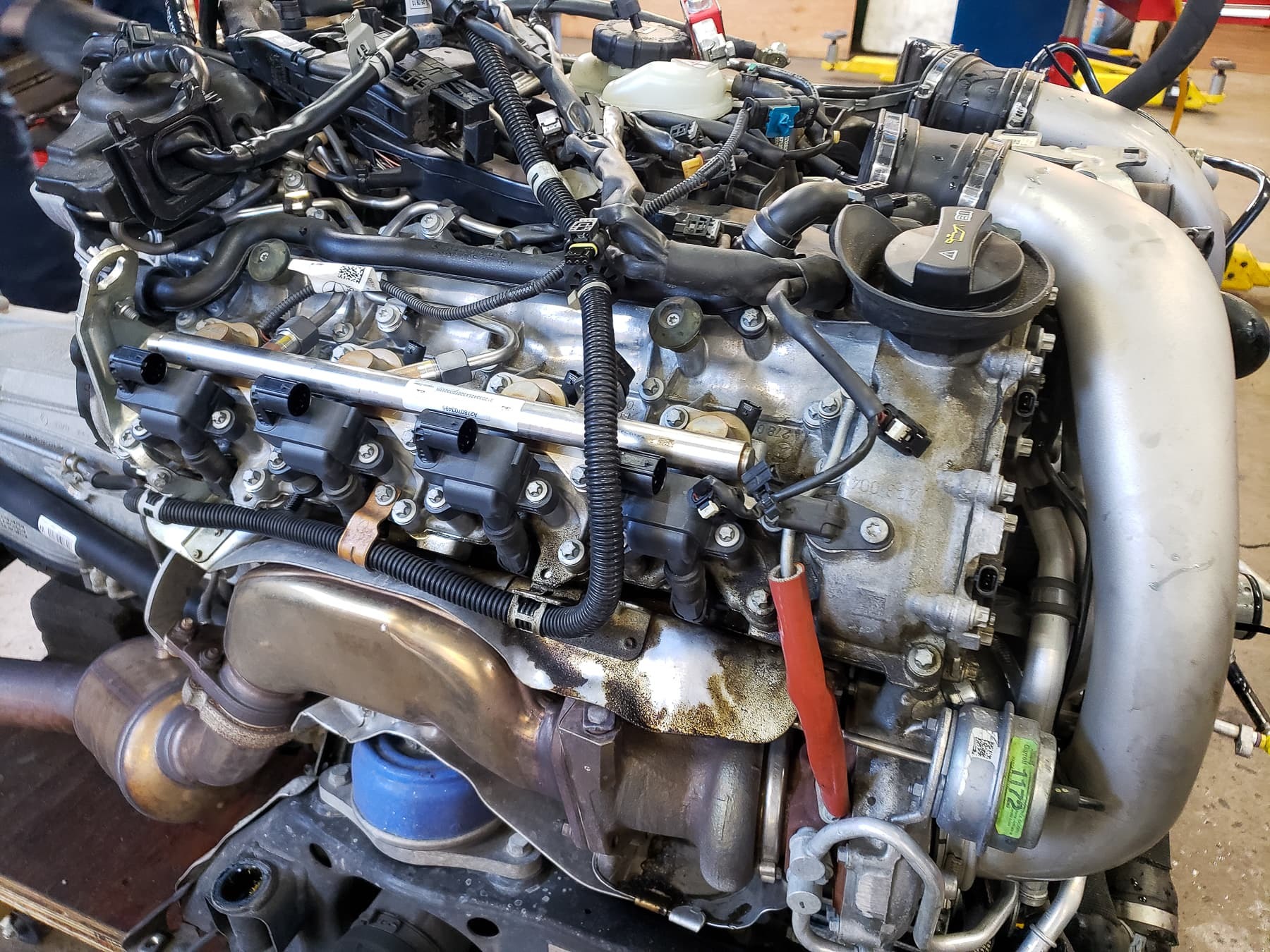 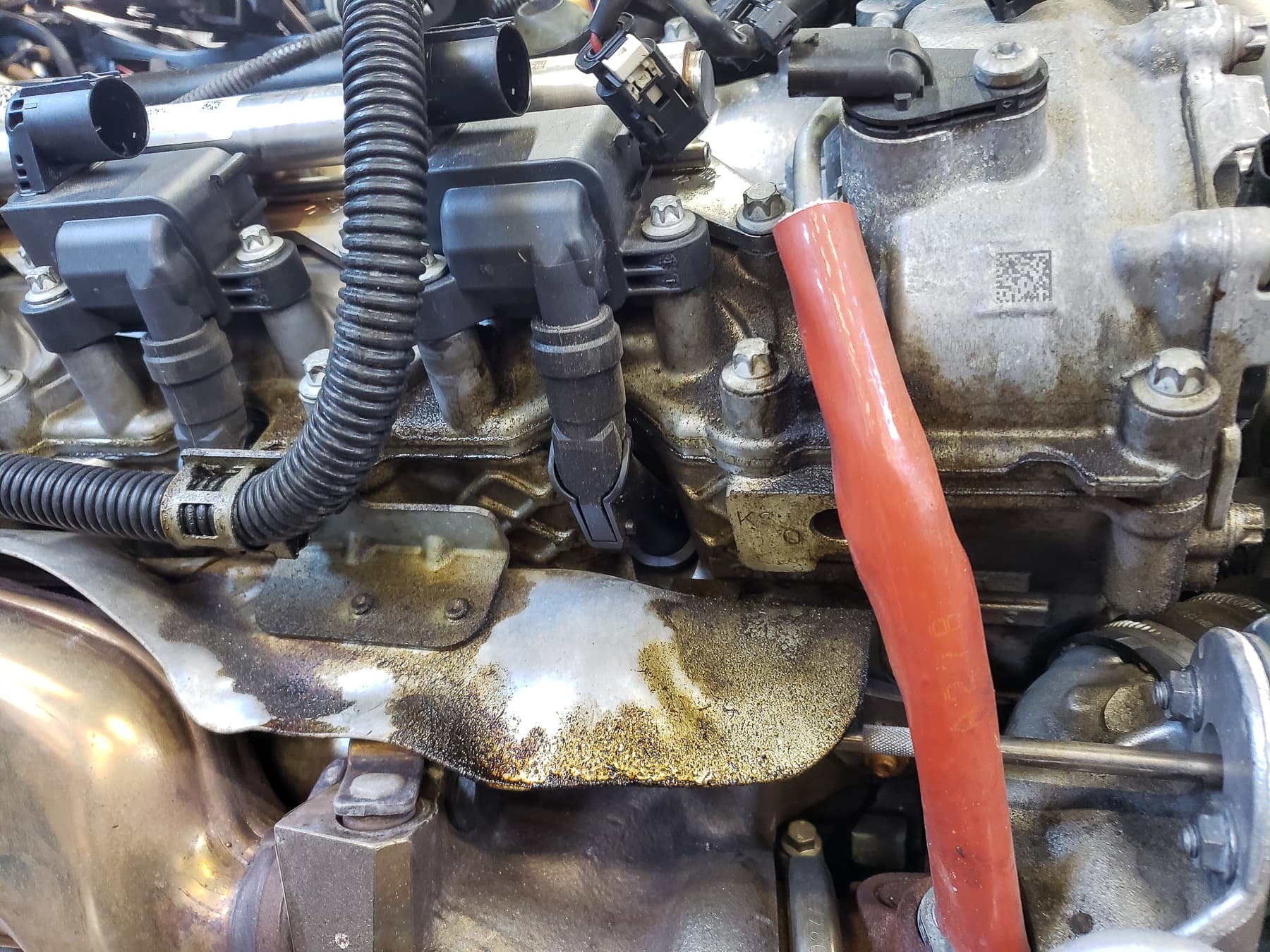 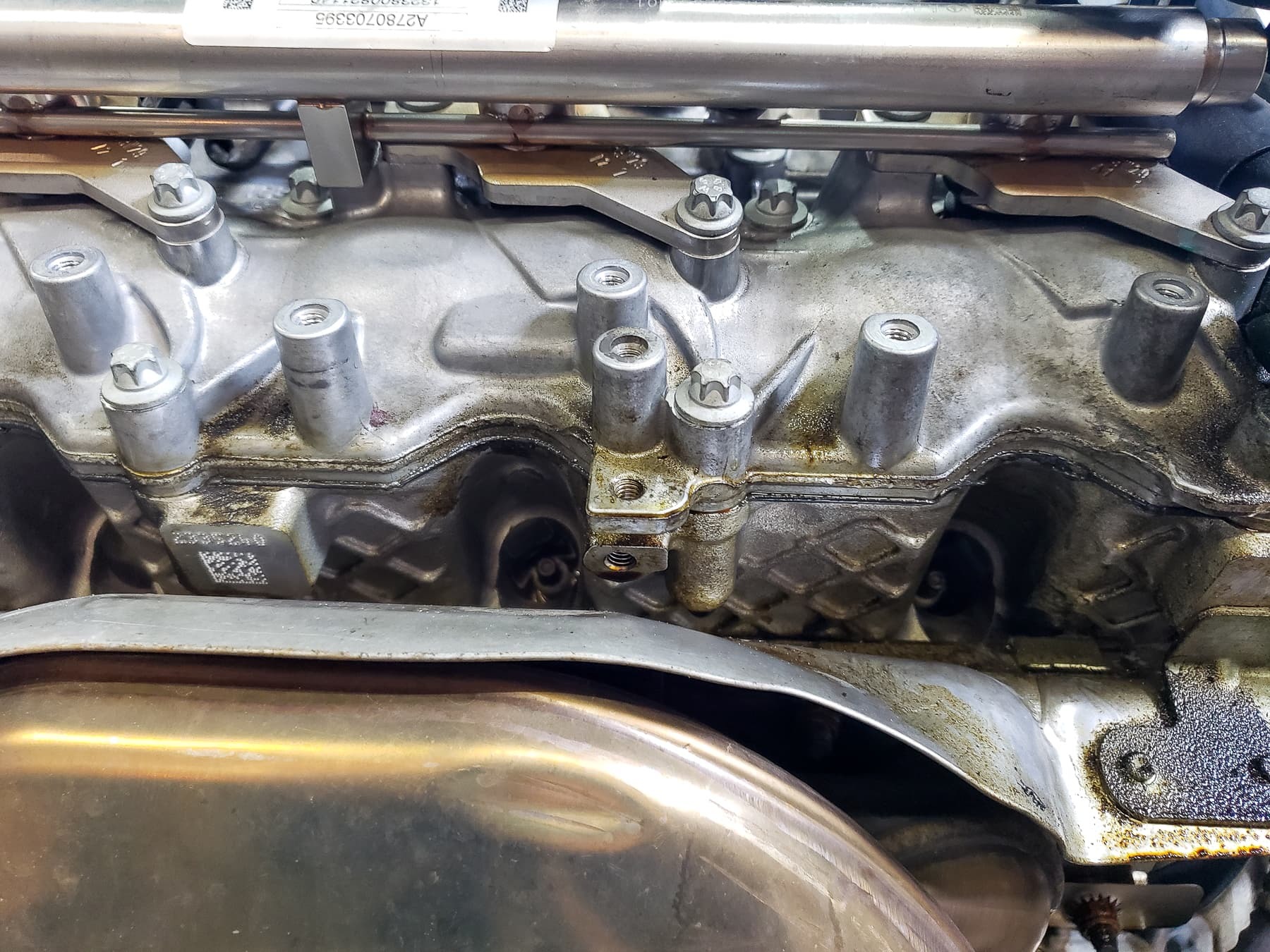 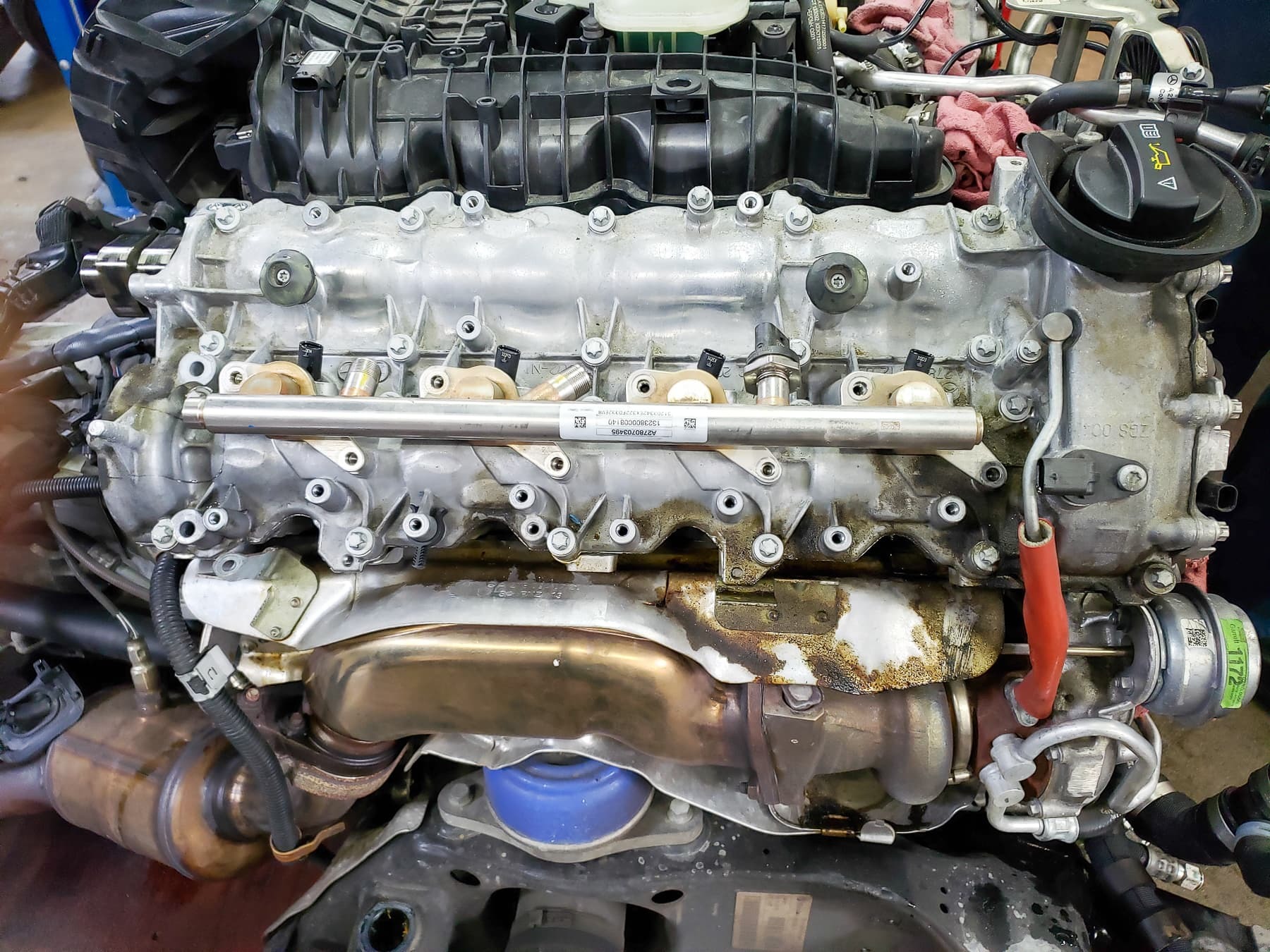 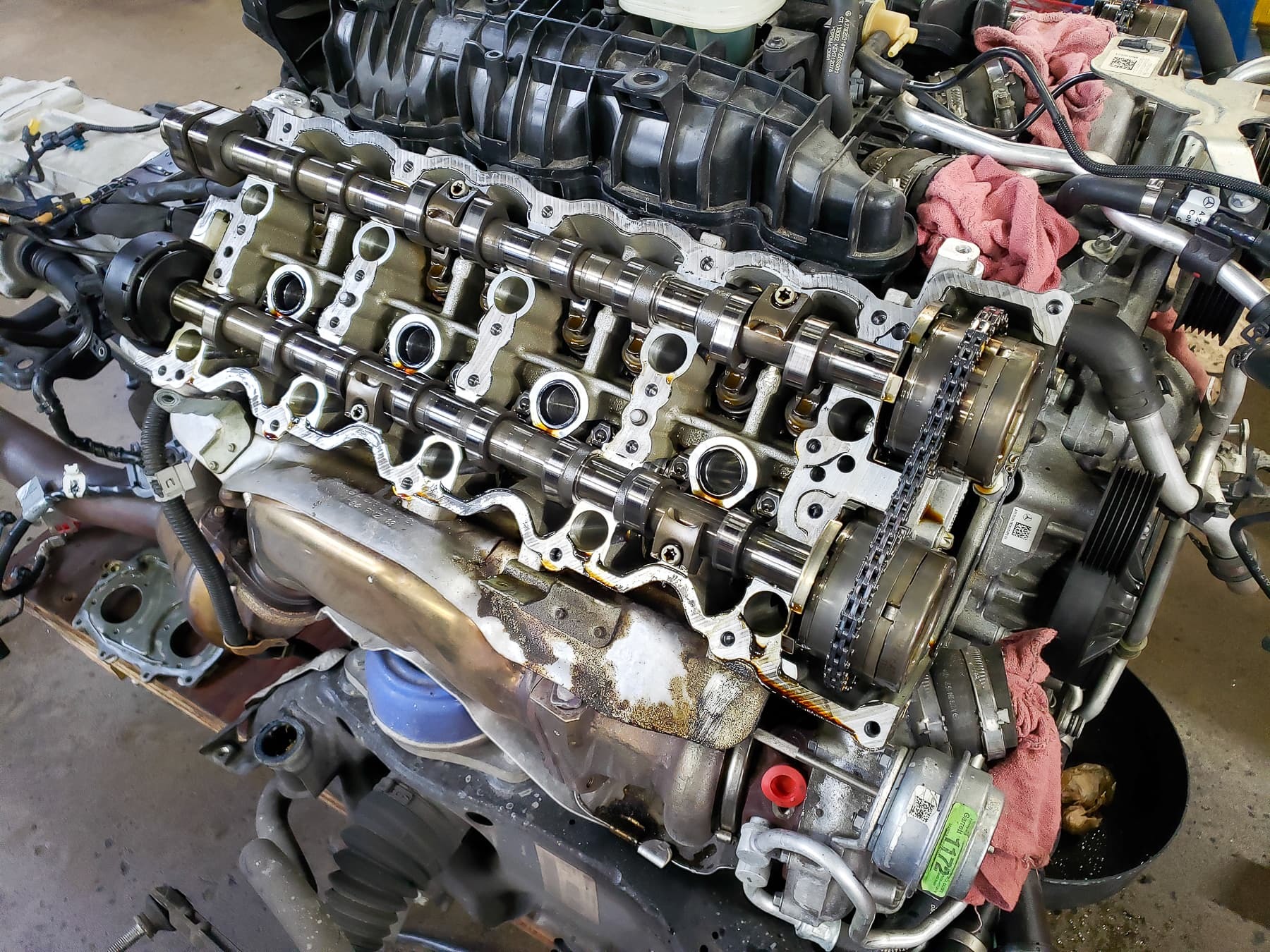 Here's a view of the engine. This is before disassembly. I took these photos when this service was just a maintenance repair. So you can see again, this isn't the first E63 or engine we've looked at, but it's a beautiful looking engine I have to say. They've done a nice job for most of these Mercedes AMGs making them good looking engine.

There's our engine out of the vehicle. The vehicle sits above us out of view. And basically you've got your valve cover here. You can see some oil stainage here. There's the turbocharger right there. Oil leaking, right from where my mouse pointer is straight down, dripping off this. Of course it's got a tray here, but it does drip off and eventually hits the turbocharger.

Mark: And the turbocharger is red, like literally molten, almost molten metal temperature.

Bernie:  They can get that way for sure. Absolutely. They get super hot and you know, oil leaks never used to be a big deal on cars a long time ago. But now with crammed engine compartments and the amount of heat going on, an oily can be a fire hazard. It's  not like in the olden days. Oh, well this is an oil leaking. I remember when, you know, in younger years, I mean, a car would never catch on fire from an oil leak. It never happened.

But you know, nowadays this kind of thing can happen, especially if oil is sprayed under any sort of pressure. I mean, at this point it's just a seep, but this again, you can see a closer view here, kind of wet right in that area. Another closer view with items removed and you can actually see the oil sitting right in there and running down there. So, I mean, at the very least it doesn't smell that good for nice hot rod engine and the smoke coming out of the hood is a little disconcerting. Again, there's a view with the wiring harnesses and the ignition coils removed. You can kind of see a better picture of the top of the engine.

And our final last picture. This is what the valve cover off. So you can kind of see the inner workings, the two camshafts, these cam lobes here drive the high pressure fuel pump. And there's one on each side of the back of the engine. So that adds a bit of extra strain onto this cam shaft. You can see the timing chain here, not as impressive as the older series of Mercedes, where they had double roller chains. These guys have gone to the skinny, single row chain design, kind of like land rovers that are a failure item.

And so far, we haven't seen a lot of problems with these, but I would say that they are certain to fail much sooner than the earlier style of Mercedes engines with the double roller chains. Less moving mass, I guess, is why they do it. And this one does look a little beefier than the Land Rover chain, but not a lot. And you consider this is a 500 plus horsepower engine. I don't even know the exact specs, but it's way up there. So there's our picture show.

Mark: So that engine sitting on a, basically a subframe, that you on both that. And once you've unhooked the engine from everything, it just drops out of the vehicle.

Bernie: Yeah. Well, we don't like to drop it out. That would be kind of get a mattress underneath and bounce it off. Yeah. You can do that thick, spongy, a trampoline or something, but yeah, so basically we just have a rolling bench that we put underneath and set everything in place. And then we actually leave it, that stays in place and the car body just goes up right above it. It's pretty cool. And you got like a nice built in engine stand and room to move. And you know, as I said, this can be done in the car and it's, there's a lot of room for making mistakes.

I'll just actually get right back into this picture again here because I've got it up. But  this gasket here, everything needs to be scraped away all around the edge of this gasket. All old silicone needs to be removed. And then, you know, really the tricky part is putting it back down if there's anything in the way. And there often is when you do it in the car. Cause you're trying to push wiring harnesses out of the way and vacuum hoses or whatever bits and pieces. And you tend to have to fight with that kind of stuff. And sometimes when you do, you might, you know, the valve cover, won't go cleanly on, you might smudge the silicone and then the thing leaks. It's not quite as good of a job as you can do when you have everything off.

Mark: So good quality control is quite a bit higher than when you do it this way.

Bernie: Way better for sure. And honestly, you know, we don't want to do this job as a warranty job. But for the customer, we want to make sure that the car, this car is what, seven years old, you know, seven years from now, maybe that's when the gas gets starts to leak again or maybe not.

Mark: Yeah, so job all done. Everything's backing the vehicle. How'd the vehicle run after repair?

Bernie: Yeah, it was good. We actually had a chance to look at the spark plugs and the ignition coils and things while we had everything off. The spark plugs had been replaced. Remember, I did mention there was a concern of a bit of an engine misfire, but we never found anything obvious wrong. It ran fine afterwards. I mean, something that may need some diagnostic down the road and this vehicle has had some custom tuning done to it. So that can always affect how things run, shouldn't make it misfire, but there can be some interesting issues that occur from that.

Mark: And what kind of mileage was on this car?

Bernie: About 85,000 I think. Somewhere in the 80,000 kilometre range. So not a huge amount, still pretty young and kind of disappointing to have a valve cover leak this magnitude at this age. I mean, that wouldn't have been a 1972 Chevy V8 that probably, would've had four valve cover gaskets by now, but you know, on an engine of this caliber, with that kind of sealing technology, it is a little disappointing considering we see some cars, you know, a variety of different vehicles with two or 300,000 K's, don't have a drip of oil coming out. It's kind of disappointing.

Mark: Is that a bit of a function of the fact that it's such a high horsepower, kind of, it is a hot rod, basically custom style engine.

Bernie: Well, I think that could be part of it. I mean, you know, the heat under the hood has got to be tremendous, especially in that valve cover area, because you've got those turbochargers sitting underneath, even though there are heat shields, there's still gotta be a lot of heat there. So that could be definitely part of why the silicone decays quicker in that area. It probably is.

My daughter has a Jeep, it's like a four cylinder Jeep, you know, basic vehicle, couple hundred thousand K's, not a drip of oil coming out of it. I'm going, you know, that's, that's a Jeep, you know, and again, same kind of silicone technology, Toyotas, same thing, couple of two, 300 Ks, no drips, but they're not performance engines like this. So that's probably doesn't make a lot of sense.

Mark: And how are these E63 AMGs is for reliability?

Bernie: Well they're pretty good. I think these are definitely a little more problematic engines than the earlier, like say the 55 series, the supercharged engines though, you know, there's issues with these engines that are more common and prevalent than with the older models. So, and expect to have more repairs and I mean, of course it's a Mercedes, it's a high tech high, highly complex car. So great car, just a thrill to drive. But it'll cost you.

Mark: If you are looking for service for your AMG in Vancouver. The guys to see are Pawlik Automotive. You can reach them at (604) 327-7112 to book your appointment, you have to call and book ahead, they're busy. Or check out the website pawlikautomotive.com. Hundreds. Not exaggerating hundreds of videos on there. We've been doing this for nine years now. Hundreds of videos, all makes and models of cars, types of repairs. Check out the YouTube channel. Pawlik Auto Repair, same thing. Thanks for watching and listening to the podcast. We really appreciate it. And thank you Bernie.

Bernie: Thank you, Mark. And thanks for watching. Thanks for listening. It's always a pleasure.