Mark: Hi, it's Mark from TLR. I'm here with Bernie Pawlik, Pawlik Automotive in Vancouver, 24 times voted by their customers as best auto repair in Vancouver.  And we're talking about Range Rovers today. How are you doing Bernie?

Mark: So today's victim is a 2014 Range Rover Supercharged that had an engine noise. Let me guess supercharger nose cone, timing chain?

Bernie: Nope. None of the above. This was a different noise this time.

Mark: So what was it?

Bernie: There was a tapping noise in the engine and basically like a tick tick, tick, tick, tick type of sound. So surprisingly the timing chains, weren't the cause of the noise. But we did need to do some further diagnosis to figure out what it was.

Mark: So what diagnosis and then steps towards repair did you have to take?

Bernie: Yeah so for engine noises, I mean, our favourite tool is a stethoscope. I should have actually brought it in, hung around my neck and looked like a doctor, but it's sitting down in the shop. But it's kind of different than a doctor stethoscope in that it has a big long, it was kind of like a listening piece instead of having the flat thing that the doctor puts on. This has a big, long pointed tip and it magnifies the sound. And of course we stick it up to our ears, like any stethoscope, but when you're underneath the vehicle, you could really hear like a ticking noise right. Inside the exhaust system.

But it wasn't the exhaust because you could also hear it actually coming up from the engine. I think it was just reverberating through the exhaust and amplifying the sound. But the noise was loudest up in the valve cover sort of under the right bank cylinder bank, valve cover area. So we knew there was something going on, probably a valve train problem, cam shaft, lifter, valve, you know, something like that, where it needed further disassembly. Specifically removing the valve cover to find out what was going on.

Mark: So is that a fairly straightforward task?

Bernie: No, it's a Land Rover. It's a Range Rover. A Supercharged motor. Now it's not, I mean, a valve cover, you know, one time a valve cover removal was like I mean, I think there's some older Chevy's is like a 10 minute job to take a valve cover off maybe even five minutes.

If you have your tools beside you, but on these things, it's quite a lot of work. First of all, the supercharger has to come off and the intake manifolds. So that whole assembly has to come off. And then from there, the fuel injectors, it's a direct injection, they sit right in the middle of the cylinder.

Mark: Right. You got to cover off. What did you find?

Bernie: So we found one of the exhaust valves, there's basically two exhaust valves per cylinder. One of the exhaust valves. There's a huge amount of play between the cam lobe and the bucket, which is like the lifter. The thing that presses the valve down on the camshaft. Enormous amount of play, probably like an eighth of an inch like this, you know, you can them kind of look see you in the camera, you know, like quite a lot of play, a huge amount. So it's normally about 9, 10 millimetres is kind of the average specification. This is like, I don't know, I have a hard time converting an eighth of an inch to millimetres, but it was a lot. Very excessive. So we knew that's where our problem was. And from there we had to disassemble, remove the camshaft and go further into disassembling.

Mark: And was there anything else you found after the camshaft was removed?

Bernie: Well, I'll show you what we actually found to be the actual issue.

So our 2014 Range Rover. It's a full-size Range Rover Autobiography Edition, super nice. And the owners put some nice extra large wheels and tires on it. So for that even better look, it's kind of cool too get a carbon fibre hood as well. 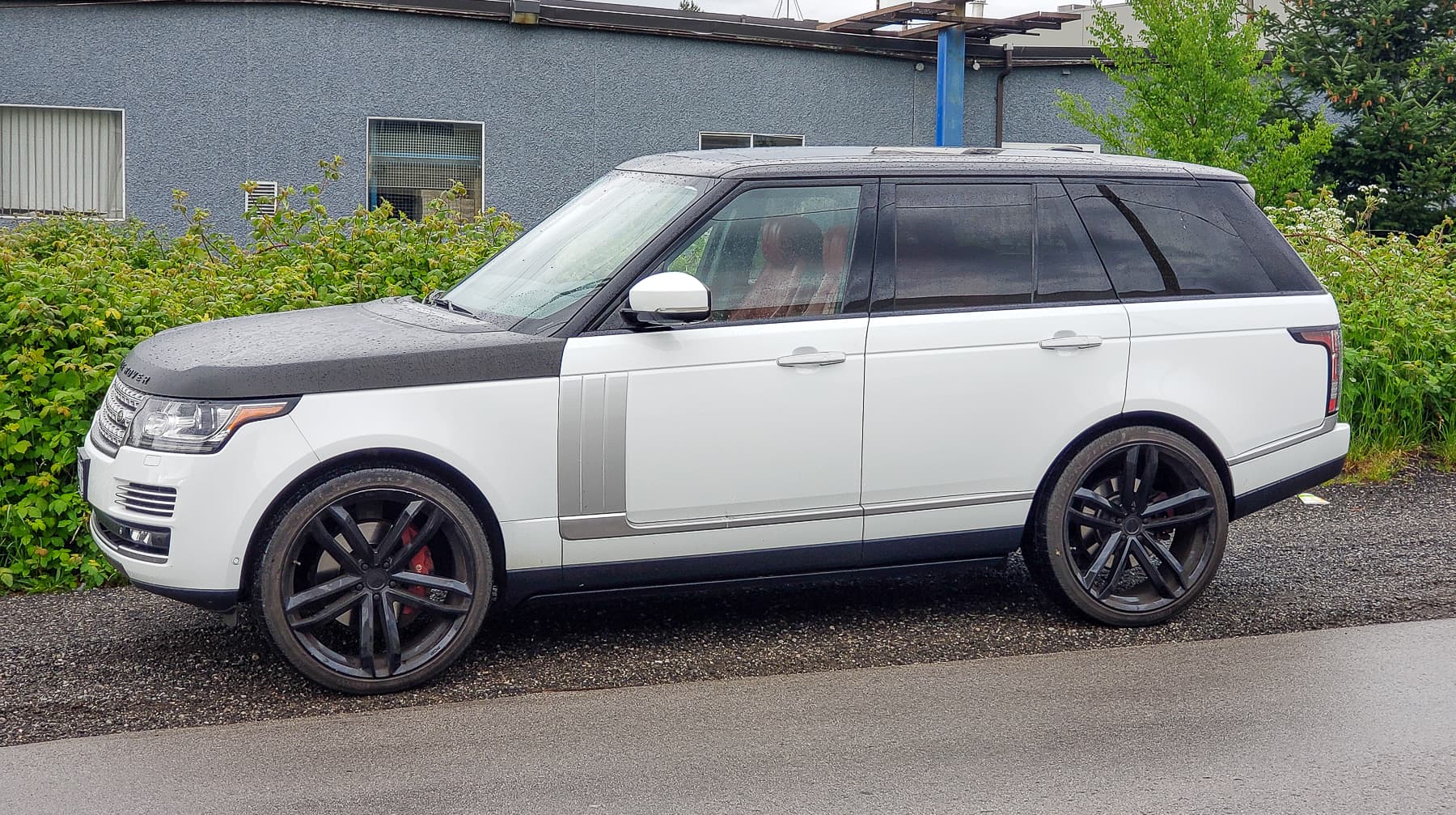 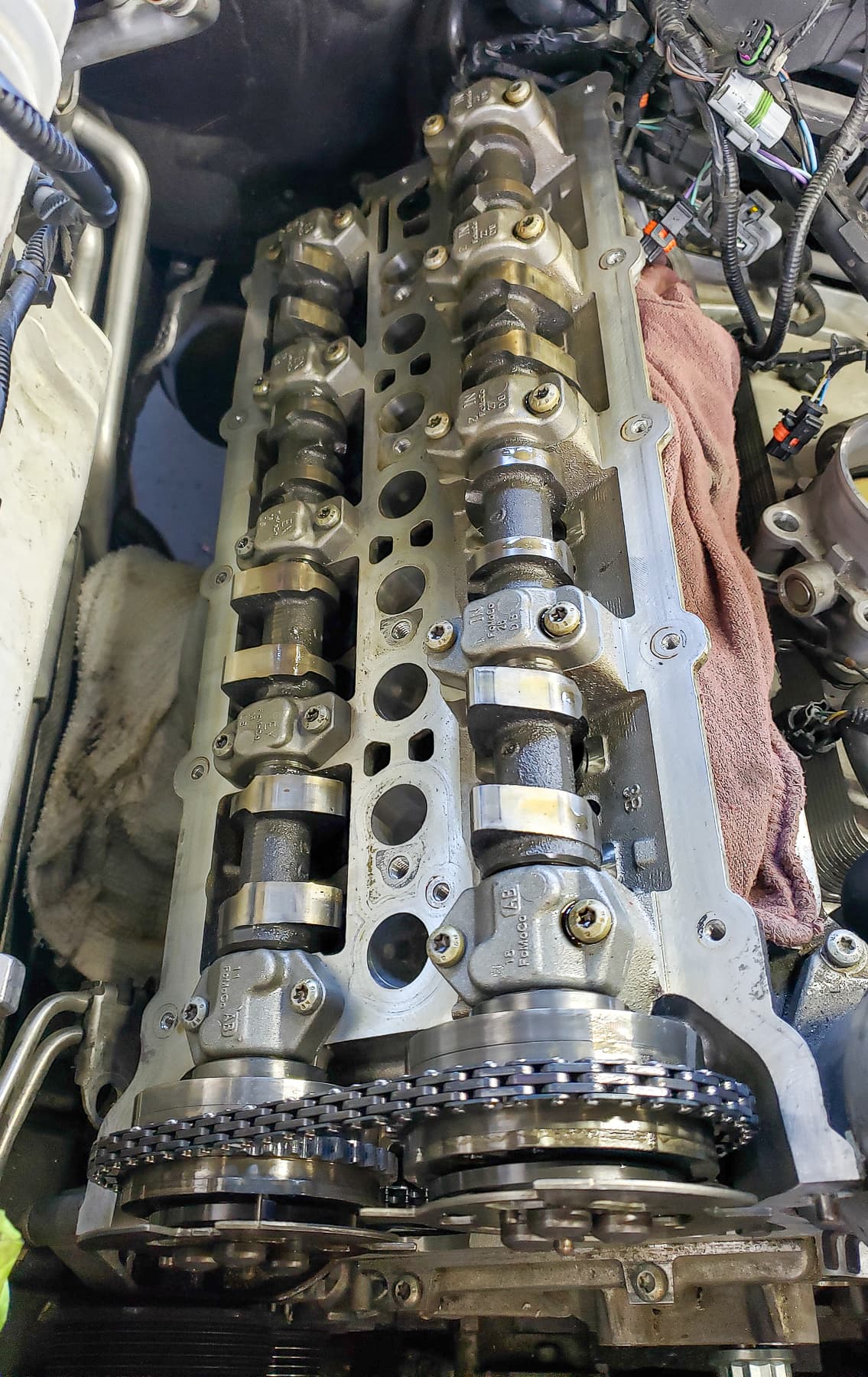 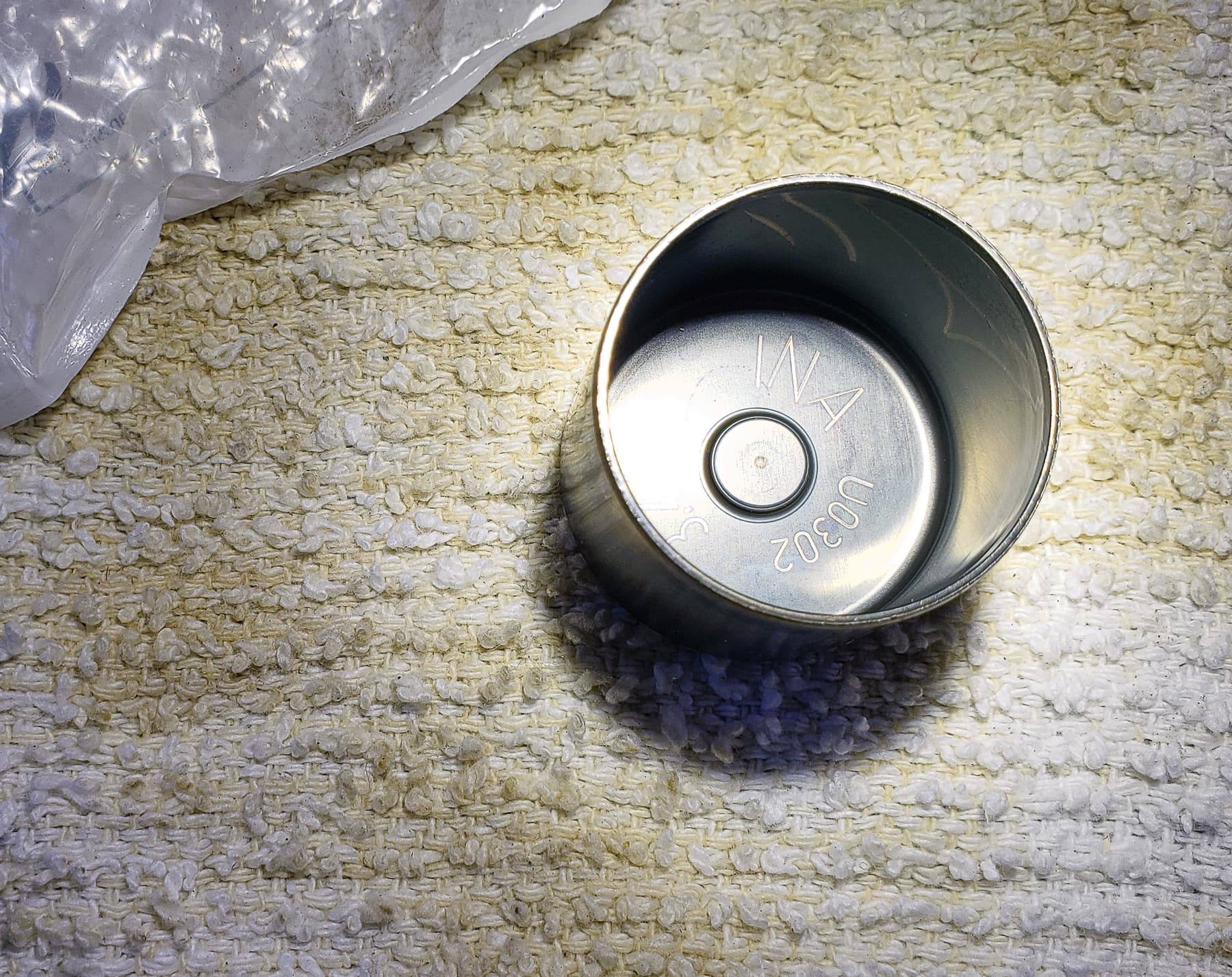 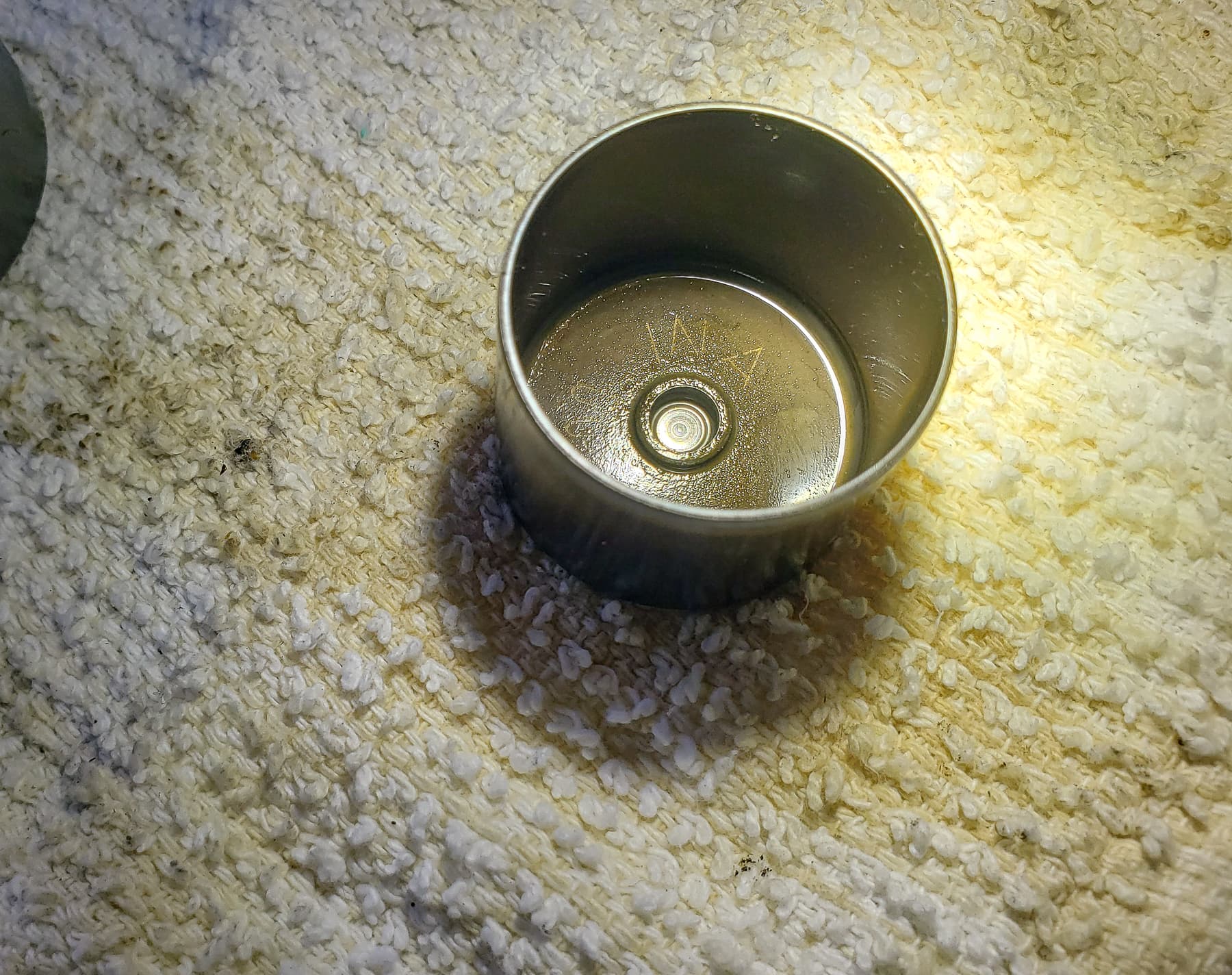 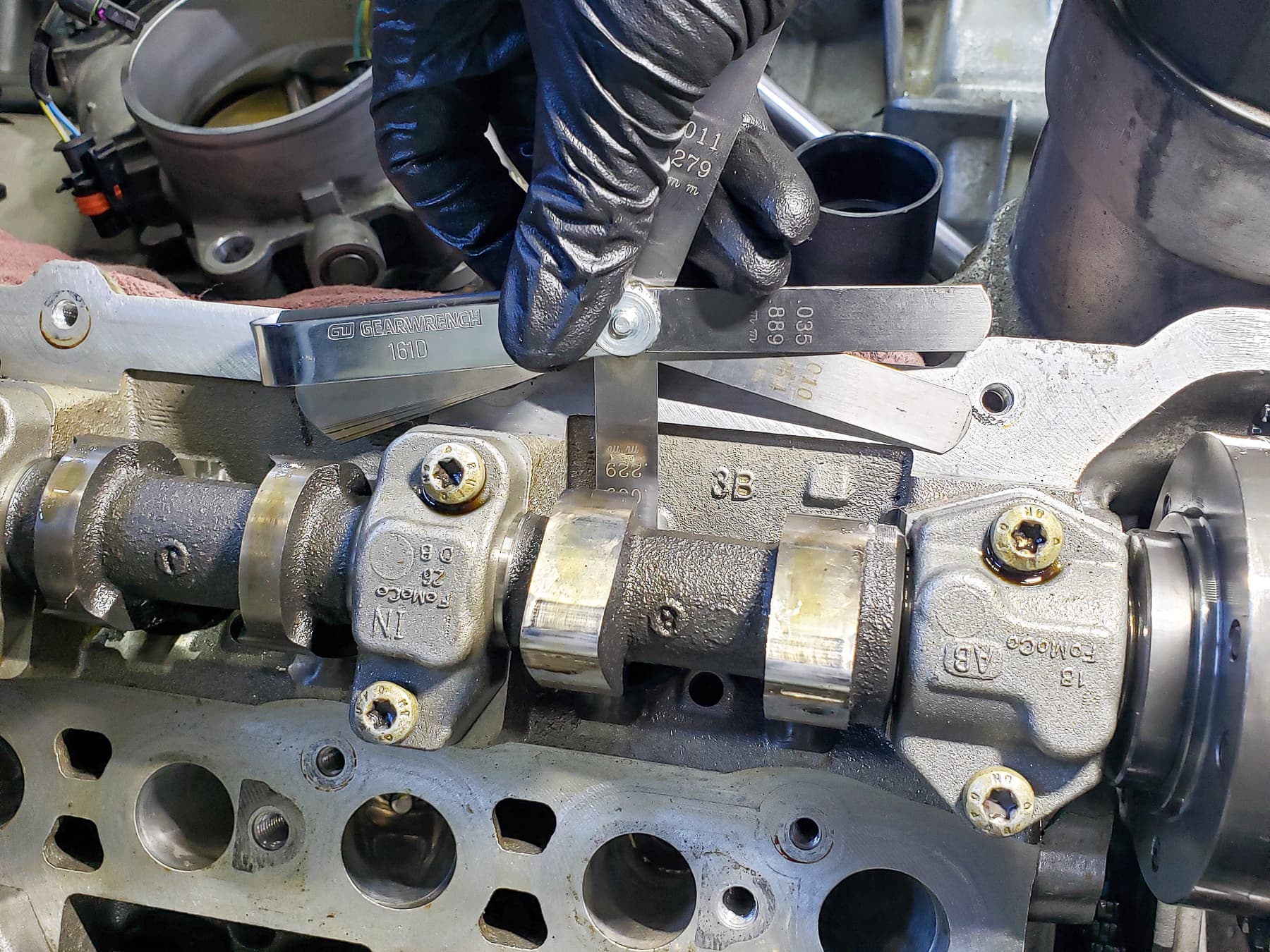 This is a brand new one. If you look really closely, you'll see a nice round piece here. And these are all very precision thicknesses, because this is how you adjust your valve clearance on this engine. It's a solid lifter. There are about 40 different, I'm guessing 30 or 40 different thicknesses. So you have to get them right. Put them in the right spot and measure them out.

This is what we found when we took the engine apart. You can see this centre piece completely gone. So there's our eighth of an inch of play. It basically just hammered out, I don't know what happened, whether that's a hollow piece and it hammered it out or what happened, but I'll just go back and you can see the good one  and the bad one.

So that's where our problem was. We measured everything out on all the other ones after repair. We went through and did a full valve clearance inspection. All of the rest of them were good. So we just repaired the one, which was the only thing going on. Now you might wonder, should we have done all of them?

This is the first time we've run into this and we've done numerous engine repairs on these vehicles. So we figured it was basically a one-off issue on this particular thing and all the other valves specked out perfectly well. So there's our picture show of the day.

Mark: So I'm sure while you had everything apart, you had a look at the timing chains in the Supercharger. How were they?

Bernie: Well, we actually end up replacing all of them. Actually we're kind of surprised because the timing chains are all actually in good shape. There was no play. We talked to the owner and he said, look, I've owned this thing since brand new, had about 130,000 kilometres on, he says I've never had them replaced.

Like the engine has never been opened up. So he was keen to replace them because he knows it's a problem while it's in there, it's a bit more money for parts, but the labor is not really any more involved. The Supercharger nose cone, like there's a coupler that connects between the pulley and the actual supercharger.

That's the, where the problem lies with the nose cone. And there was some play in that, even though it wasn't really noisy, we replaced that too, because again, everything is apart. Why not do it while it's apart? Little more money for parts, but, you know, saves having to do it again in a few months.

So everything's done, complete. The end of story, it sounded great. Like the engine runs beautifully. Sounds really good. Like not any noise. Really nice.

Mark: So do you have any idea on why that part failed?

Bernie: No, I don't. I mean, at first we thought, well, maybe bad maintenance, because a lot of time, you know, it's easy for people to miss an oil change. These are the kinds of things that happen. If you, have not even decided you just get forgetful and you miss an oil change or the warning light comes on, says service the vehicle. They should get it done right away because you know, don't wait. I mean, I say right away, get it done within a week or two. But don't wait for a month or two, or if you've missed something. It's better to service it even before the warning lights come on if you can kind of track it. You know, go, okay I'm just going to change my oil every 10,000 kilometres. It prevents a lot of stuff from happening.

This engine didn't look abused in any way inside. It didn't have any sludge buildup. So, I don't really know why it could have just been a faulty part or something that just wore, for some reason, things do happen. I mean, even in well-maintained cars, sometimes things just break and wear out.

So good maintenance is a good prevention. It's like eating good food, you know, will generally extend your lifespan and keep you healthy, but it's not a guarantee.

Mark: And of course, any Supercharged high performance engine, and this definitely is in that category needs to be maintained appropriately.

Bernie: Absolutely. I mean, these engines are under an immense amount of strain. When you think of the weight of this vehicle and these things like take off like a rocket. I mean, they are super fast, you know, there's over 500 horsepower in this engine. It's a lot, and it's fun to drive for a vehicle like this. But there's an immense amount of strain on an engine that can go from zero to 5,000 RPMs in a second. That's a lot of strain. So things have to be in good shape.

Book online at pawlikautomotive.com. There's also hundreds of videos, many about all the different normal issues that you might have with your Range Rover Supercharged or not. Of course, if you want to call somebody and talk to them, (604) 327-7112 to book an appointment, you got to call, he got a call and talk to them.

They're busy. You can't just show up. But of course, this is just talking about Vancouver. We appreciate everyone who watches these shows. We really enjoy making them. We've done it for nine years. We've got close to a thousand videos out there all makes and models and types of repairs. And thanks, Bernie.

Bernie: Thank you, Mark. And thanks for watching. And don't forget, you can book online too, new service works really well.