Mark: Hi, it's Mark from Remarkable Speaking of here with Mr. Bernie Pawlik, Pawlik Automotive in Vancouver, BC, Canada. Vancouver's best auto service solution, and we're talking cars. How are you doing Bernie?

Mark: So we're going to talk about a 2014 Smart EV that had some brake repairs. Brake repairs? I thought EVs brakes didn't wear out what was going on with this Smart car?

Bernie: Well the answer about EV brakes wearing out is they do wear out, if you don't take care of them and service them. And that's what we're going to show you in this podcast. I think actually this is the second Smart EV we've had that's had exactly the same brake issues. So if you own one of these call, book an appointment. I'm going to say this, if you're in Vancouver, call, book an appointment, have your brakes inspected and serviced because that's really the key to long life with these things.

So anyways, what was going on with this vehicle is that the brakes were making some noises. We did an inspection as we always do, and found a couple of issues with the brakes. One of the rear brakes was kind of sticking when you turn the wheel, it was a little tight, they use drum brakes in the rear of these cars. And on the front you can just hear a scraping sound with the front brakes and they were basically rusted really badly. So you can keep asking me questions and I'm going to just start showing pictures.

Mark: Sure. What did you find was worn?

Bernie: Well, what we found was worn, and here's the beautiful little, cute little Smart car, by the way. I like these things. I don't have often good things to say about Smart cars, but the EV versions of these are really fun to drive. And I think they work really well. Let's have a look. 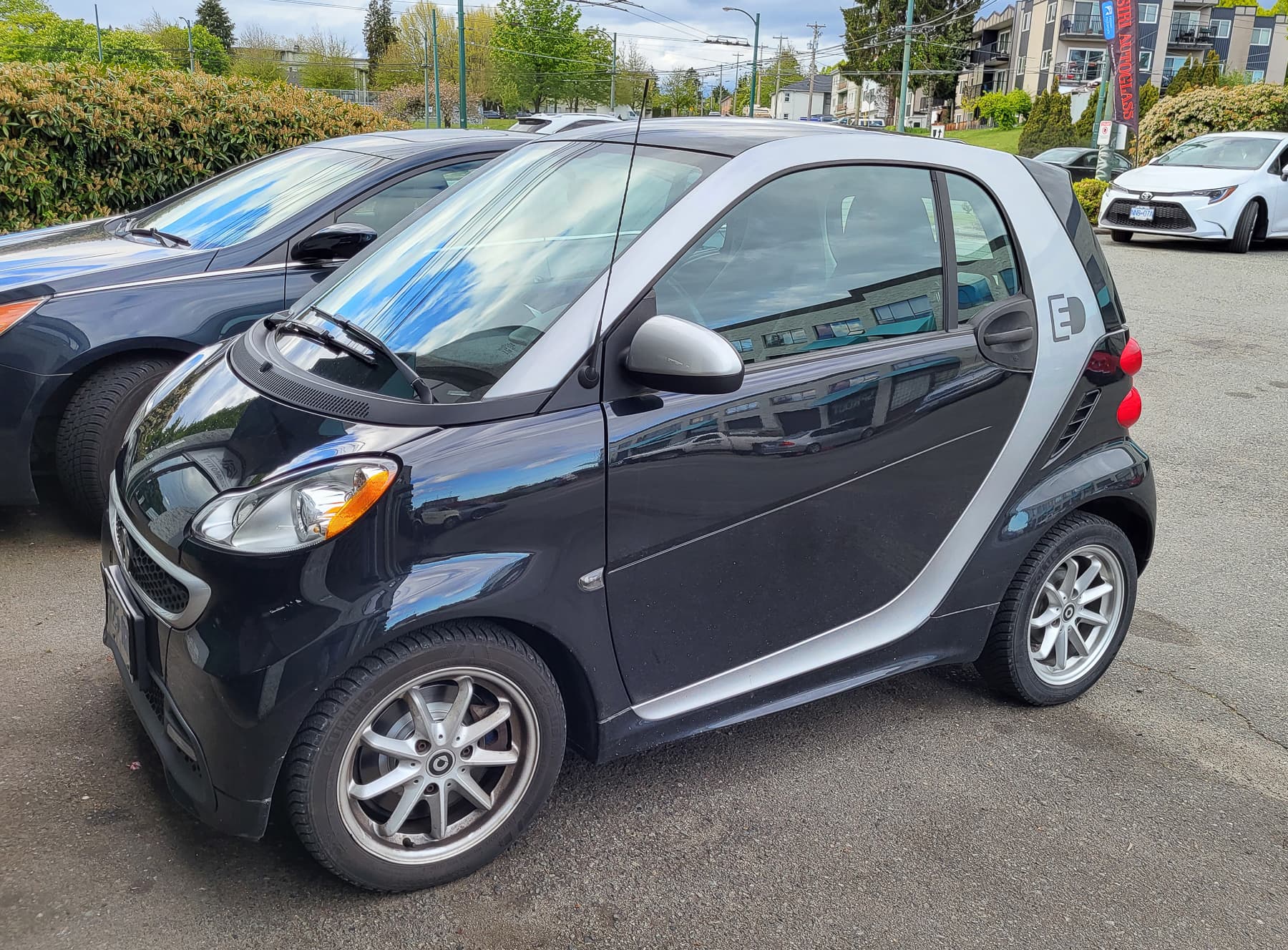 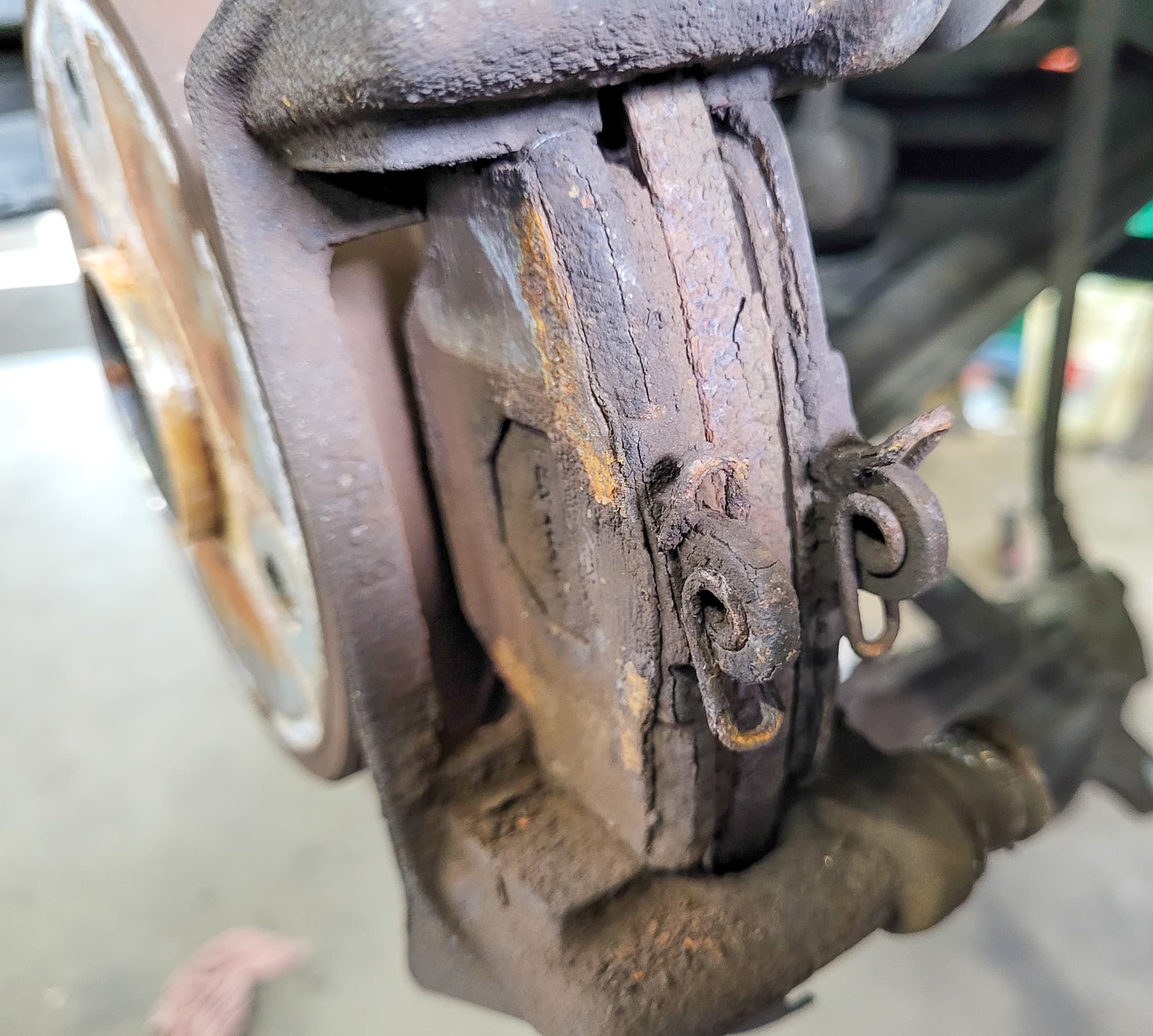 This is what we found with the front brakes. I love showing these kind of pictures because you can just, you know, if you don't know what brakes are, it's hard to even see what parts are what because it's so badly rusted. So, you know, this vehicle is probably never had any brake work. It's never had the brake service. They've never been looked at, person has just been driving it. The brakes eventually of course, corrosion builds up, the pads seize, and they just start wearing out really fast and it just kind of spirals downhill.

These are where I'm moving my mouse pointer here, these are the brake pads. The outer, the inner and this thing in the middle is the brake rotor. So all very rusted, very corroded. Shouldn't be like that, if you were to do proper maintenance.

Our next picture here, this is a view of the actual pad slider. So this is on the brake caliper bracket, the caliper squeezes the brake pad brake. The brake pad's sitting here, and now you can see sort of a polished area where the brake pad was sitting, but all this area is all corroded, rusty. There's no lubrication whatsoever. And this is why the brakes, among one of the reasons why they wore so quickly. And one of the things we do in our shop as part of the service is we have a sandblaster. So we take these things. Now, if the calipers are seized we will replace them. That's the piston end of it. But if they're not, and typically they're not, we can service them and clean them. 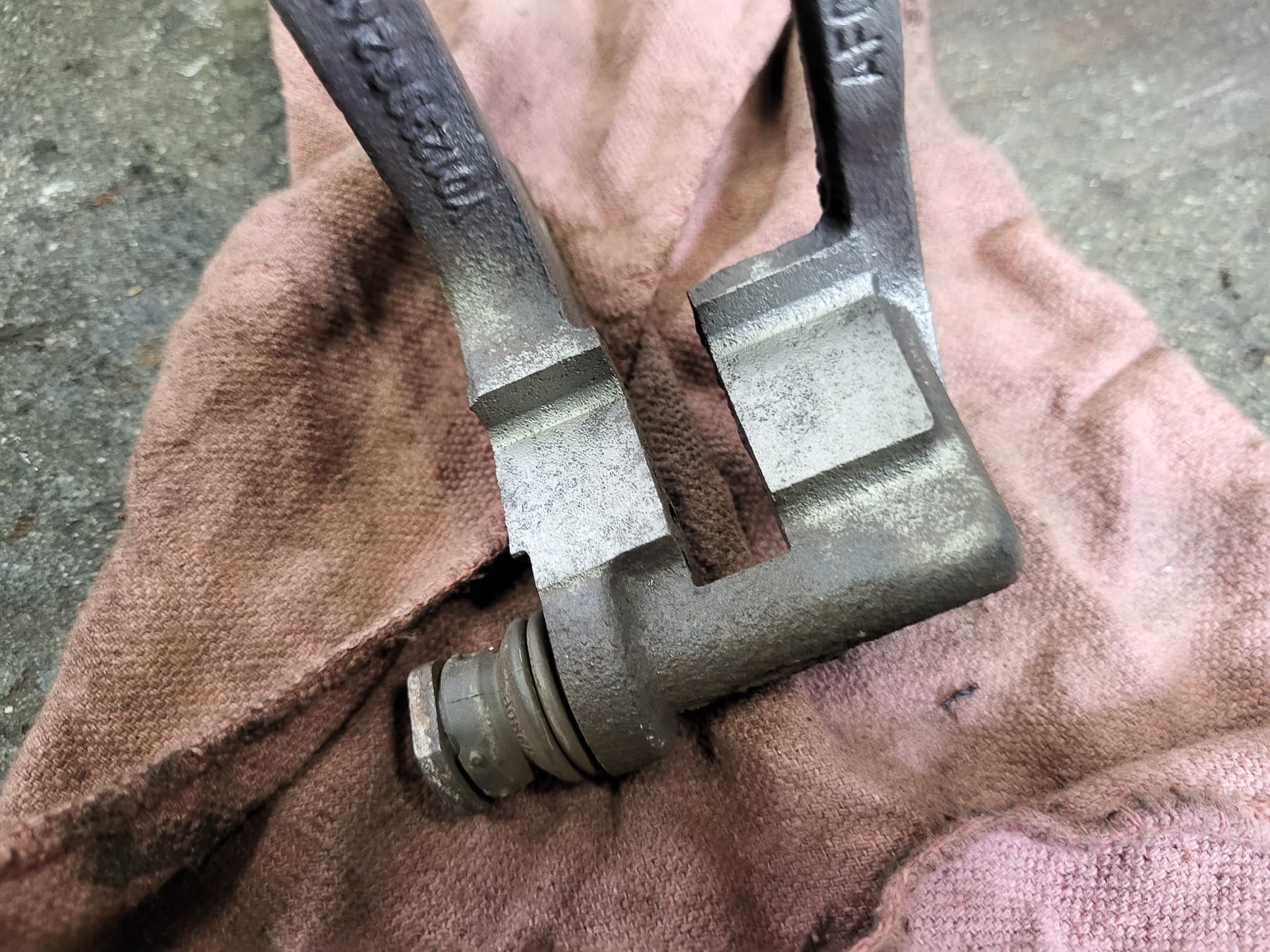 So this is after it's been through the sandblaster. That's the same part we just looked at. I'll just show the comparison.

That's that. After sandblasting, it looks like that. Looks like brand new, basically. So not all shops have sandblasters, this is one of the things that we do. Now you can remove that corrosion without a sandblaster, but it'll never look as good as this will. And you know, it'll still be effective, but just not as good of a job. So the other thing we do, inside here, there's a pin, there's a rubber seal, there's a shaft that goes inside here. We take that apart. We clean it. We lubricate it, replace a lubricant when necessary. So that's the front brakes.

Now the back brakes. So I mentioned the back brakes were kind of sticking and what we found was that the parking brake, this is a brake shoe for the back. And this little arm here is for the parking brake. And there's a little pivot pin here. This, again, hadn't been serviced in a long time. These back brakes didn't look nearly as ugly as the front because they're kind of sealed inside the drum. But, this basically was seized up. So when you pull the parking brake on, and then you let it off, it wouldn't release the brake properly. Now, fortunately, we caught this early, the brake shoes weren't worn badly. It was just slightly sticking. So we basically put this in a vice, we free it up, lubricate it, and it's good to go. 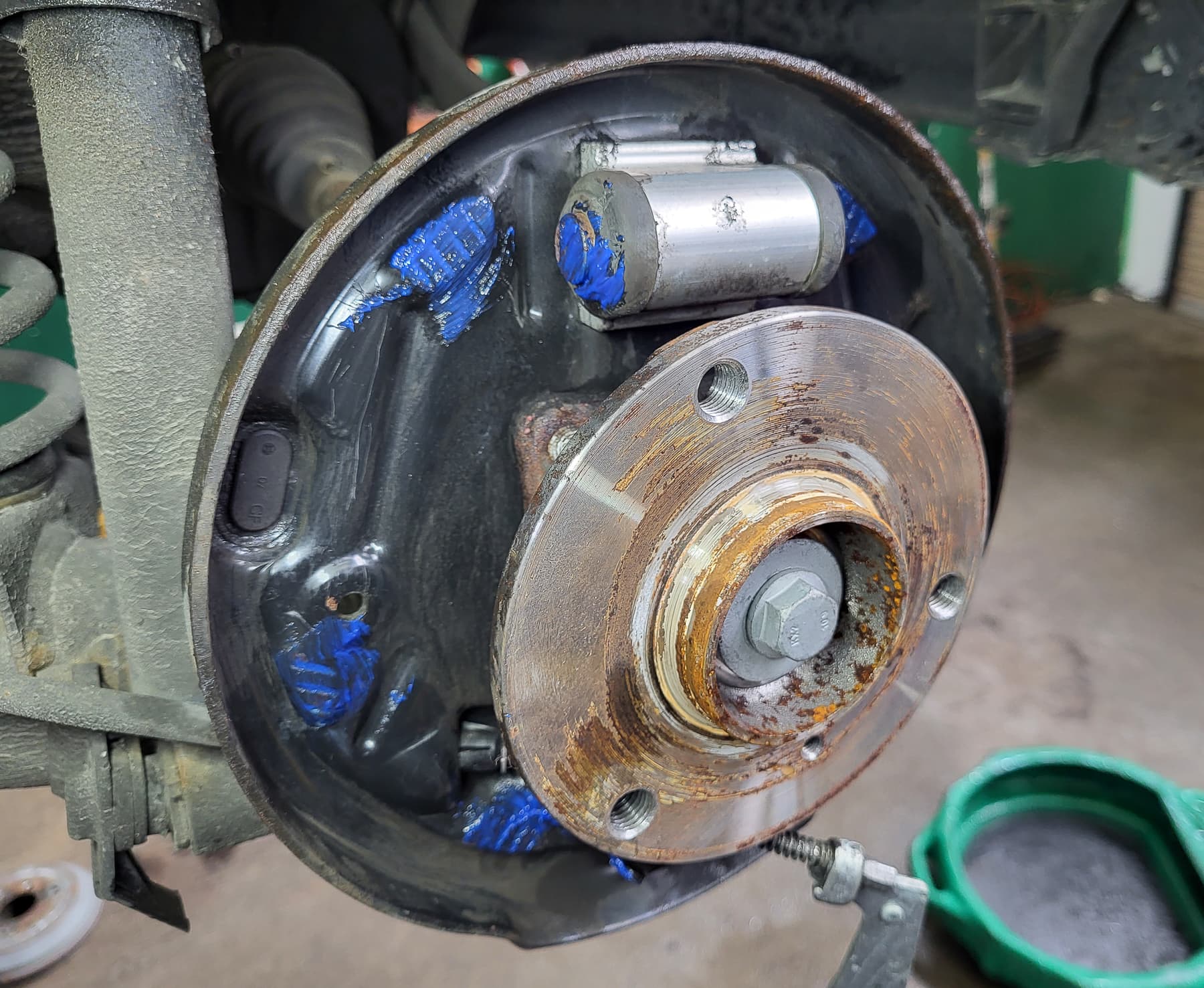 So when we service rear brakes, we basically take them off. This didn't require replacing the brakes. The drums were in good shape. The shoes were still very thick. The wheel cylinder, which is this component here was not leaking. So we basically take everything apart. We basically wash out and clean all the dust, wire brush it, clean this areas here where the little blue is applied. These are where the brake shoes slides. We apply lubricant to these areas. There's an adjuster. We clean that. We lubricate that. 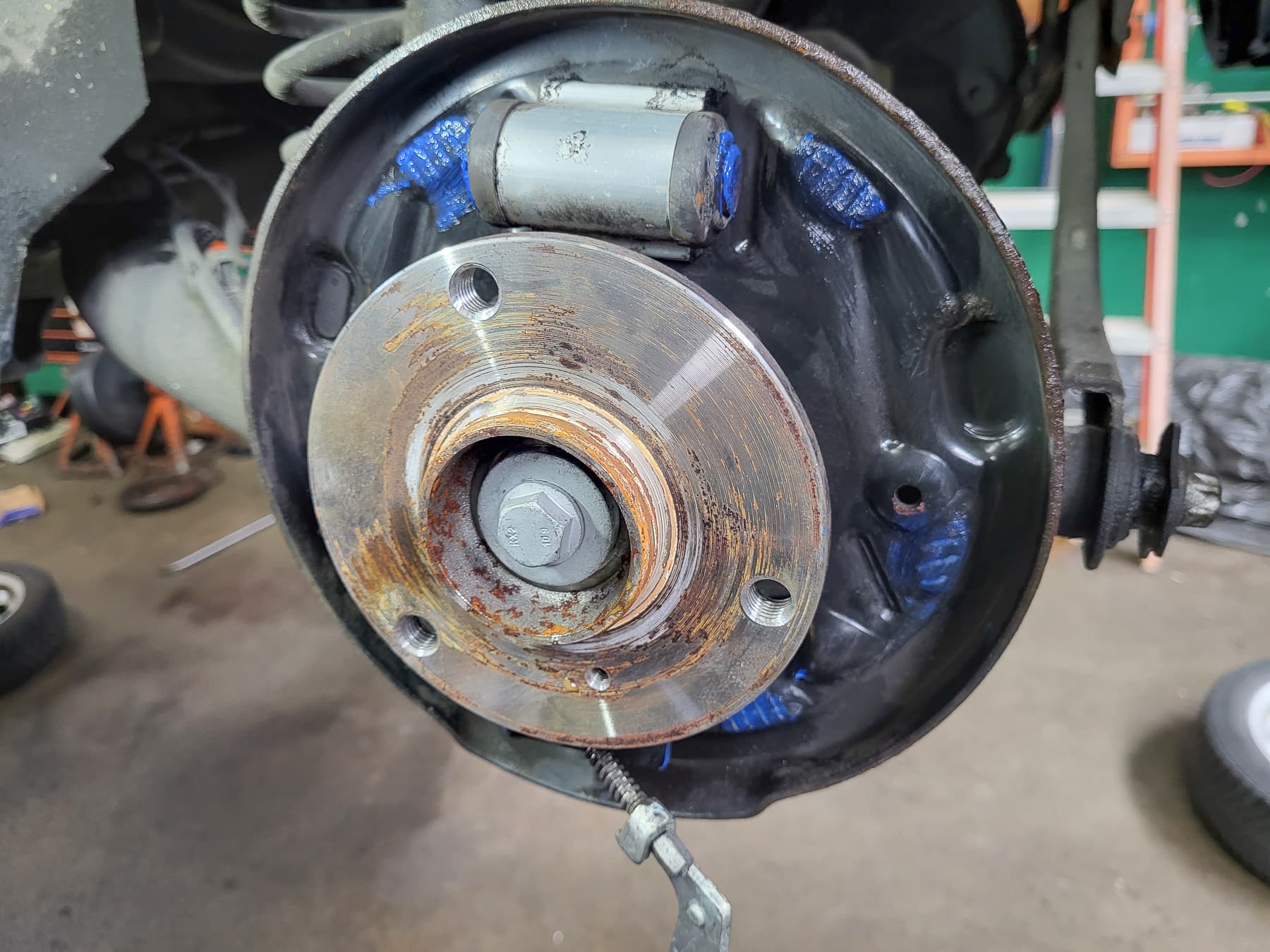 Have another view of the brake shoe, this is the backside of the the same view. And then finally with everything put back together. 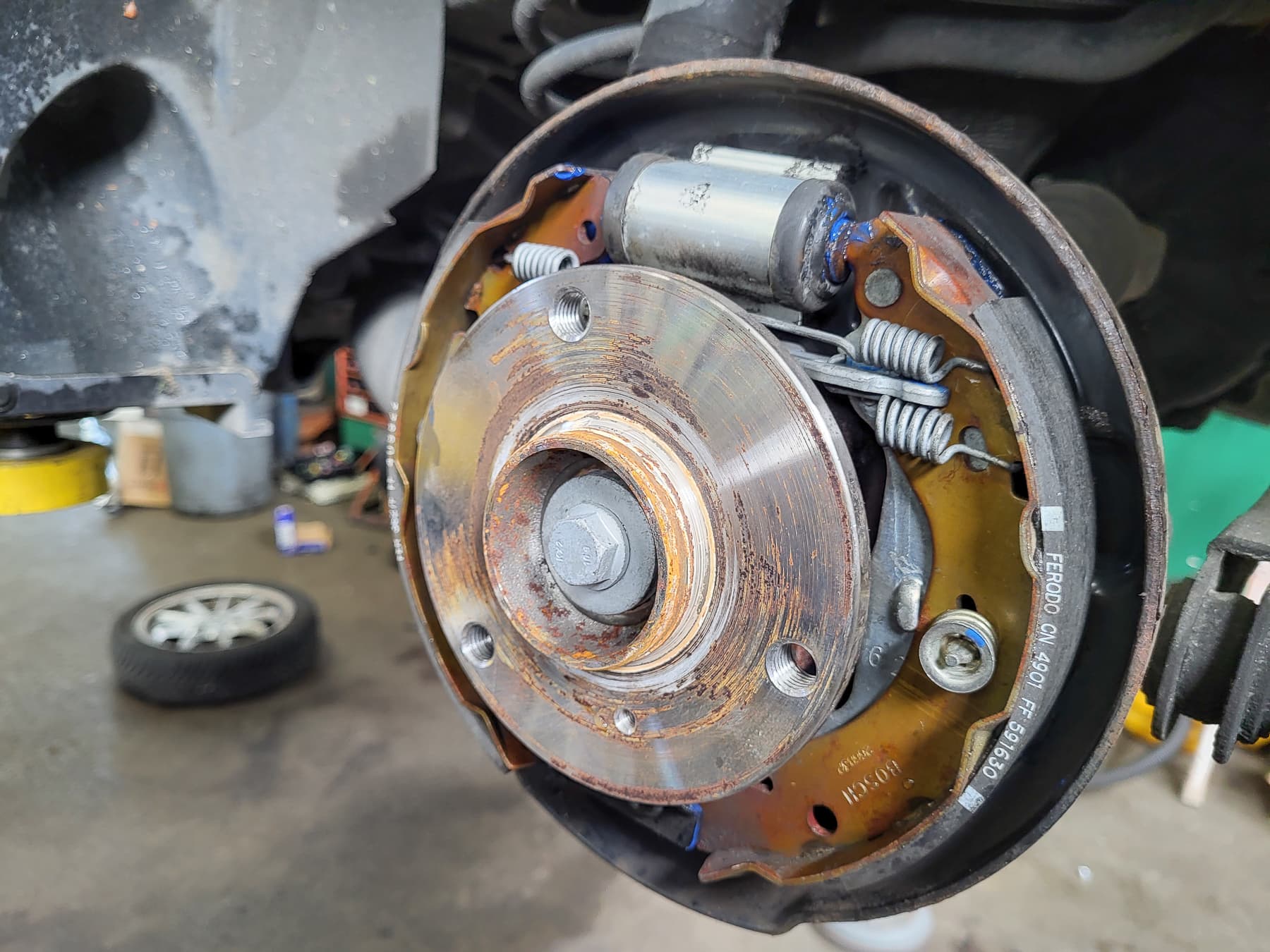 These are the original brakes, as far as I can tell. And you know, again, they're in good shape. Being an EV, it uses the regenerative braking from the motor. So the rear brakes aren't taking as much wear and they're drum brakes, they're not as efficient as the front.

But you know, the Smart car is kind of unique because it's got the motor in the rear. It's got drum brakes in the back, so the front wheels are not driving the car. So they're not getting exactly the benefit. They're actually working a little harder than they would on say a lot of other front wheel drive type EVs. Anyways so that's the rear brake service done. Complete. You know, afterwards of course everything all moves. And you say this looks brand new, but these are actually used brake shoes. So these are the kinds of things we do. And that's kind of showing the quality of the service we do when we do a brake service and brake repairs.

Mark: So let's talk about this in a little detail here. So why would it matter terribly to not do this? Not run it until it's absolutely screwed basically on the front, because the EV does have remarkable stopping power with just the electric motor. Not necessarily stopping but are slowing down. But clearly with using just even just the back brakes, the car is going to get to a stop, unless you had a real serious emergency. And it's a Smart car. You're not bombing down the road at a hundred miles an hour. So what's the difference between maintaining it and not just running it until it dies basically on those front brakes?

Bernie: Well, that's a good question. I mean, okay, it's a 2014, the car's like, you know, it's like eight years old at this point. It's like, who cares? It's like, it's a cost. But I think over time, I think having a car that you know, where you don't have to come in and go, you know, the brakes are making horrible noises.

If you do regular maintenance. Let's say after like two to four years kind of interval, we have the brakes inspected, cleaned, lubricated. These pads would probably still be in working order. And so, yeah, you're going to be spending some money in the interim, but then you're not going to have the grief and stress of, Oh the brakes are doing something bad. You know, had this owner driven it longer, it would've worn things worse. Probably would have had to replace the calipers because things get overheated and damaged.

Sometimes it's about peace of mind and just knowing that you're operating things. And of course, when the brakes are like that, they don't have as good stopping ability. I mean, you may not notice it. But it might be that panic stop in the rain where a child runs in front of the car. It's like one of those things that they'll probably never happen in your life, but if it does and you didn't stop, and you killed someone, it would suck. Plain and simple. Or you might slam into the back of a truck. You never know sometimes.

So the other thing too, is that when road conditions are not great, I mean, I've driven on the road where I slipped on some oil. Like there was an oil slick on the road. It's frightening when something unforeseen happens. And you know, if all of a sudden your front brakes don't work or your back ones lock up or something, it can cause some bad stuff. So it's better to make sure that it's all in good shape.

Bernie: I think that's a trap of EVs. I mean, the great thing about EVs is you don't have to get oil changes done. And then a lot of modern cars, they have tire pressure monitors. So, I mean, honestly, I'm kind of lazy. Like, servicing a car sucks. I mean, it costs you money and time. And it's nice if you can just hop in your car and just keep driving. You know, with a lot of modern cars, Hey, oh, the tires are low on air. The light will come on in the dash telling you. So you can go for a long time until stuff happens. But you're smart because we're talking about Smart cars, to have it inspected every couple of years.

Once the car gets older, have it inspected every year. Have the brakes looked at. Have the steering suspension looked at. The car won't tell you it needs some things. Even when a lot of these brake pad warnings go off, you could have saved yourself some money by going, you know, having it done sooner.

Mark: Absolutely. If you need some service for your Smart EV or any EV, they're experts in all of them, even Tesla. They repair all of these vehicles. The people to see in Vancouver, BC, Canada are Pawlik Automotive. You can book online at pawlikautomotive.com or you can call (604) 327-7112 to book your appointment. You have to book ahead. They're always busy. Check out the website pawlikautomotive.com. There's many articles on there over thousand on all makes and models and types of repairs. We've been doing this for over 10 years and you can check out our YouTube channel. Pawlik Auto Repair. Thank you so much for watching and listening and thank you, Bernie.

Bernie: Thank you, Mark. Thanks for watching. Thanks for listening. It's greatly appreciated.